At this year’s Dubai Design Week, the Abwab exhibition showcased the work of more than 40 regional designers who use objects to blend the past and present of their countries

“Jaba’ is more used to industrial glassmaking, so this was a challenge,” explained Palestinian architect Dima Srouji, pointing at the stuff of Murano’s id. Her joyful Hollow Forms collection was the result of a mix between her 3D design skills and the collected seven-century know-how of glass artisans in the West Bank village. “The aim is to look back to move forward [and] produce objects that will resonate with a sense of place, while maintaining the ability to act on a regional and global level.”

That is also, in a way, the aim of Abwab, an exhibition born alongside the Dubai Design Week. Its third edition, which took place in mid November, showcased the work of 46 up-and-coming designers from the Middle East, North Africa and South Asia, with pieces ordered by common themes —Interpretation, Tactility and Nostalgia, for example— instead of common nationalities.

Abwab is the Arabic word for doors, and fittingly, it aims to open them for young designers hailing from the MENASA region. Judging by the critical success of the show’s two previous iterations, it’s succeeding. “There are very few opportunities for people to tell stories the way that they can here: we’re talking about production techniques, really articulate forms of craftsmanship and machine work, people blending who they are today with who they were in the past,” explained interior architect Rawan Kashkoush, Abwab’s creative director and the show’s curator.

“I think she was talking about us when she said that,” half-joked Mounia Meftah, part of Moroccan duo Maison MEFTAH. Their Unité brass lamp, made with intricate arabesque openwork, is the result of five years of reflection, one and a half years of specialised training and 1,600 hours of dedicated work from a small group of Moroccan goldsmiths. Ilyas Meftah replied to the artisans’ questioning of the feasibility of the design by introducing saws meant for jewellery making, capable of making holes as small as a quarter millilitre wide, even through copper. “[Rawan] told us that this piece deserved the space and time of an exhibition like this one to explain all the hours spent on this bit of chemistry between contemporary design and the ancestral know-how of our artisans,” Kashkoush added.

That chemistry —what the curator calls “crazy explosions”— is also present in works like Kawther Al Saffar’s bowls made in conjunction with Kuwaiti craftsmen and Sema Ourouk’s Muquarnas lamp, an interpretation of the traditional Islamic architecture element. This selection is not meant to celebrate collaboration for collaboration’s sake, but instead it questions the region’s current need for cultural and commercial imports. “There’s often an interest to go to the veterans, rather than rely on local groups,” Kashkoush explained. “The Middle East is transitioning in terms of contemporary taste, and there are fewer Middle Eastern designers servicing the way we seat, the way we eat, the tableware we use. We grew a tendency for purchasing these things from farther away, but those designers are now finding that they need to make room for people like us, who can design with our own flavour.”

And therein perhaps lies the biggest value of exhibitions like Abwab: with these proposals, the local scene is fiercely pushing for the room and the visibility to allow the country and the region to create their own contemporary veterans. 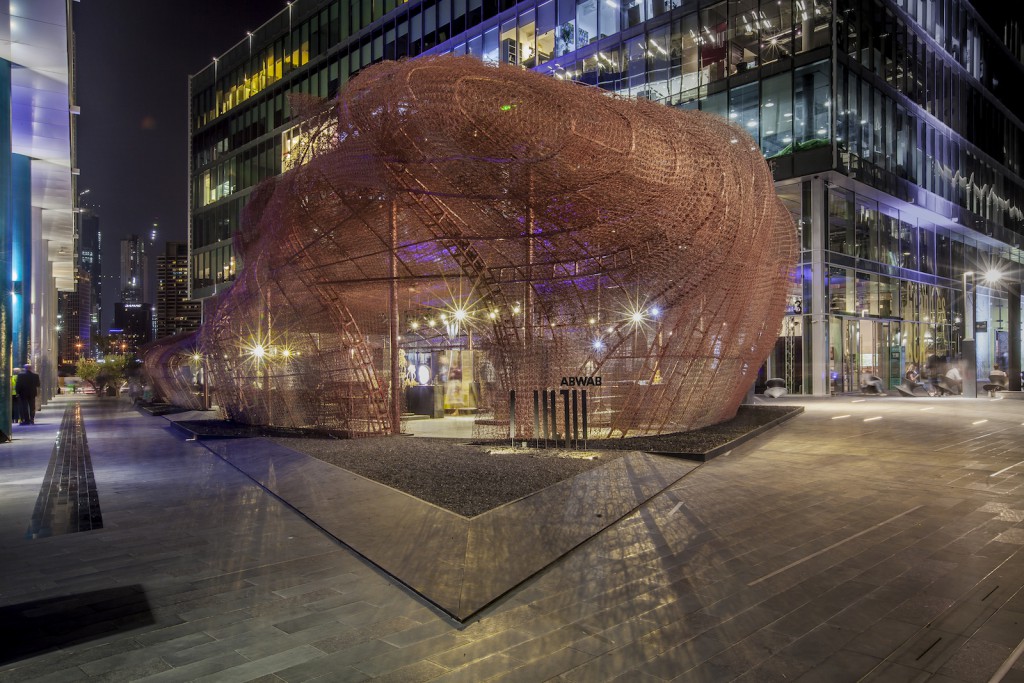 THE VENUE The Abwab pavilion is an architectural investigation of locally sourced materials designed by Dubai-based firm Fahed + Architects. 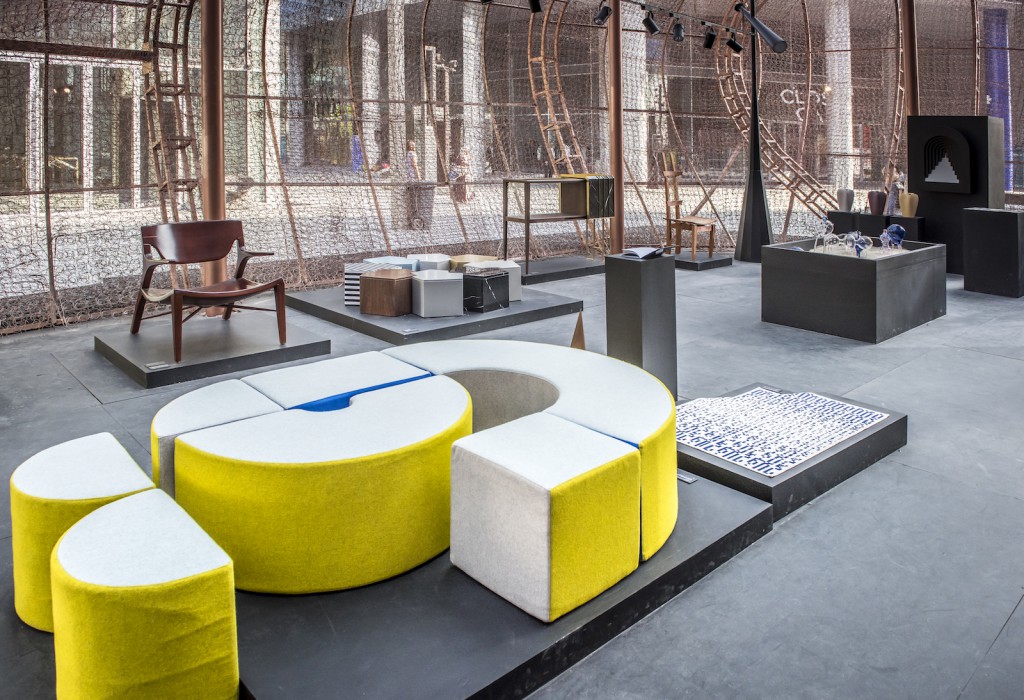 THE MATERIAL The pavilion skin is composed of bedsprings borrowed from environmental management company Bee’ah. 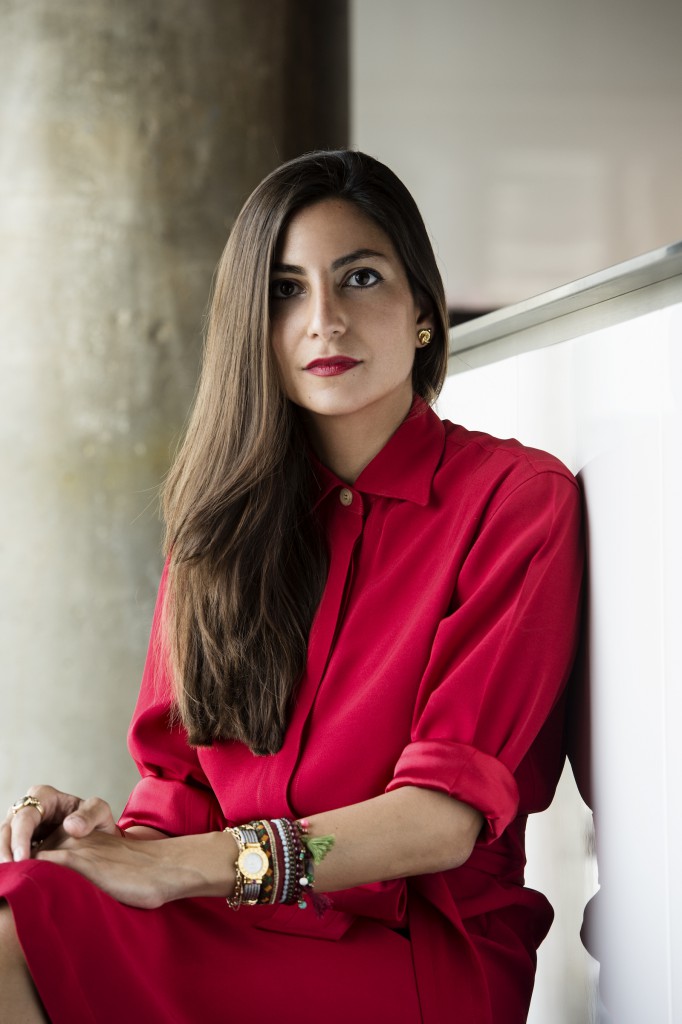 THE CURATOR  Rawan Kashkoush is responsible for Dubai Design Week’s regional projects and knowledge exchanges —including the curatorial activities of the Abwab pavilion. 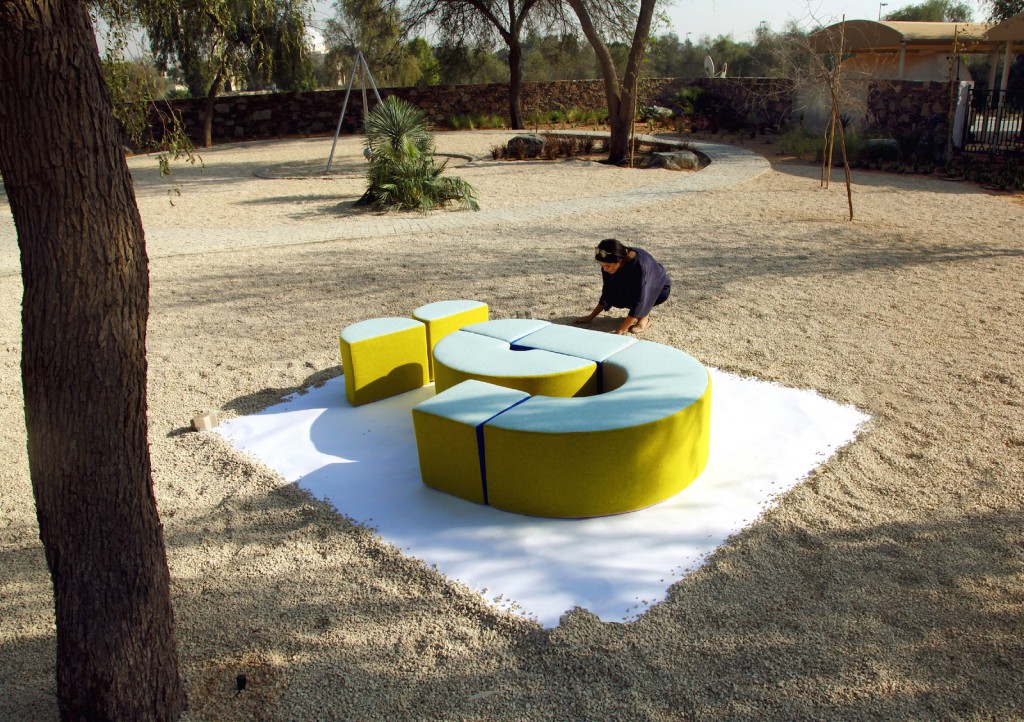 LUJAIN ABULFARAJ - DHADH Dhadh can be a plaything or a piece of furniture, but mostly it’s an homage to a letter of the Arabic alphabet, and comprises eight unique modules that can be combined and recombined to create all 28 Arabic letters. 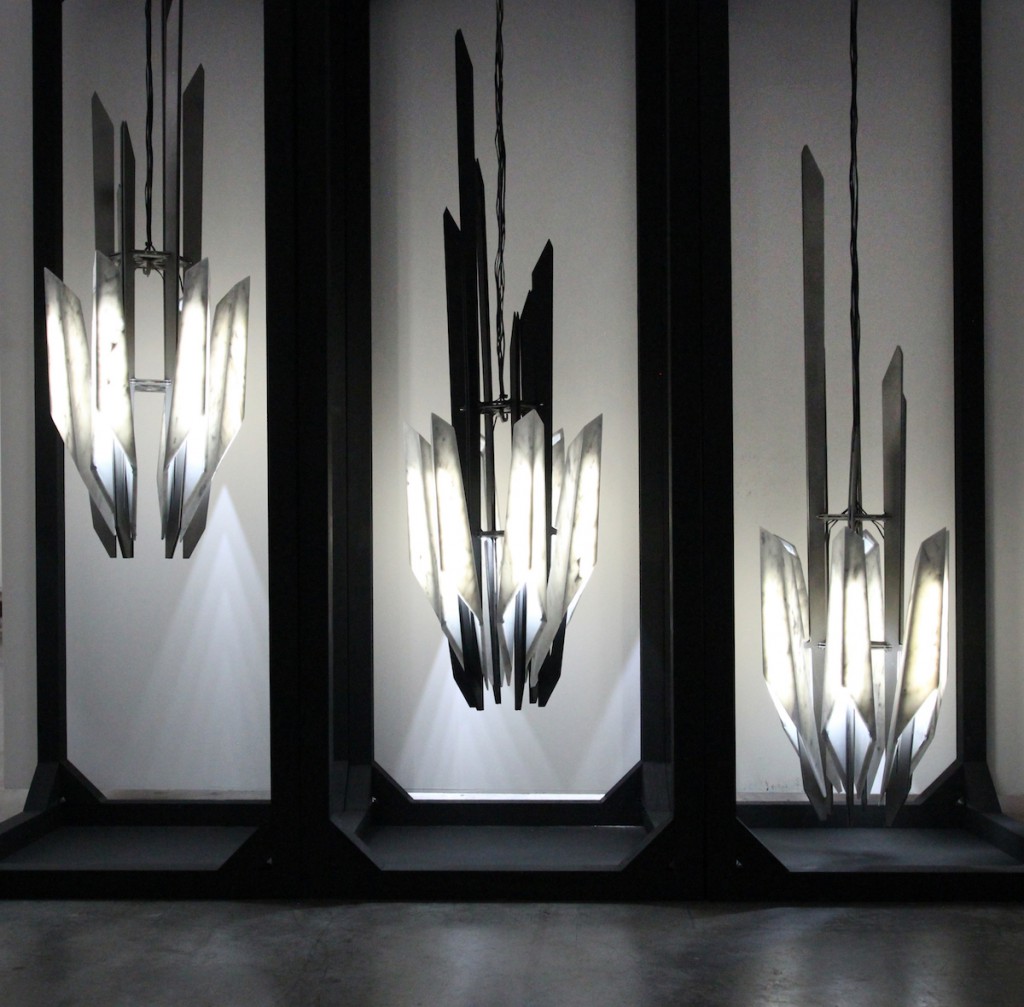 SEMA OROUK - MUQARNAS This piece is a manufactured iteration of the traditional muquarnas, a type of corbel formed from small pointed niches stacked in tiers. This architectural element was employed as a decorative device in traditional Islamic architecture. 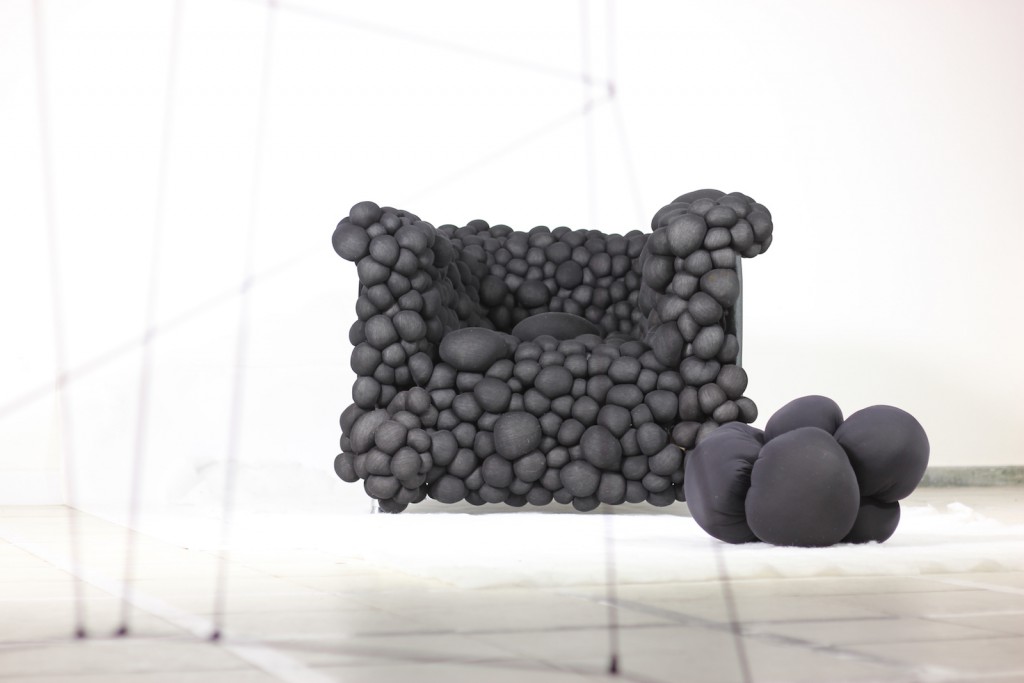 MEHDI KHESSOUANE - BLACK TUMOUR CHAIR The Black Tumour Chair is a comment on humanity’s hubris and its quest to build a civilisation at the expense of ecological harmony —with oil spills, nuclear radiation, pollution and coral bleaching. 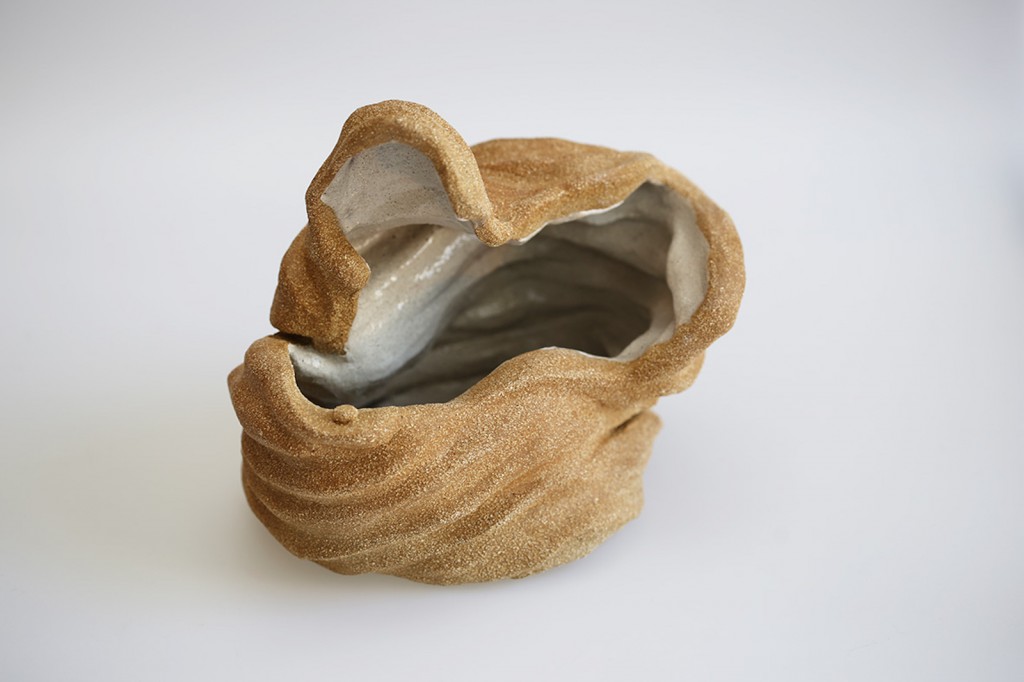 ALI SHAWWA - GOSSIPERS SCULPTURES Ali Shawwa attempts to recognise the integral role gossip has played in cultural connection through a series of sculptures that attempts to challenge notions around the act of gossip, mixed with the sand dunes, abayas and Arabic coffee cups of Middle-Eastern-style chit-chat. 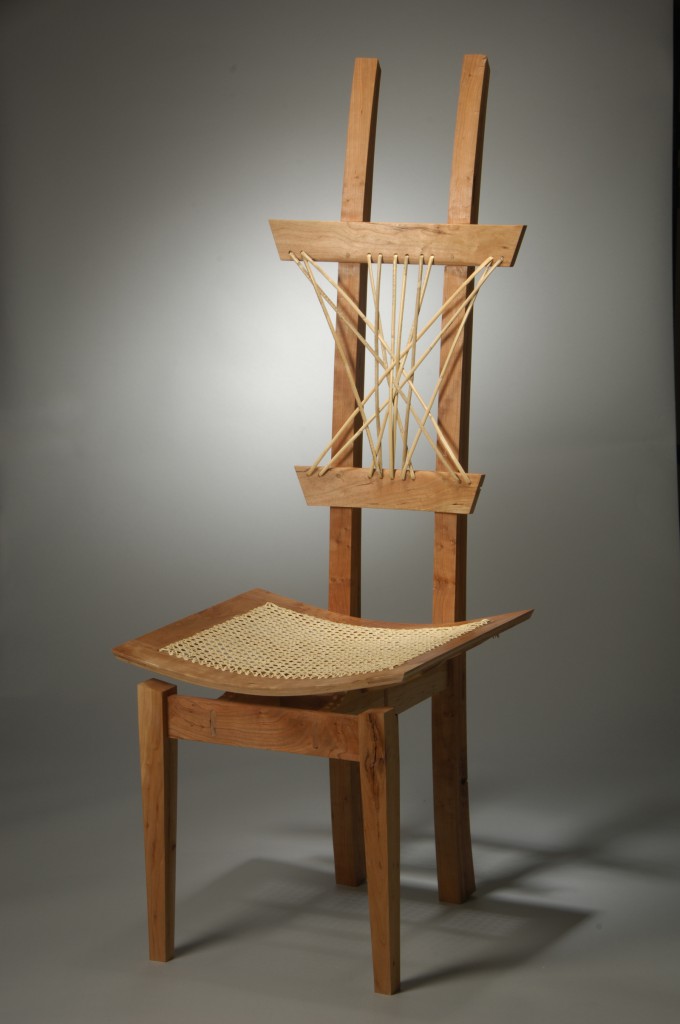 JASSIM ALNASHMI - CULTURE CROSS This chair merges the cultures of the East and the West with a modern-day dining ethos —it combines the curve often found in Chinese architecture with the taper of Islamic calligraphy. 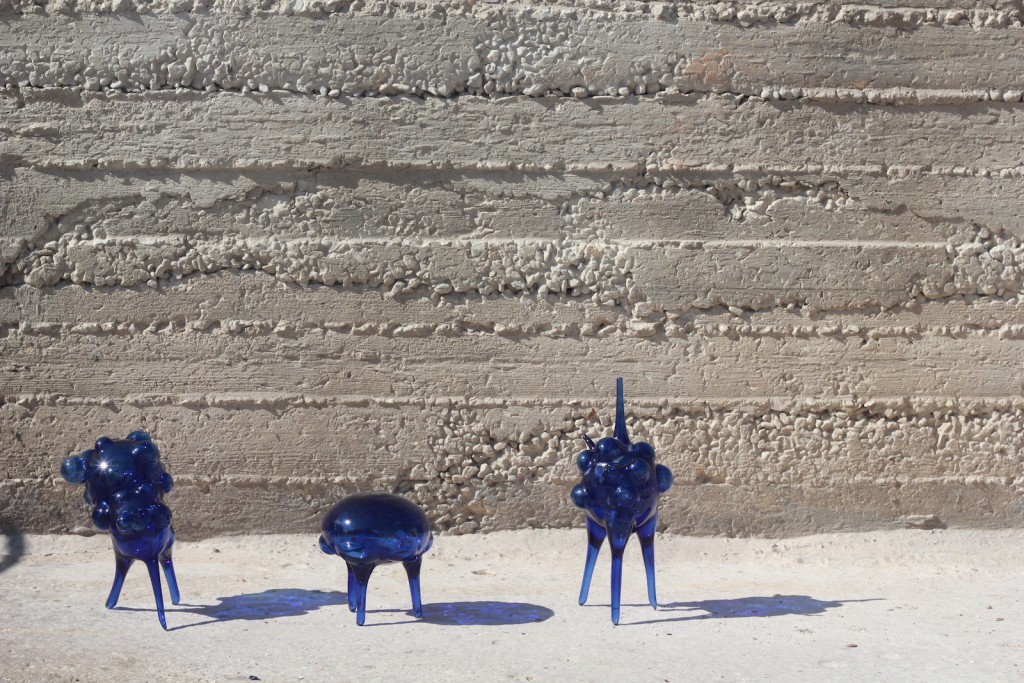 DIMA SROUJI - HOLLOW FORMS This glass collection was designed with digital tools and produced in Jaba’, a village near Ramallah, using the ancient craft of glass blowing. 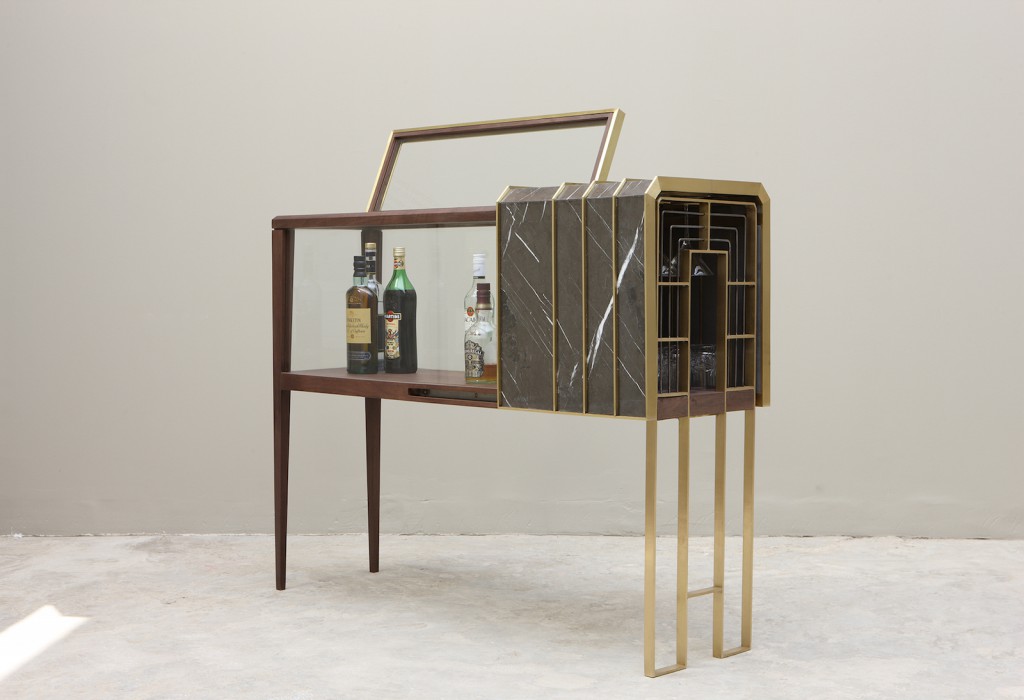 STUDIO A - THE CHARLES BAR This statement piece turns the experience of making a drink into one of discovery. Users need to explore every inch of it, as beverages are kept in a glass case that is only accesible via a top panel, and a secret compartment containing glasses is also hidden. 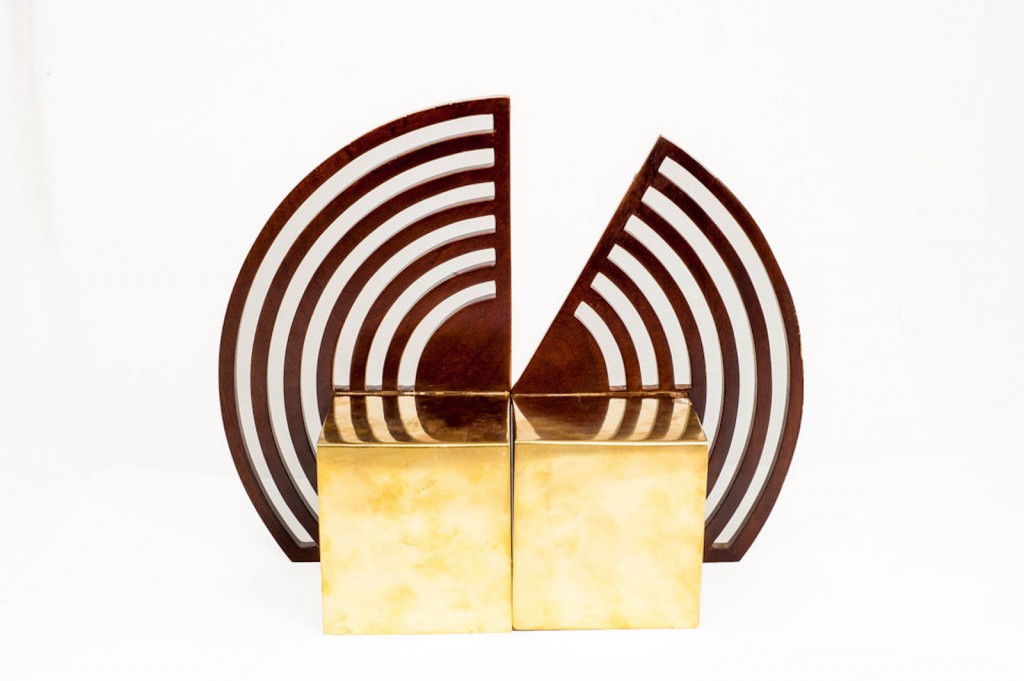 ABHISHEK MATTA - 27” 27” is a collection of outdoor furniture inspired by astronomical instruments, in particular the early 18th century Jantar Mantar. It questions the perception of these objects today, centuries after they were popularly used.

ANJALI SRINIVASAN - QUIVER VESSELS The Quiver Vessels vibrate, reacting to the surfaces they sit on. They respond to a poke, a wiggle, a fold and even a strong human breath, collapsing and returning to their original shape with contact. They are designed to erode the notion of a self-contained object by incorporating the interaction of the viewer. 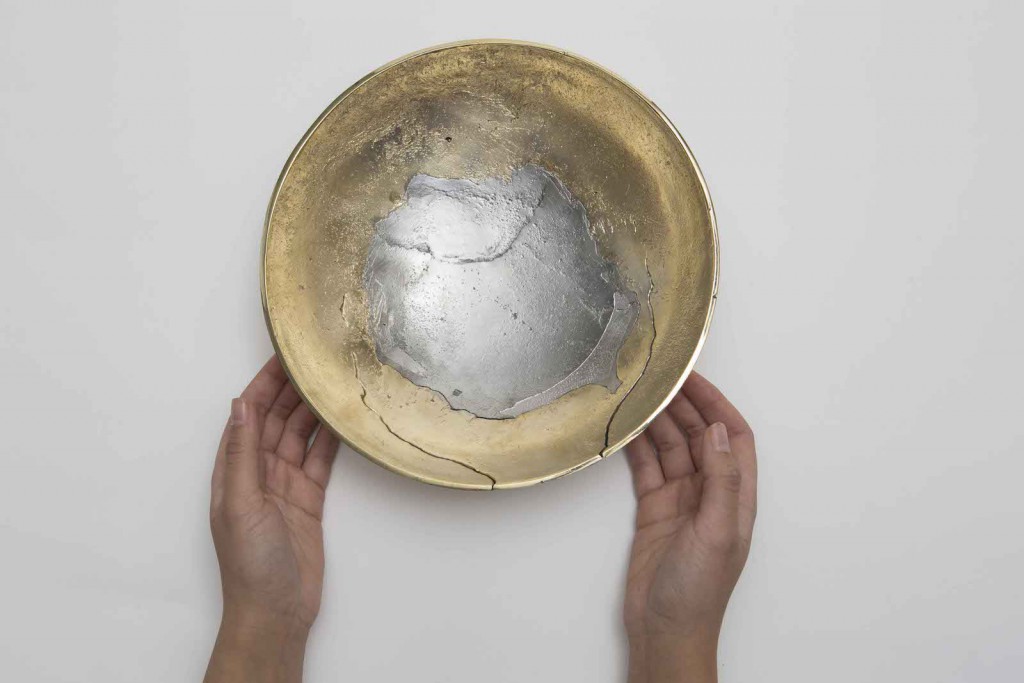 KAWTHER AL SAFFAR - DUAL BOWLS The unique process of dual metal casting using sand was developed by Alwafi craftsmen in Kuwait. By using simple decorative forms, Kawther Alsaffar was able to push the limits of this technique by casting bowls that highlight the distinctive and beautiful imperfections produced by this process. 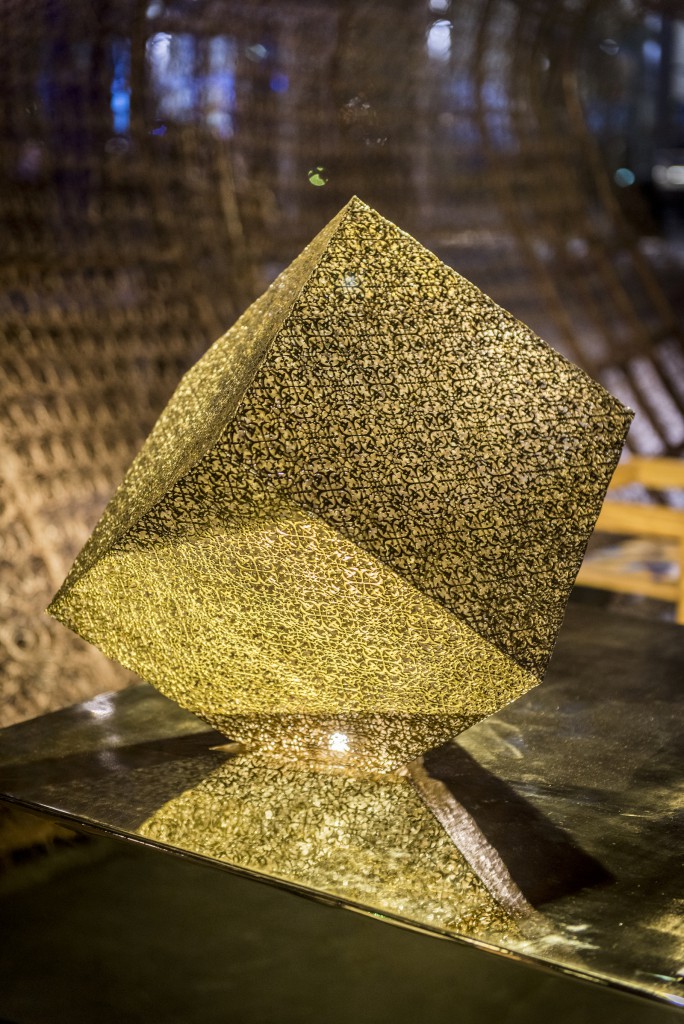 MAISON MEFTAH - UNITÉ It takes 1,600 hours to forge the cube-shaped Unité lamp in MEFTAH’s workshops. Fine openwork creates a metal lace enhanced by light, projecting shadows that expand beyond the borders of the object. The form moves with the angle of contemplation, until it momentarily vanishes.
‹ Back 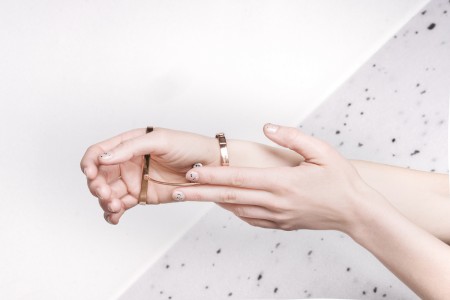 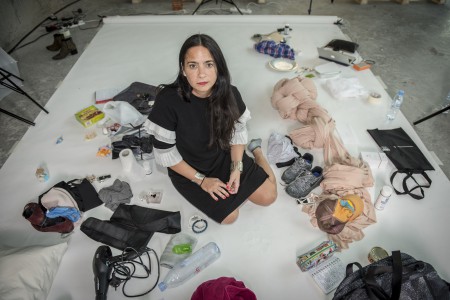 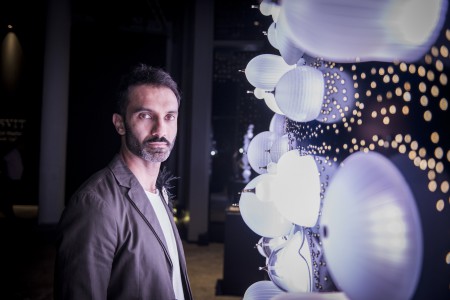 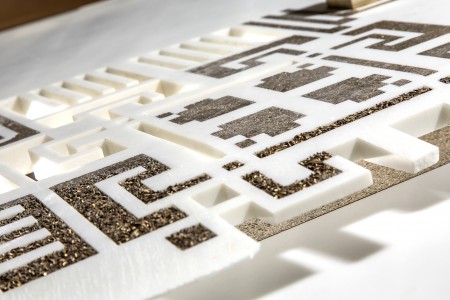 Returning for its 6th edition, Design Days Dubai (14-17 March) will yet again stake its claim amongst the world’s leading art-design fairs. Presented under the… Read more