Thomas Lerooy (b. 1981) lives and works in Brussels and Roeselare, his birthplace. After ten years in Ghent, he felt the need to move. “Brussels is still large enough to hide in. Here you are nobody. I’m also close to my gallery, Rodolphe Janssen.” It was a lucky coincidence that made it possible for the artist to take the run-down 1960s garage he had bought eight years prior and expand it onto the adjacent plot. He chose OFFICE Kersten Geers David Van Severen for the renovation and tasked them with transforming the building and adjacent garden into a single unit. The architects decided to completely separate the studio from the existing building. When you step through the front door, you find yourself in a garage that leads out onto a courtyard. From there, you enter the studio/house through an aluminium door. “Large, sliding panel walls on the north side blur the boundary between indoors and outdoors. It’s a reference to my own work, where I sometimes turn images inside out. Indoors, the architects drew inspiration from the Rockefeller Center in New York, where every floor has a different function. They tipped that vertical division sideways in this building and divided the space using glass boxes that they slid into the existing concrete structure.”

The freestanding kitchen is finished with old, pink tiles. “It’s the colour that children always choose first when given a colouring box,” Lerooy laughs. “Initially we were thinking of more of a lab table look with white tiles, but this colour just works better. The architect David Van Severen is a friend of mine. That created a special vibe. His team doesn’t often design artists’ studios. Because I am an artist, I ask different questions than their other clients do. The building is an interesting reflection on my work. I also work a lot with sculptures in glass boxes, for example. Whereas I tend to want to add layers and meanings to sculptures as an artist, the architects wanted to distil the studio’s beauty down to its essence: a technical structure made of glass and aluminium. I am a man of controlled destruction and tactile materials. This building stimulates me.”

Thomas Lerooy easily spends several weeks on a large drawing. A bronze sculpture takes about three months. “I build my drawings in a sculptural way, but that doesn’t mean that they are preliminary studies for future sculptures. I do the actual sculpting and casting process somewhere else. Here, I prepare everything on the computer. I use it for compositions, colours, inspiration and sculptural solutions in my work. I also increasingly make 3D scans of moulds. I even aim to start using 3D printing. I wouldn’t use it to print unfinished sculptures. I would use it as a starting point for my sculptures.” Lerooy’s work is a technically perfect danse macabre imbued with sarcasm and Belgian Surrealism. The dark world he creates is already in a state of decomposition. His works are contemporary memento moris in which even excrement takes on a symbolic meaning. Lerooy’s decadent, grotesque sculptures are inspired by the Surrealists and also by Dürer, Bosch, Ensor, Goya and Meunier. He finds beauty in creation as well as in destruction. Lerooy is an iconoclast. He takes Greco-Roman sculptures, which are now considered part of the Classical canon, and turns them inside out. Mother & Child may seem like a religious sculpture but in fact is a split torso, both hands holding balloons. In Lerooy’s best-known sculpture, Not Enough Brain to Survive, the perfectly sculpted body falters under the weight of its gigantic head. It is as if it is no longer able to carry the weight of history or art history. It is as if it no longer can handle perfection. 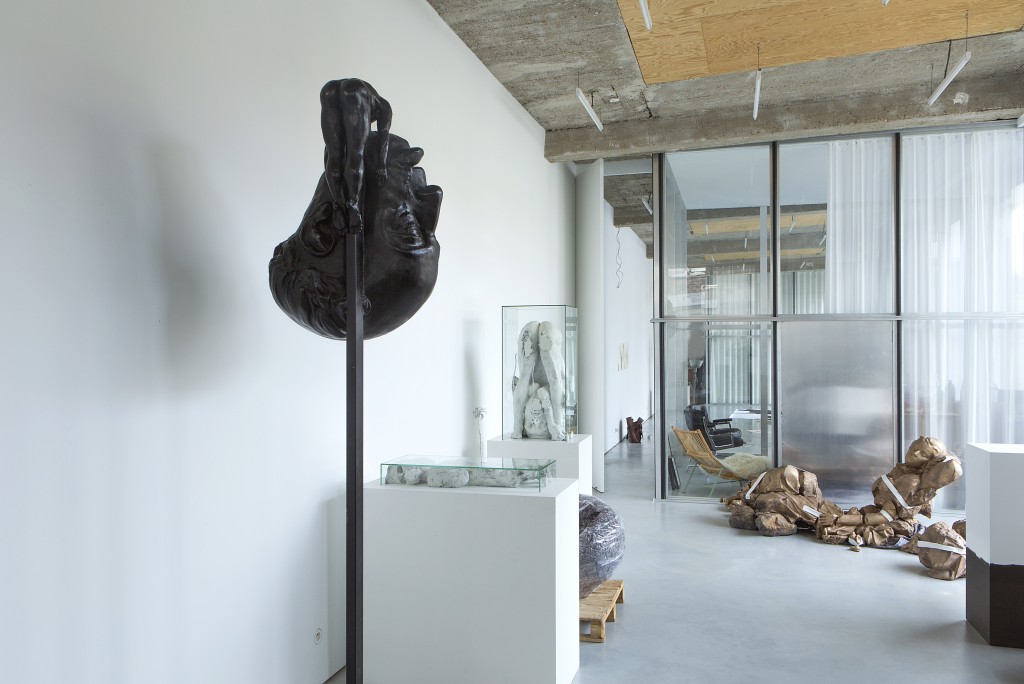 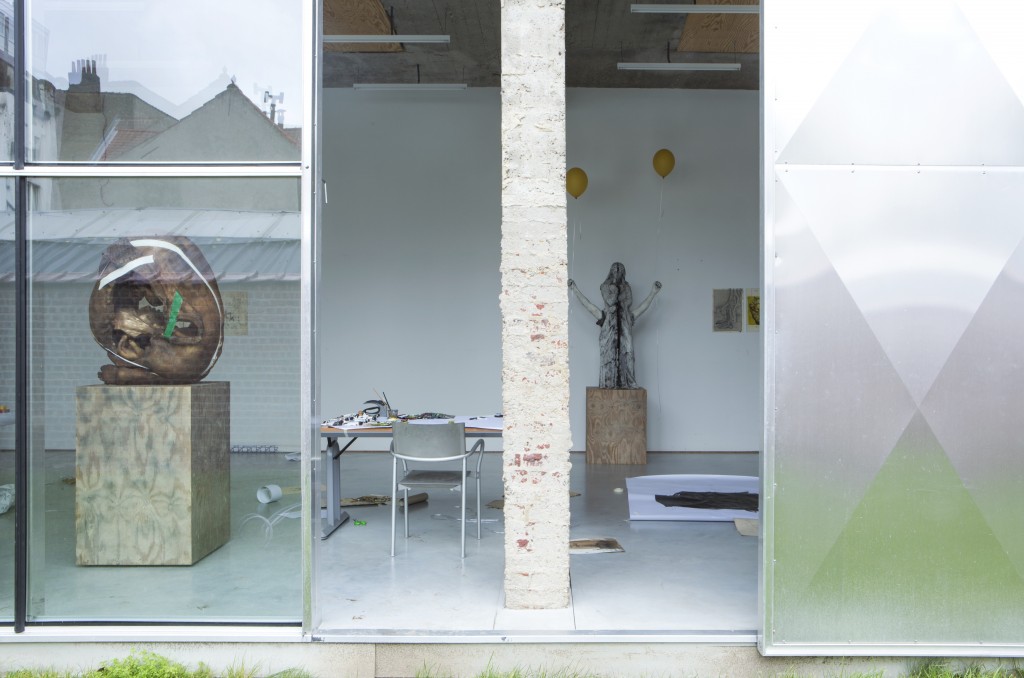 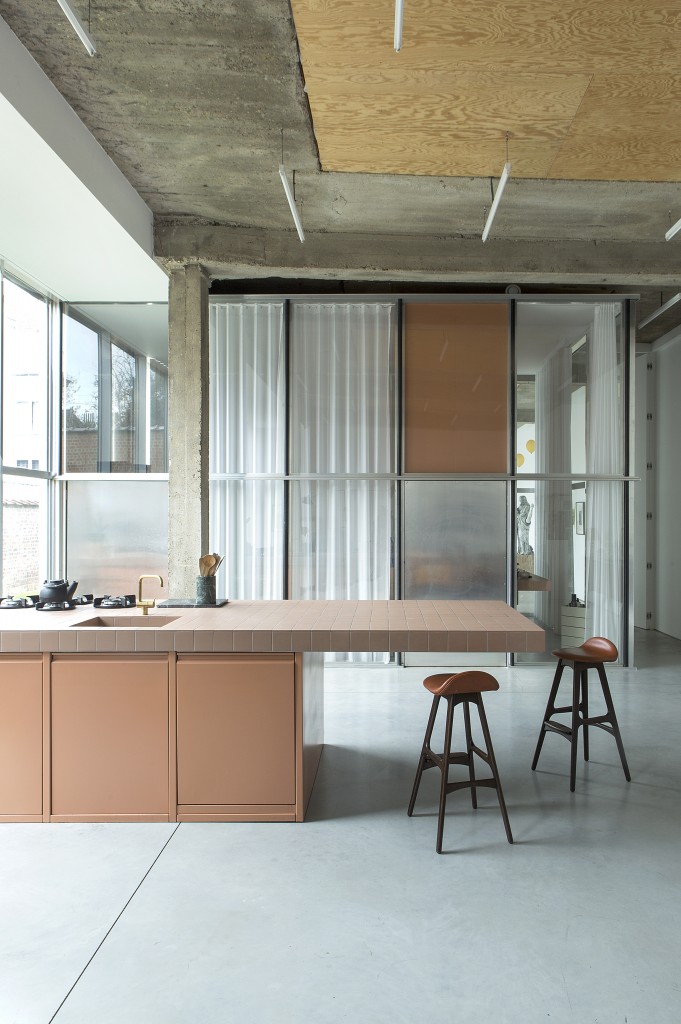 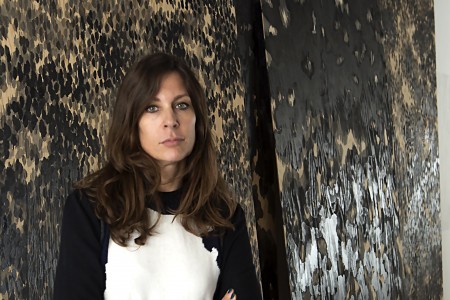 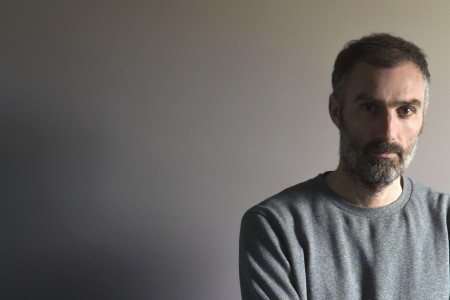 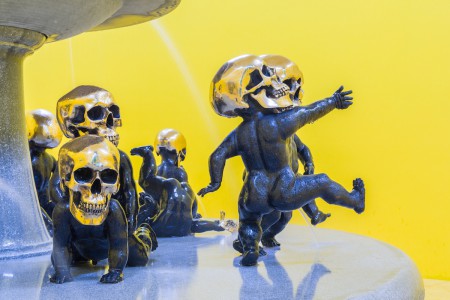