For our S/S 2021 issue: TLmag35: Tactle/Textile/Texture, Anniina Koivu, guest-editor of TLmag35, interviewed Hella Jongerius about her innovative practice that has recently focused on the potential of weaving and 3D weaving in design, architecture and science.

Colour and textiles have been the two constants in the prolific work of Hella Jongerius. Over the years, she has worked with both colour and textiles on a range of furniture pieces and products, from KLM airline’s cabin interiors and seat designs, to custom-made upholsteries for Maharam. She was design director of rugs at Danskina, and, as art director of Vitra’s Colour and Material Library, she creates systems that enable the matching of colours and materials within the brand’s vast collection. Her personal research begins where the job, within the industry, tends to end.

Hella Jongerius: I have worked with and within the design industry for many years and I have seen its potential, but also its limitations. From the very beginning I have been trying to change the system from within…

TLmag: In fact, you are very critical of the design industry at large. For a long time now, you’ve been swimming against the current, and provoking new ideas; alternatives to what is being done, and especially, how it is being done. From the beginning of your career, you’ve been searching for the craft, the hand of the maker, in the industrialised process. You celebrate the “imperfections” in objects. You have called for more diverse colours that are alive, and react to light, rather than flat stable ones. A few years ago, you published the manifesto “Beyond the New” together with design critic Louise Schouwenberg, which advocates for an idealistic agenda in design. A call for designers to take the lead in an industry that you described as “trapped in a rat race for the largest market share.” You plead for replacing hyper-consumerism with more opportunities for experimentation. You rock the boat, in many directions.

HJ: I try. I have always had a strong social and political agenda, and that tends to make me go against the grain.

TLmag: Recently, you have moved more towards exhibitions as a way to share your work. After Breathing Colour, which was a statement about the versatility of colours, your latest exhibitions, Interlace and Woven Cosmos, delve into the potential of weaving, and in particular 3D weaving. My first question is, why did you choose to look at weaving instead of knitting and 3D knitting?

HJ: 3D knitting is already on a good path. It is a fairly simple technology – basically you create a loop over another loop – so it’s already 3D. And knitting is already being worked with a lot – in the sneaker industry, for example. You can hack into knitting machines to re-programme the software. That isn’t happening in weaving. The software on looms can be thirty years old. Weaving has much greater potential than is currently being used. 3D weaving in particular has really lagged behind the times.

TLmag: You took a sabbatical year to learn about weaving.

HJ: Yes, I wanted to learn to weave and understand the full circle of weaving, not just small bits of the industrial process. I needed to see for myself what is actually possible. And not be dictated by the industry’s demands for efficiency and productivity.

AK: The loss of the crafts in technology is one of the big questions you try to highlight in your work.

HJ: Weaving on the hand loom has been an exceptionally creative craft for centuries. Of course, the Jacquard loom liberated weavers from some of the most labour-intensive manual work that went into weaving. The Jacquard loom initiated the Industrial revolution and subsequently mass production. Fully automated, it also erased the creative gap. So nowadays, the versatile hand loom has been degraded to a mere robot. Automation totally crushed creativity.

HJ: It’s all – and only – about efficiency. The textile market has become shallower and shallower. To a great extent, globalisation and fast-fashion are to blame, because they both have greatly accelerated production cycles, making the textile industry one of the most pollutive industries. This is why I want to address weaving. Complex weaving constructions have had to make way for faster and simpler plain weaves. Materials have been standardised, so there are very few options. A warp is basically only black or white, and even the choices for the weft have decreased to those few yarns that can run as quickly as possible from left to right. Whereas, in reality, so much more is possible.

TLmag: How have you started to rethink weaving?

HJ: Hands on! That’s my motto. With the team in the studio, we started from scratch by building a loom. Then we built multiple looms, “human looms”, that can create 3D weaving structures and anything else that you can’t do in the industry.

TLmag: The results were first presented in your exhibition “Interlace” at Paris’ Lafayette Anticipations. It was a large work in progress, filled with samples laid out on tables and taped to the walls. Part of the beauty of “Interlace” was its tactility, and how it made it possible to witness the making of woven objects.

HJ: The whole building was turned into a gigantic loom.

TLmag: You literally turned the gallery into a workshop. Over the course of the summer of 2019, you invited weavers, designers and artists to experiment with different weaving and braiding techniques. Together, you developed the actual objects for the show.

HJ: And when I received an invitation from the Gropius Bau in Berlin to make a new exhibition, I wanted to investigate the cultural and spiritual meanings of weaving. One of the questions was “what could be the future of this craft”: I wanted to explore the topic of 3D weaving further. Here, we speculate on the future of weaving. What kinds of new constructions could there be? What can the lightest and strongest constructions bring, not only to textiles and design, but to other disciplines, as well?

TLmag: Your studio must be a magical place right now, filled with heaps of yarn and woven samples, props and large-scale interlaced cubes and bricks, all piling up. What are you developing?

HJ: We are frenetically building new models, new systems and new types of weaving, trying to give as yet unknown answers to questions that I am able to clearly ask. A lot of textile-engineering goes into the work. There are a few exceptional brains in the studio, my long-time team members, as well as young programmers who not only studied design, but mathematics as well. They are the ones who can programme a loom, and then we work with our hands. It is a mixing and matching, of smart hands and bright brains. We have a digital Jacquard machine in the studio. In the industry, the TC2 loom is used for sampling and prototyping. We use it for experimentation. We can digitally programme patterns, but then we work them by hand. As you run the shuttle by hand, the weave can be interrupted any moment. We can change the weft any time. We can use different yarns, even ten at a time, different thicknesses, paper yarns, even conductive yarns.

TLmag: The DIY loom you had built for Paris was called the Seamless Loom.

HJ: For Paris we built four looms that worked together as the Seamless Loom. It allowed us to develop the skin of a three-dimensional object, the “brick.” But we had a hard time weaving the inside of a brick, so it did not completely work out. But still, every brick we attempted was a next step in the discovery process. That’s how we progress.

TLmag:  There is a Space Loom in the Berlin exhibition?

HJ: It is actually the same loom as in Paris, but rebuilt in Berlin. Since Paris, we have developed new know-how, for example, we hacked our own four-part loom and returned to a flat loom. This move allowed us to actually create multi-axial weaves. With the digital Jacquard loom, I also created woven windows. This started as personal research project about my handwriting and an expression of yarns, in which I explore the possibilities of weaving as an act of painting. The window is a famous motif in painting, its structure works as a frame allowing people to look either outside or inside or into the painting. The window is a symbol of seeing.

TLmag: The same loom allows you to work spatially.

HJ: Yes, so, now we don’t weave around a structure anymore. Rather, we build a spatial structure from the ground up. We developed a new method of weaving by shifting the warp in multiple layers. In this way we can weave sandwiches of double-faced or layered fabric. We programme it so that multiple layers are interconnected, while other parts of the sandwich are separate. In the end, it is a like a package that we can cut open so that it unfolds into a three-dimensional structure. Like a pop-up card. It is very exciting and liberating.

TLmag: You started by hacking the system, deconstructing hierarchies.

HJ: Yes, my starting question was really: what if the warp becomes more important than the weft? I wanted to unravel the meaning of textiles, without restrictions and established logic. Take the brick. We weave only the ribs of the cube, which are all interwoven. The weft becomes the warp which turns again into the weft. And that’s the interesting part.

TLmag: Where do you see potential applications of your research?

HJ: The biomedical field is already working with these kinds of morphing membranes, for vascular prostheses, for example. Other applications in carbon fibres are used in the car and airplane industries, where woven structures have been worked with for a while. But there is more: imagine 3D-woven architectural structures. You use less material, less weight, less of carbon footprint.

TLmag: How do you imagine such pliable, textile architecture?

HJ: Textile can have many different faces: it can be soft, it can be hard, it can be transparent, you can add sound and moist absorption, or anti-bacterial layers. Imagine a brick that is structurally strong, but at the same time light and soft and pleasant to touch on the inside. All these characteristics could be produced in process, without having to add on other layers of building material. Insulation could be integrated. You could create a pleasant environment, regulate the climate, and personalise colours – all with just one “brick”. This dream is still pretty distant, but that is what we are working towards: pliable architecture. 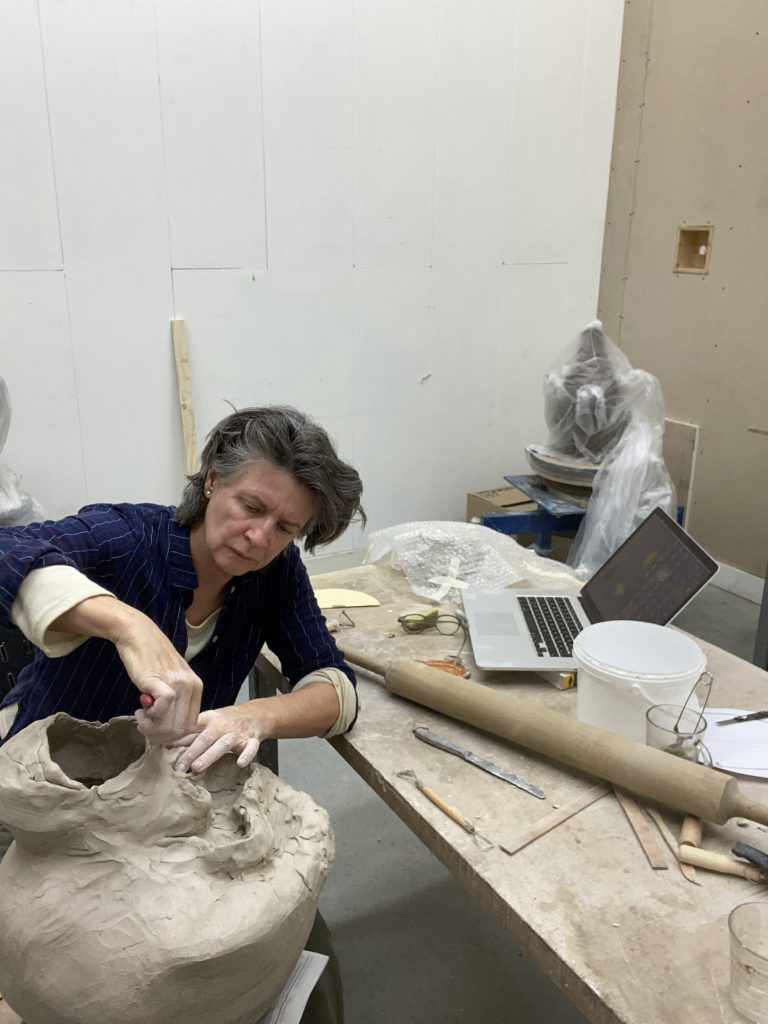 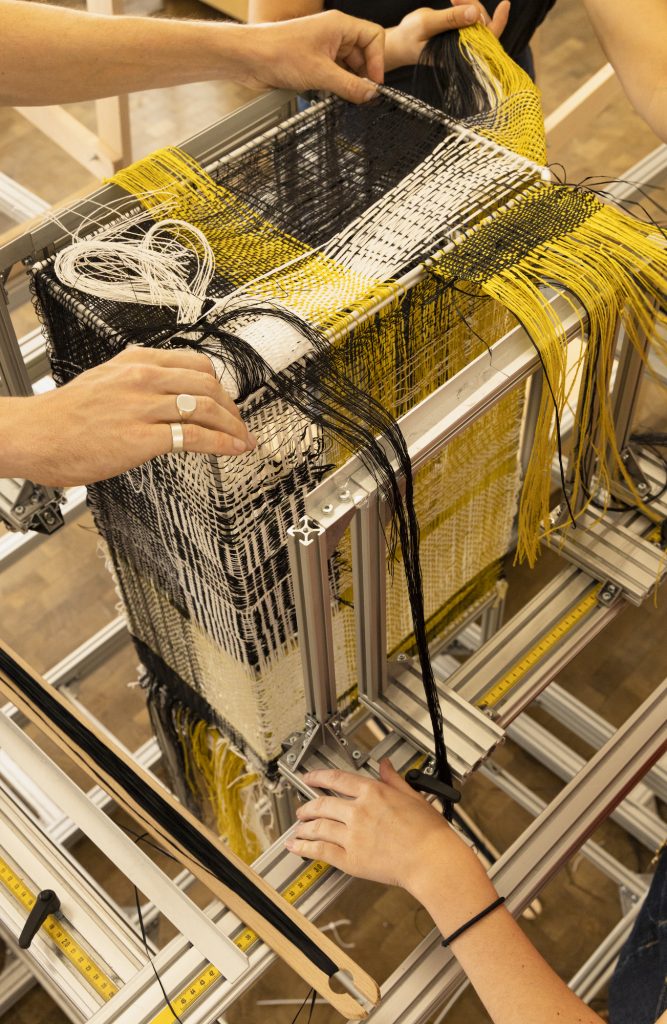 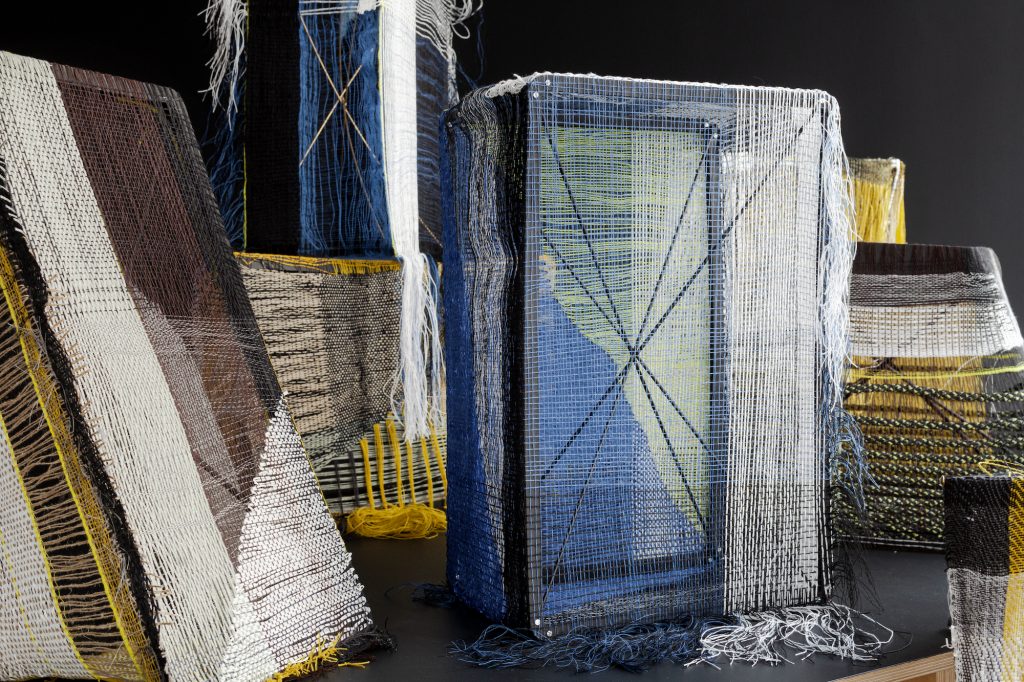 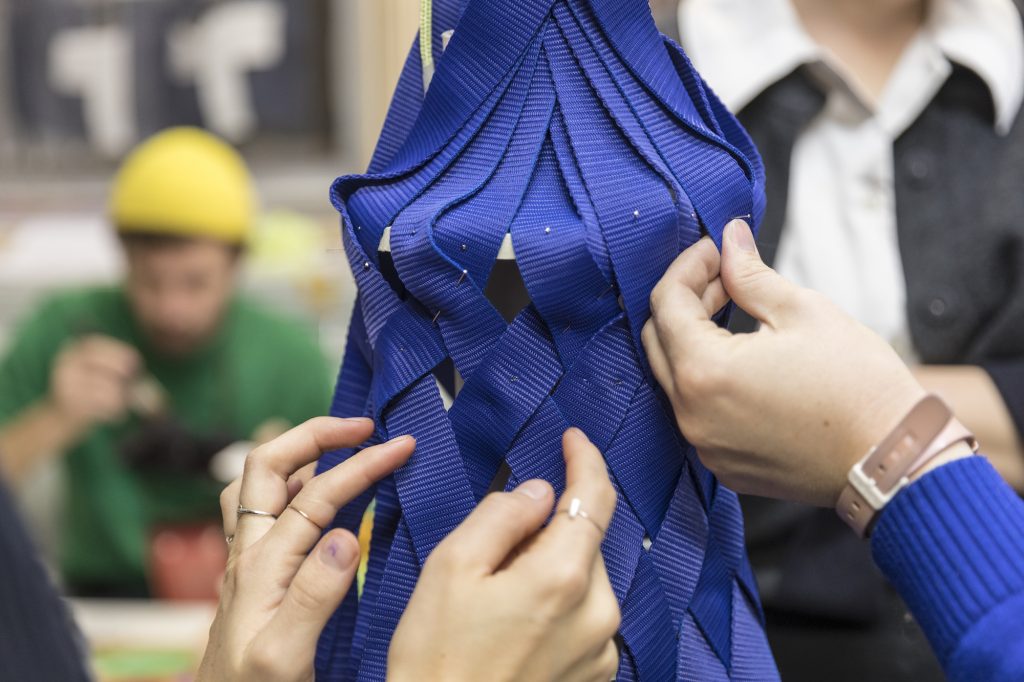 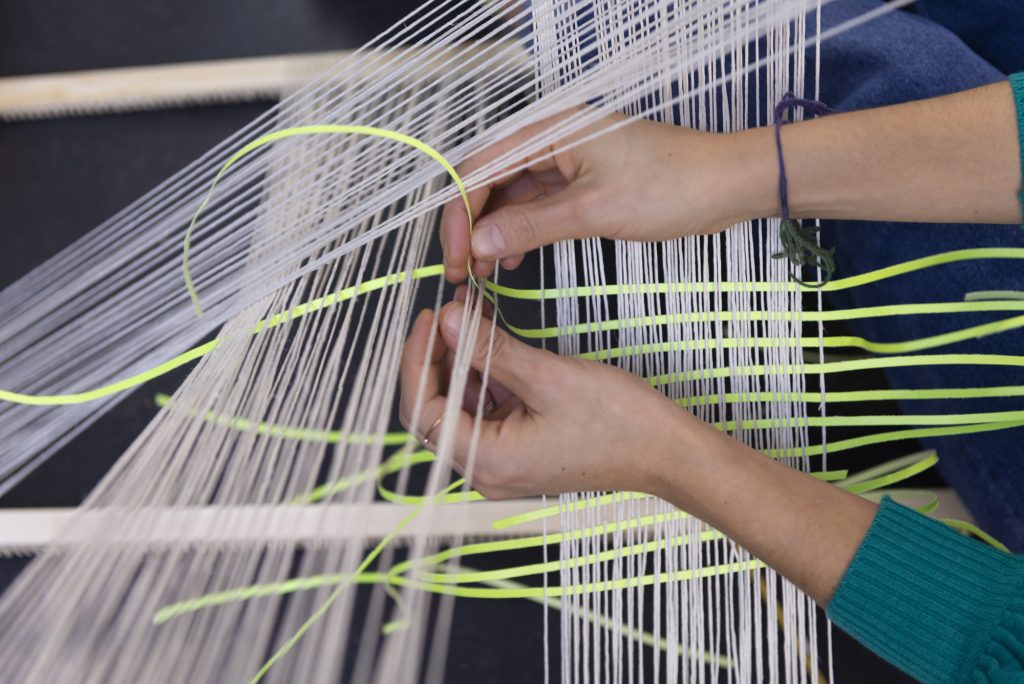 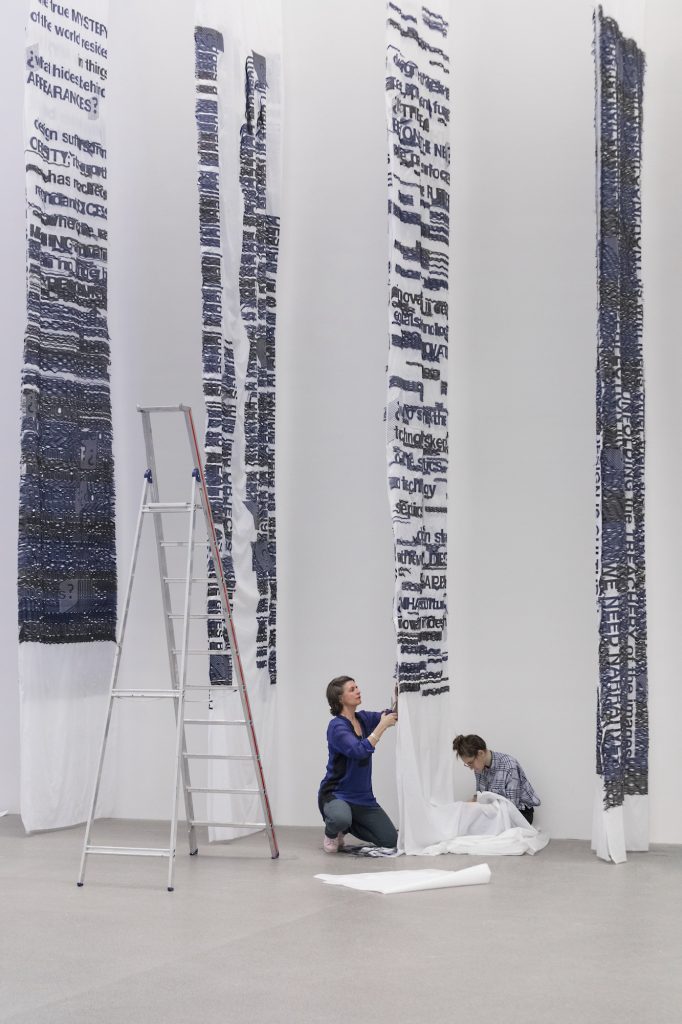 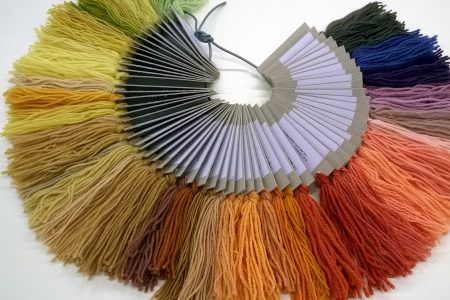