The five installations in the exhibit each consist of several ceramic figures familiar to the artist’s twisted world of cute pop aesthetics and violent scenes. A little girl eating a young deer instead of kissing the animal, a kneeled girl talking to a two-headed bunny, a sleeping woman surrounded by ghost children and a girl with golden birds flying out of her eyes echo traditional Simonsson, but also take his work a step further. Instead of the usual casting of sculptures, the artist has sculpted half of the pieces in the exhibition by hand and coated them with a nylon flock coating reminding of green moss.

“My sculptures are usually very sleek and smooth. Pieces at Moss People are rougher and more personal. You can see my handprint in them,” the artist states. “The nylon coating also works well when the surface of the sculpture is slightly coarser and you can see that it’s handmade.”

Simonsson’s work grows from dark Nordic storytelling tradition stemming from H.C. Andersen’s fairytales and Edvard Munch’s paintings. Coating the sculptures with moss reminds him of moss-covered flagstones in a park near his house in Fiskars village in Finland.

“Nothing that is alive stays static long enough to grow moss, but a ceramic figure is frozen in a situation,” he tells of the thoughts behind the works.

Kim Simonsson’s work has been collected in over 20 museums and foundations. The exhibition at Jason Jacques launches collaboration between the artist and the gallery, and also states a shift in the focus of the gallery from antique ceramics to contemporary ceramic art. • 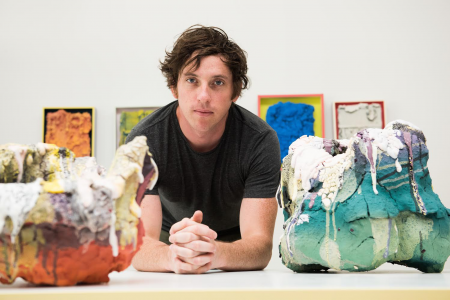