This year’s edition of the SaloneSatellite had 650 young designers showcasing their work. From seating experiments to new uses for negatively perceived reactions —think of rust and the crackling of fruit seeds—, here are some of our favourite projects

AUFGABE NULL DOES AVOCADO
No item of food comes close to the avocado in terms of representing the Millennial generation. The fact that non-specialised supermarket chains in the Northern hemisphere carry it year round is a testament to how accustomed we’ve become to having the tropical fruit on demand to add on toasts, smoothies and cakes.

That’s why Aufgabe Null, a Berlin-based studio, is asking us to consider the actual time that goes into getting that green gold in our hands. With the Tropicália collection, Hilaria von Saldern and Nikita Suerhoff are proposing a set of beautifully underdressed seed receptacles, with a brass grid system that allow users to quantify the growth stages of a plant. The name itself is a nod to how Brazilian tropicalistas blended the local and the foreign into strikingly new forms of art. But in this case the Palta Vase, the avocado version of the containers, has the added bonus of reminding consumers of the many weeks it takes to produce these new culinary mixes, and thus to be more considerate with their imported food.

THE GOOD KIND OF RUST
Mothers everywhere have told their children to never touch the rust on metal furniture… and yet here’s Japanese designer Yuma Kano telling us to do otherwise. With the Rust Harvest collection, he engaged in a delicate hands-on process —which included exposing buckets with steel plates in a shipyard, in order to speed the electrochemical reaction with seawater— that stopped the iron oxide at just the right moment. “Instead of rusting acrylic directly, I used an innovative method to transfer only the rusted surface from the metal plates using adhesive resins,” he explains.

The unpredictable patterns created by oxidation lie contained in the acrylic plates that make up benches, tables and stools — which, contrary to the way one usually experiences rust, can now be touched and enjoyed, their many layers now visible thanks to the transparency of their new home.

BOW DOWN
Chinese designer Yingyu Zhang felt lumbar pain after an hour of sitting down on a regular desk chair. Her answer to this issue is Cetus, a kneeling chair made of laminated wood that originally debuted at SaloneSatellite Shanghai last year. “I’ve tried sitting down for two hours on it, working on a low table, and I felt no pain,” said the Hangzhou-based designer.

A BREATH OF FRESH AIR
Italian designer Claudio Gatto came up with a sturdy yet portable type of inflatable furniture. The Soffio collection, which includes a table and a set of four stools, can be flatpacked and transported in two backpacks —an easy thing, since the former weighs only seven kilograms and the latter weigh 1.5 kilograms each. The pieces, made of nautical-grade PVC, are built to last —that’s why, for this project, Gatto thought not just of camping enthusiasts, but also of perennially on-the-move Millennials in need of easily transportable furniture.

ALL TOGETHER, NOW
Concerned about the ever-shrinking real estate space in the vicinity of Shanghai, where he lives, Fan Weiyan came up with an all-in-one room divider. The wooden unit, called Secret Screen, hides inside a table and a stool, storage units and rooms for shoes. The interior walls are covered with silk made by hand using a traditional technique —giving KE’s art director an opportunity to combine his country’s past with its present.

BLACK CONFECTIONERY
Dubai-based Ammar Kalo saw a sweet end to the discarded truck tires he saw around town: through a process of compression, he turned them into the Macaron stools. Through his practice, KALO, the designer and architect develops projects that examine the links between materials, fabrication tools and form-making.

BABY THINGS
Tink Things, a project by Croatian studio Benussi&theFish, provides sensory furniture for children. “Kids are still developing, and the way they cope with sensory stimuli during childhood is not only connected to their day to day experiences and their feelings, but is also of crucial importance to their growth and all future experiences,” they explained.

Their collection, which includes the cocoon-like Mia chair, was the second-prize winner in this year’s SaloneSatellite Award. The third spot was claimed by Japan’s Yuri Himuro with Soft Block, while the top award went to Stefano Carta Vasconcello’s Cucina Leggera. 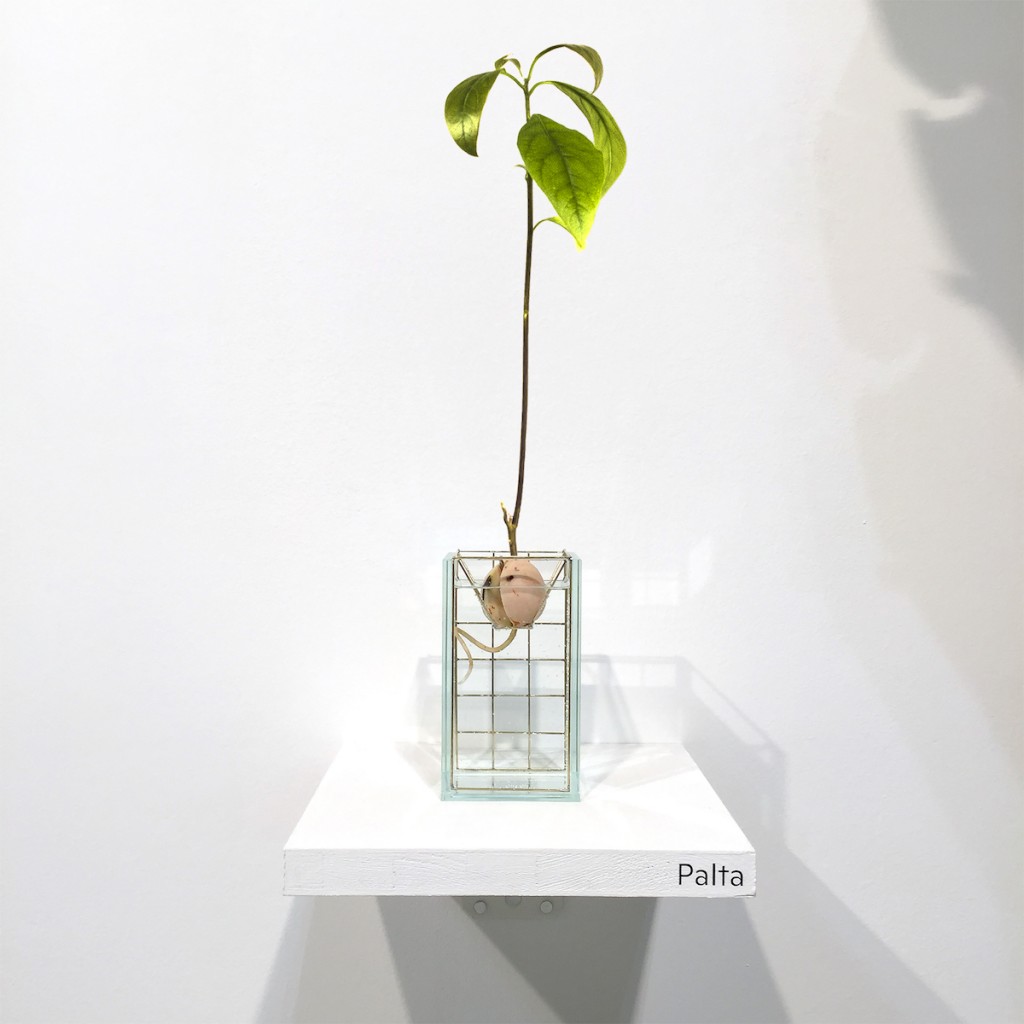 AUFGABE NULL
The Palta Vase is specifically designed to grow avocado trees. A common kitchen leftover is thus given a second purpose and turned into a living design object. 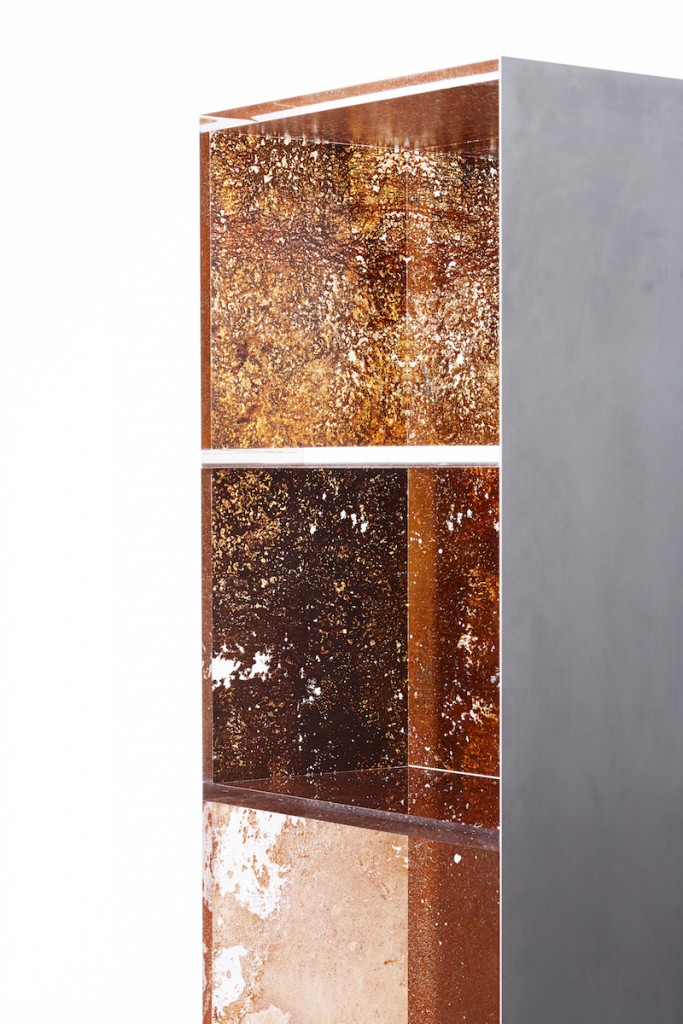 YUMA KANO
“Normally, rust progresses with the passage of time, but since the rust surface is now adhered to acrylic, it will never be exposed to air to allow further rusting,” explains the Kanagawa-based designer about his Rust Harvest project. “In other words, it is in a state where the ‘time’ of rust is captured inside the acrylic. 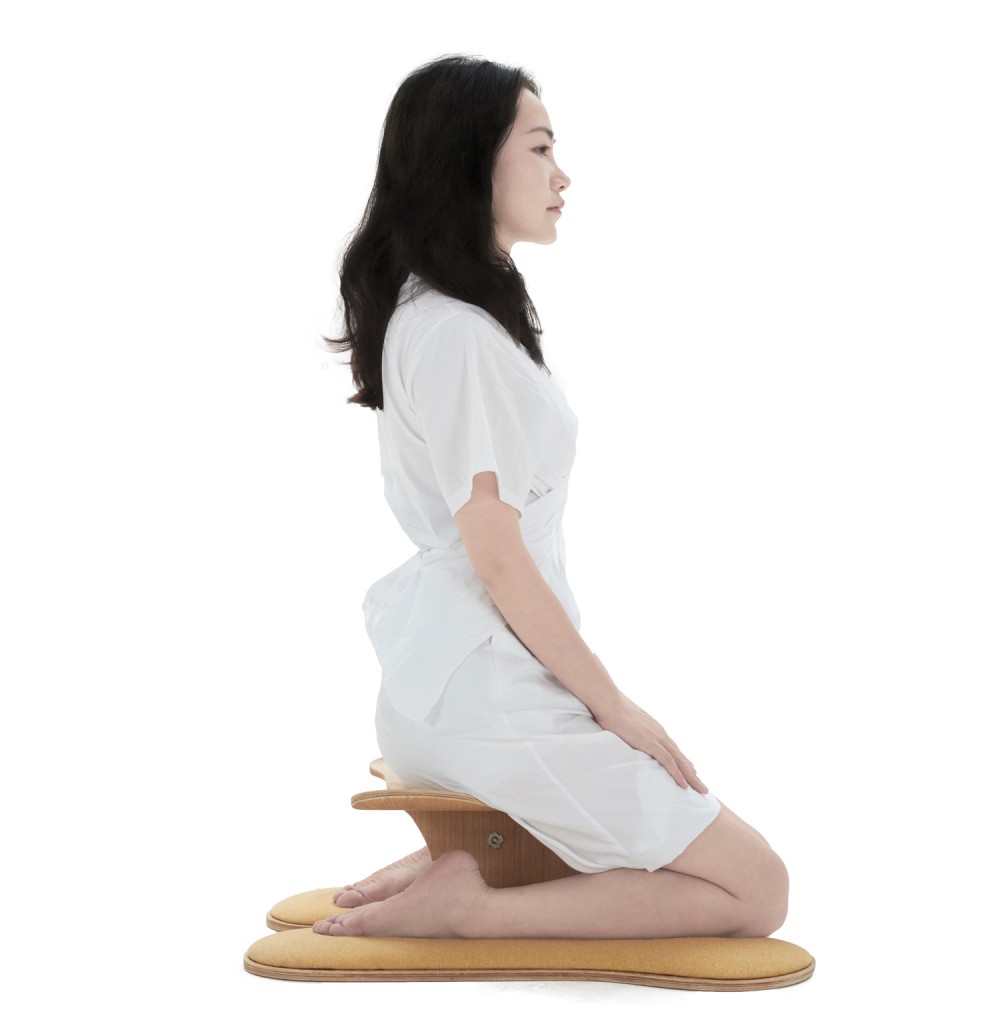 YINGYU ZHANG
The sculptural chair enables the user to rest both body and mind. 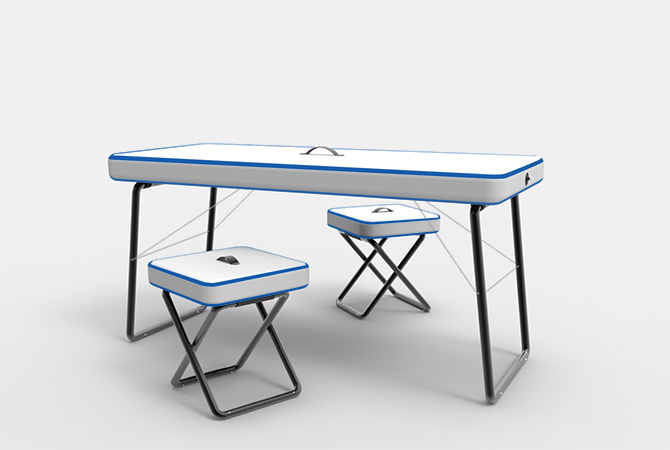 CLAUDIO GATTO
Inflated and deflated in around five minutes, the Soffio collection can be easily stored in a garage or warehouse. 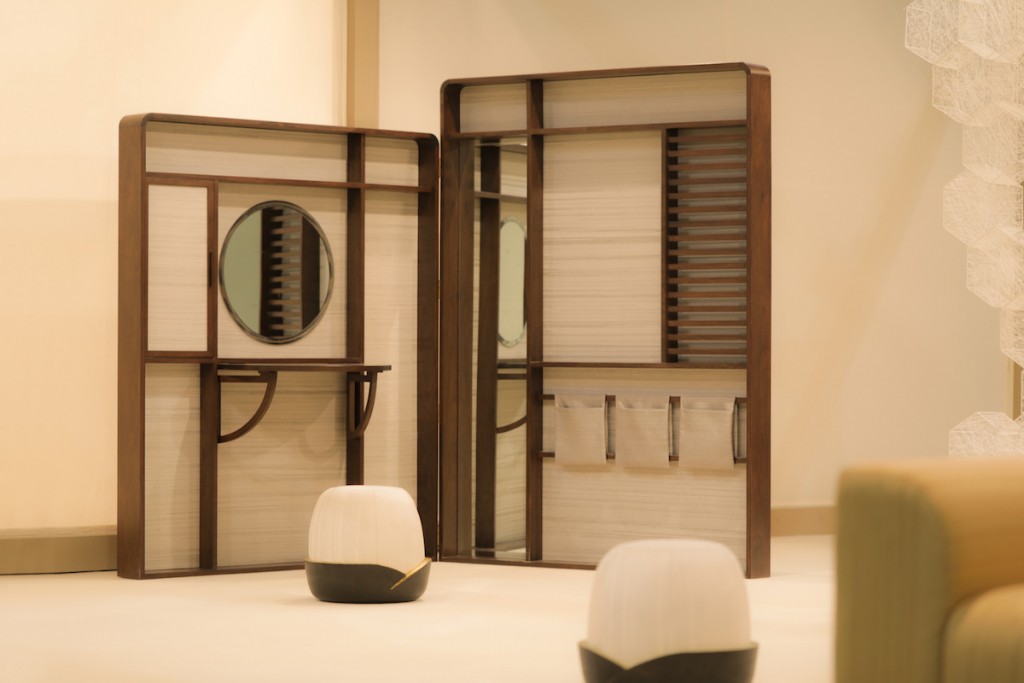 FAN WEIYAN
The designer’s Secret Screen combines past and present through the use of function and materials. 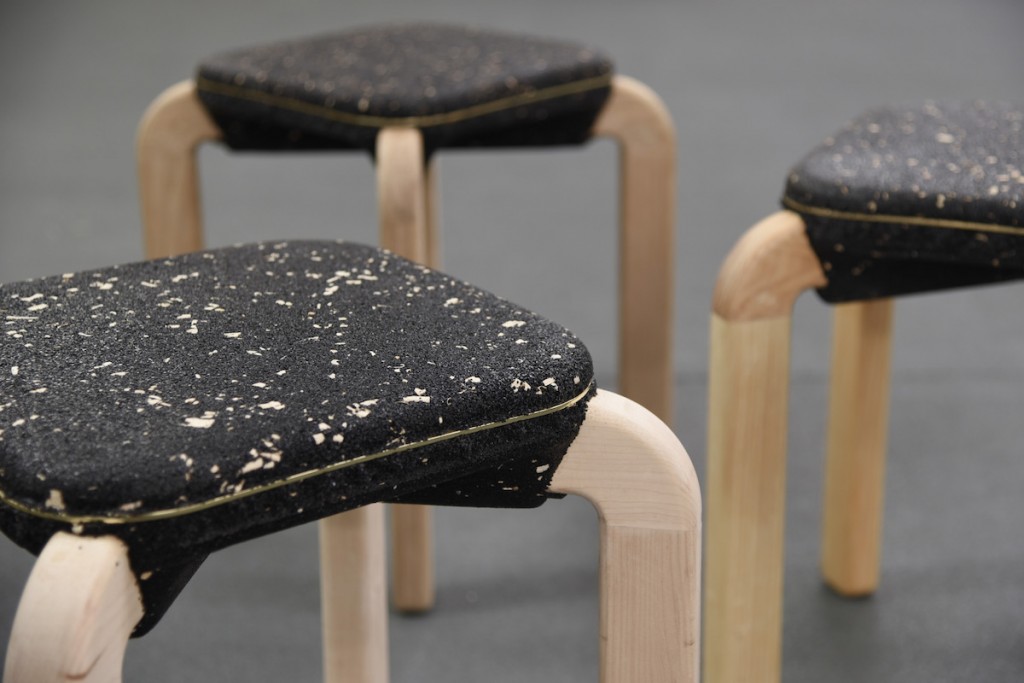 AMMAR KALO
The Macaron stools are made of reutilised truck tires, salvaged from waste facilities in Dubai. 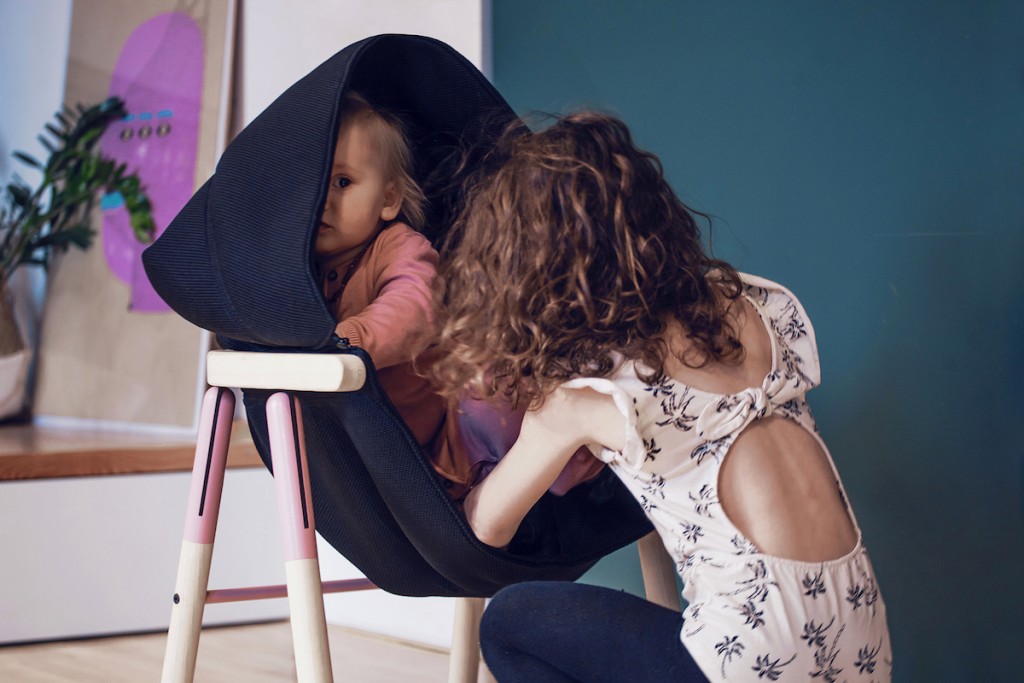 TINK THINGS
The non-fixed fabric seat in the Mia chair allows for gentle rocking, which helps with concentration and acts as a calming factor by providing deep pressure soothing. If they feel overwhelmed, the child can pull up the “cocoon” for isolation.
‹ Back