In this interview first published in TLmag’s “Islands of Creation”, managing editor Blaire Dessent talks to Finnish businessman and art collector Timo Miettinen about his passion for contemporary art, the new developments with Salon Dahlmann, and how island life influences his vision on art.

Over the past decade, Finnish businessman and art collector, Timo Miettinen, has helped generate international attention to the thriving contemporary art scene in Finland through exhibitions at Salon Dahlmann, his unique art and cultural space in Berlin, as well as through rotating exhibitions in homes in Finland and Capri. Miettinen talks to TLmag about his passion for contemporary art, the new developments with Salon Dahlmann, and how island life influences his vision on art.

TLmag: When did art collecting, for you personally, move from a casual interest into a full-fledged passion? Do you remember the first piece you bought that started it off?

Timo Miettinen (TM): Collecting art something that came naturally – I collected things that seemed precious to me since I was a child. My mother, who had a passion for Finnish landscape painting, influenced me a lot. Growing up, I started collecting art on my own – fat first related to the family collection. The first piece I bought myself, in the 1970s, was a mid-20th century landscape painting by Eero Järnefelt. Over the last 15 years, my vision on collecting international contemporary art opened up with a more accurate and precise focus.

TLmag: How have you seen the contemporary art scene in Helsinki grow in recent years? Has the collecting and exhibiting community become bigger and more engaged?

TM: In the last decade, the Helsinki art scene has become more international and more influential, both within Finland and among an international audience. I always tried to encourage this connection, and wanted to build a bridge between Finland and the rest of the world, especially the Berlin art scene, which seems to be a meeting point for the international art world. This is why I started organising exhibitions at my space, “Salon Dahlmann,” displaying my collection combined with exhibitions by leading art curators and artists from Finland and the rest of the world.

TLmag: Do you see Finnish artists as getting more international attention in recent years?

TM: Definitely yes. Artists such as, Antti Laitinen, Eija-Liisa Athila, Ola Kolehmainen or Elina Brotherus, who are all in my personal collection, come to mind. Not to mention the earlier generation, for example Ville Kylätasku, Matti Kujasalo and Marianna Uutinen, who are established and helped influence new generations of artists. And Kirsi Mikkola, currently presented at Salon Dahlmann, in Berlin, teaches at the University of Applied Arts in Vienna and has had a long career in the United States.

TLmag: Would you talk about Salon Dahlmann, which you founded in 2012 in Berlin, as both a platform to exhibit your collection, but also to create a new meeting place for cultural conversations and events? How has it evolved in the last 7 years? What is the significance of the building itself?

TM: I founded Salon Dahlmann to open up my collection to the public. Art should not be kept behind closed doors –– it is much too important and beautiful to be locked away without being seen. The exhibition space was meant to be a meeting place for art, music, performance, talks – all means of cultural and intellectual exchange to educate, engage and entertain people. The reception was overwhelming. With every event and every opening, more people streamed into our space full of excitement and interest. Salon Dahlmann became a well known and respected institution over the years. Nevertheless, we have now reached a time of change. The exhibition space as it was will not continue anymore, but will be altered into a private apartment with the possibility of public access on Saturdays. My collection will still be visible – but in a more private manner. However, the exhibition programme will continue and be led by Robert Grunenberg, a Berlin-based artist, curator and writer. The building, located on Marburger Straße 3, has an important historic background as one of few preserved, 19th century buildings inhabited by its Jewish owners, the family Mühsam – later Dahlmann – until the day I bought it. I wanted to install a cultural cluster that would include design and cultural studios, creative agencies, an art gallery and my collection. And there are more interesting developments to come.

TLmag: You also present your collection in Finland, in your home, but I’ve heard you also have a house in Capri, where the collection is also presented? Is this a private space or public?

TM: The estate in Capri is a private place, very closely connected to my family history. My parents spent their honeymoon there in 1953. I listened to so many stories about the island from my mother during my childhood. I first visited the enchanting island of Capri myself in early 2000 and we decided to acquire a place there. We bought an olive grove with a ruin near a nature conversation area and turned it into our little private paradise. Today I like to call myself a “Semi-Caprese” and love having this magical retreat in my life.This year I plan to establish an artist studio and will invite artists to work and exhibit on the island. I want to organise an exhibition with works originated in and inspired by the place. This exhibition could also move to Berlin one day.

TLmag: Is there a different approach to showing work on an island, with the bright sun and sea rather than an urban environment?

TM: Of course. An island is far from the busy city, life is much easier and focused on pleasure and enjoyment. Capri particularly has a very romantic atmosphere that puts you under a marvellous spell. Everything is relaxed and bright, maybe even clearer.

TLmag: Part of what our theme, “Islands of Creation” is exploring, are the mythologies and rugged landscapes that have attracted people to islands for millennia. Though quite different, Capri and Finland both have a mythological, remote, wind-swept beauty about them. How do these landscapes influence you? Is the decision about what to install in each location (Berlin, Finland, Capri), influenced by the natural surroundings at all?

TM: That is an interesting question. Capri is definitely a special place – far from the rush and work, influenced by sunshine, the sea and warm weather. Having grown up in Finland, my life was always characterised by retreats near lakesides, islands and more or less unpopulated natural areas. Our family spent summers by the Gulf of Finland – so I am in a way bound to shores and beaches, the calmness and vastness. That stands in contrast to my busy, work-life in the city.

At the moment, the artwork installed in the house in Capri is related to the island – and I like that. Regarding Helsinki and Berlin, I would say that the choice of the artwork installed in our homes is also influenced by the interior design and last but not least by the architectural circumstances. Both 19th century buildings have high walls and mouldings, and I combined classical and modern Finnish Design with Italian and French influences. 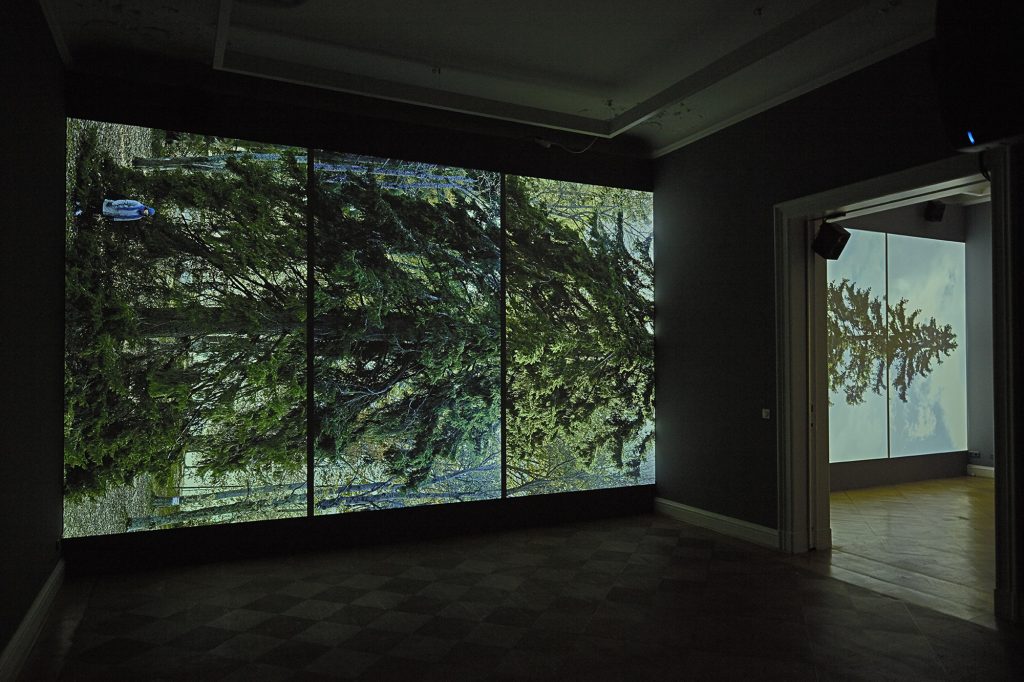 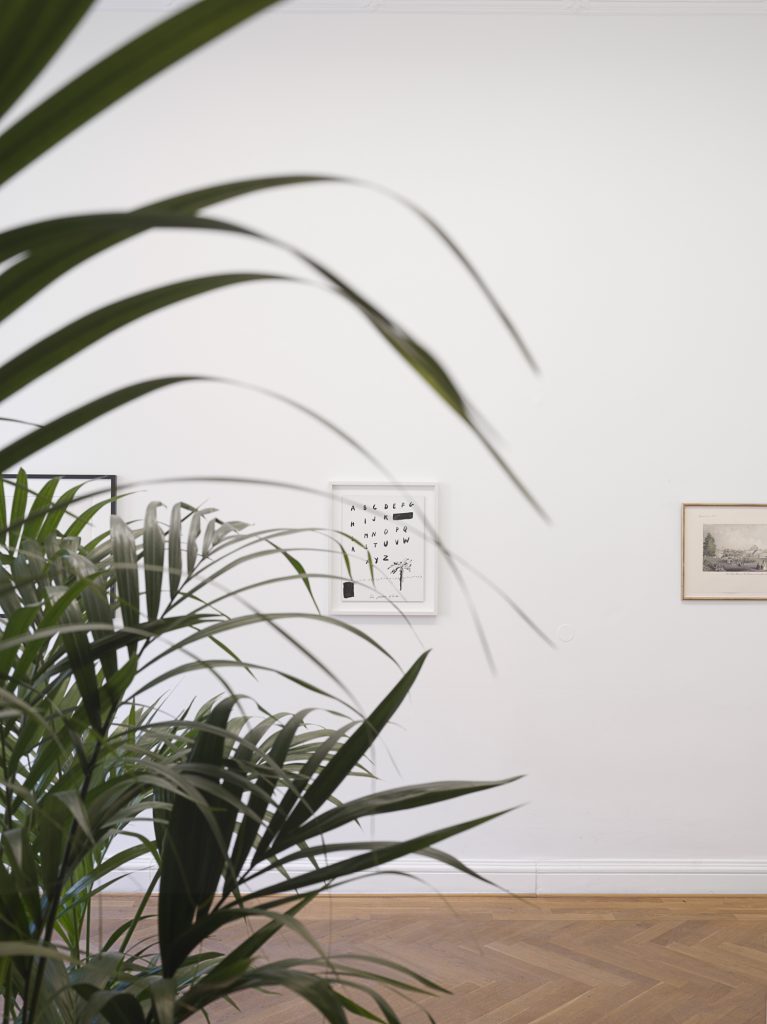 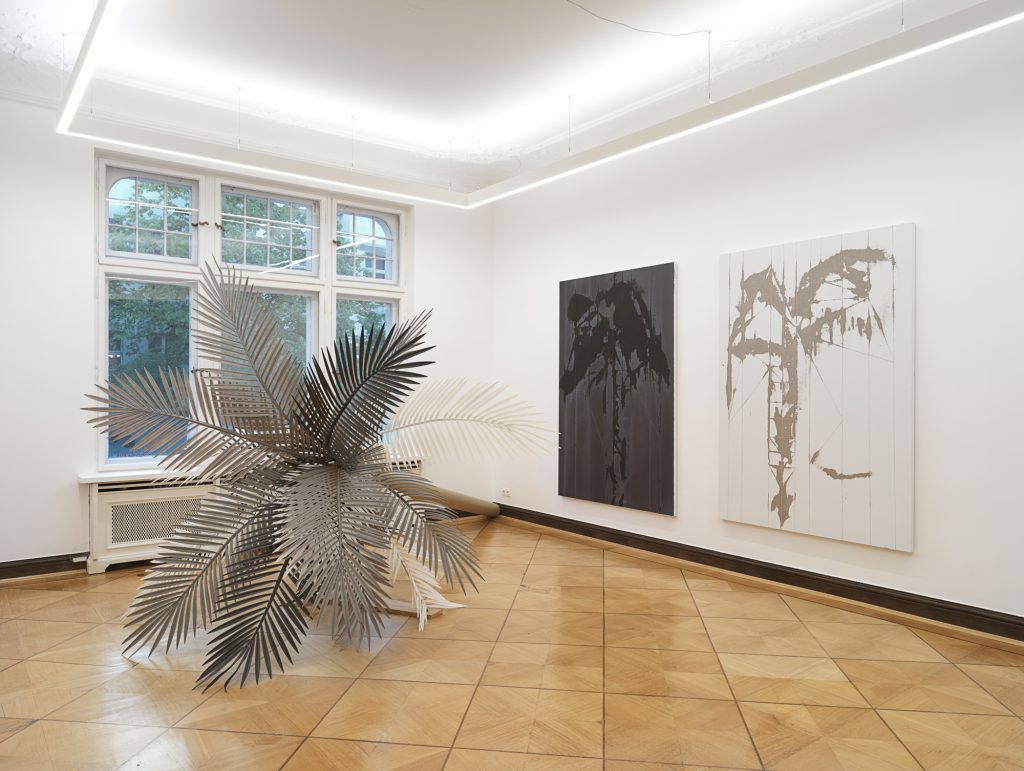 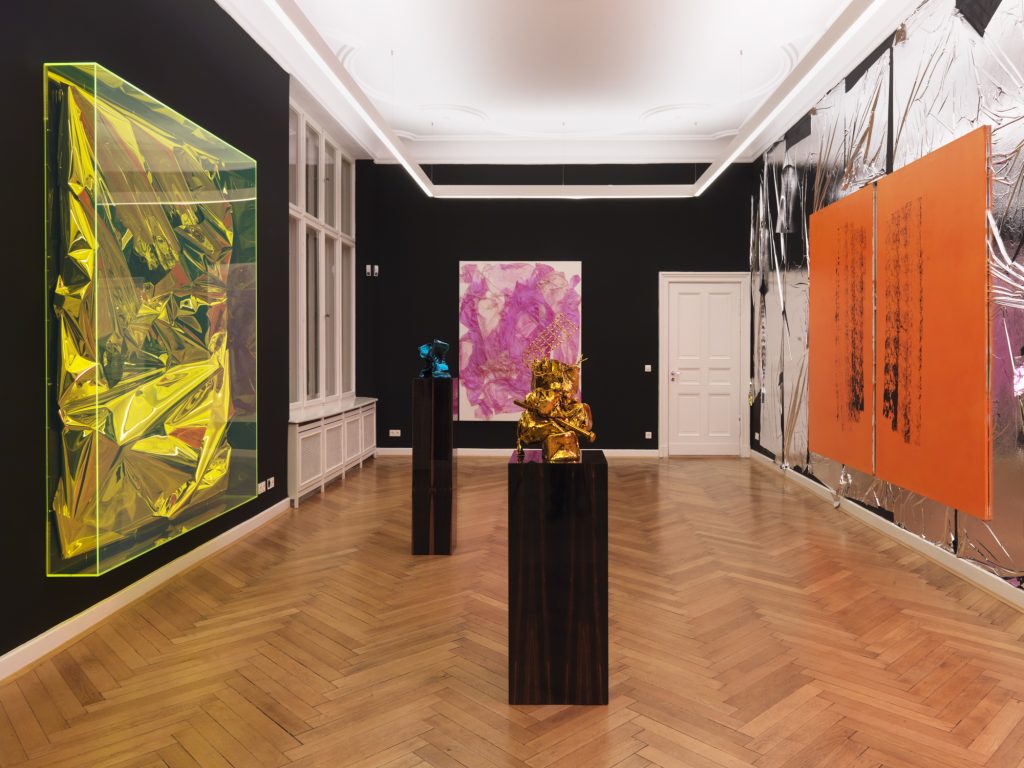 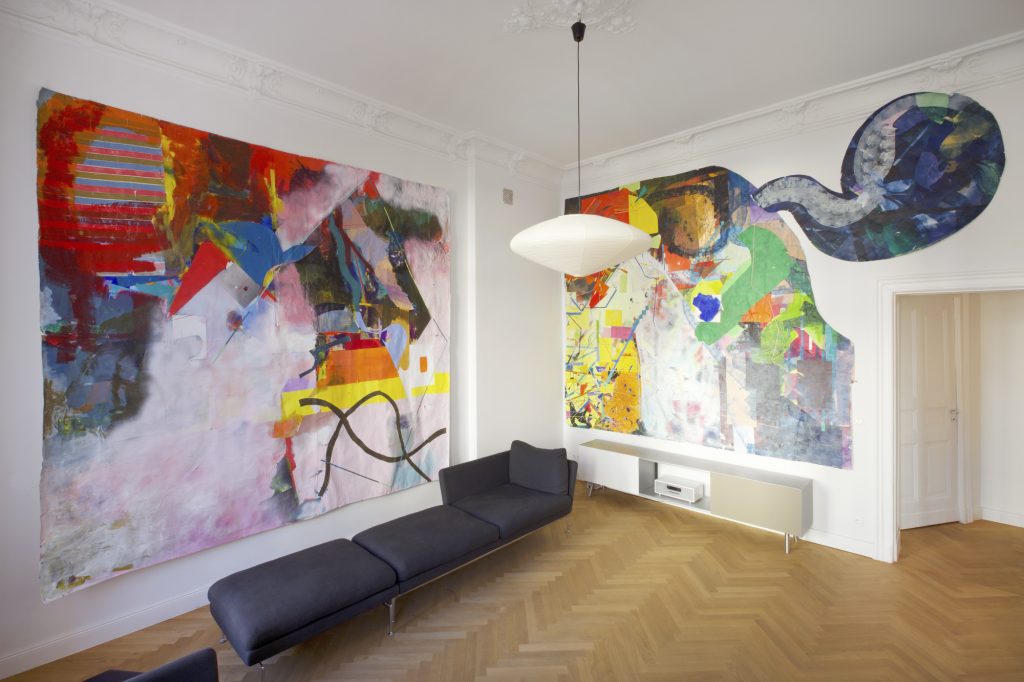 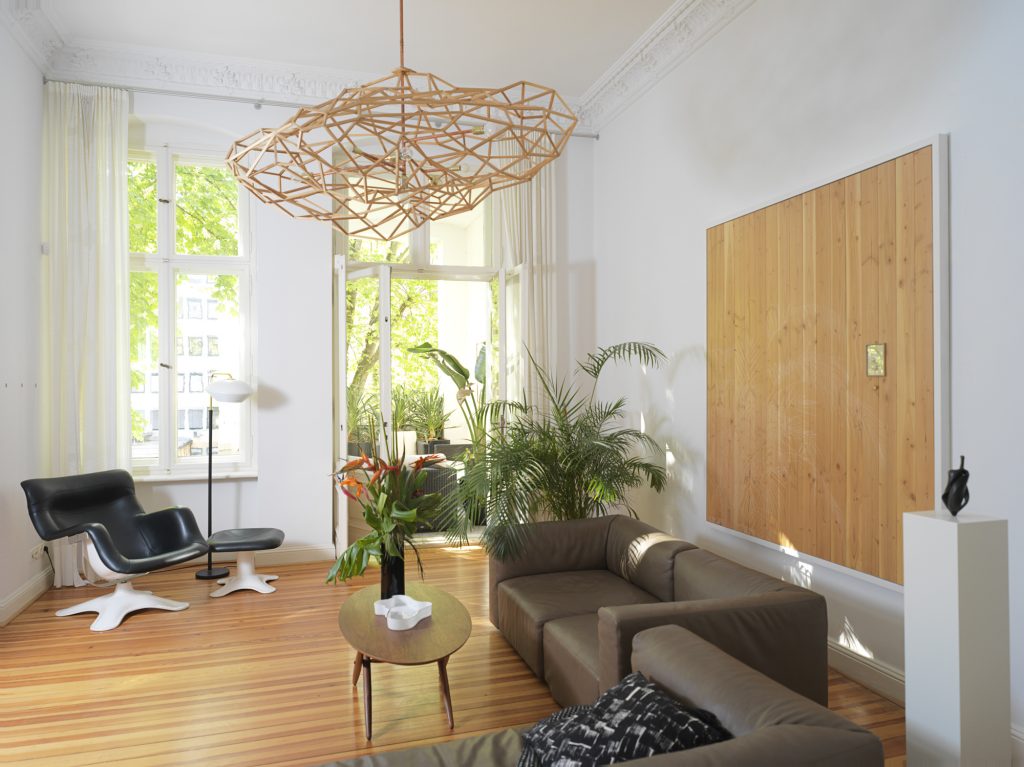 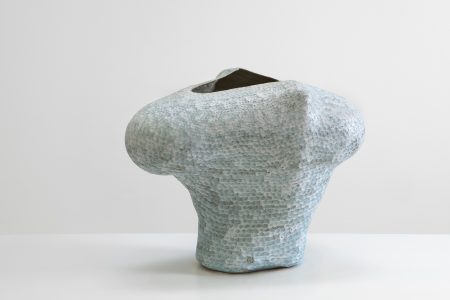 One of Finland’s most internationally renowned ceramic artists, Kristina Riska’s first solo show with Galerie Forsblom showcases two series that each reflect on the artist’s methodology of bringing unknown or looked over ideas into the spotlight. 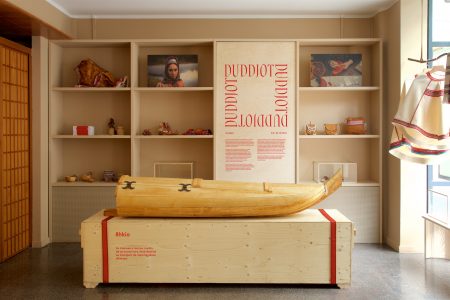 Institut finlandais’ current presentation, Djuddot, is curated by Katja Hagelstam (gallery Lokal, Helsinki) and is produced in collaboration with Sámi Duodji Association. The exhibition is part of the official program of the Paris Design Week.