From pivotal exhibitions in major institutions such as the National Museum in Stockholm, the Egyptian Museum, the National Etruscan Museum of Villa Giulia in Italy and the Met Breuer, to Damien Hirst’s recent project at the Venice Biennale, ancient art still fascinates, inspires and provokes contemporary artists and our sensibilities.

For many, the ancient may be seen solely in terms of preservation and the re-definition of their own future, yet the magnificent town of Volterra in Tuscany – one of the ancient hilltop metropolises of the Etruscan civilisation (8th – 2nd BCE) – is grounded in its glorious past and ancestors. Indeed, antiquity still plays a crucial role in the society, and the Etruscans represent one of the most enlivening stimuli for the definition of the artistic and intellectual identity of the present.

Within such a context, Aevum – part of the exhibition programme, “Timeless Encounters | Contemporary and Etruscan Art”, born out of a collaboration between KALPA Art Living and Guarnacci Etruscan Museum ­­– revolves around the dialogue between artworks of different historical periods, investigating the traces left by the passage of time. The three archaeological artefacts from the permanent collection of the museum tell us about ancient funerary rituals linked to the Etruscan underworld, a true and profound cult of the deceased who, according to their religion, are destined to live eternally even after physical death. The pieces set the bar for the overall atmosphere of the exhibition, of timeless mastery and creation. In light of a Michelangelo non-finito aesthetic, these archaeological objects are seductive artworks while being a testimony to a distant culture. Of unknown authorship, they include a travertine funerary marker, a simply decorated impasto ceramic cinerary vase, and an iconic 2nd century BC alabaster cinerary urn.

The porosity of the textures, the movements, the many fractures and forgotten signs of these pieces establish a connection with the artworks of contemporary artists Akiko Hirai (Japan/UK) and Eleanor Herbosch (Belgium), who were selected by KALPA for the exhibition. In accordance with the gallery’s aesthetics of elegance and simplicity in art and design, contemporary and past, West and East in an all-encompassing wabi-sabi sensibility, the research of these artists aims at creating a stimulating synergy between the idea of fragility and strength, materials, traditions, and innovation with technique.

Hirai’s work appears unfinished or rather, as if it is modified by the passing of time. Sensing the potential of the material, in her series Moon Jars, she explores the idea of contrast, creating a strong juxtaposition of coarse clay and translucent glaze. As a reflection of incomplete beauty and chance, each of her pieces is unique, surprising, of different textures and palettes of colour from deep beige and whites, olive and brown glazes to the palest of blues.

Dialoguing with these vases are Herbosch’s textural paintings, resulting from an artistic process where the painter carefully digs and collects raw earth in the garden of her studio to then mixes this in with acrylics. The use of such an impasto gives prominence to her physical marks on the canvases: earth, inks and acrylic pigments work coherently with one another and are displayed as one. Almost recalling a female ancient ritual of a forgotten priestesses – enriched by repetitive and curative gestures, Herbosch instinctively creates new signs as part of an intimate visual language.

In a timeless quest for capturing a universal human experience in the field of art and creative expression, as well as looking for connections among ancient and contemporary works, Aevum is a place of wonder and reflection. This is a search for traces, impressed by time or left by man, ready to be interpreted. 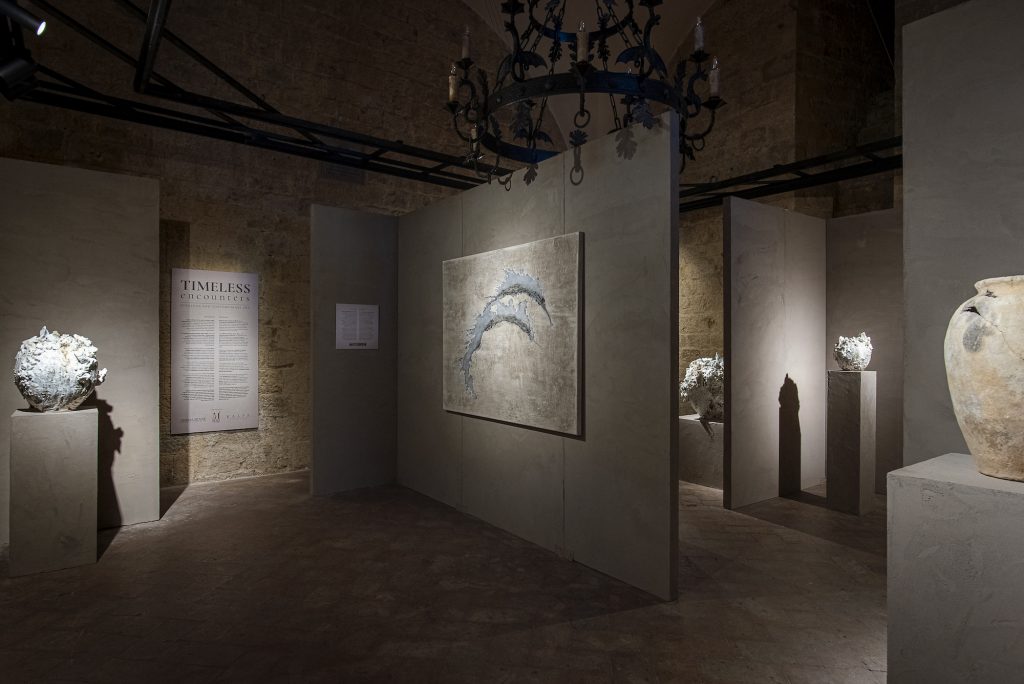 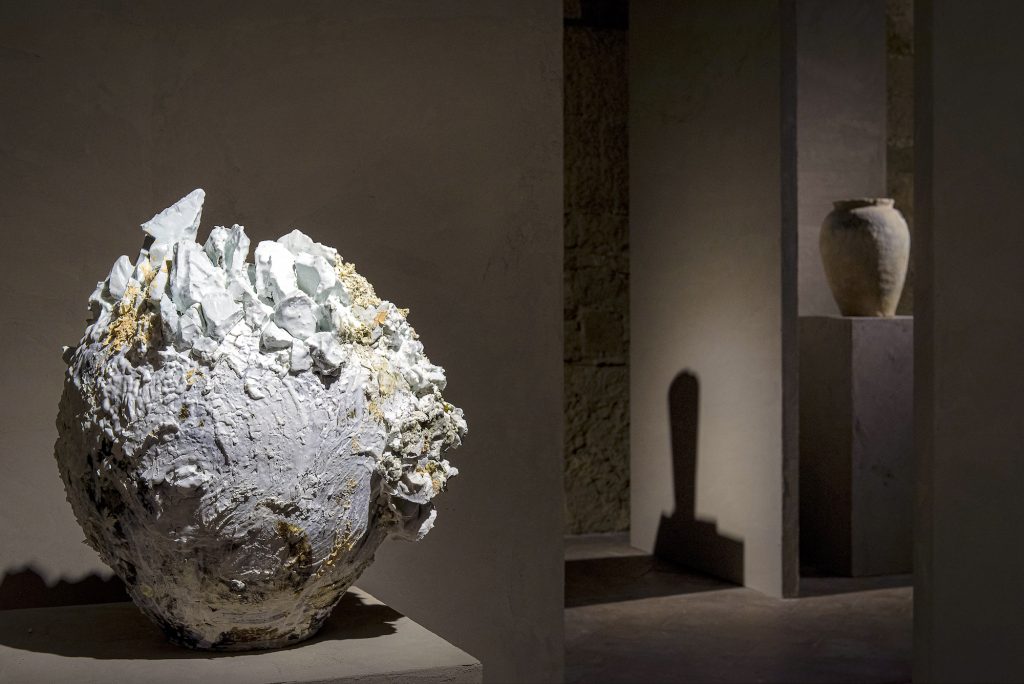 Ceramic sculpture from the series Moon Jars by Akiko Hirai on the left, and 6th century BCE impasto ceramic cinerary vase on the right 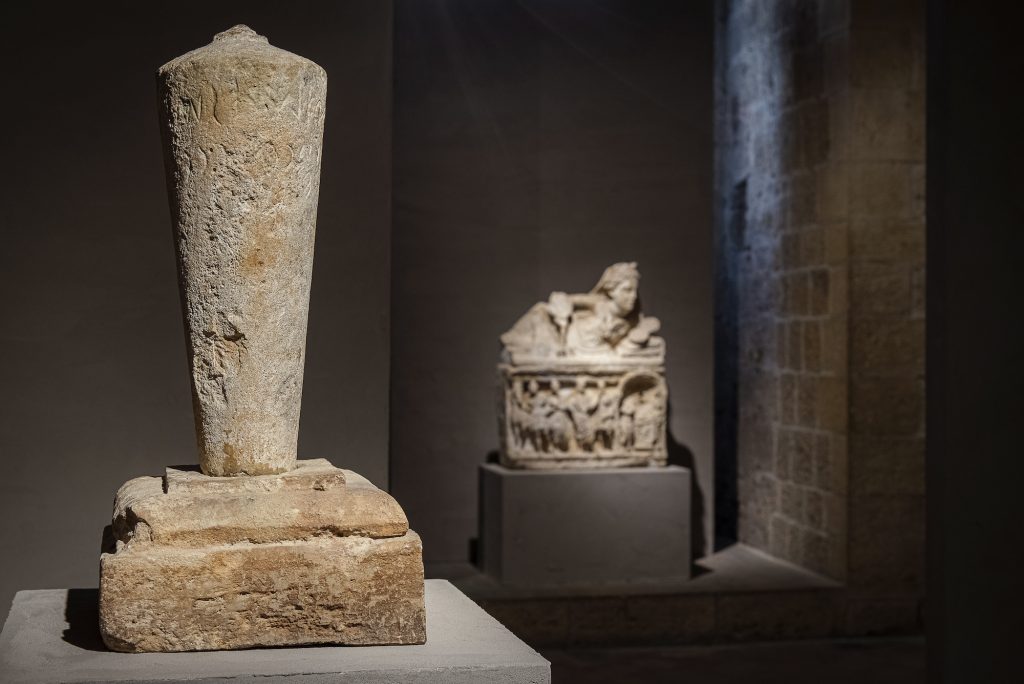 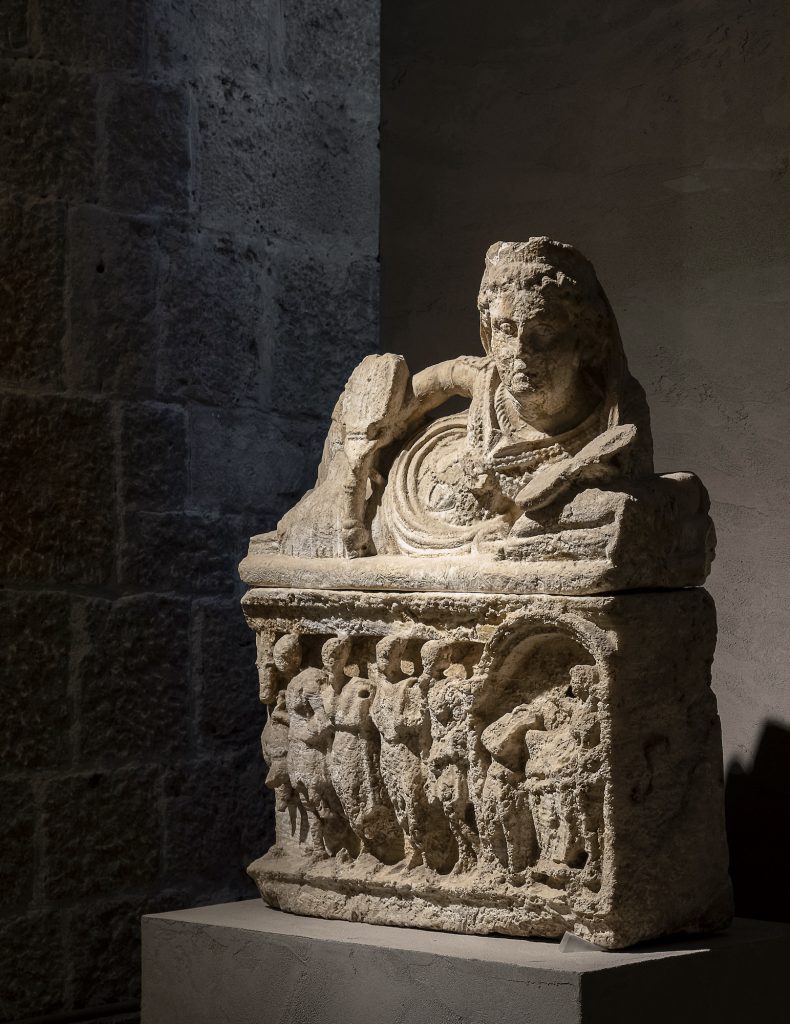 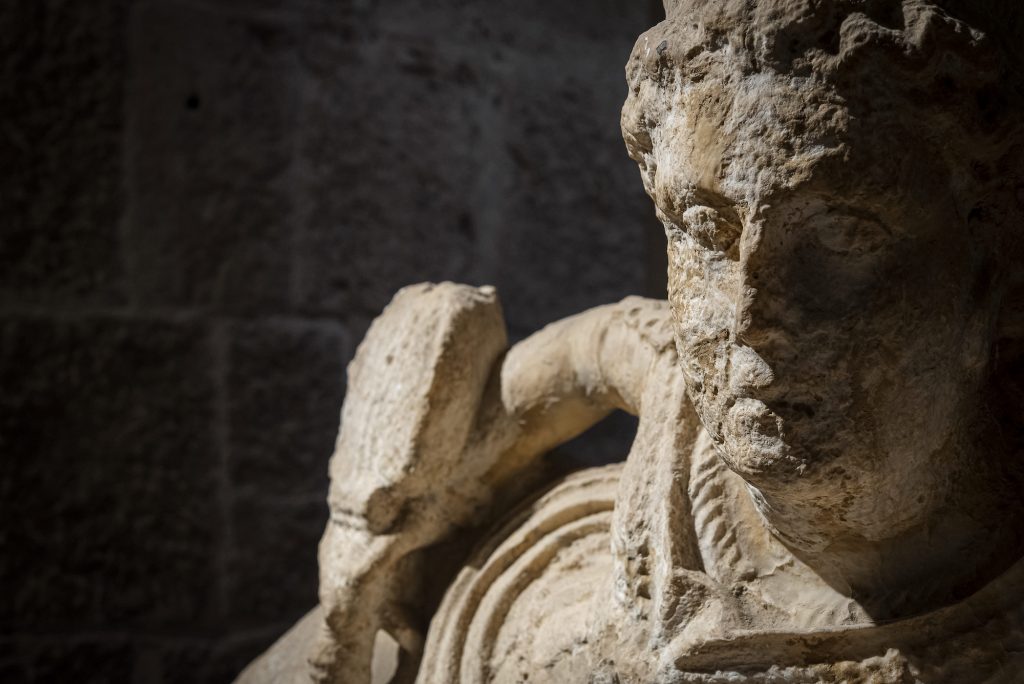 Lid of an alabaster cinerary urn, 2nd century BCE. Detail of the delicate face and upper body of a noble woman 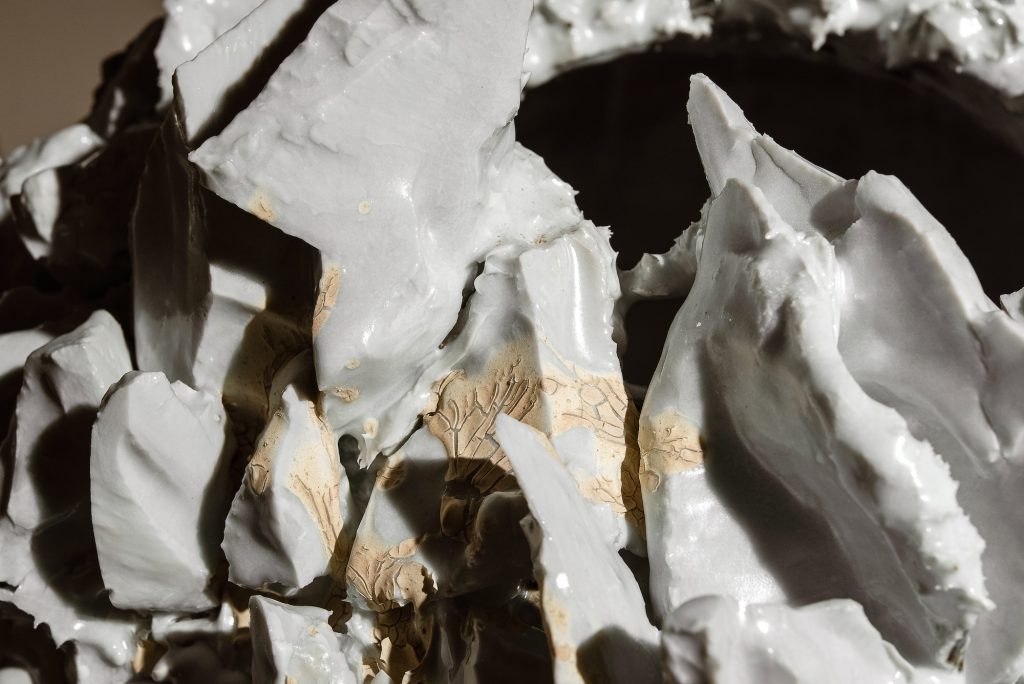 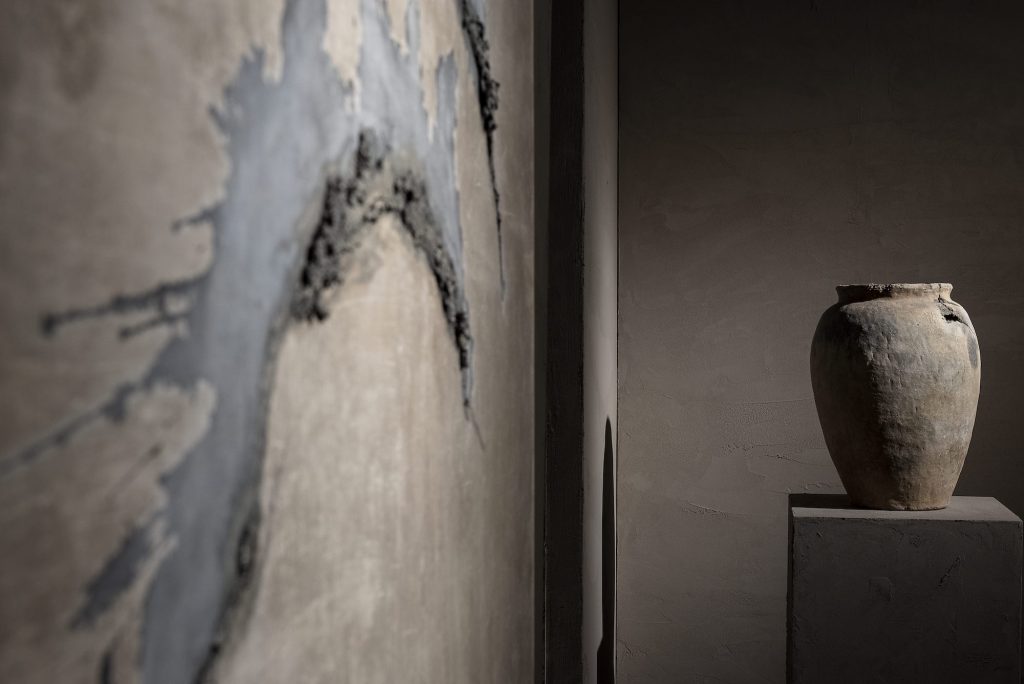 Painting Aevum Series 03 by Eleanor Herbosch on the left, and 6th century BCE impasto ceramic cinerary vase on the right
‹ Back 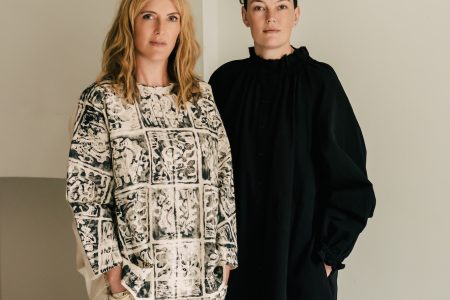 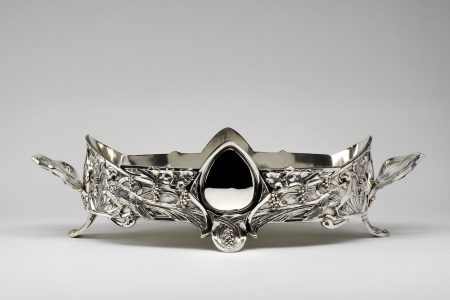