Like the simmering crater of an active volcano, the sculptural ceramics of Brian Rochefort are fraught with unexpected surface tension. Applying layers of slip and glaze on hand formed vessels and then firing them repeatedly to create an extreme crackle effect to the point where they frequently explode, the resulting cups, vessels and wall pieces reveal vibrant colours, fissures, density and textures that at times seem to ooze off the surface. Some of his work, “energy gloops” as he refers to them, seem like they could be samples taken from an eruption site, as if they were dusted off to reveal some sort of ancient chalice caked in freakishly coloured lava. Take a microscope and go down a rabbit hole into the depths of the details found in the yellows, whites, greys, blues, pinks, dots, stripes, and chunks that could suggest the earth’s strata, or the magical flora that hides deep within nature.

Rochefort is not an environmental artist per se, but he has a deeply personal and physical connection to the earth. For more than a decade he has worked nonstop with clay. Using the cylinder vessel form and its lumpier relations, as a canvas for developing his very painterly, expressionist surfaces that reflect his interest in artists such as Willem de Kooning, Yayoi Kusama and Kazuo Shiraga. He has more recently been exploring his medium as a way of grasping, connecting, and challenging the landscape, and both the powerful and fragile beauty of the earth. Growing up playing in the woods of Rhode Island, followed by a couple of years living under the vast skies of Montana, and more recently through frequent travels to places such as the Galapagos, the ATM Caves in Belize, New Mexico and Ecuador, the landscape is seeping into Rochefort’s work. It is becoming earthier in a sense, without compromising its individual experimental-ness.

For many artists, the landscape has a way of sneaking up on them and getting into their headspace; whether an urban-scape, such as with Piet Mondrian when he came to New York City and went boogie-woogie, or Utah and the American West’s influence on Robert Smithson for example. In Rochefort’s case it remains more fragmented and poetic. You see the landscape, but you don’t. He himself sees it as a sort of love letter to these magnificent places which are slowly evaporating or being infringed upon, rather than an attempt to explain it or dominate it. His nearly transcendent experiences in remote locales like the deep forests of Tikal in Guatemala, have left him with a sense of responsibility as well. How can our own individual actions affect the larger world?

Though he was referring to the state of literature at the time, Irish author Samuel Beckett once said in an interview, “To find a form that accommodates the mess, that is the task of the artist now.” In many ways Brian Rochefort uses ceramics to try and get a handle on the mess of the world, not in any preachy way, but as a way to understand it and as attempt to honour and bring an awareness to the beauty as well as the tragedy that is still there in the mess, and there is an urgency in understanding this mess. His repetitive and layered process, the very physical energy that is put into each piece, and which is contained within each piece, is like a study in controlled chaos, a balance between freedom and constraint, creation and devastation.

With a sincere appreciation for ceramics and its history, Rochefort subverts the very medium he loves in order to open it up into something other. He pushes the extremes, transforming the object into something nearly alien, without specific form or function, but rather the results of action and manipulation. “The dialectic between place and change can provide the kind of no-one’s-land where artists thrive,” states critic and activist Lucy Lippard in her introduction to her 1997 book the “Lure of the Local” and it seems as if Rochefort is coming into this zone, where creativity is flowing through the right channels. 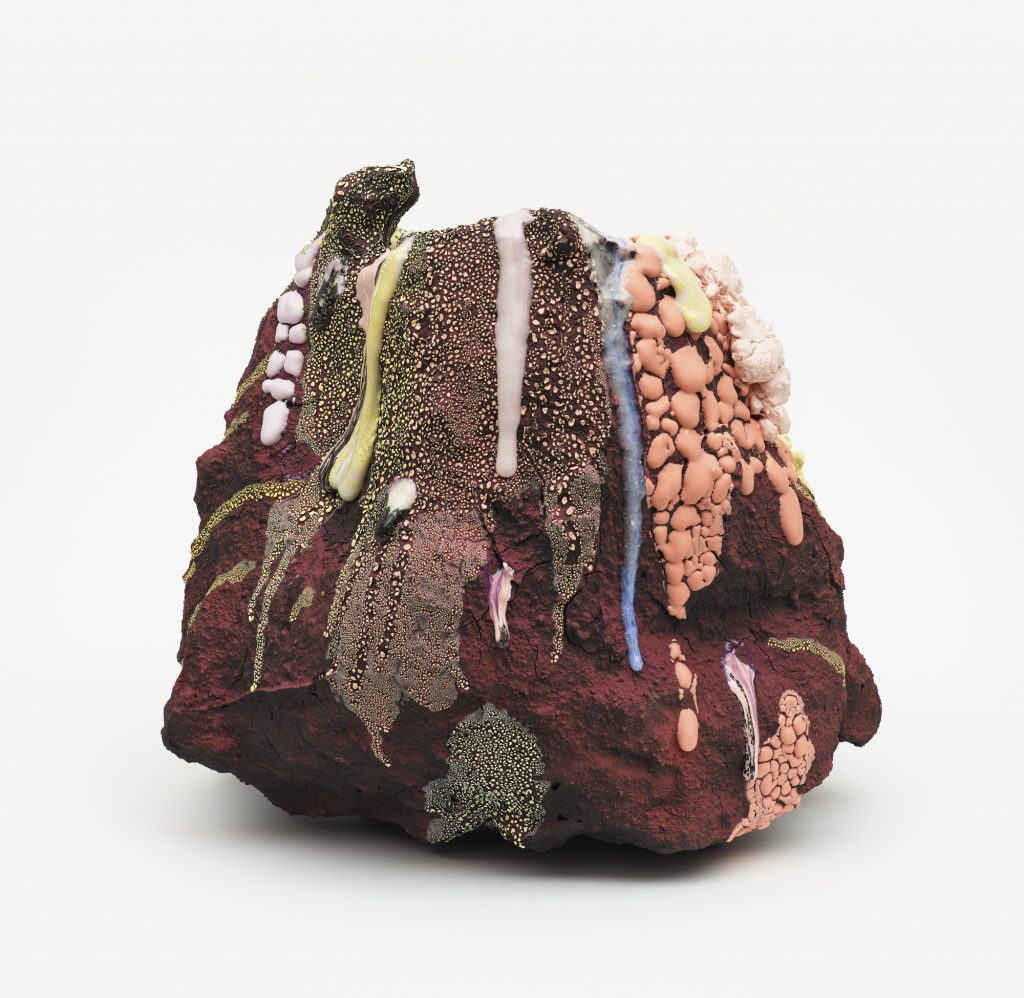 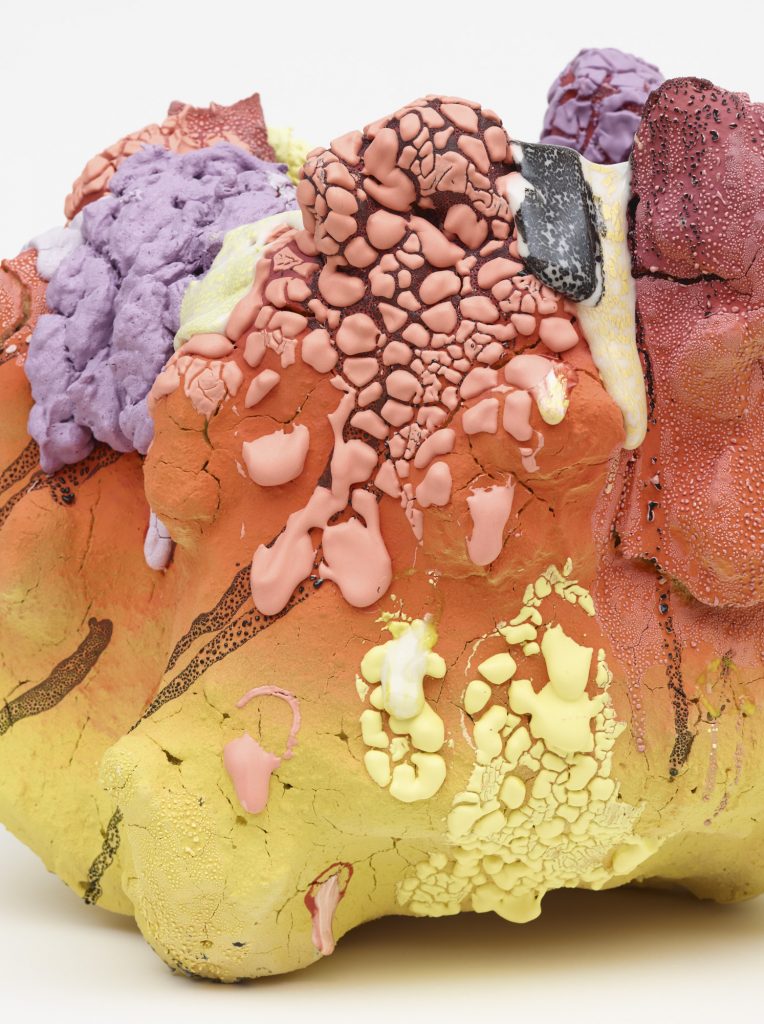 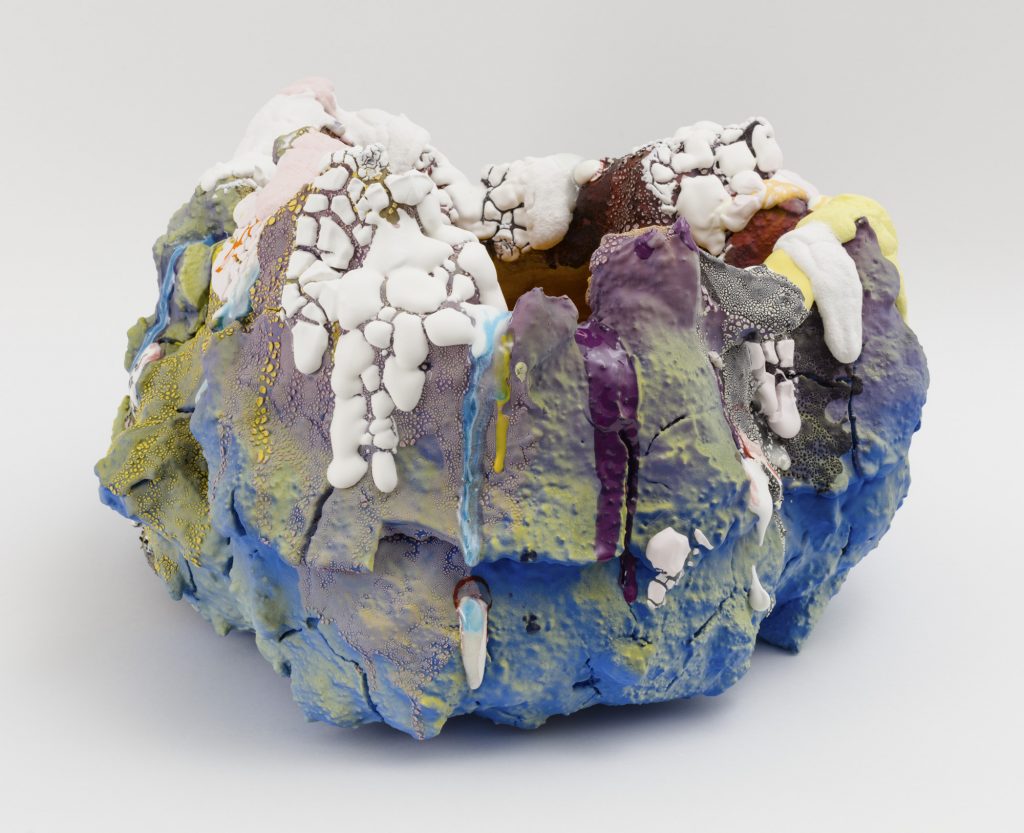 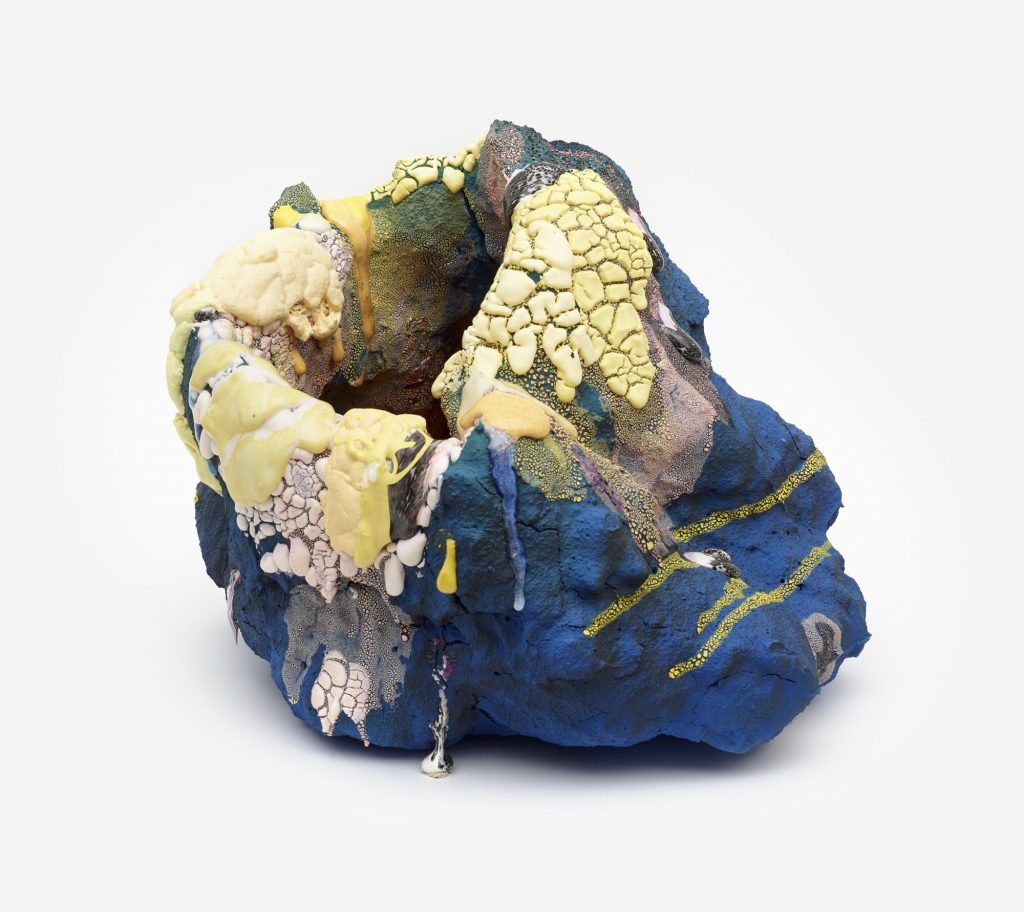 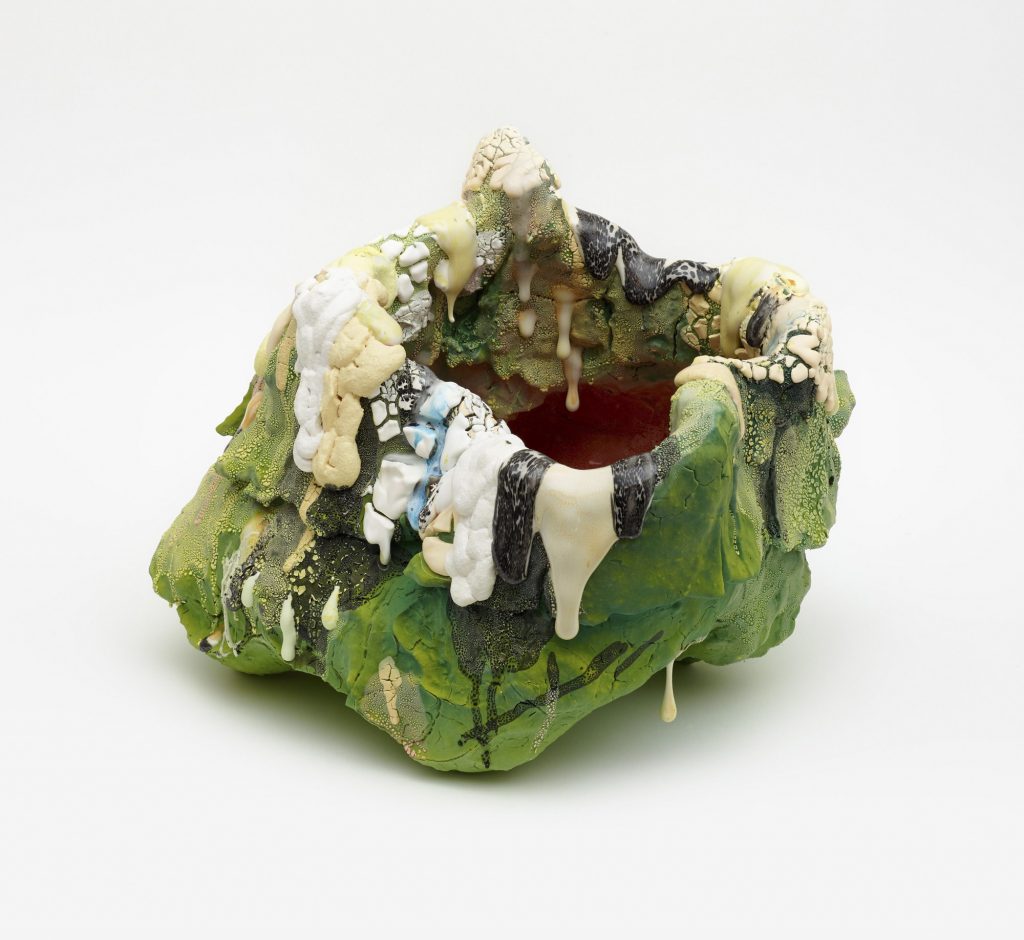 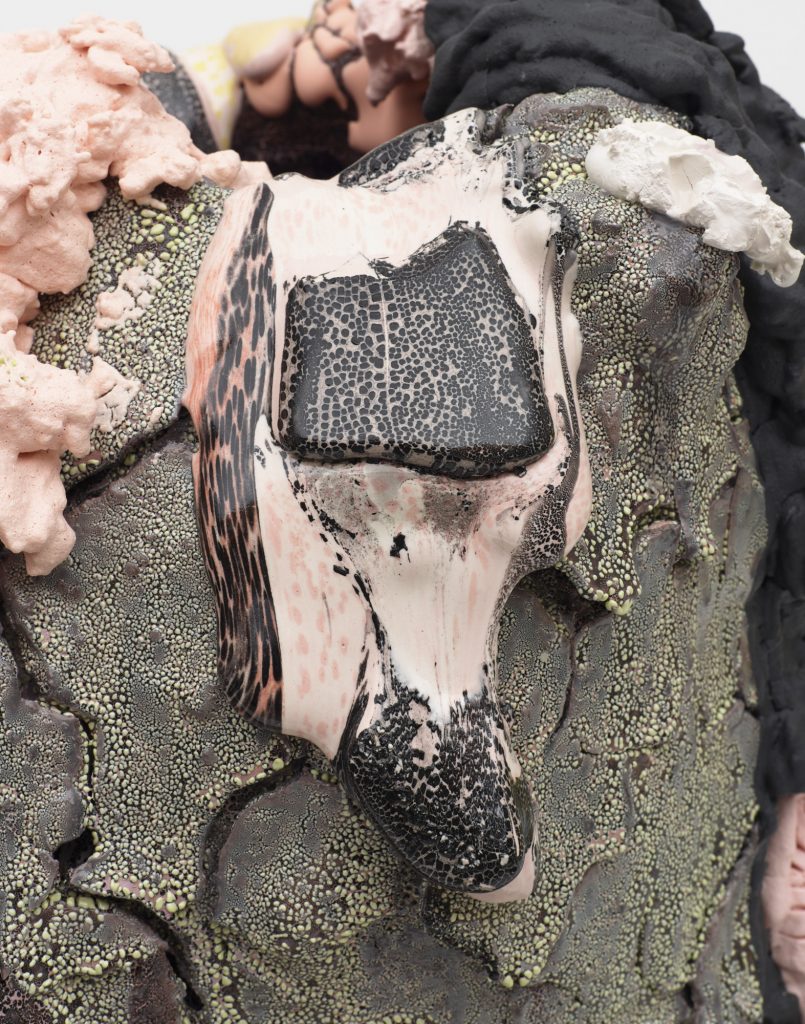