Oohs and Aahs at the DDW

Visiting most of the Dutch Design Week exhibitions is akin to stepping inside a DeLorean headed to 2037. But how did the more present-based displays fare in terms of audience response?

Now in its 16th edition, the Dutch Design Week found ways to further stretch the borders of that second word in its name, analysing matters from the digital to the ethical —from an exploration of the so-called “white spots” of internet unavailability/freedom to questioning the possibilities of fraternal interactions with beings of the robotic kind.

But what about the tangible pieces, the ones that do fit into the mould of the traditional designed object? While some of the subversive, made-for-the-future proposals on display do elicit interior smiles, these very tangible objects had the capacity to elicit very external and unconscious guffaws, oohs and aahs from the visiting crowd —humans, after all, are weak at the sight of beauty, in whatever form it comes. Here, in no particular order, are the pieces that caught vocal attention from several first-day visitors at the event.

ENLIGHTEN US
There is a sense of poetry in how Dutch Invertuals’ Thomas Ballouhey, of mixed heritage, asks himself not to indulge in the prejudice of taking a material at face value. So, what window-treatment brand Luxaflex sees as shades, made to fight light, is the basis of a rather open and sunny sculptural piece by Ballouhey, one of the items in his Proposition. “Despite being pulled from their original setting, the repetitive aesthetics feel strangely familiar,” he explains.
Honourable mention: The Design Academy graduate is one of six Invertuals designers who were assigned the task of reimagining the possibilities of Luxaflex products, and the result is an exhibition titled Enlighten. Another enlightened hit? Mieke Meijer’s 59, a Luxaflex-meets-Calder-meets-Fisher-Price geometric installation —a motorised mobile for grown-ups.
But also: A few metres away at the Fuutlaan location is Fundamentals, a glimpse —and by “glimpse” we mean more than 800 objects— into the private collections that explain the interests and personalities of 45 Invertuals.

THIS LASER KNOWS HOW YOU FEEL
The mood rings of the 70s are back, now with more lasers: at We Know How You Feel, the VPRO Medialab is substituting the termochromic elements in rings for wearables that measure body variables, such as an adult’s heart rate. Instead of being reflected on liquid crystal, AURA —commissioned to Studio Nick Verstand— displays the “moods” of the participants through a trail of laser marble that ends in blob-like orb on the floor.
I’m feeling myself: While flashy and visually intriguing on its own in its current iteration, the most attractive part of this project is actually, its future possibility: as VPRO is a broadcasting company, they are focused on using this technology to help edit media content in real time to cater to the specific tastes of, say, podcast listeners and Netflix viewers —and we’re surely up for anything that can automatically provide less Narcos and more Club de Cuervos.

NOSEFERATU
The world is starting to grapple the importance of smell, that oft-neglected sense that is actually connected to our food intake and our memory functions —and currently, olfactive imbalances are used by the medical field to predict and prevent neurological complications. Through DIAG/NOSE, a series of phone-friendly tubes at Justine Kontou’s Contemplation Spaces exhibition, Studio Tijdmakers tests the health of that particular sense.
Future idea, though: If someone could use this technology to make stroopwafels temporarily taste like stamppot, say, in time for summer season, some people would be very thankful.

VAN LIGHT TOT DARK
Here’s one for the product design enthusiasts: Local duo VANTOT created lamps that, through a deceptively simple pull-down mechanism and a frosted-glass degradation, create a manual dimmer effect —what they call Current Currents. While Esther Jongsma and Sam van Gurp are based in the innovation-friendly Sectie-C designer lot —Jongsma herself is part of the new board of the increasingly popular studio spot—, they turned to tradition with the production itself: the lighting mechanisms were made in the Netherlands and the glass components were produced in the Czech Republic.

ONE FOR THE INSTA HUSBANDS —AND THEIR NEIGHBOURS
It might be our prediction for the most Instagrammed spot during DDW17 —we witnessed the full force of the Insta-husband phenomenon during a visit to the Market Square—, but behind the colourful appeal of W(EGO) is an uncomfortable question from MVRDV —whose Winy Maas is one of this year’s DDW ambassadors. What would happen if we saw our home walls as less fixed? This is Aravena-like thinking on the opposite direction: instead of expanding our homes, what if we considered reducing them for the sake of the life stages and economic necessities of the people who surround us? Indeed: leave your ego at your neighbour’s door.

R&D AND THOSE CRAZY KIDS
UK building-material company Low&Bonar used to think that the effects of Colback, a technical fabric mainly used in transportation and interior carpeting, should be felt and not seen. Bring on the Dutch designers: through a collaboration with 10 young creators, they’re exploring the very visible possibilities of the material. The result is in4nite, an exhibition that presents the likes of Rick Tegelaar’s screens, made with a 3D yarn printer, and Joris de Groot’s laminated-felt pleated chairs.

But probably one of the most visible instances of designers collaborating with the R&D department comes from national train company NS. Due to its small size, the Netherlands is a massive commuter country: it’s a rather normal occurrence to have an unlimited monthly travel card that allows people to live in one city, hop on a train and then onto their second bikes, parked at the station of the city where they work. Therefore, the Dutch do spend a rather inordinate amount of time on those yellow-and-blue compartments, and the NS is trying to find opportunities to better employ those stacking minutes. While some want commuters to work on their abs through specialised cushions —Enrichers’ Govert Flint is known for his focus on body-movement design—, Jan Pieter Kaptein wants NS users to exercise their brains with the MindfulNS app.

The train service decided not to name the exhibition the “Train of the future,” something more aligned with the spirit of DDW, but instead, the “Trein van morgen” —the train of tomorrow. And they mean “tomorrow” quite literally: MindfulNS started its DDW prototype trial run a few days ago and, if the public so decides at the end of this design week, it could stay on indefinitely. 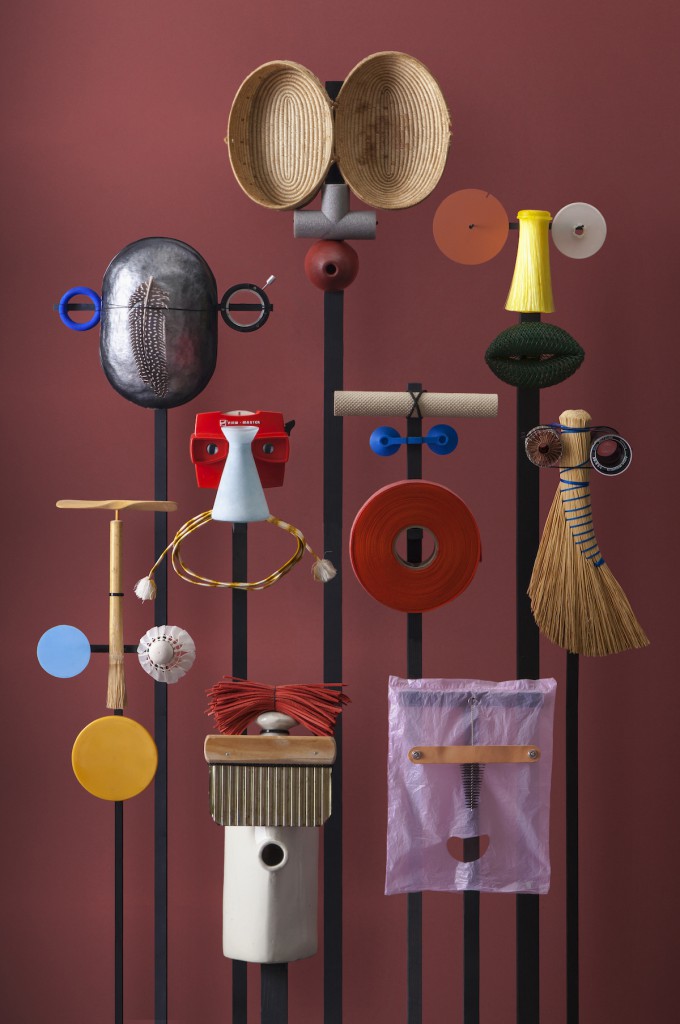 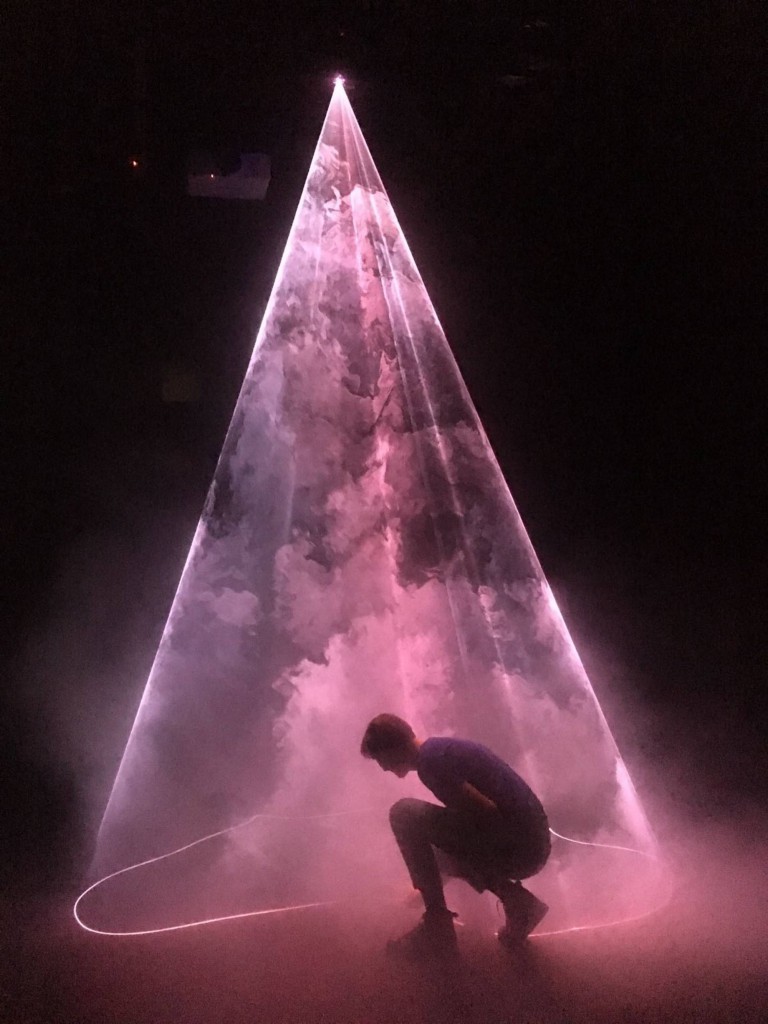 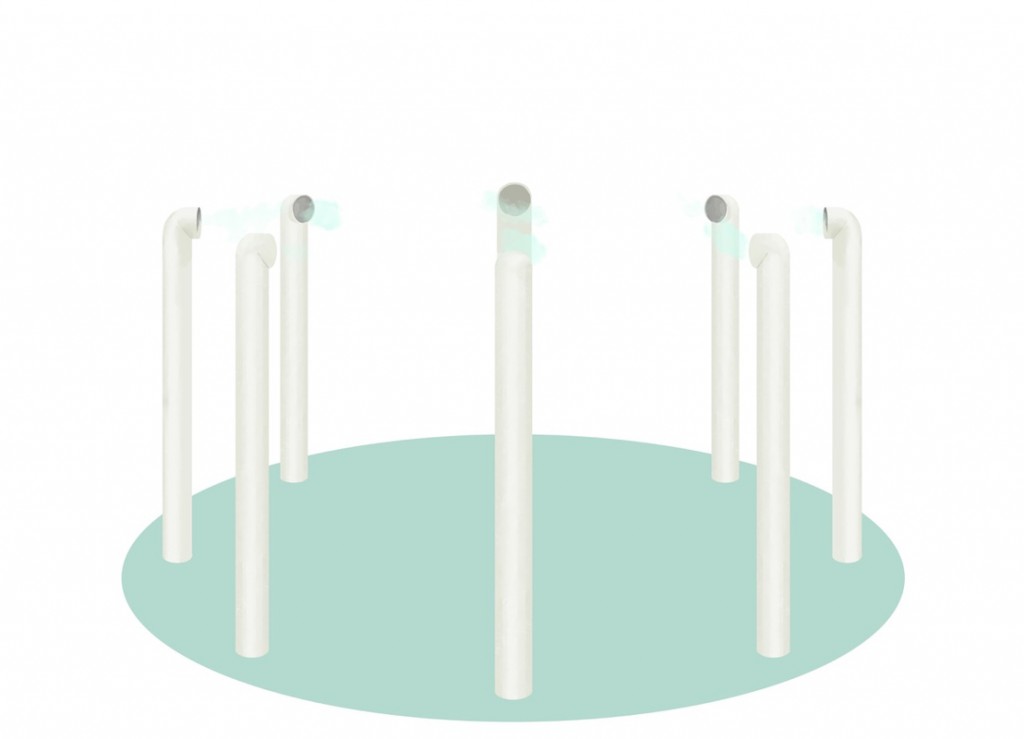 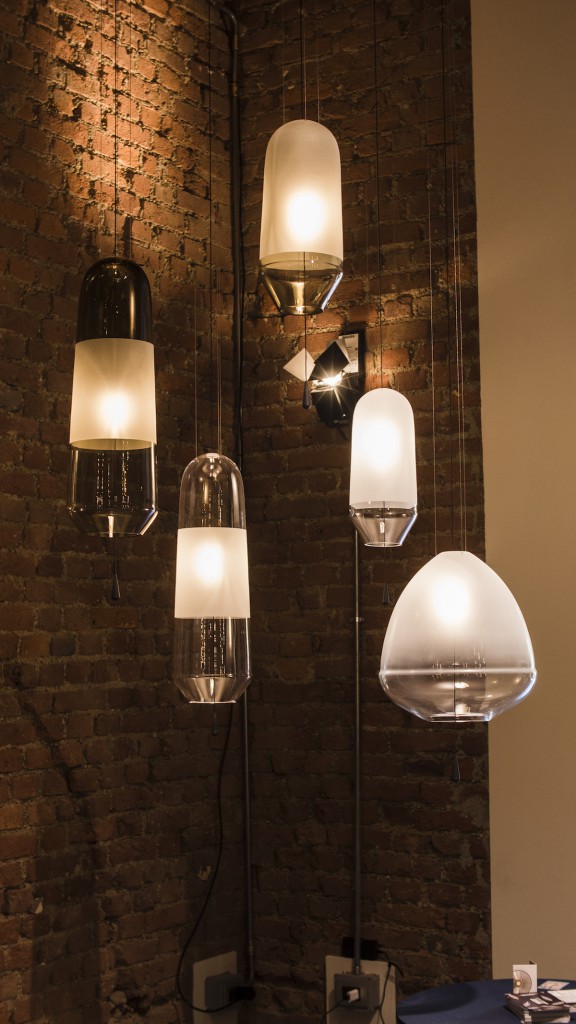 A group of VANTOT's frosted-glass lamps 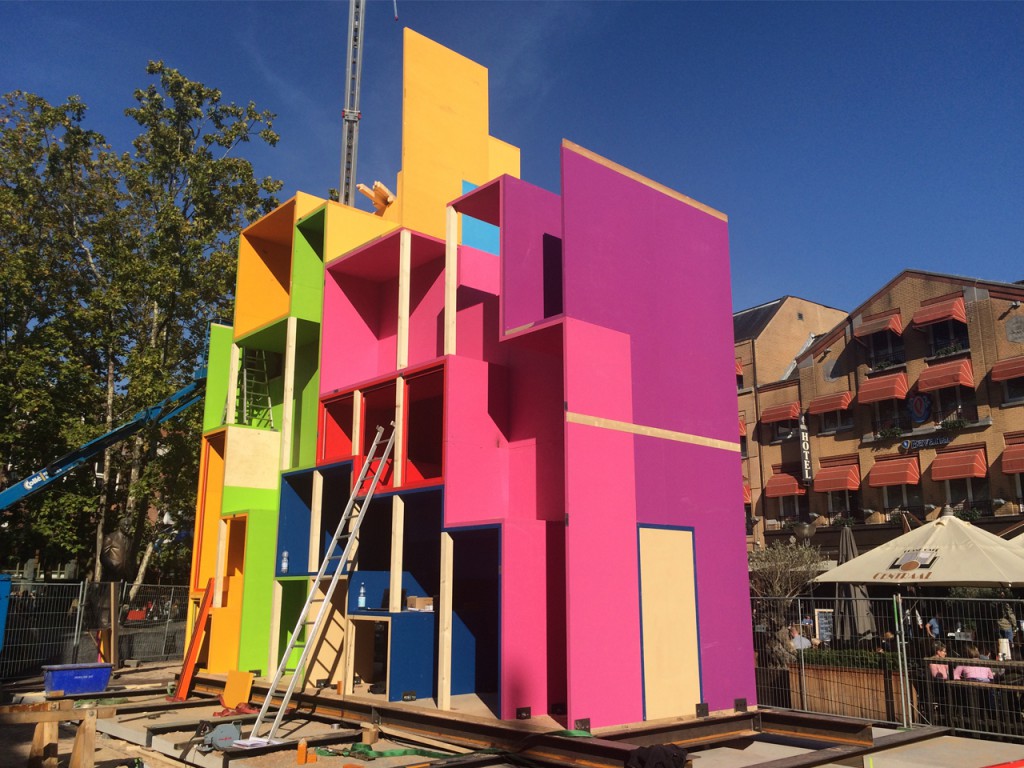 How can we go beyond our W(EGO), asks MVRDV? 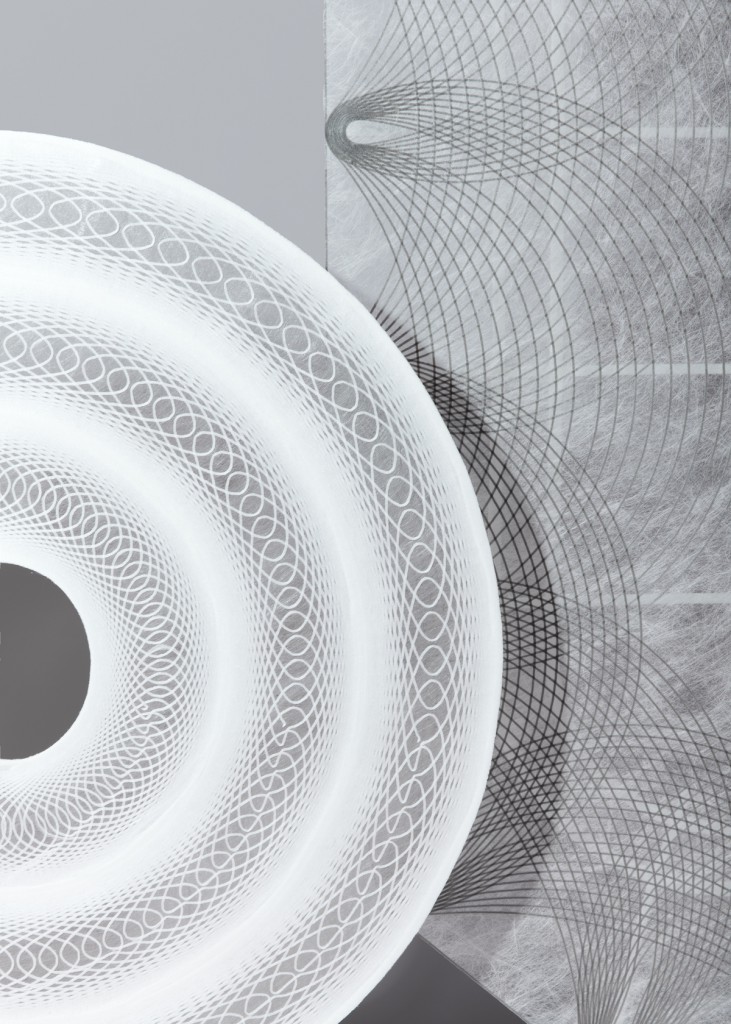 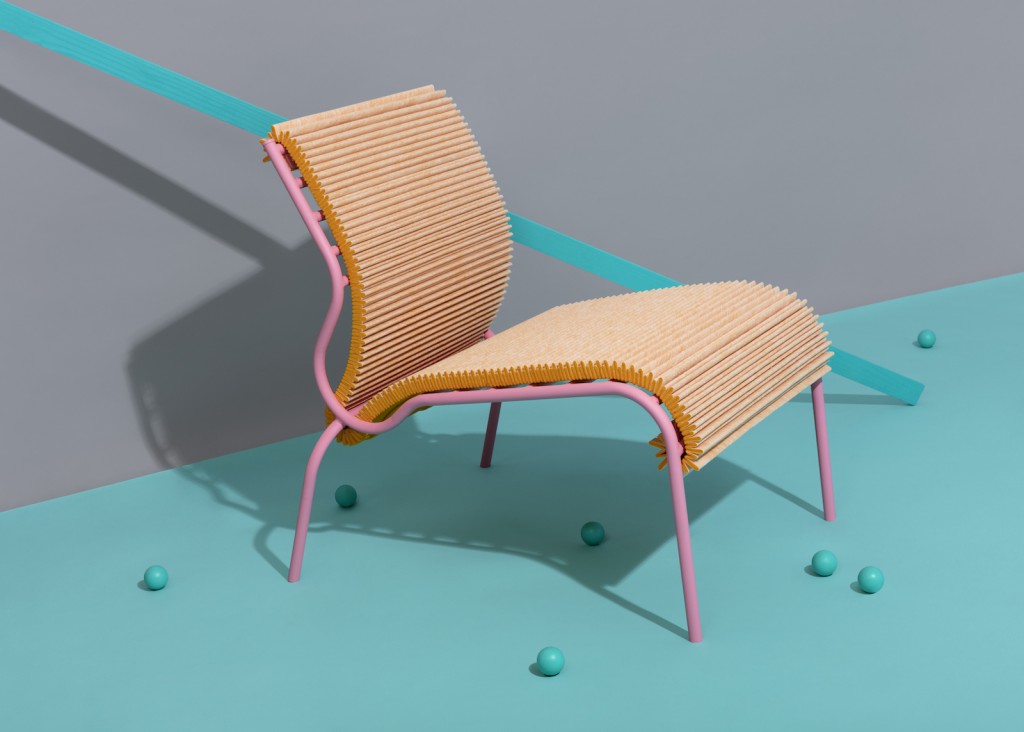 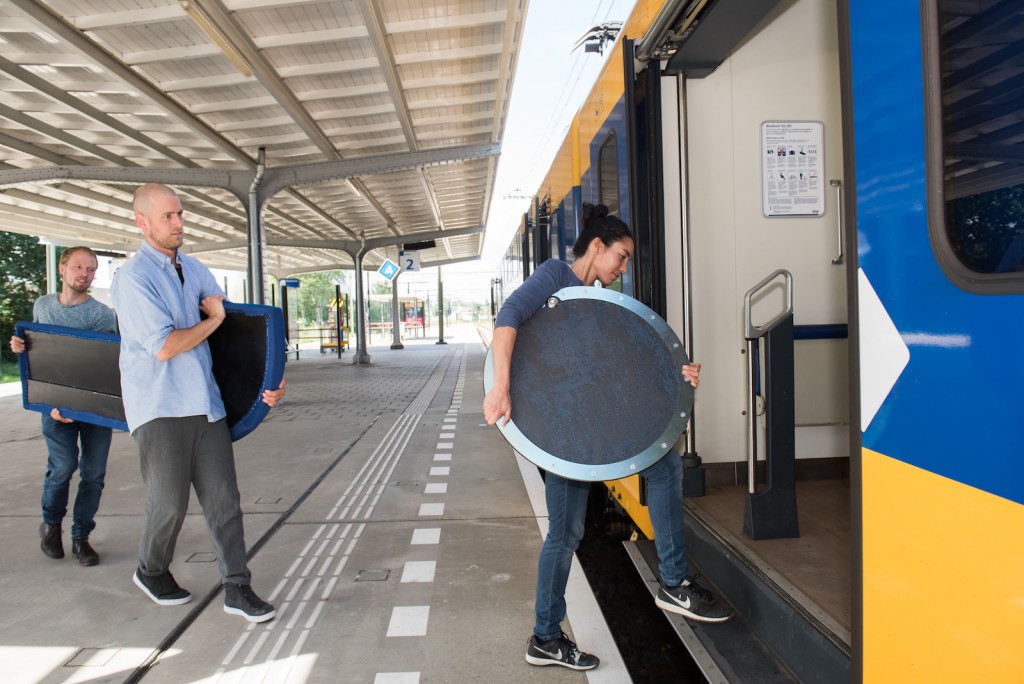 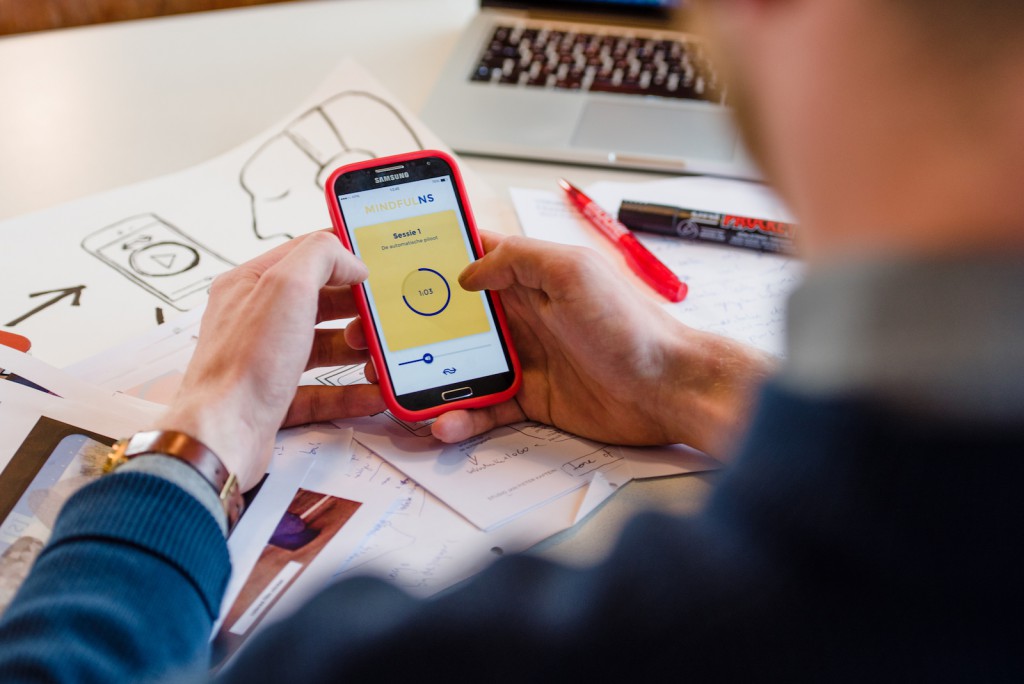