Starting as a project curated by Gijs Bakker called the Yii Project back in 2010, A New Layer has now become an established network that creates an understanding between international designers and local Taiwanese craftspeople. Now, nearly ten years since Yii and a second exhibition titled A New Layer I, the ongoing project continues to be led by the National Taiwan Craft Research and Development Institute (NTCRI). Since its third instalment titled New Layer II in 2012, the project has also been carefully curated by Lise Coirier; art director of Pro Materia and Brussels based Spazio Nobile Gallery. Earlier this month the retrospective exhibition, Formosa: A New Layer Taiwan meets Yii, opened at Coirier’s Spazio Nobile gallery with the scenography of British-Taiwanese designer Rain Wu. The show, a retrospective presentation highlighting a decade of local and international craft, art and design collaborations with Taiwan, showcases this unique cross-cultural platform of art and design in a European setting. Here, TLmag sat down with Rain and Lise to talk about the name of the exhibition, how exhibiting everyday, cultural objects can change the way we perceive them and the use of bamboo in (exhibition) design.

The title of the exhibition, Formosa, means ‘Beautiful Island’;  a name used to describe Taiwan as the Portuguese occupied it in the middle of the 16th century. As A New Layer has opened an ongoing dialogue between Western and Eastern designers, the name calls back to a time when these two cultures first clashed. As Coirier elaborates; “The forest-cloaked land that is Taiwan has a strong character, and its crafts and qualities are particular, unique and distinctive. Formosa is a title which embraces its history, culture, art, and design, as well as the island as a place for creation. It includes rich dialogues, exchanges, and explorations of creative craft and design from here and abroad.”

Specialising in everything from ceramics and Koji pottery to bamboo bending, lacquerware, and indigo dying, the selected Taiwanese craftsmen each partnered with one of seven international designers or teams to develop contemporary objects and furniture based on their traditional methodologies. Within the gallery space, these “everyday” objects such as chairs intricately woven out of bamboo (created by Jian Cheng Lin) or a tea set (by Rain Wu) are put on display. It is in this space that these objects can maybe even stand in for their own (hi)stories and continue the dialogue from which they are created. In the case of Wu’s Tea Set, first created in 2016 during a residency at Design Museum London (UK), the object represents the designer’s dual identity by becoming a series of narrative sculptures to illustrate the historical, cultural and colonial history around a ‘British cuppa’ through a devised ‘tea ceremony’ with Eastern attention and appreciation. “This piece is very unlike most of my other work, and with every time I exhibit it, I think I grow to like it much more. I think now especially, in the context of Spazio Nobile and because of its part of a Taiwanese group show and because it’s a dialogue between these two cultures, in a way these two parts of myself.”

“A particularly interesting aspect of this show is how many of the designers that have participated in Yii, New Layer I and II have evolved. For instance, the work of Kao-Ming Chen, who created FLOW during for the Yii Project, started to learn and specialise in these crafts to make his designs”. Wu explains;

“He’s become a combination of a craftsman and a designer, which, to me, is the new generation of the New Layer projects: a creator where craftsmanship becomes an integral part of their work and design. Another work of his that I find particularly interesting are these traditional baskets woven out of the five different kinds of bamboo which can be found in Taiwan. When I see the baskets in these spaces, which are objects that I know very well, I found myself really ‘seeing’ them for the first time. I began to wonder how they were made and, even now, having looked at them even closer” — she exclaimed: “They’re amazing, I don’t even know where to begin!”.

Bamboo as a material and the traditional craftsmanship of bamboo weaving and bending has a particular focus in this exhibition, as it is not only an environmentally friendly choice but also has great cultural significance. “For Taiwan, these kinds of dialogues are particularly important because crafts come from a material tradition; the bamboo that grows around the island, the ceramics that made for religious temples and the decorative roof tiles. I think, for a long time, Taiwanese craftsman haven’t passed on their knowledge to their children — usually advising their kids not to follow their paths and get ‘normal’ jobs. Nowadays, as that generation is getting older — we see a revival in this field, more and more people are becoming interested in learning these crafts, and there’s a much greater appreciation for it.”

Later this year, Formosa will be exhibited with new scenography at the Grand Palais during the Révélations Biennale in Paris. Here, the objects created by these unique collaborations will be showcased on bamboo platforms, highlighting the raw materials from which they were made and contrasting it with the refinement of the crafts. Describing her approach to this change of venue, Wu states “We’re trying to combine both culture and form in the works of this exhibition, it’s about so much more than the way these objects look but about the place where they come from.”. Another element that the scenographer kept in mind is her environmental impact, an important thing to focus on as the materials used for temporary exhibition design is so often thrown away after a short period of time “The bamboo platforms in the exhibition are going to be bound together by rope, so they can be loosened and repurposed after the Biennale. This method makes it super easy to reassemble for another exhibition, as the materials aren’t altered or damaged after use. I’m also thinking about using the materials in a workshop for Van Eyck Academy’s (NL) outreach programme for example, where I’m doing a residency now.”

Formosa: A New Layer Taiwan meets Yii is on view at Spazio Nobile Gallery until the 12th of May 2019 and will be on view at the Révélations Biennale from the 23rd until 26th of May 2019. The exhibition is supported by the Taiwanese Cultural Center in Paris, the NTCRI (National Taiwanese Craft Research and Development Institute), the Taiwanese Ministry of Culture and Spazio Nobile / Pro Materia. In collaboration with Lobmeyr (AT), Lyngby Porcelæn (DK), Thalie Lab (BE). 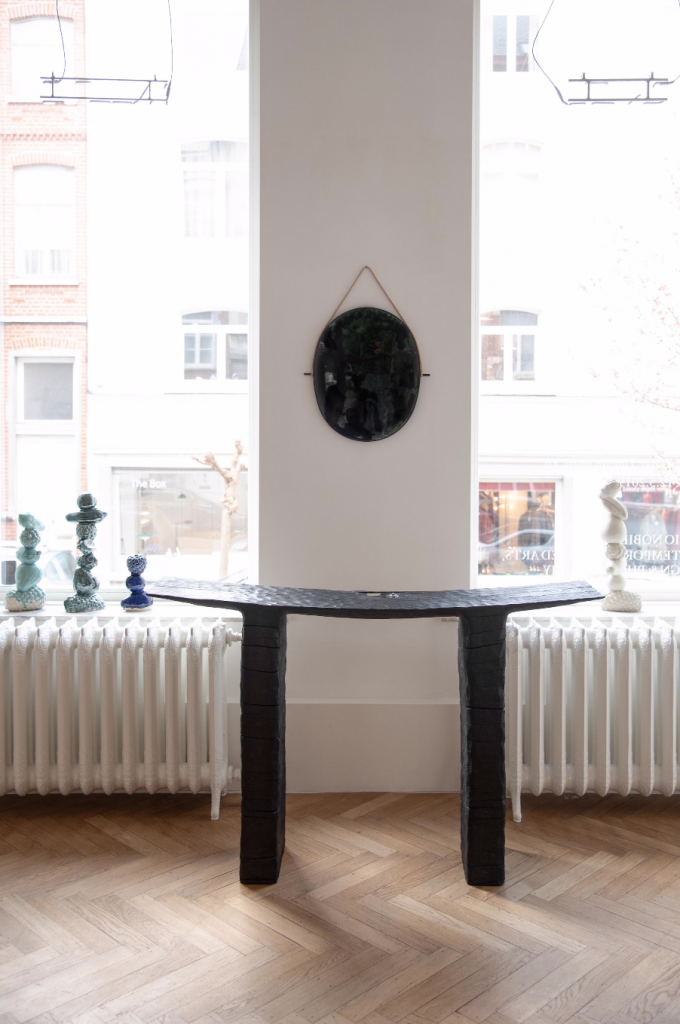 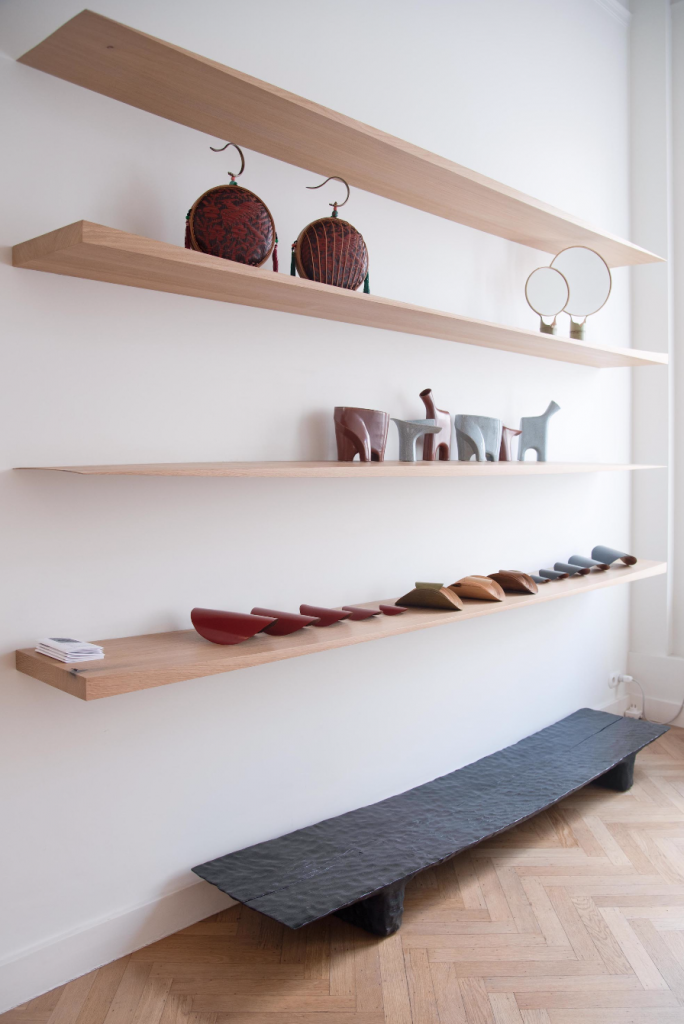 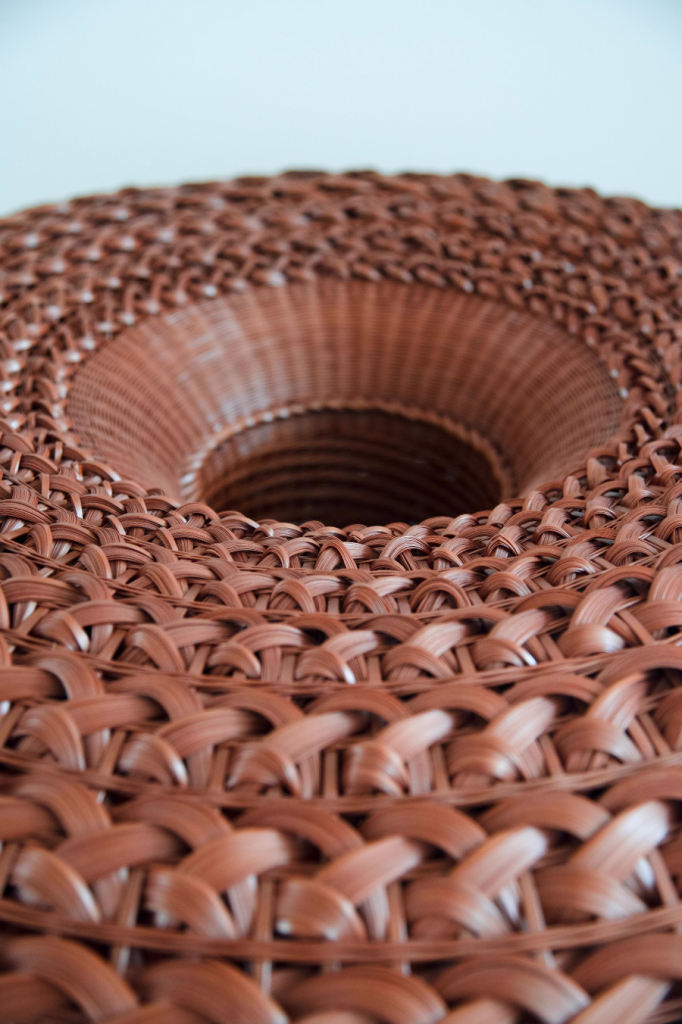 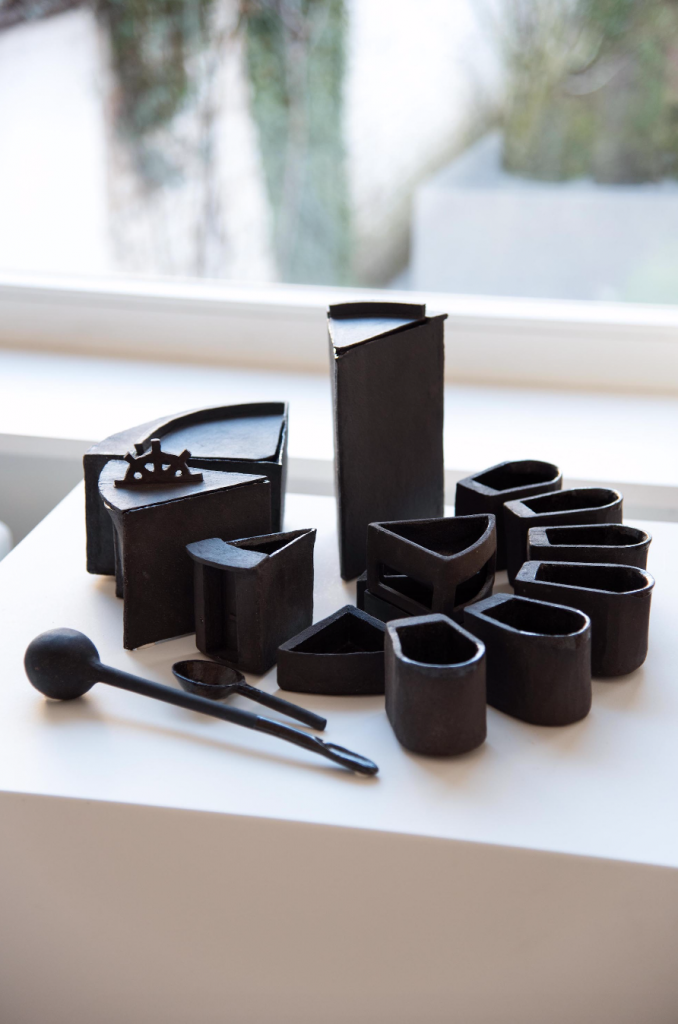 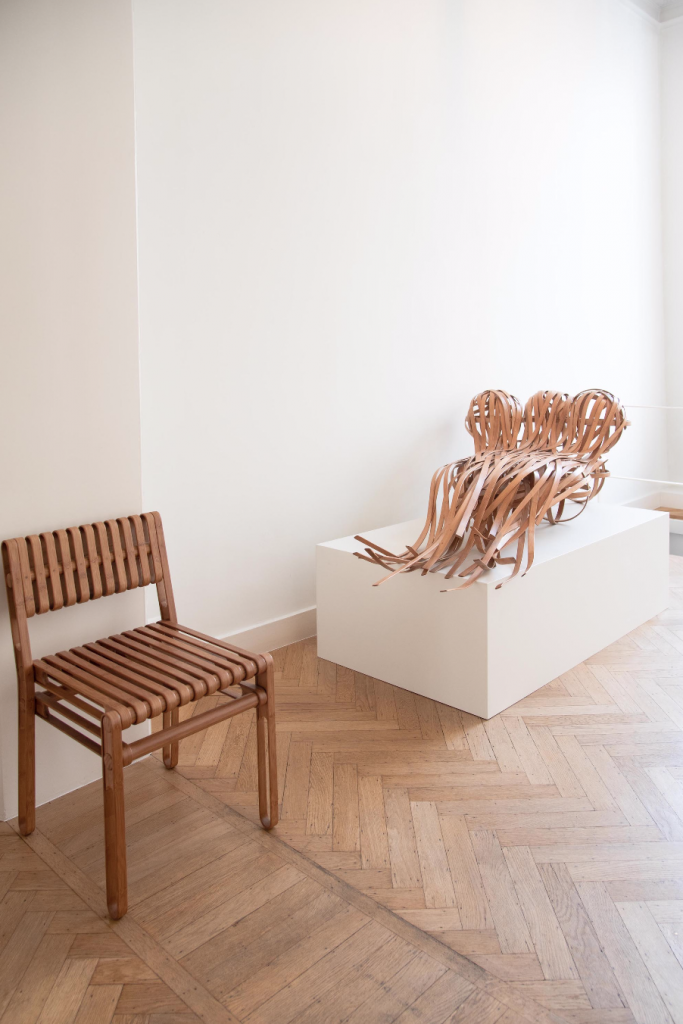 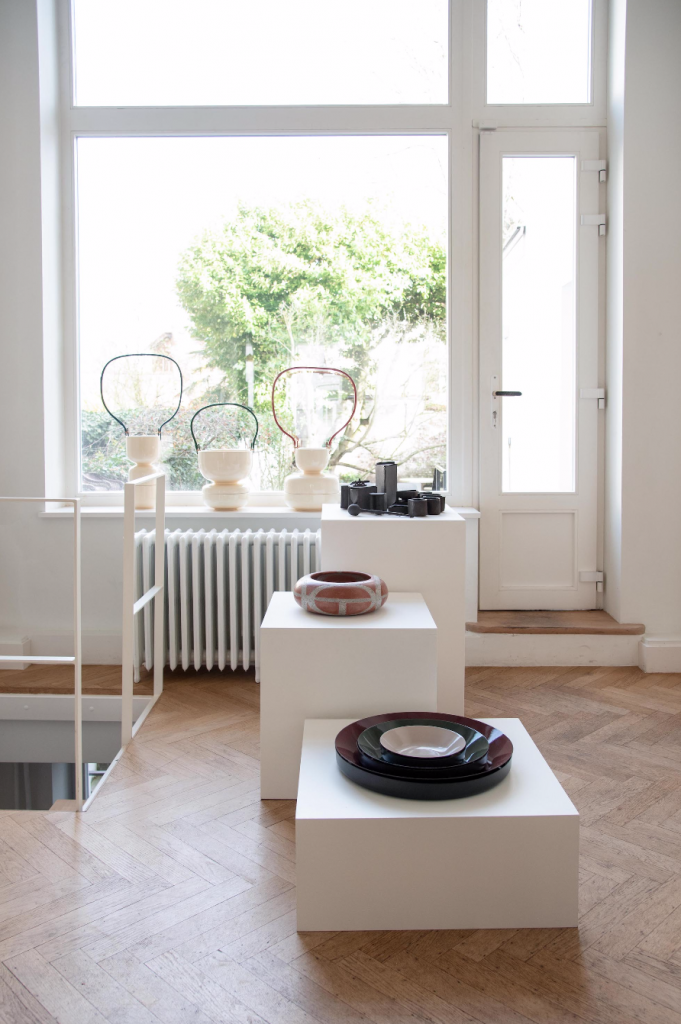 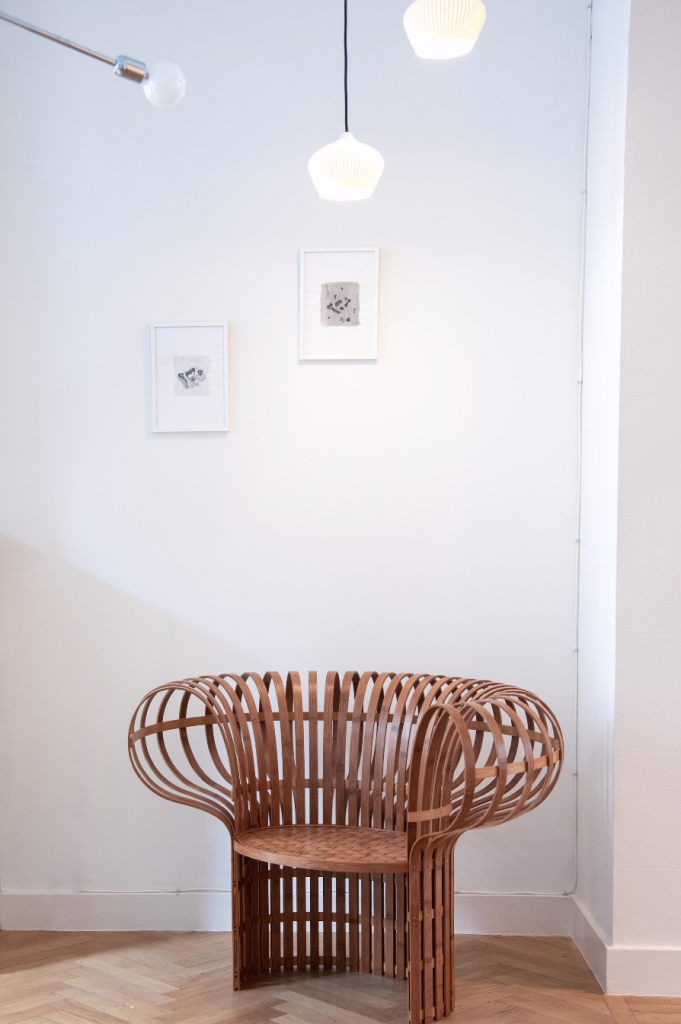 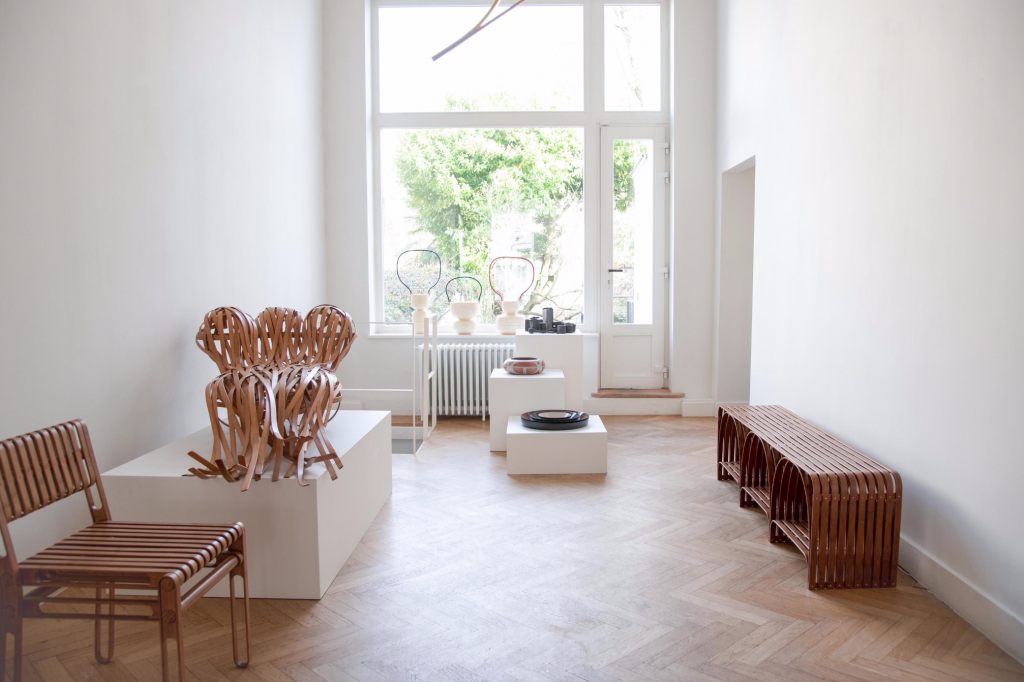