Glass Is Tomorrow
Real Life
Glass Is Tomorrow book looks to recap nine glass workshops, which bring together the worlds of design and glassmaking by drawing links between the individuals, territories and know-how. The workshops...
Scroll right to read more ›
Text by Christine Wilvers

Glass Is Tomorrow book looks to recap nine glass workshops, which bring together the worlds of design and glassmaking by drawing links between the individuals, territories and know-how. The workshops have been organized by the European project Glass Is Tomorrow between 2011 and 2015.

With over 400 pieces and potential prototypes for limited edition or mass production, the book exemplifies reflection, experimentation and co-creation through a selection of interviews, workshop moodboards, products, collaborations and companies such as Iittala, Nuutajärvi, Novy Bor and Ajeto, Meisenthal, Kosta Boda, Ecole Supérieure d’Art et Design de Saint-Etienne with Verrerie de Saint-Just and Royal College of Art with Vessel Gallery.

“The fascination for glass is nothing new,” says Lise Coirier, curator of the book. “This material, more than others, can still take our breath away – in terms of both visual and tactile perspectives – crossing cultures and époques, testifying to beauty, utility and pleasure.”

The book follows the Glass Is Tomorrow project, which has been co-funded by the European Union Culture Programme since 2011. The project aims to bring together knowledge of a particular place and its heritage, traditions and new sources of inspiration and innovation. The network promotes co-creative values as well as the so-called ‘European Glass Road’ by organizing collaborative workshops with designers, artists and glassblowers. The workshops presented in the book have been organized in Finland, Czech Republic, France, Sweden, Turkey and Great Britain.

“These workshops produce objects that fit in with the meaning of beauty, confronting the fragitility of age-old ceramics and glass-making industries as much as large factories which were often made into rootstock for a forever bygone ‘belle epoque’,” the curator states. “Using design to reinvent glass art was a challenge fueled by desires and ideals, that the European project, Glass Is Tomorrow, set for itself.”

“In fact, it is no longer the industry that necessarily drives innovation and design, but the people who draw from within themselves the strength to create and soak up the culture of the place during each workshop, which are held in regions that are historically entrenched in a glassmaking tradition.” • One of the highlights at trade fair, congress and event organizer Ambiente, in the coming year will be the launch of the special presentation Focus on Design, featuring outstanding products and detailed insights of current design highlights in a selected country. 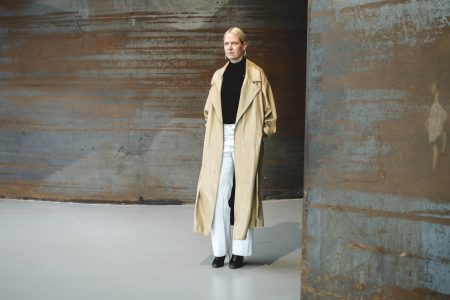 Sabine Marcelis: No Fear of Glass

Last month the Fundació Mies van der Rohe and Side Gallery presented No Fear of Glass, a site-specific intervention by the Rotterdam based designer Sabine Marcelis in the Barcelona Pavillion.