The life on, above and under water has long captivated Jana Winderen. Delving into the hidden depths to uncover the complexity and mystery of the invisible world beneath, reaching places and creatures that are hard to access, the Norwegian sound artist, 54, brings the audio topography and richness of oceans, rivers, lakes and glaciers to the surface. As fish, crustaceans, aquatic insects and mammals use sound to communicate, orient, hunt and meet across the globe’s oceans, she has recorded everything from seals, dolphins, humpback whales, shrimp, cod, perch, damselfish, bats and even coral reefs. Creating intensely moving experiences, her works may be viewed as a call to action in light of climate change and other urgent environmental issues that we may be less aware of since we can’t see them directly, as they are submerged in the seas.

TLmag: Tell me about your childhood and how your interest in ecology began.

Jana Winderen: Very early on, I was concerned about how we were treating our environment. I spent every summer by the sea and very often with my granddad, Lars Winderen, who was a doctor and an idealist in terms of protecting land and coastal areas. He had a love for plants and animals, so I learnt a lot from him and also from my mother. They were true environmentalists. Also, where I lived in the wintertime, we were close to a lake about to die from algae overgrowth. Later on, a government decision to build a hydroelectric dam where the Sámi people lived in Norway and where the reindeer fed really upset me. I even wrote an essay about a fish travelling around the planet looking for a mate, meeting other fish and complaining about oil spills. I wanted to study to become a marine biologist for all these reasons, to do research on the ocean, specifically on mammals like seals and whales, and then I started studying art because all along, I loved to draw, but the environment has been a core interest throughout my life.

TLmag: You had studied maths, chemistry and fish ecology, then fine arts. How did you realise you could use art to talk about the environment?

JW: At Goldsmiths University, I had started to work with sculpture and, in 1992, decided I couldn’t make objects anymore. I didn’t want to be part of this commercial buying and selling and storing objects that would later become landfill. I wanted to work with the immaterial material that sound is. Sound is quite a physical medium, but doesn’t actually take up any space, and I reuse my recording equipment and rent things locally. Hopefully I will leave less stuff on the planet when I leave. I’d rather people have an experience that they could carry with them and associate with instead of actually owning an object, something that doesn’t necessarily cost anything to come and experience. I think it’s very important that we pay more attention to notice the world and creatures around us and how sound affects them. All these sounds are stressing us on a subconscious level, and my message is that we are pouring all these sounds into the water as well without knowing. It’s unbelievable that we are allowing this to happen around us. But it’s also about the listening experience itself and our position as human beings. We have input from everywhere all the time. We are filtering reality. I think it is time to “put your finger in the earth”, like we say in Norway, which means to recalibrate or ground yourself, to get real.

TLmag: Take me through your creative process.

JW: I often think in terms of stories, layers, sections, travels, and up and down in the depths of the water. The first layer describes larger areas with lower frequency and greater scope, then another layer where I go a bit closer, and finally a third layer focusing on the details. I hope that audiences listening feel like they’re swimming or inside the water. I want them to listen to the situation, but I’m not trying to represent what’s out there. I’m trying to tell a story.

TLmag: Describe The Art of Listening: Under Water, the 22 audio-channel composition you produced with long-time collaborator Tony Myatt in partnership with Audemars Piguet for Art Basel Miami Beach in 2019, where you brought awareness to the ocean’s increasingly fragile ecosystem and the constant underwater presence of human activity through sounds recorded in the Miami harbour area, the Barents Sea and tropical oceans.

JW: I imagined the migration route of various species from cold regions where the ice is melting to warmer areas where flooding is happening, and what they come across along the way such as military sonar and seismic testing that makes it extremely problematic to meet or navigate. There are sounds of echo-locating orca, bottlenose dolphins, bearded seals, toadfish, tropical fish that I had recorded in Thailand and human activity originating from planes, ships and yachts. I always expect human-created sounds because they are really everywhere, even up in the North Pole! I included a lot of mangroves, seagrass and coral to talk about how it could have been in Miami. There are surprisingly very few fish sounds there, but it is possible to get them back because there is a village in Thailand, Chana, where they managed to get 144 species of fish back using techniques of building artificial reefs in a way that’s not harming the environment in the long term, after commercial fishing had emptied the bay 30 years ago. It gives me hope.

TLmag: Why did you choose the medium of sound?

JW: For me, communication is important. One reason to work with sound is that you reach a large audience. Sound travels. I’ve done many interviews on the BBC and for different radio stations. I have also worked for many years with the label Touch in London, which has been run by Mike Harding and Jon Wozencroft for more than 35 years. They have a worldwide distribution network, so I release my work on vinyls, CDs, cassettes, digital downloads and the radio. It’s essential for me to tell you a story with an environmental message because it’s a way of communicating what I think is important, and I do that through art.

Images courtesy of the artist and Audemars Piguet. 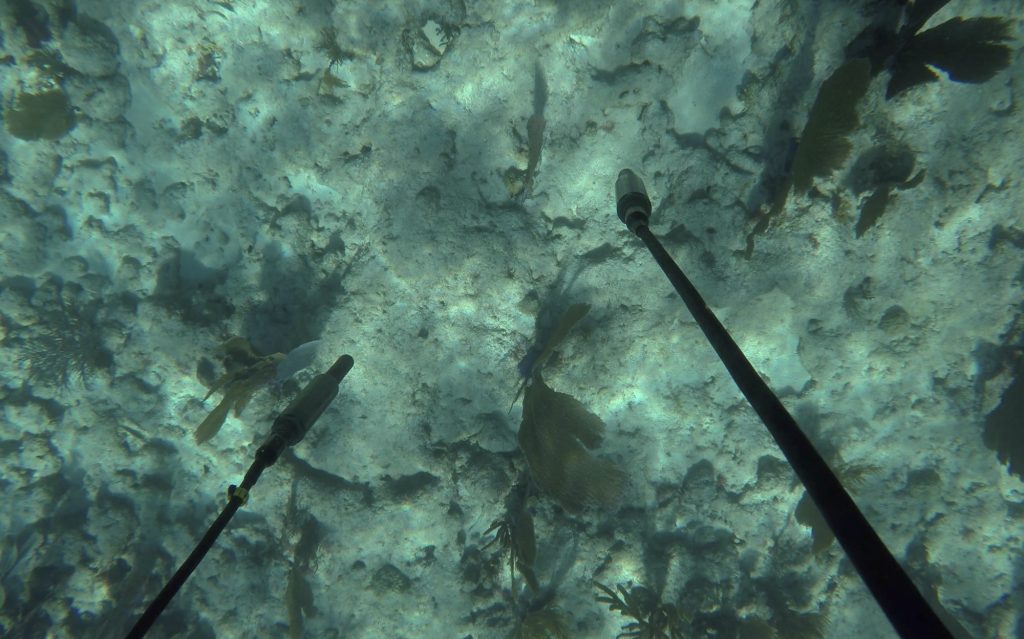 Recording "The Art of Listening: Under Water" in Miami, a sound composition commissioned by Audemars Piguet. 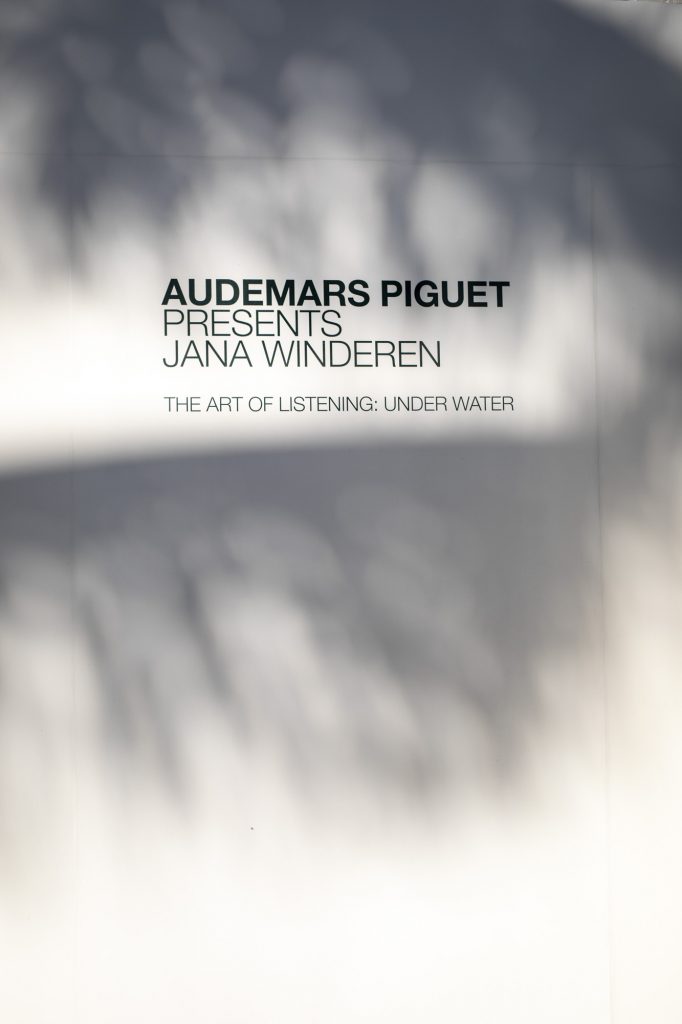 The entrance to The Art of Listening: Under Water sound installation at the Rotunda in Collins Park in Miami, courtesy of the artist and Audemars Piguet. 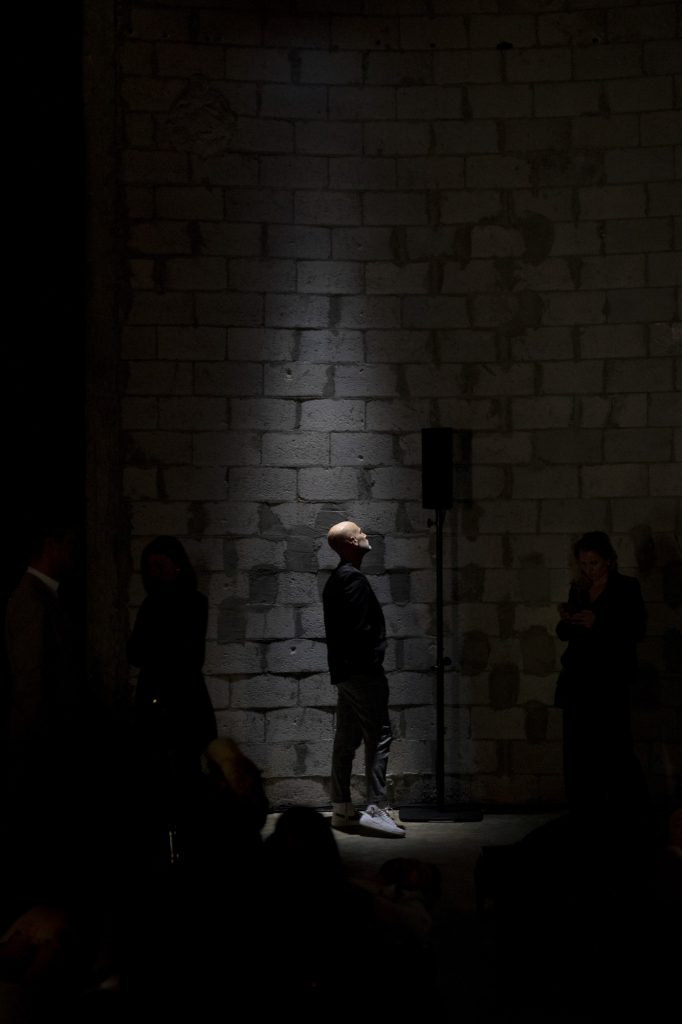 A visitor listens to the presentation of The Art of Listening: Under Water during Art Basel Miami Beach 2019, courtesy of the artist and Audemars Piguet. 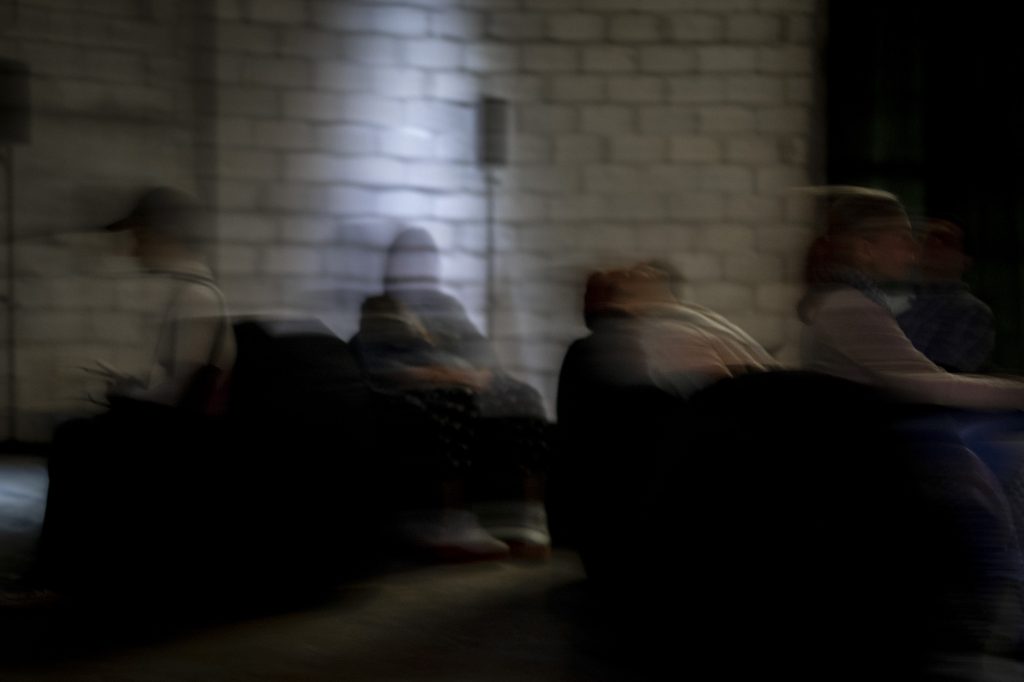 Visitors sit back to enjoy the sounds of The Art of Listening: Under Water. 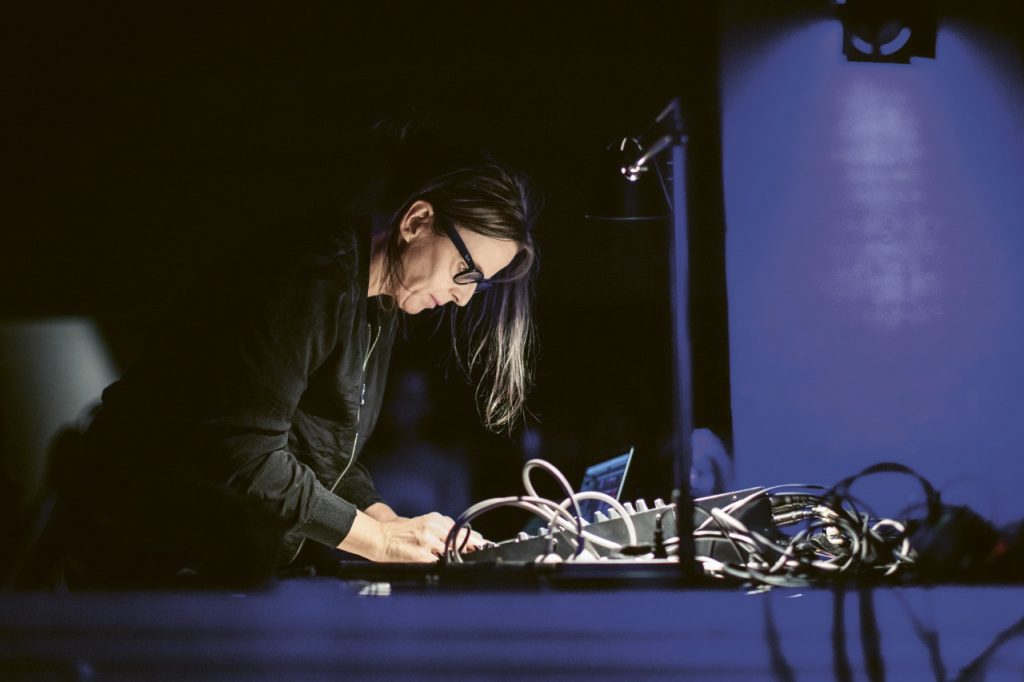 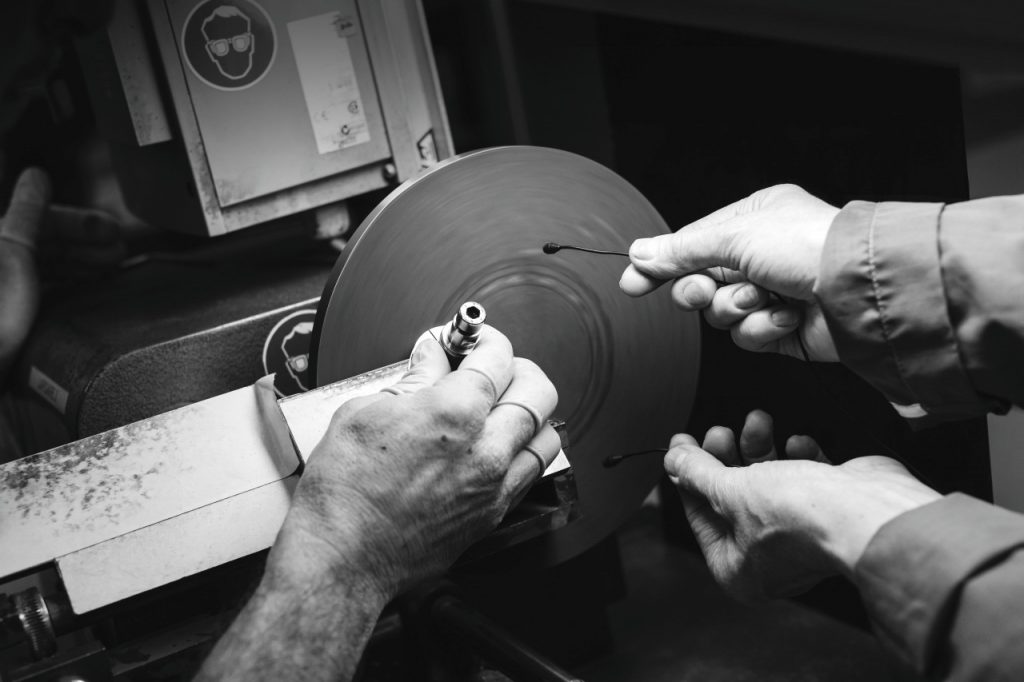 Jana Winderen records the sounds of craftsmen at work at the Audemars Piguet watch manufacture in the Vallée de Joux, Switzerland. 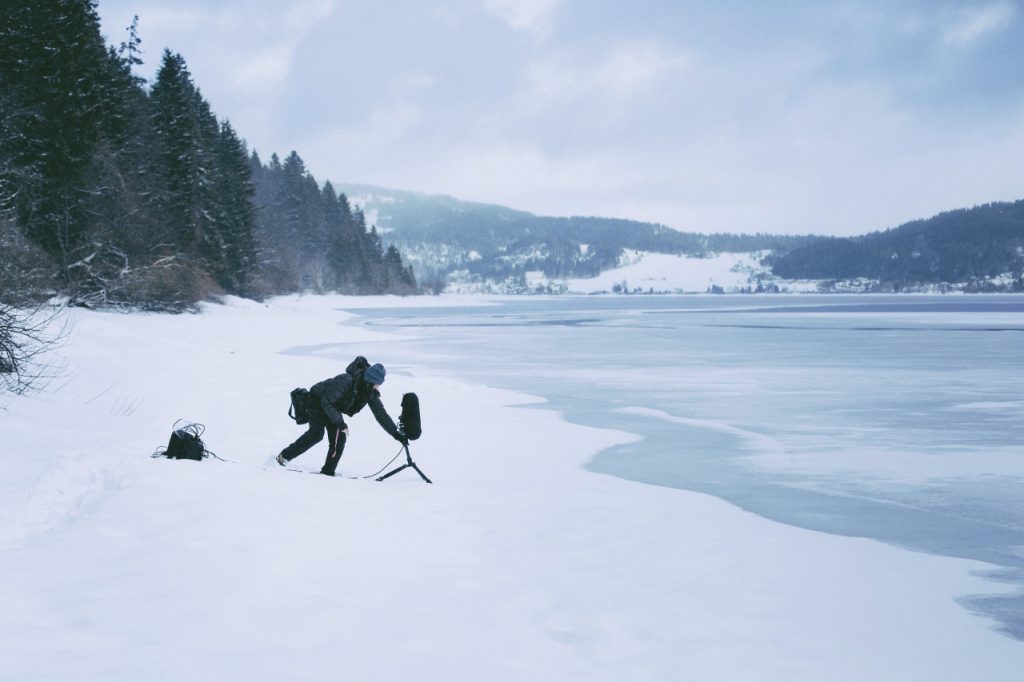 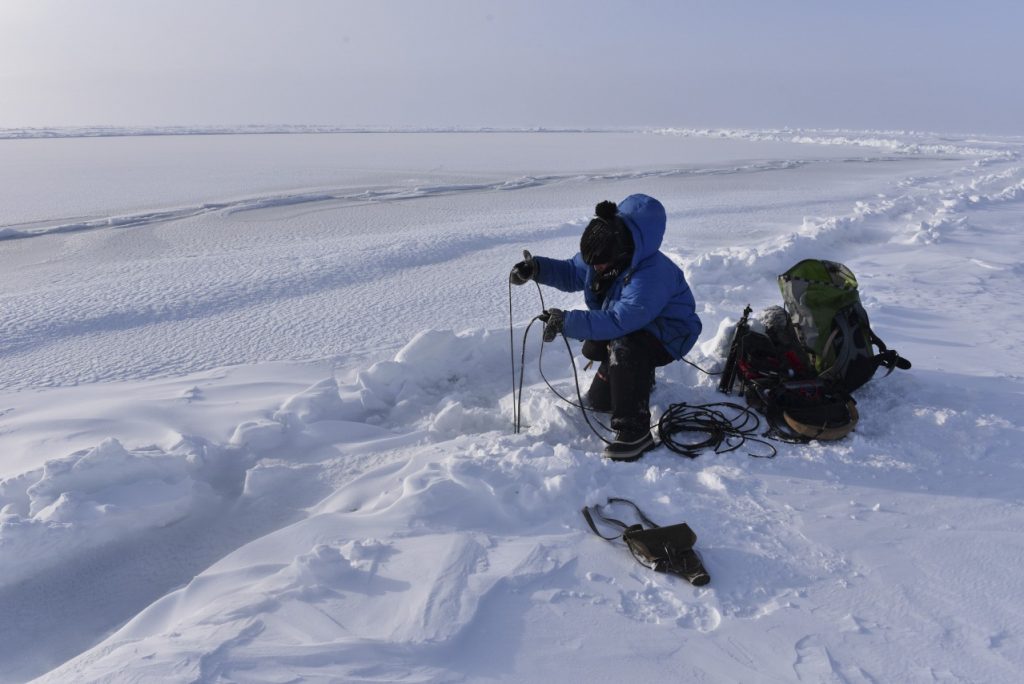 Recording with hydrophones 15 and 10 metres beneath the pack ice during a field trip to the North Pole and Camp Barneo, supported by the Mamont Foundation.
‹ Back