On the heels of her “Inner Bodies” solo show at Fondation Thalie in Brussels last spring, TLmag contributor Adrian Madlener spoke to Kiki Smith about her ever-evolving relationship to bronze and gold.

Kiki Smith has made ample use of bronze and gold throughout her illustrious career. In her figurative depictions of the body and nature, the renowned American artist has mastered age-old casting and mark-making techniques. These bespoke processes—developed over time with dedicated artisans—have allowed her to explore issues surrounding femininity, spirituality, mortality, mysticism, and historiography. Rather than propagate the common perception that gold and bronze are inert and grandiose, Smith views these materials as malleable and ephemeral, extracted stardust that isn’t all that different from human skin. Smith is a true autodidact who has learned and adapted numerous traditional crafts through experimentation. Unlike many of her contemporaries, the artist isn’t afraid to get her hands dirty and collaborate with fabricators. All of this is evident in seminal works like Sungrazer VI (2019), Reclining Nude (2005), and Virgin Mary (1993).

TLmag: Talk about how you first engaged with bronze.

Kiki Smith: Somewhere around my early thirties, I came across a small foundry and was given the opportunity to make bronze boxes. I had been working with wax and paper before, but this material seemed sturdier and more sustainable. Not a lot of artists were working with it at the time.

I was initially interested in creating works that would last a long time but quickly I discovered that most historical statues produced in bronze and other metals no longer existed. Throughout various periods, they were melted down to manufacture weapons. The pieces that have actually withstood the test of time were those produced using far less valuable materials like ceramics, which were discarded and buried rather than reused. I found this fascinating and began using bronze as a malleable rather than impassive material. And yet, I still use it for its durability. There’s an interesting contrast between these two qualities.

Most people who work with the metal, especially those in Europe, tend to spend a lot of time perfecting moulds, only to pour in the liquid metal, achieve a predetermined form, and call it a day. I find this approach boring. I’m more chaotic in my process. I enjoy pulling apart cast elements, putting them back together in new compositions – which can be costly – but perhaps most importantly, I enjoy applying different types of marks or surface treatments to the shapes, a practice that’s more common in African and Asian cultures. Etching is an essential part of my practice, so I’m particularly drawn to age-old chased metal and embellishment practices.

TLmag: How did you start working with gold?

K.S.: I initially began using gold when making a sculpture of the Virgin Mary in 1992. I wanted to express her veins in a striking way and drew inspiration from ancient Middle Eastern inlay techniques. While with bronze production, there’s often a lot of hanging around and waiting for things to be done, gold is much easier to manipulate. You can just hammer it yourself and get quick results. To keep myself busy during long days at the foundry, I started buying gold in bulk from a supplier in New Mexico and creating various bracelets and pendants as presents for friends and family.

While bronze is a mixture of things, gold is an essential element that derives from the collision of stars that coagulated in our earth 13 billion years ago. There’s something holy about this origin story. The idea that you can be in direct contact with something that is from the beginning of time is especially intriguing.

TLmag: A lot of your recent work deals with humanity’s connection to nature. How does the complexity of working with such finite material come into play in your ideation?

K.S.: So much of the gold we have today has been repurposed time and time again. Even within the history of jewellery, there’s a rich tradition of melting old adornments and creating new ones. Very little gold is still directly extracted from the earth. We all know that the environmental ramifications of mining are tremendous. There is something very satisfying and transformative about reusing old gold, mashing and combining it with other elements. Hammering it over a brick, the material gets scratched up and dull. It absorbs some of the stone particles. But then, as you wear it, it becomes polished. Over time, it rubs off into your skin and essentially returns to the earth. It might seem like they’re impenetrable but bronze and gold are porous, much like everything else in nature; our ever-evolving cultures and value systems.

TLmag: How does working with these materials allow you to render the exacting qualities and idiosyncrasies of skin and other surfaces?

K.S.: Unlike paper, which is more translucent, metal is opaque but lends itself to light reflection in a manner that closely mimics human skin. It very easily takes on the attributes we associate with the body and it can seem soft when it isn’t. I’m fascinated by how gold has been used to hold and transport wealth between different generations of women. There’s something metaphysical about how gold or bronze jewellery is worn. Ornate pendants and amulets carry a lot of historical significance but also have chemical qualities that are activated when directly connected to the skin. The forms aren’t passive, especially when combined with precious stones that also carry certain powers. People have steel implants in their bodies. Babies start wearing gold earrings right after being born. We associated these metals with protection, strength, and a kind of grounding. Working with these materials has allowed me to weigh myself to the earth.

This interview originally appeared in TLmag37: State of Gold 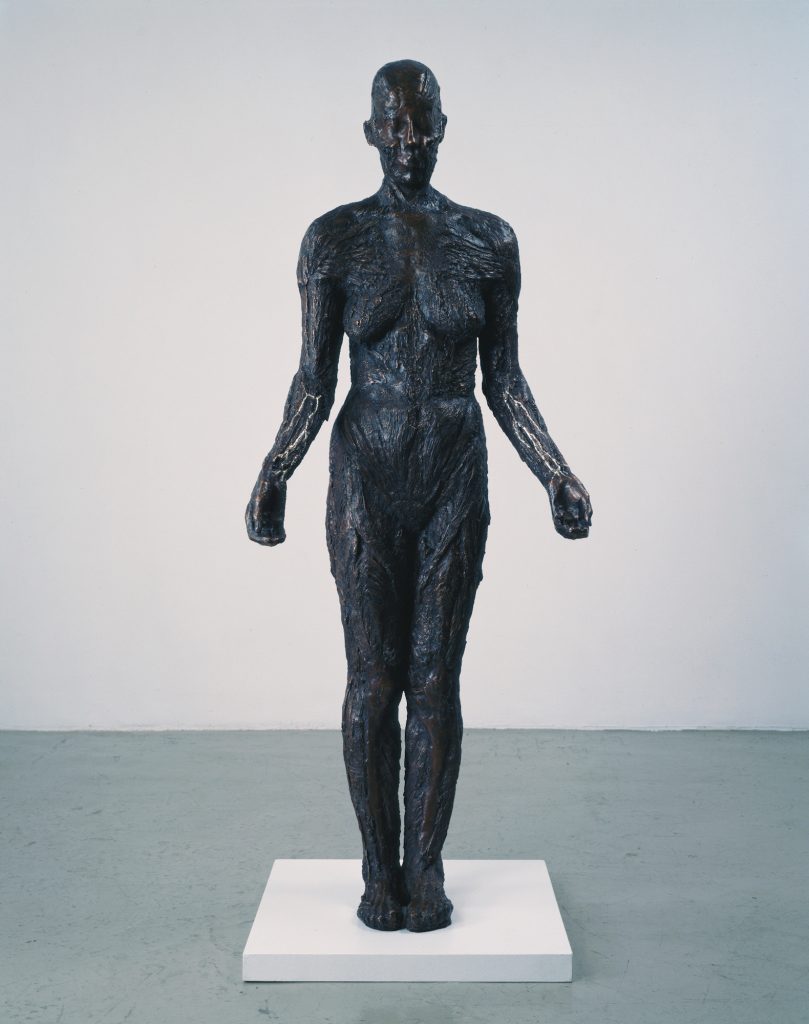 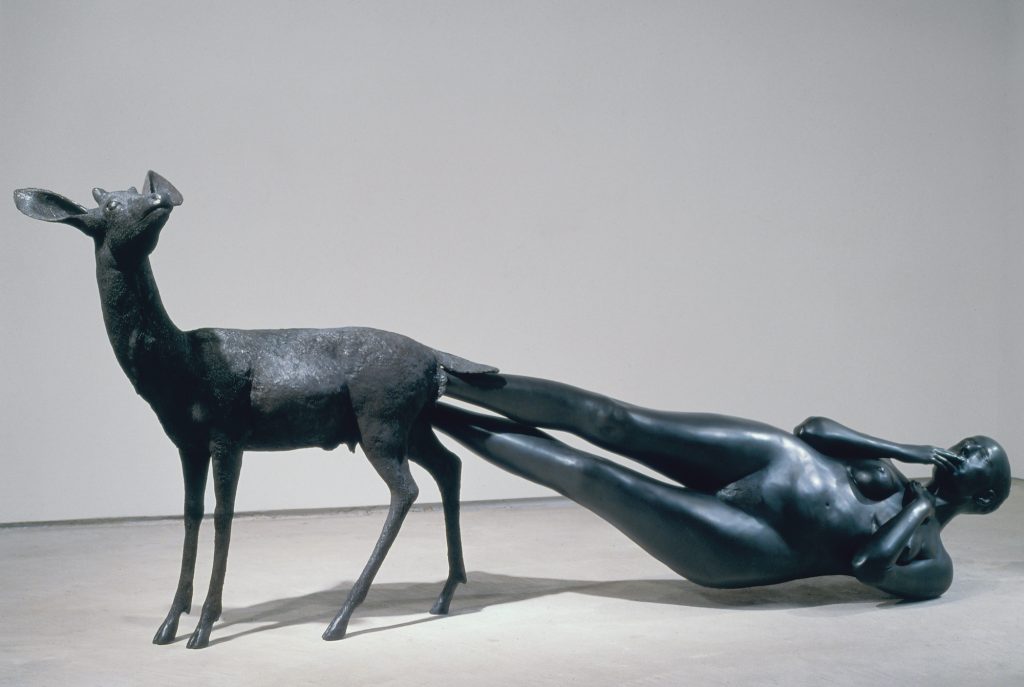 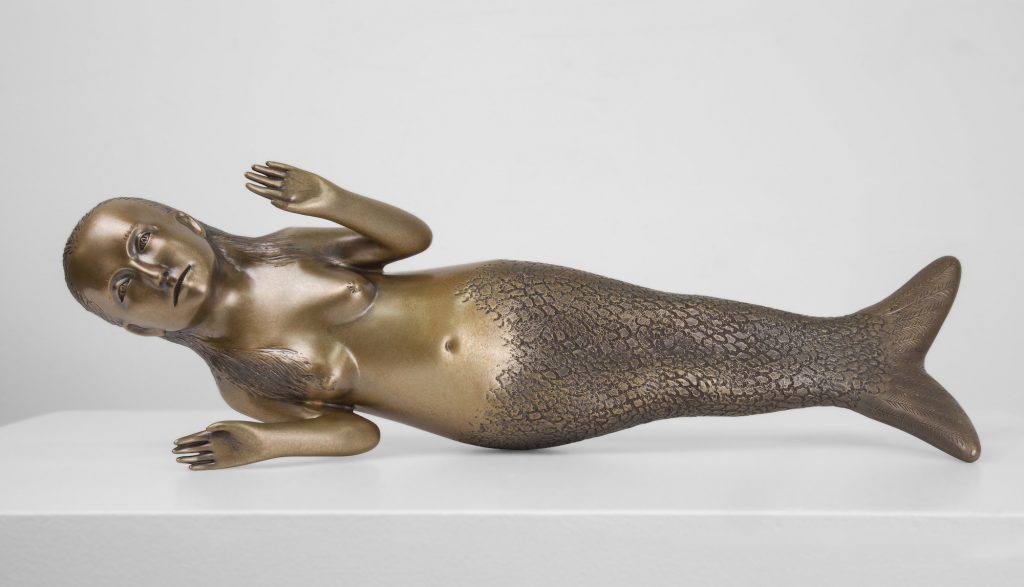 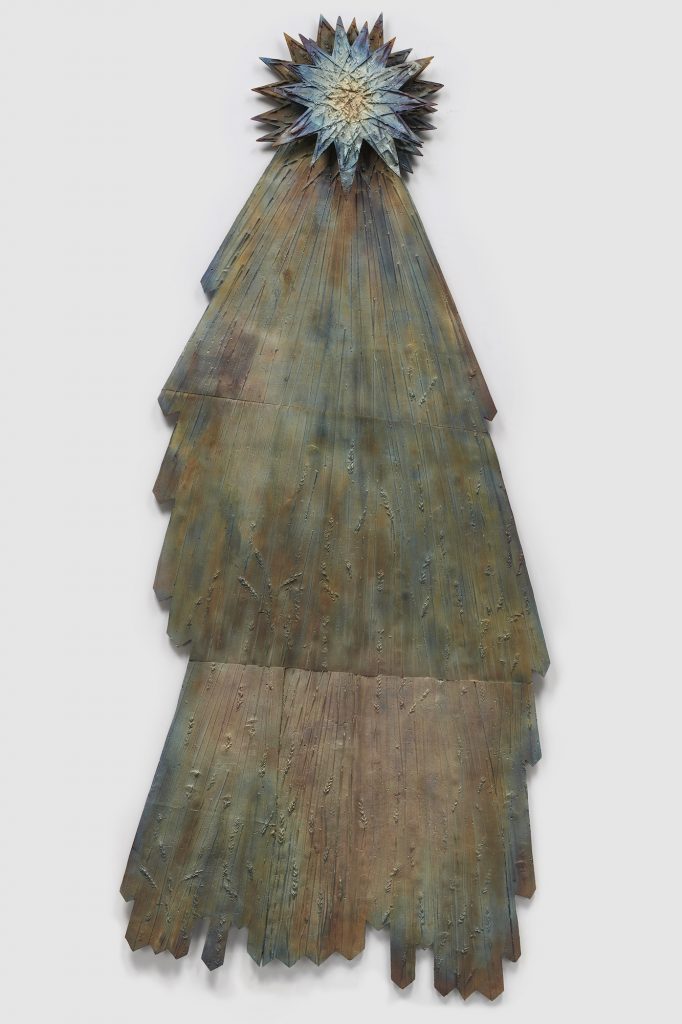 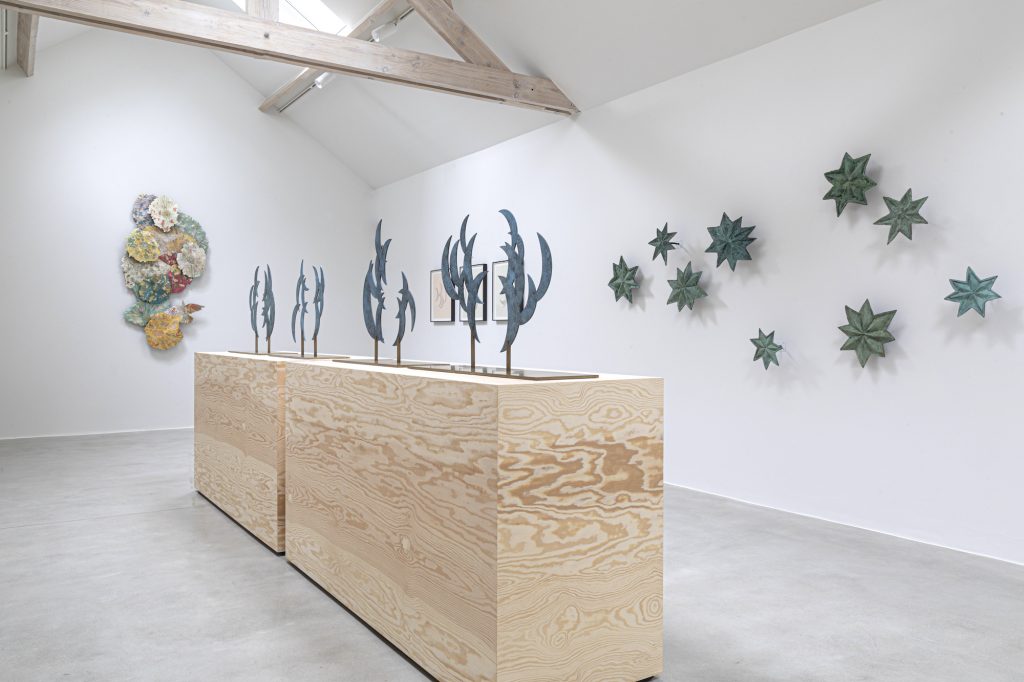 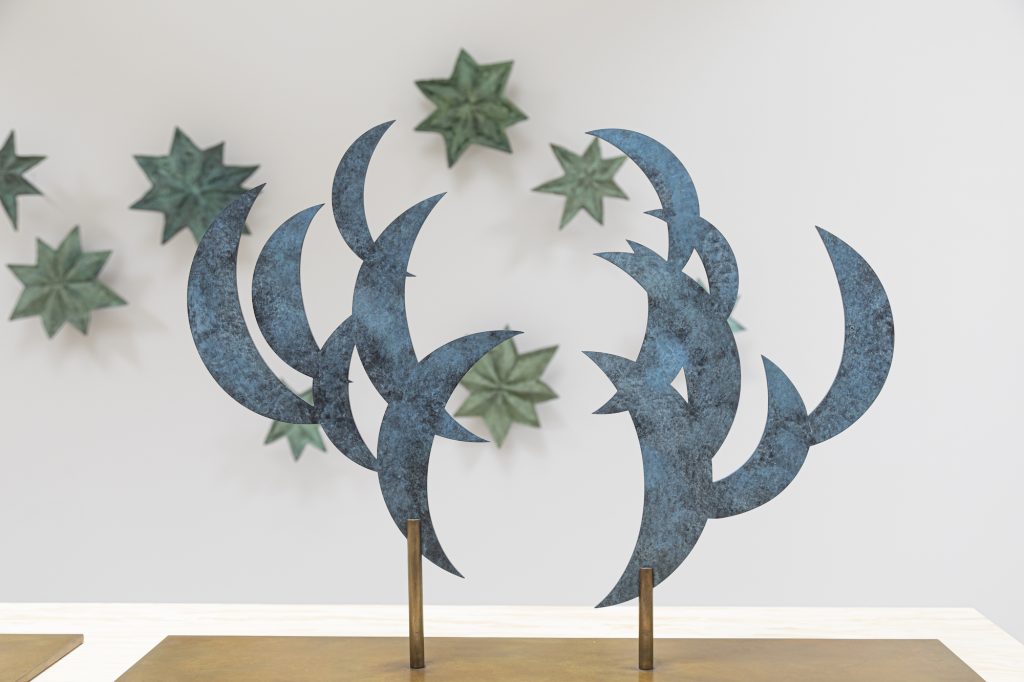 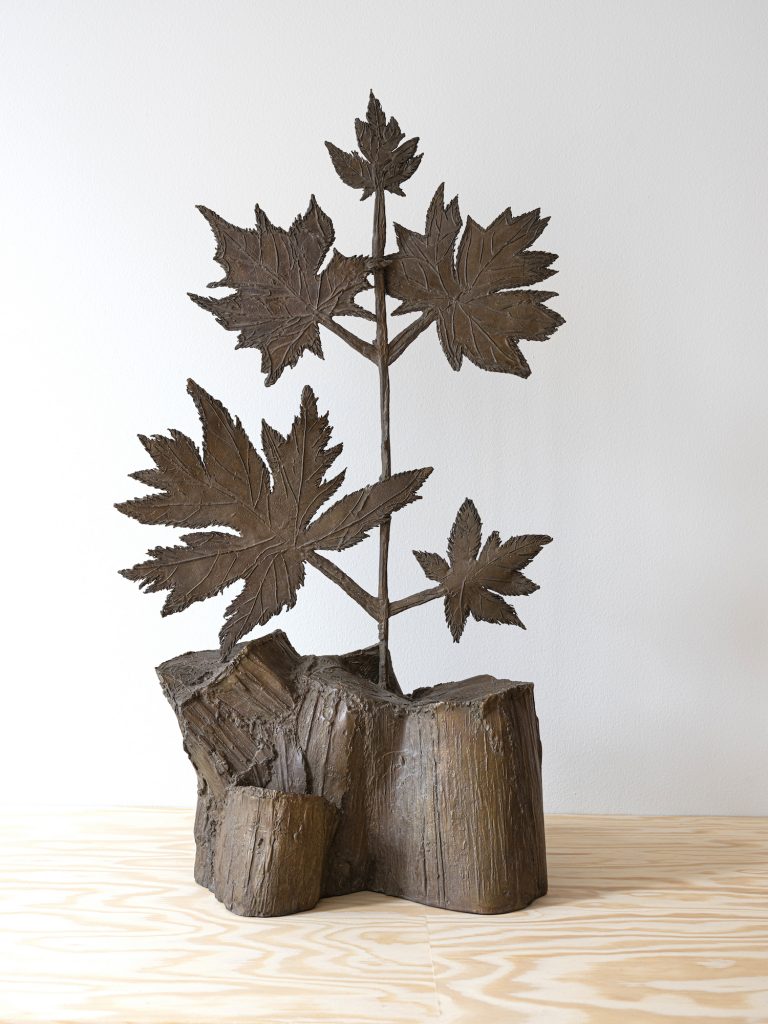 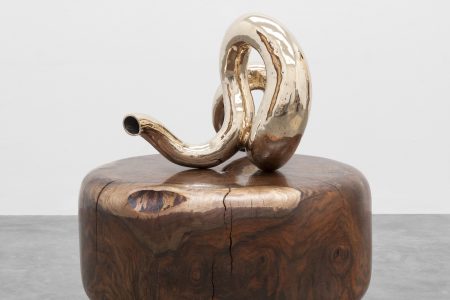 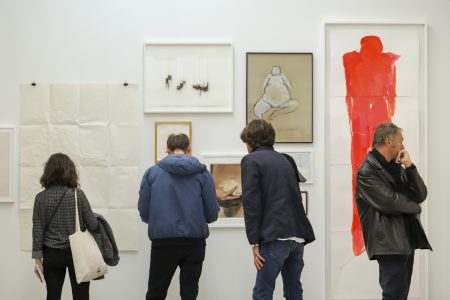