Lasvit: Of Monsters and Glass Men

The Czech glassmaker took a bold step with their Milan Design Week showcase: their Monster Cabaret delved into politics, sex and the rationale of fears

In 2017, the “small Scala” of Milan reopened its doors, after hiding in plain sight for more than 30 years. The Gerolamo Theatre surely deserves its nickname: this Polly Pocket of a venue holds barely 209 seats, but that only helps highlight the sheer density of its beauty. Its size is rather appropriate for its purpose: built in 1868, it was known for its marionette shows —objects small in size but capable of revealing large truths.

So it was a fitting location for Lasvit’s Monster Cabaret exhibition, held during this year’s Milan Design Week: through the transparency of glass, the Czech company explored that murkiest of feelings —fear.

Colour us entertained: most of the 17 designers recruited by the company delivered, with a range of small objects that meant to explore matters like the fear of one’s own sexuality —that’s Fabio Novembre and his sex-toy roulette— to the fear of being unable to escape from under the shadow of politics —an reddish-orange-tinted Lenin with a disproportionately long left hand (har har) stood in front of a tower of screens covered with glass diaphanous enough to let through the silhouette of a certain reddish-orange-tinted American politician.

Lasvit is better known for its application of programming to the legendary craftsmanship of Bohemian glass —and indeed, the range of expertise on display was so diverse that one could be tricked into thinking the pieces were made by different companies. Following a successful exploration of religious rituals with Khalid Shafar’s Silent Call, the glassmaker has now turned to humour, but also ventured to give voice to introspection and anxiety in what is arguably, the Gerolamo’s actual size notwithstanding, the largest of stages in the design world.

The exhibition, which also featured Prague burlesque performers interacting with the Monsters onstage, was recently announced as the grand winner of the Milano Design Award. 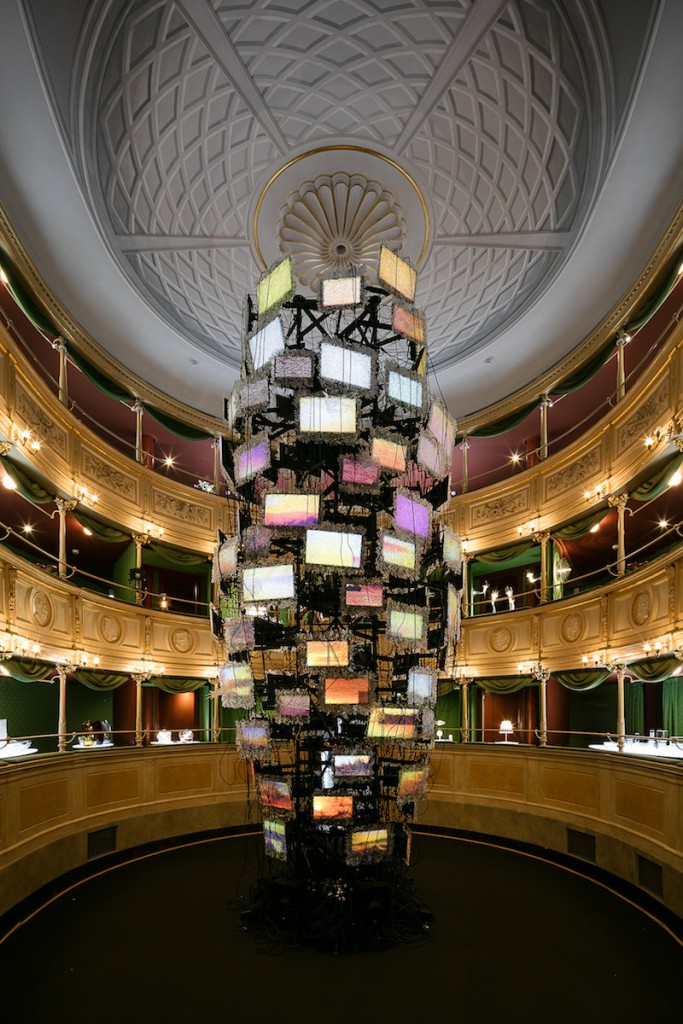 MAXIM VELCOVSKY
"In the old days, there used to be pillars on the corners of the
streets where you could learn what recently happened and what is going to happen," said Lasvit's art director of his centrepiece, The Independant. "This is a billboard of its time, its crystal screens delivering the crystal-clear truth. What you are going to believe is up to you." 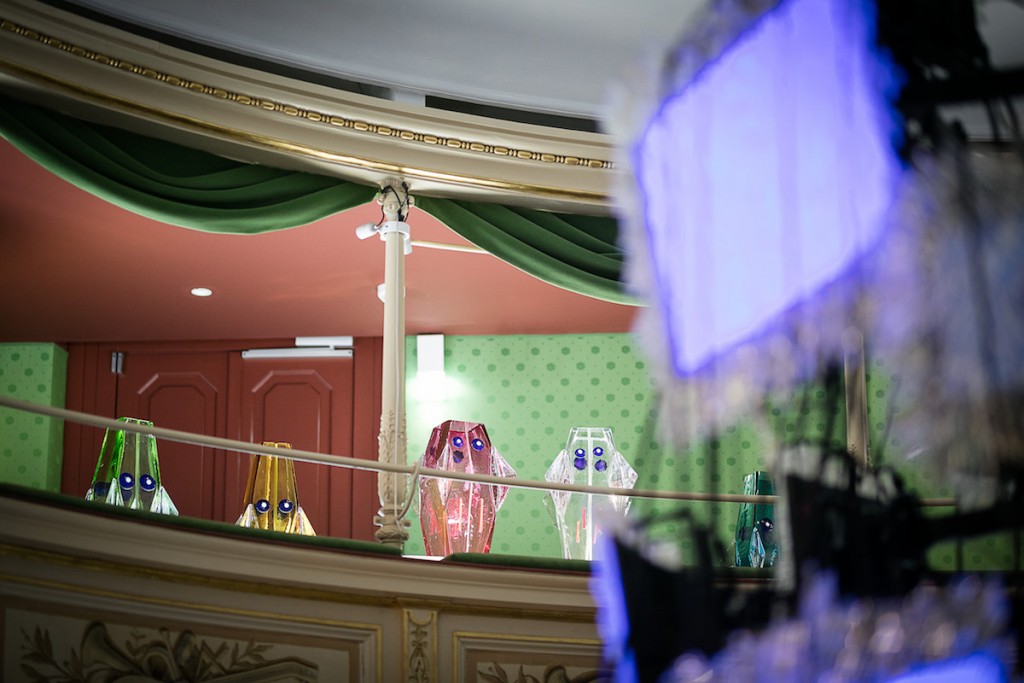 ALESSANDRO MENDINI
“It is as if you looked at the world through two different eyeglasses," said the designer about his Rombo. "Using one pair, I see all my objects as normal. Using the other, I see them as monsters." 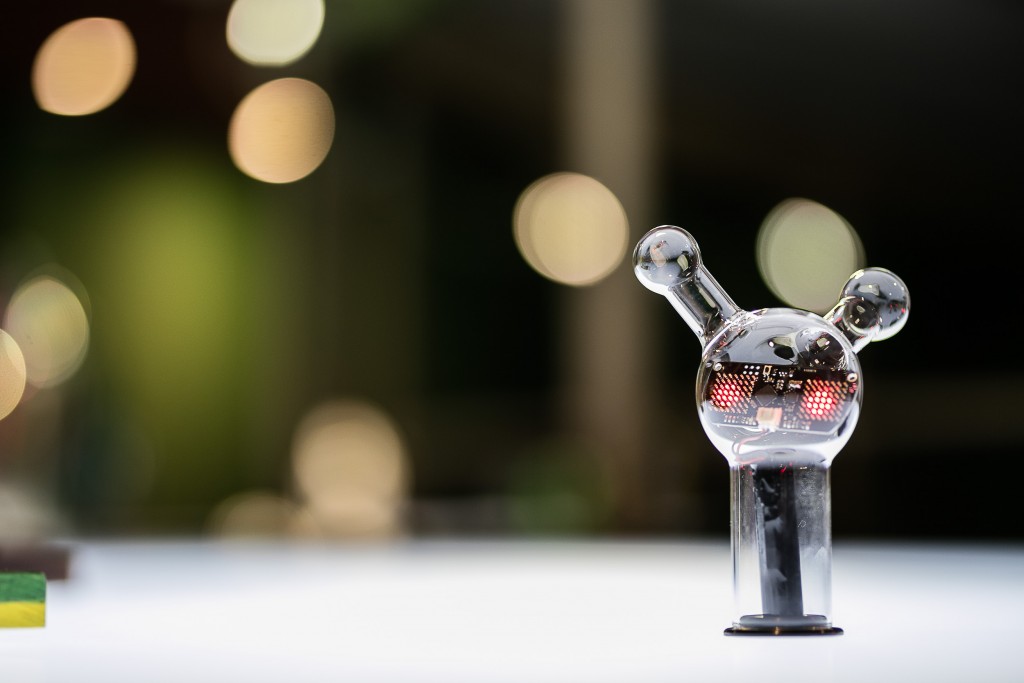 MORITZ WALDEMEYER
Although the physical glass form of the Mori Monsters is simple and minimalist, almost cute, their eyes are illuminated by the evil spirit inside them. Each eye consists of a matrix of LEDs allowing for simple animations that bring the monster to life. 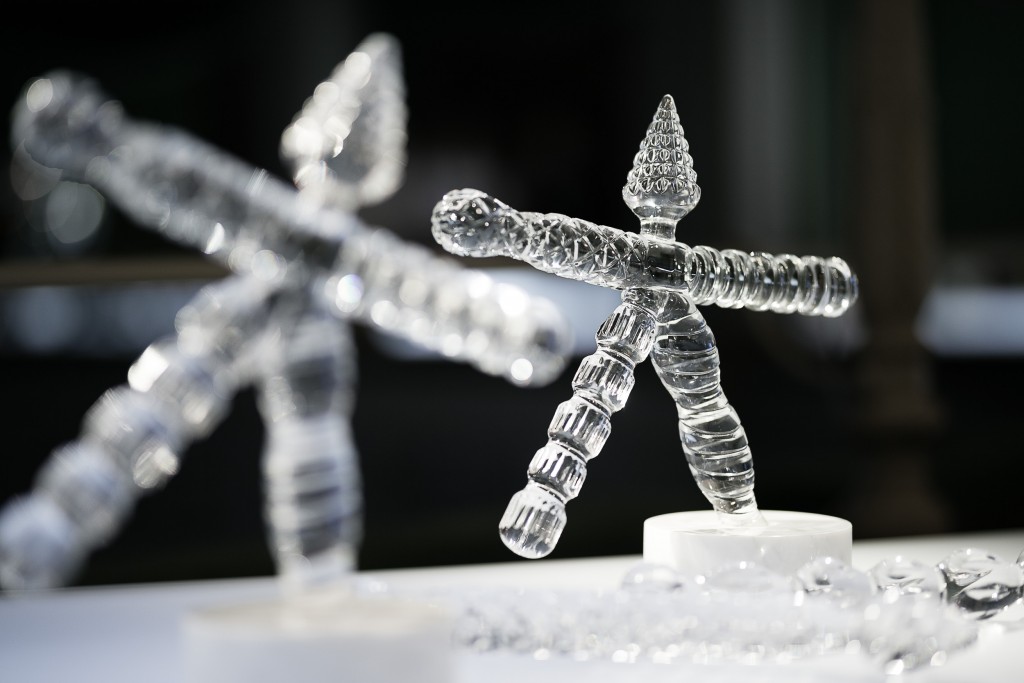 FABIO NOVEMBRE
Novembre's Toyboy is a beautiful monster, approachable and kind. “A new friend with monstrous proportions, a toy boy to soothe the solitudes of the soul,” says the designer. 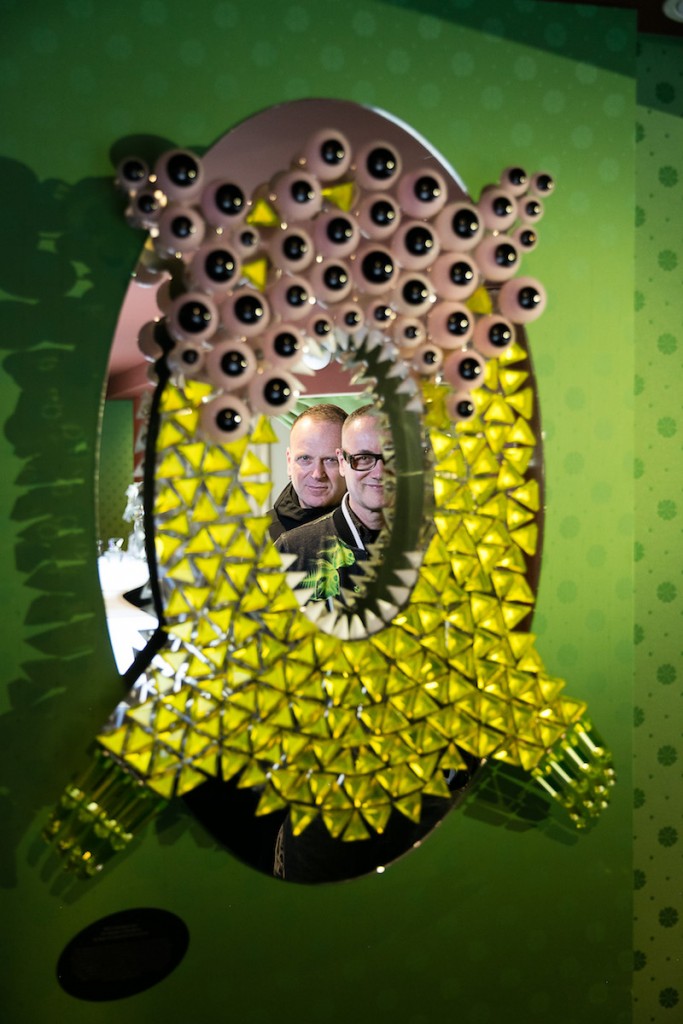 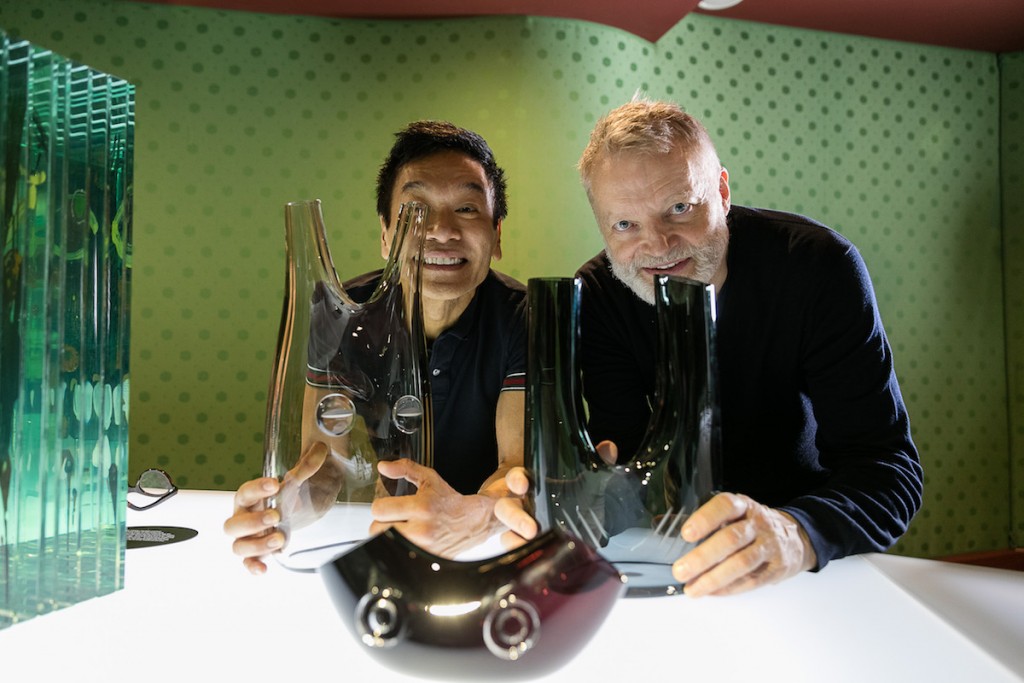 YABU PUSHELBERG
The creative duo researched and then found objects described in Japanese folklore – the so-called Tsukumogami. The folklore says that if an object serves you 100 years, it will acquire a soul. Material culture becomes infused with soul. This is how Shiin, Uro-Uro and Jiro-Jiro were born. 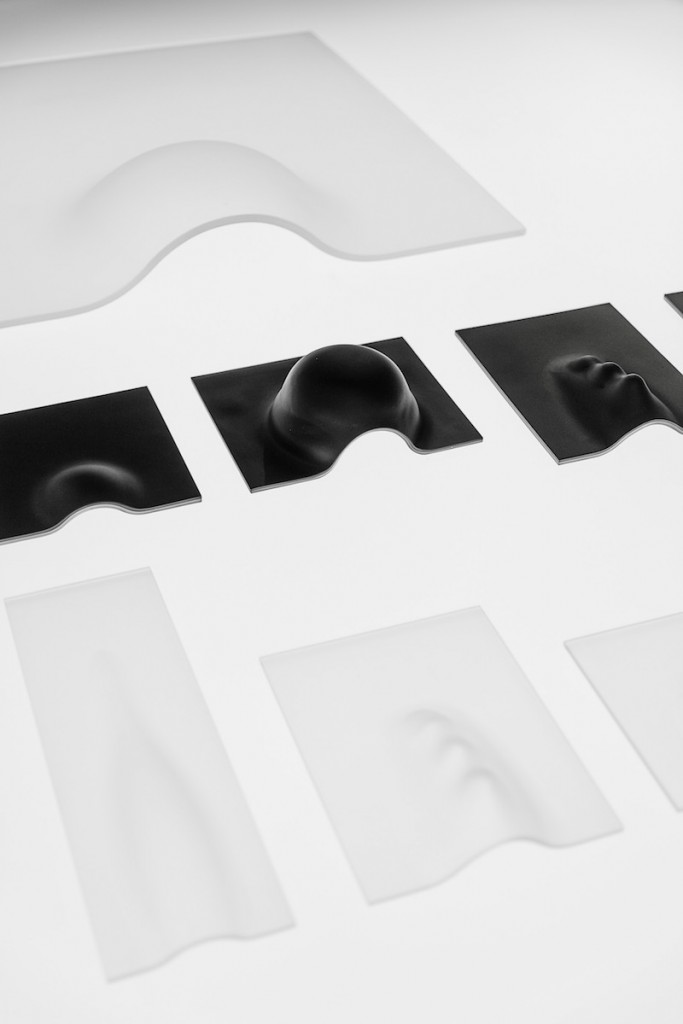 NENDO
“By playing with the idea of the unknown, the invisible and the elusive, we created a monster,” explained Nendo's Oki Sato. There are four types of them: four different “somethings” under the glass sheet --something small, something long, something jagged and something big. 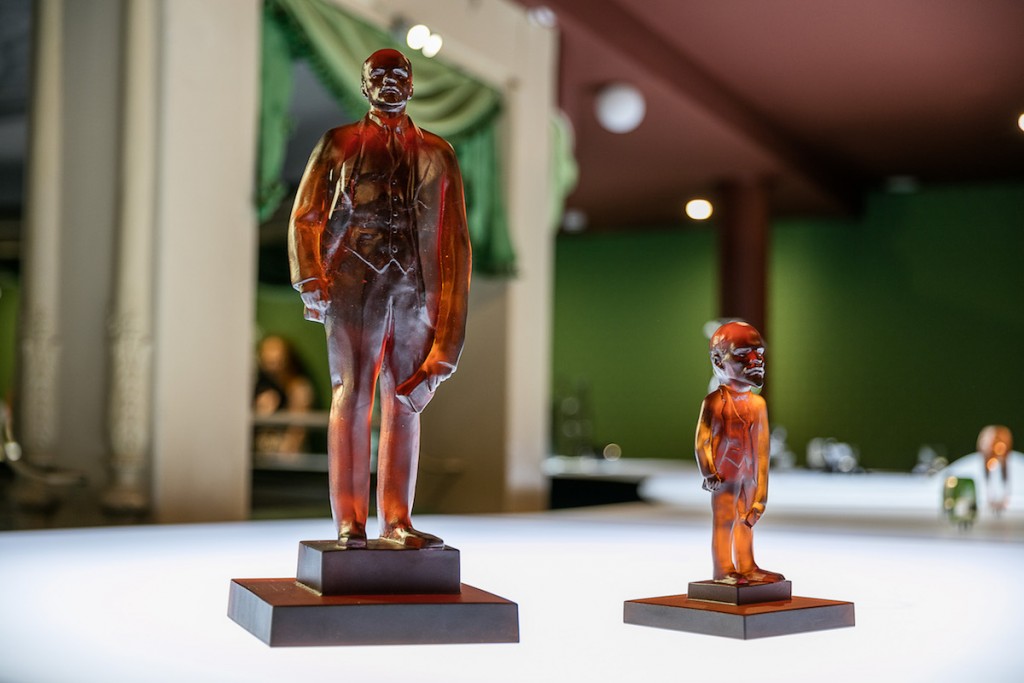 MAXIM VELCOVSKY
At first glance, his glass Lenin is a decent portrait of a person --it looks like the same Lenin we used to know from portraits and statues--, but when you look closer, something isn't quite right. “Both his left limbs are bigger; my Lenin suffers from malignant forms of leftism,“ explained Velčovský. 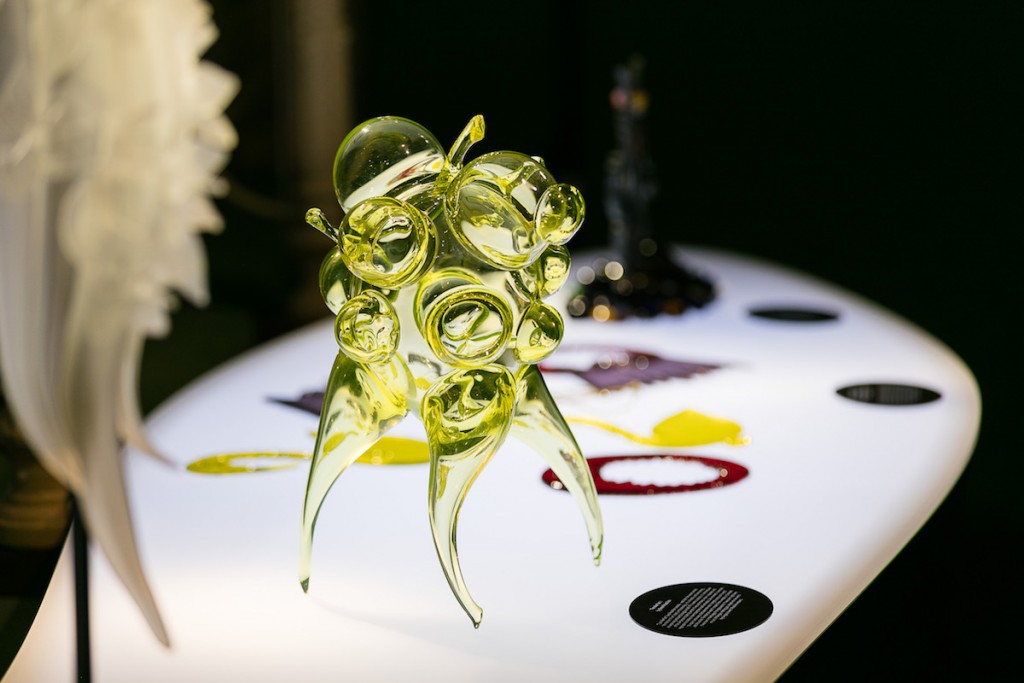 RENÉ ROUBICEK
The Martian, made of uranium glass, wasn’t created from a render or 3D model: it was born in the forge of the glassworks. “It was born right there in front of the glass melting pot, helped into the world by the glassblower,” Roubíček explained. 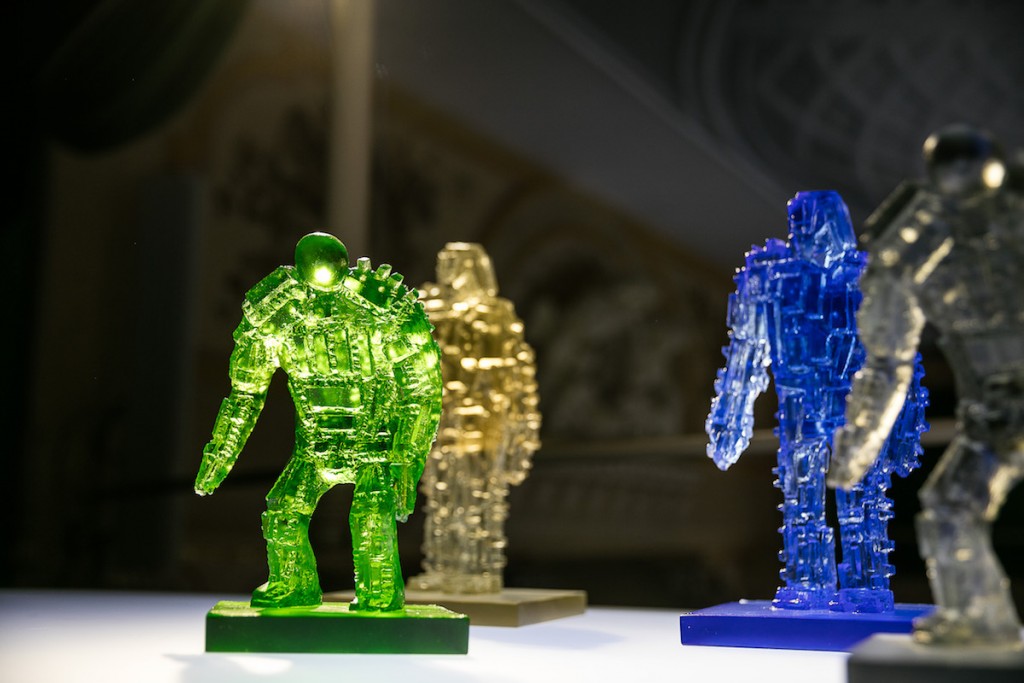 THE CAMPANA BROTHERS
Flix and Flex, the monsters from outer space created by designers Fernando and Humberto Campana, are crooked and curved. They are like aliens with a human shape, but they originally came down from space and their surface is their skin. The creatures are not ugly or terrifying --we see more frightening things in daily life. The Outer Space Monsters might be everywhere. 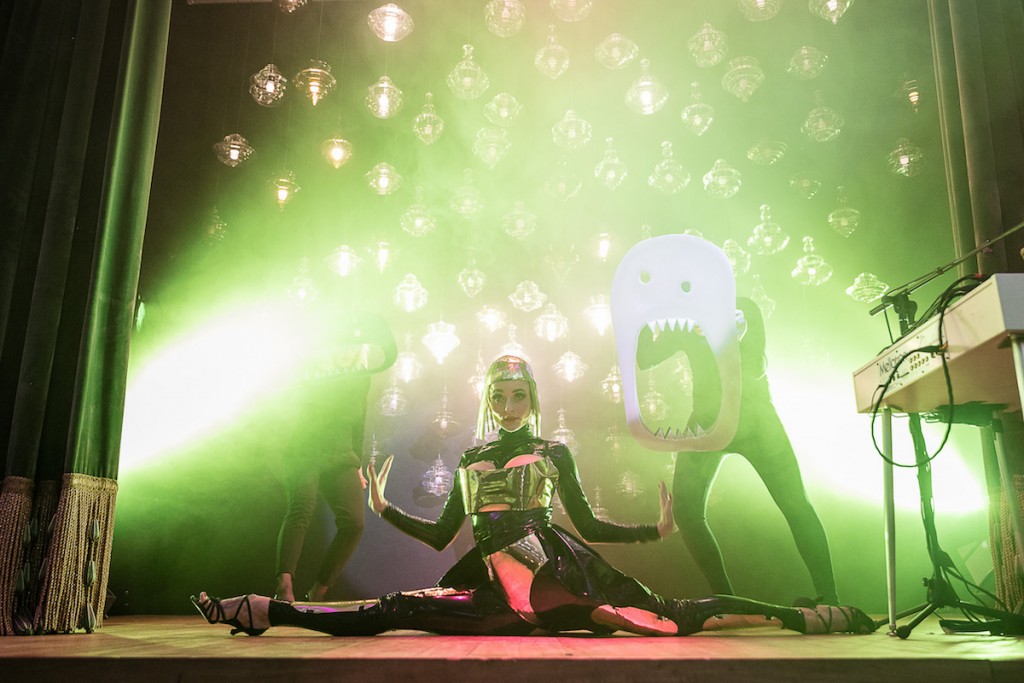 ON STAGE
Part of the troupe of burlesque dancers performs onstage with a large version of Maarten Baas' BHSD. The originals, none bigger than 20 centimetres, are "as naïve as can be," as described by their creator.
‹ Back