From firing their first kiln in 1892, Swiss company Laufen now produces three million ceramic items per year. Nevertheless, to celebrate its 125th anniversary, the bathroom solutions brand is focusing on 17 very special pieces: the sculptures that comprise the Milestones show, created in collaboration with designers such as Patricia Urquiola, Toan Nguyen and Konstantin Grcic.

The sculpture set has been on tour throughout Europe and now makes a stop at the London Design Festival as A Curated Art Show. What?, a dedicated exhibition at the Design Museum. We spoke with Laufen’s director of marketing, Marc Viardot, about how craft, irony and science came together in these objects, and how this artistic experience is already having an impact on the company’s primary production process.

TLmag: First things first: What does the “What?” in the show’s title stand for?
Marc Viardot: The title “A Curated Art Show” is the mere description of what we put together, and the “What?” opens a dialogue. We have so many ideas on this table to discuss, and we have already had so many interesting discussions with the creative community when presenting this exhibition in Frankfurt, Milan, Copenhagen, Basel and now London. To engage in the dialogue with creative minds is a very important source of inspiration —particularly since the “What” plays with the boldness of openly questioning ourselves.

TLmag: And what made you think of sculpture as a medium to showcase the brand’s history?
MV: The attraction to architecture and art comes natural to a leading ceramic manufacturer, and we couldn’t think of a better way to celebrate than exploring the future while reflecting.

Together with Beda Achermann we developed the idea of an exhibition of 17 white in white objects, about 50-80 cm tall. We were passionate about the idea of making an exhibition the core of the 125th anniversary activities.

The target was to translate the essence of Laufen: not its history but its reference points, beliefs, aspirations, values and milestones in an artistic way and to technically realise them in a wide range from abstract to figurative, from handmade to digital fabrication in our materials from Vitreous China, Fine Fireclay SaphirKeramik, Coated Sand, LCC, varia Resin and Plaster.
We made this even more challenging by working with multiple technologies, such as digital fabrication.

There is much theory in all of this and many visionary aspects we wanted to explore, but still had a strict timeline to come forward with an exhibition at a certain date. An exhibition in the end is a physical exercise.

TLmag: There is a wide range of proposals in the exhibition, from the robotic by Bastien Aubry and Dimitri Broquard to the minimalist by Alfredo Häberli and the somehow more literal, by Konstantin Grcic. How much direction and leeway did the contributors have?
MV: To describe the substance of what Laufen was, is and will be about, we worked on filtering 17 core subjects —milestones, reference points or values. The next step was to discuss and decide which designers to select for a specific subject and invite them to collaborate in our birthday exhibition. They received a clear briefing for a subject proposal and some visualised initial ideas for the object design.

TLmag: The brand has spoken about how innovation has been as important in its success as creative energy, and some of the pieces do combine technical proficiency with a touch of humour, of childish wonder. How did the project work with those parallels?
MV: The aim was to have a landscape of differently executed topics at the end, formally autonomous, but also forming a strong statement to the fascinating material that is ceramic.

There is the clear target of innovating processes in terms of technical proficiency. We still have a strong commitment to the handmade aspect in terms of skills and creativity throughout the development and production process. We perceive the hands-on part of our identity as fundamental for our ingenuity. That’s why we devoted one of the sculptures to the topic of the handmade. As a reference to the Swiss artists Fischli/Weiss, FLAG’s Bastien Aubry and Dimitri Broquard’s produced a “handmade” object made from clay, modelled by hand and air dried.

Being a leading ceramic manufacturer is all about making the processes totally stable to guarantee identical immaculate pieces. To then present a non replicable clay item, which has not been processed at all, also adds a layer of self-irony.

TLmag: There’s irony and, at the same time, there’s science. How were universities and scientists involved in the research process for your digital fabrication exercises?
MV: It was really exciting to work in parallel with so many think tanks in several directions.  Our digital fabrication exercises are based on a good history, as Dr. Fischer, Laufen’s research director, first worked with TU Clausthal in 2008 to create the world’s very first fully functional 3D-printed toilet. It was built and processed on a scale of 1:10 from Laufen’s own vitreous china suspension.

Eight years later this exhibition led us to revive this project. We invited TU Clausthal together with the Federal Institute for Materials Research and Testing (BAM) in Berlin to build and process the Il Bagno Alessi toilet in a scale of 1:2. At the end, we failed because of the increased size and time restraints. The toilet had to build in four parts; printing of the parts takes 16 days and the assembling and processing added further risks. Reducing the time of the printing process is one of the targets in this field. The development of bigger machines to process bigger parts is on its way, but that will need some more time and ceramic expertise.

This exhibition includes a sculpture by Michael Hansmeyer and Benjamin Dillenburger, which was developed at the Chair of Digital Building Technologies, ETH Zurich. As part of the Architecture during Art Symposium, an annual symposium established by Laufen and held at the same time as Art Basel, we invited Benjamin Dillenburger as the keynote speaker to discuss digital fabrication in architecture. Fascinated by the topic of additive manufacturing, we furthered the dialogue. Benjamin Dillenburger and Michael Hansmeyer are trained architects who focus on digital fabrication aiming to create architecture. They explore unseen levels of resolution and topological complexity in architecture by developing compositional strategies based on purely geometric processes. So here, the design process using an algorithm developed at the Chair of Digital Building Technologies, ETH Zurich was a focus of interest.

The Atelier oï SaphirKeramik sculpture displayed in this exhibition was produced using a 3D print process developed by the company Lithoz. They were the first to process high-performance ceramics in a 3D printing process with extremely high density, resistance and the utmost in precision. The sculpture is made from highly pure aluminium oxides, the component that makes our new ceramic material, the SaphirKeramik, so dense and hard. The finished parts boast the same material characteristics as those of conventionally produced ceramics.

TLmag: And how did Toan Nguyen work with the SaphirKeramik?
MV: Toan was one of the first designers to work with the new ceramic material. He has designed his own collection in the Laufen assortment, so he knew he could work with sharp angles and precise lines. Toan Nguyen actually created a steep sculpture titled Water, which played with the depth of the piece to enhance the mystic element of the water. You only see the surface of the sculpture, filled with Yves Klein blue-coloured water. The surface shows lighter shades on the shallow angular wavy parts and surprises with a more intense blue where it is steep.

TLmag: Taking into account the experimental nature of the company, which technologies and materials is Laufen excited about in the near future?
MV: The processing of art pieces was a learning experience in itself. Realising some of these designs in our factories was only possible by thinking differently. The findings will be incorporated in the production processes into future industrial products, and will enlarge the freedom of shaping objects. For example, for a closed glazed surface we found a solution to hang large pieces in our oven, which is not so easy if you keep in mind that you have to find materials that can sustain the heat of something close to 1.300 degrees Celsius.

We also came up with a new way of ceramic rapid prototyping using 3D prints. For the piece designed by Alfredo Häberli we experimented with layer-wise deposition of the fluid ceramic suspension.

As we developed SaphirKeramik we added aluminum oxides to make the ceramics super sturdy, and to realise highly complex shapes; with doing so we use a component of technical ceramics. In our exhibition we show a piece that’s 3D printed from highly pure aluminium oxides.

Ceramic is the material we will always be obsessed with; we will keep increasing our knowledge and learn from other industries. In terms of technologies the field is wide and we will explore and implement in our processes wherever it makes sense. But the key for our future is to keep up building the intelligence of the company by enhancing the spirit of innovative thinking —and for this, the whole exercise was just brilliant.

TLmag: Throughout the show’s tour, and now in London, which pieces have garnered the most curious reactions from the audience?
MV: It was quite diverse, but Konstantin Grcic’s conceptual piece showing his vision of the complete bathroom —it weighs more than 300 kilos— draws attention. There’s  Roberto and Ludovica Palomba’s “world as a disc” sculpture, which was perceived as beautiful and meaningful. Also, the unique aesthetic of the Benjamin Dillenburger and Michael Hansmeyer object was photographed really often. And the reference to Fischli/Weiss in the “handmade” piece by FLAG amazed as much as the 3D printed technical ceramic, which made its premiere in the art world.

A Curated Art Show. What? is on display at the Design Museum until September 24. 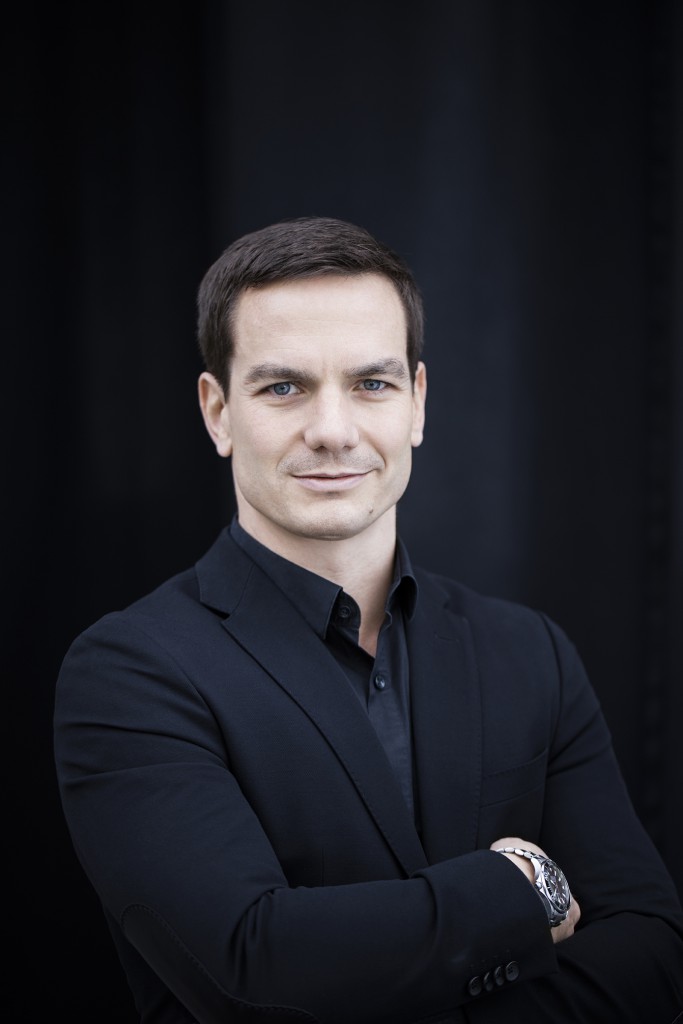 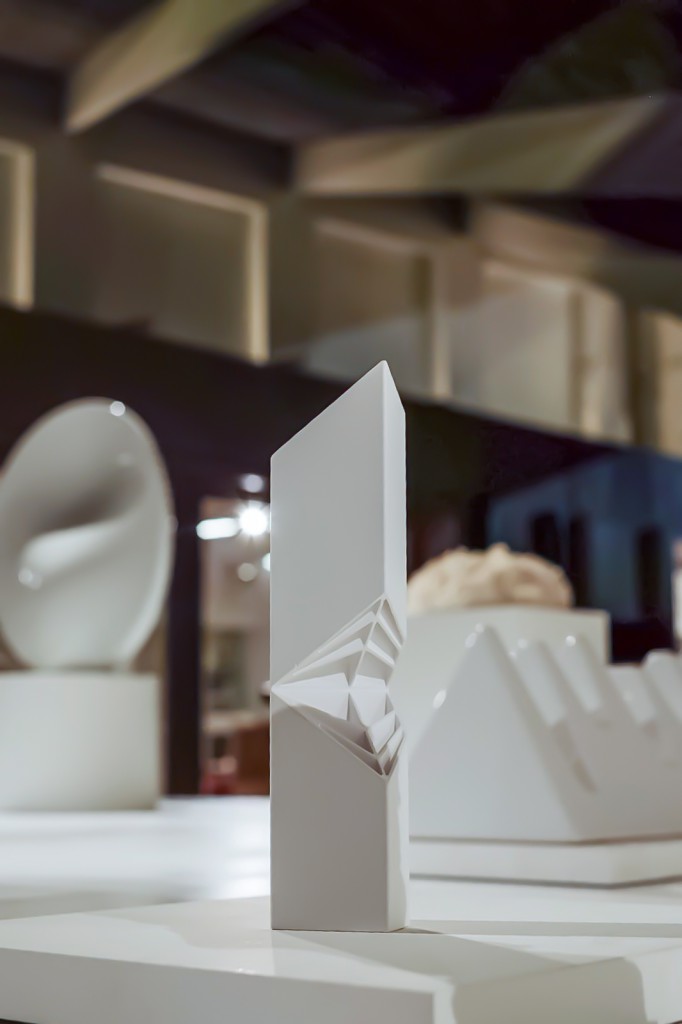 Exhibition view at the Design Museum. 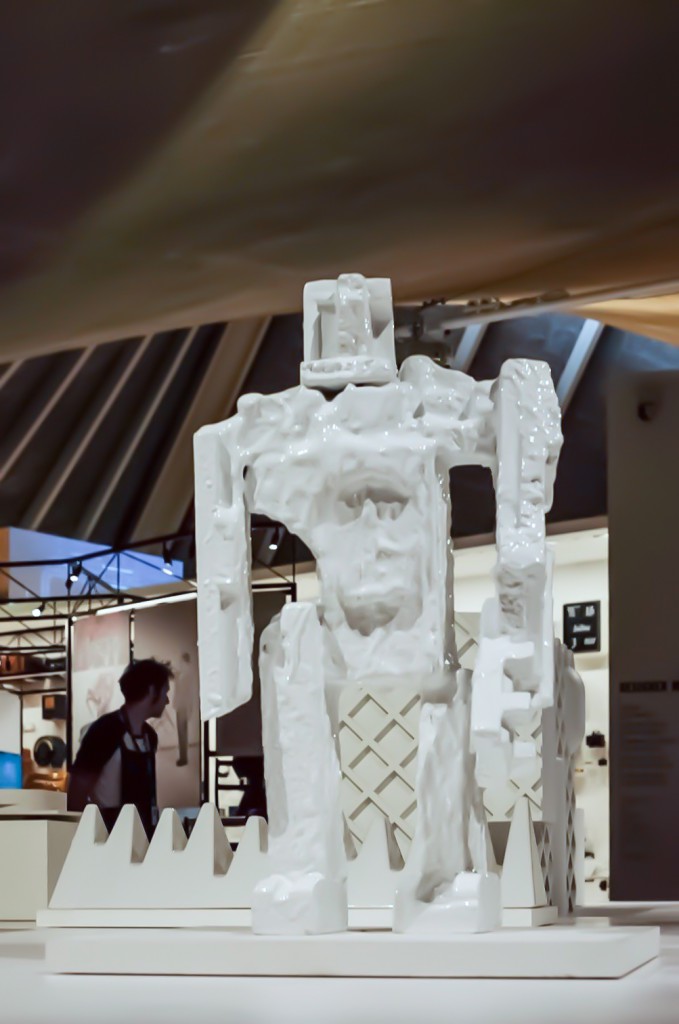 Robotic references in one of the objects, on display at the Design Museum. 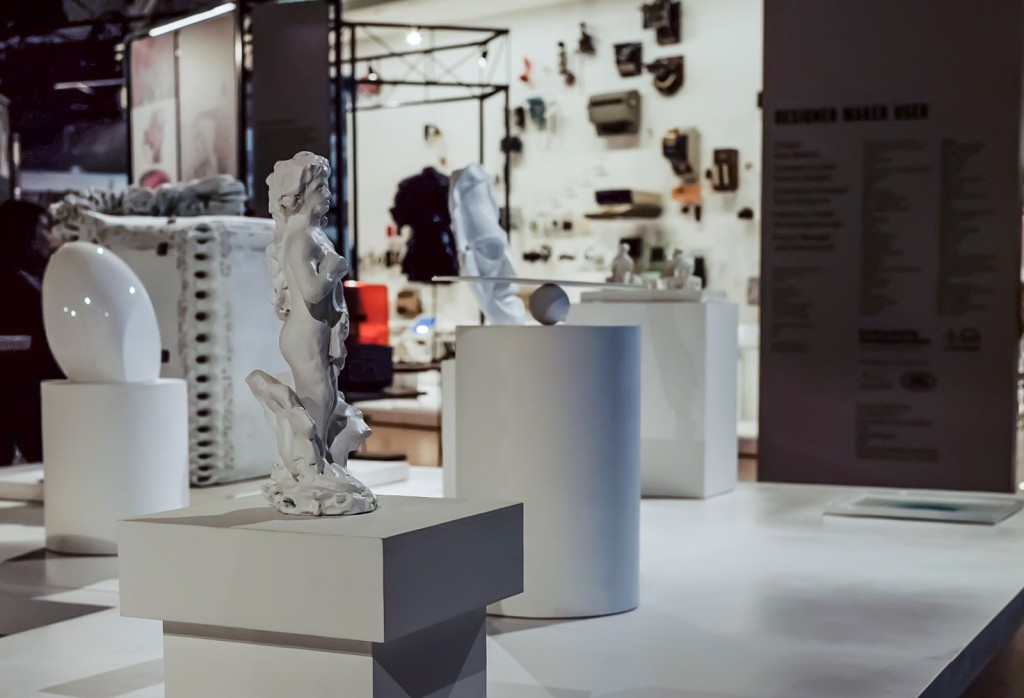 Exhibition view of What?

A view of the exhibition, curated by Beda Achermann 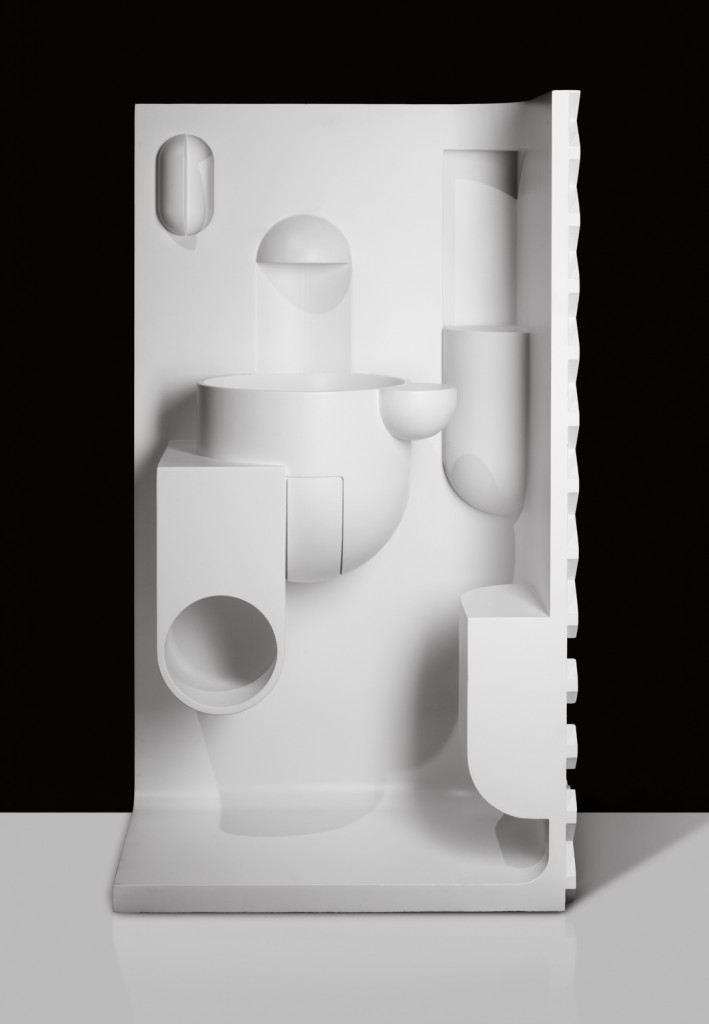 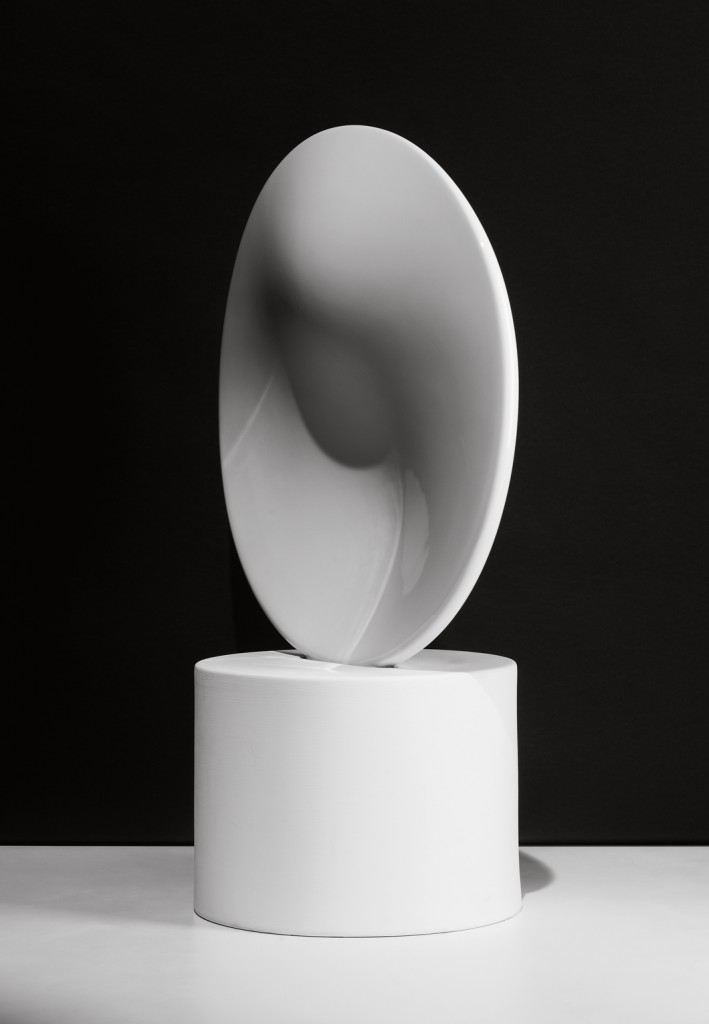 The Palomba's "world as disc" sculpture 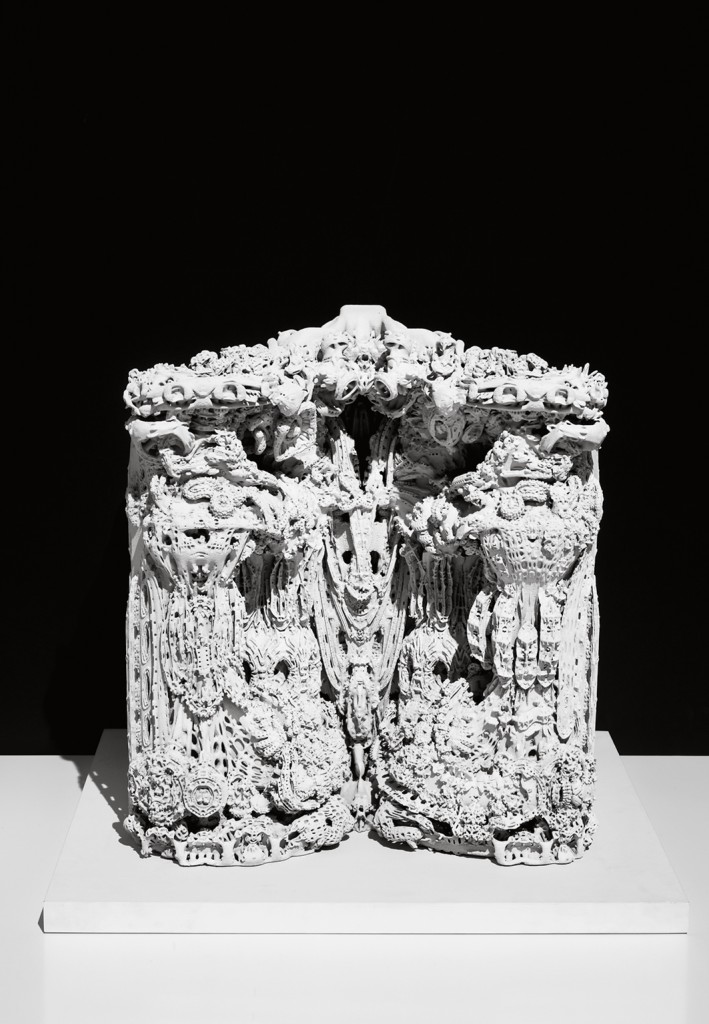 A crowd favourite: the piece by Benjamin Dillenburger and Michael Hansmeyer 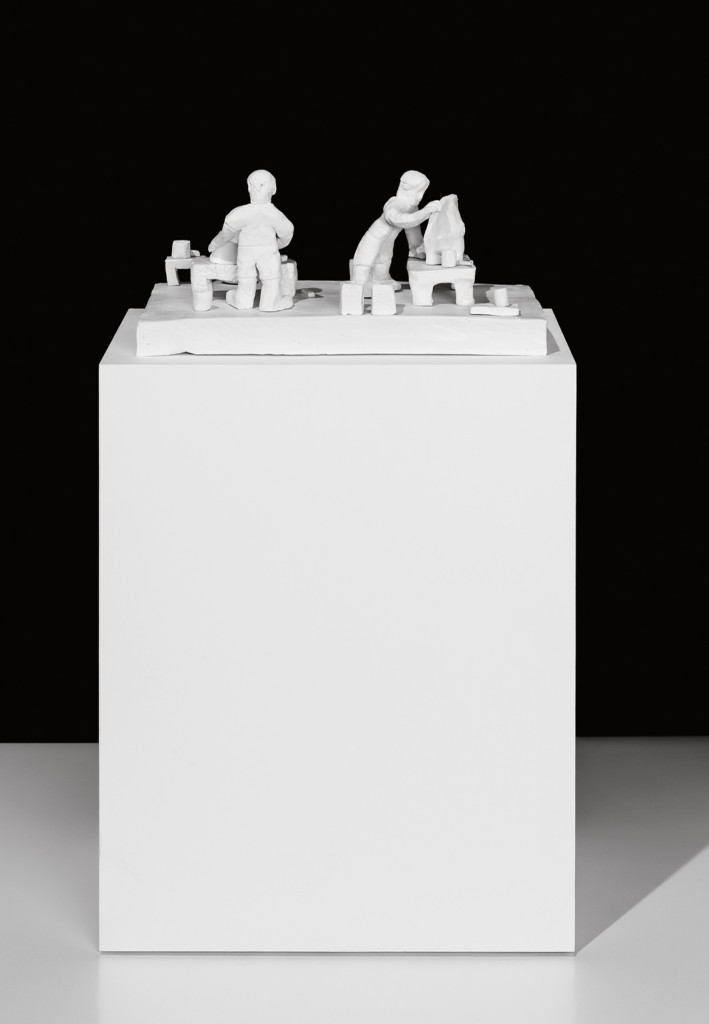 The “handmade” piece by FLAG
‹ Back