Sculptor Liza Lou talks to TLmag about her upcoming solo show and the career, ideas and communities that have led her to this point

In 1999, contemporary sculptor Liza Lou was sitting in a bar threading bead by tiny glass bead onto a metal wire. She reflects this was a little bit of a strange thing to do but she was in her 20’s and she took her art everywhere. A man sitting next to her, intrigued by her activities, asked “so what are you doing?” and Lou told him about her plan to make one-quarter-of-a-million of these threaded wires. She had set herself the mammoth task of creating a beaded lawn. Unbeknownst to Lou, the man took out his watch and started timing her. “Basically that will take you 40 years if you do that yourself”. With this simple calculation the young Liza Lou, a self-described “super loner”, realized that if she wanted to continue working with beads she would need to seek help. And not just a little help, but a lot of help.

Lou was devastated by the knowledge that her valued solitude would be broken. Indeed, she had produced her career-launching sculpture, Kitchen (1991-1996), single-handedly. The almost life-sized kitchen that was mosaiced with millions of tiny glass beads had taken five years to complete and had given her tendonitis. The stunning result was a powerful comment on the value of women’s labor, right down to the carefully beaded crumpled crisp packet. However, this way of working was not sustainable so Lou was faced with an ultimatum: work with others or find a new way of working.

Refusing to give up on beads, in which she saw a huge potential “to talk about women’s work, talk about feminism, talk about craft, talk about gender”, Liza Lou started a journey that would take her from America to South Africa and back many times over and be collected by numerous institutions globally including The Museum of Modern Art (MOMA) New York, Palazzo Grassi, Venice and The Whitney Museum of American Art. It led her to work with all sorts of communities.

In the earlier stages of her career, Lou recruited help from anyone who would lend a hand–from the public visiting museums to people in homeless shelters. Eventually, this grew into the need to hire studio assistants and Lou started to wonder if she could make a more tangible impact on others. She thought: “Maybe I could work with women where it actually made a sizable difference to their ability to survive in the world and maybe there is a place where people actually work with beads and have an indigenous relationship to the material. And that lead me to South Africa.”

Far from being disappointed with having to work with others, it opened a whole new world for Lou. “I love working with other people, it’s really been the joy of my life.” She fondly describes sitting around the table in her studio in downtown Durban with women threading beads, talking and sharing stories–fostering relationships that would have been unimaginable to her younger self. Projects such as Continuous Mile (2006-2008), a monumental work consisting of 4.5 million black beads woven to resemble a mile-long cotton rope coiled into a cylinder, were made in this community-based way with Lou sitting side-by-side her employees, co-creating.

Despite her love for this way of working and the “wild place” of juxtaposing cultures that Lou had made her home, she decided to move back to America. “There’s a moment when you really have to make a decision about yourself. About where you want to live your life. About where you are going to put down your permanent roots” Lou explains in her particular way of talking which mimics the rhythmic repetition of threading beads.

With this cross-continental relocation, there was also a shift back to a slightly more isolated way of working which relies on commissions of components made in Durban which Lou then assembles and transforms into artworks in LA. She describes this process as being similar to how most artists “go to the art supply store to buy their canvas or whatever.” The difference is  “they don’t know Joe the stitcher who stitched that canvas. They don’t know Mary, the lady who put the paint in the jar.” Liza Lou does know the people making her raw components whose funerals and weddings she has attended and whom she sees often when she “commutes” to South Africa where she still splits some of her time. The distance between labor and consumer is a recurring theme in Lou’s work and is embodied in her practice itself.

Liza Lou’s upcoming solo show, Liza Lou: Classification and Nomenclature of Clouds which will open at Lehmann Maupin Gallery in New York on September 6, continues her investigation into themes of labor and value. However, the new works presented in this exhibition such as Nacreous (2018) and Nimbostratus (2018) and the monumental piece The Clouds (2015-2018) which was first exhibited at the Biennale of Sydney earlier this year, show a marked change in Liza Lou’s art making. “It’s the first time I’ve made work where I’ve really shown my gesture.” Previously, Lou’s works rendered her hand invisible. It was impossible to tell which blade of glass the artist had made or which bead she had threaded. That way of working relied on having a vision, trusting that vision and executing it. Lou reflects that this method took “a certain kind of courage.” However, her newer works see Lou take up a paintbrush and says“ okay, here’s how I draw, here’s how I paint.” She says “it’s a much more expressive body of work”  which took a whole other type of courage and risk-taking.

The Clouds is comprised of what appears to be many small pieces of fabric. However, on closer inspection, they reveal themselves to be 600 hand-sewn beaded cloths which became Lou’s “canvases”. The artist painted and partially smashed the beads to show the intricate structure of threads underneath and capture the texture of clouds.

The subject matter of clouds was something Lou started exploring in South Africa, triggered by Durban’s “incredible, dramatic thunderstorms. Cracking thunderstorm…”. Lou describes how the locals casually took the violent weather in their stride but, as someone from the outside, the black apocalyptic phenomena that took place high above was fascinating.

The exhibition also is also another step in the journey of Lou’s practice which has moved from the literal to the abstract with many pit-stops in between. Again, she credits Durban for the trajectory her work has taken. Lou says that in America she used beads as an ironic tool to valorize and comment upon the ordinary. However, deep history of this material in South African culture triggered profound insights about her chosen material. “I suddenly saw the simple, humble material, its tremendous beauty and power in itself. I started to wonder, what if I shift away all the subject matter and just let the material do what it might want to do?”

Works in the exhibition that show this transition into abstraction include the Terra series in which monochromatic beads seems to be growing out of their frame, bulging like clouds preparing for downpour; Primary (2018) a totem-like structure in which layers of colored beads seem to be slumped over one another; and Drawing Instrument (2018), a video that combines footage and audio recordings taken over many days of Lou singing and drawing which investigates notions of certainty and uncertainty.

These works are remarkable in their own right and inspire wonder about their intricacy and the patience and perseverance they must have taken. Yet still, underlying these works remains Lou’s persistent ideas around labor and feminism that have traveled with her throughout her career.

“My belief in women’s empowerment, in the power of beauty, in the integrity of action is so embedded in my work that I don’t need to make a placard or be literal. I’m interested in making a difference in the real world. Paychecks. Money to people who need the money, health care to people that need the healthcare. A cesarean to a woman who had HIV.”

Lou feels her very active form of feminism grew out of the fact that she dropped out of art school and doesn’t have a background in academia. Therefore, she is much more interested in doing rather than thinking. “I don’t want to sit in my ivory tower and pontificate about the importance of feminism to a bunch of white people, I actually want to go out there and get my ass on the line. I don’t want to make a difference in theory. I am interested in making a difference in fact.”

As a female artist working with beads, Lou recognizes a positive change. In the 80s, she was “met with an interesting kind of criticism, about beads being a decorative material, about it not being a serious material, about it being a craft material which was sort of against the rules in art at the time.” Now the discussion of whether craft can be art is somewhat outdated and there are “many many artists working with beads and decorative materials in interesting, flamboyant and fascinating ways who are not taking any flack for it.” She feels that Kitchen was a part of opening up the dialogue around materials.

Another discussion that Lou hopes Kitchen contributed to is about what feminism can look like. “I wanted to make a sexy feminism.”

Lou describes her early career as being preceded by the likes of Judy Chicago and other female artists of the 60s and 70s who used materials such as menstrual blood and tampons to set a precedent for creating conversations around gender. “You had to do radical things early on. And then, as time passes, it is up to the next generation of women to take the torch and say here’s the next thing we need to talk about. How do you embrace beauty back in? How do you embrace sexy back in? seduction back in?” Seeing a gap in feminism and what it was possible to talk about Lou embraced beads and set about creating art that explored what it meant to be female.

Reflecting on the now, Lou feels the current “conversation around feminism has, fortunately and unfortunately, become a little bit of a trendy topic. It needs to continue to be a meaningful topic because there is a lot at stake right now.”

After carving out a career, bead by bead, for over 25 years Liza Lou still feels there is “yet more to be discovered” from her chosen material. Above all, Lou says “I want to make art that is inspiring to the next generation. That’s my biggest goal. That’s what I strive for.”

‘Liza Lou: Classification and Nomenclature of Clouds’ will be on display at Lehmann Maupin Gallery from September 6—October 27, 2018 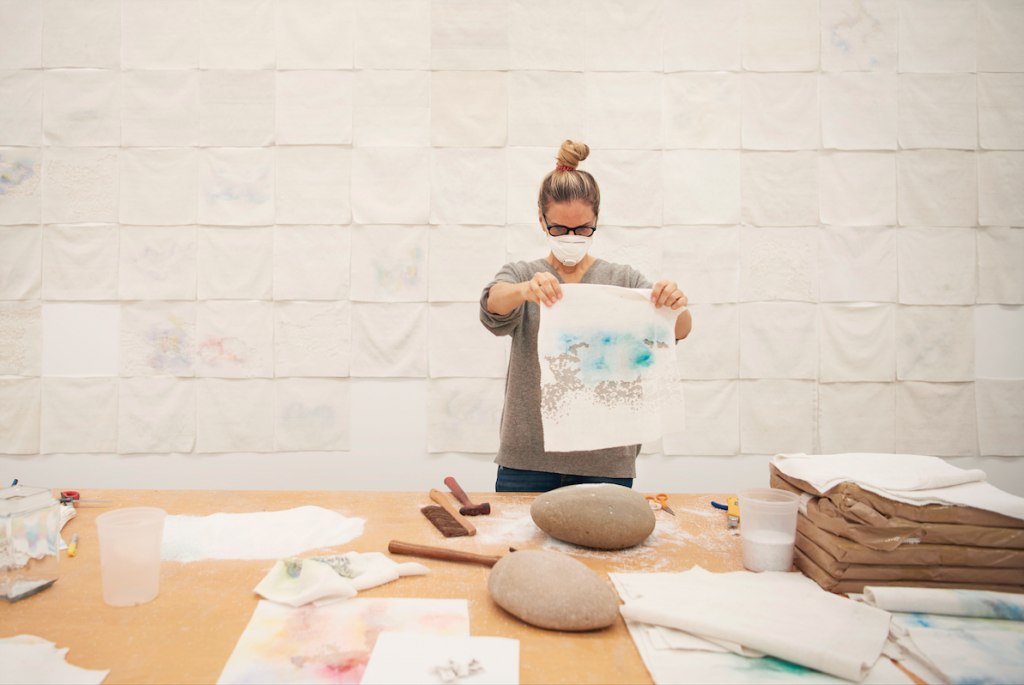 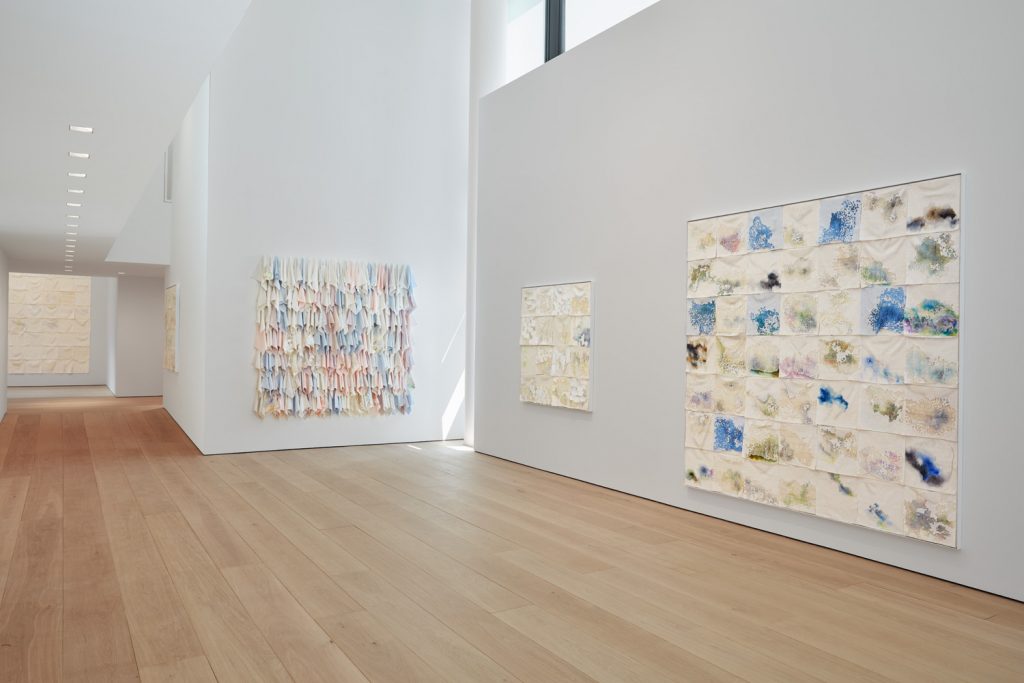 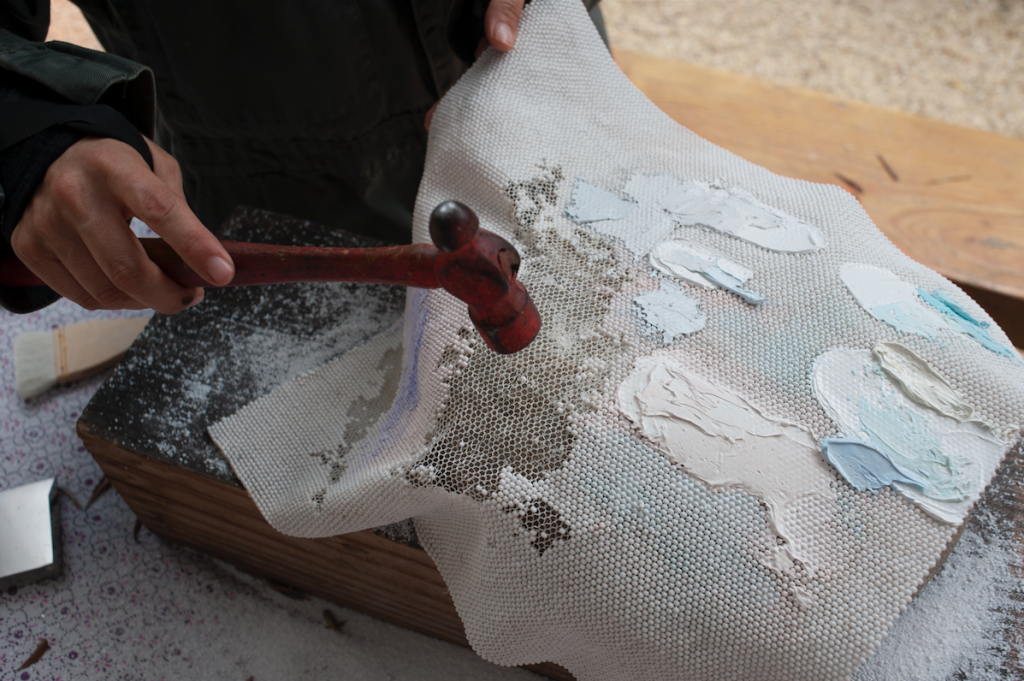 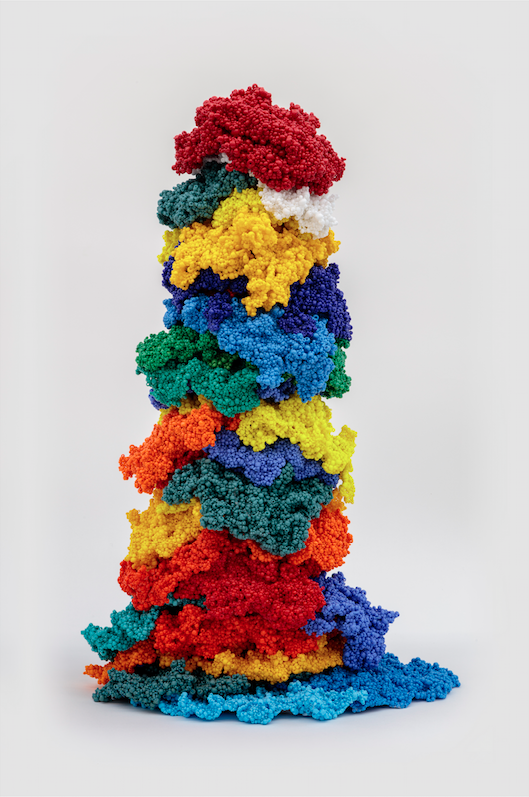 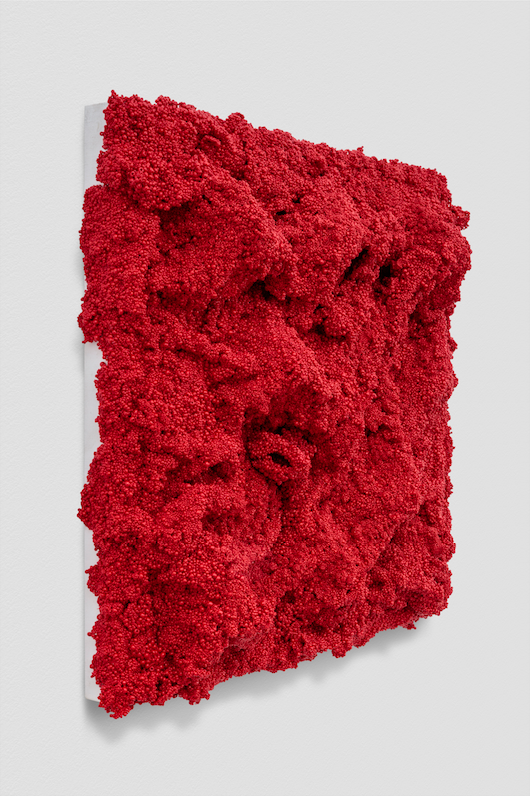 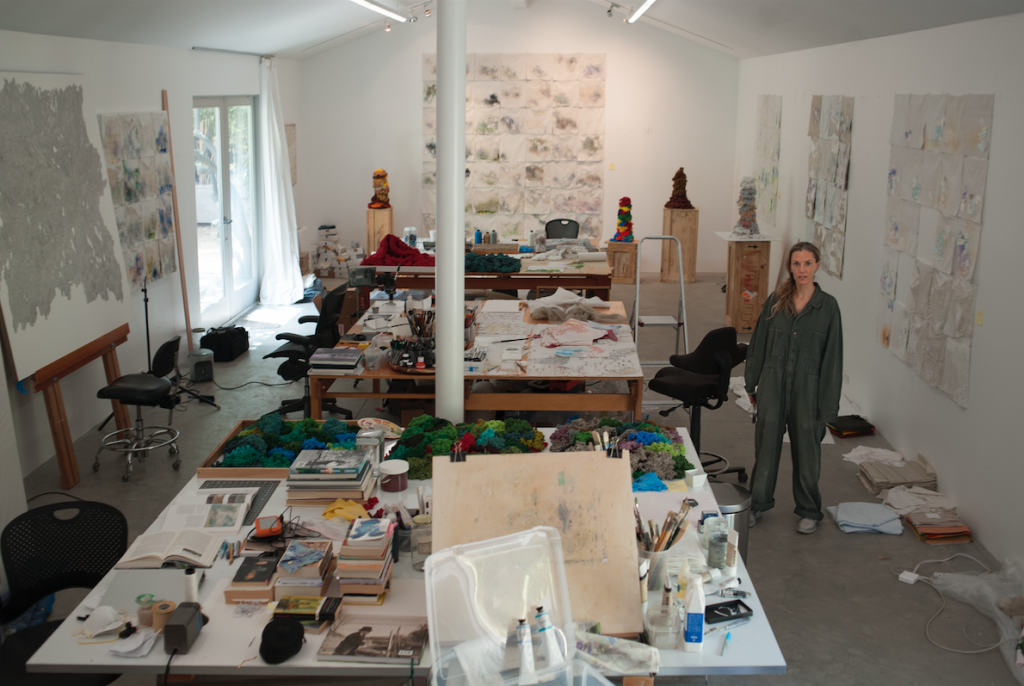 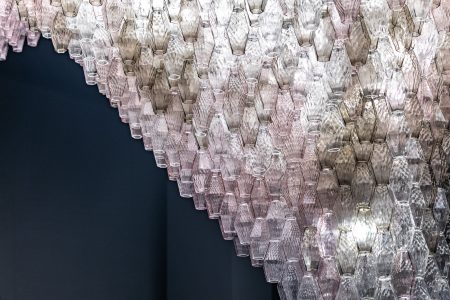