Having mastered time, the Dutch designer now tackles space and motion: that’s where Close Parity, on display now at the Carpenters Gallery Workshop in Paris, comes in.

In theory, the pieces that make up the Close Parity series should only exist in a Tim Burton universe —or the gravity-less world of a four-year-old’s sketchpad. The large-scale, zaftigly amorphous cabinets are each balanced, somehow, on two facetiously tiny legs.

Having mastered time, a recurring theme in his previous projects —just ask the passengers at Schiphol who become peacefully captivated by his “manual” clock—, he is now tackling space and motion. Newton would scratch his head at the way the Dutch designer has managed to balance the cabinets atop minuscule pairs of legs by using a precise set of internal counterweights. But don’t tell Baas it’s a complicated system. To him, the more illogical the Close Parity pieces, the better. “Maarten wonders why IKEA still didn’t approach him,” he wrote on Instagram while seeing the nine men it took to carry an item in order to install it at the Carpenters Gallery Workshop in Paris.

Before the opening of the show we discussed physics, along with the m word —mass, as in mass production— and surfing.

TLmag: I keep seeing the posters here in the Netherlands jokingly announcing that you’ve finally grown up. But after 15 years, do you actually have some criticism for yourself?
Maarten Baas: No. (Laughs) That was a stackable chair I made for Lensvelt. I never really wanted to make industrial design, because I don’t consider myself an industrial designer, anyways. But the thing that I was making then happened to be an industrial product. The second version was stackable, and I thought, “that’s such a mature thing for a designer to make.” So I thought I’d better make some fun of it. Don’t make it more complicated than it is! (Laughs)

TLmag: But it’s a shame you’re against mass production. You have no idea how happy my afternoon coffee makes me, and not just because of the caffeine, but because I have the Haphazard Harmony set.
MB: I wouldn’t consider it real mass production, because it’s a niche market. It’s not in every restaurant or hotel chain. It’s still a very small edition.

Those kind of questions, like whether or not a thing is a mass product or art or a series, that’s just the name you give them. I don’t mind if I call it “mass product” or not —it is what it is. Is it only when you sell one hundred thousand or more? (Laughs) I don’t have a definition for that. I just make a product and see if it sells or not.

TLmag: I’ve seen the big placeholder chair at the Marconiplein in Eindhoven, where De Bakermat, your first architectural project, is going to take place. Is there a set schedule?
MB: We are working on it, but it’s a slow process. It’s a big building, quite experimental, so there are many processes behind the scenes to get it done. It’s not really my cup of tea —I’m involved from the sidelines. They are working hard on it, and I think it’s scheduled to be built by the end of this year.

TLmag: Were you involved in the physics calculations of the Close Parity pieces, to make them stand?
MB: We made them in our own workshop [in Den Bosch]. I wanted to have this naïveté, even though it’s a physical product, so I did a quick drawing, almost childish in a way. I like that, in many children’s drawings, gravity doesn’t really count, so you can make a two-dimensional drawing and everything is possible there —in real life they would simply fall over.

Starting from there, I thought, “let’s try to make it real.” We built it by putting counterweights in it to make it stable. It was a big challenge. It should look as if it’s going to fall over. The more it looked like that, the better it was. I wanted them to be extreme, top heavy, leaning left or right. As minimal as possible, with the legs as close as possible to each other. A very illogical shape! We had to fight all kinds of nature rules to make it stand. But we managed to do it… so that was nice!

TLmag: When I see your clock series, I think they were made possible by the increasingly low cost of digital recording technologies. Are you by any chance exploring using VR or AR in an upcoming project, given the fact that they’re going in the same direction in terms of availability?
MB: Yes, at the moment I’m working on a project in which VR is implemented. But actually, I don’t care at all about those new technologies! It always works the other way around: with the clocks, I had the idea to made them like that, and I needed the technique to do it. That’s the order. Using the technique is not the goal in itself.

Now I’m indeed working with VR. I don’t know if this project is going to work out, but at least I’m trying something. It’s a new project and I can’t say too much about it yet… but I have an idea, and then it happens that I need VR for that, and then I dive into that technique to see if I can make what I had in mind. So, yes, I’m exploring those techniques, but it’s almost as if I don’t want it, but I need it to make what I want to make. It’s the other way around of how other people work.

I like simplicity in my design, so I don’t want my designs to lean on the technique. I don’t want the technique to be the smart factor; it should be hidden. It should look very simple, as if you could make it yourself in one afternoon. If the technique is leading, then it looks very complicated and people are surprised about the wrong thing. That’s also nice, but then the credit goes to the engineer who made that technique, you know? The technique should always serve my design, and not the other way around.

Somehow, I always end up using new techniques. It’s a handicap, because it would be much easier if I could make everything with the same technique. But I want to move forward and it makes me go from one technique to the other. I have to reinvent myself to see what happens. But that also makes it nice, because you meet people from so many disciplines.

TLmag: I actually wanted to ask you about one of those collaborators, the animator Niels Hoebers. You did a stop-motion video with him a couple of years ago, called Working My Way Up, that I found heartbreaking: with that escalator metaphor you spoke of forces that “keep everybody more or less at the same level.” Is that a very Dutch way of seeing things?
MB: (Laughs) I don’t know if it’s a typically Dutch thing because I am Dutch and I think this way, and I can’t relate to any other country. Maybe it is.

TLmag: A very Calvinist way of seeing things.
MB: (Laughs) OK, yes! I didn’t see it like that! It could be!

TLmag: Coming from Latin America, I know the idea of having a socioeconomic safety net regardless of personal effort is an insane thought to many people.
MB: I made it with Niels after the crisis happened. I thought it was funny because, in the end, crisis or not, in the Western world it doesn’t really affect anyone. The majority of the Western world… it doesn’t matter if you have success or not. It’s not that much of a deal to be on top of something or in the middle or lower. Whether you work hard or fall down, it doesn’t matter that much. Stressing about moving your way up or stressing about falling down, it doesn’t really matter. I don’t know if it’s typically Dutch or not… it is kind of typical me.

TLmag: Another one of your collaborators, the endlessly in-demand chef Sergio Herman, said that time was his enemy. Have you made peace with time?
MB: I see time as kind of a huge sea of possibilities. I don’t see it as an enemy. It’s a sea with waves: if you’re a surfer and you want to anticipate the waves, sometimes you have to paddle a bit harder to catch it. Sometimes you have to wait for the next wave. You have to surf on it and see what happens.

Close Parity is on display at the Carpenters Workshop Gallery in Paris until March 23. And heads up: the Baas retrospective Hide & Seek, originally shown at the Groninger Museum, will be traveling to Ghent in the springtime. 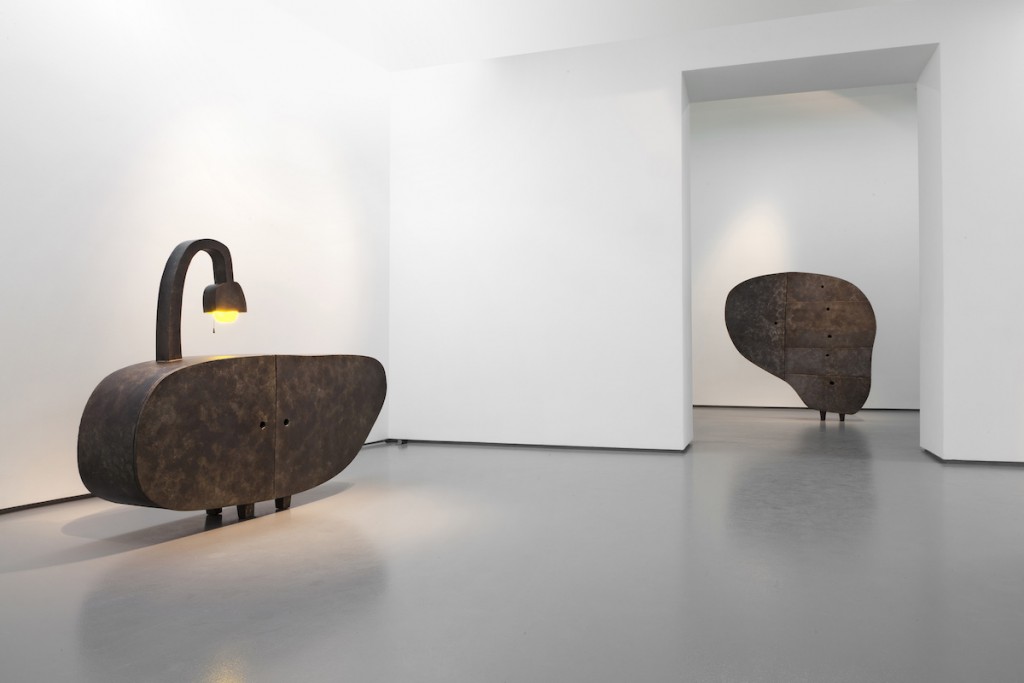 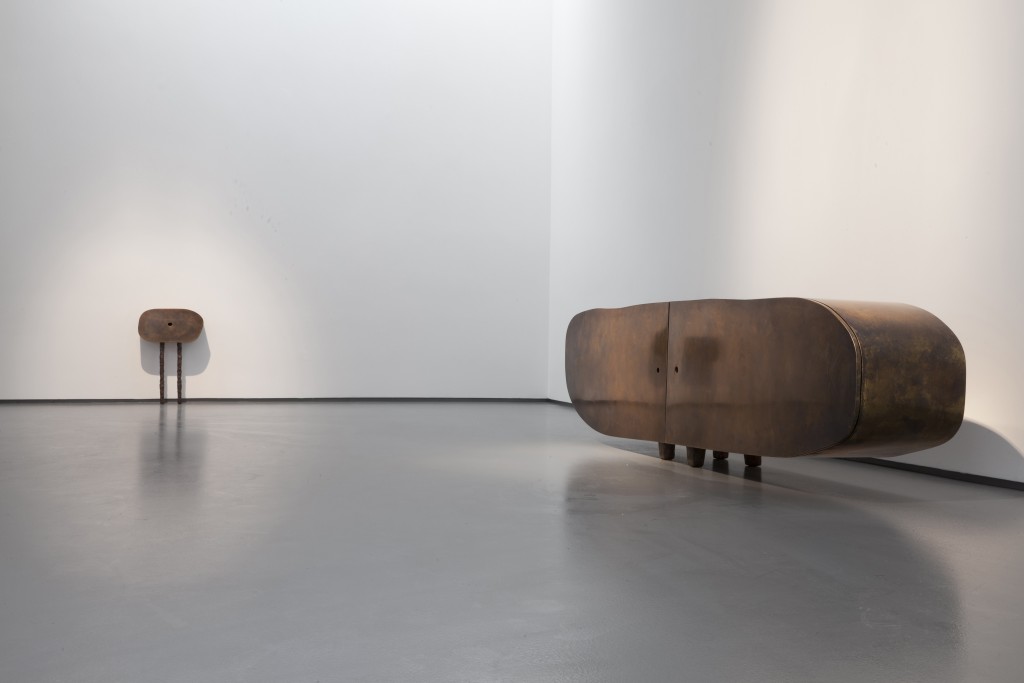 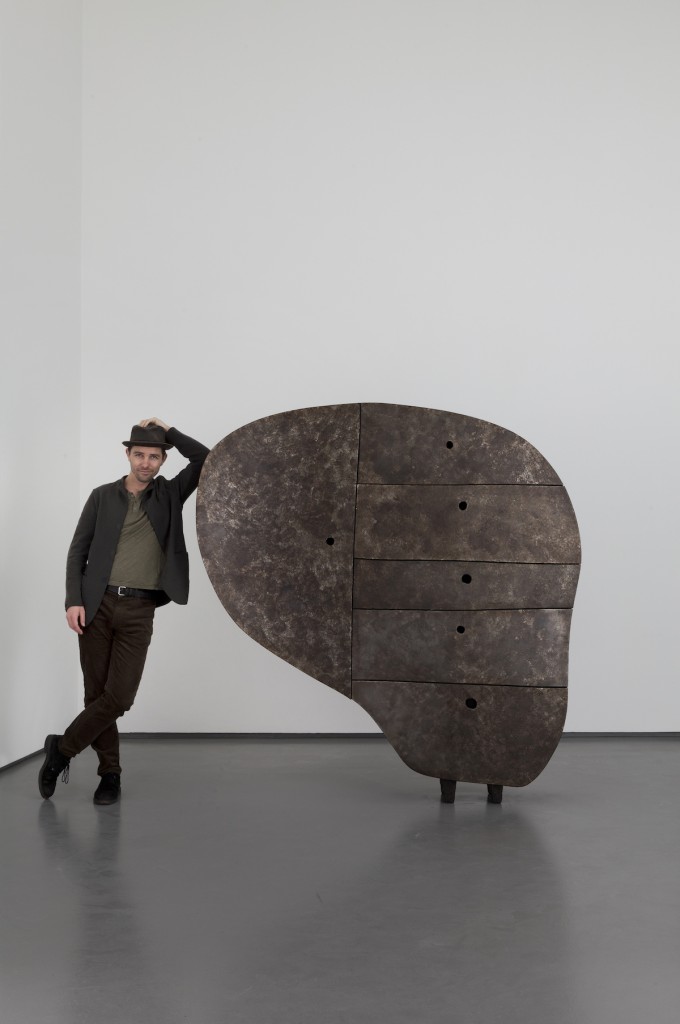