A simple neon-sign depicting a ribbon on a street in the 9th arrondissement, Paris, is easy to pass by without noticing it. However, this modest sign belies the world of wonder, poetry and exoticism that hide behind the storefront of artist and designer Pierre Marie’s newly opened gallery. The gallery opened on September 6 with a showcase of Pierre Marie’s most recent work – a tapestry entitled Ras el Hanout. The monumental woven artwork references the spice blends of Northern Africa and depicts spices such as cloves, cumin and pepper through a bombastic color palette and graphics that were developed over an 18 month period. The tapestry has now moved Venice where it is on display at Homo Faber until September 30. His gallery marks a new venture into interior design as well as creating a space that will become a form of autobiography where Pierre Marie will exhibit his work and collaborations with craftspeople.

Another of Pierre Marie’s work currently on show is Le Jardin d’Hiver, an installation created for the 2018 edition of the Design Parade. Designed especially for the ground floor of the former archbishop’s palace in Toulon, the installation consists of an array of elements including lighting, furniture, interior wall decoration and stained glass windows. Each piece is created based on the memories that Pierre Marie has of a trip to Sri Lanka and considers the poignancy of memory and the exotic.

TLmag catches up with Pierre Marie to discuss his new endeavors:

TLmag:As a practicing artist/designer, what inspired you to open your own gallery in Paris?

Pierre Marie: I have always been impatient which can be considered as a defect. Yet I try to turn that aspect of my personality into a positive energy. The kind of energy that makes you wake up with a dozen ideas and pushes you in the right direction to achieve them.

People had seen the renovation project of my own apartment in Paris and also my show for Design Parade Toulon. Although, it is still new for me to be working in the interior design field.  At that stage, I wanted to own a space to keep experimenting and a place to continue showing the public my ideas and new creations but in a global way with a certain freedom too. I wanted to create an anti “white cube” space and to present my work into a modular yet precious setting that would be in my own image.

Moreover, I haven’t met a gallerist with whom I enjoyed working with yet and these things can’t be forced. It is like a love affair. You have to meet the right person I guess. And then there are no galleries that represent the kind of work I do really. I would not fit into an Art gallery or in a Design gallery. So I had to come up with a new idea, one that would suit me perfectly.

Where do you position yourself as a practitioner as you seem to be a maker, designer, artist, curator and now gallery owner? Do you lean towards one of these categories over another?

Somewhere in between a designer and an artist. In French, I like to call myself an “Ornemaniste”, which means an expert in ornaments. Someone who could work closely with architects and design a rug, a stained glass, a bass relief, lighting, objects, furniture, etc. It once was a real profession but it disappeared when design became an industry. Society wants to put you in a specific box but I’d rather occupy several of them or even come up with a box they wouldn’t have thought of.

The decorative crafts in your work seem to take a lot of time to produce. Why have you chosen to work with slow-paced crafts in our fast-paced world?

I would not say it was a choice really. But it is really pleasing. Coming up with an original idea, an original design requires time so I don’t see why manufacturing or crafting them would be quick.

What challenges or surprises have you encountered in the process of preparing the gallery?

Paris has a very annoying administrative unit in charge of maintaining the architectural style of the city. Which could be a good thing if it applied to every shop that opens in our streets. But, most people don’t make their renovations officially which results in streets with a lot of awful façades. I decided to play by the book and declared everything I intended to do to renovate my store and turn it into something beautiful and neat.  But they were very negative from the start and would not let me do what I planned to do. It delayed my renovation for almost 5 months.

The nice thing about it was that I had to remove almost four layers of the storefront to find the original one from the XIXth century. It was really moving and exciting. I felt like an archeologist. So before it became my gallery, the space was an antique shop, before that it was a guitar shop and originally it sold fabrics that were used for lingerie. I was also very surprised that the colors of the original storefront perfectly matched the color palette I had developed for my gallery space.

Your work is inspired by travels, for example, North Africa in the tapestry ‘Ras El Hanout’ and Sri Lanka in the ‘Jardin d’Hiver’. How do you decide where to go?

It’s pretty random and sometimes you don’t have to go that far to find inspiration. It has been three summers now that my boyfriend and I have travelled around France on our bikes. It was all his idea and, I must admit, I am now addicted. It is such a unique way to discover my own country at a human speed, a human scale. You can see the landscapes, the flora and the architecture evolve under your very eyes as you are pedaling from one region to another. It also helps me to develop a certain sense of geography, to add precise marks inside the mental map I had of France which was quite hazardous.

The vibrant green of the Jardin d’Hiver is very striking, creating an immersive atmosphere was it difficult to find the particular color to use?

This specific color is one that I saw a lot while visiting Sri Lanka. A lot of buildings and houses are painted in that specific hue. I would not say it was difficult to find the exact hue but the process was interesting. The whole Jardin d’Hiver show was questioning the idea of Exoticism as an inspiration. Trying to explain how  memories create a distortion of the reality you experienced while traveling far away.

So it was all a game of closing my eyes and try to remember a color. I am very happy with the immersive effect it produces, it feels like visitors enter into my memories immediately.

Could you tell us about the pieces in the Jardin d’Hiver that you are particularly excited to show?

This show was a great opportunity to show how strong drawings and ornamentation can be as the starting point of a decor rather than the details you think of at the end of the project.

I loved every piece I created for Jardin d’Hiver. It is not the first time that I have designed a stained glass piece with Ateliers Duchemin nor a rug with manufacturer Robert Four in Aubusson.

A new experience was working with enamel tiles with Les Emaux de Longwy. I visited the manufacturer in the East part of France especially for this project and really enjoyed working on this new technique. The kind of drawing it requires is not so far from the one I would do for a stained glass. It was very interesting to see how knowledge can interact and that my work creates a link between them.

Pierre Marie’s gallery can be visited by appointment only at 21, rue Victor Massé in the 9th arrondissement, Paris. 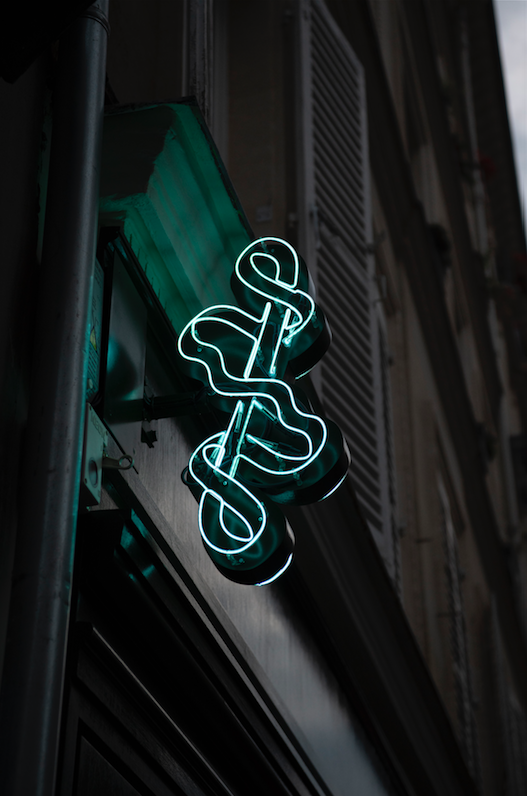 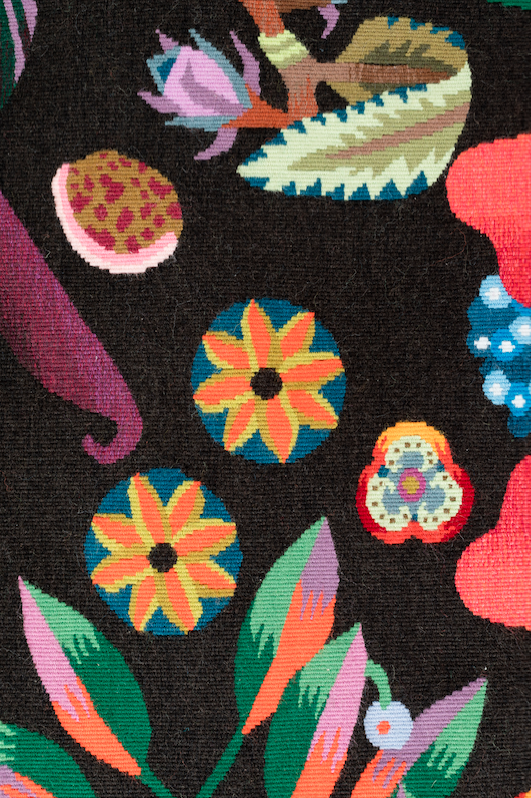 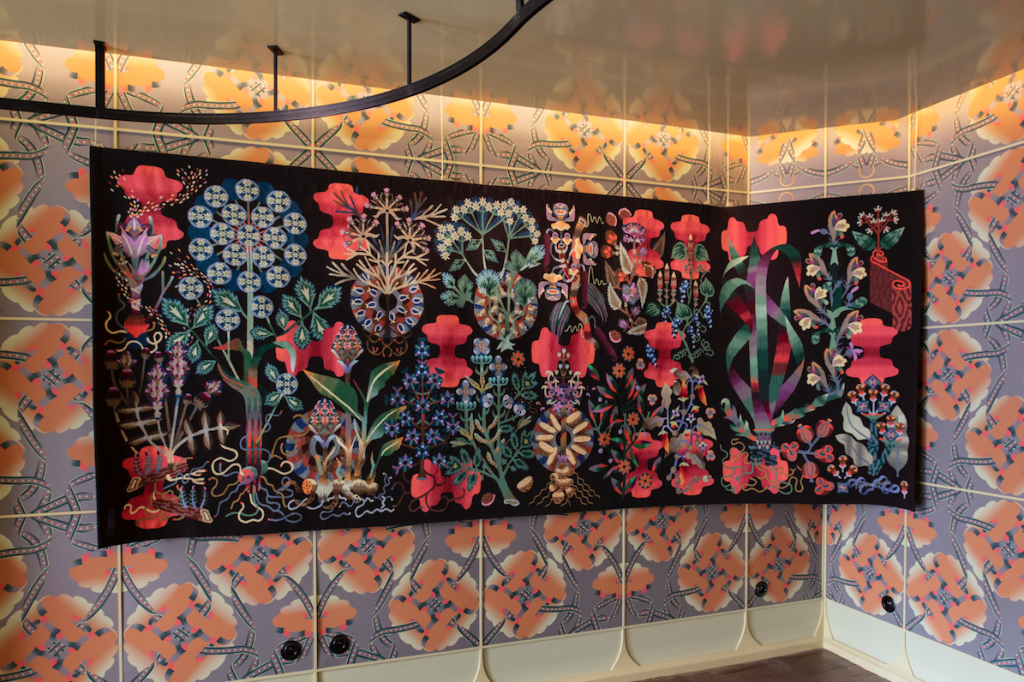 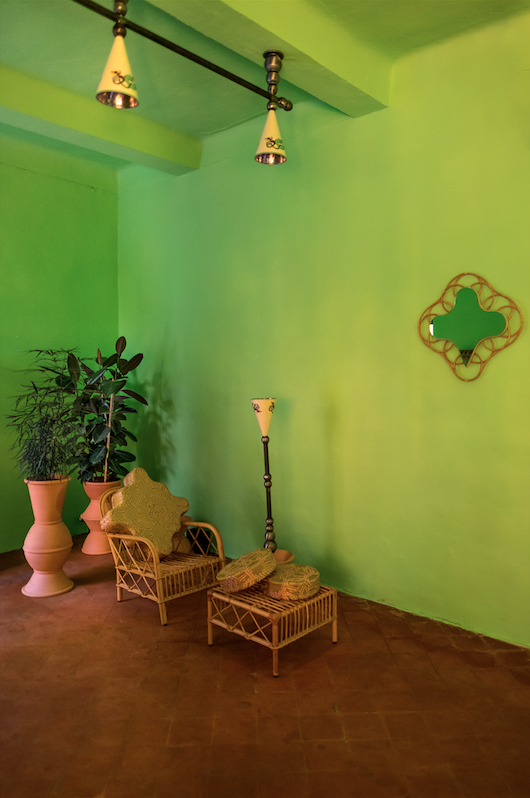 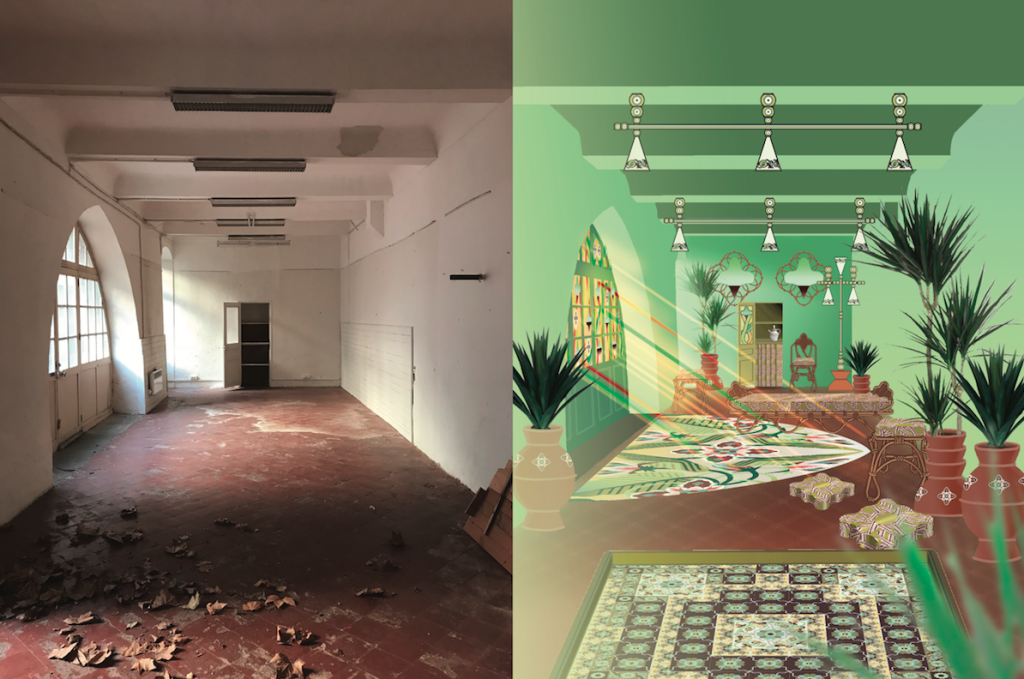 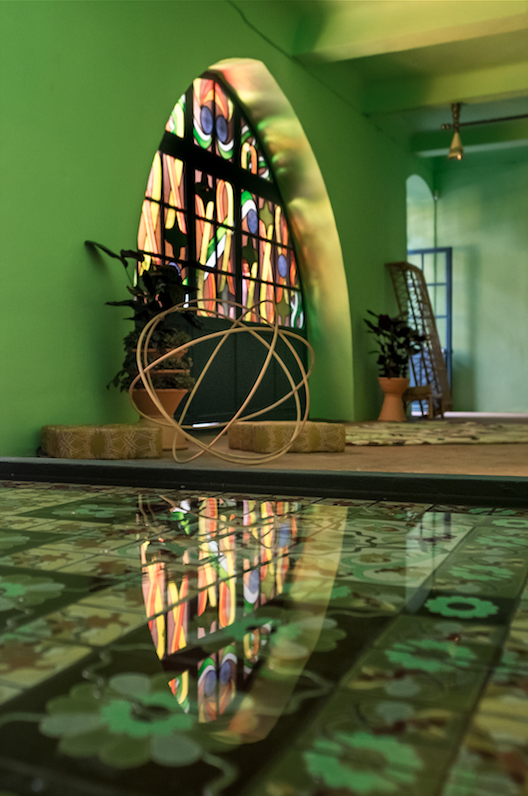 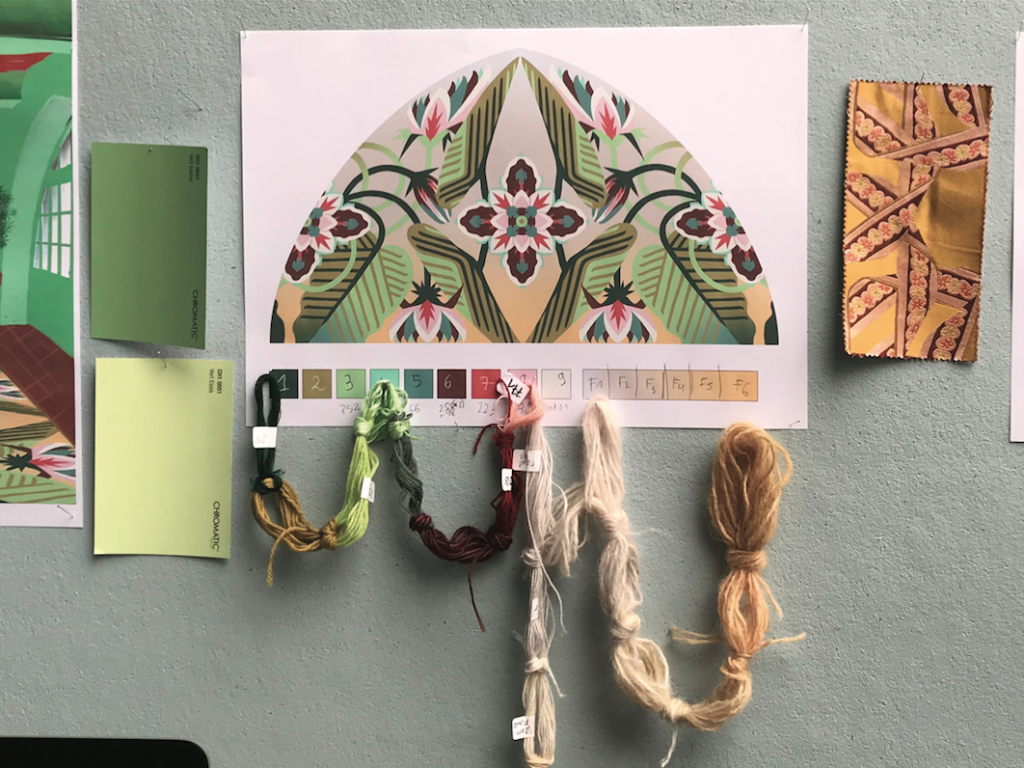