Room with a View by Reinier Bosch

Winter Forms / Spring Forms
Excellence & Creation
“I have this idea that everything is a future projection; a dream.” Drawing from his own training with the Chinese meditation method of Qigong – in which one visualises and anticipates life goals – Amsterdam-based Reinier Bosch conceives the highly abstract Room with a View series. On show as part...
Scroll right to read more ›
Text by Adrian Madlener
Photography by Jeroen van der Wielen

“I have this idea that everything is a future projection; a dream.” Drawing from his own training with the Chinese meditation method of Qigong – in which one visualises and anticipates life goals – Amsterdam-based Reinier Bosch conceives the highly abstract Room with a View series. On show as part of the Dutch designer’s first solo show, at Zurich-based gallery Roehrs & Boetsch, the two-part collection explores the metaphoric potential of minimalistic and sublime shapes. “These objects can be seen as tunnels within angles that emulate the notion of projection,” Bosch explains. “You have to step into them to have your own experience. I proportioned these sculptures to correspond with the human scale.” Produced as semi-circular geometric tubes, Room with a View’s duality of interior and exterior is expressed through divergent materials, colours and surface treatments; attracting the viewer’s attention. As one engages with these experiential objects, they are unable to see what lies beyond the curve but are guided through a set path of internal and materialised reflections. In a second-phase series, Bosch designs resin monoliths in monochromatic spectrums as to channel light. “Projected from top to bottom, these light pieces play with the ancient idea of life and death; darkness and illumination, the designer expresses. “It should have a full life, like humans.” 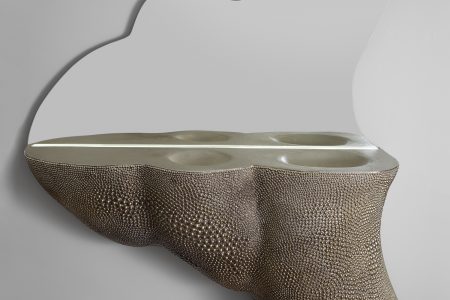 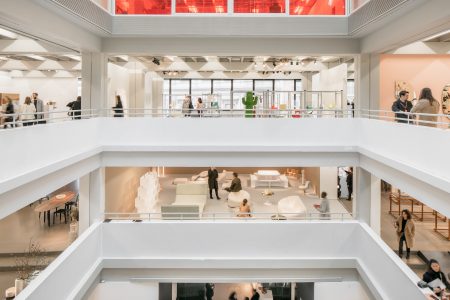