Behind the Iron Facade with Tom Joyce

The rich and complex history of iron is unpacked at Striking Iron: The Art of African Blacksmiths’. TLmag talks to lead curator Tom Joyce to find out more

Iron is something we interact with every minute of every day. Without it, we would not be alive. It is a key component of our blood and is actually what makes it red. We use it to cook. To eat. To transport ourselves. We even use it to describe the world around us – having an “iron grip” or “iron will” implies strength and stubbornness. Despite the importance of iron in our societies, it is a material the receives very little attention. Its blacksmiths are characters that work behind the scenes, forging, smelting, casting and molding. But what of irons history? It’s agency? It’s stories?

Gathered at the Fowler Museum, at UCLA, are 225 iron objects of utility, empowerment and spiritual potency that seek to answer these questions. Following decades of intensive research into the materiality and history of iron, a team of specialized experts and curators led by artist and forger Tom Joyce present Striking Iron: The Art of African Blacksmiths. The exhibition traces the technological beginnings of iron back to around 2,500 years ago on the African continent. Through each object – that range from finely crafted knives to totemic sculptures – the exhibition unfolds diverse narratives surrounding this metal. In tracing the technological advancements of iron which have been closely guarded throughout its history the exhibition invites us to consider iron, and in turn other raw materials, anew.

TLmag catches up with lead curator, artist and formally trained blacksmith Tom Joyce to dive into the mystical, political and fascinating world of iron:

TLmag: How did your interest in the material of iron and its history in Africa come about?
Tom Joyce: When I was learning to forge in America nearly fifty years ago, the profession was drastically waning and all but a few elder smiths who might have been mentors had already laid down their blacksmithing aprons by the time I picked up a hammer. After acquiring basic skills through an informal apprenticeship as a teenager in the rural community where I grew up, I began studying objects that my predecessors had left behind for practical clues and for pockets of instruction to inform my own practice. I sought out places in the world where blacksmiths were still needed and perhaps even indispensable within their communities. This search led consistently to Africa. To this day, few places hold as rich a connection to iron—as a material, and one charged with metaphorical substance and power.

How did/does this material have political influence?
African blacksmiths are inextricably connected to a long and substantial legacy that to this day is intact and flourishing across the continent. Blacksmiths are still crucial in facilitating certain tasks in Africa and are in fact operating throughout the world, in virtually everyone’s backyard—just often undetected. The mechanized world as we know it, stimulated by economic conditions that thrive only when things people need or desire are being made, traded, and purchased, would quickly collapse if blacksmiths active today, at this very moment, were to vanish from their workplaces. Cutting-edge forging activities, whether large or small in scale, remain critical to supporting lives in Africa as in every nation. The blacksmiths who conduct business in global spheres work in an industry and are simply out of public view, performing astonishing technological innovations inside industrial forging facilities that are closed to outsiders. Their ability to move hot iron is no keener in its inventiveness nor more revolutionary culturally than the skills developed in Africa long before science deciphered the wondrous processes indigenous metallurgists perfected through trial and error.

The pieces on display have a mixture of functions from utility to spirituality, why is iron so versatile in its applications?
As lead curator of the Striking Iron exhibition, I was committed to including a broad range of African blacksmiths’ achievements, and conducted comparative research in 196 public and private collections in the U.S. and abroad over the last twelve years. From the thousands of objects viewed, handled, sketched, and photographed, the curatorial team and I distilled over 225 exemplary works of art and utility to tell the stories of how ironworking has shaped African cultures in practical, intelligent, and aesthetic ways.

It was instructive for my curatorial inquiry to approach the tools, forging and smelting procedures, and the objects made from them through the lens of current conditions surrounding manufacturing that require forged components to operate efficiently. Though the scale of production may be different, the parallels are striking, and in contemplating the cultural importance of items made close to home, one can relate these necessities to practical equivalents in Africa. With this proportional association in mind, one can begin to take stock of the splendid as well as the staggeringly massive forged mechanisms churning away at the heart of making almost everything we depend on. These machines produce energy; cultivate and process food; move earth and extract mineral resources; smelt and mill metals; fabricate contraptions that fly, float, dive, and drive; pulpwood into paper; weave plant and synthetic fibers into clothes; transform monocrystalline silica into semiconductors, LEDs, lasers, and solar cells. The parts that industrial blacksmiths forge are deployed in both offensive and defensive strategies to protect homes globally. Iron components they have worked hot allow access to the deepest seas; or they explore space, drifting toward planets and even galaxies far beyond our own. In all of this and more, manufacturing requires the expertise of blacksmiths working furtively around the clock. Each of the objects selected for the Striking Iron exhibition has played such a role. Removed from circulation, they are appreciated now out of the contexts of their manufacture, and we must remember that these artfully forged implements of groundbreaking originality fulfilled and maintained transformations of great cultural significance.

Could you describe a piece in the show that has a particularly interesting story to you and why?
The first forging from Africa that I encountered as a teenager was a currency bar attributed to Mumuye peoples of Nigeria. From the existing literature, I gleaned that it was a forge-welded consolidation of worn-out hoes accumulated by a farming family, and it would have been offered during matrimonial transactions in exchange for the woman’s hand in marriage. The many layers of this folded form were a testimony to the young groom’s training in the field, providing tangible proof of his ability to deliver sustenance for his bride and the family they would likely raise together. This balanced shape of stored material could become anything her family desired from a smith, and was therefore acknowledged as “pregnant” with symbolic potential, as in the promised union of this couple. The swelling at the center is expressive of the melding of families, of ancestral bloodlines extending to future generations, just as iron—considered by some to be the cultural equivalent of blood from the earth—tills fertile ground and affords procreative possibilities. The blacksmiths who conceived this and the extraordinary objects displayed throughout the exhibition have played central roles in the many different communities where forge fires are lit.

How do the pieces on display and iron’s history influence your own artistic practice?
As an artist, keeping my finger on the pulse of the political, social, economic, and environmental conditions that drive this profession is helpful in positing the importance of forging capabilities harnessed by human beings since the early Iron Age. Any place iron is forged offers a glimpse inside a microcosm that affects its encircling environment. Sometimes the results are of massive consequence, as in times of conflict and war, while at others the quantifiable effects are more difficult to calculate. Innovations are conceived, material is worked, intentions are manifested, and objects are released into the hands or operation of others. Like the bride-wealth currency described above, I have long been interested in the inherited histories tied up in material itself — the fact that iron is rarely thrown away and is continually reinvested into other forms in the hands of makers, is to me, one of iron’s most important characteristics and provides another layer of interpretation when specific materials are introduced based on the prior life it had led. Most of my sculpture is forged in a factory where 250,000,000 pounds (115000000 kilos) of iron is forged each month, giving me access to massive industrial remnants that I consider “offspring” generated from a “parent” originally manufactured to perform a task out in the world. Like DNA, the chemical composition of iron contained in these fragments “genetically” connects it to the “parent’s” legacy, whatever and wherever that may be.

‘Striking Iron: The Art of African Blacksmiths’ will be on display at the Fowler Museum until December 30. Following its presentation in Los Angeles, the exhibition will travel to the Smithsonian Institution’s National Museum of African Art, Washington, D.C. (February 13—October 20, 2019), and the Musée du Quai Branly-Jacques Chirac, Paris (November 2019–March 2020). 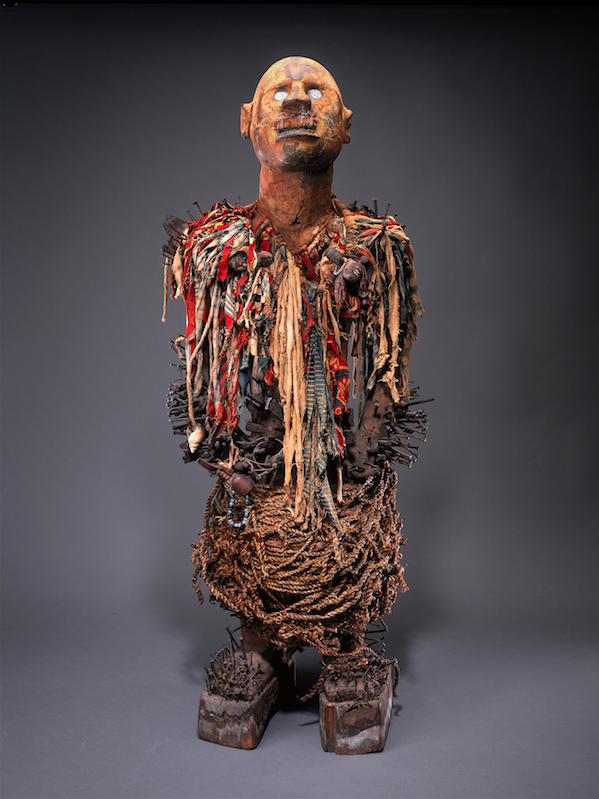 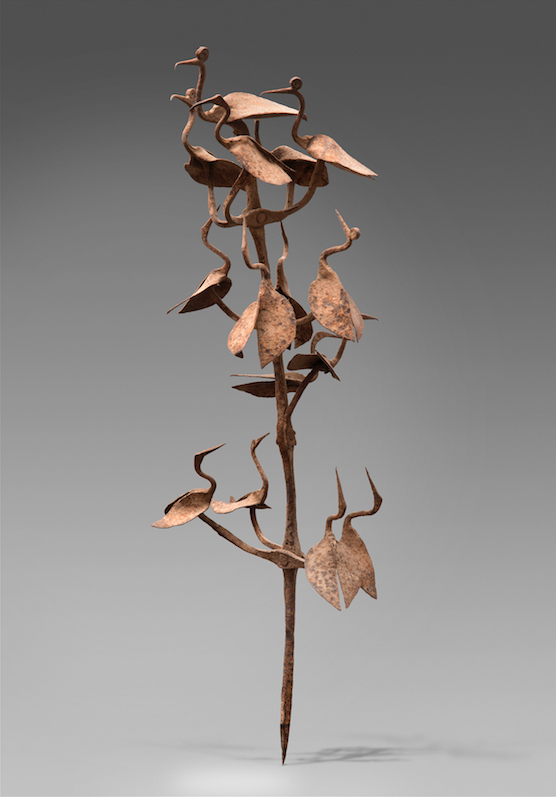 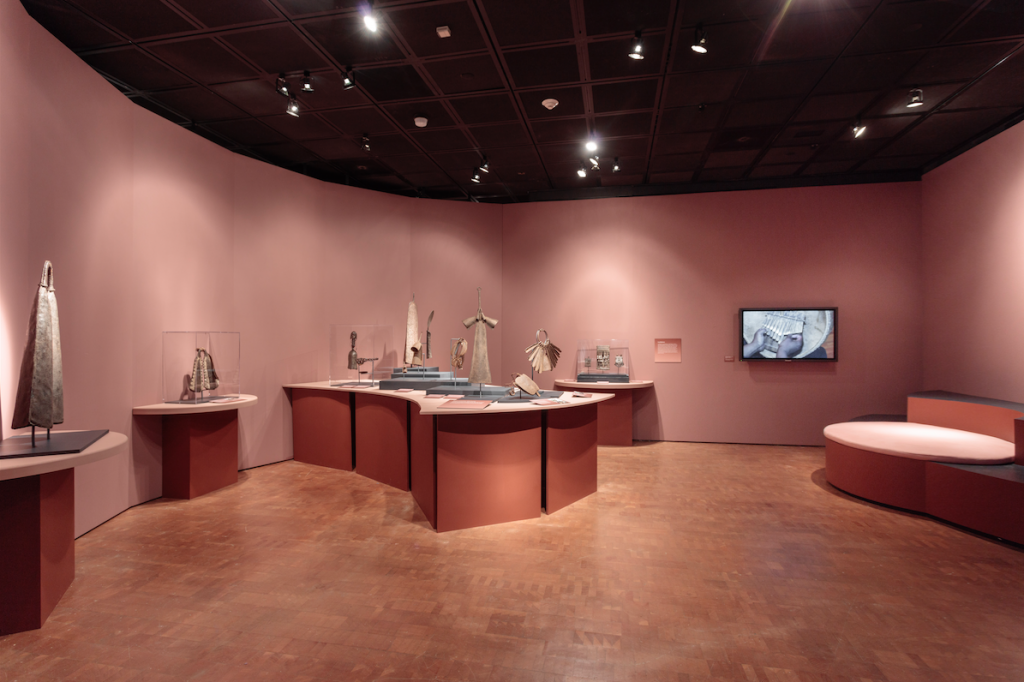 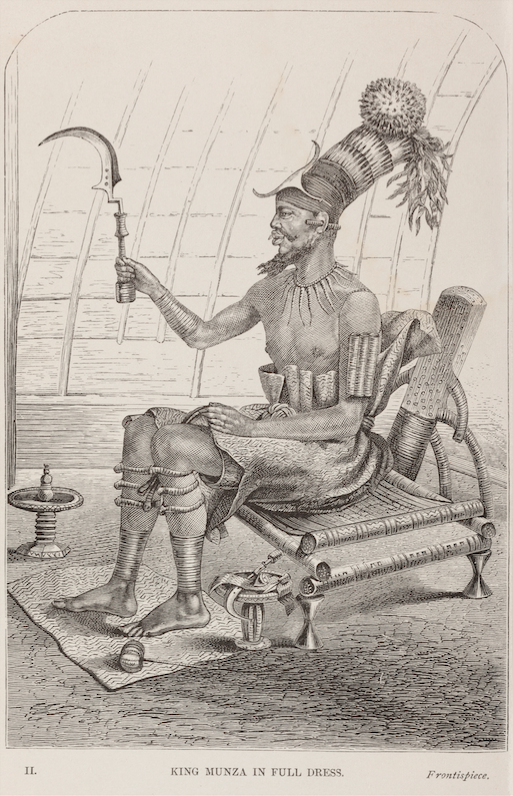 The Mangbetu King Munza at court, 1870, brandishing a prestige scepter and adorned with a multitude of courtly regalia to signify his high status. Engraving by J. D. Cooper, reproduced in Georg Schweinfurth (1874). 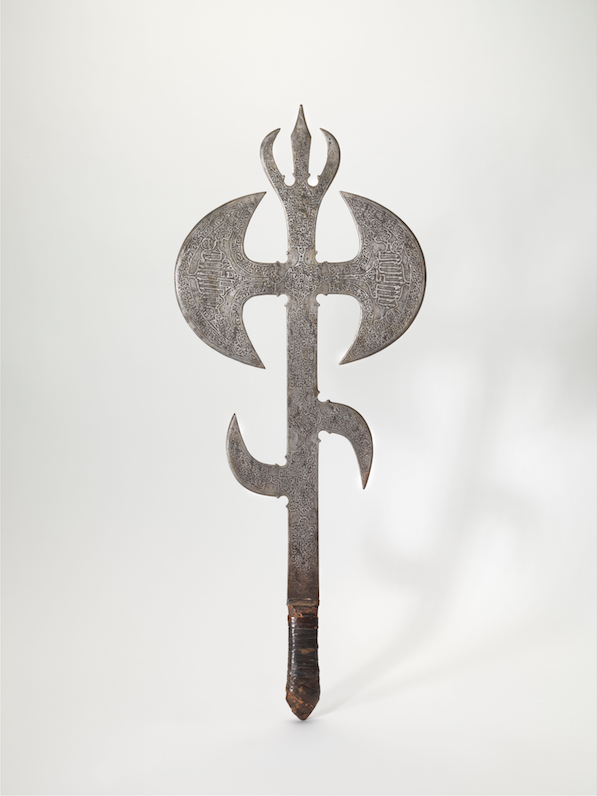 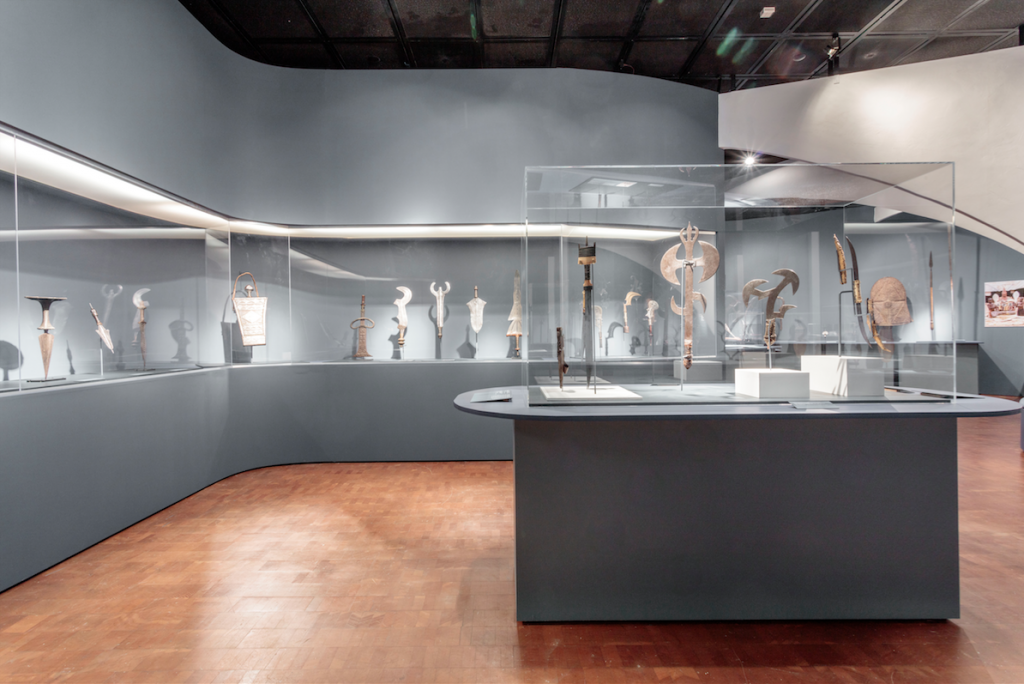 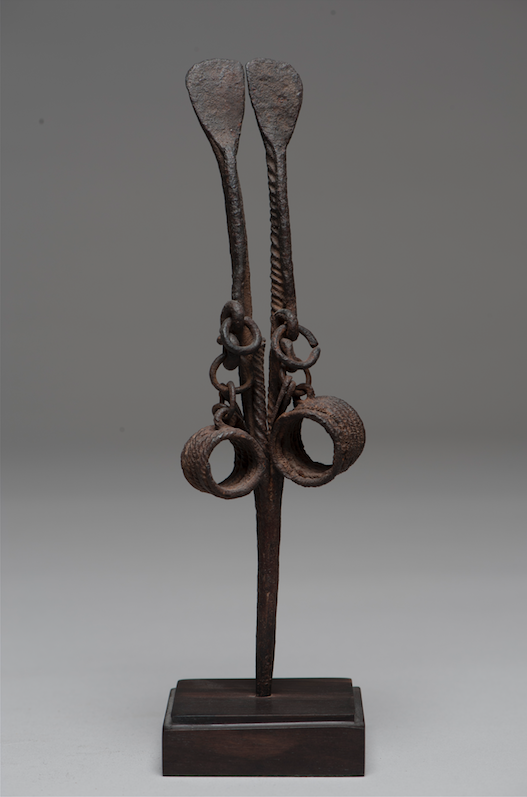 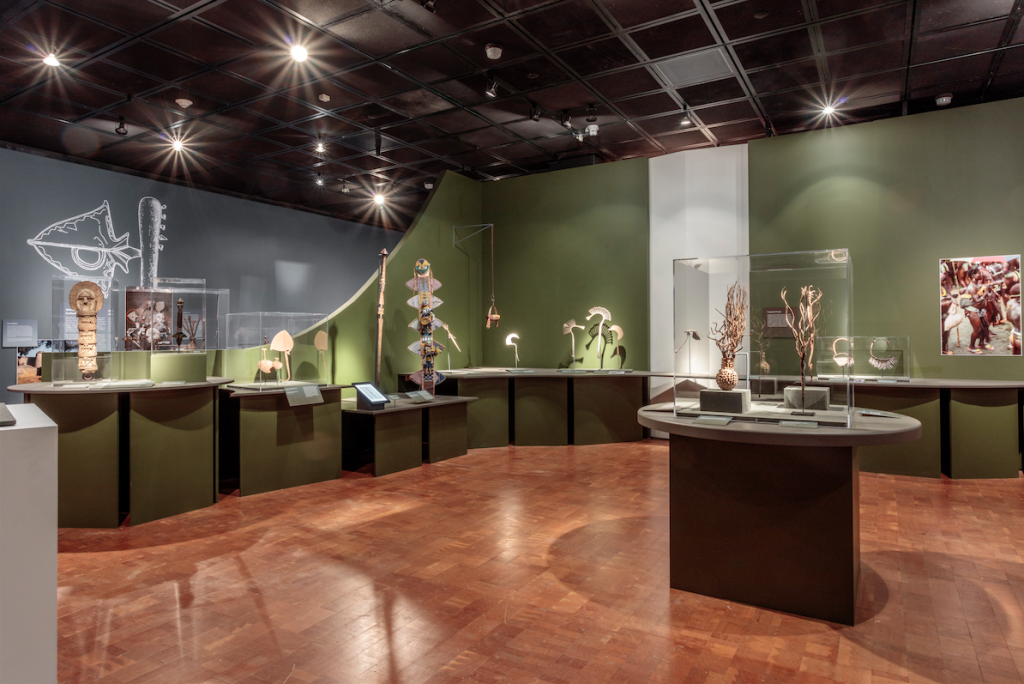