As anyone who has worked in the medium knows, ceramics is a fickle thing. Its mastery comes from a balance between controlled intention and letting go, giving room for imperfection. The creative practice of Lotte Westphael exemplifies the search for this balance. The Danish artist’s work in porcelain is based on a personal immersion in technique, unfolded through a graphic universe. Her delicate vessels are reminiscent of weavings, constructed from tiny slabs of coloured clay. Inspired by Anni Albers, Agnes Martin, and her Nordic heritage, she arranges these slabs with technical precision to form rhythmic patchworks and gradients. TLmag speaks with the artist about her technique, inspiration, and approach.

TLmag: Could you tell me about what path led you to working with ceramics and how your practice developed?

Lotte Westphael (LW): I actually wanted to study mathematics when I was very young. I grew up on a farm in Denmark, and throughout my childhood I was doing crafts. I don’t have the patience for handicraft, really. I think it’s because when I started those things, I could always see how it would look even before it was finished. But with ceramics you never know, until you open the kiln. I think that’s why it’s so exciting to work with clay, and I simply love the material. I studied ceramics throughout school, and eventually decided that I wanted to go to Japan to learn about ceramics there. I stayed in Japan for a year. Later, I applied for further education in ceramics at Designschool Kolding. Now I feel like different threads have connected for me. I find that I think in systems, which is reflected in my approach. In my series I always have something fixed, and something that I change; a constant and a variable.

TLmag: So in your work you allow for some flexibility, but it’s still a kind of intentional flexibility. How did you develop this style?

LW: Inspiration comes from a variety of elements. The technique I am working with now has occurred by playing around with the material. I often use details of small tests in clay – or  even mistakes – and enlarge them. I make something unintentional into something desirable, and then I pursue an idea. The technique I use is very time consuming. It can take one month to make one piece, and another month to dry it. Even after this it can be lost in the firing due to cracks. For me, it’s important to follow an artistic vision. I have been close to giving up on making these really difficult cylinders. But a successful kiln opening makes it worth the effort.

TLmag: The inspiration from Agnes Martin, is it coming into work that you’re producing now or has it inspired work that you’ve already created?

LW: It inspired the ‘Gradients’ series. Agnes Martin worked in grids. I made a solo exhibition in Stockholm named ‘In GRID’ before even knowing about Martin’s work. In the Gradient series I took up the grid as a theme, and in some works the artistic intention was to dissolve the grid into nothingness.

TLmag: Your work seems to have a lot of contradictions in it because you work with weaving patterns, which are flat, and then you transform them into a volumetric surface and something that appears very precise and smooth.

LW: Actually, I am very aware of the tactility and the surface of my pieces. Looking closely, they are not smooth at all because of variable shrinkage in the different porcelain colours. I often see people touching my pieces, as if the surface has to be absorbed with senses other than sight. This pleases me, because I realised that people want to interact with them.

My style has developed in dialogue with the material, and then later with recognition of a connection to other artists’ work. I discovered Anni Albers’ work by chance and I recognised  that it was similar to my own. In ‘On Designing’, there is a chapter called ‘Tactile Sensibility’ where Albers talks about the structural dimension of weaving, which is what I work with in my technique. Some people assume that I’m just painting on the surface. But for me, the construction of the pattern is really important, and the expression is different than that of a painted surface. There’s an intellectual dimension to making the patterns. People often think it’s like weaving, but it’s  actually more like patchwork.

TLmag: I also wanted to ask about naming these vessels ‘Syncopes’. Is that linked directly to this idea of syncopation and rhythm?

LW: Yes, it’s a musical expression that describes a disturbance or interruption of the regular flow of rhythm. I think my work has this small disorder or distortion. It also gives me some freedom for imperfection in my work.

TLmag: And this acceptance of imperfection, has that happened just by virtue of working with ceramics and has taken place over time, or was it a more conscious decision that you made?

LW: In 2014, I had a very interesting meeting with a ceramicist from Australia. We were sharing photos of our works and I was complaining that I couldn’t make my cylinders totally circular. I was really dissatisfied with the inaccuracies of my own work. She asked me a simple question: “But does it matter?”. The imperfections are given to me by the material, and sometimes you can see such things as a gift. I think too much perfection can be a little bit boring. But of course, it’s a balance.

TLmag: Is it in your mind as you’re creating, this balance?

LW: Yes, I think so. In my work inspired by Agnes Martin, I was thinking of perfection in terms of having totally straight lines but also small movements. The reference is the vibrance and sensibility of Agnes Martin’s lines. My work might be finished, but it is also an ongoing investigation. I see each of my vessels as an answer to a question that then leads to another question. For instance, when I saw my vessels in sunlight I saw that the quality of colour completely changed. From this, I made a lot of tests of very soft colours, that had almost no pigment. I thought it was interesting to make vessels where the colour appears almost white, but it wasn’t until a light was shining through that you would discover the hues and vibrancy. The sunlight activated my vessels, and I grabbed this discovery for further development. So even though I’m working with the same shape – the cylinder -, I see that one vessel leads to the next. They always teach me something new.

Lotte Westphael is represented by Galerie Maria Wettergren, and has exhibited at Design Miami-Basel, PAD London and TEFAF Maastricht with the gallery. 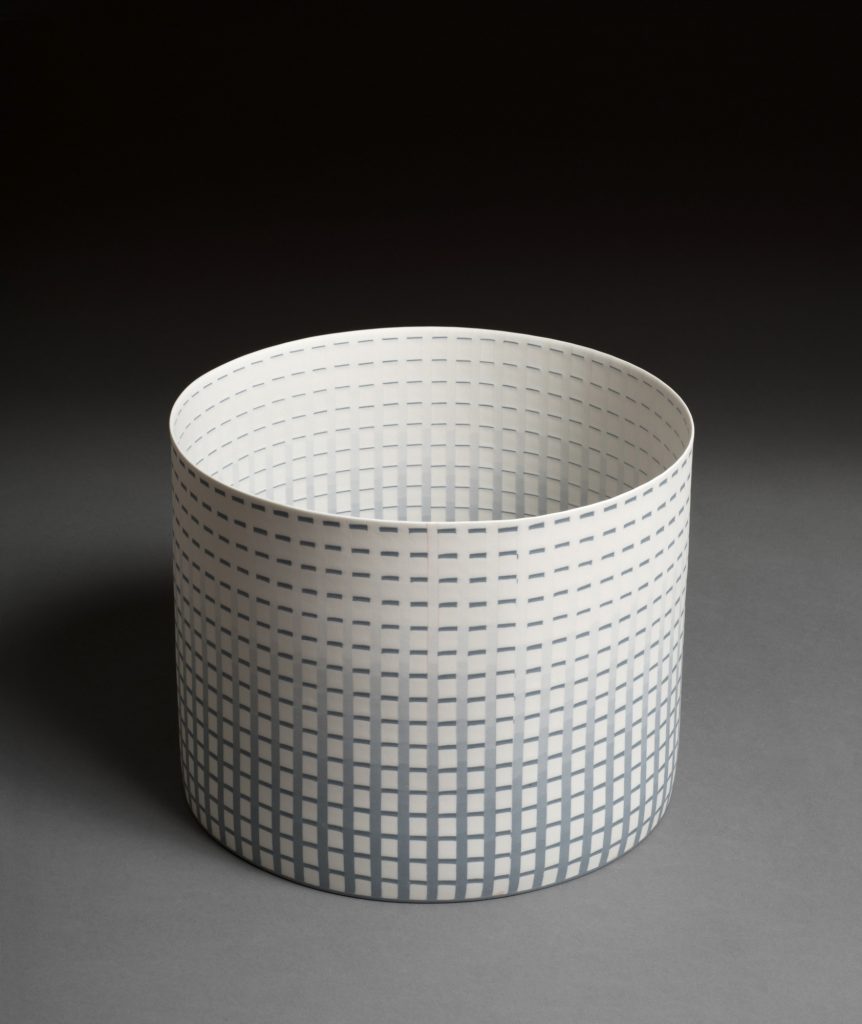 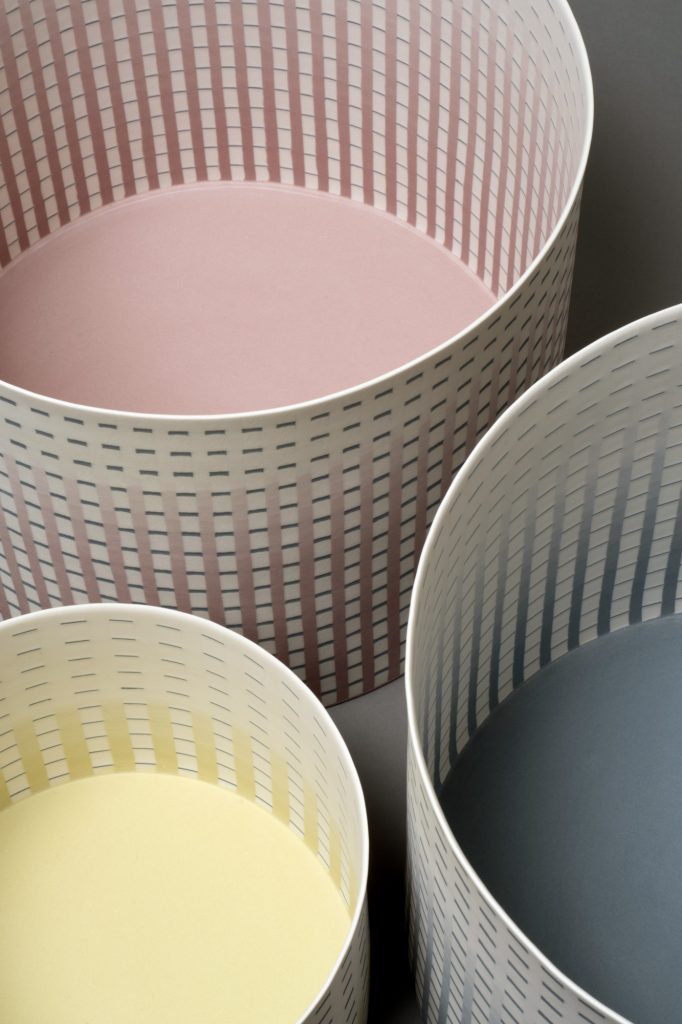 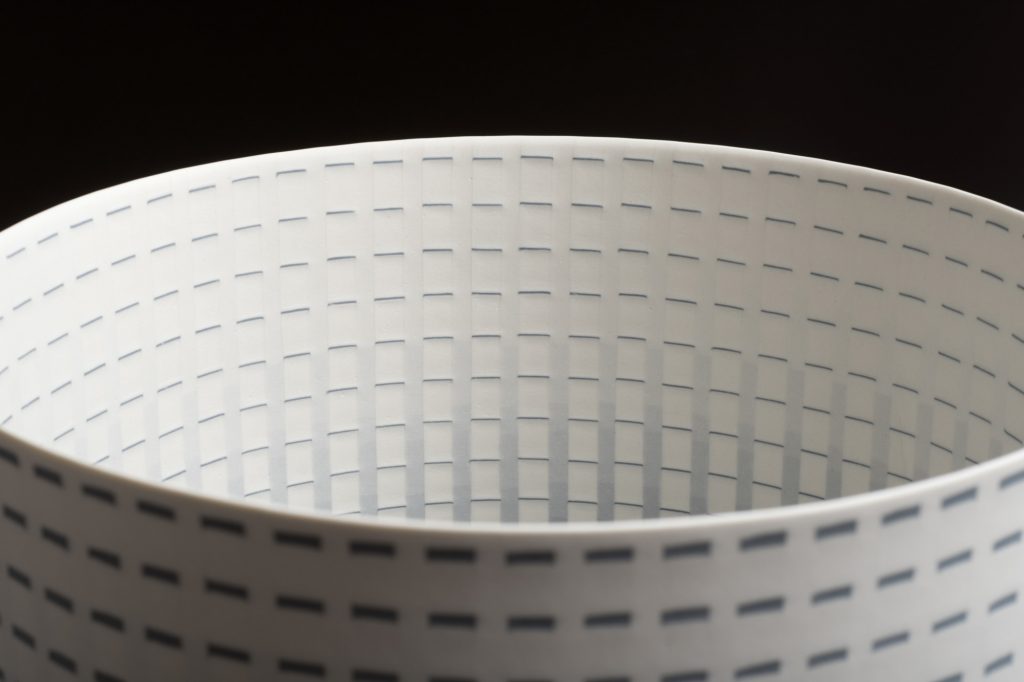 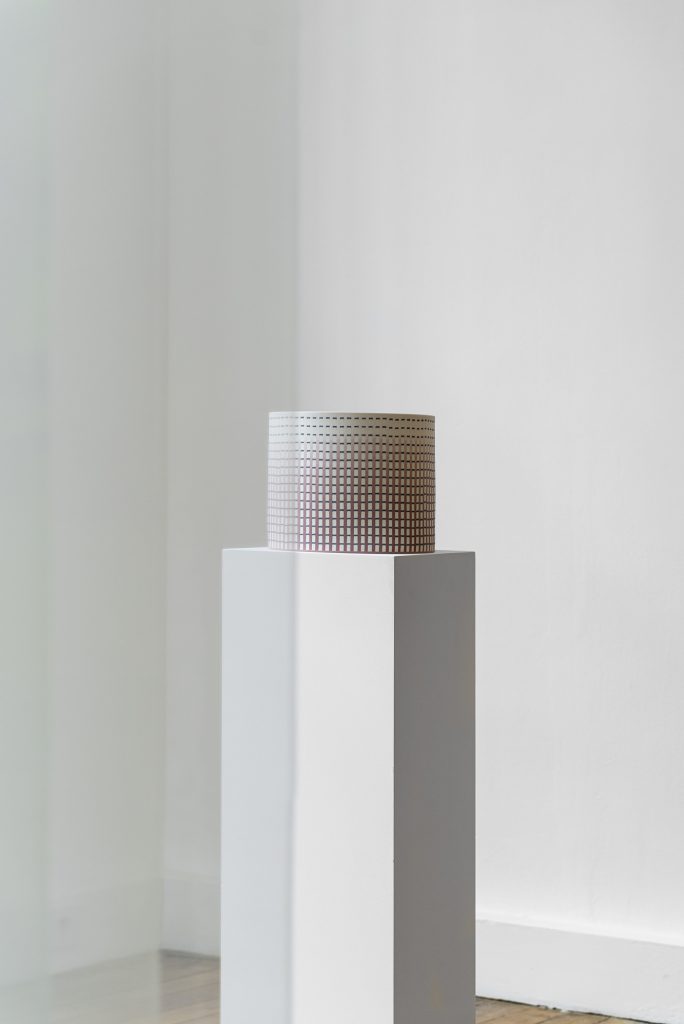 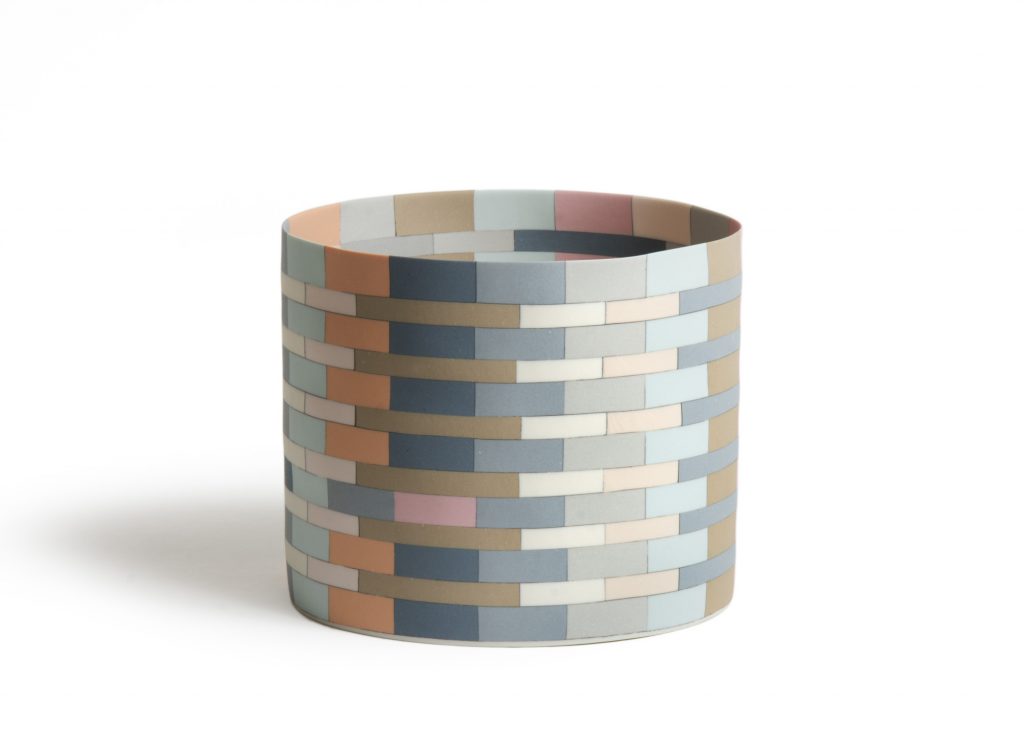 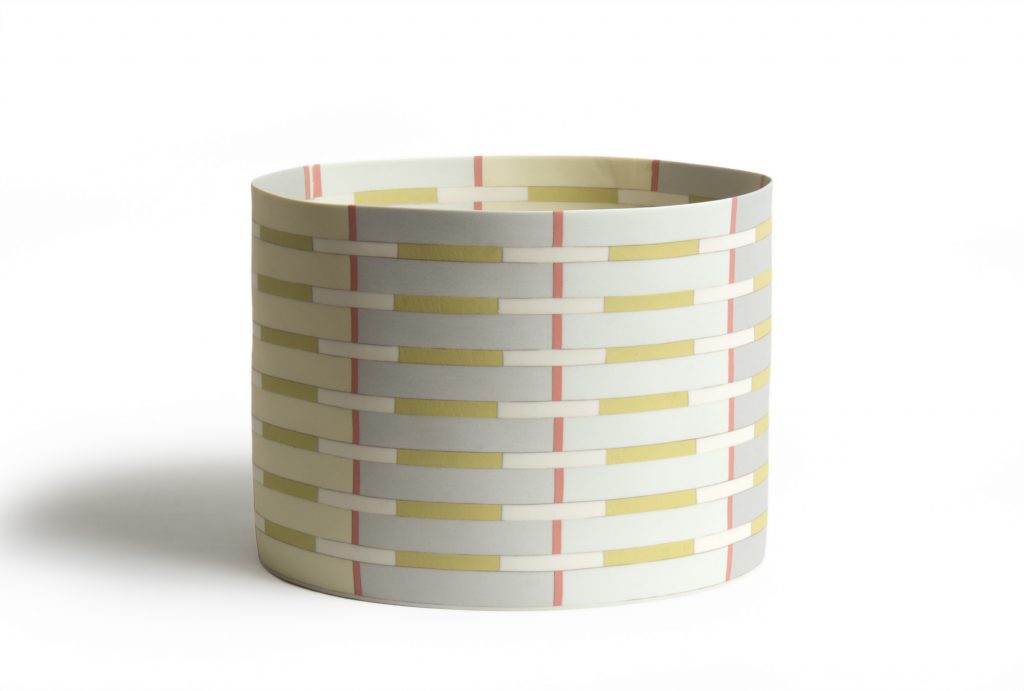 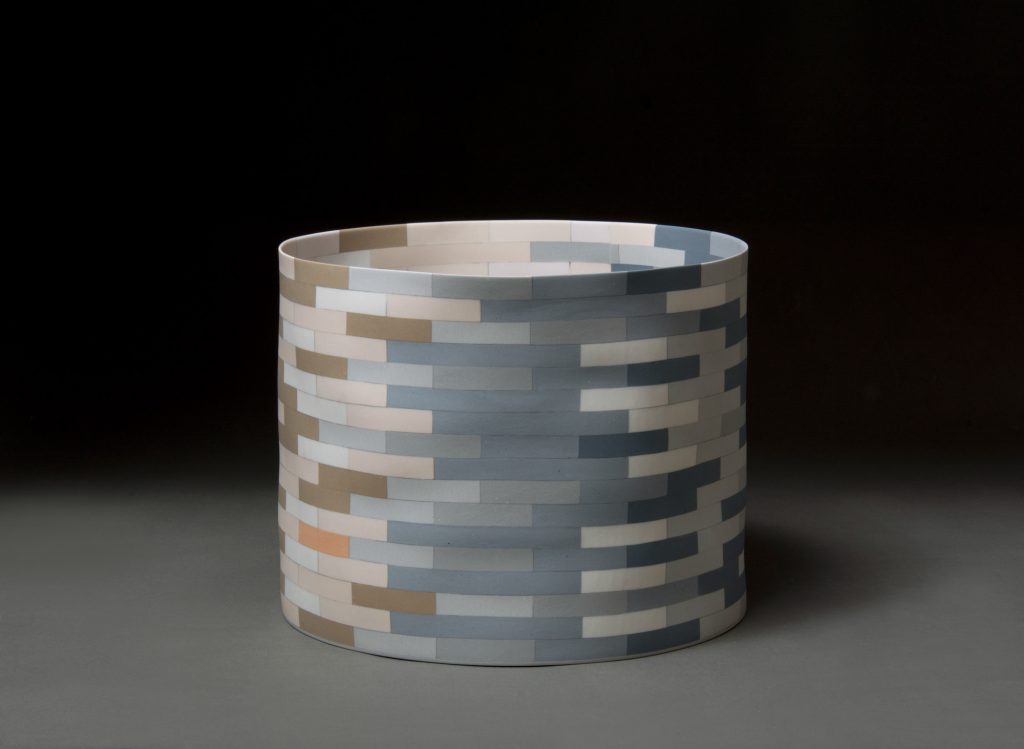 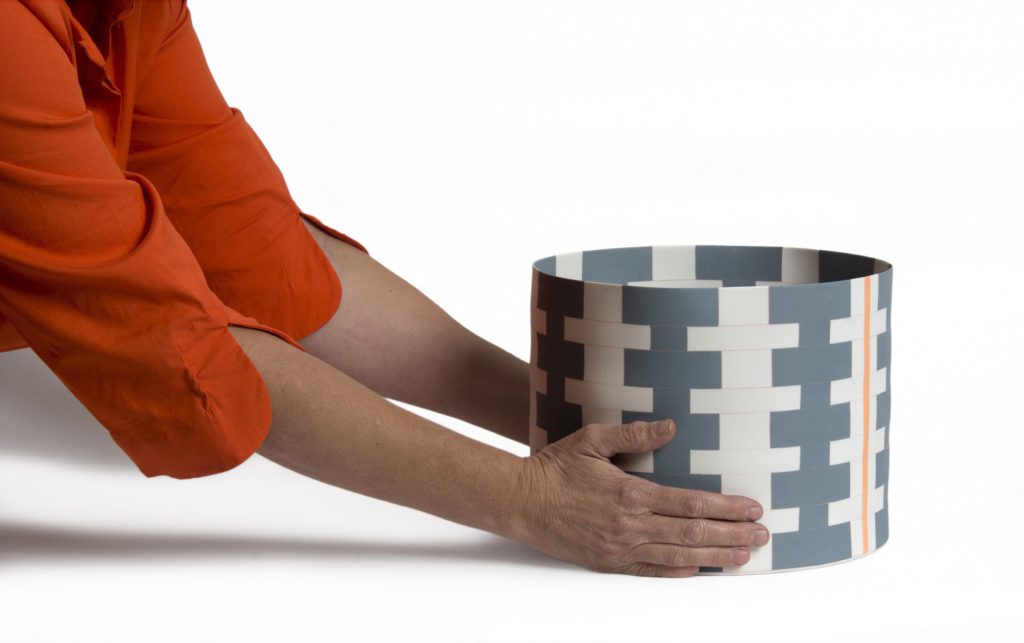 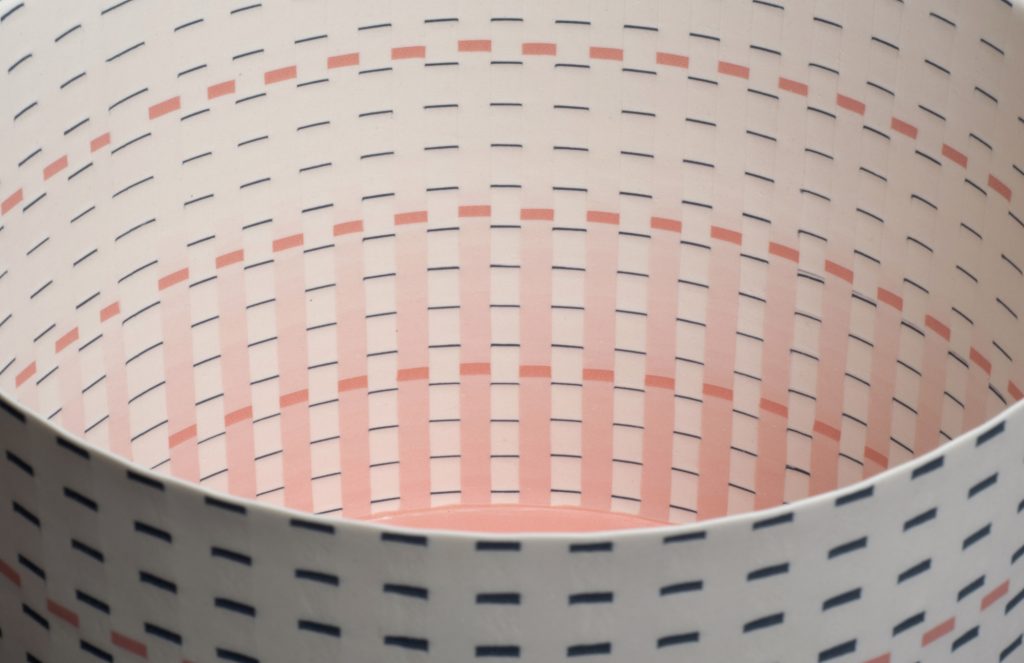 Inside view of Polyrhythm Gradient Rouge, 2020. Photo: Erik Balle.
‹ Back