To Dream and Yearn: The Ephemeral Works of Cecilie Bendixen

TLmag speaks with Danish architect-artist-designer Cecilie Bendixen about her textile-based practice, her atmospheric approach to space and movement, and gathering inspiration from natural phenomena.

“The thing I like the most is to dream and yearn, and my work is carried by dreams and yearning.”

Cecilie Bendixen’s Cloud Formations hangs within the dove grey walls of the National Gallery of Victoria. Lit from within, the translucent textile clouds are suspended by hundreds of tiny threads. Each was created over the course of several months, by a team of sixteen sewers. Surrounded by landscape paintings by Turner, Stanfield, and Constable, and echoing the mushroom cloud form in Jim Shaw’s ‘Capitol Viscera Appliances Mural’, the clouds create a gentle sense of inversion; attention is drawn to the space itself, and interior becomes exterior. This interplay between textile and space is the foundation of the Danish artist’s practice, which spans architecture, weaving, and design.

Like a conscious breath, inhaled and exhaled, Bendixen encourages us to afford the world around us careful attention. Trained as an architect, much of the artist’s practice is drawn from her doctoral thesis, which explored the use of sound-absorbing textiles in interior architecture. The level of crafted detail, with the accompanying investment of time and the tacit consideration of sight and sound within Bendixen’s practice is exceptional. For Bendixen, “the material is the meeting point; the moment of contact between me and space. I see textile as an important material in order to get intimate with space. One of the realisations I had in my PhD studies was that sound absorption is a very spatial phenomenon. Aurally it is experienced as an opening, as the sound disappears into the material. I found it very interesting how these aural and visual impressions can be combined.” For Cloud Formations, the textile clouds themselves echo a kind of landscape painting, but one with an aural effect; “a trompe l’oeil and a trompe l’oreille”. With a light touch, Bendixen loads spaces with movement – both implied and actual – through textile, creating atmosphere even in the absence of sound.

Bendixen’s practice spans a variety of scales, from the delicately threaded Moon Disc ‘Rays From East’, to sculptural installations such as Tentative Spaces. “Usually, I work on quite a small scale, so when things scale up, I need to develop new techniques to construct the three-dimensional textile structures. I also often need to ask somebody to help me. Usually I work alone and in this process the connection between thinking and doing is direct and often not very conscious. But when I work with other people, things have to be formulated, which often – for me, I think – makes things less direct and less felt. I have to consider them very consciously. On the other hand, I very much enjoy the synergy of developing a piece together, and in some big works with many people I love to let the character of each person be present.”

Much of Bendixen’s work draws upon natural phenomena for inspiration. Elemental and ephemeral, many pieces evoke what Bendixen refers to as “memory-feelings”. The artist works with textile to capture and translate familiar sensations, such as the feeling of fabric against skin. “When we see textile waving in the wind and light flickering over the surface according to its movement, we know the tactile feeling of this upon our skin from when we, for example, have worn a long scarf on a windy day and it blows around and we see the sky through it… We have all these sensations as vivid memories in our body.” Such sensory experiences and the subsequent recognition of tactile sensation in Bendixen’s work are used as guidelines in the artist’s explorations of shapes, forms, lines, and light. “Often, I also design the techniques so that their movement is a spatial experience in itself. For example, to make the Sun Discs I move through space as I turn the big disc, making a breeze. I go up and down, and drag the long, shining thread through space.”

“When I work with materials my focus is on the development of techniques to reveal the inherent beauty and constructive properties of them.” This interplay of highly-skilled craft techniques, structure, and construction are constantly juxtaposed with the unpredictable nature of a breeze or a sound. Bendixen’s work sits lightly within space, while still creating an intentional atmosphere. To its audience, it offers presence; an awareness of space itself, of ephemeral and emotive qualities such as light and air and sound – and their absence. The power of these works is in the noticing; the evoking of tactile sensation, the definition of space, the elemental nature, and the sense of infinite lightness that rests within each of Bendixen’s works.

Cloud Formations is on view until April 18, as part of the NGV Triennial at the National Gallery of Victoria, Australia. Cloud Formations has been acquired for the museum’s permanent collection. 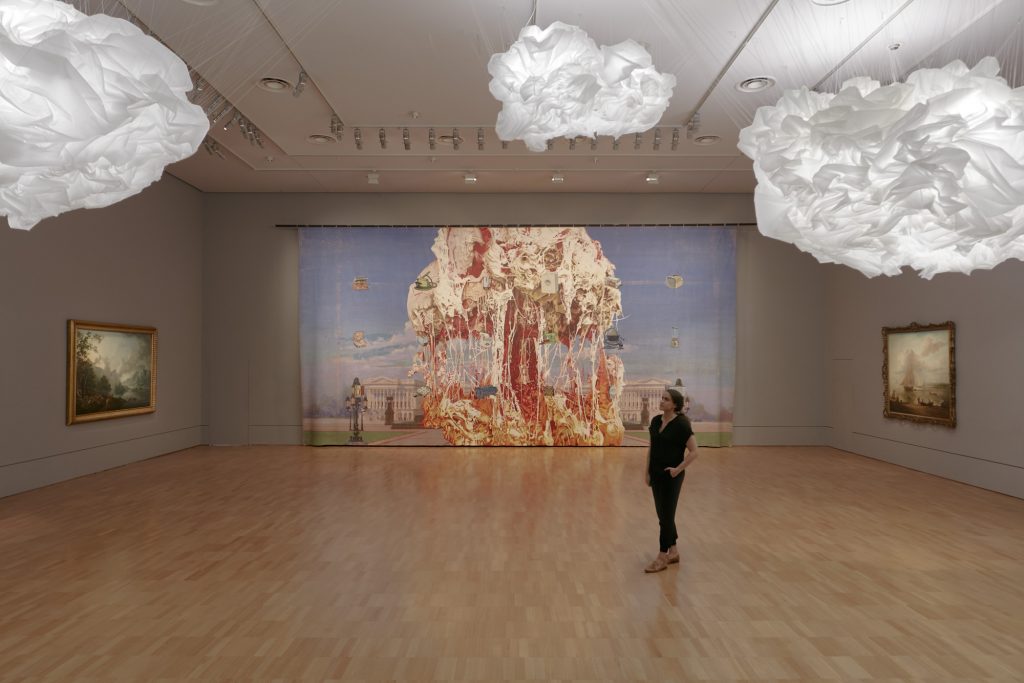 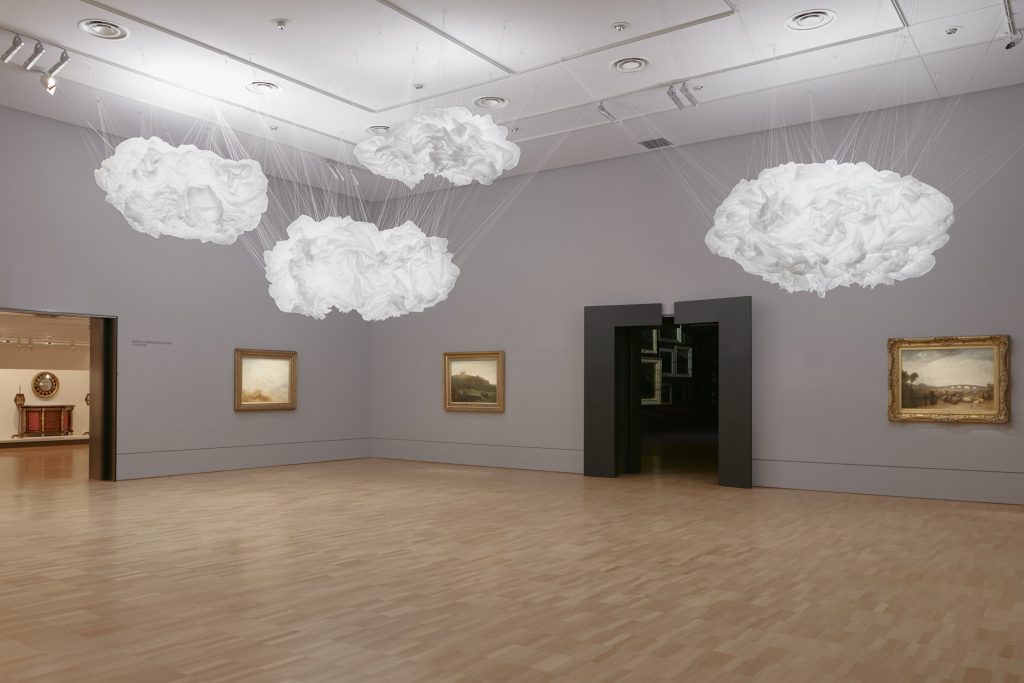 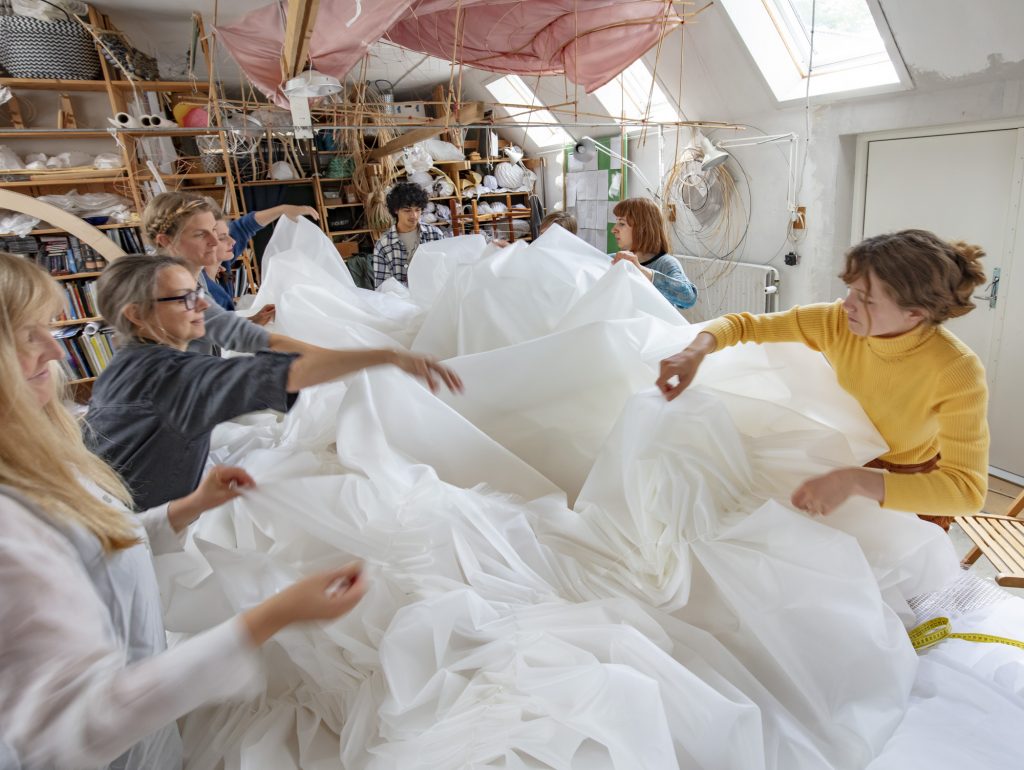 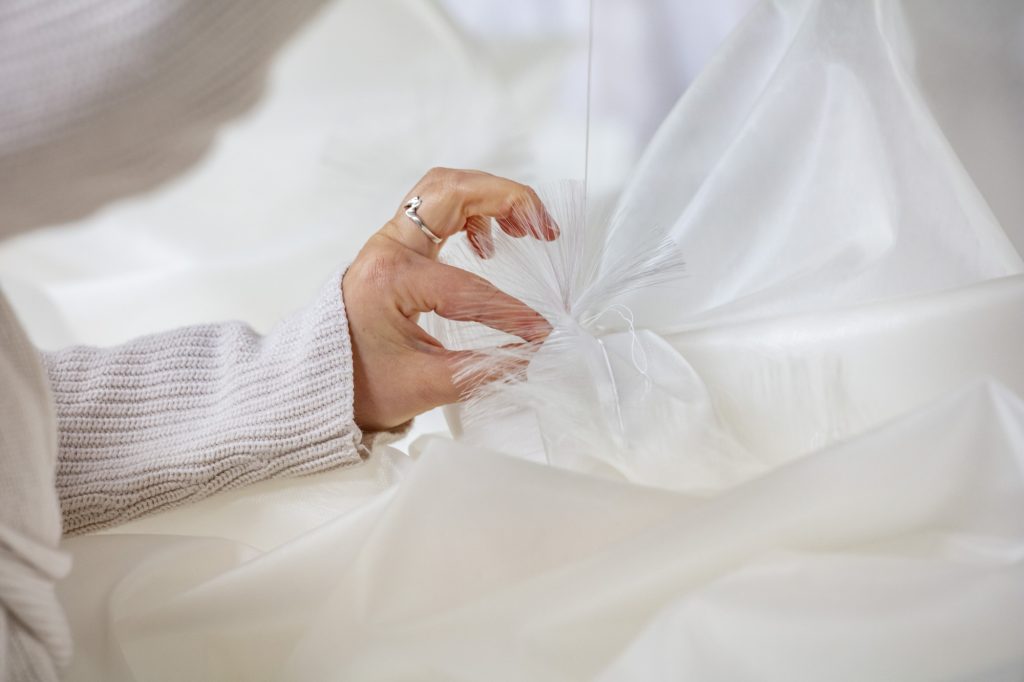 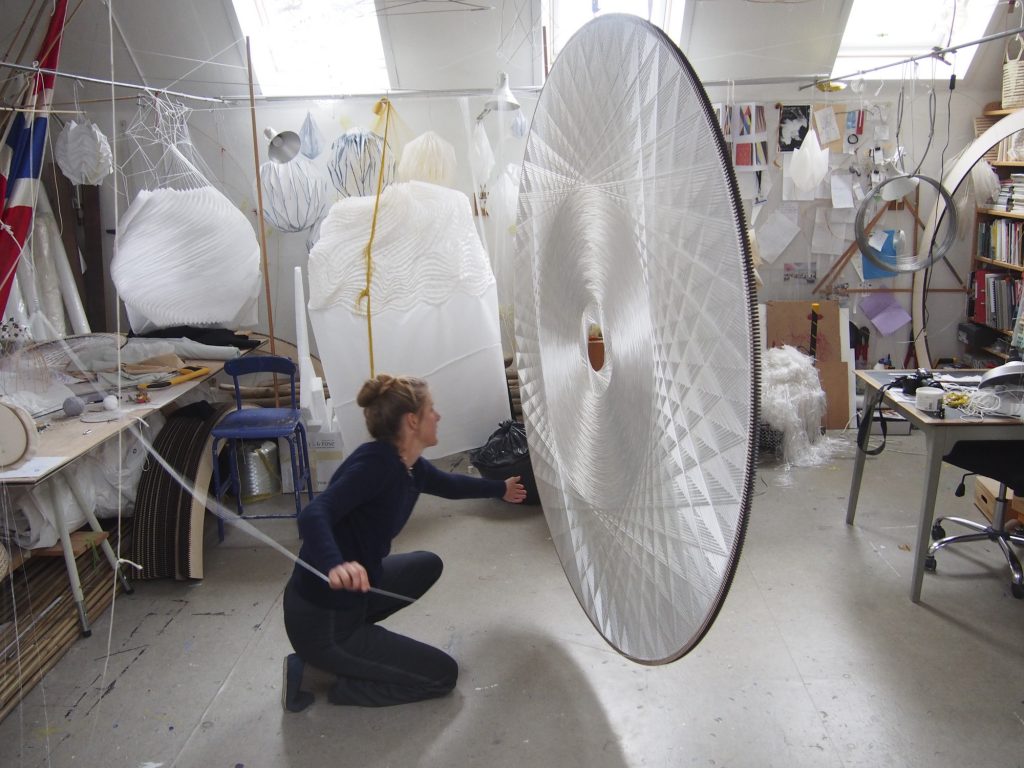 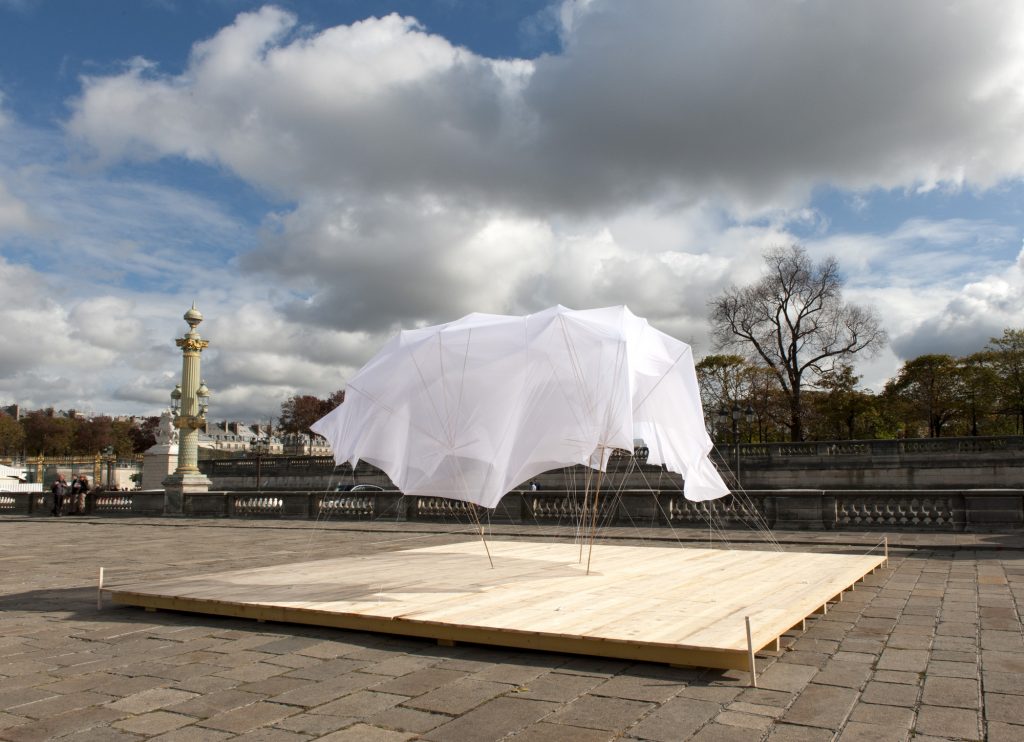 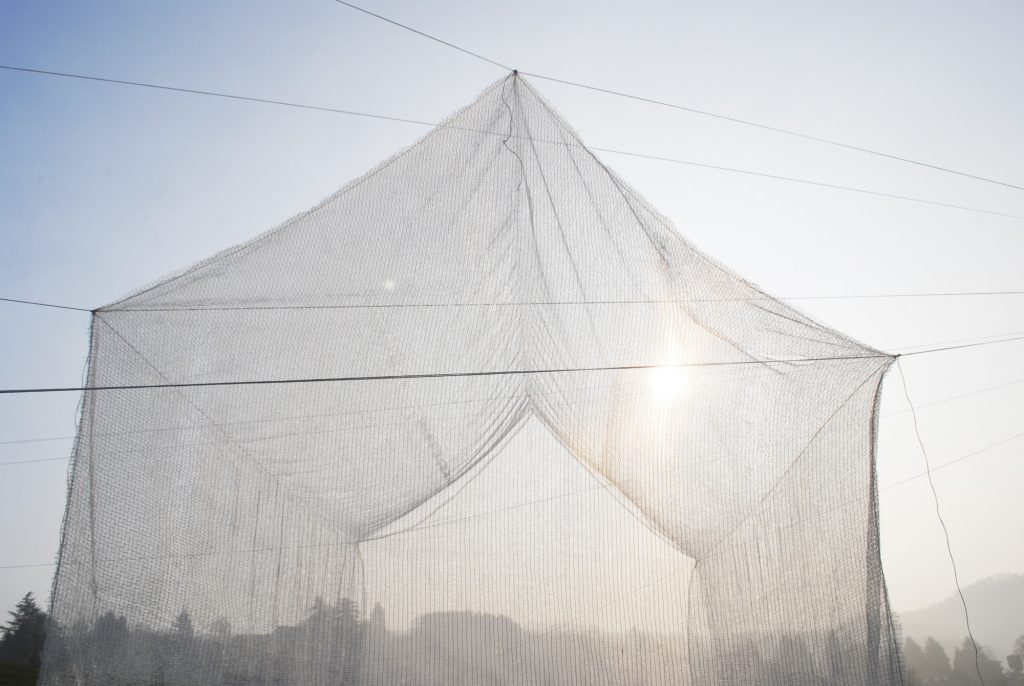 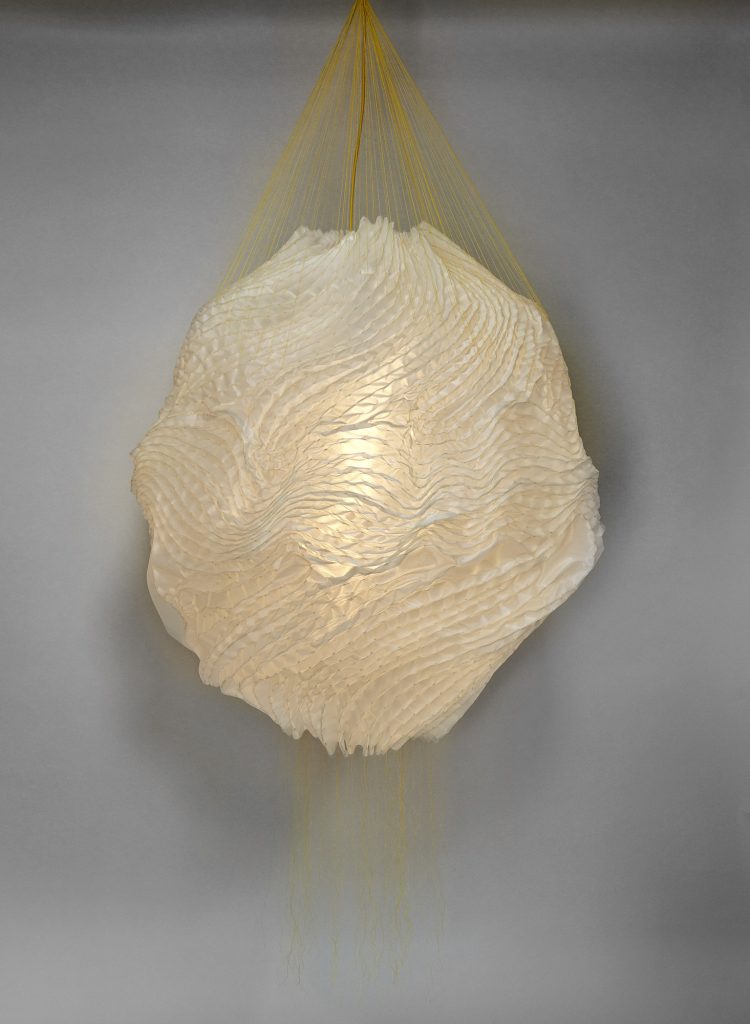