benandsebastian: From Phantom Limbs to the Department of Voids

benandsebastian’s art works interplay between real (arte)facts and fiction, inspired by architecture and the romantic vision of ruins. In TLmag30, Lise Coirier interviews the duo about their practice and fictional installation “The Department of Voids”.

The art works of benandsebastian interplay between real (arte)facts and fiction, inspired by architecture and the romantic vision of ruins. They should not be labelled applied arts or design, even though the result of benandsebastian’s research is revealed through the creation of physical objects. Fascinated by our material culture and the museums’ archives, the Danish duo has created its own frame for questioning human condition. Their exhibition “Phantom Limbs” at the designmuseum in 2011-2013 coupled with their exploration of the conservatory of the Medical Science Museum in Copenhagen have brought them to another fictional installation – “The Department of Voids” –  first shown at Den Frie in 2018. In this installation, benandsebastian questioned the feeling of presence and absence. They physically confront our cognitive and intellectual perception: What do we really feel? What is behind the glass?

TLmagazine: How does your collaboration work? What is the dynamic since you’ve been working as benandsebastian?

benandsebastian: Our work has always been haunted by what we can’t fully express. The haunting takes the form of an endless conversation, circling around the gaps in our thinking. It’s a conversation that we love and that also drives us mad. Either way, we can’t let it drop. Some of the parts of the conversation get written down, drawn out, made into physical objects and installations to be dug up again later. At each stage we misunderstand one another, again and again, but see the misunderstandings as crucial. What emerges in attempting to understand one another seems more interesting to us than our own individual ideas. This discovery happens through misinterpretation, mishearing and frequent frustration. Twelve years on, we are still insisting that it’s worth it, because it’s exactly this dreamy outlining of gaps that fascinates us. As Belle and Sebastian sing: Could you put a name to someone else’s sigh? // Could you put a face to someone else’s eyes? // Is it someone that you’d maybe recognise? // But it all fades into morning when you open your eyes.

TLmag: Have you ever worked or co-created art pieces in connection with archæologists? Would you be keen to get involved in this kind of collaboration?

b&s: Yes, we would and we’ve previously been inspired by forms of experimental archaeology that involve historical re-enactment as a form of embodied research. We’re definitely also interested in the traces, lost or found, that we each leave in material culture. The philosopher Achille Mbembe writes about the vitality of the material remains that we leave behind, and the way in which the archive attempts to organise things to avoid the risk of these remains taking on a life of their own. Our work has allowed us to spend time within the archives of several museums, where this suspended vitality is tangible. One of these was the Medical Museion in Copenhagen, where a bowl that was used for gilding pharmaceutical pills has become part of our work and the basis for a piece that will be soon published in a book called ‘homecomings 1,2,3, etc.’, edited by Cassandra Edlefsen Lasch and Annabelle von Girsewald and published by Archive Books in Berlin. In the early days of modern pharmacology, wealthier patients would have their pills gilded in order to cover their taste and make them look more attractive. The gilded pill would pass through the body undigested, making it available for re-use. One pill could serve whole families, passing through one body into the next. The golden pill is a placebo par excellence; the brilliance of its shell being designed to please, while simultaneously sealing away the pill’s contents and blocking them from having any physiological interaction with the patient’s body – or that of their child, or their grandchild. If archaeology is digging around in ancestral dirt, then this a very literal application of the principle.

TLmag: How would you define yourselves if we were speaking about being today “artists-archæologists”?

B&S: Maybe the best definition would be to give an example. Department of Voids is an evolving work of ours that lies somewhere between fact and fiction. Part of the process has been questioning the way in which we are accustomed to see things when presented under the authority of institutions and experts. In this case, the collection is not of the objects themselves, but of containers for objects that are missing. The collection started with two empty transport cases for objects that had gone missing from a Copenhagen museum’s collection. Only the shell-like containers for the objects remained, with all information about the contents’ identity and provenance having been lost. In its latest iteration, Department of Voids comprises two identical sets of twelve empty transport cases, separated by a glass wall which at first appears to be a mirror. On one side of the wall the cases are empty, accompanied by lists of possible associations, which are written in eight of the most commonly spoken languages in Denmark today. Behind the glass wall the identical cases each hold a complementary glass form that acts as a placeholder for undetermined content. The containers on this side of the wall are accompanied by texts written by directors and specialists from twelve museums in the Copenhagen area, based on their own experiences of missing material and muted histories within their institutional collections. If there is an archaeological quality to our artistic work, it might be in the searching, when several distinct, parallel versions of history appear as real possibilities simultaneously.

B&S: Yes, Galerie Maria Wettergren is our first serious collaboration with an art and design gallery. 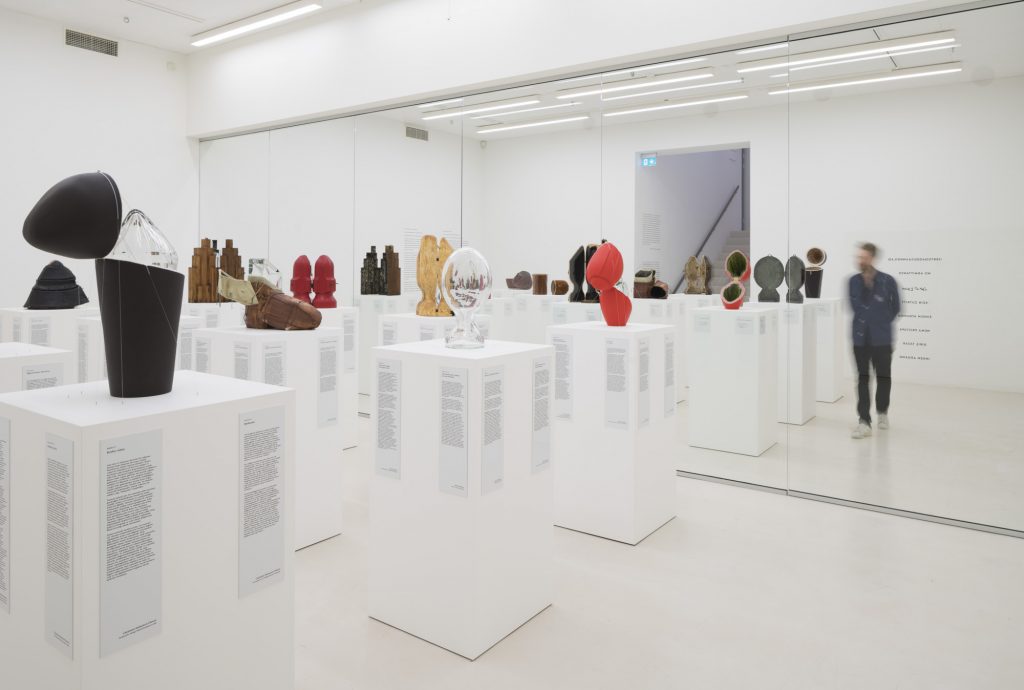 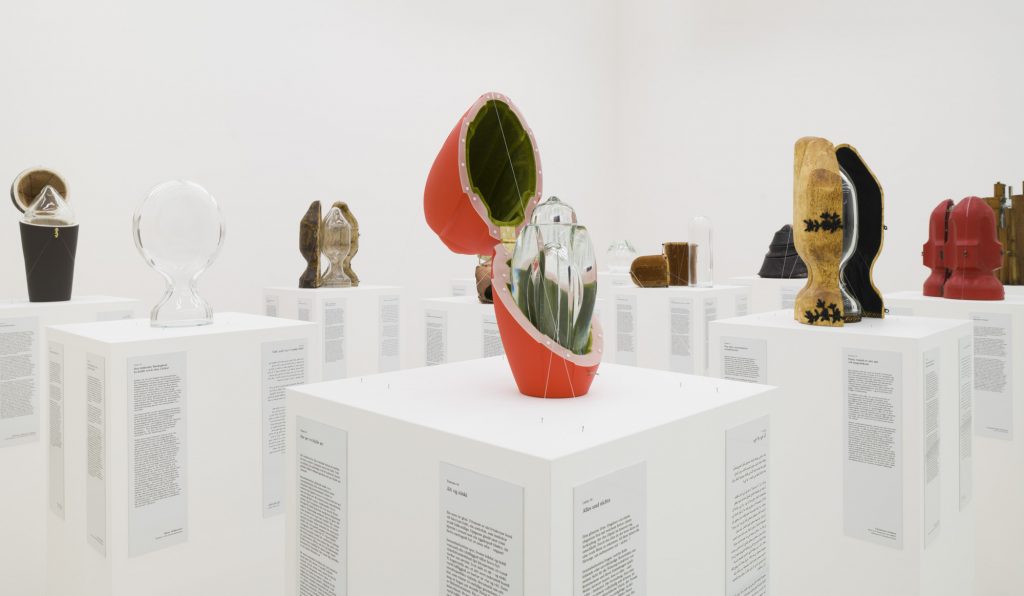 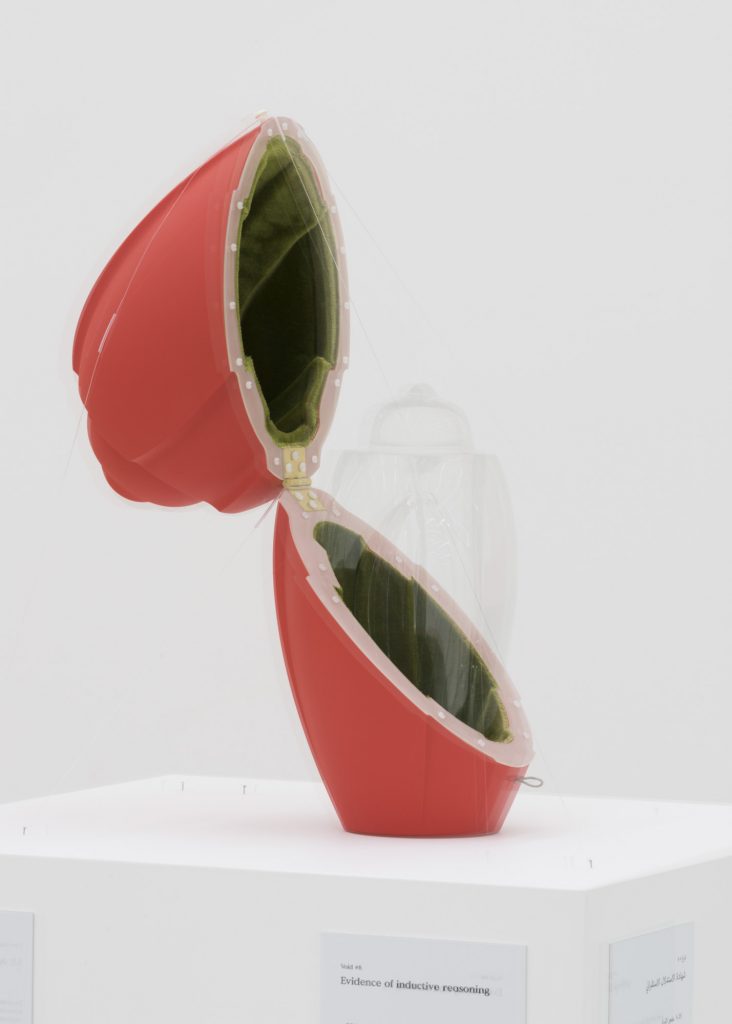 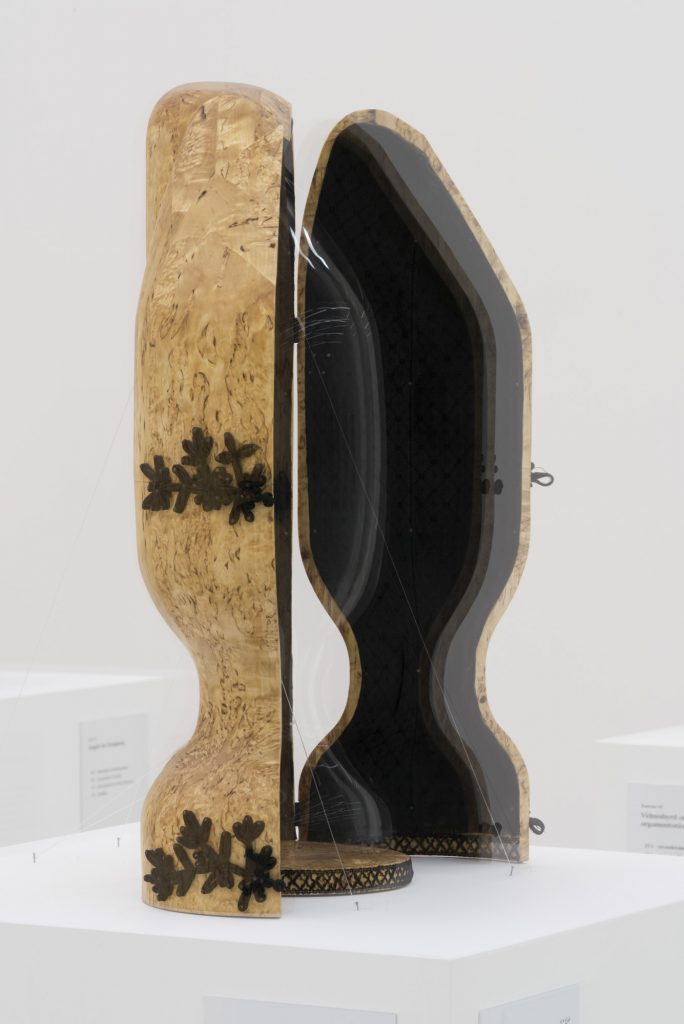 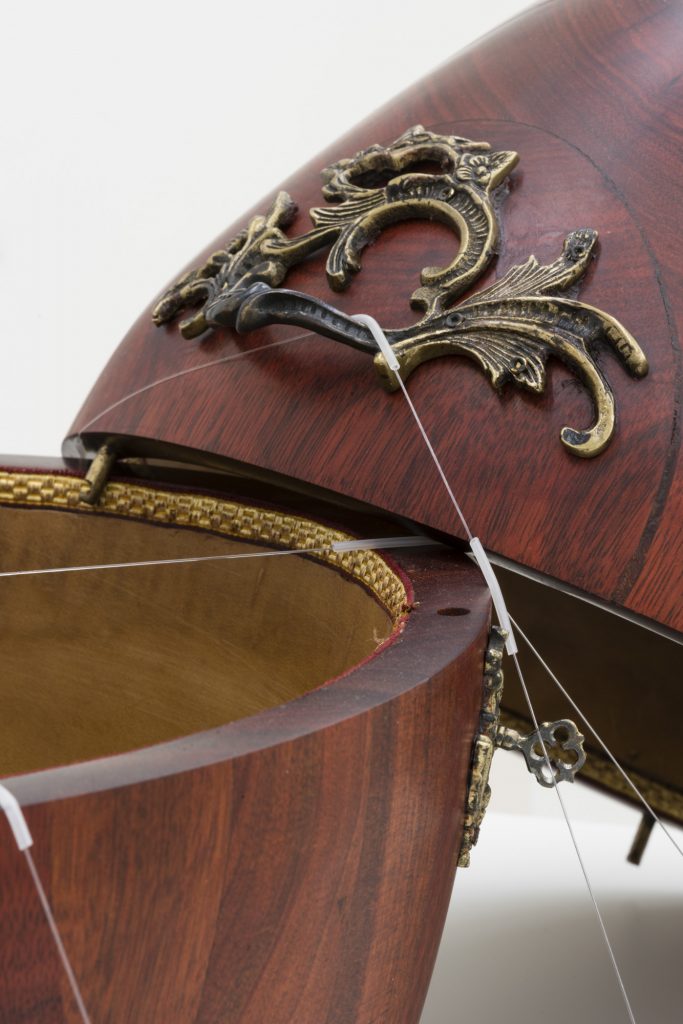 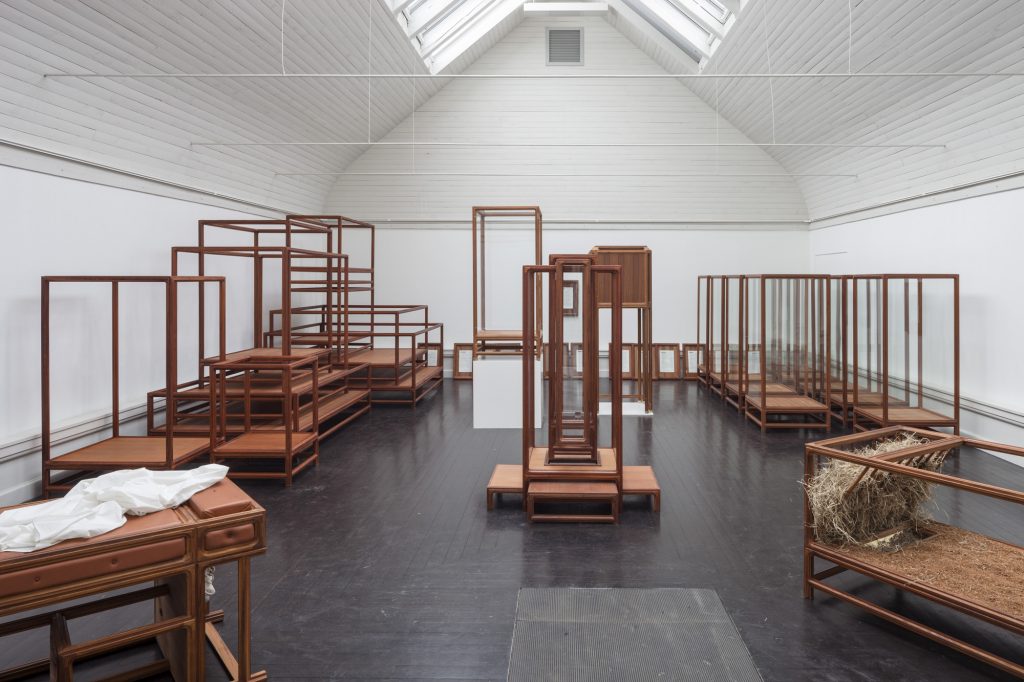 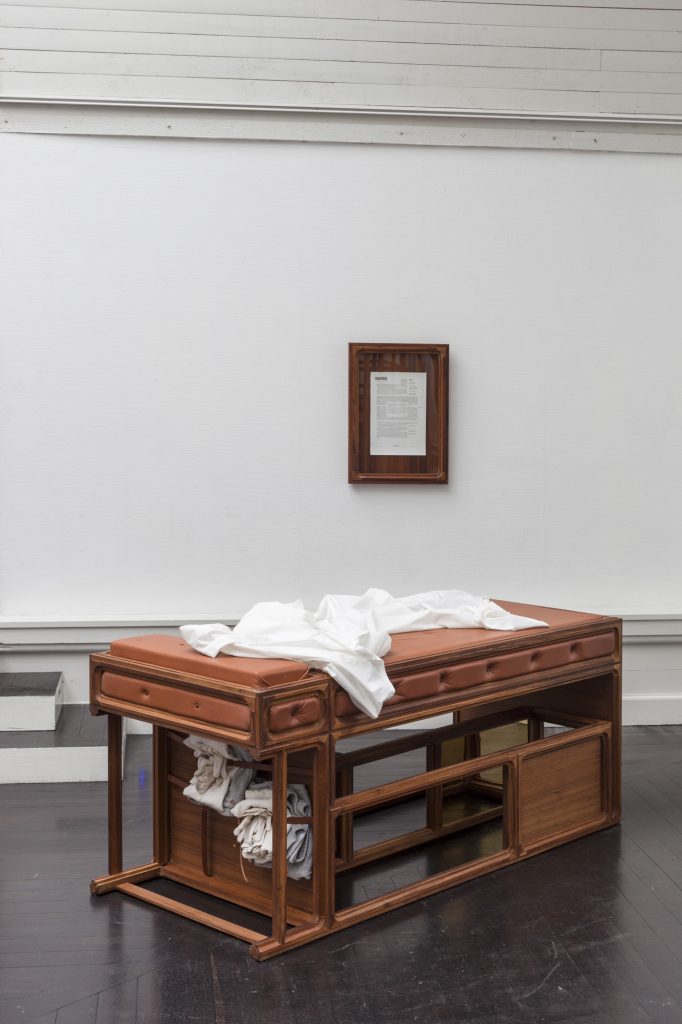 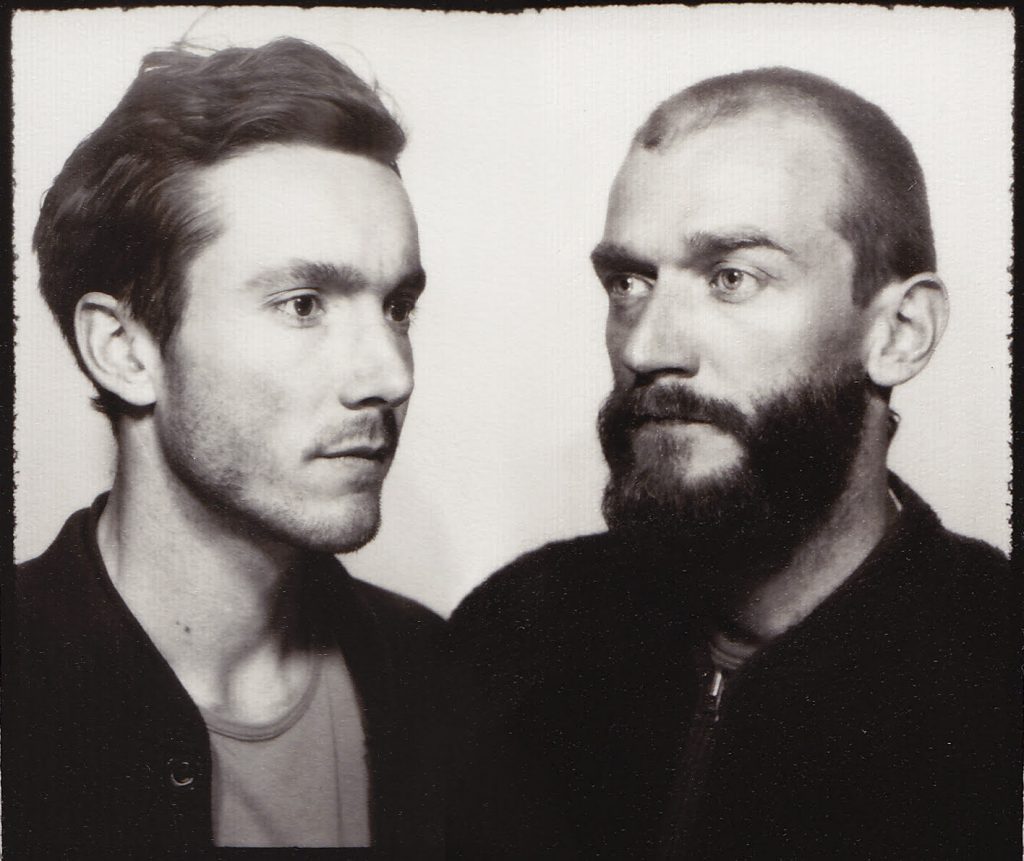 Image courtesy of benandsebastian.
‹ Back