With a process that is intrinsically linked to his transnational identity and a unique dedication for innovation, Nicolas Bellavance-Lecompte’s projects are situated around the globe, much like his own life. Living in both Beirut and Milan, the Canadian designer, architect, curator and advisor has worked on over fifty design exhibitions for private galleries, museums and institutions and, amongst other things, has (co-)founded the first contemporary design gallery in the Middle East (Carwan Gallery), a travelling design fair (NOMAD) and a design studio (Oeuffice). If that wasn’t enough to keep him busy already, Bellavance-Lecompte became the new Art Director of Fonderia Artistica Battaglia’s Design Department earlier this year, leading the foundry’s new residency programme and ushering in a new ideal for its programme. TLmag sat down with Nicolas to talk about his practice, what he’s looking forward to in his new role as art director and his latest show, ‘L’Ultima Cera‘, which links designer Anton Alvarez’s fluid contemporary bronze objects to their religious, historical surroundings.

TLmag: You initially studied architecture and practised as one before making your way through the design world as a curator and consultant. How has your architectural background informed your current practice?

Nicolas-Bellavance-Lecompte (NBL):  Architecture was an excellent formative experience for me. There’s a practicality to architecture, in terms of construction, structure and engineering. The way I structure a project from a vague concept to a “doable” experience comes from my experience as a trained architect. Because it’s between science and culture, you develop logical and technical skills as well as conceptual and critical ones — which are all crucial parts of being a curator. If you work on multiple projects simultaneously, as I do, you also need to be well organised and structured — two things that I also got to develop as an architect.

TLmag: You not only work on projects simultaneously but [according to your website] also work in different roles within them as well. You run Carwan Gallery in Beirut (Lebanon), curate independently and function as a consultant for multiple creative platforms. How do these different “identities” relate to one another?

NBL: Honestly, I don’t know how fluid these labels are, even though I do use them on my website. I guess as titles go, we use them because you need to find the words to be able to communicate what you do. It’s also a way to structure these separate projects for myself and create some sort of clarity. Maybe it’s best to say that my activities are all based in the design field, and are creative in one way or another. I’m particularly interested in creating projects and curating exhibitions — selecting designers, creating concepts and their scenography’s.

TLmag: Over the years, you’ve worked on more than fifty design exhibitions for private galleries, museums and institutions. Do you think your approach has evolved or changed since you first started?

NBL: It might be obvious to say but of course my vision of the world has changed very much over the years — so my approach to curating has as well. Twenty years ago I left Canada, and I had a completely different cultural background and vision of how the world worked, and now I see the world and all of the places where I’ve lived are conditioning my view and directing what I do. Now, I live between Milan and Beirut, and that’s a fundamental part of me and my practice. I think this cultural “contamination” and that metaphorical “baggage” that you get by travelling and doing research always leads to adding another element to that specific cloud of knowledge that each individual carries with them. You understand the world better the more you experience it and that’s definitely the case for me.

TLmag: Earlier this year you became the new Art Director of Fonderia Artistica Battaglia’s Design Department. What are you most looking forward to in this new role?

NBL: My mission is to research and propose two designers per year that are to be involved in new projects produced by the Fonderia. I want to work with designers who have never worked with bronze before and push them to new limits, just as a push the Fonderia. In the residency, they can reinvent the production process and/or explore it from a different artistic perspective that has never really been explored before by the bronze foundry in the past. What I’m really trying to do in the long run is to build a new kind of archive for the Fonderia, one that isn’t only interesting in terms of the history of design but from a global perspective. I want to show what makes the Fonderia an exceptional foundry by pushing their production limit to new challenges and opening them up to engaging cultural dialogues.

TLmag: Anton Alvarez is the first resident of your direction in Fonderia Artistica Battaglia. How did it go?

NBL: This first residency was a very hands-on process — a bit too much at times (laughs). It was the launch of the programme so I had to understand the different aspects of it as we were producing, and I had to adapt to these new surroundings and new people I was working with. The results speak for themselves though; they’re spectacular. When Anton brought his Extrudor, which is this large metal cylinder that hangs from the ceiling to the foundry all of the workers looked at him and the machine with mouths wide open — and watching him work was unbelievable. The device uses an electric motor to exert more than six thousand pounds of pressure on wax, as it pushes it through different moulds and shapes. The wax then flowing into a large cold swimming pool and towards his hands while he guides the extrusion and adjusts it to its final form. It was extraordinarily scenographic, and all employees were coming around and watching him work because they couldn’t believe that somebody was creating work directly with wax in their factory. I love this kind of innovation, and it’s definitely the direction I want to give to the foundry, it would not be easy to follow up either with the technical innovation that Anton brought with him, but as I said I’m also hoping for artistic innovation and strategy to make this residency a very special one in Milan.

NBL:  Actually, I found out that the space is even older than that right when we were started building up! The church is from the twelfth century, and the smaller chapels around it are from the fifteenth. Still, quite amazing that they’re still standing, and that we were allowed to exhibit here.

TLmag: That’s quite special indeed. I was wondering how you came about this space, as it’s the first time it’s become open for public viewing.

NBL: It started when 5 vie Art + Design, a non-profit cultural association which aims to drawing attention to Milan’s Old Town, asked me to create a show for them for Milan Design Week. I’ve curated their show for the last three years in a row, so I told them I’d do it if they could find me a new location to present the exhibition. I knew from the very beginning that I wanted to work with Anton with Fonderia Artistica Battaglia, and I wanted to have a location that nobody has seen in Milan before. It had to be something exciting and be a discovery — even for Milanese people. There was something very special about it because it had a garden, and it’s almost ritualistic when you walk inside. The simplicity of the church itself is also quite remarkable and made it an exciting canvas for Anton’s work. Then, when I saw the interior, Anton and I were convinced that it was the right place for his work.

TLmag: How did the concept for a contemporary design exhibition like ‘L’Ultima Cera’, evolve from this historical context?

NBL: I think the process came about quite organically and naturally actually. In a brainstorm for the concept of the show, we were very much interested in having the show called ‘L’Ultima Cera’ which means ‘The Last Wax’ in Italian. It’s not only a reference to how the works are created but also a play on words on ‘The Last Supper’ — as it’s located a few meters from this church. We also realised that 12 works were going to be presented at the exhibition, just like there are 12 apostles in ‘The Last Supper’. Because of the way they were created, each object is unique — and has its own personality, and the way they interacted with each other was interesting to work with. Of course, these are very abstract and somewhat ironic similarities that we’ve thought of, but they created a discussion between the objects and the church in which they were exhibited.

The larger pieces also remind me of renaissance sculpture for some reason, in an extremely contemporary way. They almost remind me of Bernini’s architecture, like the interiors of St. Peters Church in Rome or the ‘Veiled Christ’ sculpture made of marble in the church in Naples, which inhabits this idea of fluidity and movement within such a strong material. I think that many interpretations arise from his work that are extremely rich and can be very interesting — especially in relation to this space.

TLmag: Anton was the first resident of Fonderia Artistica Battaglia’s new residency programme — do you already know who the next resident is going to be?

NBL: I do, but you’re not allowed to know yet! It’s a secret until next month. I can only tell you that it’s somebody from America and that I’m looking forward to how they are going to shift the foundry’s boundaries even further. 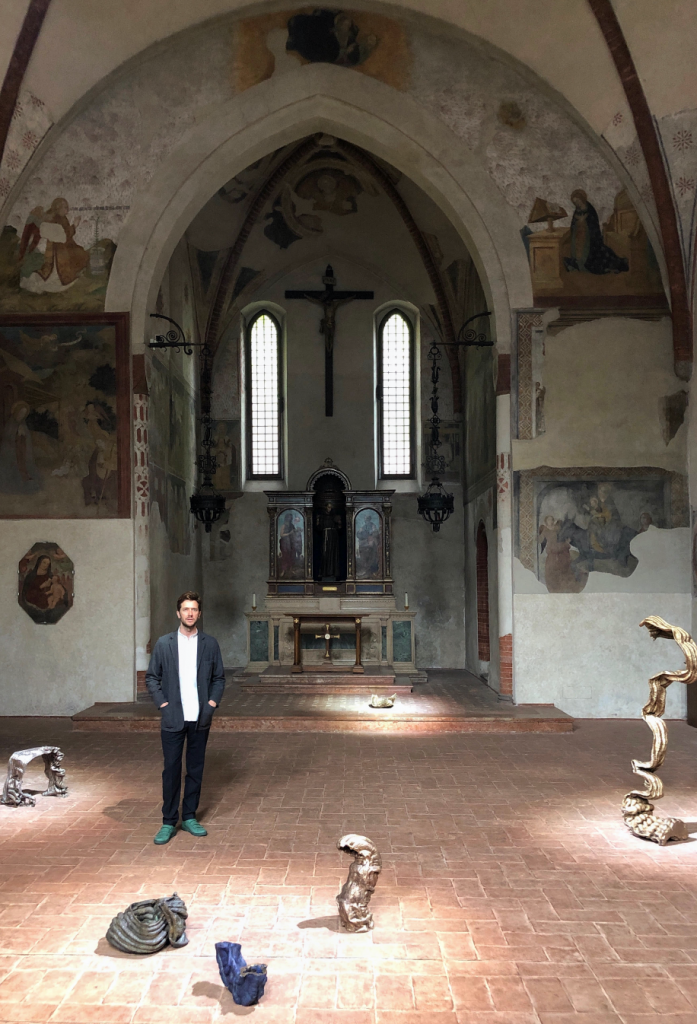 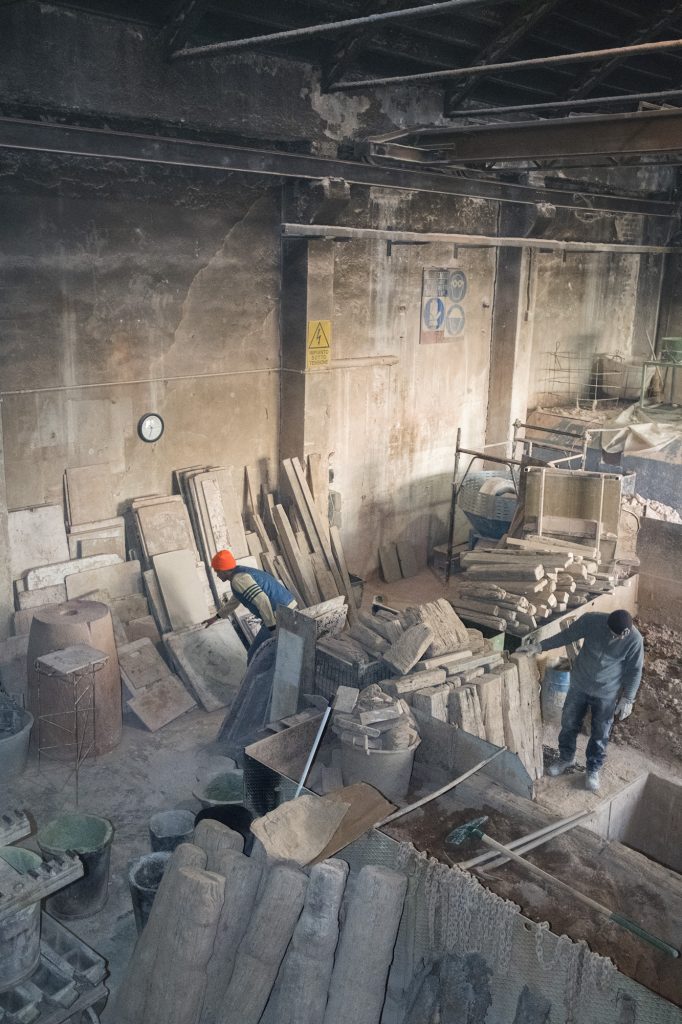 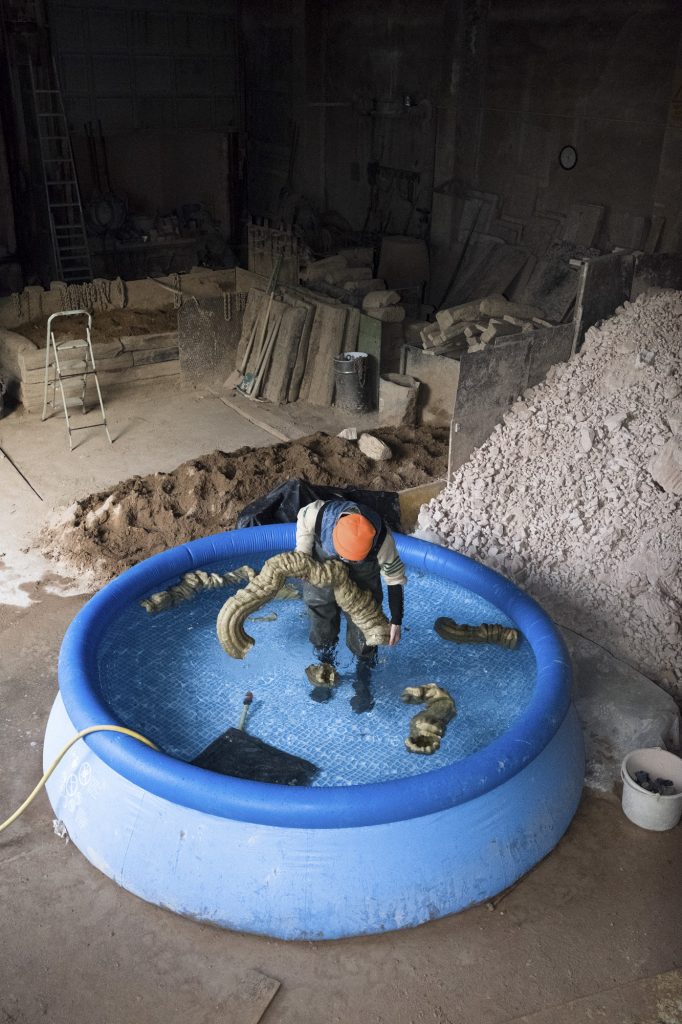 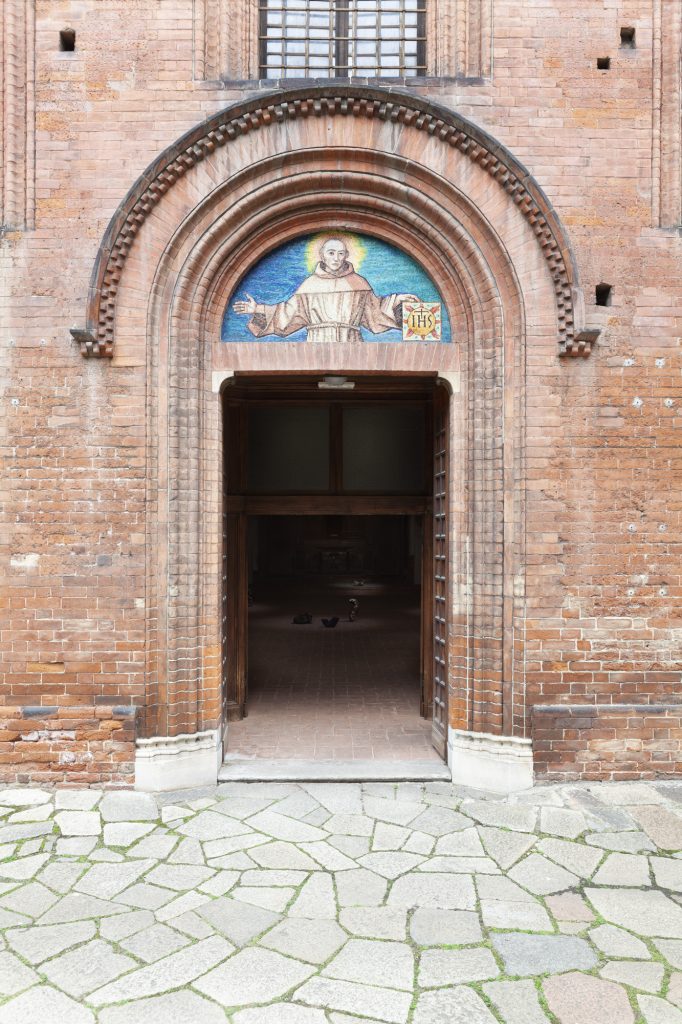 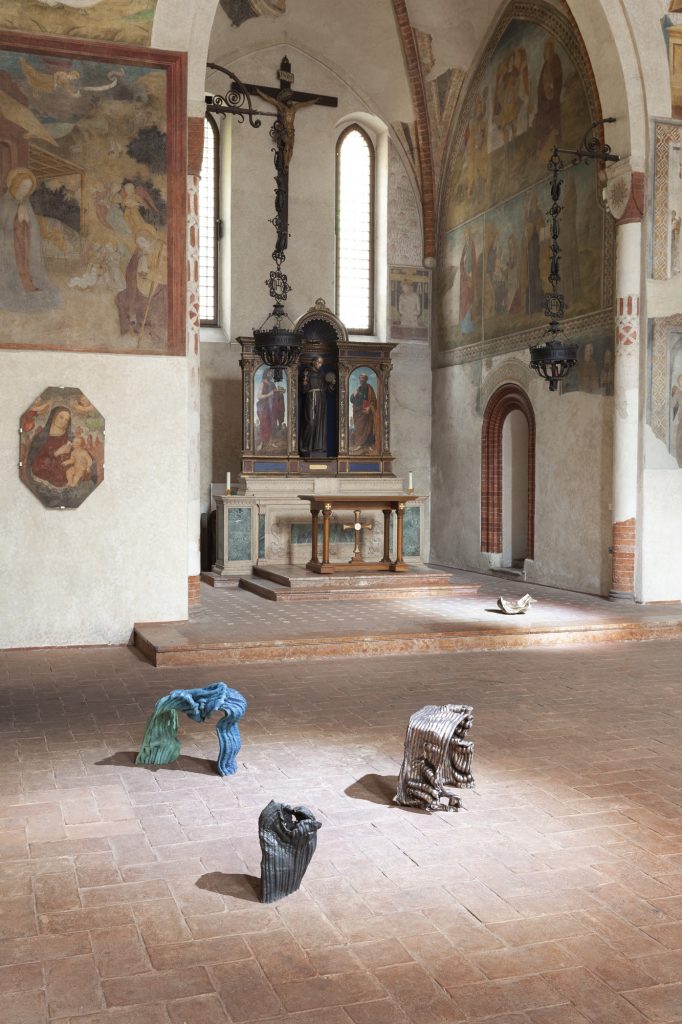 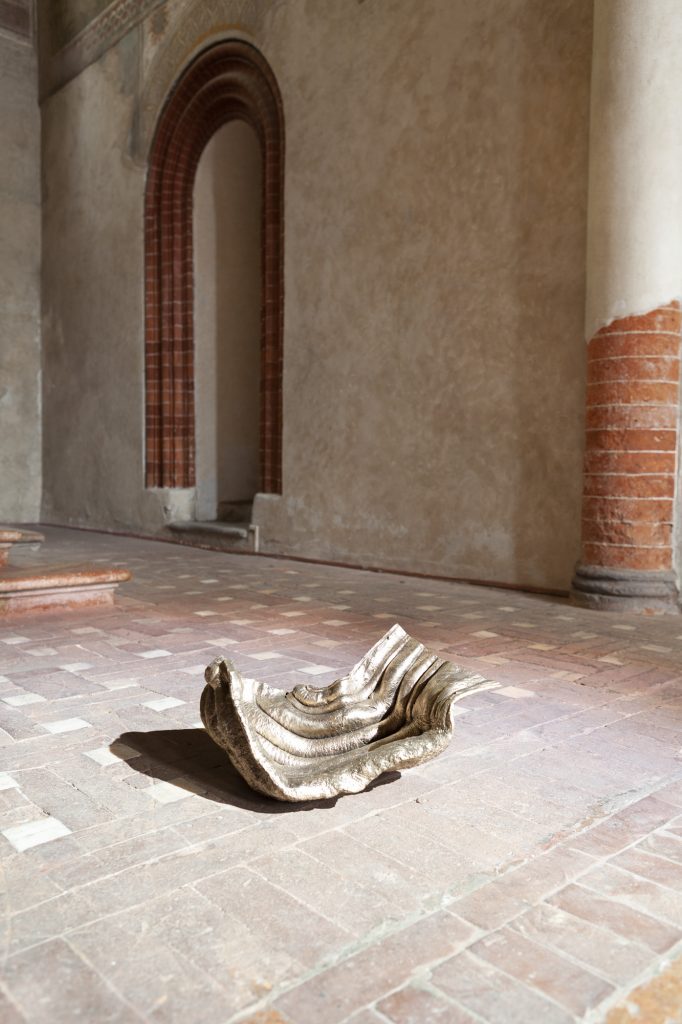 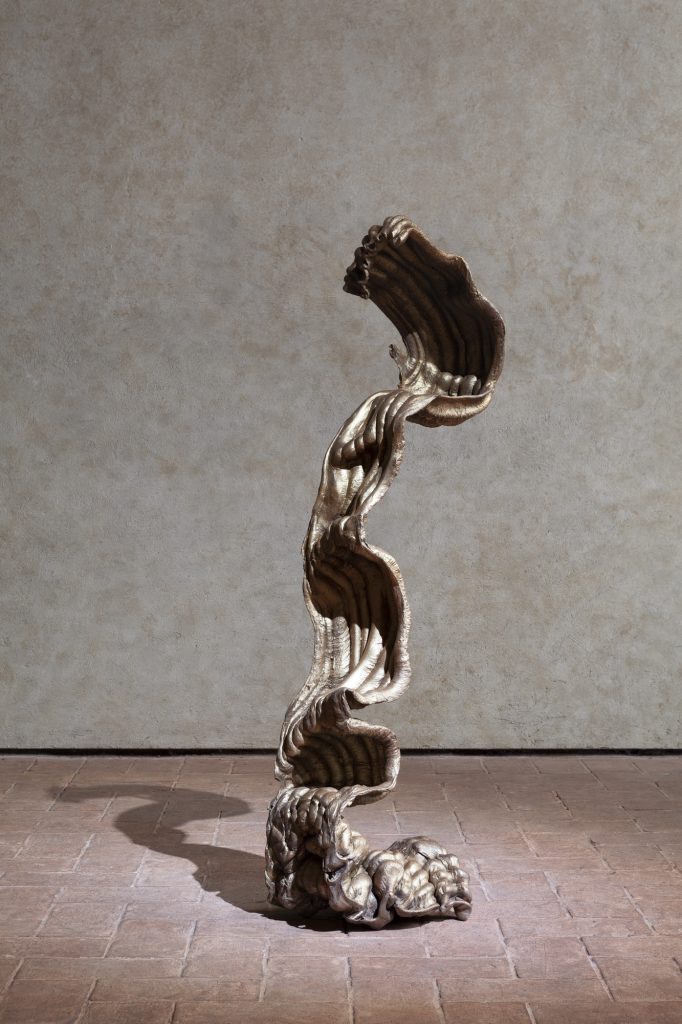 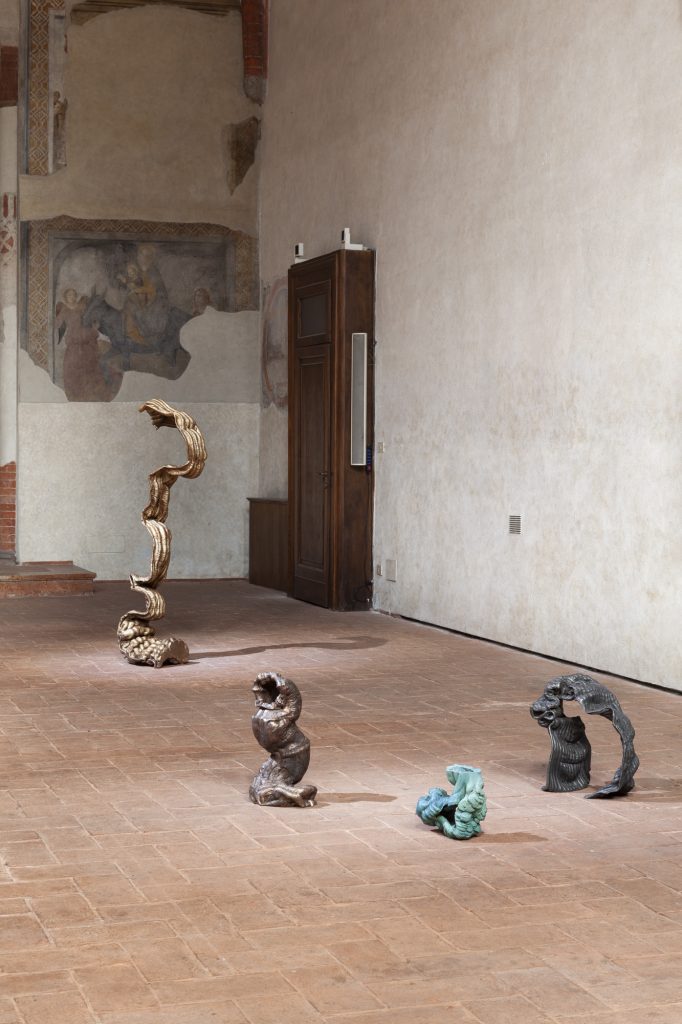 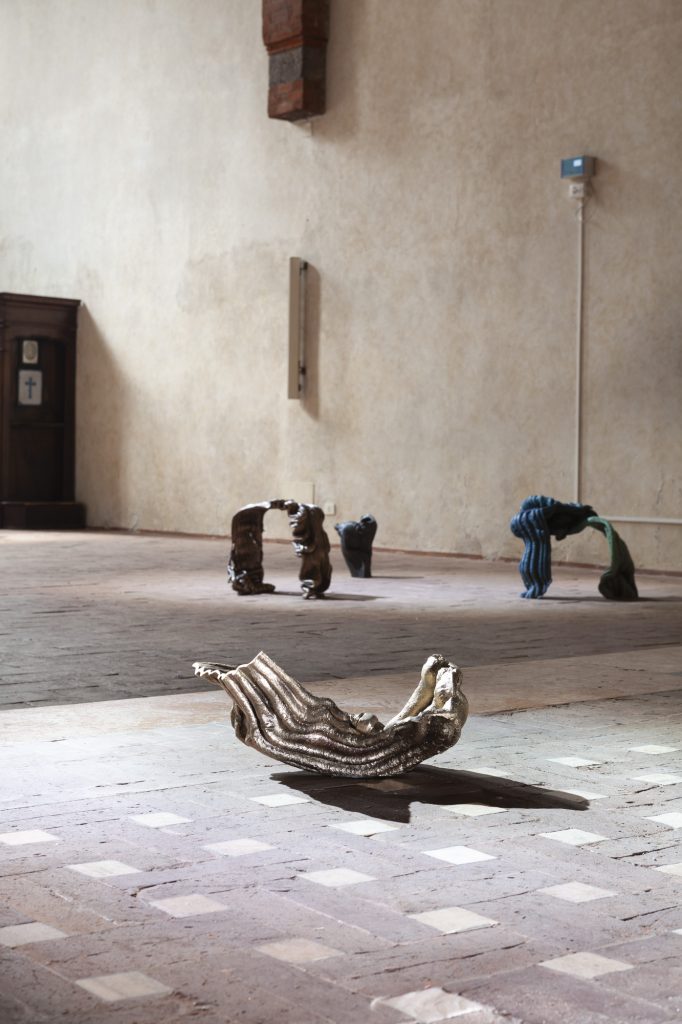 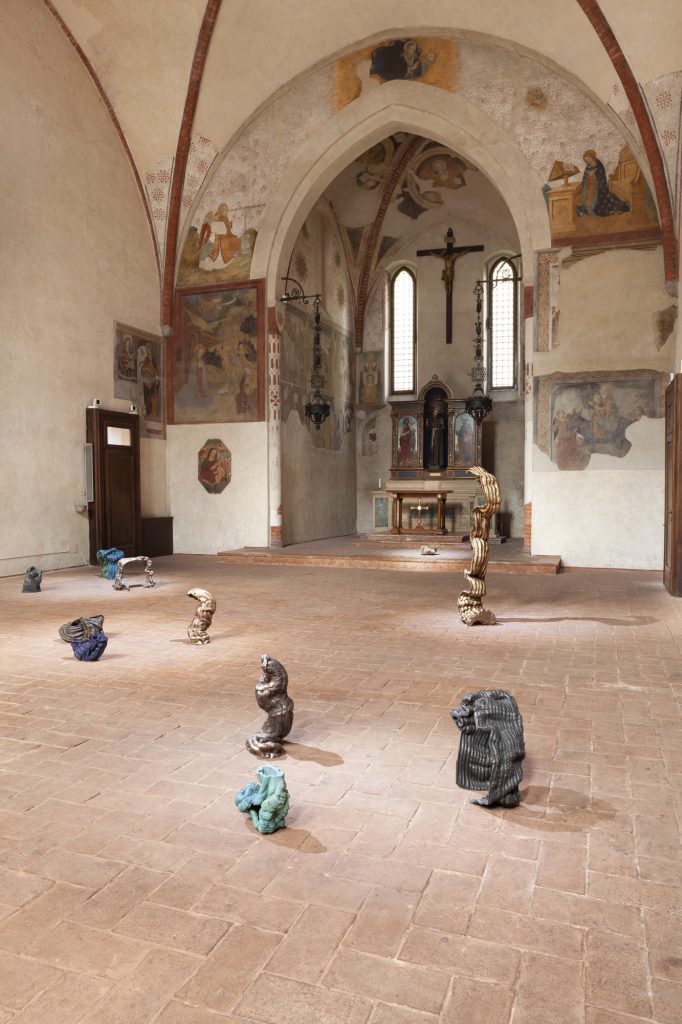 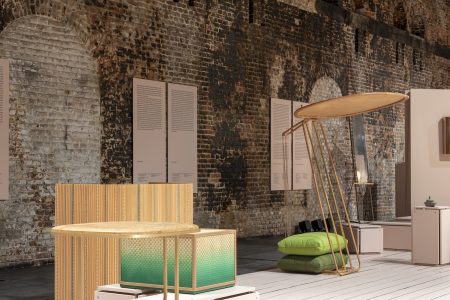