EMMA Espoo Museum of Modern Art recently opened the exhibition Interwoven. Located on the intersection between art and design, the show investigates the function and importance of textile as an ancient tradition whilst also looking to the future. TLmag had an interesting conversation with curator Reetta Kalajo about her fascinating and significant journey.

TLmagazine: Could you tell us more about the new frame provided in the exhibition concerning the role of textile as a bearer of stories, information, and culture?

Reetta Kalajo: Starting the curatorial process I quickly found an interesting connection between technique, material, and the visual part of textile making. I wanted to emphasize that in Interwoven while also framing it as contemporary art.

Regarding the role of textile as a bearer of stories, information and culture, I was fascinated by textile’s importance to contemporary life. Take for example the significance of the jacquard weaving machine. The invention simplified the process of manufacturing textiles with complex patterns. Some theorists argue it influenced the concept of the digital programmable computer. There are so many unexpected and important links throughout our history to textile.

TLmag: An exhibition on textile does not seem typical for EMMA. What was the initial reason to create Interwoven?

RK: Not too long ago EMMA opened a new wing dedicated to Rut Bryk and Tapio Wirkkala’s collection. These iconic Finnish designers and artists created experimental work and committed to studying materials. Bryk was originally a ceramist but also worked for a textile brand for which she designed handkerchiefs, linen, and clothes.

In their spirit, this new wing combines contemporary art and design to communicate work that designers and contemporary artists conduct when creating new ways of expression. I think that initiated Interwoven, which is on the intersection of both disciplines and located in this wing.

TLmag: It sounds as if the exhibition also touches on questions of Identity. Could you elaborate on that?

RK: Yes, I kept thinking of how textile is with us from our first moments as a baby to our grave. We fill our homes with textile, and use it as a visual medium. It’s versatile and gives so many possibilities to express ourselves.

In that aspect, it’s really interesting to look at the exhibiting artists and designers. Some are originally from and based in Finland, some are originally Finnish living elsewhere and we show one artist who is originally from Thailand. It was important to me to include Asia in the exhibition. Countries such as Japan, Thailand, and China have been so important to our contemporary experience of textile. In terms of techniques but also materials, like silk. I really wanted to remind people that Western culture does not stand alone. In that aspect, Interwoven is trying to challenge national identity.

TLmag: For Interwoven, designers Tapio Wirkkala and Rut Bryk’s approach was an inspiration. Could you tell us in what way and how they influenced the exhibition?

RK: As previously mentioned, Interwoven is located in the new wing that’s dedicated to their collection. It’s loosely connected in the sense that their spirit is reflected in the exhibition.

A more obvious connection is the fact that Bryk’s textile collection, Seita, can be seen while standing in Interwoven. We created a visible storage part surrounding Interwoven, which is only divided by a wall with holes. This storage contains the history of modern designers, including Bryk’s work. It was important to me to exhibit the artists in Interwoven on the same level as Wirkkala and Bryk: very bold, interested in their material, doing experiments and studying the possibilities. Ultimately, avoiding the ordinary road.

TLmag: Could you roughly take us through the curatorial process?

RK: The starting point was probably Venice Biennale in 2017, where I discovered the importance of textile and contemporary art very concretely. After deciding to create Interwoven I had to discover the design aspect of textile for which I was in close contact with Aalto University professor Maarit Salolainen. She taught me a lot and encouraged me to research the importance of textile in Western history.

I found three important themes that I kept throughout the curating process: history, mediating stories and possibilities for the future. With the latter I mean the future of textile techniques and materials. For example, there are works in the exhibition that consist of light fiber or fibers that quite literary connect us to each other. The exhibition is very future-oriented. I think the most important thing in contemporary art is to raise issues and make conversation; to make people experience something that can change their view.

That was the idea behind the exhibition and proceeded to create the show. This was an Intuitive, educational and coincidental process. You come across someone, you happen to notice someone and then go from there.

TLmag: What would you say is your favorite piece of the exhibition?

RK: That’s difficult… but I think I have to mention Kustaa Saksi’s work. His work is produced in Tilburg and utilizes a technique that acquires knowledge he doesn’t have. Therefore, he relies on a team that is skillful with jacquard weaving and the machines from the textile laboratory located in Tilburg.

He uses these in a renewing way, so he can express his story in four works exhibited in Interwoven. This personal story is that of the artist’s migraine. He produced sights he has when his migraine is beginning and ending. It entails the technique, material, personal insight and the research involved in those works which echo history. I would say these works communicate my curatorial work. 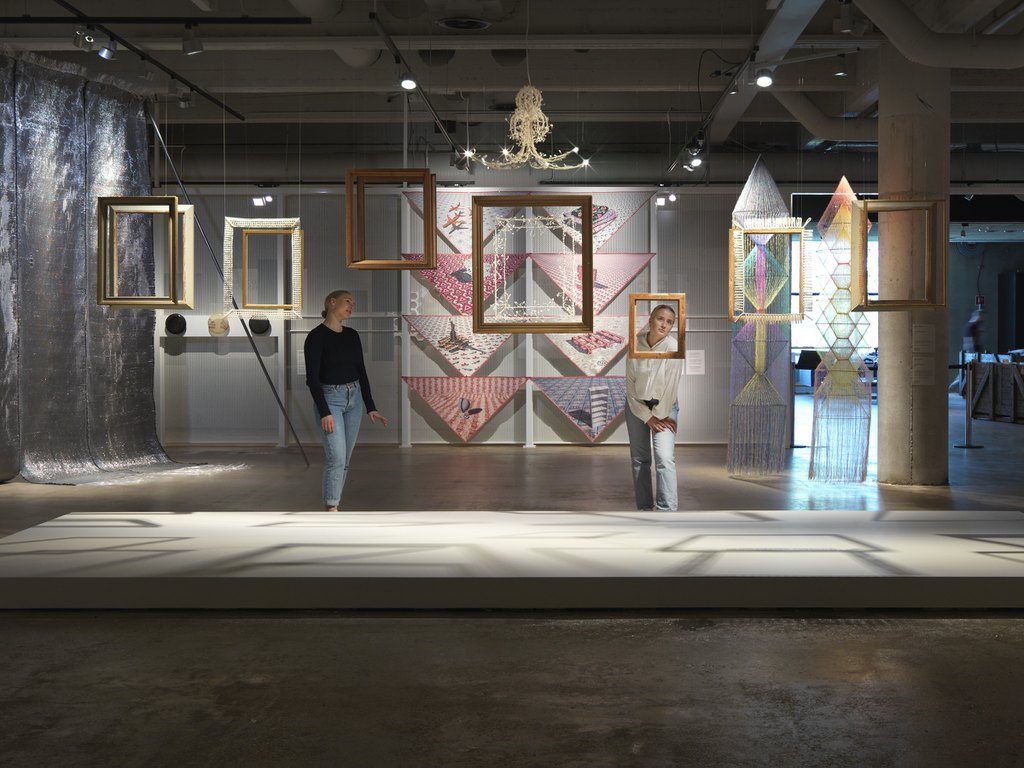 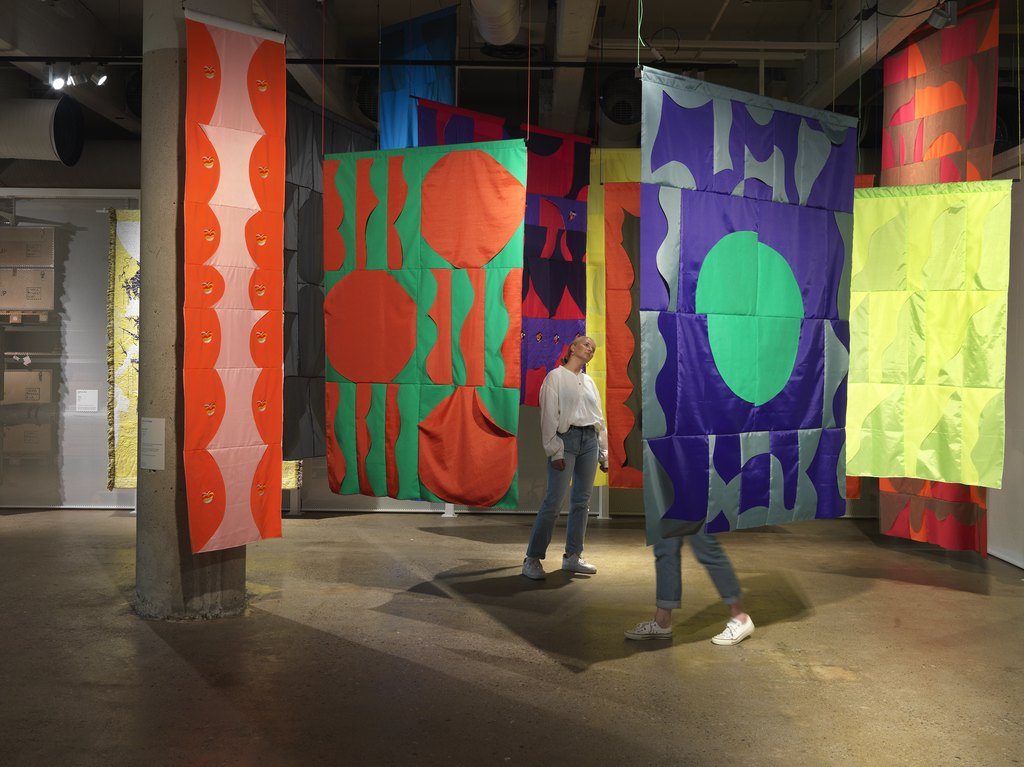 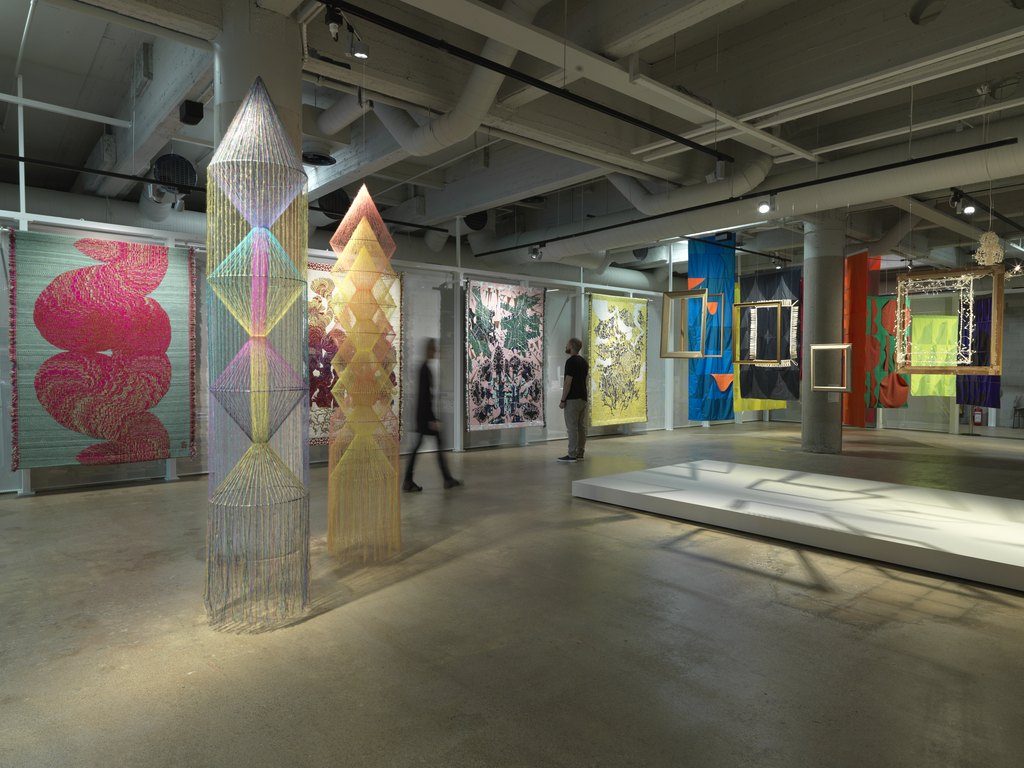 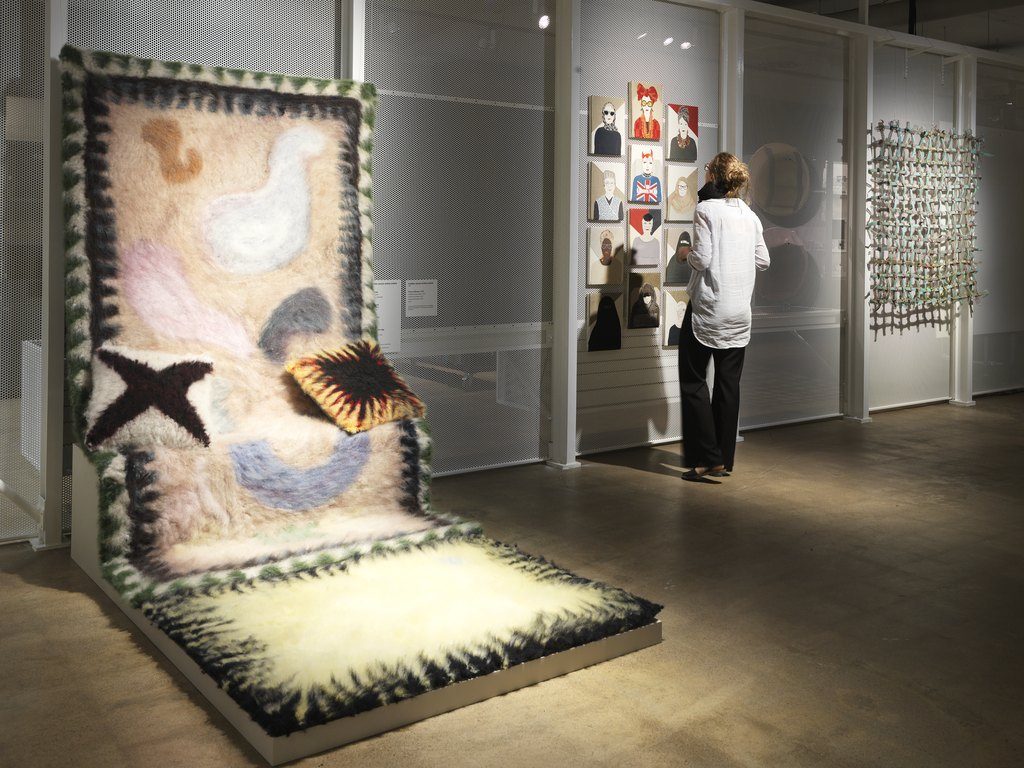 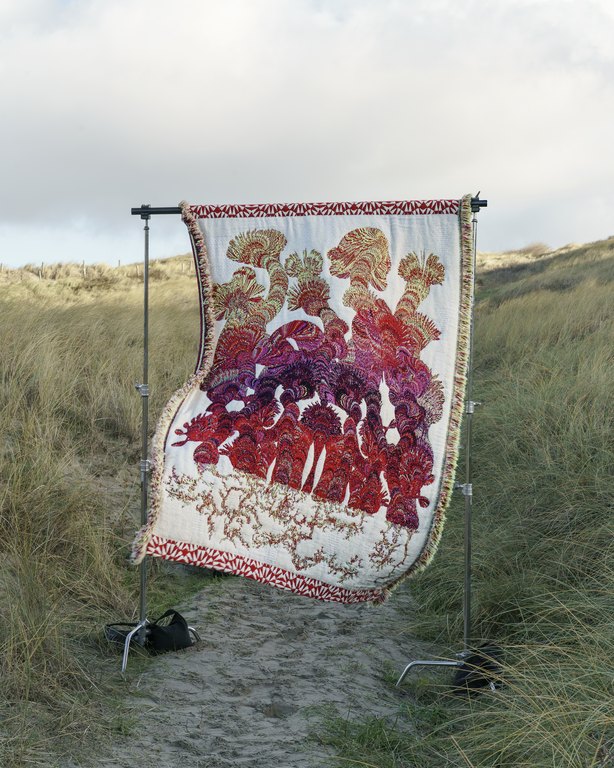 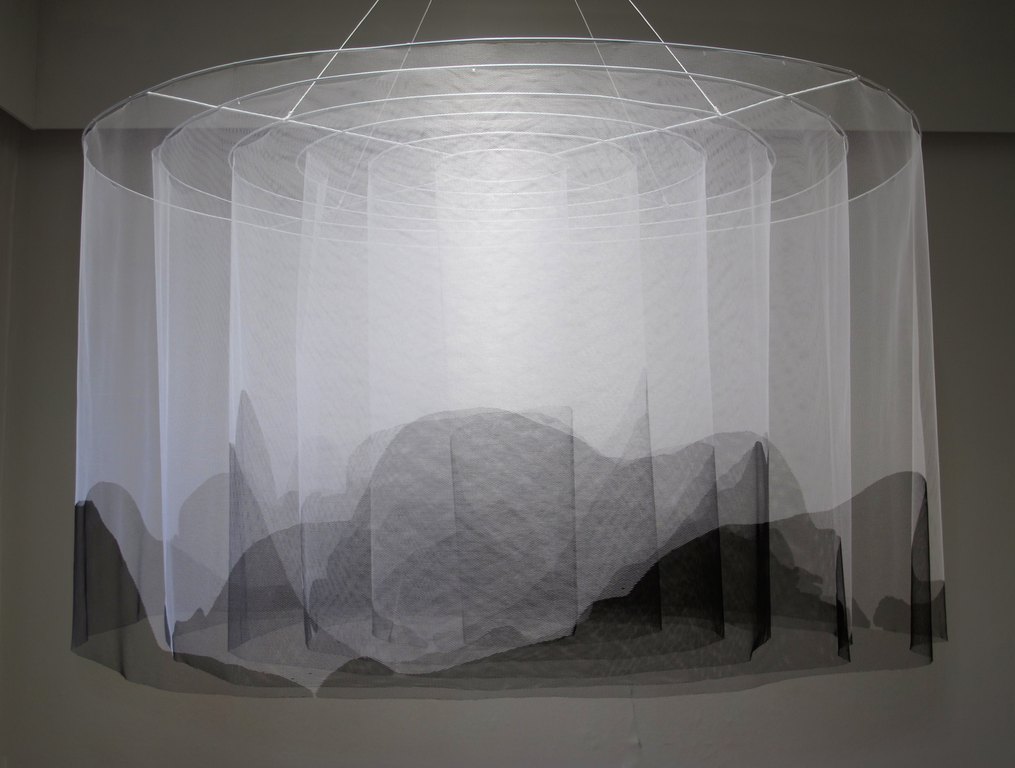 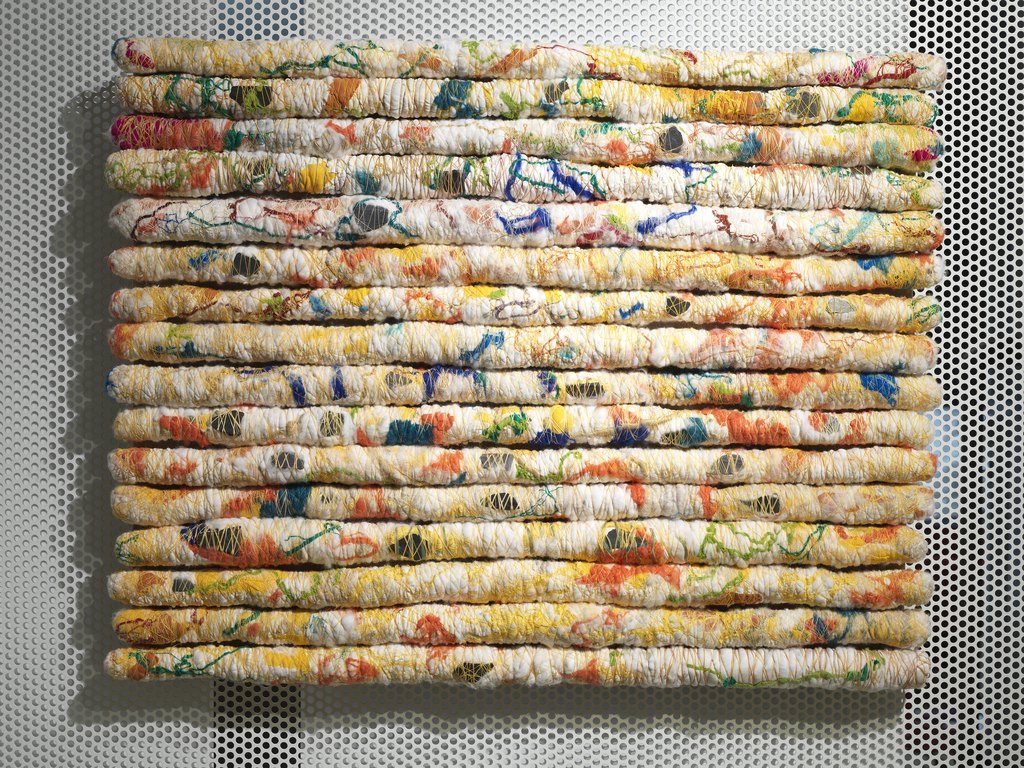 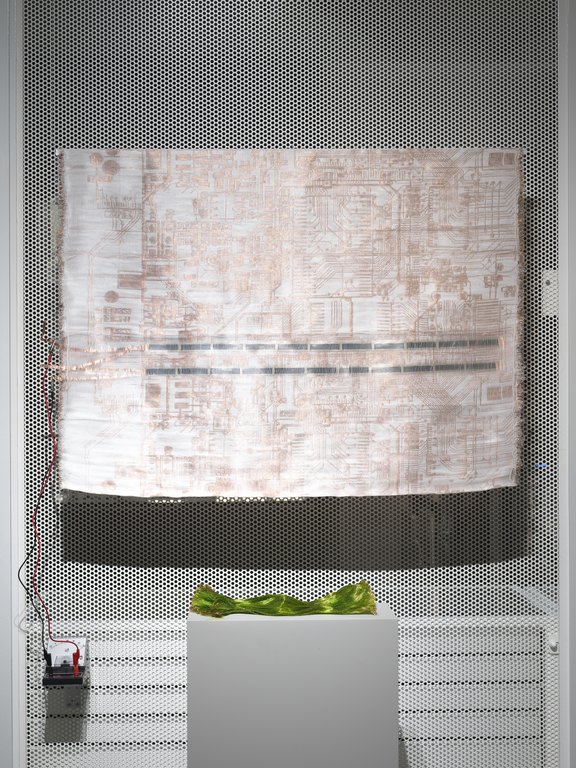 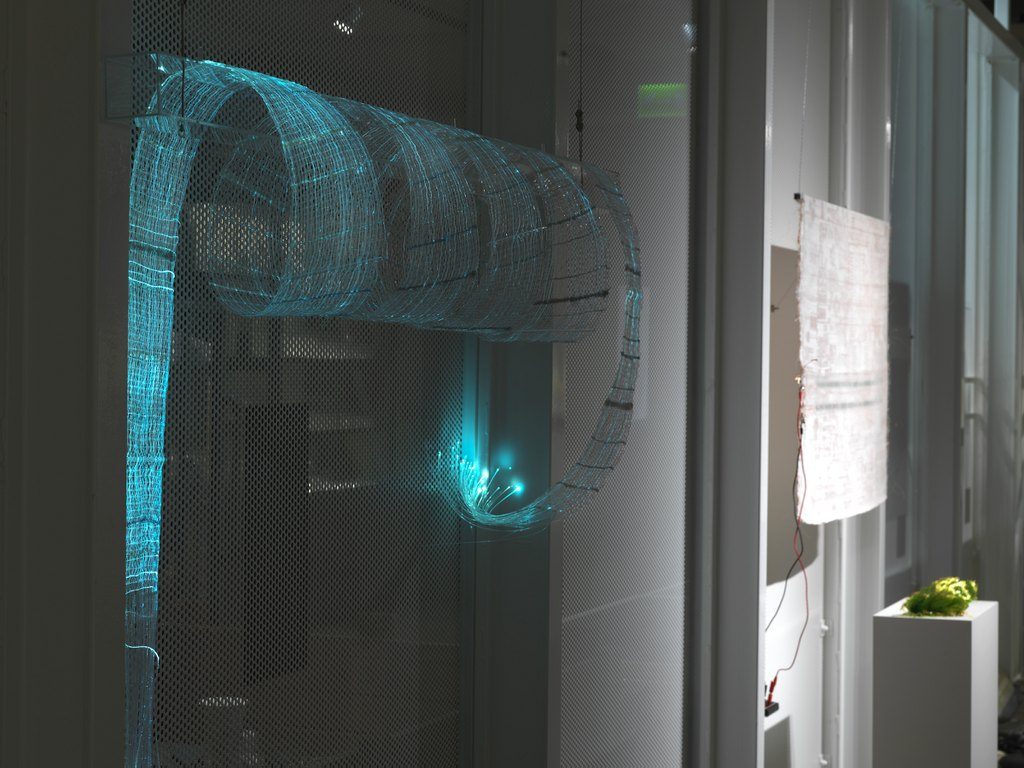 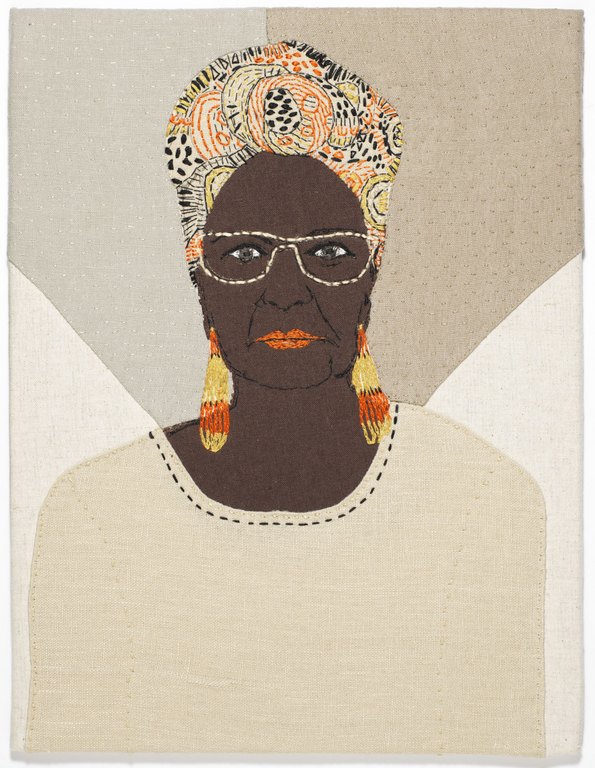