Lidewij Edelkoort: A frightening but oh so exciting future

In the run-up to the Textiles Revealed exhibition in New York, organised by Belgium is Design as part of the New York Textile Month, we spoke at length with Lidewij Edelkoort, Dutch observer of trends and author of 2014’s “Anti-Fashion Manifesto”, a plea for a return to a more ethical, sustainable and supportive fashion industry.

A meeting with a committed and enthusiastic woman who isn’t satisfied with just highlighting the excesses and failures of an industry, but who takes action on the ground, developing synergies and bringing together talents, brands and entrepreneurs looking to initiate real change.

TLmag: Among the 10 themes of your manifesto, you underscored the importance of always pushing textile research further and, more generally, completely revising a system that has gone adrift. Five years on, are your findings the same?

Lidewij Edelkoort: The situation is indeed the same. Although I have very recently begun to see change, or at least an awakening of a curiosity which is raising its head even as we speak. I receive more and more invitations to speak on this type of questions in conferences. However, awareness is not the same thing as change. It will take decades before we can discern any real advances. While certain brands’ promises (such as Zara’s undertaking to clean up its entire production chain) still seem to be a form of green washing), the fast fashion giants can no longer allow themselves to be caught engaging in bad practices. The reactions of consumers on social networks mean their questions must be addressed instantly. Hundreds of the designers employed by each of these brands have also inevitably become aware, as well. The desire for change has thus become widespread.

TL: How do you explain that, at each tier of the pyramid, from luxury (not always ethical) to fast fashion, something is wrong?

LE: When publishing their annual reports, the luxury groups must also report on their ecological impact. Over the past years, most of them have surrounded themselves with experts in sustainable development. The problem is that the obligation to grow disrupts everything. If you commit to producing with organic, local materials, but you continue to open twenty boutiques a year that cancels out all your efforts. What is important today is to design less, to produce less, to sell less. And then, of course, to raise prices a bit. This won’t happen without the sacrifice of certain brands that will not be able to adapt to these new ethical criteria. To get started, I am preparing a green book: a buying and trend guide for those who wish to produce and consume differently, once again finding emotion in fashion. I present fibres of the future that don’t use water (or very little) such as ramie, nettle, hemp and paper mulberry. We talk about recycling, but also about the value of eternal basics.

TL: A few years ago, you cited Dover Street Market as one of the last examples of a truly inspiring boutique. Can anything still save physical stores from their predicted death?

LE: By increasing the number of boutiques -always more homogenous and standardised – we have lost our appetite for fashion. The advantage of moderate purchasing is that it encourages us to look at our clothing in a different way and, consequently, to rediscover the pleasure in buying. By seeking to position themselves on all fronts (from trainers to hotels, passing through lingerie), the luxury brands have cannibalised all markets.

TL: Do you think the luxury brands could be required to invest more in research, while conversely, the fast fashion brands could be forced to produce less and to pay suppliers more?

LE: The only truly effective solution is the minimum price policy, such as already exists for agriculture. A t-shirt for less than 15 euro or a 4-euro bikini is unacceptable. This morning, I read an article in Vogue. The journalist noted that her friends – stylish and fashion-aware – were willing to spend 17 euro on a glass of wine, but not on a swimsuit. Such weird calculations have muddied the waters. At the same time, we see that very young consumers – those protesting for the climate in the streets and eating vegan – feel an urgent need to put the brakes on. Some decide to refrain from buying any clothing for a year. This year, a student at London’s Royal College of Art (editor’s note: Laura Kraup Frandsen) refused to create an end-of-year collection. At that level, this amounts to the sacrifice of her talent. Instead, she proposed an installation denouncing the horrors committed in the name of fashion. An undertaking spread throughout the world with the hashtag #BoycottFashion.

TL: Happily, some designers visualise fashion differently: favouring the local and a return to craft. Is this an ephemeral trend or a real shift?

LE: One time, during the festival of Hyeres, I spoke with a potter working in the south of France who committed to limiting herself to local production. If you wish to buy one of her pieces, you must go to her workshop. The purchase becomes a sort of pilgrimage. The object becomes desirable again. Having been born in 1950, I had the chance to grow up in a time when having “nothing” encouraged fantasy and taught my unbridled creativity. Today, when a client comes to me with a problem, even before we finish talking, I am conceiving the start of a solution. When I was a child, one car per neighbourhood was the norm. We are gradually moving back to that. The changes currently occurring are brutal, but fascinating.

TL: Must the advances in the sector come from the designers – who you have said do more styling that designing – or rather from the new profiles, such as those following the training you have set up at New York’s Parson School?

LE: Nine years ago, when I organised the first “Talking Textiles” exhibition in Milan, it caused an electroshock. Until then, in design, you spoke only about form. No one was interested in textile; designers had no knowledge about it. Even with something as tangible and concrete as Jacquard… This work to rehabilitate a failing sector resembles a crusade, but it is worthwhile. Halfway between technology and craft, my students’ projects prove that it is possible to reconcile the two. Innovation can take a hybrid form, between biotechnology and macramé. We are moving further and further away from the idea of futuristic design, towards a design that unites different trades: textile designer and chef, textile and perfume, textile and sound, for example.

TL: Consumers seem to want to buy local. Do you think that ‘micro-brands’ -designers/craftspeople set up in the provinces, for example –constitute an interesting business model?

LE: I believe in the return of the neighbourhood seamstress. This approach still exists in countries like Africa and India. So there is a double challenge: reintroducing this economic model here, while ensuring it doesn’t disappear there.

TL: The textile industry is hard pressed to find designers and patternmakers. What needs to happen to interest young people in technical jobs?

LE: It would be beneficial for recent graduates to group themselves together to propose their expertise to brands in a freelance model. This would make it possible to eliminate the outsourcing of prototyping. In fashion as well as design, creating new products is expensive, and has a sizeable environmental impact. When we see how brands’ collections – in both fashion and design – are similar, it would be more logical to restrict design to a few independent studios responsible for presenting new products to these brands. This would make it possible to rationalise product development costs and avoid the standardisation of the offer.

TL: The threat of artificial intelligence would remain, though…

LE: I have already lost two Japanese clients who have fired their stylists and delegated design to data and artificial intelligence. My question is “Can we really teach a robot to think intuitively?” Creation must remain a mystery.

TL: Your perspective on the fashion sector translates to other domains, such as publishing, which is also in crisis.

LE: Influencers have completely muddied the waters, but the CEOs of the brands are aware that their quest for ever-greater visibility among the bloggers and vloggers has favoured the flourishing of collections designed solely based on image. These goods are unsellable, and just increase the volume of waste created by the sector. The problem of landfills is becoming unsurmountable. The influencers have; however, helped journalists to reinvent themselves and to regain depth in their articles. In a magazine, fashion today has its place between culture and politics. We must consider things with greater amplitude, putting words back into the central position.

TL: You are curator, along with Philipp Fimmano, of the “Textiles Revealed” exhibit. In a fast-evolving industry, what is the interest of this type of event?

LE: Four years ago, when we decided to organise an event around textile in New York, our goal was to prepare the city for the Masters in Textiles that we were about to create at the New School/Parson School of Design. From the end of August to the end of September, the NYTM (New York Textile Month) encompasses around a hundred events, in museums and cultural venues, as well as in artists’ workshops. Belgium, through WBDM, is the first foreign country to take part in the project. This year, the designers selected for the “Belgium is Design” label will exhibit for a week at a New York gallery. The impressive quality of their projects can be partly attributed to the involvement of your schools. Unlike many others, La Cambre never gave up on exploring this sector. Belgium’s textile heritage partly explains this awareness, but it can also be found on the side of the artists and craftspeople themselves. Some of the proposed pieces are monumental. They are sold in art galleries, but their creators also work for the industry and as designers. It’s another hybrid status. They are often not content with design alone. They want to manage production as well. This holistic approach is synonymous with great freedom. Don’t forget that textile has always been intimately linked with the concept of freedom. In the Bronze Age, nomadic women weavers earned their independence by selling the fruit of their labours. This new passion for the sector thus seems to be a true renaissance. 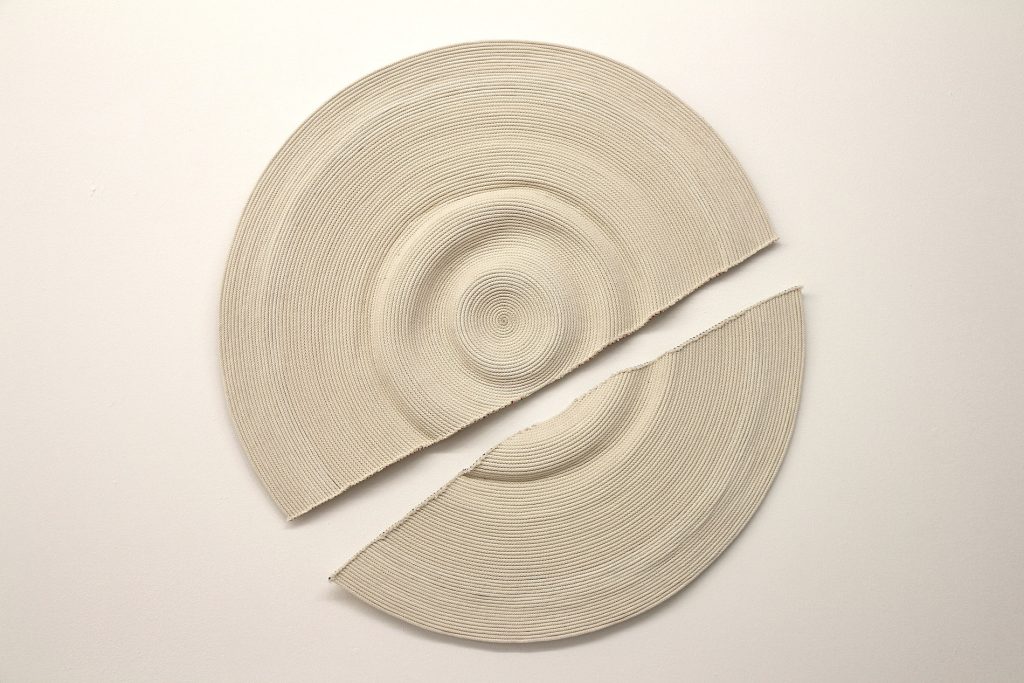 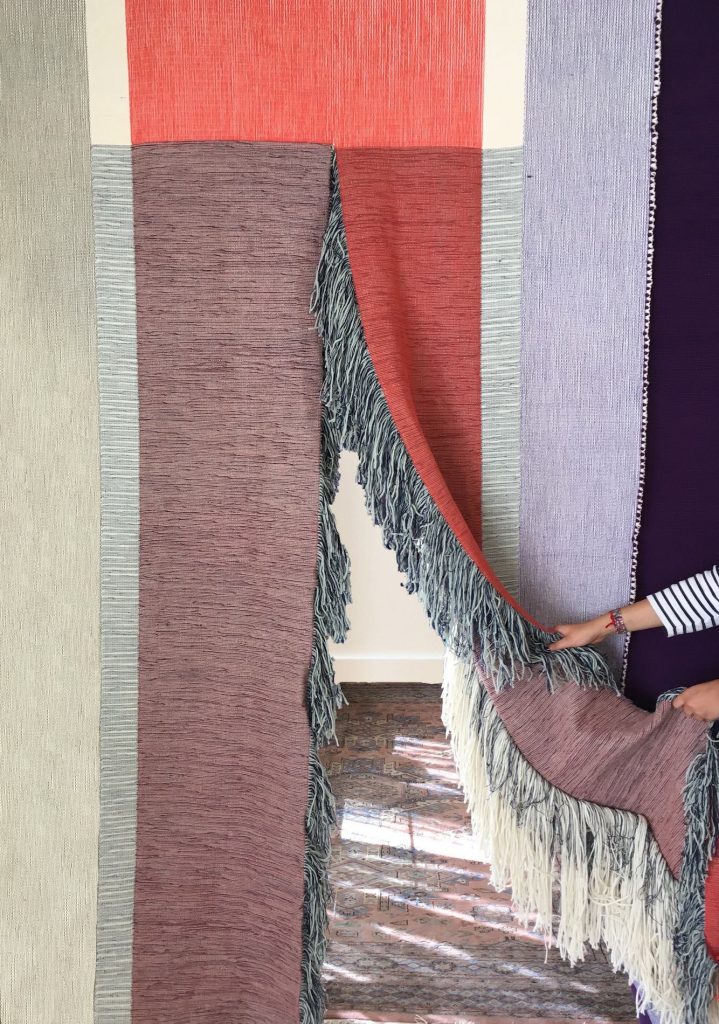 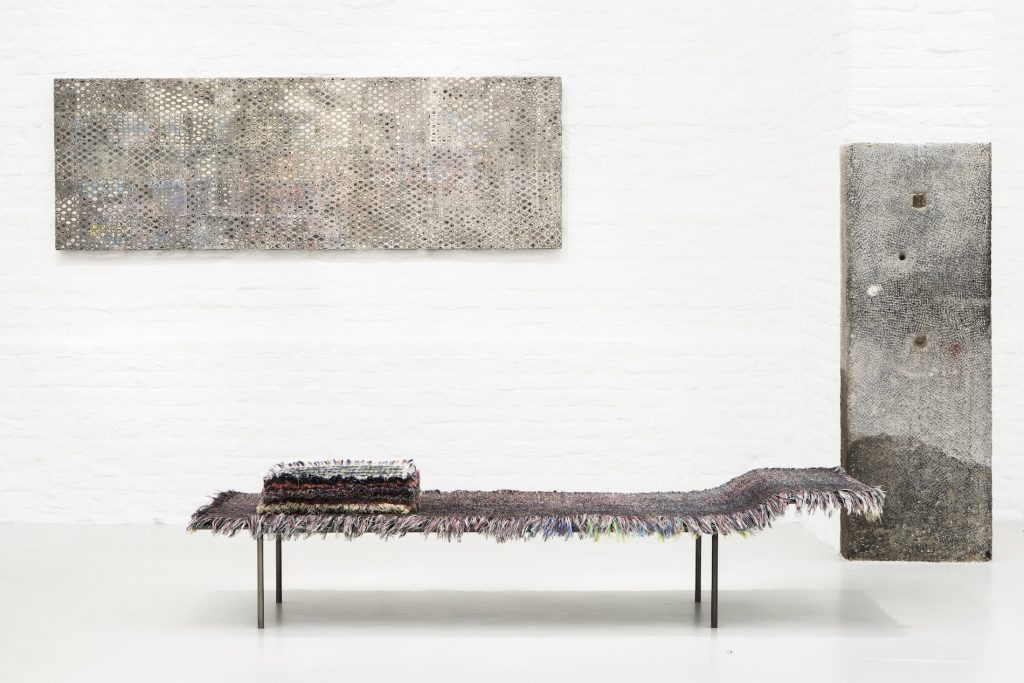 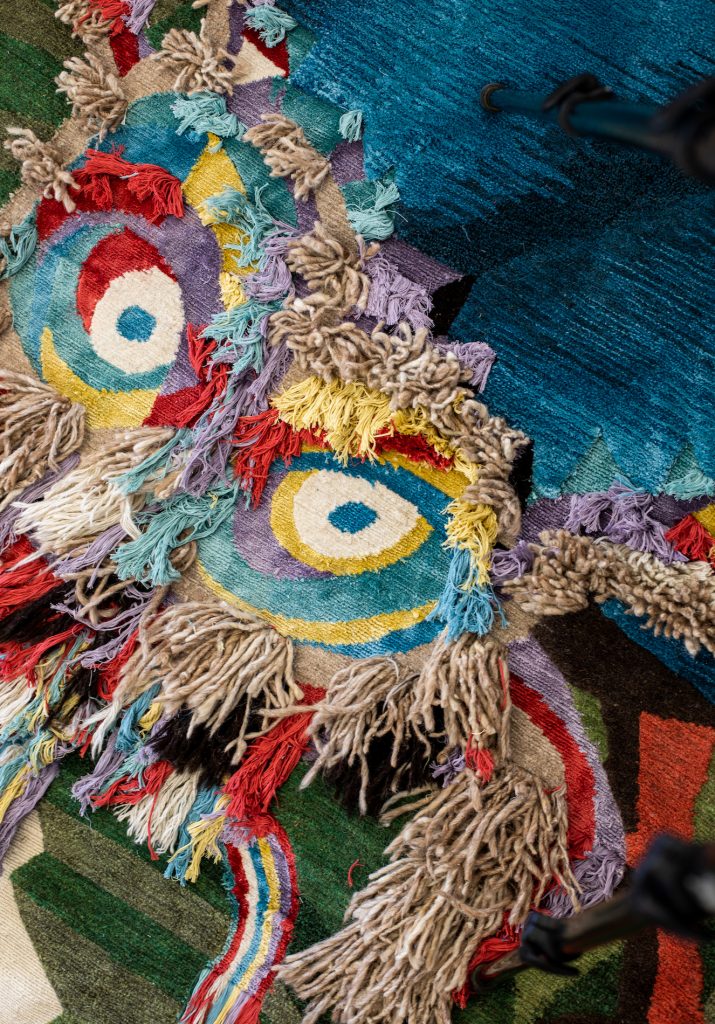 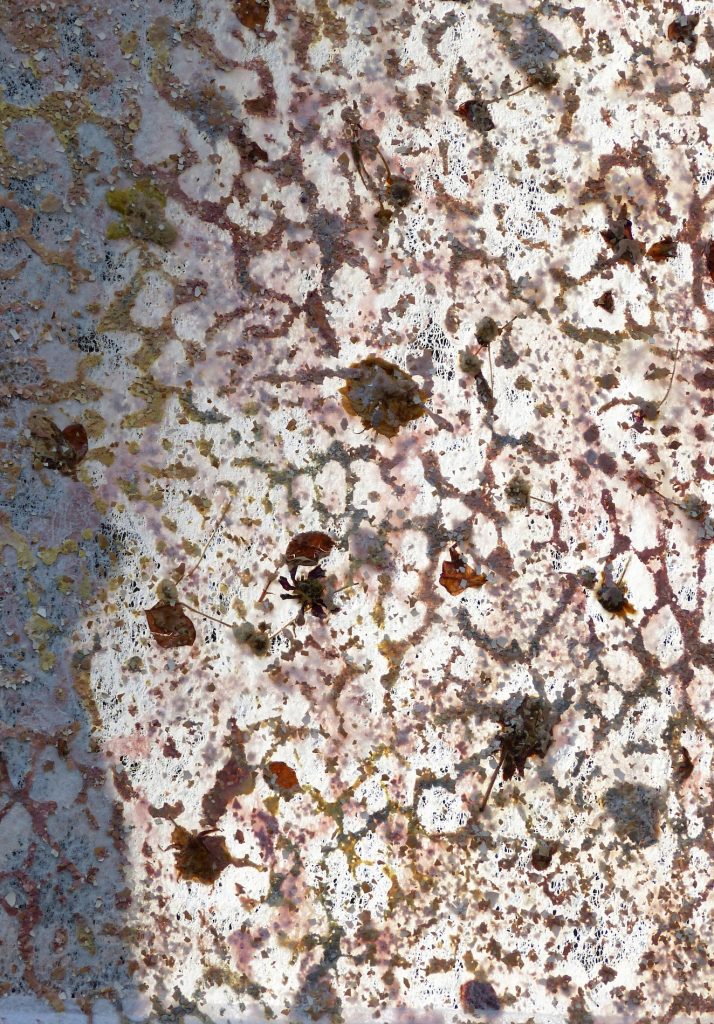 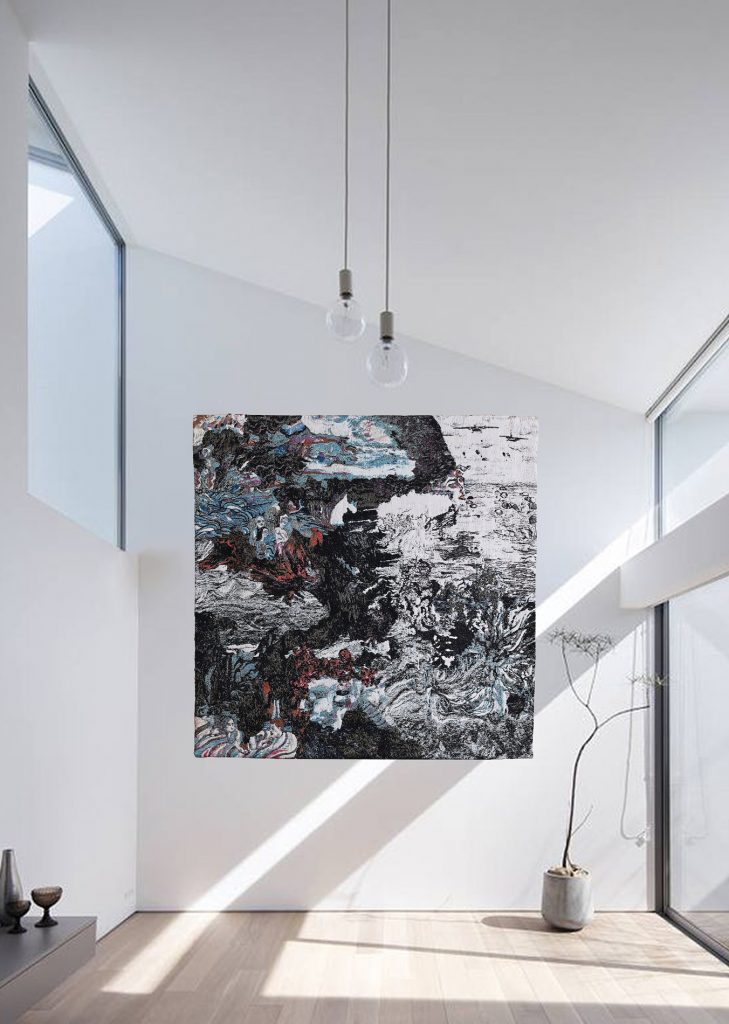 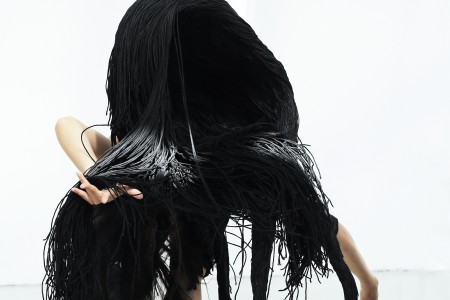 Leading trend forecaster and frequent talent maker, Lidewij Edelkoort returns to London Design Festival this month with a special showcase of 15 avant-garde projects by emerging designers, just out of school. Mounted at Carpenters Workshop Gallery in London from 4-23 September, the Graduate(s) exhibit takes the pulse of the European design zeitgeist. 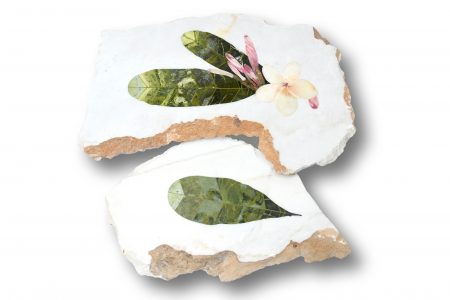