PAU: The Opportunity of Penn Station

PAU’s Vishaan Chakrabarti met with TLmag to discuss glass, design after modernism and architecture as an act of writing

PAU (Practice for Architecture and Urbanism) is a New York City-based design studio led by Vishaan Chakrabarti. Trained as an architect and urban planner, Chakrabarti wrote A Country of Cities: A Manifesto for an Urban America and is the founding director of the Center for Urban Real Estate at Columbia GSAPP. PAU recently published a vision for Madison Square Garden and the former Penn Station and met with TLmag to discuss glass, design after modernism and architecture as an act of writing.

TLmag: How did PAU become involved with Penn Station?
Vishaan Chakrabarti: I worked about a decade ago for a big public/private partnership that was trying to fix Penn. It fell apart when Eliot Spitzer resigned, the Lehman brothers fell and the economy went to hell. It all went dormant until recently, when Governor Cuomo announced plans to move the train station to the Farley Building. The New York Times editorial board called PAU, saying they felt they needed to do more and asking for our help.

TLmag: PAU’s proposal considers the scale of urban entry as well architectural materiality. What do you see as the role of the architect or designer in urban development and policy?
V.C.: I’ve finally reached a point of clarity in my own head after 25 years in architecture, planning, policy and development. Where do all of these things fit together? Why try to address the issues that I think are pertinent through the actions of an architect or the role of an architecture firm? I started out feeling like most working architects do: thinking that by the time the project hits your desk, a lot of the big, important decisions have already been made. In reality, I’ve discovered that we can advocate for a certain policy and offer up models for that policy. We can help explain to people that when enormous, seismic events happen in our world (like the recession, Katrina or the Trump election), there is a physical manifestation of that event.

TLmag: The original Penn Station persists in its mythical status among New Yorkers, and current proposals are under great scrutiny. The public has expressed concerns regarding the “glassification” of the West Side of Manhattan.
V.C.: Glass is so interesting because it started as this radical proposition in the 1950s with universal modernism. However, the style became an economic vehicle for the development world. What was once actually quite radical and beautiful has now transformed into the default position for a new condo or a new office building, whether it’s in Dubai or Mumbai or Shanghai. Now, whether I go to Seattle, Toronto, Brooklyn, Mumbai or anywhere else, I like to spark a smart conversation; I don’t want to work on those buildings that could be built anywhere, and I want infrastructure to support the density.

TLmag: How is your proposal exceptional in this regard?
V.C.: This is where I think architecture becomes extraordinarily important because it gets into how you build cities. What is it that gives these buildings the capacity to change over time? To me, that is at the heart of sustainability: how do you look at what you have and see the multiple ways to use the space? That is the essence of the Penn Station proposal. I believe this idea is a huge part of this generation. We see these back-to-back events—9/11, Katrina, the recession—and all of a sudden, we wake up from this sugar high and realise the world doesn’t have unlimited resources. Architecture shouldn’t be about whether I can make my building look like a bird. That is why the approach to the station is so fundamentally different. I don’t think it’s about me, and I don’t think it’s about PAU. I think it’s about getting off the train, arriving in one of the great cities of the world and having this direct experience with it as you arrive, which is exactly what you don’t have today. You get off a train today and you have no idea where you are.

TLmag: You frequently refer to Madison Square Garden as “hiding in plain sight” to explain your design.
V.C.: I’m a big Ken Frampton fan, and I think there are limits to the whole critical regionalism argument, but this idea of reading a place before you write in it resonates with me. I think of architecture as an act of writing, and I do a lot of writing. For every single project, as a starting point, I’ll usually write a two-page essay that isn’t a left-brain analysis, but rather a right-brain exposé on the site, the program, the infrastructure and what is driving the project. That document, in addition to some initial concept sketches, becomes the platform for the entire studio. This writing process is extremely important to me. You can’t be a great author unless you’ve read. I critique the site not to reject everything that isn’t local, but just to highlight that we have to read and respond to place.

TLmag: The existing Madison Square Garden is reviled for what it replaced, but is there room for the average, the mundane and the ugly in design?
V.C.: My analysis of the original station is that it was quite classist, which is why, when you go to Penn Station today, there are legacies of decisions made in the early 1900s. The Penn Station project was not about neighbourhood development. Taking the garden structure, stripping away the unwanted, and making it extraordinarily porous for the neighbourhood is a way of trying to undo and reverse the history that this cloistered, grand space represents. It was originally meant to send the message: “Be awed by us as you enter, we don’t care how terrible or ugly the rest of the neighbourhood around us is.” That’s not what we’re about; we’re about ourselves. Our idea for the station is literally the reverse of that in terms of how it pulls the neighbourhood together. But again, I think that it is fundamentally an act of reading and writing, building upon what’s there instead of tabula rasa. It is not always about imposing the new in such a direct fashion. 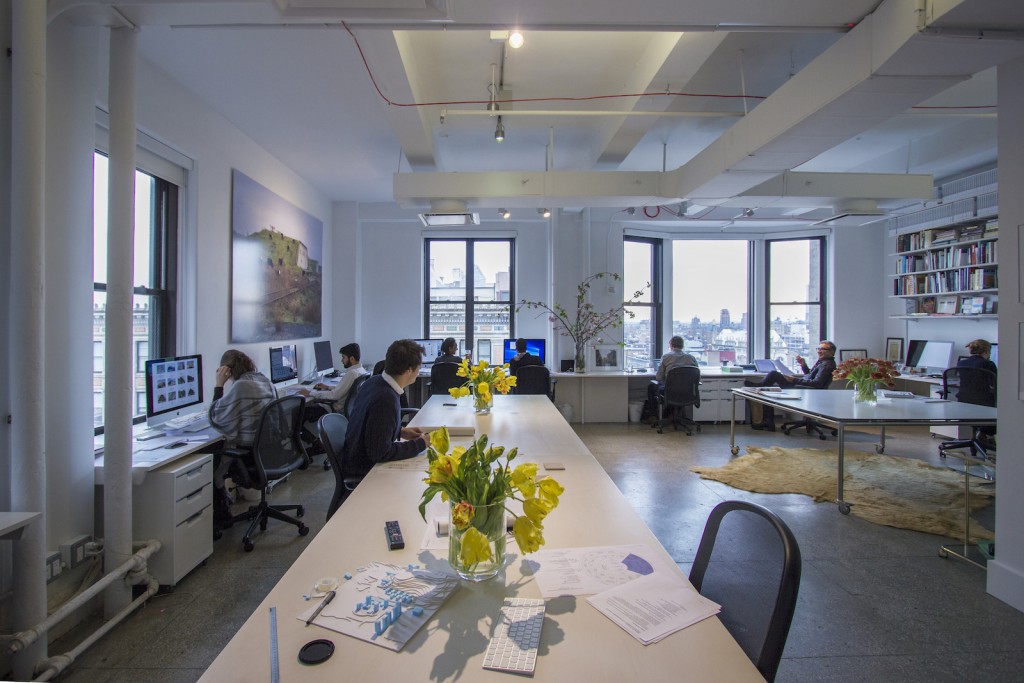 PAU's office in New York
‹ Back