TLmag 27 Extended: New New York
Special Guests
For the Paris-based, Austrian artist and designer Robert Stadler (born in 1966 in Vienna), Solid Doubts does not represent a mid-life crisis; it is not about nostalgia. This exhibition of Stadler’s collages...
Scroll right to read more ›
Text by Lise Coirier

For the Paris-based, Austrian artist and designer Robert Stadler (born in 1966 in Vienna), Solid Doubts does not represent a mid-life crisis; it is not about nostalgia. This exhibition of Stadler’s collages and centrepieces, displayed at The Noguchi Museum, is a voyage through space and time within “an oasis on the edge of a black hole,” as Isamu Noguchi described the museum.

This unique, trendy spot, one of the most acclaimed destinations for lovers of art and design in Long Island City, New York, was founded by Noguchi in 1985. It was the first museum in America established by a living artist to show his own work. The Noguchi Museum is a peaceful refuge for Solid Doubts, which could be a metaphor for the unfinished masterpiece or the quest for happiness. Maintaining a very thin line between art and design with his theoretical and practical mastery of the contemporary applied arts, Stadler is reassembling all his work and thoughts in a series of shows and momentums in which he contrasts himself with another figure, Noguchi, and with a long historical sequence of artists from the modern era, transporting us from Dresden to New York.

TLmag: How would you like people to perceive your exhibition—as an exercise in contrasts, a dialogue or a new kind of perspective on Noguchi, one of the most famous mid-century artists and designers?

Robert Stadler: I hope there are several ways to approach this exhibition—it’s always a good thing when there is more than one. When I first received the invitation to show at The Noguchi Museum, the project wasn’t really clear, and Noguchi and I together seemed to be a rather surprising match. I even wanted to call the exhibition Blind Date. Then Dakin Hart, the Noguchi Museum senior curator, began feeding me examples, anecdotes and images showing parallels and affinities which I had never suspected between Noguchi’s work and approach and my own. You can certainly call it a dialogue or conversation, but we aimed to go further, trying to establish an intensely intimate intermingling of objects. For example, one of my Cut_Paste pieces is accessorized by Noguchi sculptures—a rather daring thing to do. This is slippery ground onto which Dakin maliciously dragged me.

TLmag: Do you feel that Noguchi’s uncertainties and sculptural exploration of peacefulness are close to your own deep reflections and artistic issues? How do you deal with your “solid doubts”—also the title of your exhibition?

R.S.: As I mentioned, I progressively learned what Noguchi and I might have in common, and one of the main things is our questioning of the distinction between well-established categories such as art and design. That’s how I came up with the title Solid Doubts. But one mustn’t forget that our historical and political contexts were radically different and so was/is each of our personal histories. Noguchi was torn between two cultures, Japanese and American, all his life. His search for peacefulness certainly has to be seen in terms of those biographical specificities. A timeless example of how both Noguchi and I deal with our uncertainties is a certain natural tendency to go places that our previous works would not have led anyone to expect. Not as a conscious decision or attitude, but rather because we couldn’t help it. How I deal with those doubts? Well, I’ve come to a point where I just accept them as my motor, hence the adjective “solid.”

TLmag: Do your “solid doubts” apply both to your life and your artwork? Has Noguchi, as a category-defying, multicultural, cross-disciplinary innovator, shown you some new facets of your “system of objects,” to paraphrase Baudrillard?

R.S.: Those doubts we are talking about aren’t a conscious tool. They are intuitive characteristics that serve as survival strategies. Combining Noguchi’s works with mine brings out the digital character of my objects (even if they are often hand-crafted), as opposed to Noguchi’s characteristic trace of the sculptor’s hand.

TLmag: Your work’s connection to semiology and anthropology appeals to me. Do you see an object as a sign, a way to depict your ambiguous relationship to the world? Do you like poetry, or are you far more conceptual with your collages? In fact, I am pleasantly surprised that you describe your exhibition with Noguchi as a “rendezvous” and talk about it in connection with the famous 18th-century Fragonard painting, Happy Accidents of the Swing (1767-68, Wallace Collection). How do you inject love, movement and lightness into your artworks?

R.S.: I believe poetry can be found in both lightness and weight, as well as in movement and statics. And as weight can reveal lightness, just as movement can reveal statics, poetry also lies in the connections between those notions. The different settings in the exhibition play with those stimulating interrelations. For example, we hope my massive PdT (ashlar) objects will bring Noguchi’s anthropomorphic elements from his Herodiade stage set even more to life. Or that the uncertainty in Noguchi’s quest for shapes in his Akari light sculptures will respond to the freezing the slow process by which traditional furniture dissolves in my Pools & Pouf! The perfect marriage, I’d say, is represented by his Akaris hanging from my Anywhere #2 light fixing. In this pairing of pieces with over half a centuries’ age difference, traditional Japanese paper goes hand in hand with carbon fiber to celebrate the combination of lightness and movement.

TLmag: Would you challenge yourself to become a sculptor? Or do you continue to believe that you need to team up with craftspeople and the industry to perform as an artist as well as a designer? Is that the way you’ve chosen to showcase your resistance to functionality with a critical eye and mindset, even though the objects remain your true expression?

R.S.: Teaming up with craftspeople who sometimes not only advice or help but even build the actual piece has been a reality for sculptors from Canova to Koons. But anyhow, if the notion of sculpture connects my work to Noguchi’s, it’s in an inverted way. Noguchi was a sculptor who also used his art to make useful objects and environments. People call the Akari “lamps,” but he called them “light sculptures.” What mattered to him was space. Sculpture informing space. And that art is available in different forms, from unique artworks to serially produced objects such as his Radio Nurse. I am a designer who does not exclusively constrain his work to the production of functional objects. But when I design an object that gives light, I always call it a lamp, no matter how different it might look from the idea that we have of a lamp. But most importantly, I don’t care if a thing is called a “sculpture,” “object” or “product.” The only thing that matters to me are what it offers to me and how I can deal with it, mentally or practically.

TLmag: Does that mean that aesthetics matter, as well as the wabi-sabi, which reflects our difference as Westerners as we explore the renovated Noguchi Museum Zen garden?

R.S.: Aesthetics absolutely matter. You either choose Mac or PC. As for wabi-sabi, if you take certain themes, such as the morphing of the natural into the artificial or forms of randomness/control and fragmentation, on which we elaborated for my current survey exhibition, You May Also Like: Robert Stadler, at the Kunsthalle in Dresden, it becomes clear that I share affinities with the main concepts of wabi-sabi. But that was not a reason for the Noguchi Museum exhibition. I’d rather say it’s more of a lucky match that popped up during the working process. However, transposing the ideas of wabi-sabi into the digital age certainly is an exciting field of research for a future project.

You May Also Like: Robert Stadler, at Kunsthalle im Lipsiusbau, Dresden, until June 25: the first survey exhibition of designer Robert Stadler, curated by Alexis Vaillant, initiated by Tulga Beyerle

MuMo 2, a group show, Mobile Museum traveling in France, through May 2018

To read: Illustrated catalogue with texts by Joseph Becker, associate curator of architecture and design, San Francisco Museum of Modern Art; design writers Emily King; and Emily King and Noguchi Museum senior curator, Dakin Hart. The 120-page publication will also include installation photography—shot by a drone—and schematic renderings and conceptual collages of the works on view. It will be available in late May 2017. 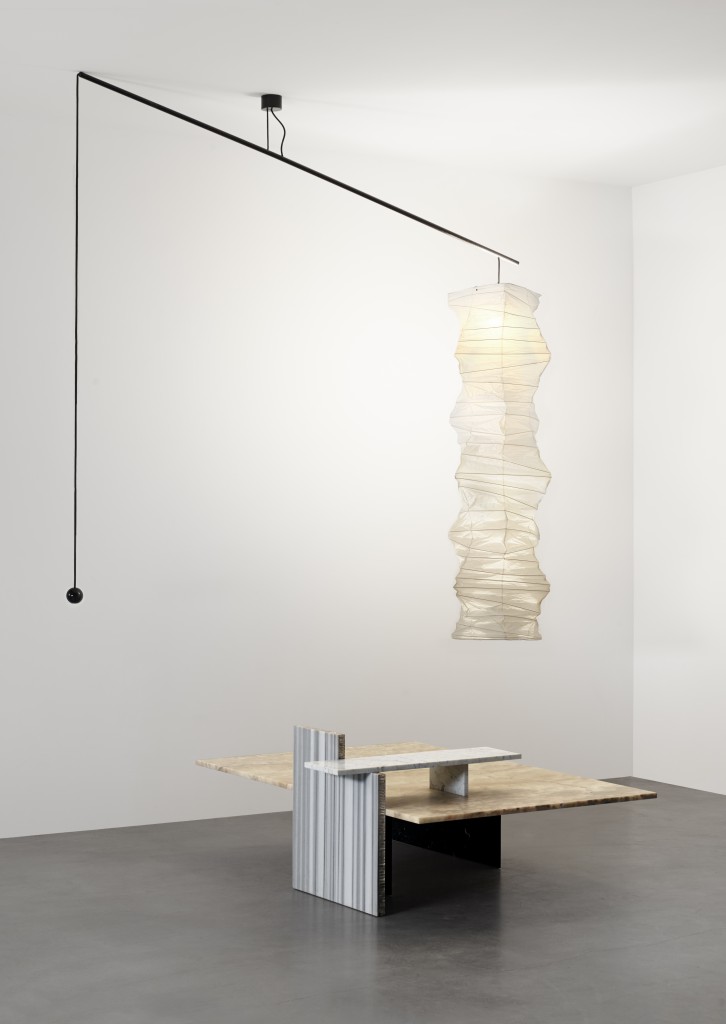 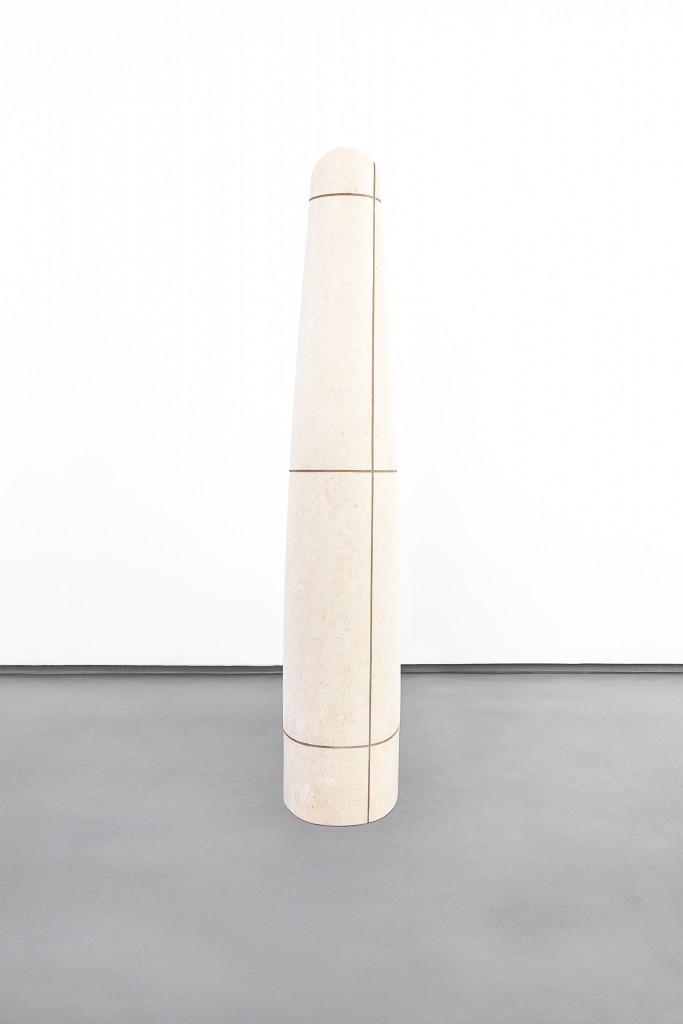 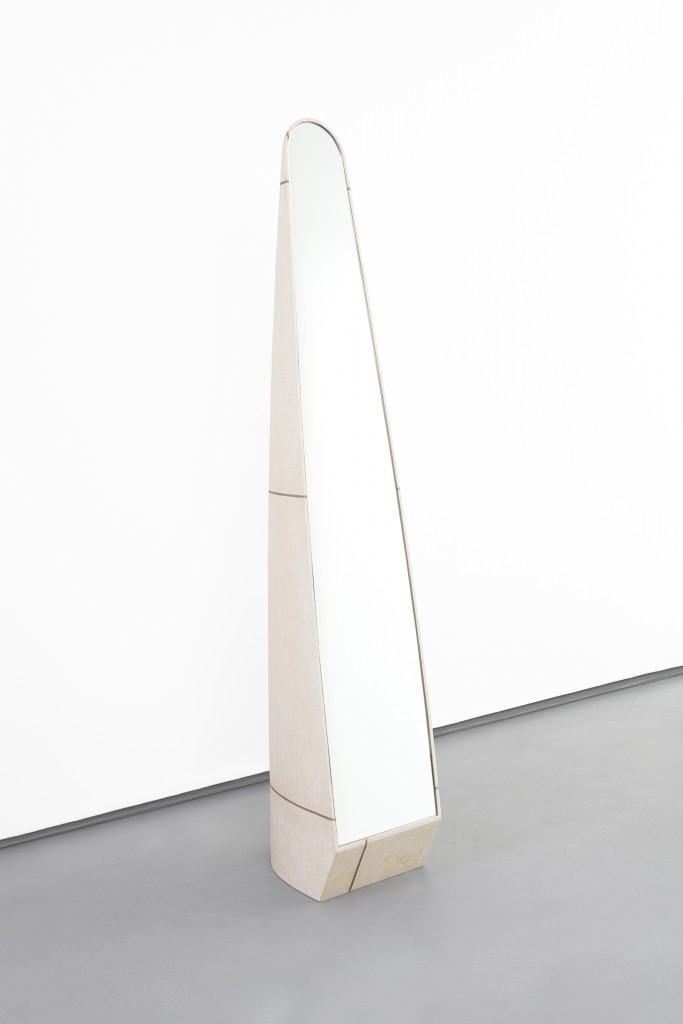 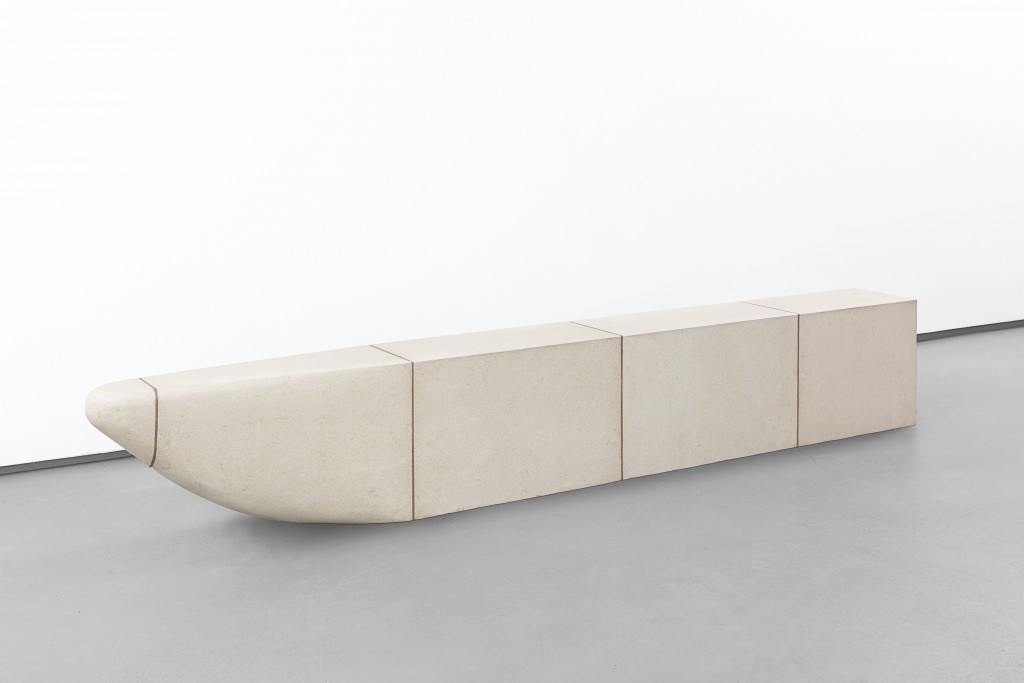 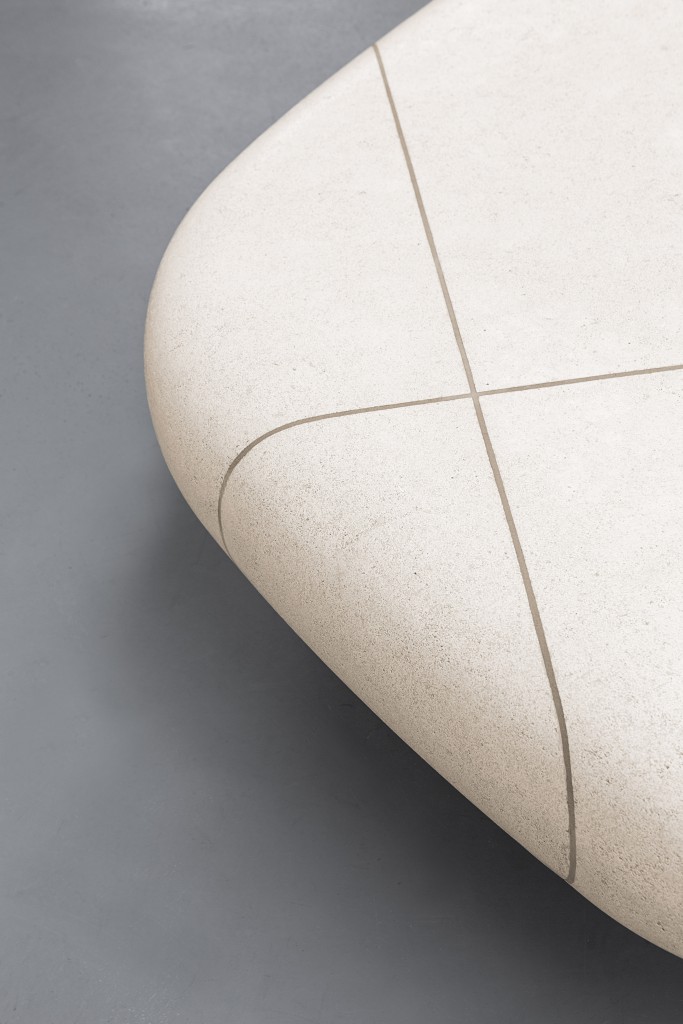 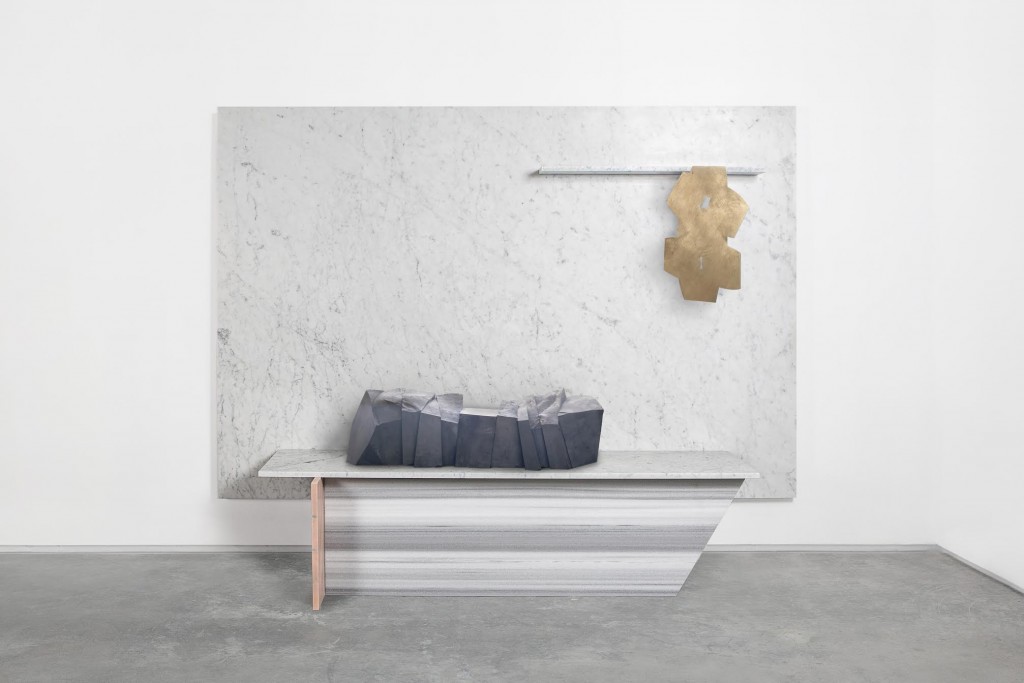 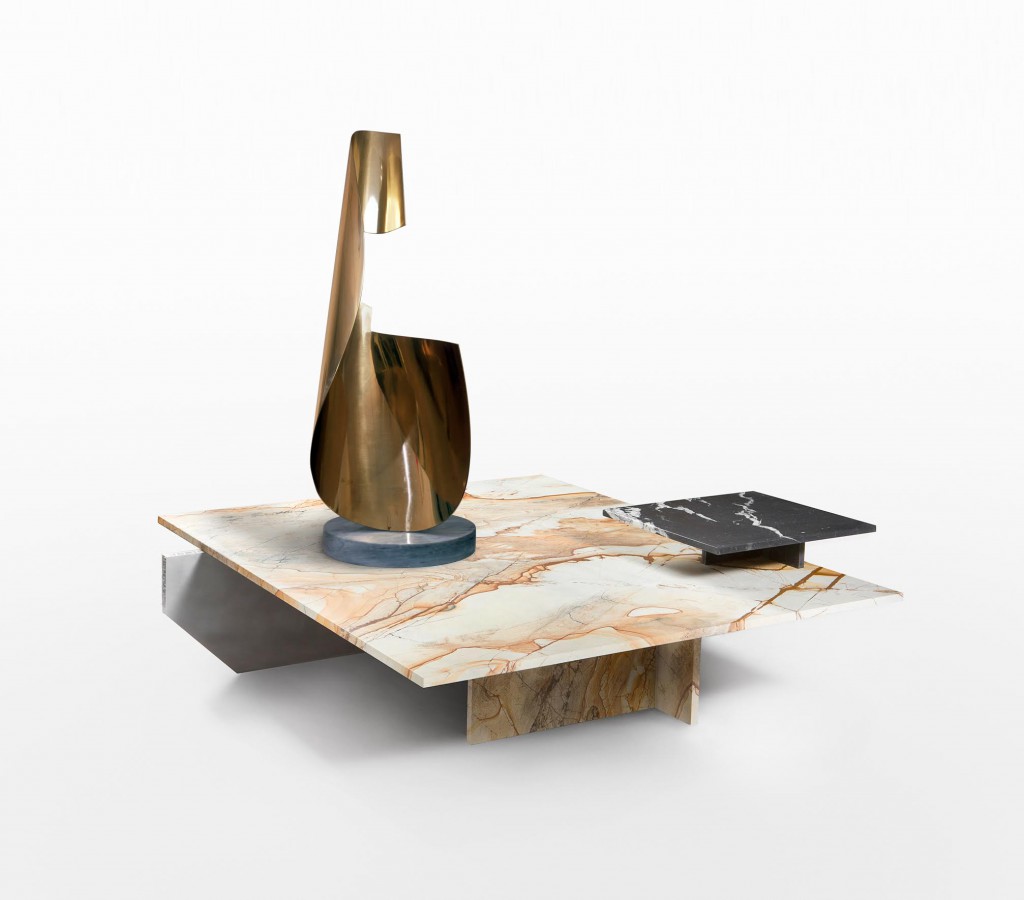 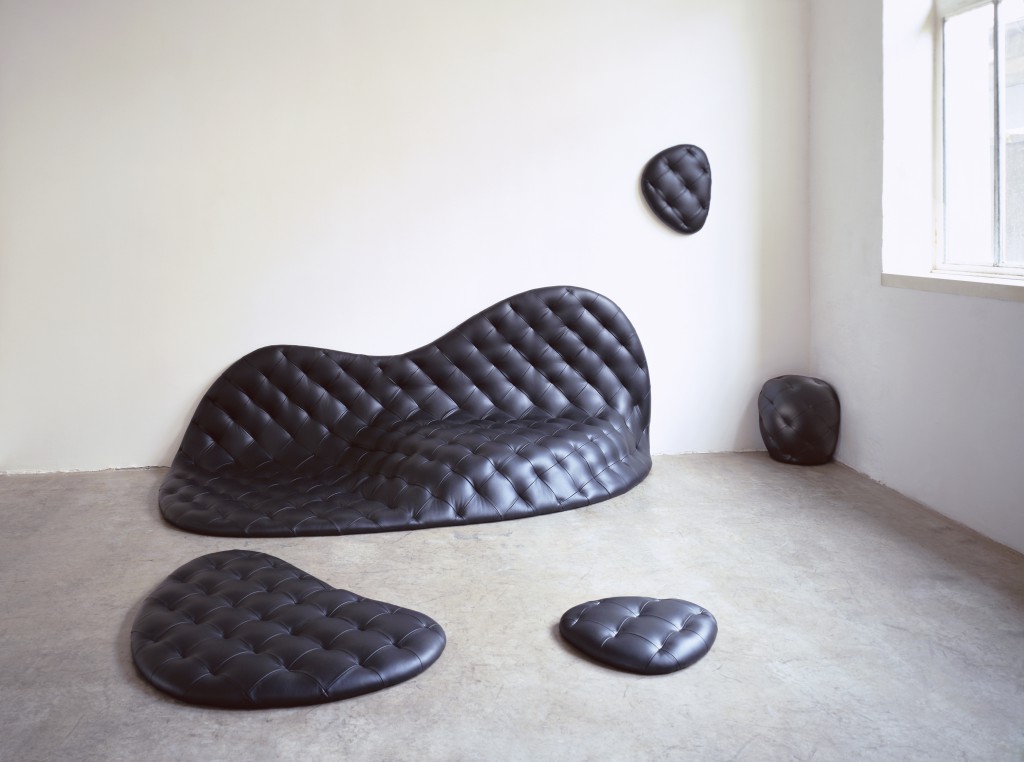 Stadler’s vast Pools & Pouf! (2004). The Chesterfield exploded molecules are invading the space as galaxies and atoms to meet up with Noguchi’s explorations of what might be applied to our future living 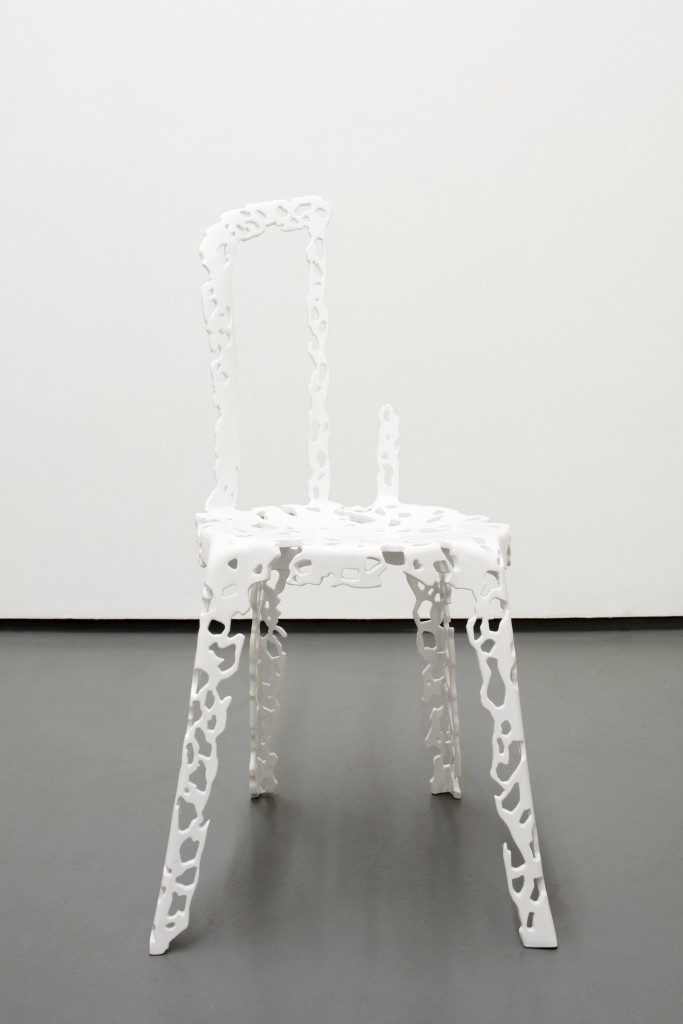 Stadler’s permanently imperfect aluminum Rest in Peace #2 chair (2008) in The Noguchi Museum garden. Erosion and entropy are central to this outdoor installation, oscillating between the unorganic but still comfortable, the minerality of Noguchi’s sculpture and surrounded park 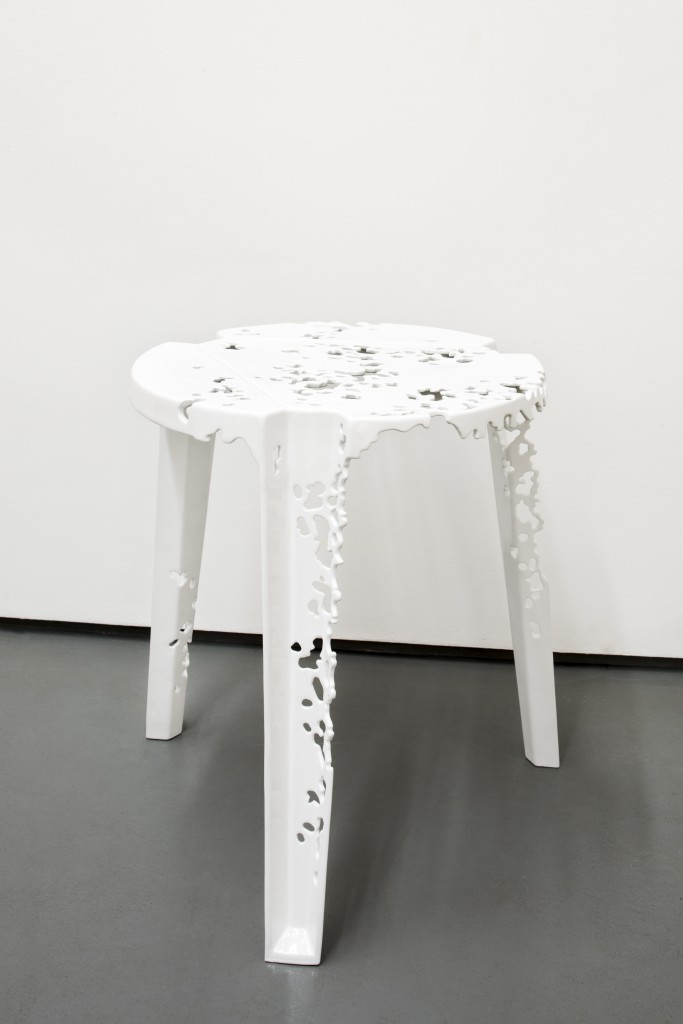 Stadler’s permanently imperfect aluminum Rest in Peace #2 chair (2008) in The Noguchi Museum garden. Erosion and entropy are central to this outdoor installation, oscillating between the unorganic but still comfortable, the minerality of Noguchi’s sculpture and surrounded park

One of the highlights at trade fair, congress and event organizer Ambiente, in the coming year will be the launch of the special presentation Focus on Design, featuring outstanding products and detailed insights of current design highlights in a selected country.