As a teenager, Simone Crestani left high school to dedicate his full time and energy to working with glass. Having grown up near Venice, he did his apprenticeship with expert glassmith Massimo Lunardon and is now a unique creator in his field with exceptional skills. Through his exclusive use of colour, creation of fragile transparent shapes and his attention to detail, every single piece he creates represents to all effects a unique and unrepeatable design. With his personal exhibition, Poetry of Light, opening during Milano Design Week at the Adele-C showroom — TLmag sat down with the Italian glass artist to talk about his young beginnings, philosophy and artistic inspirations.

TLmag: Could you tell us a bit more about how you started?

Simone Crestani: When I was about 15, I was looking for a summer job — and I ended up working at this glass factory near where I lived. I haven’t looked back since really; after that summer I quit school and decided to work with glass full time. I don’t know why glass appeals to me so much; I know that I simply love it — and can’t think of using anything else. For some reason, which I can’t explain, working with such a strange material, which glass most certainly is, comes easily to me — it’s a no brainer!

TLmag: How is glass a strange material to you?

SC: Because it’s not a standard material. Working with hot glass, as I do, involves so much more movement than most people expect. It’s like learning an instrument, in the sense that it’s difficult to learn once you’re a bit older — so it’s important to start young as I did.

TLmag: How would you describe your philosophy towards making?

SC:  I always say that before being an artist, or designer, I’m a craftsman. I’m connected with my material. When I create a new piece, I tend to follow my instincts. It’s a very primal feeling, in a way: everything I create, I make because I like it — because I’m interested in them. As I start working, I look at the whole object; the context in which it’s created, for which it’s made, its inspiration, and its shape. I also make them because I know that only I can do it — by myself — and create it exactly as I want to. I also always aim to use complicated techniques when creating new works, because it’s important to keep a technical component on my projects. It’s something that lets me, and my work, continue to evolve and move up another level.

TLmag: I think nowadays people are focusing more on more on the craftsmanship that goes into their objects. Why do you think it’s becoming so important right now?

SC: Good craft has always been connected to good design. The new generation of craftsmen is learning how important it is to learn how to create something that is 100% created by themselves, without the help of others. You, and only you are the direct producer of your pieces. That’s how you can become really competitive with prices and the works that are created end up being much better quality because of it as well.

TLmag: For Poetry of Light you collaborated with Adele Cassina – founder of the furniture and accessories brand Adele-C – to create their new collection ‘Rain’. What was that like, especially since you work so independently?

SC: I just want to be clear that I never create work for other designers, but rather collaborate with them. Having said that, I also don’t often collaborate — but Adele and her brand gave me the physical and creative space to create these new works in this exhibition, as well as this new collection. Rain is made up of vases and small table containers and was made specifically with their brand in mind.

TLmag: Nature and Japanese Art seem like common fascinations in your works, especially in the series titled ‘E-sumi’. Why do you think you’re drawn to these themes?

SC: First I have to say that I’ve never been to Japan — which sounds really strange— especially considering this whole series is inspired by sumi-e. They are these refined, beautiful paintings that feature a sequence of a few, delicate brush strokes of black ink on rice paper. In ‘E-sumi’ I tried to emulate these paintings — creating an outline effect on these otherwise clear sculptures that reinterpret the mating rituals of the animal world with a bit of a poetic gaze. I’m mainly fascinated by the way that Japanese culture approaches nature through their art — which really focuses on the relationship between man and nature. I think that’s why I feel so connected to them.

TLmag: I don’t think it’s that strange — Van Gogh also never went to Japan but was still hugely inspired by Japanese prints. Do you think you’ll ever want to visit though?

SC: I don’t think so, I’ve romanticised it to the point that I think I can’t visit anymore. What I experience from looking at their art could very well be just my interpretation of it, or maybe my version of reality instead of what is “real” — I fear it will only kill the dream.

TLmag: Many of the pieces in this exhibition showcase the almost poetic kind of sculptural glass work that you’re known for, combined with the added element of built-in LED lights — thus the name Poetry of Light. Could you tell us a bit more about the process you went through to create these light sculptures?

SC: The most important aspect of this exhibition was the creation of these sculptures in which the lights were a seamless part within their design — and not just another added element. As we first started researching how to create this, we found out that the only viable option was LED lights, which was very difficult to work with at first as we wanted a warm, candle-like kind of light; the total opposite of LED. After some trial and error, we found out that if we used brass, parchment and borosilicate glass around the LED, we could manipulate to create a more natural kind of warm colour tone and effect that we wanted. It was a challenge, but as I said: I like to challenge myself.

Poetry of Light can be viewed in the Adele-C showroom at Via Marsala 11, Milan from the 9th to the 14th of April; opening hours are 10 AM to 1 PM and 2 to 6 PM. The inauguration of the exhibition will be held at 7 p.m. on Thursday, 11 April. 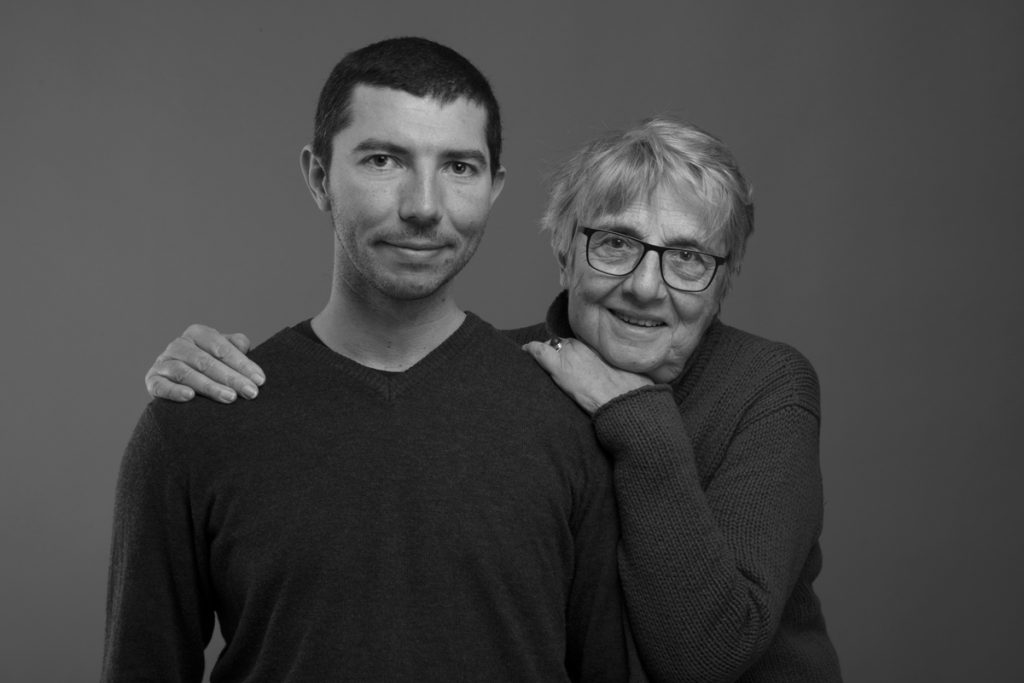 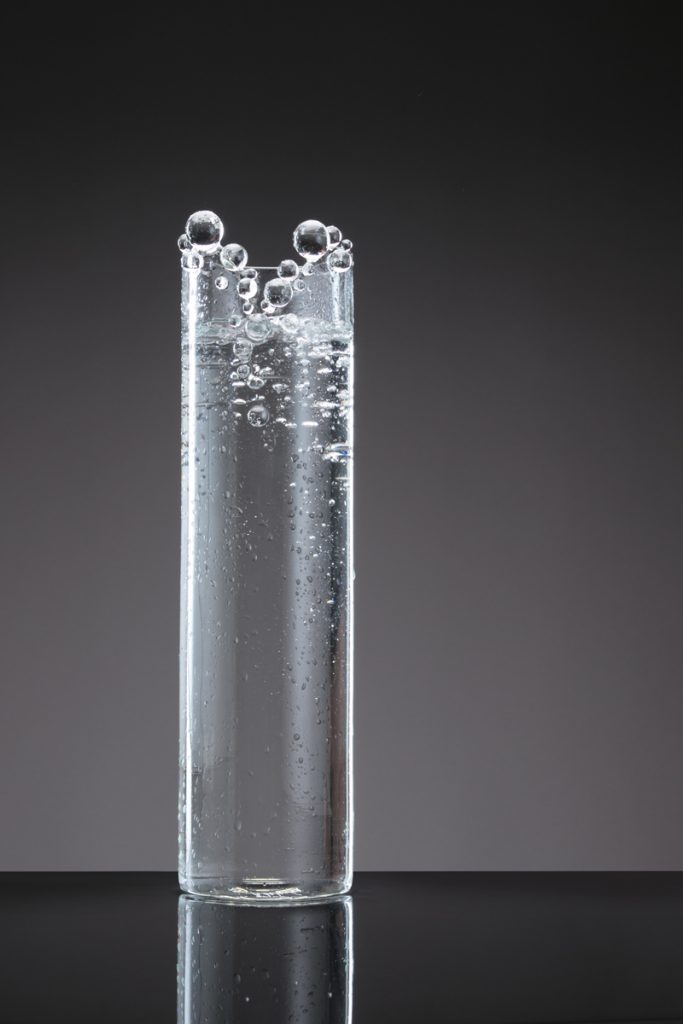 Clear Rain - designed for Adele-C and part of the company’s 2019 catalogue. 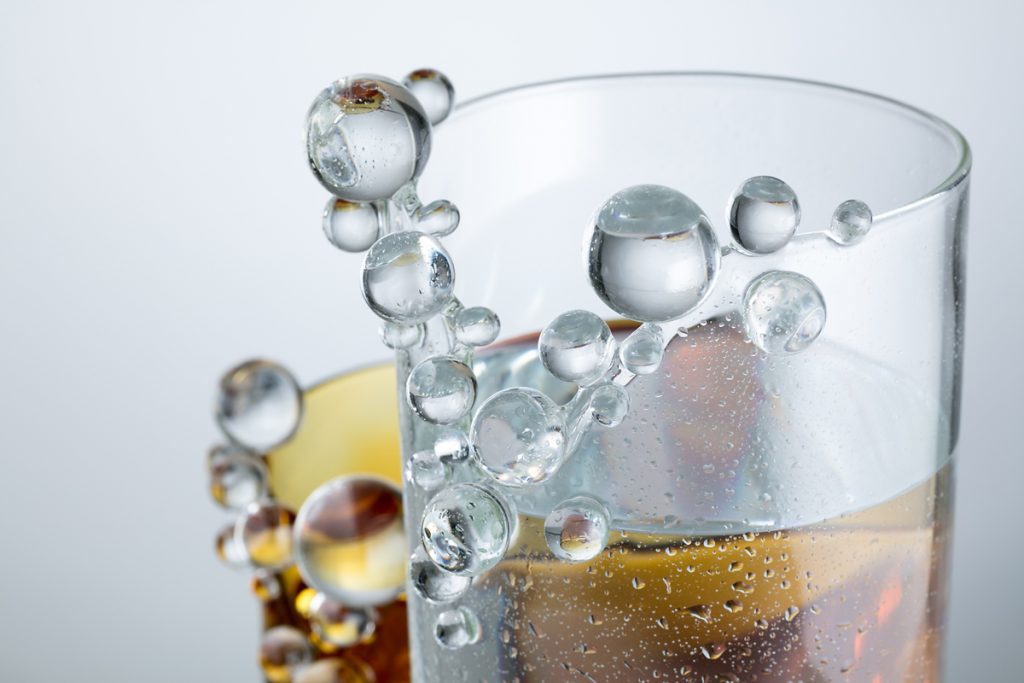 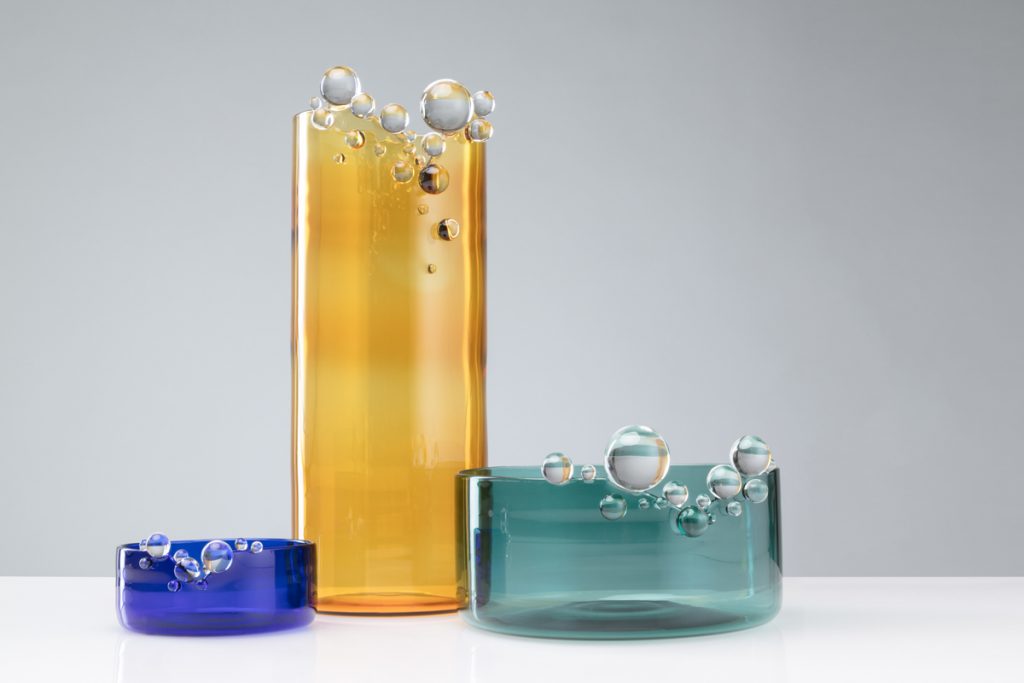 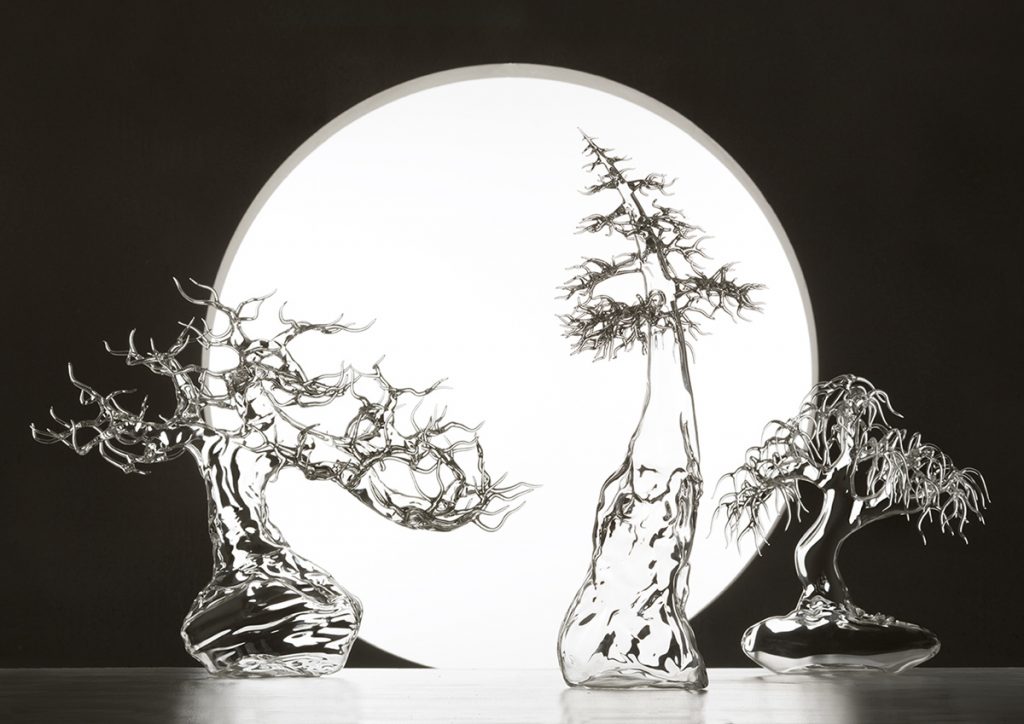 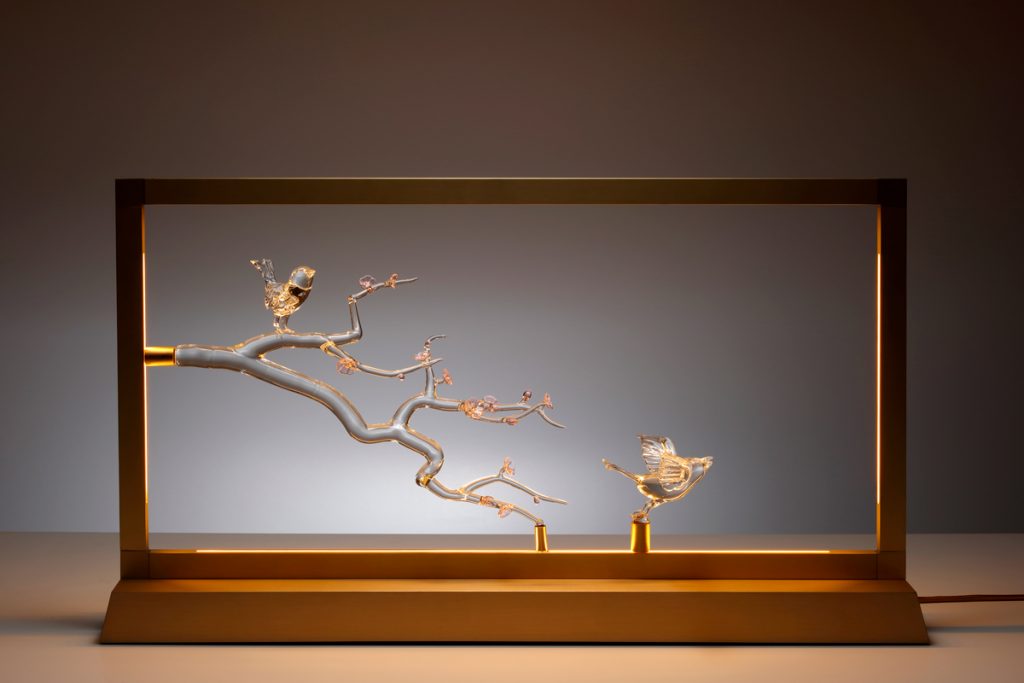 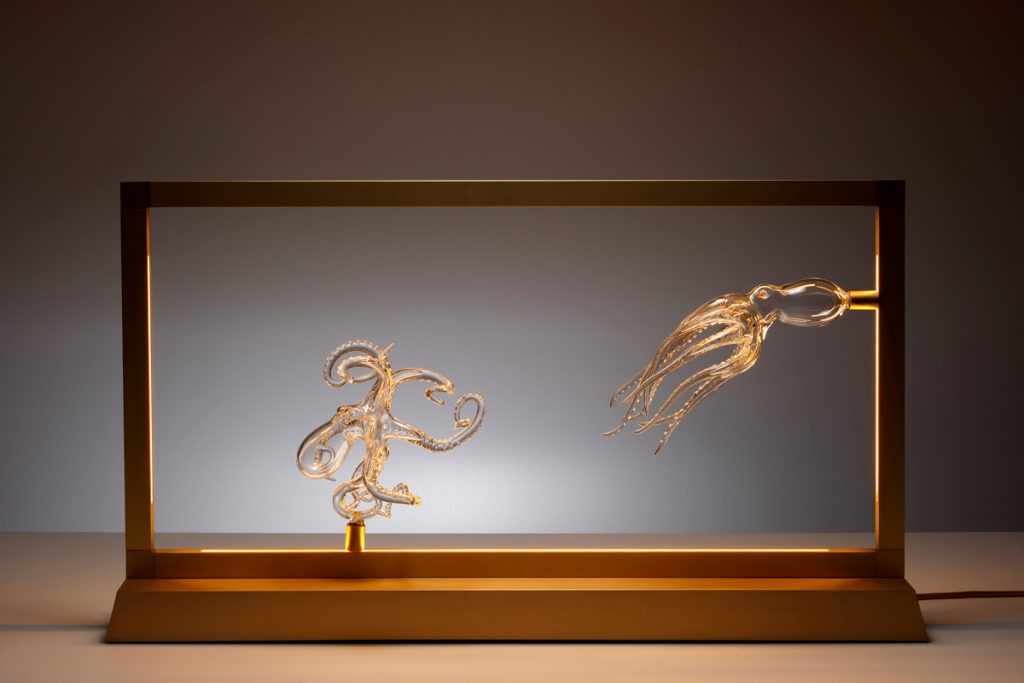 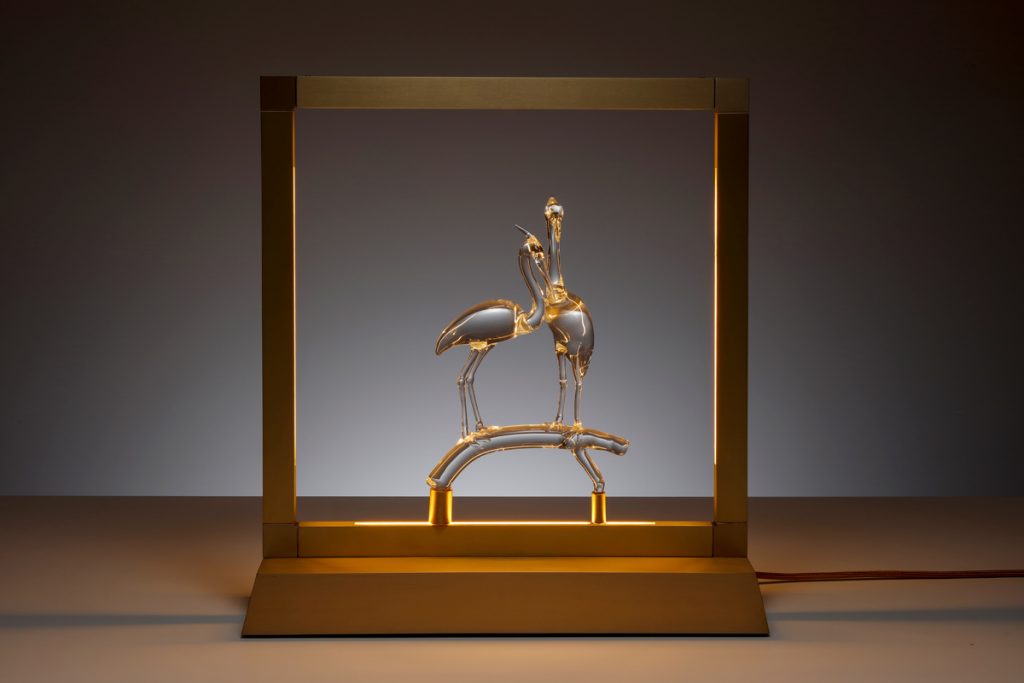 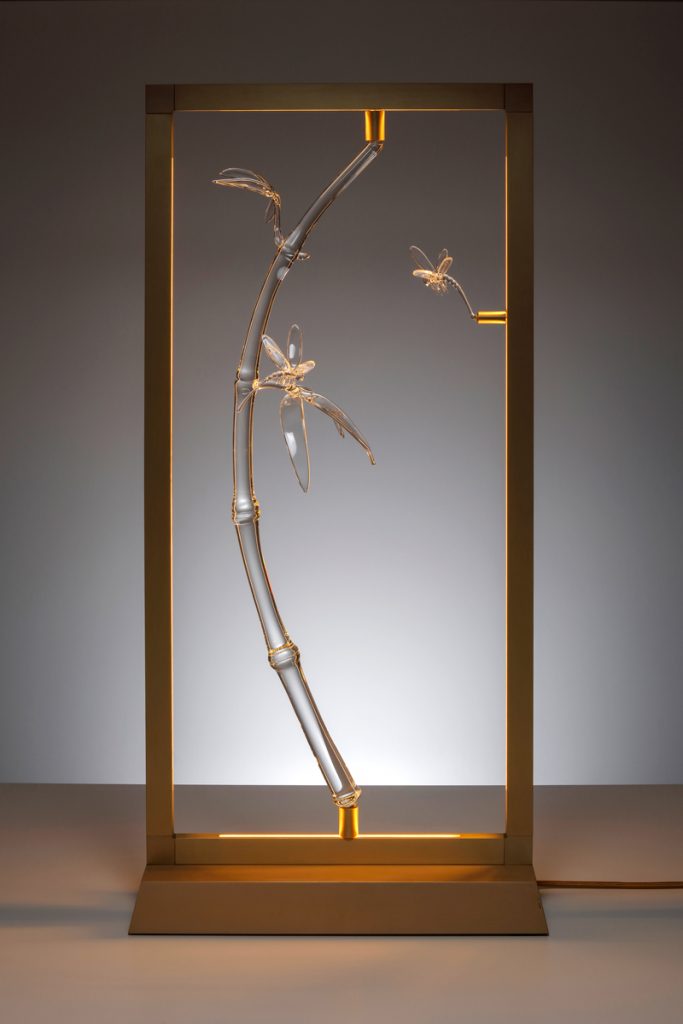 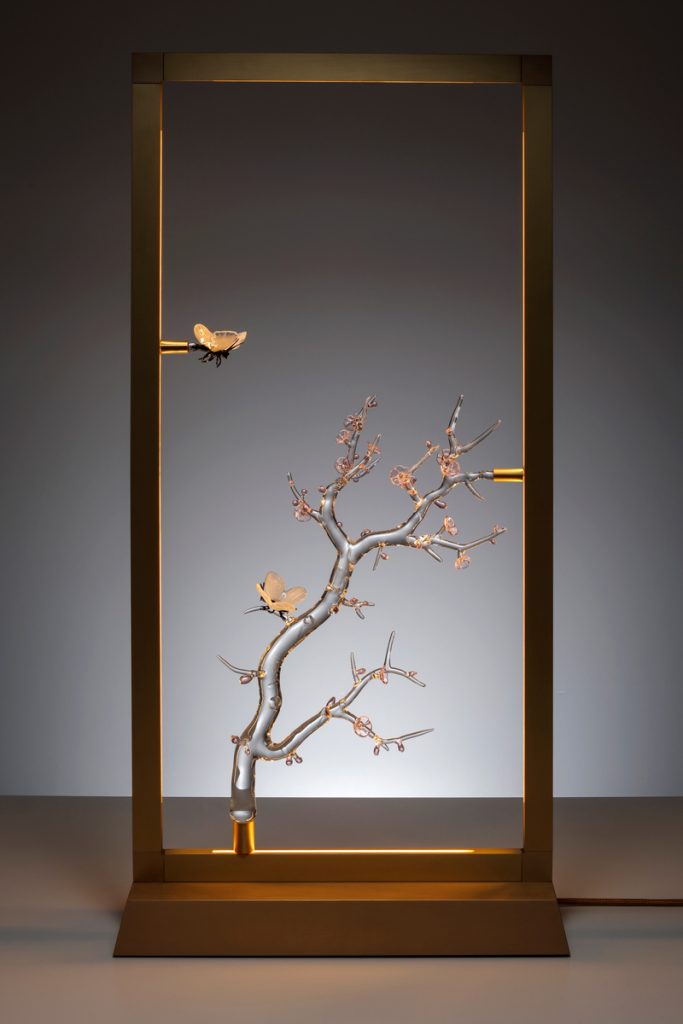 Part of the series 'E-Sumi'
‹ Back