It’s no secret that Swedish visual artist Åsa Jungnelius is a master of glass. Just look at her earlier works, like “I Like Your Hairstyle”, in which she carefully shapes the material into smooth and glossy shapes, often phallic, in an effort to engage people to go beyond the decorative aspects of her materials. Her works may be crafted with a strong sense of materiality – but they aim to tell a larger narrative. The same goes for her more recent exhibition at Stene Projects;  a gallery that describes its goal as wanting to be an “open and module-based democratic space in a digital age”.  For ‘Open’, Jungnelius has introduced a new dichotomy within her sculptures as she combines her ever-faithful glass with materials like marble, bronze, brass, nylon, neon, old wood and even a taxidermy rabbit.

Through the dramatic differences in material that the Swedish artist has selected, the works refuse to be seen simply as something “beautiful” and force visitors to look into the stories behind them. On the floor of the space, a sculptural work made out of Carrara marble — a material that has been used since the times of Ancient Rome — calls our attention. The title of the work, “When you spit on a rock it gets wet”, borrows its name from an old saying which questions what would happen if you spat on an ancient stone that for centuries had symbolised wealth and was associated with extraordinary craftsmanship. Hovering over this rounded sculpture, the word ‘Open’ dangles in the middle of the space made out of a striking neon light. Held in mid-air by a linnen thread together with two rudders, wicker and a seat-belt, the work (and the exhibition as a whole) is described as a dense narration of humankind’s affinity with stone materials: how they are perceived as being able to last forever but have simultaneously been disregarded for newer and shinier materials. The exhibition is vibrant and unflinching in the way that it is exhibited and was created, and pulls out discussions of not only what kind of materials we deem worthwhile but what their cost is in the long-run for humankind: how did we end up where we are today, and how is production looked at in the late-stage capitalist reality that we’re living in?

‘Open’ was on view at Stene Projects in Stockholm until October 25th, 2020. 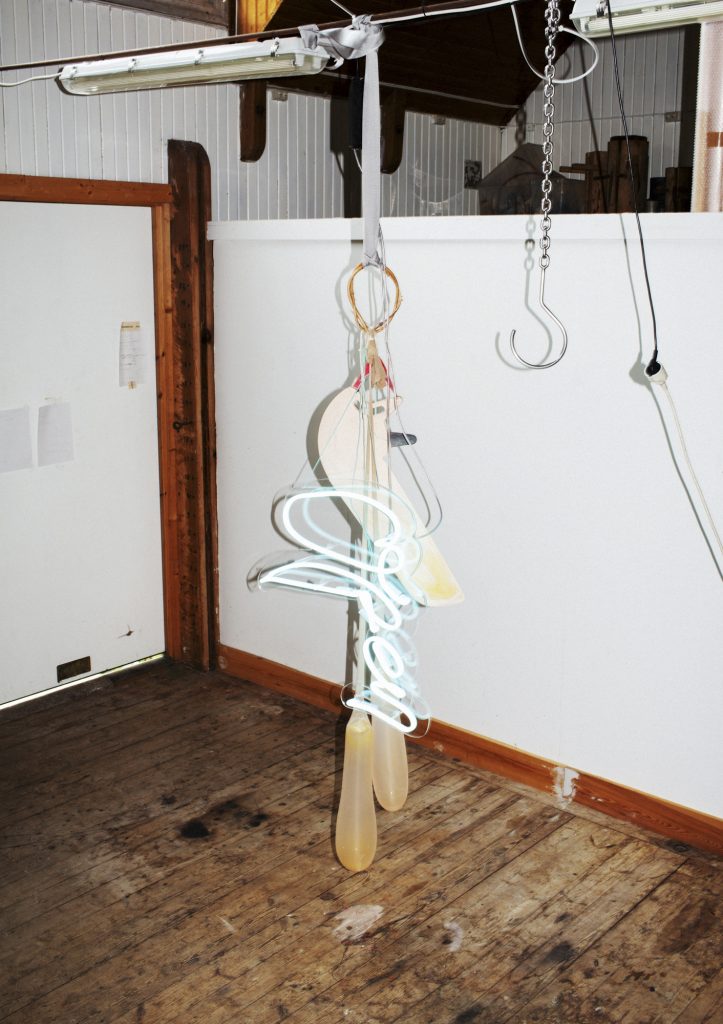 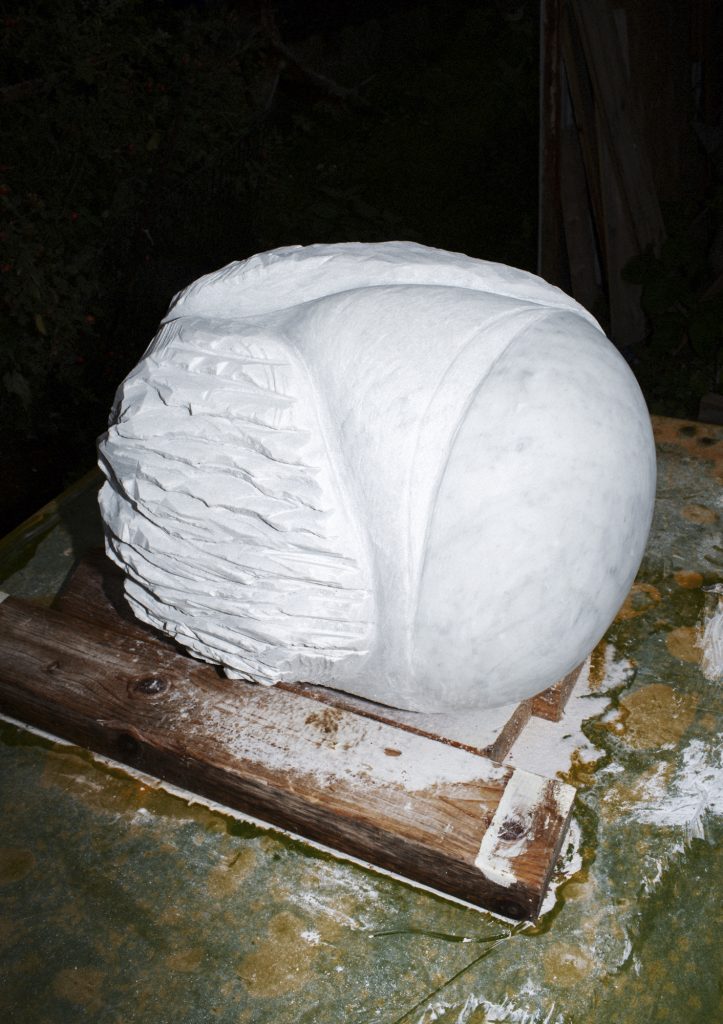 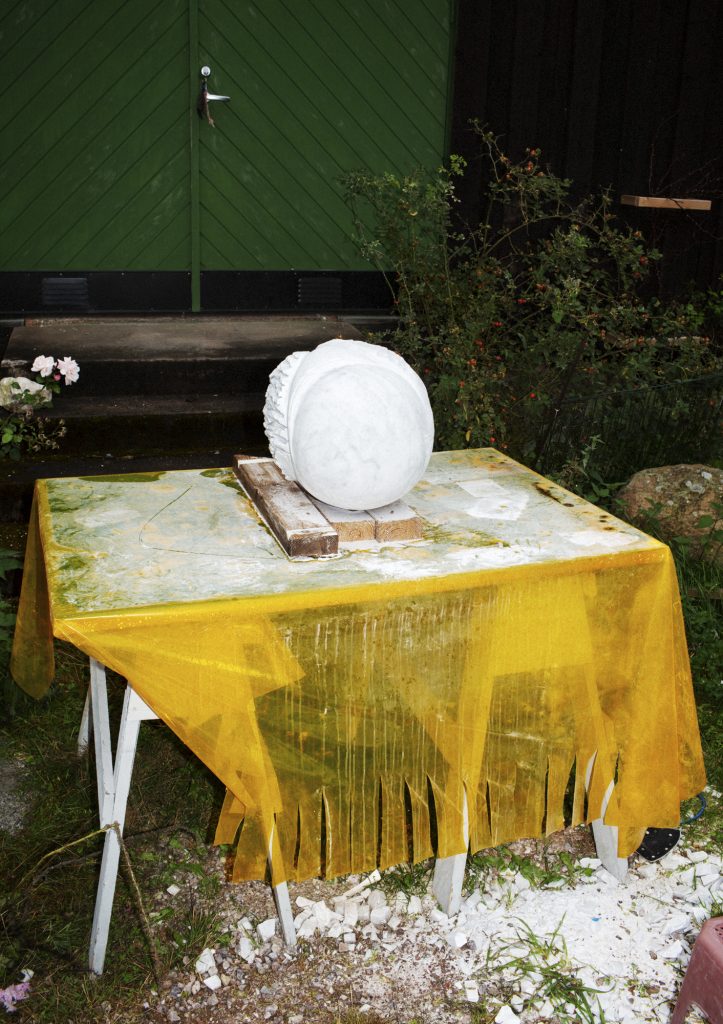 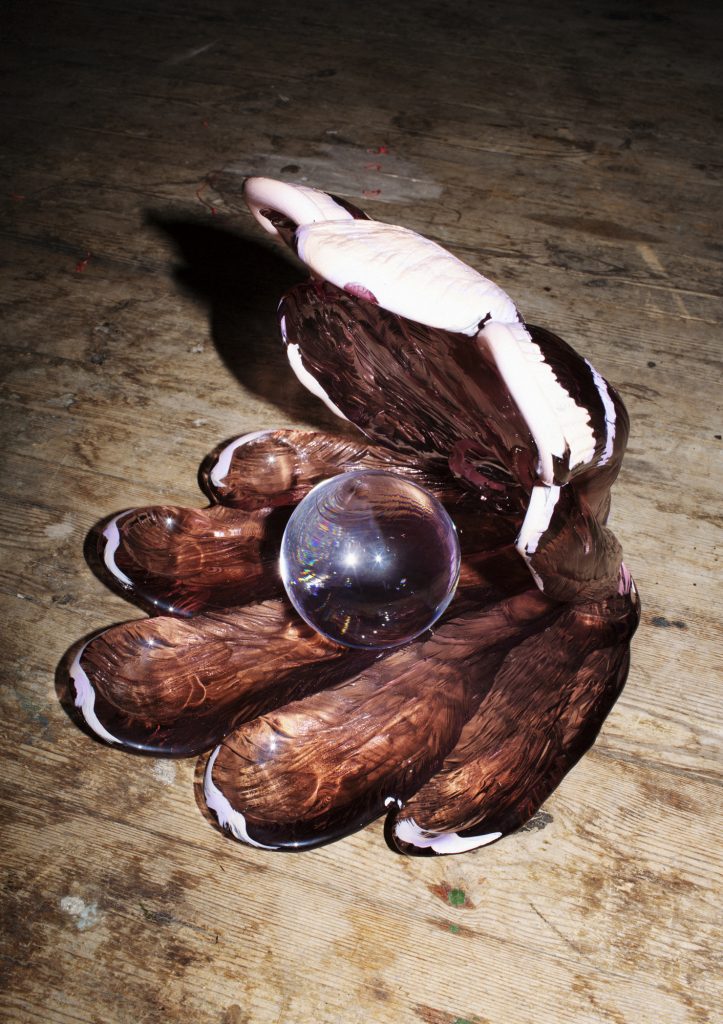 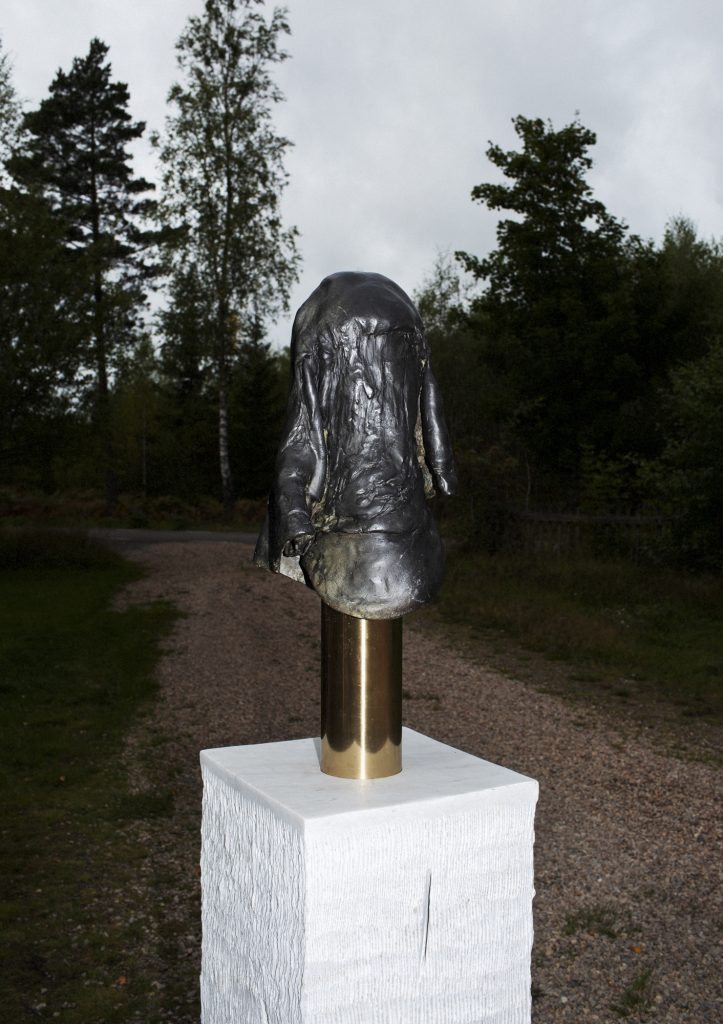 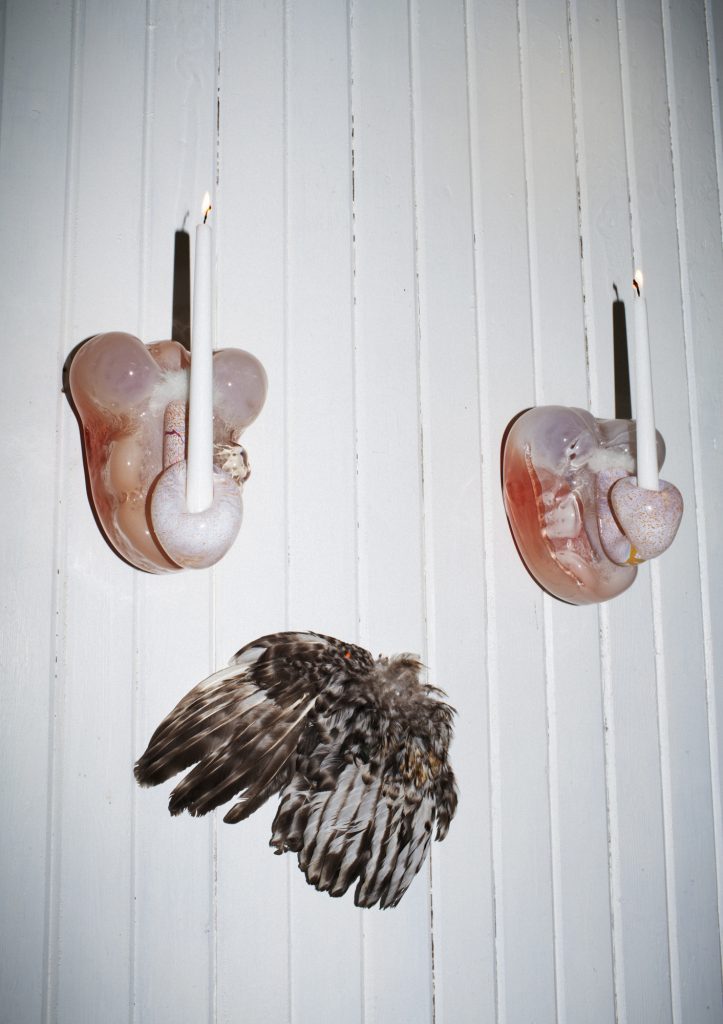 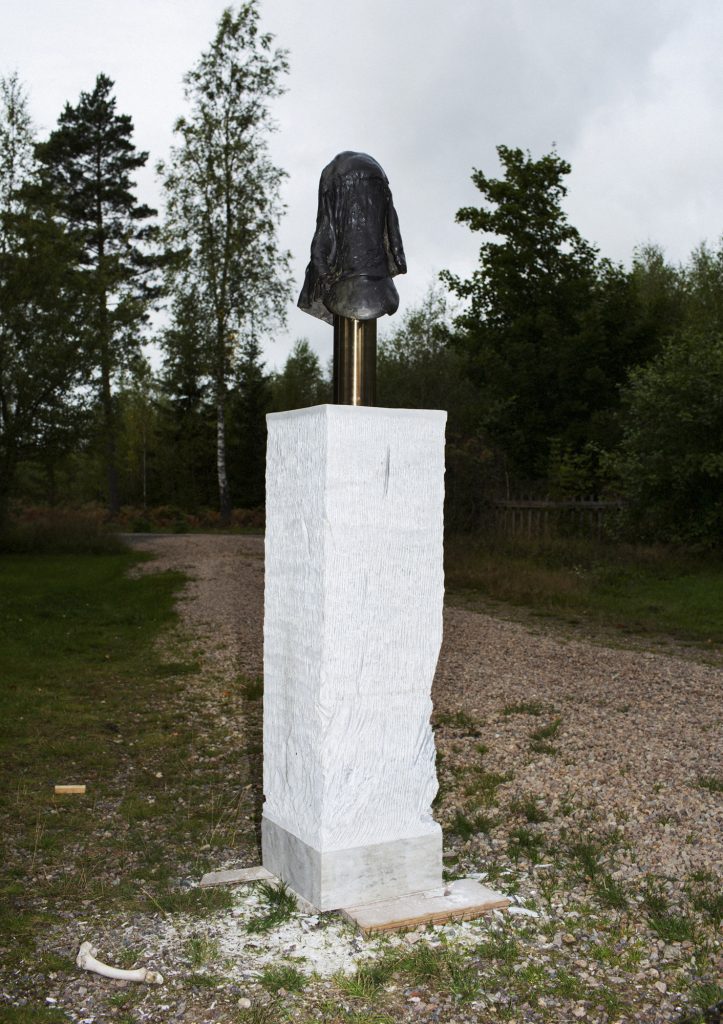 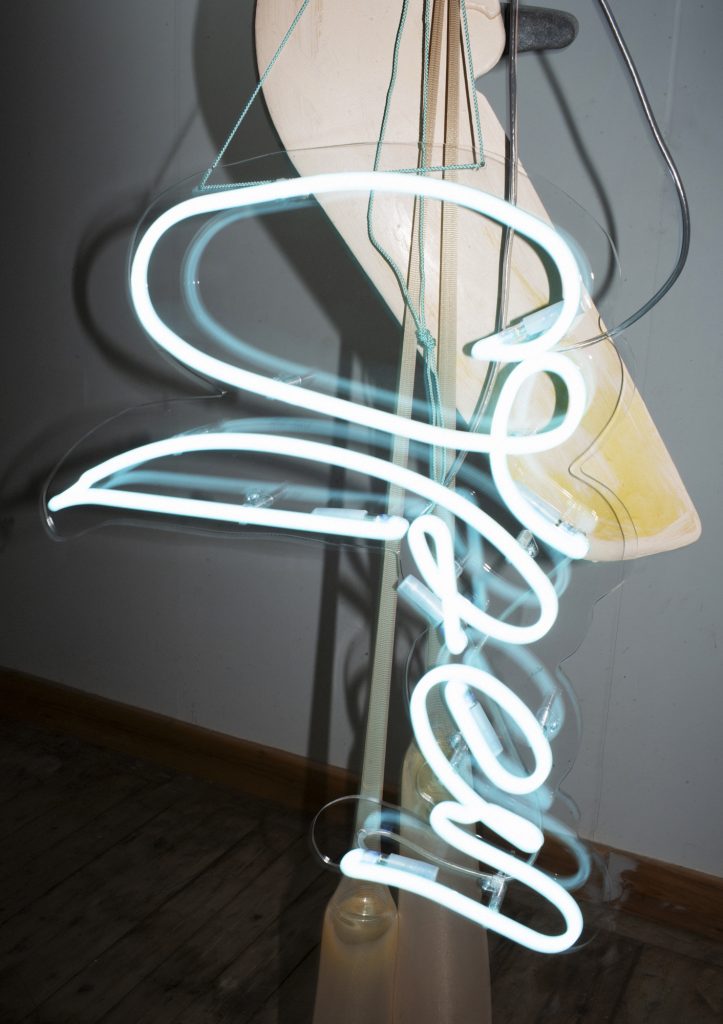