In the heart of Amsterdam we find Felix Mertis, a location that has a history of serving a society of scientists, artists and thinkers to come together in The Enlightment. Over decades, it’s become one of the most important monuments of the city. Today, the interior of the historic landmark is designed by i29 who approached design studio Belén to investigate and develop the textile wall coverings of the restaurant and the entrance of this historical building.

In the heart of Amsterdam we find Felix Mertis, a location that has a history of serving a society of scientists, artists and thinkers to come together in The Enlightment. Over decades, it’s become one of the most important monuments of the city. Today, the interior of the historic landmark is designed by i29 who approached design studio Belén to investigate and develop the textile wall coverings of the restaurant and the entrance of this historical building. Throughout the process, the approached design studio came to realise there are many similarities with that of the present time: one where we question our ways of thinking. Felix Meritis is the physical embodiment for the curious mind; a hub of creativity, ideas and cross-overs, and Belén immediately saw the potential to reference the history of this exceptional building in the execution of the textile walls.

Refusing to look at monuments as obstacles but rather starting points, Belén sees space as the offsite for stories and histories. It is also important to note that the design studio looks at space as the coming together of the history it holds as well as its presence. This led to Belén designing two installations of textile walls: in the entrée and the restaurant: ‘Physical Time’ and ‘Scanning the Sky’. Delving deeper into the occurrences that have taken place in these rooms, as well as how the lifespan is experienced within the building, they sought to explore layers of colour and material and how these form the soul of the environment.

The first designed textile wall is called Scanning the Sky and is situated on the roof of Felix Meritis. A location which historically provided space to study the sky, often by night. On January 18th 2018, after a heavy storm (sun follows rain after all) photographers Erik and Petra Hesmerg captured in 360o the slightly dramatic, yet, clear sky. These stills formed the textile walls of the restaurant. The restaurant of Felix Meritis is a vast space, and has only two windows on the front side. A space in which one easily spends a few hours, the design studio drew on this space and felt its open and dazzling atmosphere. Inspired by this, the studio opted for mid blue as a colour, wanting to resemble the hue of an infinite sky. The tactile walls were stretched with ‘sky’, perceived as open windows offering a clear view. Herein, Belén opted for the idea of walls being borderless and see-through.

The design studio was inspired by the drawing room – a room that was lost due to a fire years ago at the Felix Meritis. They dove into the Rijksmuseum archive, which contains many etchings and paintings that were made in the Drawing Room (the room itself often visualised in these). The studio chose an etching by artist Reinier Vinkeles to translate into a textile wall. The etching is tufted in two colours – a technique that is generally applied to rugs. By opting for light and dark green, the textiles match the green hues of the i29 developed interior. The back of the panels depict a clearly recognisable etching. Yet, it is not visible. The front side is an abstract representation of the etching due to the threads being 10 centimeters long, each one poised in their individual manner. The result becomes a physical manifestation of time. The vertical line is emphasised by the hanging threads. Because people spend a limited amount of time in this space of the Felix Meritis, “the vertical” emphasises the desired atmosphere. The textile walls ask for human touch and can be in fact, felt and adorned.

All images of the works by Belén in Felix Meritis, by Ewout Huibers. 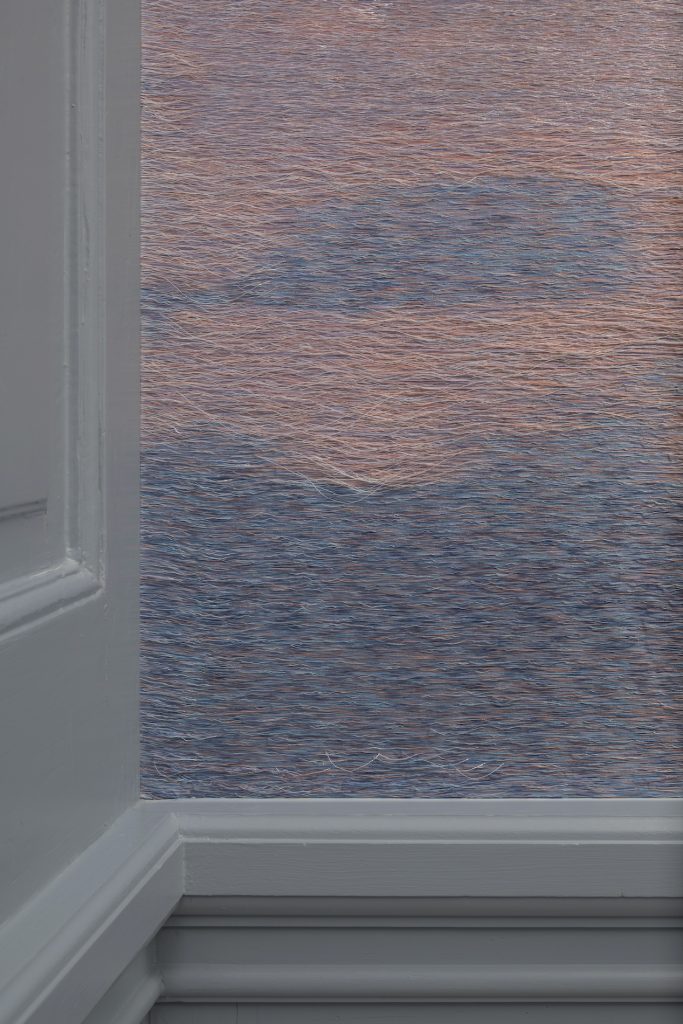 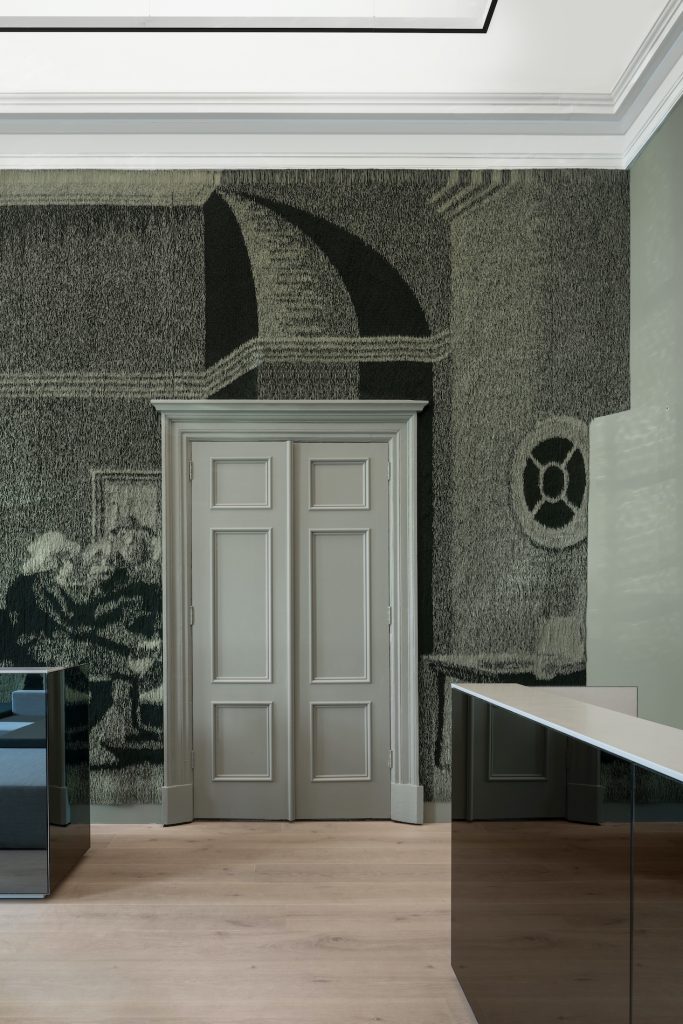 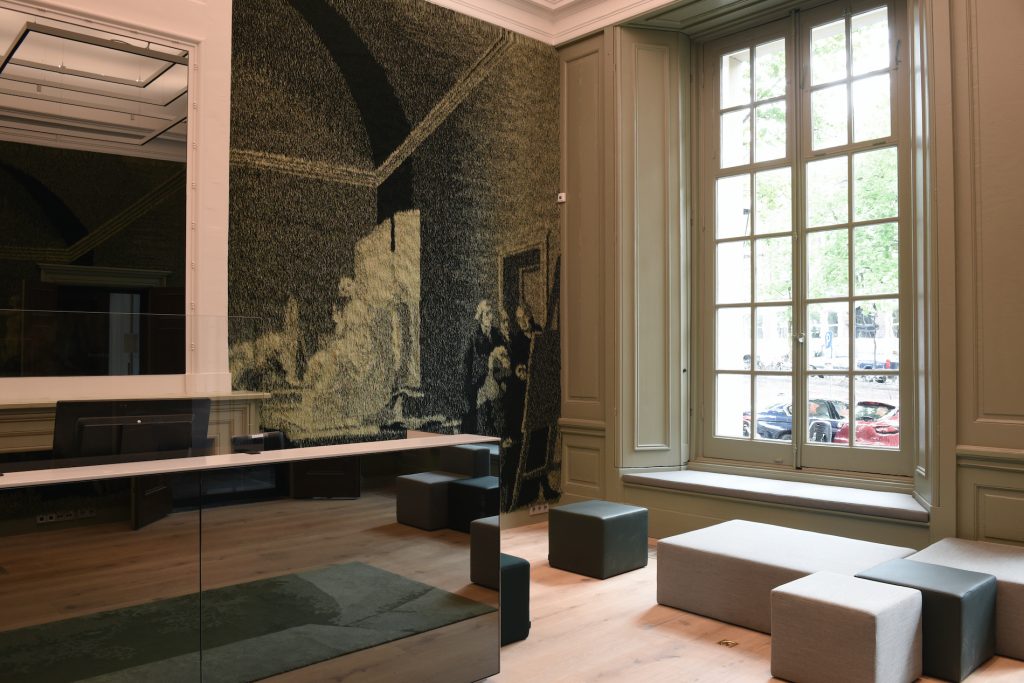 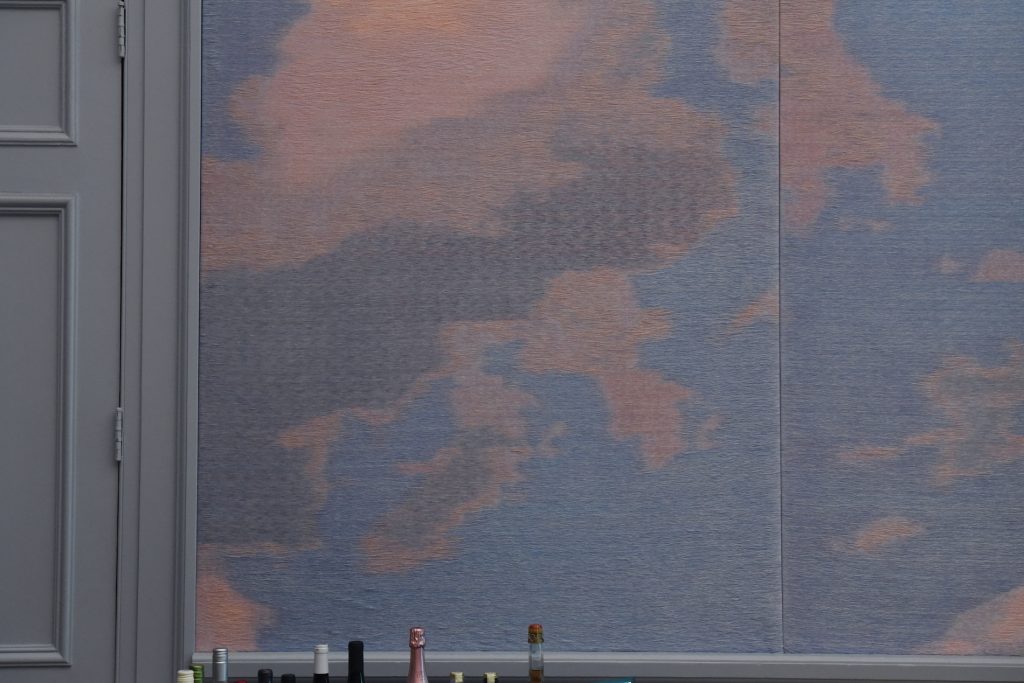 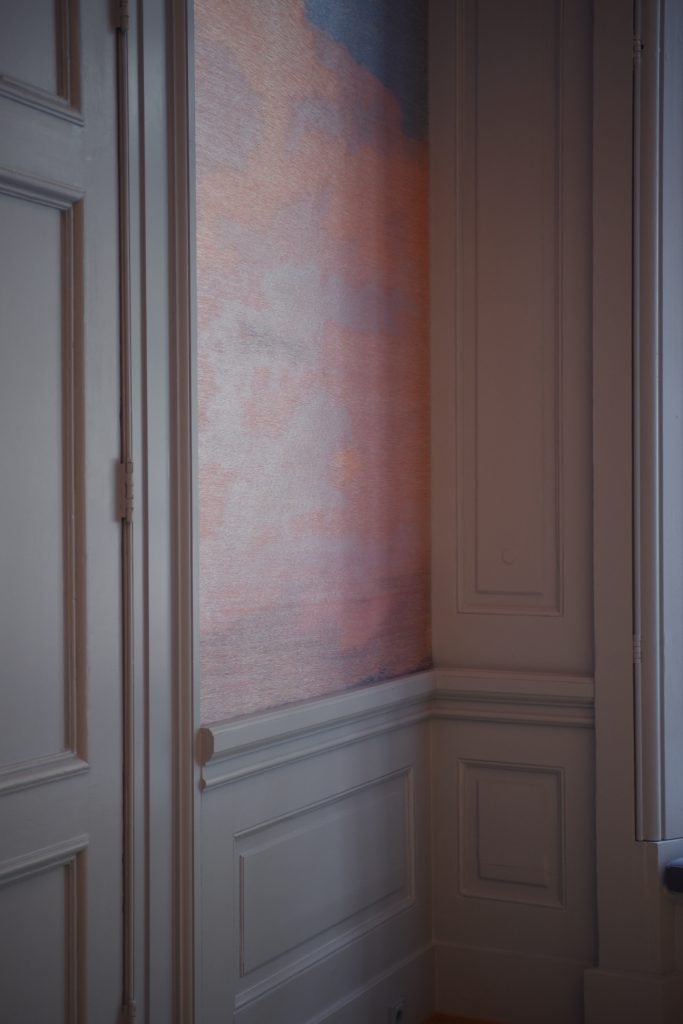 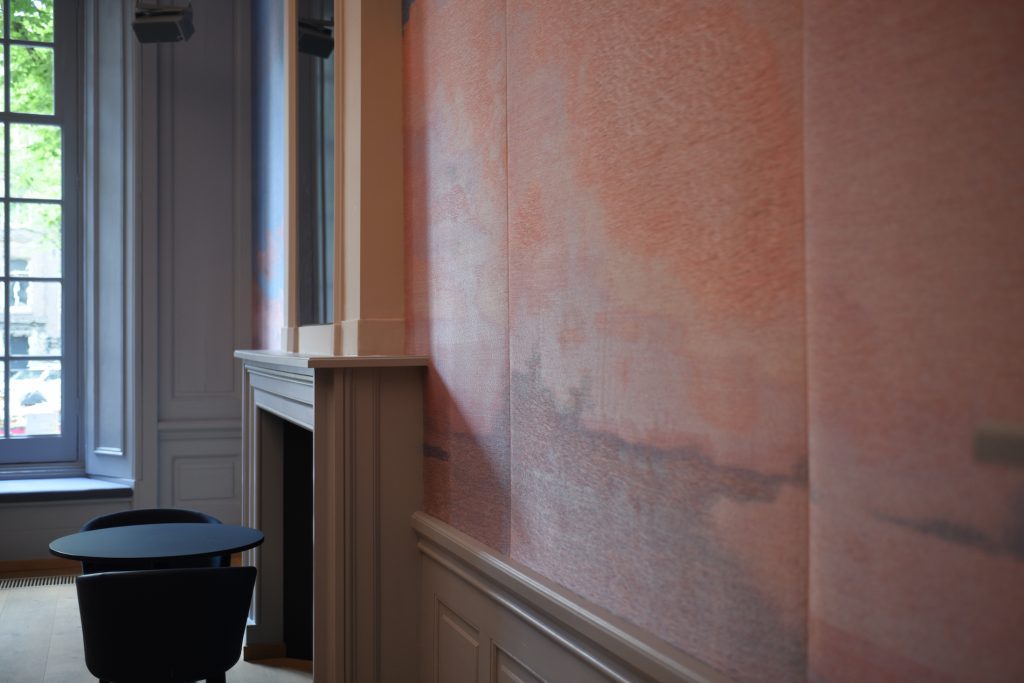