With his bare hands, Bosco Sodi digs deeply into the earth, uncovering and bringing to the surface the inner essence contained within the raw matter he uses to create from. Coarse and intensely-coloured textures reflect their organic beauty, evoking both a sense of impermanence and imperfection. Sodi’s works are volcanic with spirituality and emotion. Challenged by his materials and by exploring all of the possibilities they present, the artist maintains a ‘non- anthropocentric’ vision, embedded into an understanding of the intrinsic interrelatedness and interdependence between the human being and the earth itself. His creative processes and gestures are vigorous and always left open to the winds of unpredictability. Sodi executes briskly, often without stopping, and then exposes his works over longer periods to extreme environmental conditions. It is from here that those cyclic ideas come into play: where creation always leads to a destruction of sorts, and destruction comes full circle back to creation. It is in the presence of destruction that creation is given its value, the end without which there would be no beginning.

Aptly, “What goes around comes around”, is the title of his latest monumental exhibition at the Palazzo Vendramin Grimani, part of the series of the collateral events at this year’s 59th Venice Biennale.

TLmag: You appear to be inherently attached to nature. How would you describe your relation to the natural elements, to the organic and raw materials you work with?

Bosco Sodi: When I began to work with clay, I realised immediately that we have it in our DNA. A little bit like fire, it’s in our DNA. My grandfather had a house outside of Mexico City and we used to spend almost every weekend of my youth walking together through the forest. I have always felt very deeply connected to nature and always maintained an attraction to organic objects – a feeling that has drawn me closely to “wabi-sabi” philosophy and aesthetics. As an artist, working within the natural environment and directly with the elements evokes something I am fundamentally related to. It also brings one to an unpredictable outcome, something entirely unrepeatable and unique.

TLmag: Gold has a particularly unique relation to light and colour. What does it reflect in your view?

B.S.: Gold has a lot of connotations. It evokes a holiness, a purity. As a Mexican, I see it as part of the Conquest, it links to Colonialism. It is fascinating how one metal, more than any other, has had such a powerful influence on humanity. It makes me reflect immediately on how a colour, a metal has affected historical context.

TLmag: Have you ever used gold in the creation of an artwork?
B.S.: I often go rock-hunting in a canyon in Mexico. I am very drawn to the shape of rocks and I select them for their shape. I don’t ever cut them, I keep them as they naturally are. I have often undergone a process where I have glazed some of these found rocks with red, then used a 17-carat gold glaze over the surface at 690 degrees. The concept here is to transform (what might be considered by most) a mundane rock, sculpted through time by the natural elements, into an object of desire.

TLmag: I sense through your Mexican roots, the colour gold can link symbolically to the sun. If metals are considered to have an affinity with the planets, represented as a material expression of living cosmic energies – then gold has to be the “sun-metal”. This makes me think of the significance of the sun, the sun gods, and the sun temples in the Mayan culture.

B.S.: The cycles of celestial bodies, particularly of the sun, form the basis of the Mayan calendar. My parents often took me to visit archaeological sites in Mexico. One which has had a significant influence on me to this day is the site of the ‘stelae’ – these tall stone rectangular slabs with sculpted or inscribed surfaces. I love the materiality of the stela. It is neither a flat painting nor a stucco, instead it’s a rectangular rock with a motif and a texture. These were monuments created by the Mayan civilization – for whom gold was a connection to the other world.

TLmag: Sculpture is one of the oldest arts in Mexico. Perhaps one of the most famous works of Mexican sculpture is the monolithic “Piedra del sol” or the “Aztec Sun Stone” housed in the National Anthropology Museum in Mexico City. What was your reaction to this when you saw it for the first time?

B.S.: It made an immense impression upon me. It is huge, and emits such a special energy, even a bit of a dark energy at the same time. This is, quite honestly, one of the most beautiful museums in the world. Every time I go to Mexico City I try to pay a visit.

TLmag: One of my favourite poets is Mexican Nobel prize laureate, Octavio Paz. His poem “Sunstone” written in 1957, pays homage to this sculpture. And this particular poem is referred to as a ‘circular’ poem based on the Aztec calendar. It consists of a single cyclic sentence. It contains not one full stop, only commas, semi-colons and colons. It even ends with a colon.

B.S.: I remember once, I had worked non-stop all day with my assistants and we were so tired after making this huge red sculpture. I wasn’t entirely satisfied with its outcome so I decided to leave it outside for fifteen days. After this, the artwork became one of the most beautiful I ever created. To let the elements dictate the outcome exemplifies the organic nature at the heart of my process. I love the challenge of the materials, the accidental learning process and allowing for the works to continue to change over the course of time.

TLmag: The first six lines of Paz’s “Sunstone” poem repeat themselves again at the end of the poem in a movement that “doubles back, and comes full circle/forever arriving”. In a very similar sense, your exhibition, which opens at this year’s Venice Biennale, is entitled “What goes around comes around”. Can you tell me what brought you to choose this particular title?

B.S.: It was a dialogue between myself and the curators. The concept of the show is about how presently, all cultures and humans are interdependent: not just in the exchange or flow of goods, but also in culture and information. We wanted to talk about the exchanges between Latin America and Europe, to show a co-dependence that moves in a continual dance. You cannot see anything as a single entity, single culture, single nation or a single gender, everything has a very complex connection.

TLmag: What are some of the works included in the exhibition?
B.S.: A large variety of works are being shown – from my clay pieces, organic and broken rocks, many sentimental works that I created during the pandemic. Also, I will exhibit paintings I made while I was in residence at the palazzo, in honour of classical Venetian paintings. There are a lot of references to blacks, golds and reds – to cochineal and red carmen, in particular. Cochineal is a pigment that originated from Mexico. It was the second most important export after silver, even more important than gold. It came to Europe and changed classical painting completely. It was a very different red as it was so much more resistant to the sun. The opulent Renaissance style of the palazzo and the raw, organic works make a very beautiful fusion.

TLmag: The theme of the Biennale pays homage to Leonora Carrington’s works that describe a world set free, brimming with possibilities. She embraced transience, metamorphosis and change, and those deeper metaphysical connections that lie beneath the surface of things. In this respect, your works seem to position themselves perfectly within this broader theme.

B.S.: My works try to make a connection. I would like to think that they can give the viewer a tool to better understand the universe, understand ourselves and our relation to other and to nature itself – something I am inherently attached to. 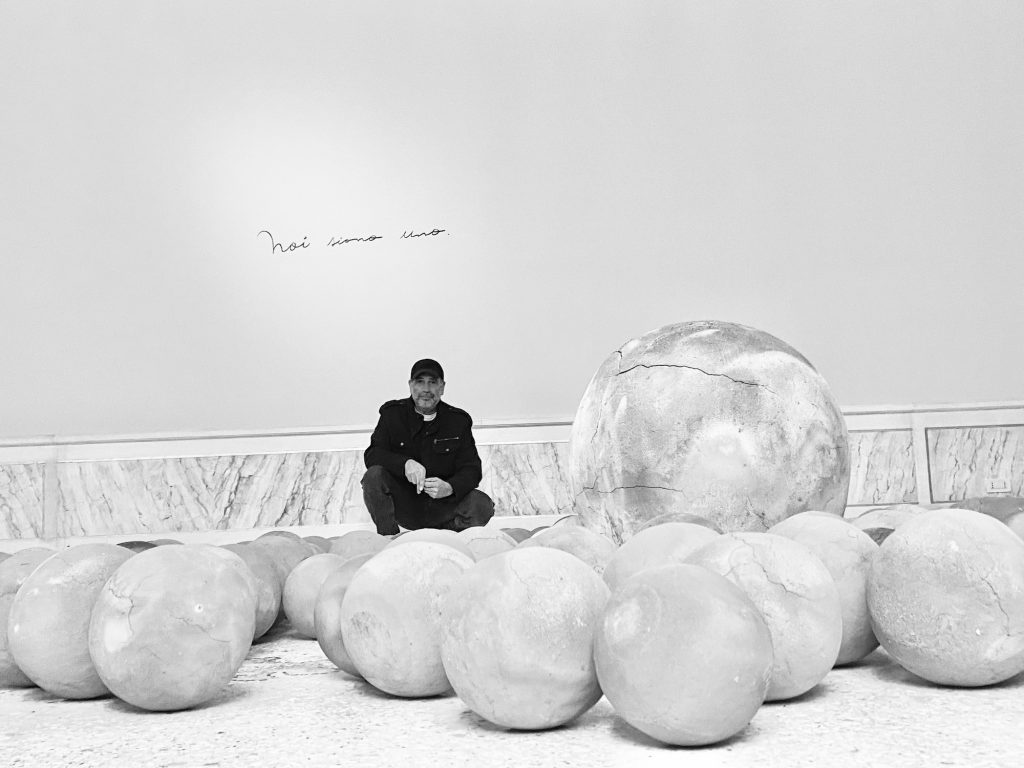 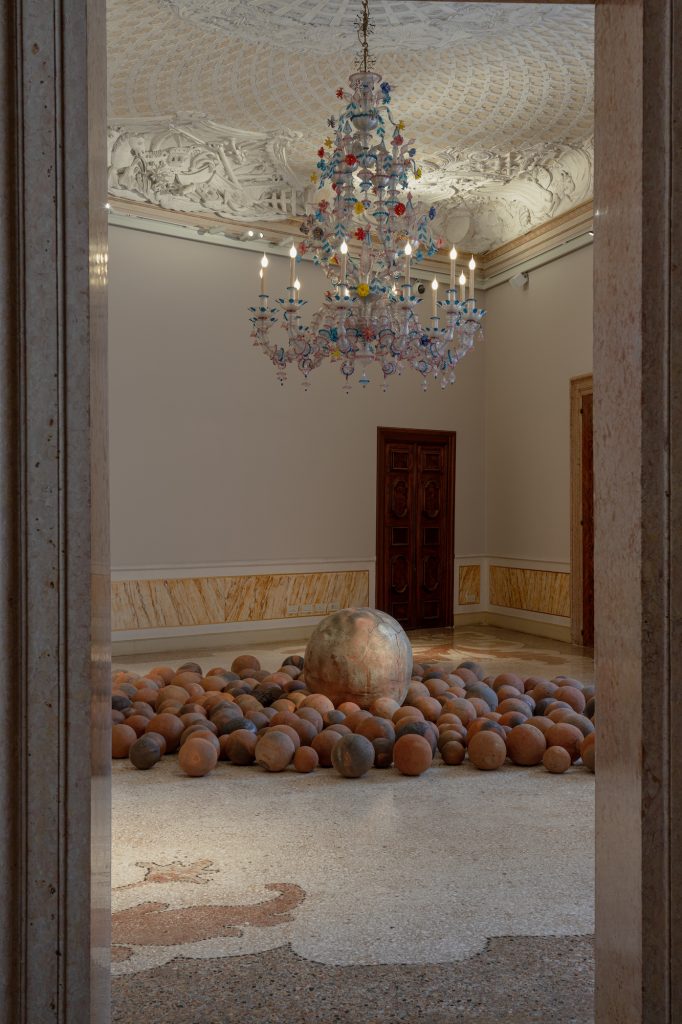 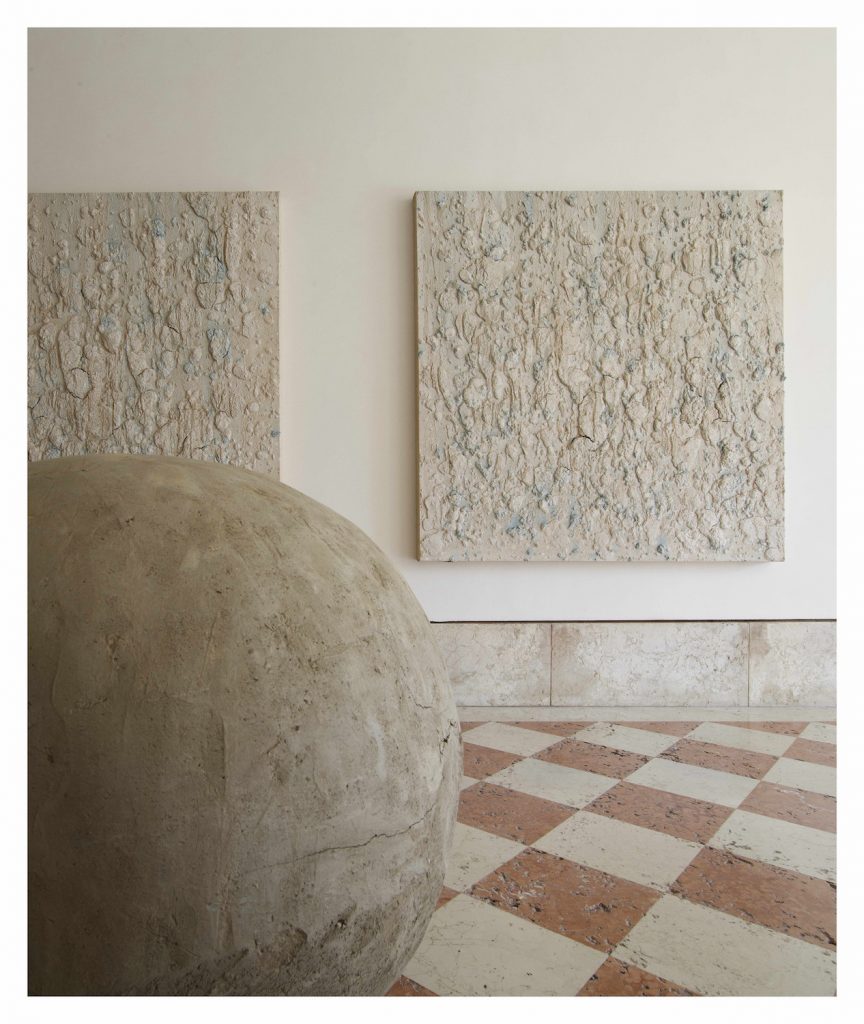 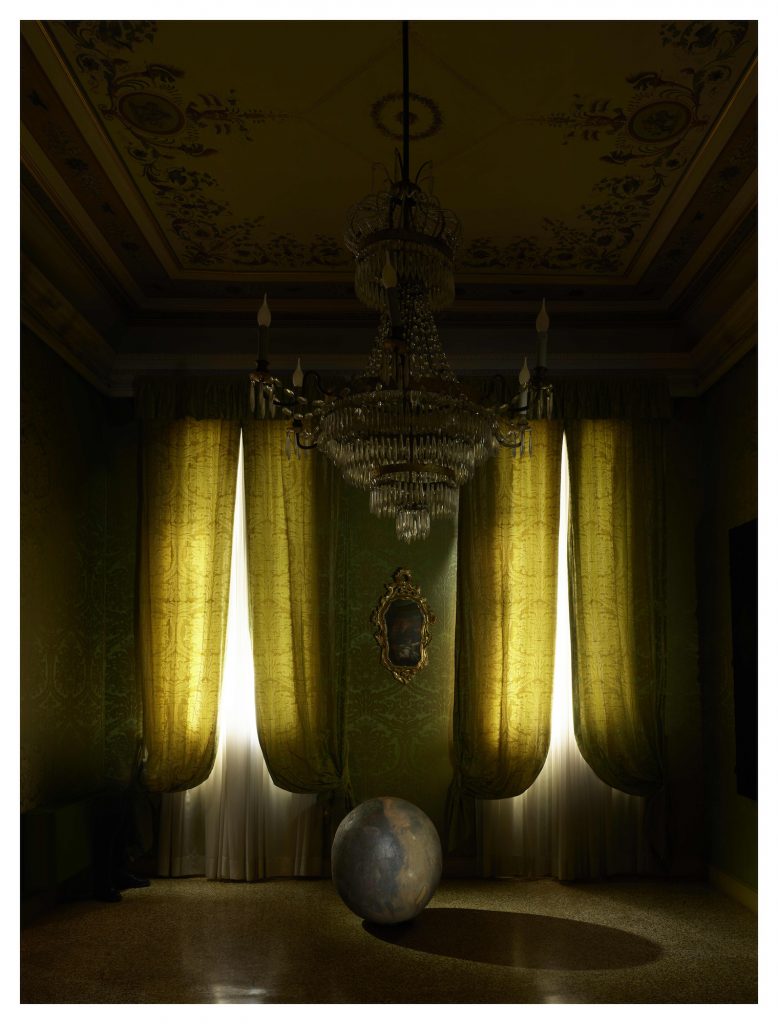 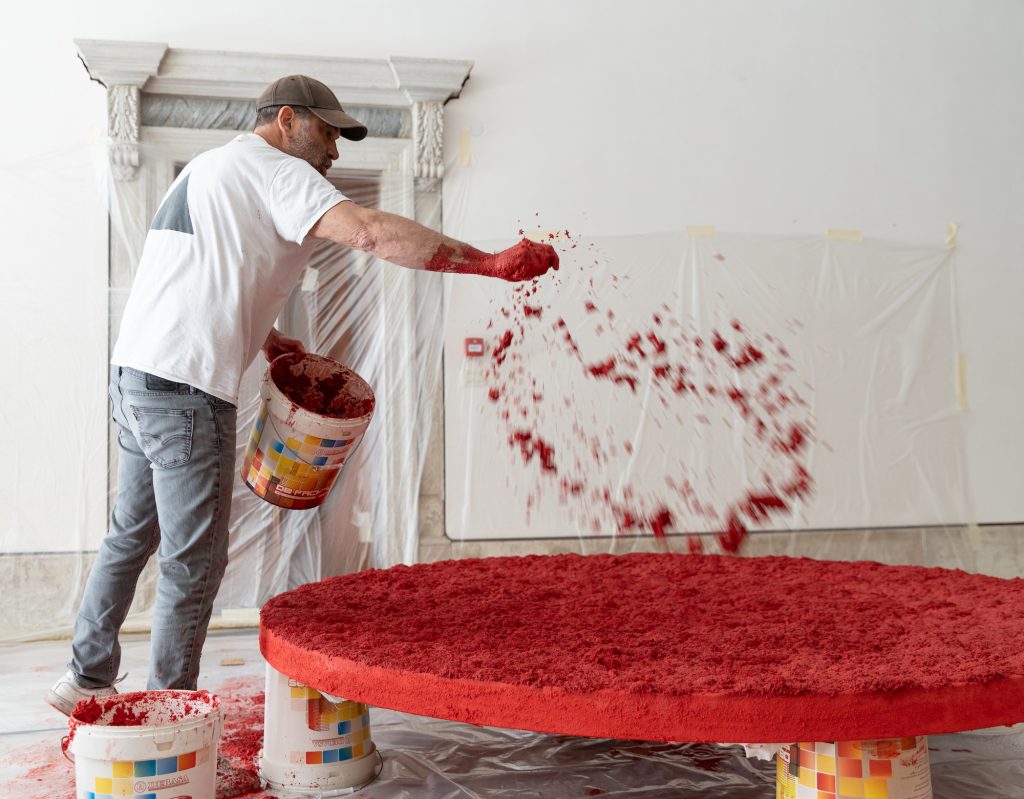 Bosco Sodi at work in his residence at Palazzo Vendremin Grimani, Venice. 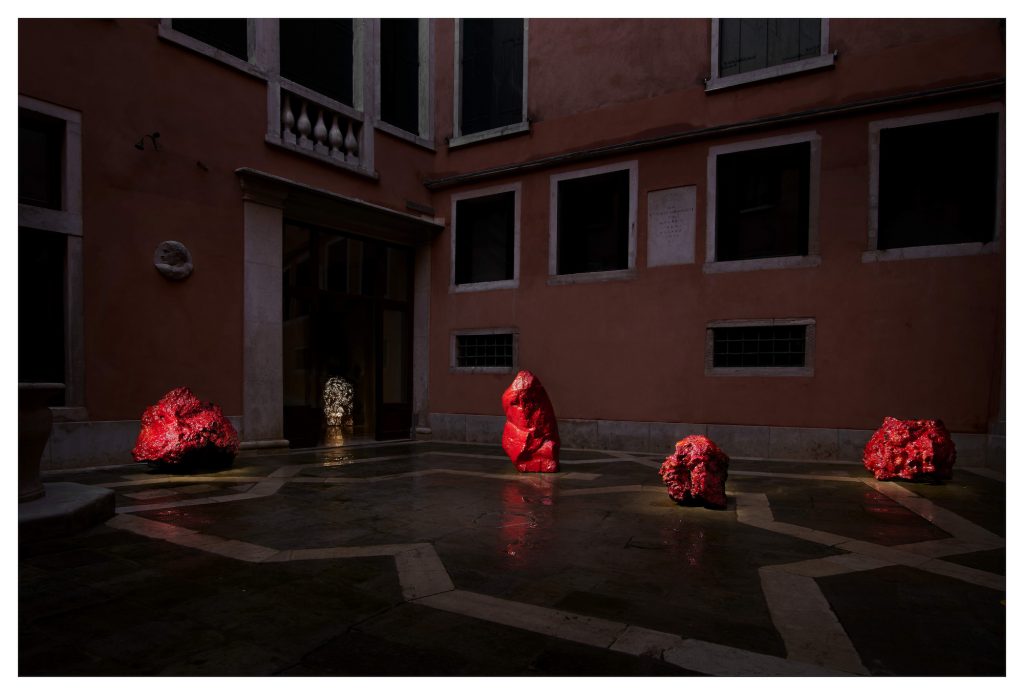 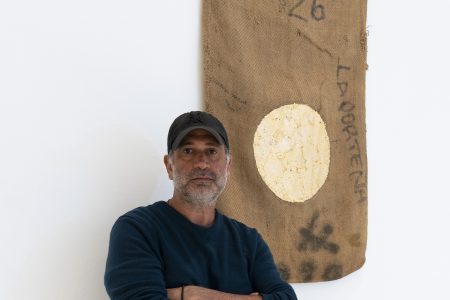 Galería Hilario Galguera presents Alabanzas, an exhibition of pictorial and sculptural pieces by Bosco Sodi that opens on Tuesday, February 7th and runs through April 7th, 2023. This is Sodi’s forth exhibition with the gallery. 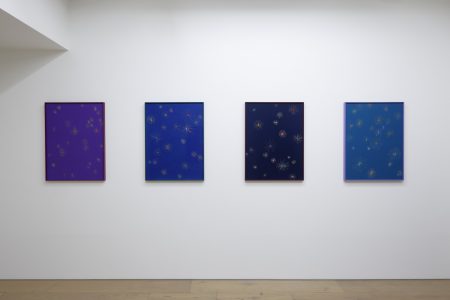 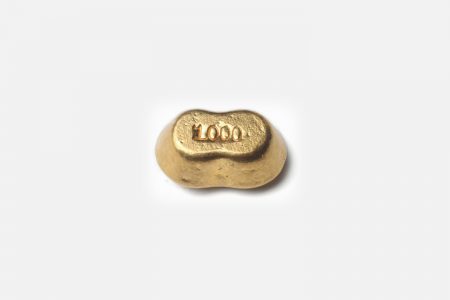