In 2016, the last of the Belgian enamelling companies was slated to shut down. That is, until Tanguy Van Quickenborne and Vincent Vanden Borre walked in and were amazed by what they saw.

If you’ve seen the enamel signage of the RATP network in Paris or a Hughes Renier fresco in Brussels’ Place Cardinal Mercier, you’ve seen the work of the Émaillerie Belge. Founded in 1923, the company excelled during the enamelled advertising craze that spread in the following decades. Once visual pollution laws came into action and road advertising was reduced in the early 60s, the sector saw a general decline —as a matter of fact, the Émaillerie Belge is the only enamelling company left in the Benelux region.

But it was bound to disappear as well, with an impending shutdown in 2016 and the sale of its Molenbeek venue. That is, until two visionary young entrepreneurs thought that design could save the company —and judging by duo Muller Van Severen’s early intervention, it might actually have. We spoke with Vincent Vanden Borre, Émaillerie Belge’s CEO, about the vision he and Tanguy Van Quickenborne share for the possibilities of enamel applications in the design market.

TLmag: How did you end up running this company?
Vincent Vanden Borre: What happened was that Muller Van Severen were in contact with the Émaillerie Belge three years ago, to explore the possibilities of working together and using enamel for their designs; they wanted to present a collaboration at the Salone del Mobile in Milan. To make a long story short, the previous owner answered that the company was shutting down within two years, so they weren’t interested. The designers were disappointed and they talked with Van Den Weghe [Ed’s note: Tanguy Van Quickenborne’s company], so they were the first who found out about the fact that Émaillerie Belge would stop its activities. Tanguy had a look at the possibilities, and in May of 2016 he contacted me and told me he was thinking of taking over the company. The buildings [in the original Molenbeek location] were already sold, so Émaillerie Belge would have to leave in one or two years’ time. I only had two weeks to decide, but I said: “Let’s do it.” I joined the daily operations in August of 2016.

TLmag: In its heyday, it had more than 130 employees, but today operations are reduced to 10 people. Why did it make sense to invest in the company now?
VVB: We came for the first visit and had a “Wow!” feeling. We were so stunned about what we saw, in terms of heritage and the artisanal production, that we fell in love with the company right away. The business wasn’t doing well at the time and the company was about to close, so we just believed in what we saw and in the product itself. Just looking at the potential of enamel, we came up with new possibilities, and that’s why we decided it was the right choice.

TLmag: Which new possibilities?
VVB: When we arrived we found they were serving the base market —that is, flat panels for advertising, signage for streets and metro systems, collection panels for comic books and a few art pieces. We thought that we could keep the base market but expand to art and design, to enamel pots, pans, trays, tables and chairs. We also saw interior architecture possibilities, from kitchens to ceilings; for exterior architecture, we saw a chance in façades. We saw these new markets and we started developing them.

TLmag: You’re not competing in terms of price, as it is such a labour-intensive product, but you do have an advantage in terms of eco-friendliness, as it is a very long-lasting product. Has that given you a competitive edge in today’s sustainability-minded market?
VVB: Yes. We do focus on the resistance of the product, gigantic in many ways, and on the high quality that we offer at the Émaillerie Belge, as we are one of the leading companies worldwide when it quality standards.

TLmag: And since you’re talking about exploring the possibilities with the design market, what happened to the original Muller Van Severen project?
VVB: This year they presented several different designs, that they did with us, at the Salone del Mobile, and we’re now in contact for a new project. We are also working with designers like Maarten De Ceulaer and Damien O’Sullivan in other projects. These requests are challenging: we have a large range of colour possibilities, compared to other enamel companies —around 800— and this gives us the change to find new colours, new materials to enamel, new finishings. The shapes are also a challenge: if you work with steel, at 800 degrees it can get deformed, so we have to work on new structures to support the materials. Every design is challenging in a certain way.

But as part of the previously existing deal, you’re now moving from Molenbeek to another location inside Brussels in 2018.
VVB: Many people ask us: “Why do you stay in Brussels?”. Abroad, many people link the company with the city —they even call it Émaillerie Bruxelles. It’s also a French name, so it would be quite strange to put it in the middle of Flanders. And also, a crucial part is the team that works here: we want to keep everyone in the company. Moving 50 kilometres away means that they wouldn’t be able to come anymore, so that’s a bit part of why we decided to stay here. That’s why the new location will still be in central Brussels.

Going back to your account of the “Wow!” feeling, do you think that reaction had anything to do with the fact that you’re a Millennial and had that nostalgic attachment to craftsmanship?
VVB: A lot. I’ve always been fascinated with artisanal production; I’m very into high-quality niche markets. People like digital things, but in a certain way the want to go back to their roots, so they appreciate both new things and the back-to-the-past products. In terms of market, we’re seeing that balance.

Among the nostalgic, in a more commercial way, are the enamel art collectors. Have you seen a positive response from that niche since you took over?
VVB: A lot, a lot! We were surprised with the amount of visitors we had at events like the Open Bedrijvendag. We didn’t know that the collector market was so big and wide, spread all over the world. To be honest, we thought it was a very small group of people, but it’s everywhere. Enamel is something we’re in contact with on a daily basis, from Le Creuset to street signs. People don’t realise how often they’re in contact with it, because they don’t know the product.

You’re a design collector yourself. Have you thought about what is so attractive, from an investment point of view, about enamel art?
VVB: It’s a couple of things. There’s the historical factor, as enamel has existed since the Persians’ time, so it’s a very old product that still lives on nowadays. Then there’s the possibilities with colour: when you look at an enamel panel it gives you a warm feeling. Steel is cold, but an enamel steel panel is totally different: it’s a warm work with a lot of depth in it —you get the feeling that you can push into it with your finger.

And then there’s the resistance of the product itself: it’s UV resistant, it’s scratch resistant, impact resistant, chemical resistant, high-temperature resistant. A collector’s panel produced today is not like a car, that loses its value at first and then goes back up once it’s a vintage item: once you buy enamel, it goes up in value every day. That’s something very strange and special about it. If you want, you could call it the new gold! (Laughs) 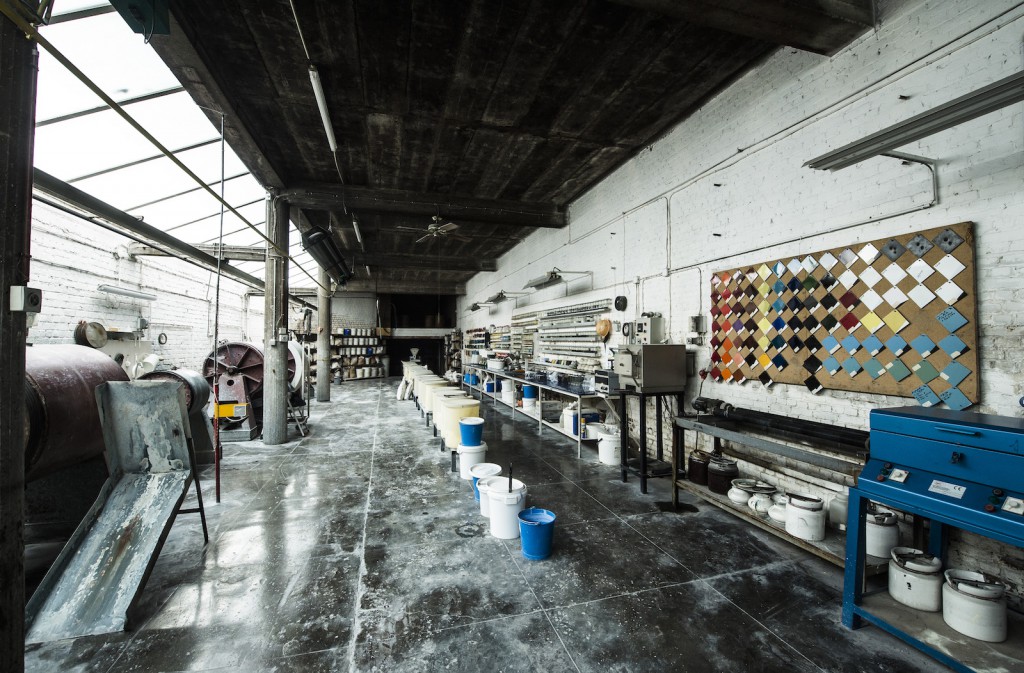 The station where the different enamel colours are made, using proprietary formulas 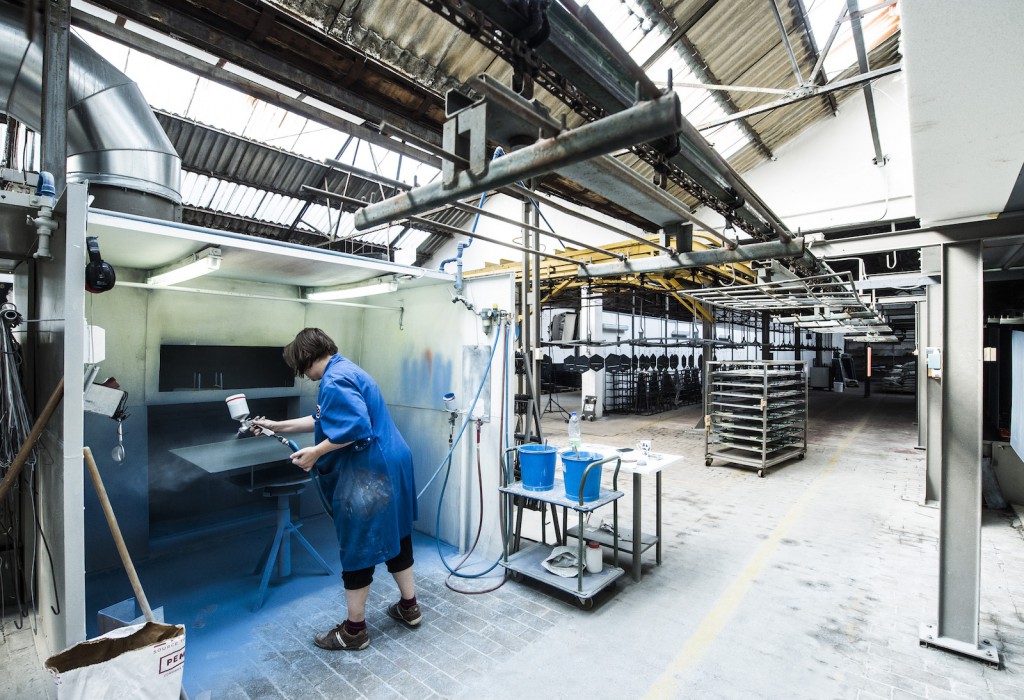 Enamel application with a spray pistol 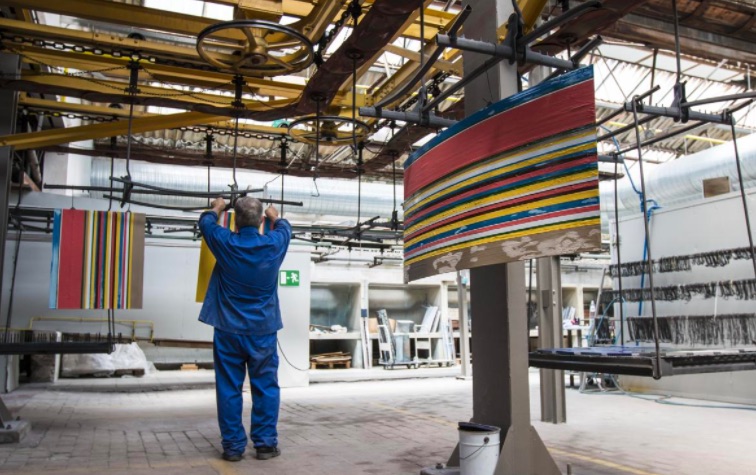 Colour tests on a panel 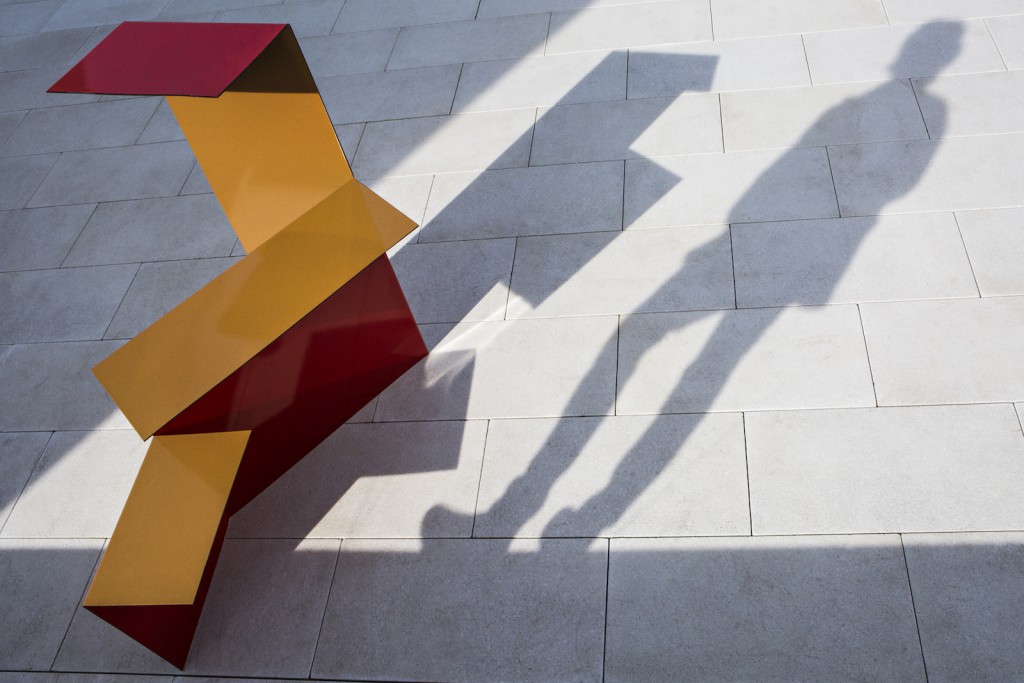 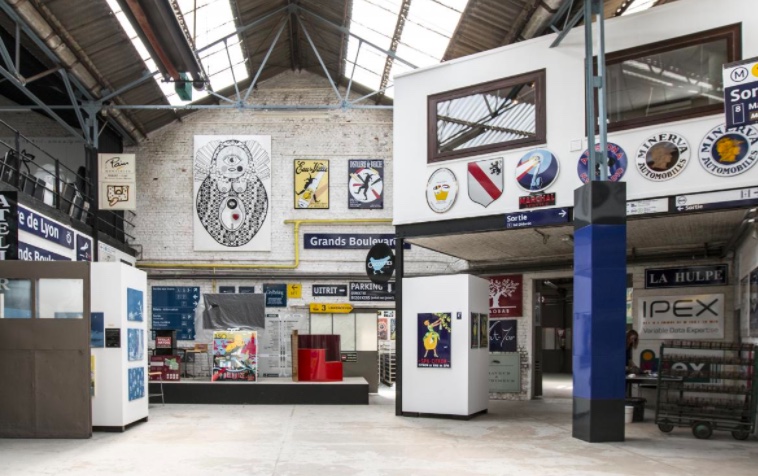 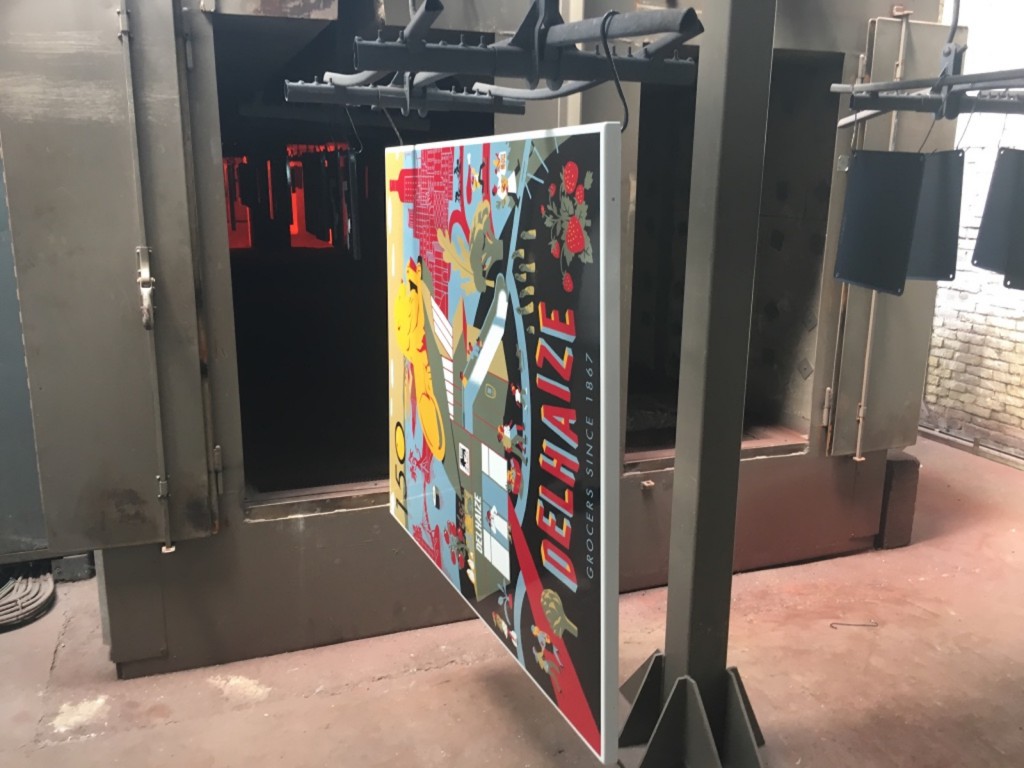 Making a screenprint panel for Belgian supermarket chain Delhaize
‹ Back