Colour us impressed: Sèvres turned its Place de la Manufacture headquarters —room upon room, throughout three floors— into a sprawling tribute to the power of colour to amaze, seduce and stand on its own as a communicative factor.

And this goes beyond the likes of Sèvres blue and the hundreds of colours the in-house laboratory has created since 1740. The exhibition, appropriately called L’Expérience de la couleur, is the result of a collaboration between the legendary ceramics house and institutions like the Centre Pompidou, which celebrates its fortieth anniversary this year —and contributed 50 pieces to the banquet. Panting, photography, glass, textiles, architecture, design and even gastronomy and the cosmetics industry are represented via works from a list that includes Yves Klein, Josef Albers, Sonia Delaunay, Erwin Blumenfeld, Georgia O’Keefe, Philippe Starck and Nicolas Darnauguilhem. These pieces are placed in direct contrast to ceramics creation by the likes of Ernest Chaplet, Andrea Branzi, Atelier Polyhedre, Ettore Sottsass, Pierre Charpin and Jean Girel.

It’s an ambitious project, made up of 400 items. For this, general curator Christine Germain-Donnat and scientific curators Frédéric Bodet and Olivier Dargaud examined national collections from Limoges, Les Arts Décoratifs, the Centre national des Arts Plastiques, the Mobilier National, the CIRVA and the Pompidou, as well as their own archives at Cité de la Céramique-Sèvres.

We spoke with Bodet about their process and the link between textiles and ceramics in France —and also, his favourite sections inside the enormous display.

TLmag: How did the concept for this exhibition come about?
Frédéric Bodet: We wanted to open the subject of the exhibition and put ceramics inside the contemporary art concept. We wanted to focus on the colours in ceramic, of course —it’s the crux of the exhibition—, but I wanted to speak about ceramic perfection confronted with another type of perfection, outside of the ceramic realm. And there’s a parallel in contemporary art and design: they also want to seduce and convince via colour, on a creative level. Colour here is not a finishing object, but a subject.

I also wanted to exhibit ceramic with textiles, because of their historical connection —for example, the first chemists who worked in the colour laboratories in Sèvres were coming from the Manufacture des Gobelins. At the beginning of the nineteenth century, they were pioneers in colour in both textiles and ceramics. Olivier Dargaud, our head of scientific research, is my co-curator of the exhibition.

TLmag: So you have scientific research going after emotional results.
FB: Our biggest challenge is making the color chart a perennial thing —the difficulty of finding the same colour after each kiln. With textiles, there’s the same difficulty with continuity and homogeneity. I wanted to show the colour evolution in ceramics at the same level of the cahier de tendances in design and fashion. Now, people want things that are very different to what the history of ceramics can propose. And now in industrial ceramics everything is possible, exactly like the automobile industry. In Sèvres it’s different, because we’re very artisanal. It’s not an industry. Everything is made by hand in a very slow process. We don’t have the same possibilities as the big industry. But since the nineteenth century we’ve had the biggest colour chart we can possibly think of —750 colours inventoried. It’s enormous.

TLmag: For this exhibition you worked with Dutch duo Scholten & Baijings as designers in residence. How did that work?
FB: Scholten & Baijings were free to do what they wanted. Maybe too free! (Laughs) We worked with low temperatures in their experiments, because they usually work with very sweet, soft colours, and we achieved that in Sèvres by using long temperatures. They made circles for mural hangings and some new vase forms, with some colour combinations. They are very well made.

TLmag: And how did you choose the pieces from the Pompidou to present along the ceramics?
FB: I looked for pioneers, aventuriers de la couleur, people who worked with freedom in terms of colour. I defined themes for the exhibition to build the circuit around the universal culture of colour. In the twentieth century you have people like Sonia and Robert Delaunay, who mixed colours in an abstract way, to applications in design, textiles and fashion. At the Pompidou they had large donations of some pioneers of colour consulting, like Jean-Philippe Lenclos and André Lemonnier. I wanted to have them here, to signify the evolution of the visual landscape.

TLmag: What are some of your favourite results, after this particular search?
FB: Ceramics is a component of the idea of the Mediterranean landscape. In the 70s, Jean-Philippe Lenclos took photos of landscapes all over the world to observe the patrimony of colour and build tendencies for designers. This is like an image bank. This idea of the Mediterranean colour as a patrimonial aspect is very important, and ceramic is an important part of it —the yellows, the greens, the blue, the terracotta.

But I’m not showing the terracotta, for example, as a flower pot: I’m presenting mural work from two French designers, who made a structure with small architecture made from terracotta, as a landscape. We see the terracotta pot or the brick, but reinterpreted. I like this section of the exhibition. 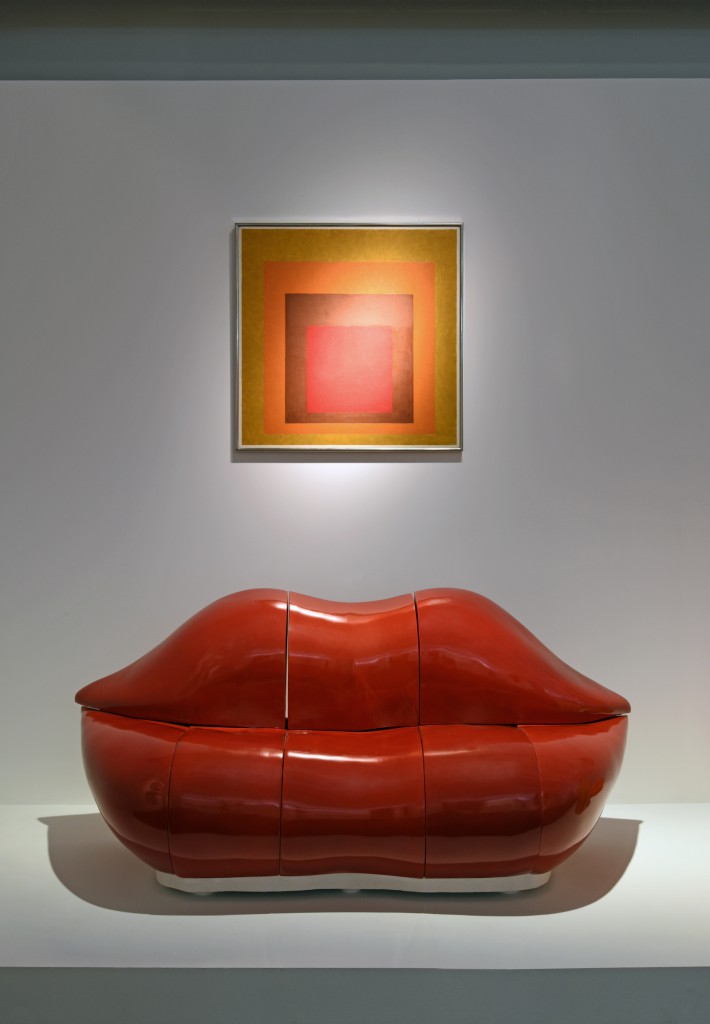 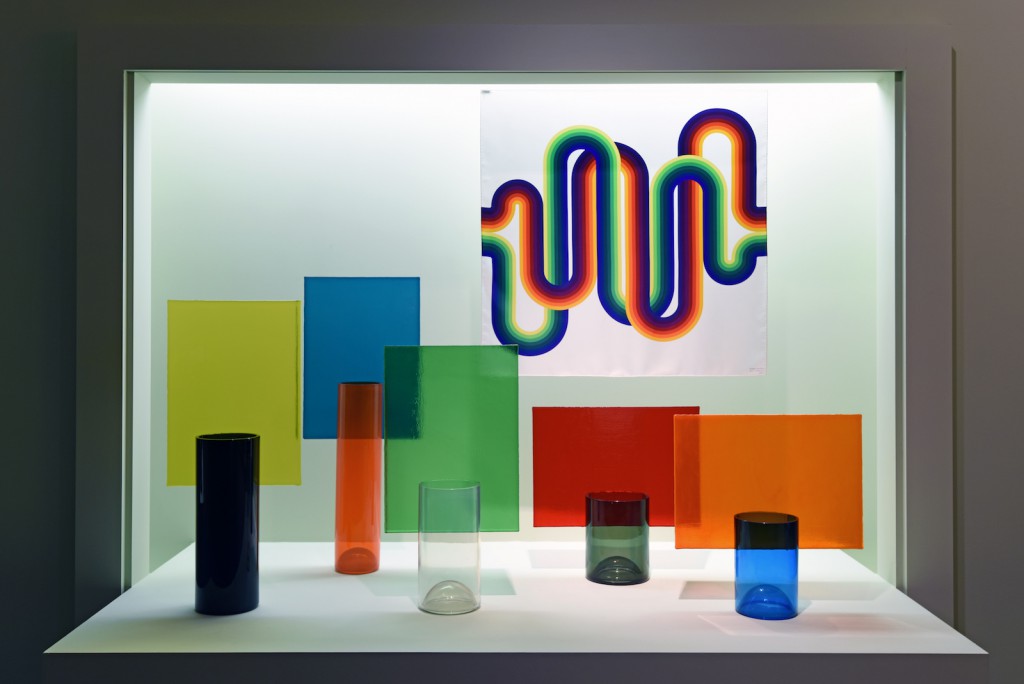 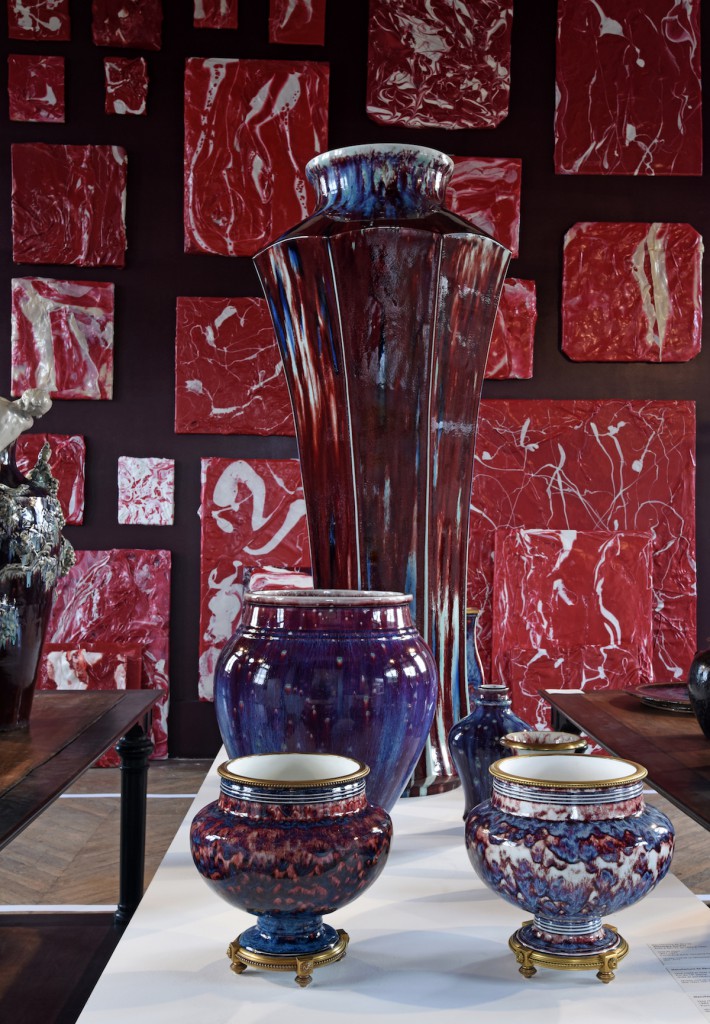 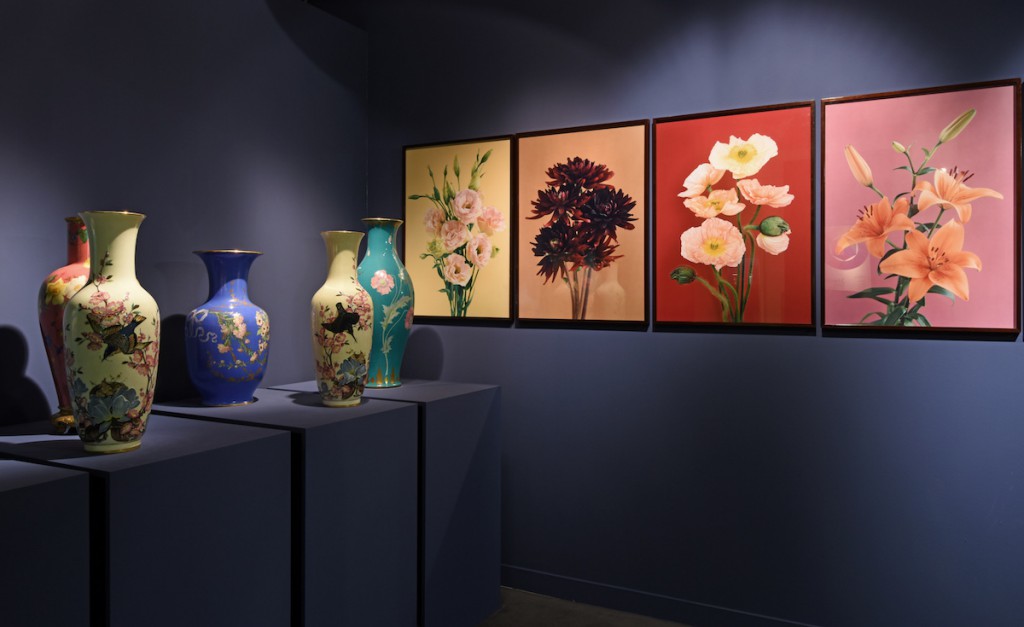 One of the contrasting selections in L'Experiénce de la couleur
‹ Back