Since first gaining attention for his sulphur sculptures at Documenta 9 in 1992, Jean Michel Othoniel has continued to experiment within his practice and seduce us with the beautyof his works. Never limiting himself to just one medium, Othoniel has worked with everything from drawing to sculpture, installation, photography, writing and performance.Over the last few years, he has turned his focus towards architecture as he travels and creates installations in gardens and historical sites around the world. For his latest site-specific installation, ‘Îles Singulières’, Othoniel switched out his studio in Paris for Château La Coste, a 180-hectare art sanctuary deep in the French countryside. TLmag spoke with Othoniel on his latest work, providing shelter and the importance of listening.

TLmag: Your multifaceted practice now spans almost three decades. What led you to start focusing your efforts on architecture?

Jean Michel Othoniel (JMO): I’ve always loved working with architects, but at one point I felt like it was time that I start realising my own architectural ideas. It’s also a way to continue pushing my boundaries and move forward. I don’t simply want to create a sculpture that you can look at, but one that you walk through and live in.

There are two sides to architecture that I love, and I like playing with them both. There’s the idea of “the outside” — like monuments — and “the inside” — a protected, safe environment. The purpose of the inside is also the idea to extract yourself from the situation of everyday life (the outside world). For me, the thought of creating something that can be publicly viewed from the outside and privately experienced on the inside is an inspiring one.

TLmag: “A sculpture you can live in” – that’s an exciting thought! Why do you the necessity to create the spaces themselves has developed?

JMO: It’s interesting to think of being surrounded by a sculpture. Like a cave, the only way to truly experience a sculpture is from being in it. Another reason why I think I decided to move on to creating this “extra step” in my work is that creating a sculpture now is very different to let’s say ten or twenty years ago. The world has changed, in quite disturbing ways — and I think that by creating this architectural work I can create a place where the viewer can be protected, and be free from the pressures of the outside world.

TLmag: How do you think the world has changed over the last twenty years? Do you mean politically, geographically, technologically, environmentally or something entirely different?

JMO: It’s a bit of everything. Of course, climate change is a huge issue, but in terms of politics, I’m specifically referring to the matters of privacy — and the fact that it barely even exists anymore. It’s quite unnerving. I believe that an artwork should be a site where you can be disconnected from the environment — in ways that we can’t be anymore.

TLmag: Does creating these works also provide a shelter for you?

JMO: Actually, it’s quite the opposite. When I’m creating new work, I’m completely aware of not only my environment but what’s happening in the rest of the world. I feel a duty to create these conceptual spaces to protect the viewer and myself. That’s one of the unique opportunities that artists have nowadays. We create the rules and rituals that go on around our spaces. We’re probably the only ones that have this power, this freedom to decide how spaces are used — whether it’s free from an internet connection or free from other aggressions of everyday life. This is why we, as artists, have to be so aware of the time and place that we situate ourselves in. We can’t afford to be disconnected from the world; that’s a privilege we leave to those experiencing our work. We have to be right in the centre of it all.

TLmag: In 2007 you were invited to create work by for Château La Coste for the first time, and you created the work “La Grande Croix Rouge”. Now, about twelve years later — you were re-invited to create a new site-specific installation in the Chateau’s new Renzo Piano Pavilion. What’s it like to return there after so long?

JMO: Back in 2007, the Château was truly an avant-garde idea, and it still proves to be a visionary space — created by visionary people. The purpose of creating a destination, a sanctuary for artworks was truly a new concept in France. Being asked to return after all these years and to work with them again is a dream. This time around, it’s especially interesting because it’s going to be a temporary installation — as ‘La Grande Croix Rouge’ is a permanent piece. It’s fascinating to enter into a dialogue with the architecture of the Renzo Piano Pavilion and use the space — not only as a space in which work will be shown but as an element that is an essential part of it. I feel like I’m playing more with the idea of land art, art that exists together with its environment, rather than a “normal” exhibition.

TLmag: Could you tell us a bit more about this site-specific installation?

JMO: There are many challenges in terms of realising this project because it’s a piece I’ve never created before, so everything was specifically designed for this space, and this space only. I also feel like it challenges the rest of my work too, testing my boundaries and what I can do.

An amazing architectural feature of the Renzo Piano pavilion is that it’s almost completely underground. There is a massive wall of about 100 metres, all in concrete, running through it. My piece, The Infinite Wall, will feature a reflective twin of this wall, formed by a long chain of mirrored bricks. Inside the wall, I’ve placed blue mirrored bricks that give the viewer the impression of water trickling down the middle. Ultimately, the two walls will lead the viewer to an open space, where they’ll see what seems like a stone, an island, the Ile Singulière floating in the middle of the space.

It’s a very minimal installation, but quite spectacular as it is connected to the landscape, architecture and quality of the light at the Château La Coste. Especially that last part, the sun, is an important facet to dwell upon, as the light of Provence surrounds you wherever you are in the property. Another element I play with is the sound of the fountain outside of the pavilion — this accentuates the playful idea of water flowing down when you enter the space.

RM: How is working in this site-specific way different from working in your studio in Paris, for instance?

JM: When I’m back in Paris, it’s a more organic, mundane way of working. I create drawings, work on new projects and have shows. Some of these sculptures I create stay in my collection, and others will be sold. Working on-site is more of a challenge because I’m so aware of the dialogue between myself, the object and the space around it. Time, and often the lack of it, is also a fundamental factor when creating these kinds of works. As a sculptor, I also see it as something that’s very different from the classical way of creating work. Usually, you can keep your pieces around until you’re ready to reveal them, or choose to never even reveal them at all. In these spaces, however, the thought of exhibiting and having the installation on view is ever-present.

TLmag: Over the years you’ve created works in public squares, museum spaces and now, you’re even creating your very own architectural pieces. How do you approach creating work for such different environments and audiences?

JM: There are so many factors that you need to consider when creating a new piece for a public space. It depends where you are, in which country, if it’s commissioned work and if you can link it to a cause or an idea that you want people to focus on. I’ve created works for spaces around the world, and each space has it’s own life and story. Every time I create a piece that’s in the public eye, and thus in the public space, I try and understand not only the basic surroundings of it but the desires of the people I’ll be working with and the culture that the work is created in. I always say that the most important thing you need to master as a visual artist is listening. You need to hear and listen to the stories of the people. This exchange is the most crucial part of my preparations — and from there the form and function of the work are developed.

TLmag: So when you leave home, you’re not recusing yourself but completely immersing yourself within your new environment…

JM: Exactly. It’s a very intuitive approach, but I feel like it’s also the most honest way of receiving information and genuinely getting to know a place. Sometimes, I feel like my work is an oracle: it says things about the world’s current state of being — even though, most of the time, I don’t have a clear idea of what it’ll be when it’s done. I believe that the artwork will show me — when it’s hanging on a wall or finds itself in the space — what it stands for. It gives me feedback on the reality that it exists in. In a way, I guess that makes me an oracle too.

Île Singulière will be on view at Chateau La Coste until November 20th, 2019. 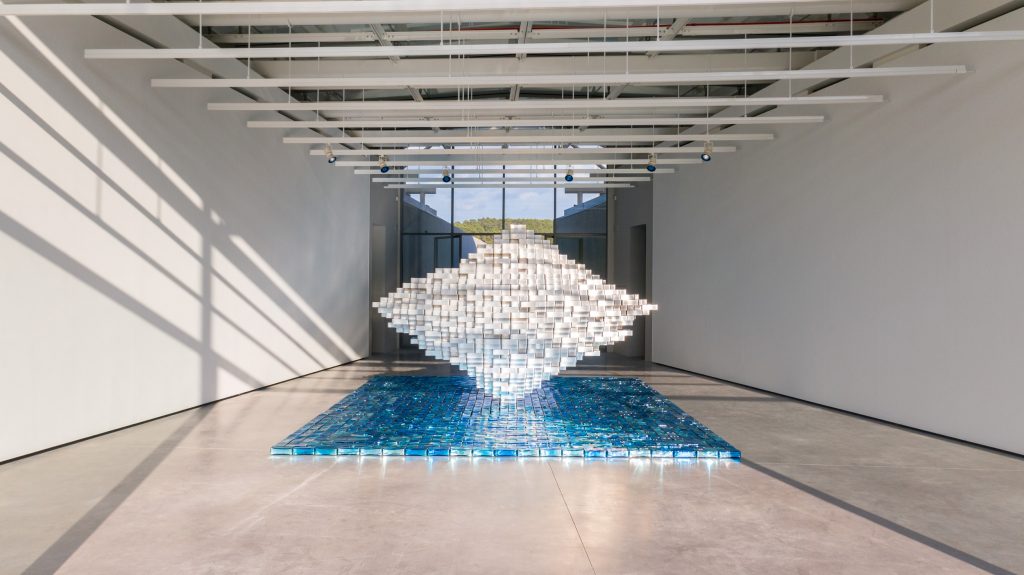 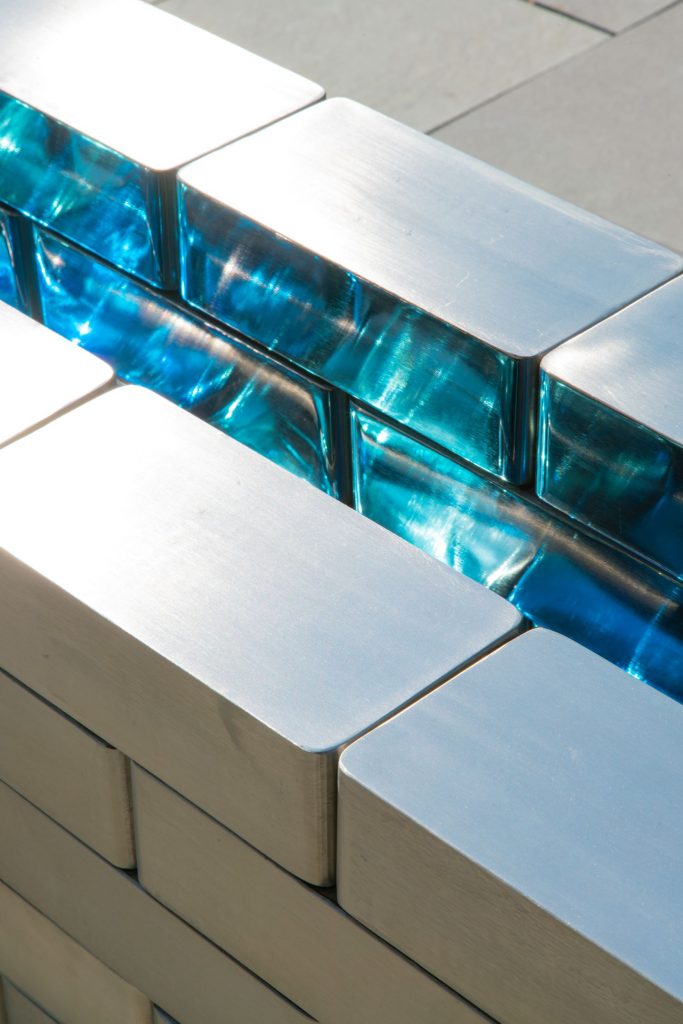