We are currently in the middle of a pandemic that, at the time this article is being written, has no end in sight. As we slowly emerge from these times, there are undeniable major challenges that remain clear when it concerns our planet’s wellbeing (economically, but especially environmentally). One of the biggest challenges that we are faced with when it comes to the climate crisis is how to unlearn our dependence on plastic.  Since its first production in 1907 (a synthetic plastic called Bakelite), the annual production of plastics has increased nearly 200-fold to over 381 million tonnes per year. For context: this is roughly equivalent to the mass of two-thirds of the world population. The slogan “Reduce, Reuse, Recycle” sounds easy enough, but there are little to no coherent or systematic assessments of how, and in what direction, the plastics system should change to become more sustainable. Earlier this year, STEPS (Sustainable Plastics and Transition Pathways) selected Swedish designer Kajsa Willner to make their academic research more accessible to a broader audience. Their focus? On how to face society’s major sustainability challenges related to plastics.

This isn’t the first time that this Swedish designer collaborates with researchers, or works with plastic. During Dutch Design Week 2018, Form Design / Center’s exhibition “What Matter_s” paired ten artists and designers up with their own researcher, with Willner ultimately creating her series “Polarized Portraits”: a series of mesmerising collectable objects made out of disposable plastic through which the designer sends polarized light. The pieces, whilst still environmentally harmful plastic waste, manage to show us that plastics are not always what they seem as they create everlasting “aesthetic portraits of our world”. Now, two years later, she says her works and research “feel more solid”. Willner elaborates: “This research feels like more embodied than ever before. Here, design is research and research is design. It’s connected to the bigger picture. I think it’s because I know the faces behind the research that is trying to figure it out — rather than them just being names on top of a page.”

The title of the resulting exhibition, ‘Materiality & Aggregation’, refers to the multidisciplinary collaboration between design and academic research. Created and curated by Willner herself, the exhibition highlights the five potential pathways that people can use to transition towards a more sustainable future: Bio-based, Biodegradable, Recycle, Fewer types and Reduced use. Each pathway is assessed in terms of the promise it makes, what it entails and how it has been criticized. “The aim for me as a designer and for this exhibition is to use design as a tool to communicate, to convey academic research in a way that can reach out to a wider audience. In this case; it’s about nuancing the public debate around plastic and advocating a more holistic view to how we approach the material” says Willner.

Each of the works focuses on a singular pathway and has its own point of departure.  For one of the pathways, ‘Reduce use’, Willner made an installation of 28 transparent cast blocks with different one-use plastic articles in order to highlight unnecessary consumption patterns. In this piece and in the ‘Fewer Types’ pathway piece, Willner utilises design as a way to illustrate the issue at hand. In the latter, she responds to the problem of how to combat the magnitude of slightly different plastrics that are now in circulation by visualising them within a patchwork blanket that encapsulates 117 airtight pockets filled with different plastic granulates. This pathway promises to decrease the complexity of the plastic system by phasing out additives, which are difficult to recycle, and promote the use of “mono-materials” [a product that is composed of a single type of material, rather than composed out of many].

For the ‘Recycle’ pathway, Willner takes it a step further. Here, the produced object is an eye-catching acrylic circle that produces an optical illusion named “The Troxler Effect”. It hints at the experience that many of us have had when going down the rabbit hole of what to recycle, and how – or looking for the answer if there’s a point to recycling at all. “When we focus too much on the details, we lose sight of the holistic view that is required in a transition towards a more circular plastic system. As I started reading through this research, it was almost as though I subconsciously already knew the points that they were making – but never wanted to admit it to myself. So the piece in the ‘Recycle’ pathway really recreates that, and focuses on playing into those subconscious thoughts”.

One of the bigger challenges for the designer was how to go about communicating this vast field of research towards a broader public. “First I thought I had to include all these diagrams and a vast amount of text in order to make people aware of it all – but that actually scares people off. Eventually, I decided to work with different layers, that really lets the viewer chose how ‘deep’ they want to go into the research. They can choose to remain at the visual aspect of things, that is, looking at the works and letting them sink in. If they want to know more they can look at the project statements, and if they want to know even more there’s even a QR code that will lead them to the immense research done by STEPS. It’s all possible.”

As the curator of the show, Willner’s exhibition structure was made with the aim to produce as little CO2 emissions as possible. She tried several methods in order to achieve this, from using sustainable materials from local firms to using a bio-based carpet that is collected and recycled at the end of its life to using bio-based resin to create her cast blocks. “I wanted to show that with a bit of stubbornness and a lot of research it’s possible to make better choices. I believe it’s really important that we as designers and architects start to push for a change using more sustainable materials but also demanding from companies and producers that we collaborate with to take responsibility over what happens to used materials after product we finish using them”.

A 2018 analysis on recycled plastic states that only 9% of all plastic ever made has likely been recycled, and a new investigation by National Public Radio (NPR) and the Public Broadcasting Service (PBS) reports that the large oil and gas companies that manufacture plastics have known for decades that recycling plastic was unlikely to ever happen on a broad scale because of the high costs involved. There is still something we can do though – as individuals that is – Willner says; “In all these interwoven pathways, there’s a lot of political and government action and guidelines that needs to be put in place. But one thing that we as individual consumers can do is look at our own consumption patterns, and rethink them.”

“Materiality and Aggregation” can be found at Hedmanska gården (Malmö, Sweden) in front of Form Design / Center‘s main entrance, and is on view until September 27th, 2020. After its outdoor installation at Form Design / Center, the exhibition will travel to another part of Malmö city, Lokstallarna, to be exhibited at the main location during Southern Sweden Design Days in May 2021. 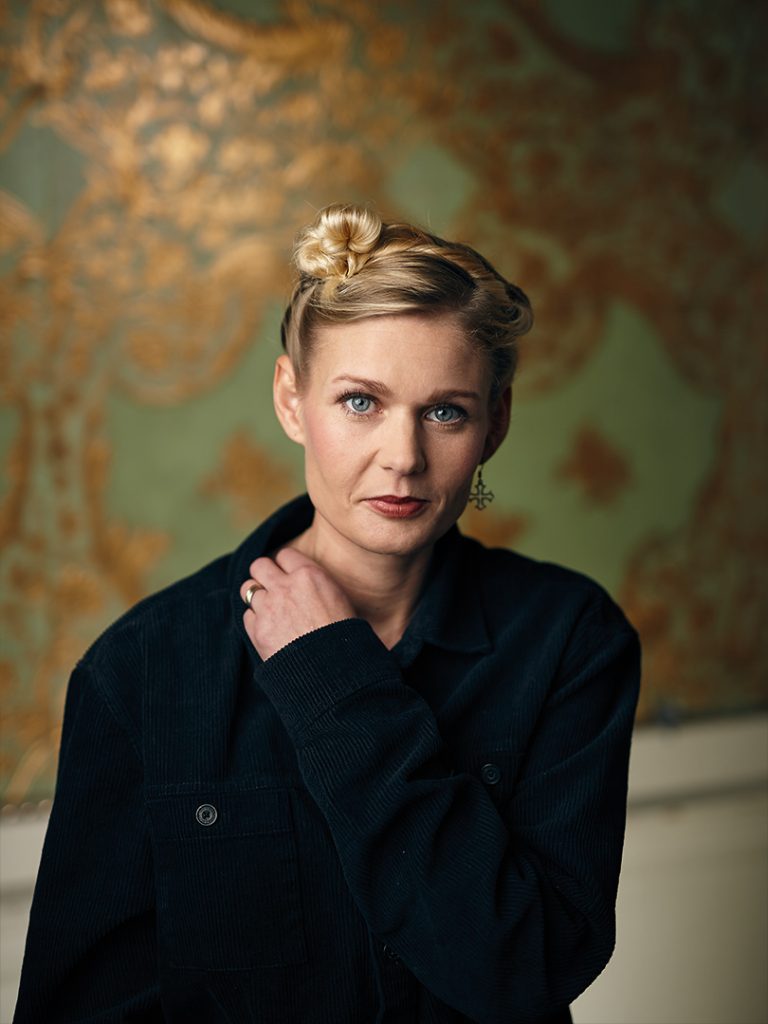 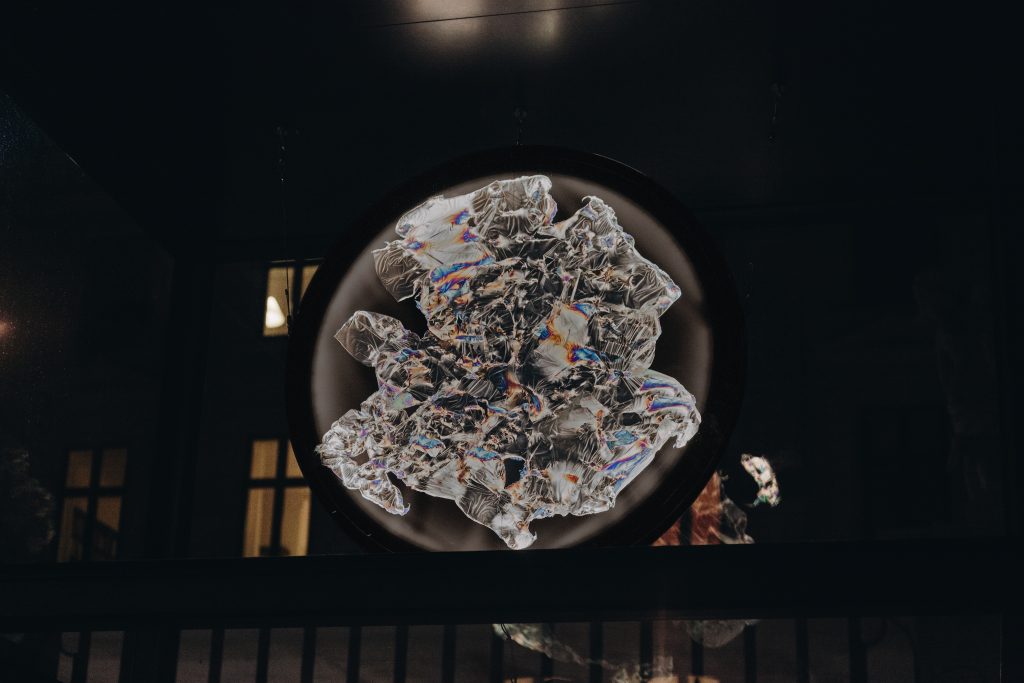 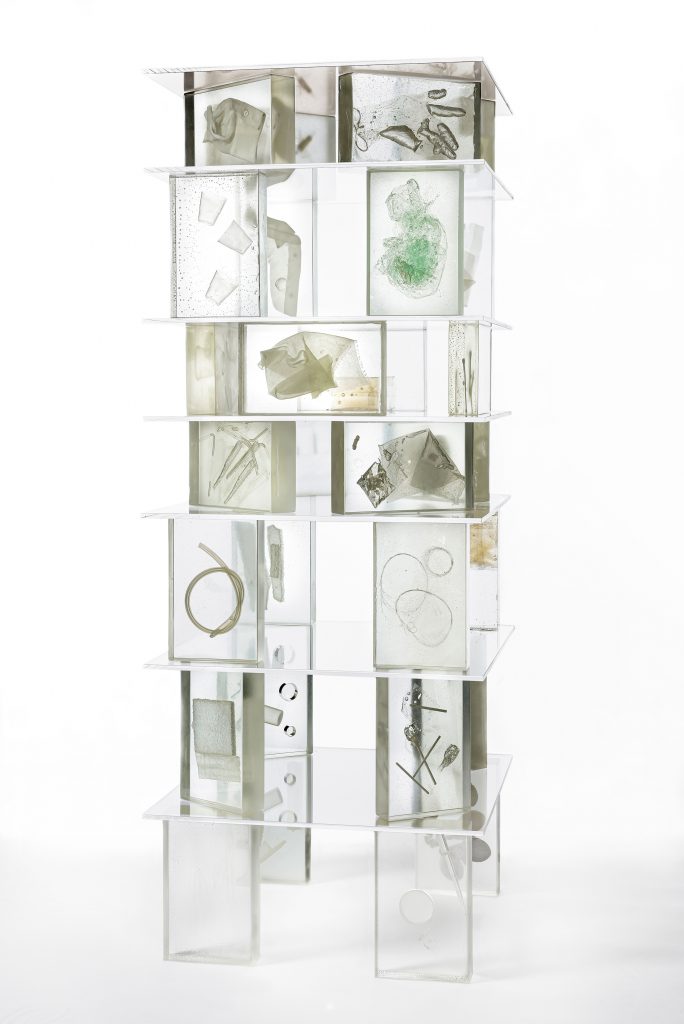 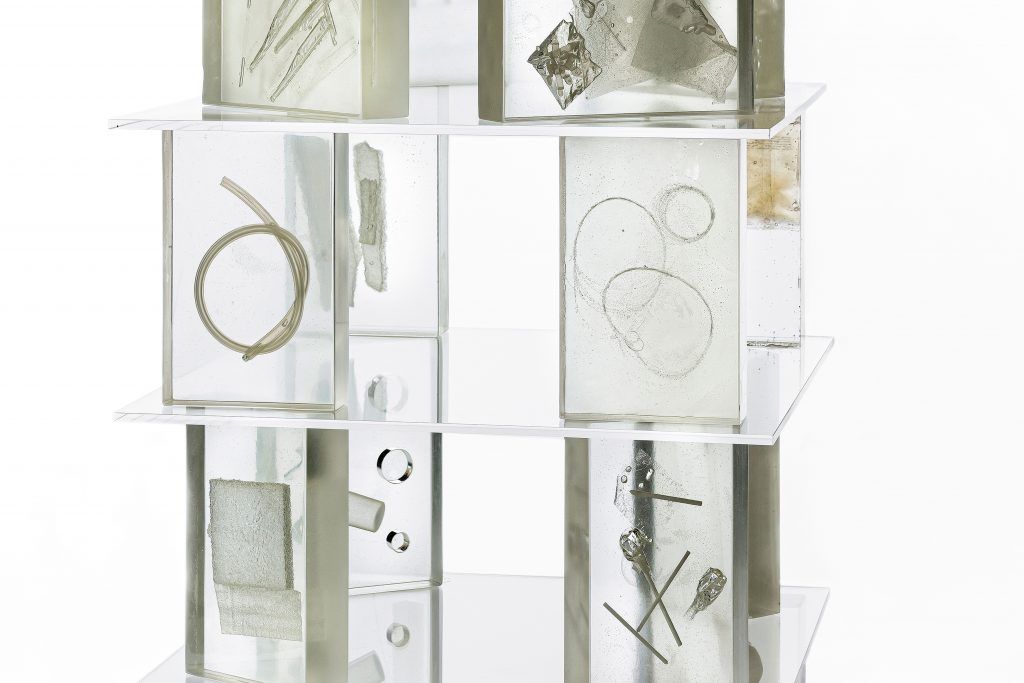 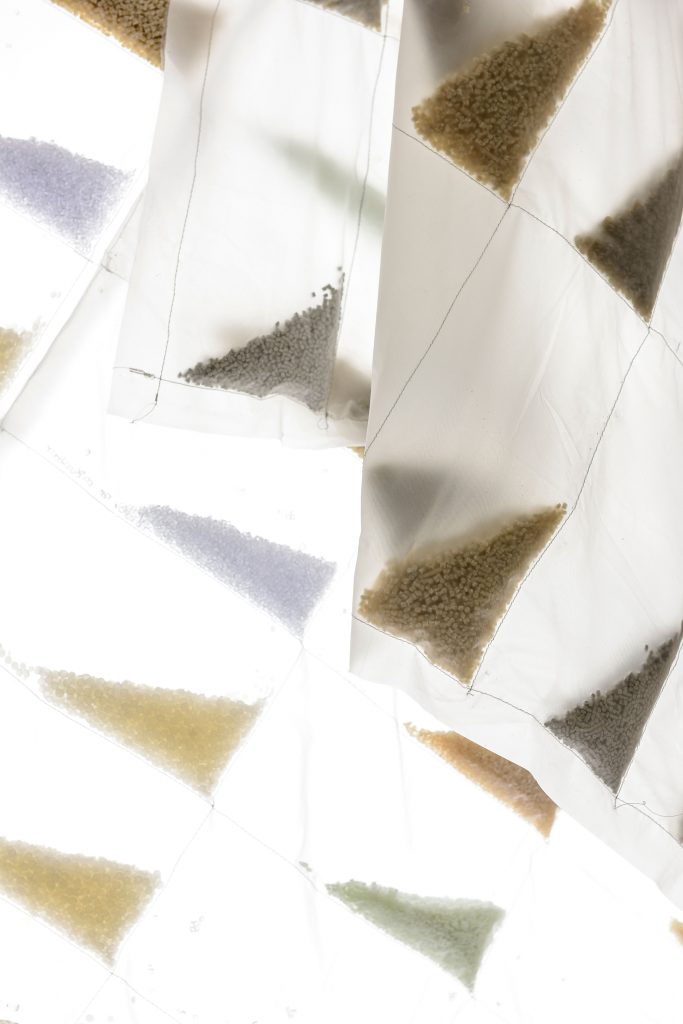 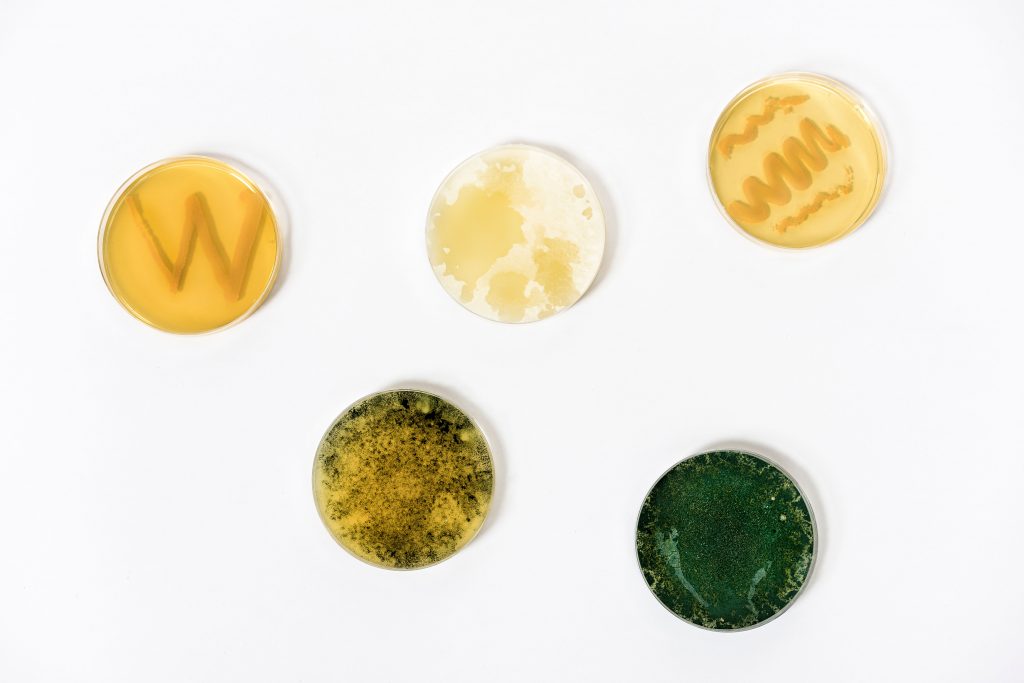 BIODEGRADABLE Pathway: Cultures of microorganisms with potential to break down plastics. Box made of 100% recycled acrylic. 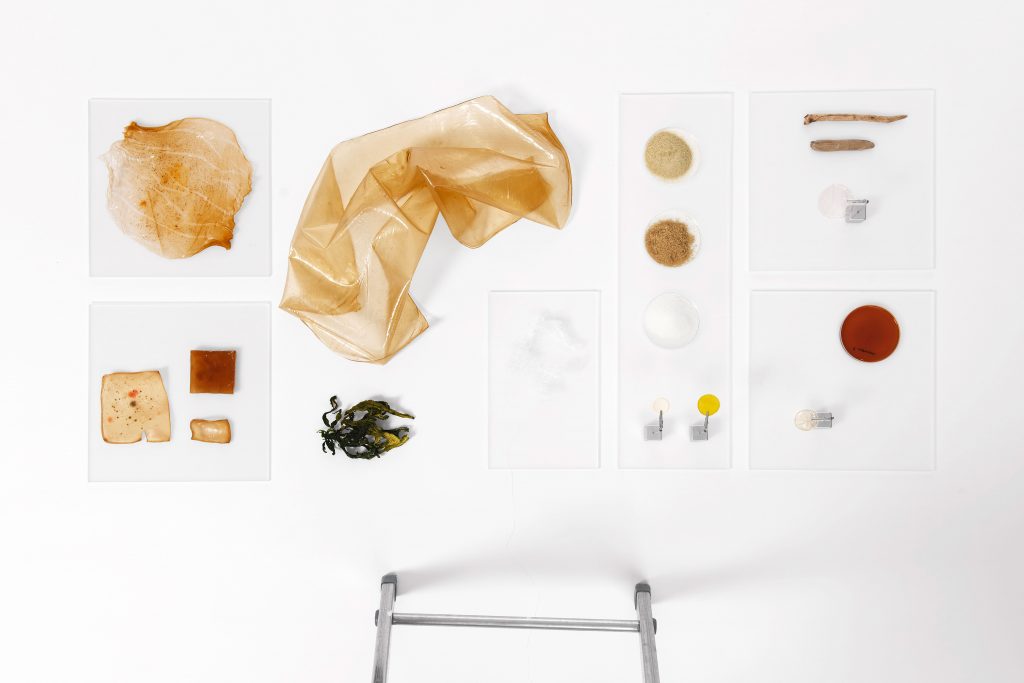 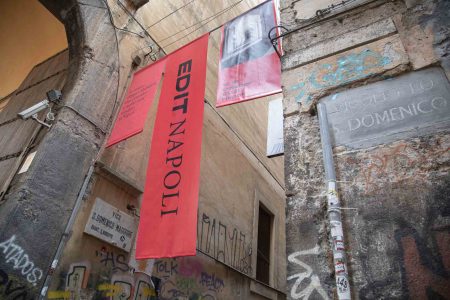 TLmag spoke with Domitilla Dardi & Emilia Petruccelli, founders of the innovative and forward-thinking design fair, EDIT Napoli, a few days before the opening of the 2022 edition. 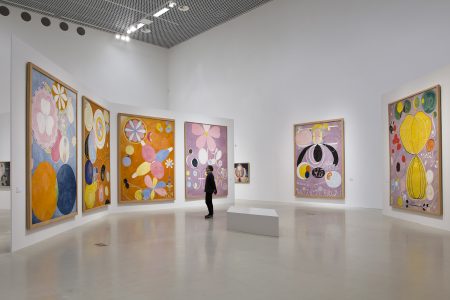 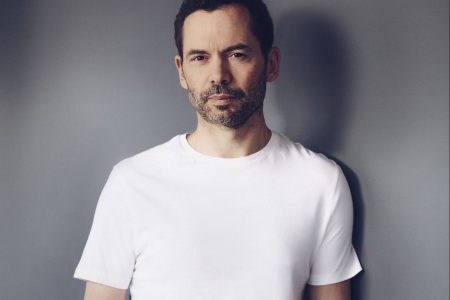