Its head is slightly lowered, sat between its hands and crossed legs. Even though it’s posture is quite solemn, the light that originates from this figure is bright — and introduces the room not only to contrasting shadows but imbues it with its personality. The work detailed above is none other than one of Olga Engel’s light fixtures from her series “emotions”. A prime example of Engel’s work, “emotions” reveals her own character as much as those who wish to have it in their own homes.

Having started off at the Moscow State Textile University (one of the best design schools in Russia) and subsequent schooling at the ’Details’ design school in Moscow and the KLC School of Design in London, Olga is well-educated in not only the manufacturing of textiles but their history as well. Having said that, the Russian designer had already proven herself before schooling, as she had been creating objects since before secondary school; “It just so happened that I grew up in a family where everyone was interested in making things with their hands. I also really liked making things: my grandmother taught me how to sew and knit, and y grandfather had a large shop where I learned how to work with wood and ceramics (my grandfather even made me my own potter’s wheel). Basically, my whole childhood was filled with creation. My first piece of furniture was a tuffet for my room – we made it together with my father. I consider this my first ever piece of furniture”

Over the years, Olga had worked in a variety of practices — ranging from textile design to graphic design, interior design and product design. Each area of design complementing each other, giving new experiences, new ways of thinking, and, ultimately, new ways of expanding her possibilities in her work. Now, Engels’ design language is intentionally and unequivocally personal — as she’s known for combining luxury, minimalism and functionalism as well as paying particular attention to proportion and harmony. As the designer says: “Beauty and harmony are treated on an equal footing. An object can only be beautiful if it is animated by a powerful idea or an emotion”.

As she speaks about her works, from the ironic notion of the person-like lamps in “emotions” or the playful curly wool-aesthetic of her chairs (and their title) “who are you” — Olga sees more than “just” the physical materials that are used to create them. Stating that in every object there must be an internal “filling”.  Looking at the object, one needs to see the character of the work, and it must invoke some kind of emotion. “I try to give every work a certain character, and I feel that a design is successful for me when I get “feedback” from my own works – when they start to “speak” to me”, says the designer. If the work does not succeed in fulfilling this task, it gets thrown out. As for the fact that the emotions that play into her works are specifically happy ones, she says: “Every one of my works is born from my experiences, emotions, and memories. I feel it is necessary that every one of my works carries a positive emotion because I think that all people want to get is just that: positivity.”

In the case of her large scale Bisquit porcelain works titled “Zephyr” and “Yeti”, the equally important ingredients of emotional memory and craftsmanship are in full force. United under the common title of “memories of experiences”, each of these works contains 750 to 4500 porcelain drops, with each drop mounted separately (by hand) and able to move independently from one another. Each porcelain drop is a metaphor for the collection of all of our experiences during the lives we have lived, Olga elaborates: “…It’s not a memory of the events themselves, but more your experience of them – for instance: the smell of a Christmas tree from your childhood, the voice of your mother calling for you to come home, the feeling of your father holding your hand, the smell of freshly baked bread that your grandma was baking, the sound of rain hitting the window, the feeling of happiness from your first true success…”. Olga chose the material because she had worked with it as a child, and came across it as she happened to visit a ceramics factory in Apulia (Italy). To assemble these large pieces is quite a challenge — especially with a temperamental material like porcelain. “ Working with porcelain, one needs to understand that it’s very difficult to make anything large. Because I love large works, I started to think about how to make something large – and came to the conclusion that I could make something huge out of many small pieces. And, that is how the idea for porcelain “drops” was born.”. For the “Zephyr” mirror, for instance, it would take the designer approximately 12 hours of non-stop work. In addition to the hard work that went into it, Olga also wanted to, in her own words, “have some fun and add some irony”. When one comes close to the mirror, it’s actual surface area is quite small, and in the reflection, one can only see their own face. The frame, made of porcelain drops, surrounds their face, making the viewer see themselves as wearing a strange wig of porcelain drops. “I think this is a good reason to smile while looking at the work”, Engel states [and we do too!]. 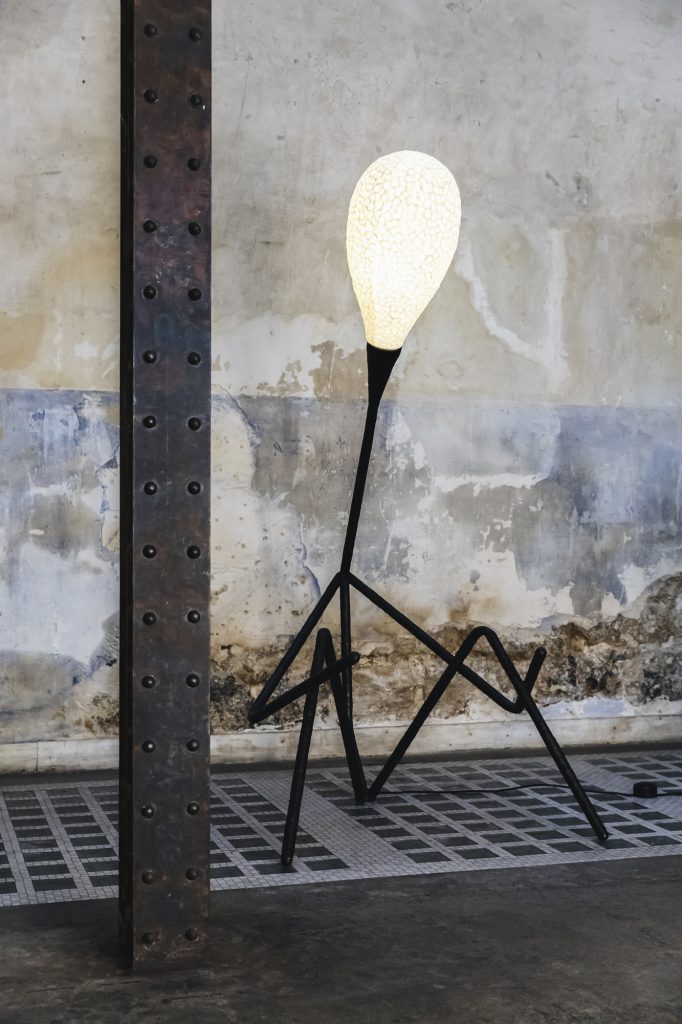 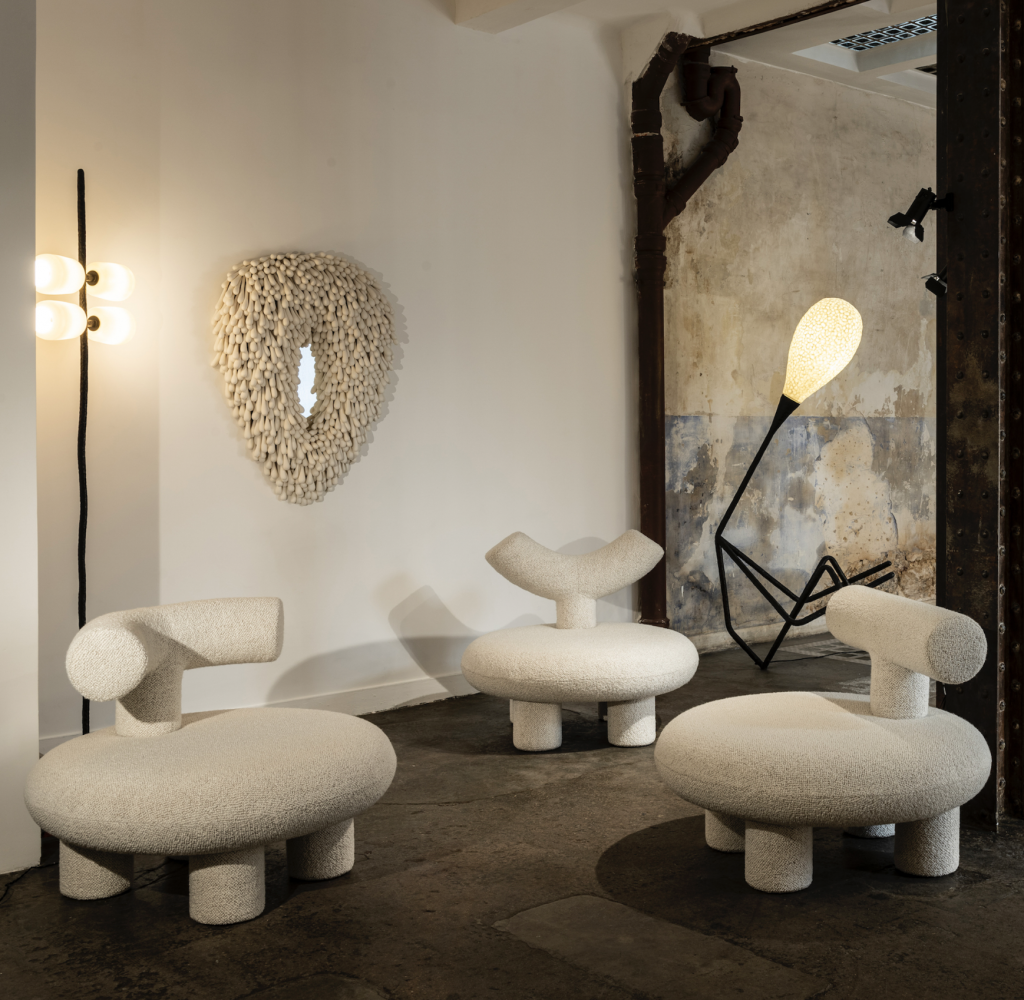 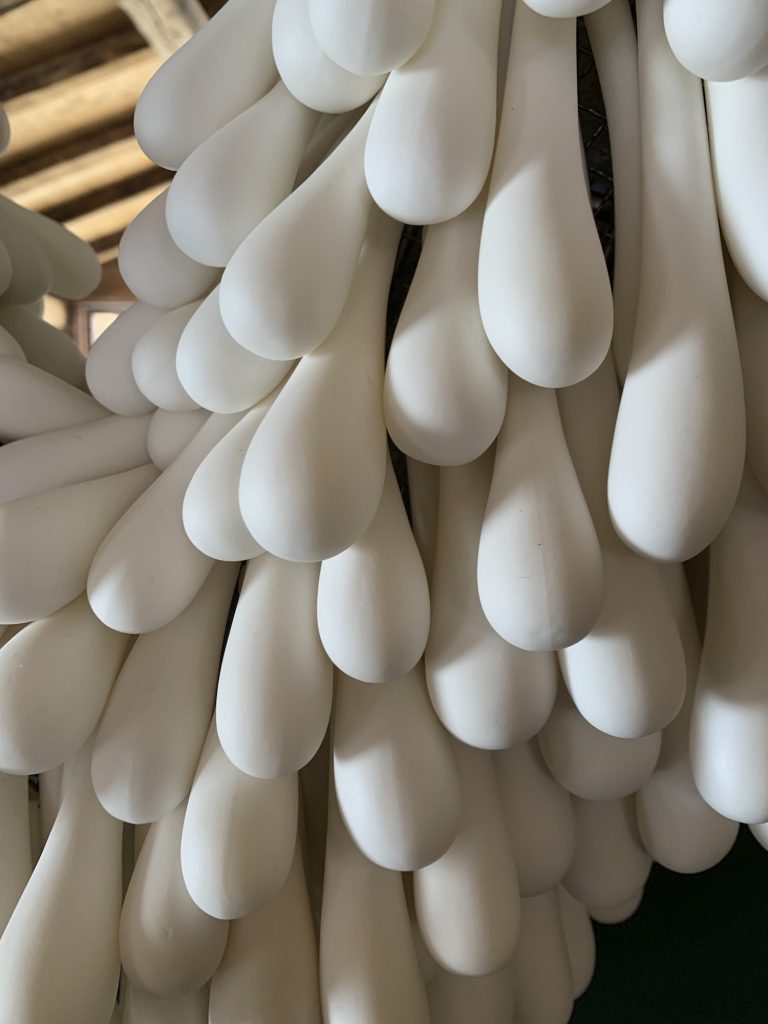 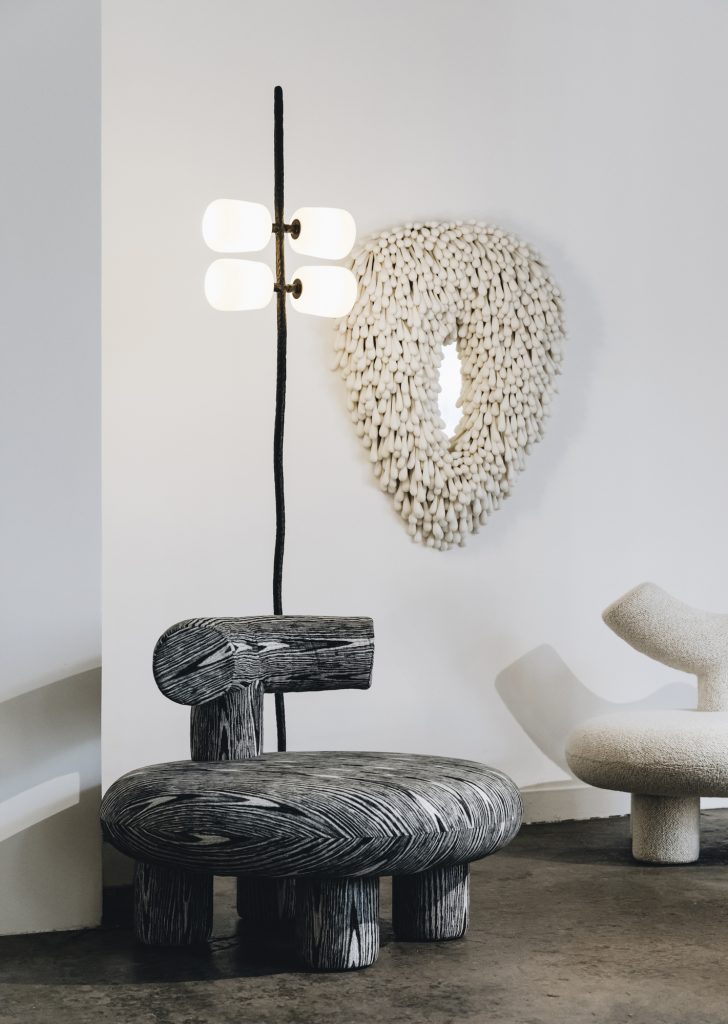 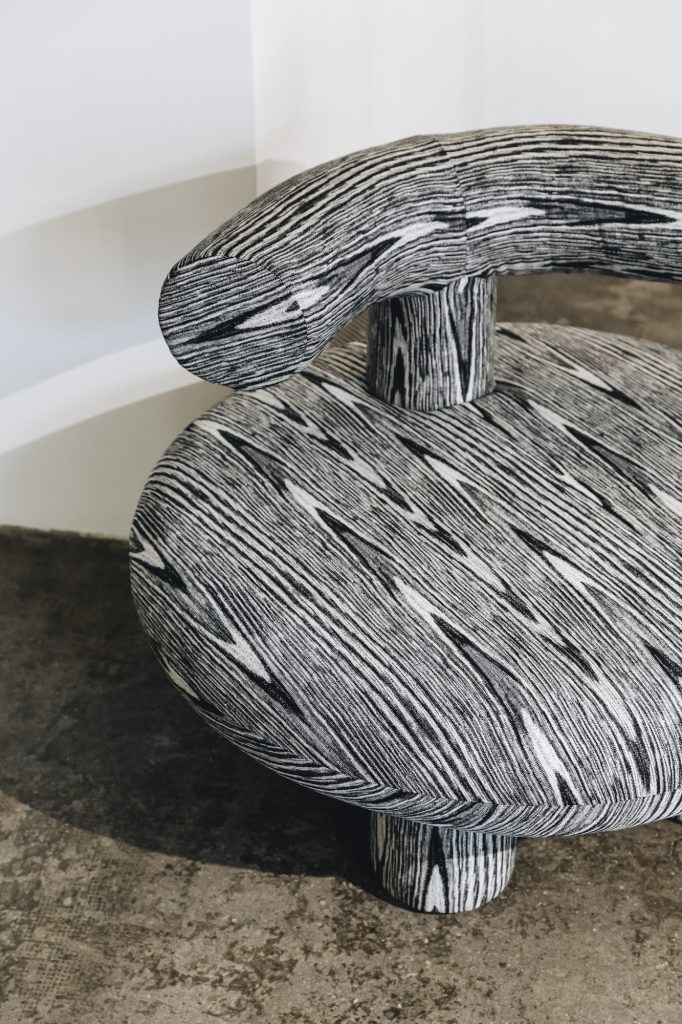 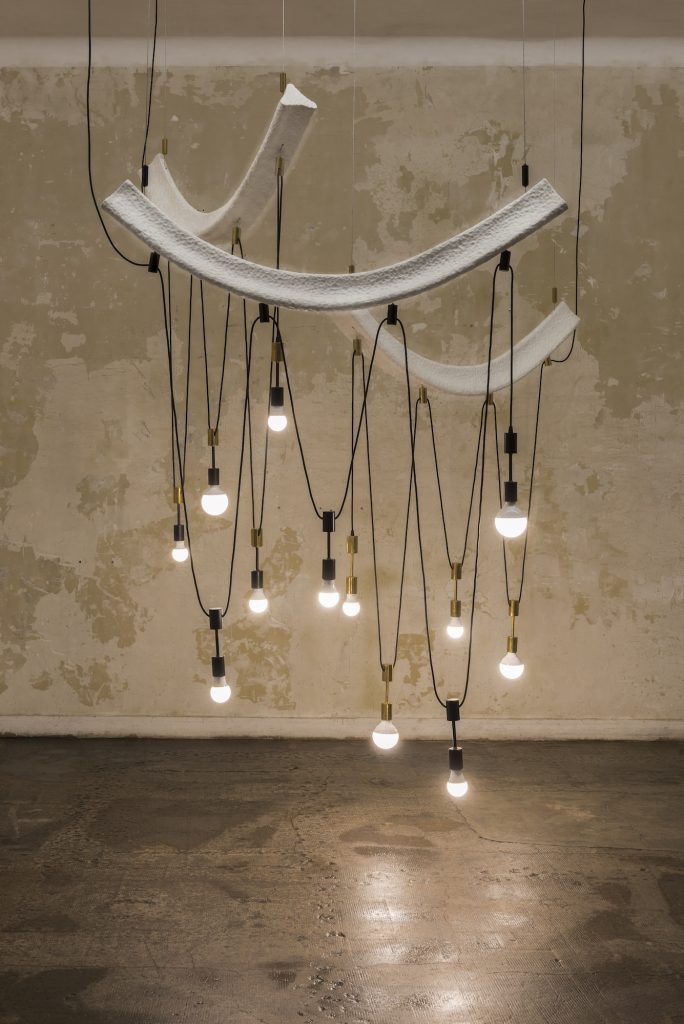 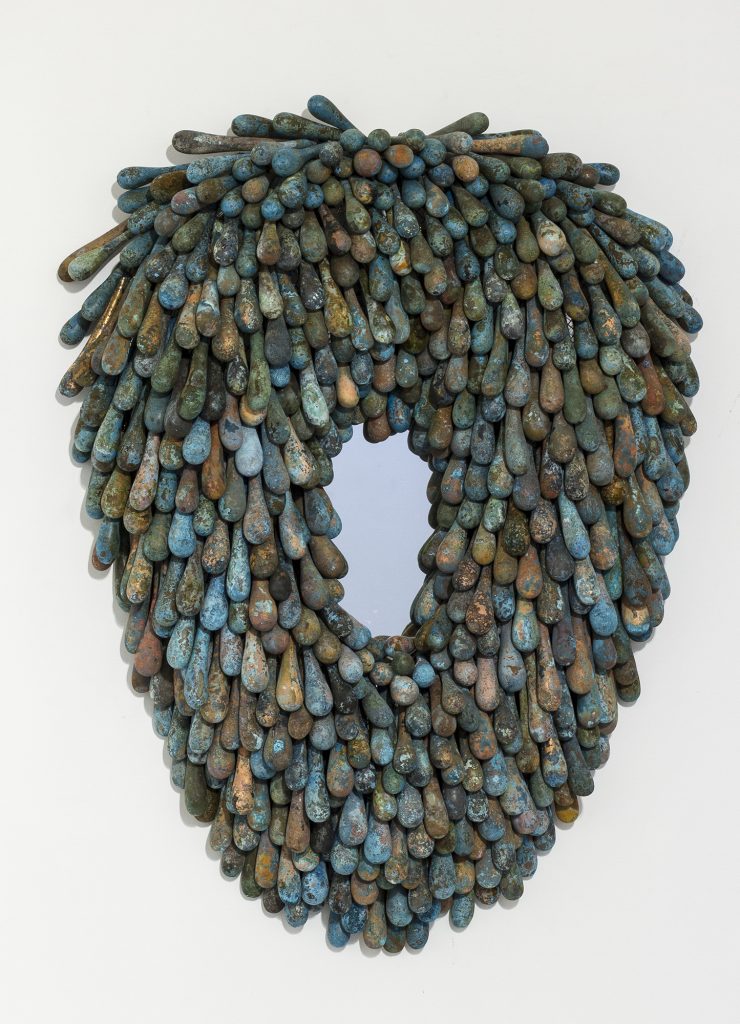 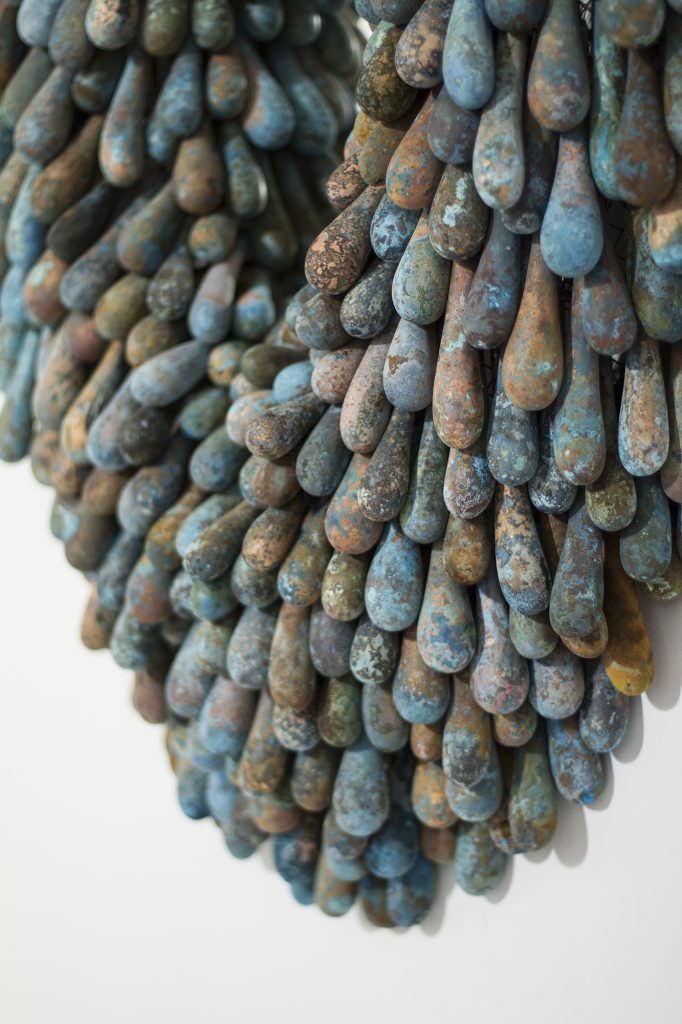 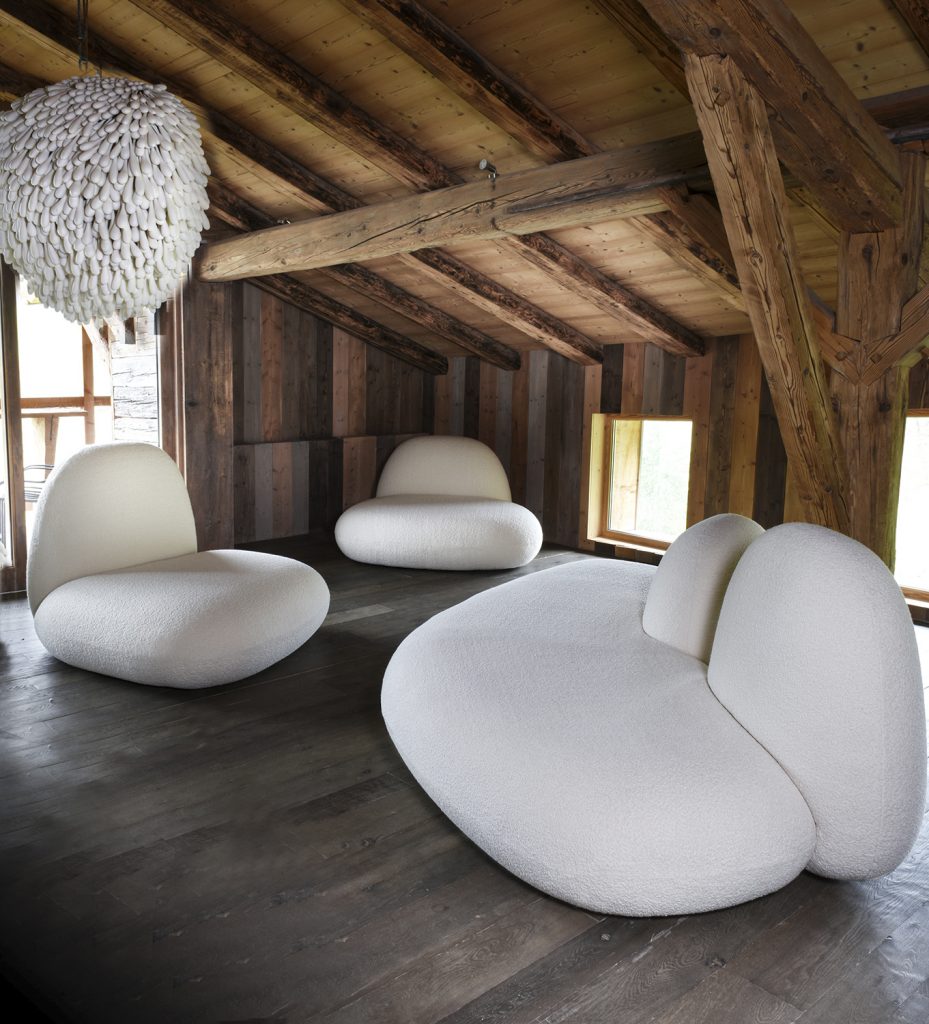 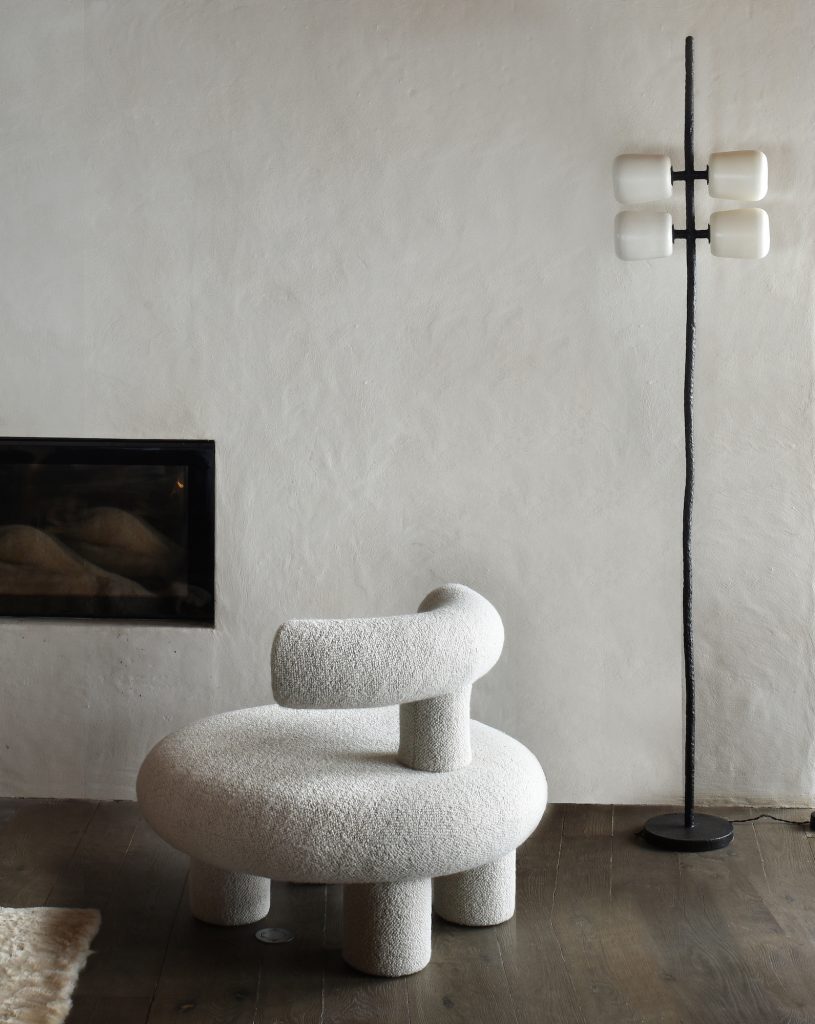