In the solo exhibition Raimund Abraham: Angles and Angels the MAK presents works by the Austrian-American architect Raimund Abraham (1933–2010) until July 19th, 2020. Abraham developed his oeuvre through a close interweaving of art, philosophy, literature, and film. Starting out from the drawing as paradigmatic of his creative vision, the exhibition presents some 50 sketches, collages, models, furniture prototypes, and designs—for both realized and unrealized projects—that explore the dynamics of individual and sociopolitical challenges faced by his age.

Raimund Abraham saw himself much more as a theoretician than as a practicing architect. His manifesto Eyes Digging (2001) makes clear his explorative approach to architecture, as well as the significance of visionary writers such as Stéphane Mallarmé, James Joyce, Ludwig Wittgenstein, and Arnold Schönberg for his experimental work in architecture. His elementary, minimalist designs were influenced by archetypical and neo-futuristic primary forms.

In 1967/68, the trio Raimund Abraham, Hans Hollein, and Walter Pichler staged the exhibition Architectural Fantasies: Drawings from the Collection in the MoMA—the Museum of Modern Art in New York—in which Abraham presented works on issues such as utopia, the city, and the environment. In the early sixties, Abraham also explored the origins of building culture and in his 1963 book Elementare Architektur [Elementary Architecture] he analyzed agricultural buildings in the Alpine region. In exploring the basic axioms of architecture, he sought to delineate an elementary constructional grammar.

Raimund Abraham’s extensive graphic work is the focus of the exhibition. At the beginning of the sixties, he created sketches and collages for visionary rooms, buildings, and utopian city models, exemplified in a wide range of exhibits. The geometrical forms of the colored collage Ohne Titel [Untitled] from the sixties, for instance—with their evocations of earth, water, and air—suggest a futuristic landscape.

Megabridge (1964), Continuous Building Project (1967), Universal House (1967), and Moon Crater City (1967) exemplify Abraham’s studies on “linear cities.” They describe architectonic environments related to the classicistic revolutionary architecture and manifestos of the sixties—to space exploration and the modular designs of the British architecture collective ARCHIGRAM (1963–1974). The ideas in these projects were further developed by Abraham in the unrealized 1991 Kugel-Projekt [Sphere Project] for the MAK Terrace Plateau in the Museum Garden.

Raimund Abraham networked both nationally and internationally with artists, architects, and movie makers, including Hermann Nitsch, Dieter Roth, Peter Kubelka, Walter Pichler, Hans Hollein, Vito Acconci, Peter Eisenman, and Lebbeus Woods, as well as movie director Jonas Mekas. Mekas created a six-hour homage to Abraham in his 2013 Scenes from the Life of Raimund Abraham, that will be shown as part of the exhibition’s supporting program on 31 Mar, 11 Apr, 2 Jun, and 4 Jul 2020 in the MAK Lecture Hall.

A fine example of Raimund Abraham’s playful approach to geometry, arithmetic, and proportion is his unrealized project House for Euklid (1983), in which architecture is grasped as movement and mechanism, giving form to kinetic space and the potential dormant in infinity. Abraham demonstrated the power of political symbolism in architecture in his 1981/82 sketch Kirche an der Berliner Mauer [Church on the Berlin Wall]. This unrealized project may be read as symbolizing the social unity of Germany and Europe.

Raimund Abraham’s major work, the spectacular new building for the Austrian Cultural Forum in New York dating from 2002, is one of the most significant contributions to contemporary architecture in Manhattan. Christoph Thun-Hohenstein, from September 1999 to August 2007 Director of the Austrian Cultural Forum—an institution founded by private initiative in 1942 as a center of resistance to the National-Socialist regime—accompanied the completion and opening of the new building and was responsible for the Forum’s program until 2007. Abraham, who trenchantly described the skyscraper as a “guillotine,” broke up the monotony of the slender 84 meter high and 7.5 meter wide building with stag- gered façade elements and a surreal interplay of glass, aluminum, and zinc surfaces.

As one of his late works, Raimund Abraham planned the posthumously completed Haus für Musiker [House for Musicians] (1996–2010) as part of the Hombroich Museum Island project on the site of the former NATO missile base in Neuss, Germany. “The structure is not a building but a city for four inhabitants. The basic idea behind the structure is determined by an equilateral triangle. Triangle and circle form the focus. When architecture approaches sculpture, you get art,” said Abraham of one of his last designs.

The exhibits in RAIMUND ABRAHAM: Angles and Angels. Drawings Models Prototypes originate for the most part from the archive of Una Abraham, as well as from the collection of the Architekturzentrum Wien and the MAK Contemporary Art Collection. In the context of the current COVID-19 crisis, these institutions are closed for the foreseeable future. 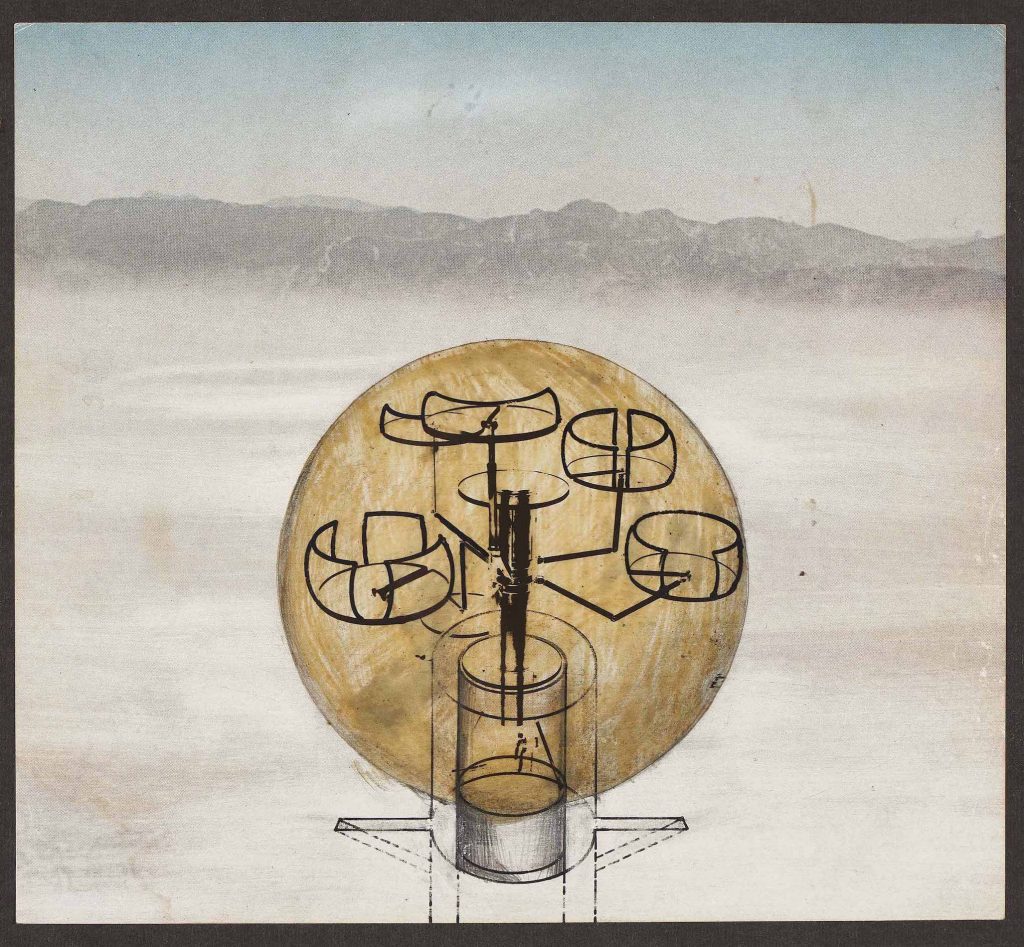