Claire Fayolle and Samy Rio were invited by the Musée du Louvre-Lens and Lille—design to curate the Louvre-Design exhibition, which resonates with the title of World Design Capital bestowed upon Lille this year.  The exhibition is on show from 7th October 2020 until 1st of February 2021 and the theme – a dialogue between items from the Louvre and products from the field of design – imposed right from the outset a particular format that would place viewers close to the objects while enhancing the subject. TLmag sits down with Samy Rio to explore the narrative and research he conducted.

TLmag: Could you take us through the narrative of the exhibition through the different ‘chapters’ that have been developed such as measuring, mass production, decoration, the home, transmission, and dissemination of knowledge?

Samy Rio (S.R.): Those chapters were created to facilitate the circulation in the exhibition and its global understanding. The exhibition speaks of design so I did not want to show any object of cult, only « neutral » object of use. So all the dialogues of the exhibition are related to the domestic world and most of the objects of use that are present in the Louvre collections were found in tombs, temples, only a few in houses. Most of them were put into tombs to accompany the deceased in the afterlife so most of them are simple daily objects. The chapters of the exhibition were then established after all selection of objects was done to light up the design practice through ages, even before the word design was invented. The transmission and the dissemination of knowledge and the measuring are tools of design that have been helping craftsman and creators make their art evolve and to share it through generation. The crafts then evolve into industry and mass production so the design appears. The ornament is a common thing to all civilizations through different periods and everywhere on the planet when humans reach enough technicity to ensure the survival of the kind they start decorating and sophisticating their environment. And all of those notions are taking place in the domestic entity: the house.

TLmag: You came into the design collection of the Louvre, and perceived their collection; What (methodological) approach did you decide to take in your curatorial research?

S.R.: I’m not sure if there was any methodological approach actually. When you have a carte blanche to choose objects from the entire Louvre collection its super exciting but also a bit frightening. So after the choice was made to stay focused on objects of use and to not put any object of art or cult into the exhibition the selection process was really intuitive. We met several times with Claire, the other curator, and we went through all the antique department and intuitively selected things. The selection came from lots of different criteria such as the form, the material, the shape, the color, the patterns… each time it was making us think about a contemporary object we add it to our list then we systematically asked the Louvre conservator all the history and detail of the object. The guideline of all the objects and all the dialogue is permanency. Permanency of uses, of technic, esthetic, matter, pattern, scale…. It was though that really simple observation that we build our final selection around the idea that the practice of design always has been there, so long before the word was invented.

TLmag: Would you say your relationship with the objects changed over time? If so, how?

When the Louvre came to me with this proposition to create dialogue in between objects from an old past and recent ones it was a big chance, and also an opportunity to question my own relationship with objects and with my practice as a designer. Pieces of design or art do not surround me, but  I’m constantly thinking about and working with objects. I think I’m passionate about how objects are made how humans technically give birth to objects, but then when it comes to owning it I’m getting bored quickly. Working on this exhibition gives me access to information about technics and productions method so ancient that only a few people in the world know about them, for me it was heaven. That’s where this idea of permanency came from. I wanted the exhibition to be really simple to look at and to understand, and then, if you feel interested in the dialogue you’re seeing, you can have another level of reading. Putting a terra-cotta cuneiform tablet in front of a Kindle can look obviously simple, and it is. The 2 objects have the same size, same format, and are made to read. One is only one text, on the other, you can have 1000 books. One came to us through 6000 years in a perfect state of conservation and we can steel read, I doubt that we can say the same about the other one in 200 years. That’s the second layer of reading that you can have on all the dialogue that we propose.

TLmag: You were not only present as the curator but also as a scenographer. Could you take us through the process of translating your narrative to the design?

S.R.: I worked on the scenography with 2 main goals: we can’t do a temporary scenography that will be destroyed after the show, so I worked on a completely recyclable and re-usable setup. The second point was to be as minimalist as possible so the visitors forgot the setup and just look at the objects and at the environment. The exhibition takes place in a special room of the Louvre-Lens called the glass pavilion, it is a 1000m2 space with only glass walls in the middle of the museum garden and the interaction between inside and outside is constant. The scenography I proposed works as a discrete laboratory of observation in the glass pavilion. Each module where the objects are showed are built on the same principles: the legs are a grid of extruded aluminum profiles, on top, you got a little pedestal (made out of painted wood) l for each object, and a window (coming from the Louvre stock). All the modules have the same height and work as one level in the space where the objects are floating. The choice of aluminum for the majority of the set up is to refer to the material than Sanaa build the pavilion with and also because its a highly durable and recyclable material. The point was that if the Louvre did not want to save the stenography all the components could be separated as materials and so recycle, or if the museum wanted to keep the module they could re-use it as tables or storage for their different department. They finally choose to keep all of the scenography as the future permanent set up of the glass pavilion. 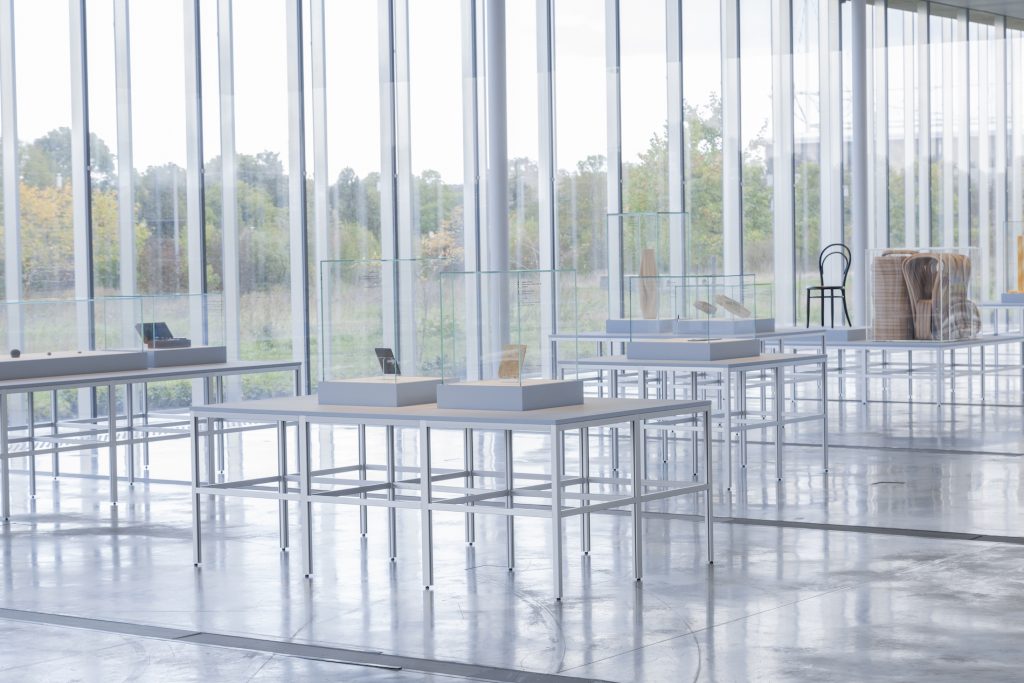 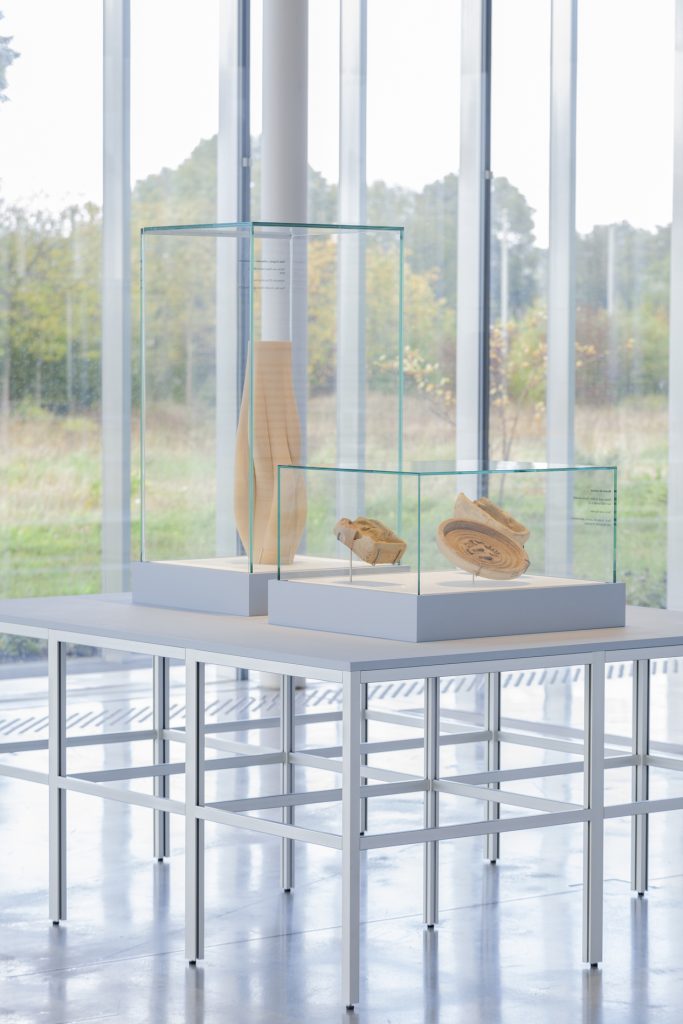 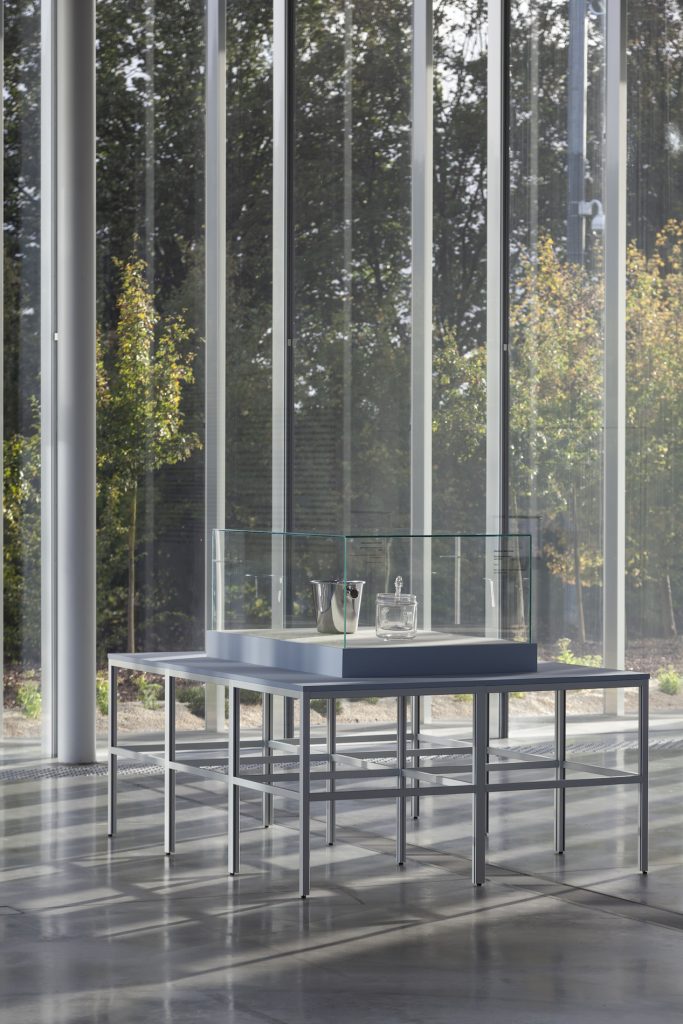 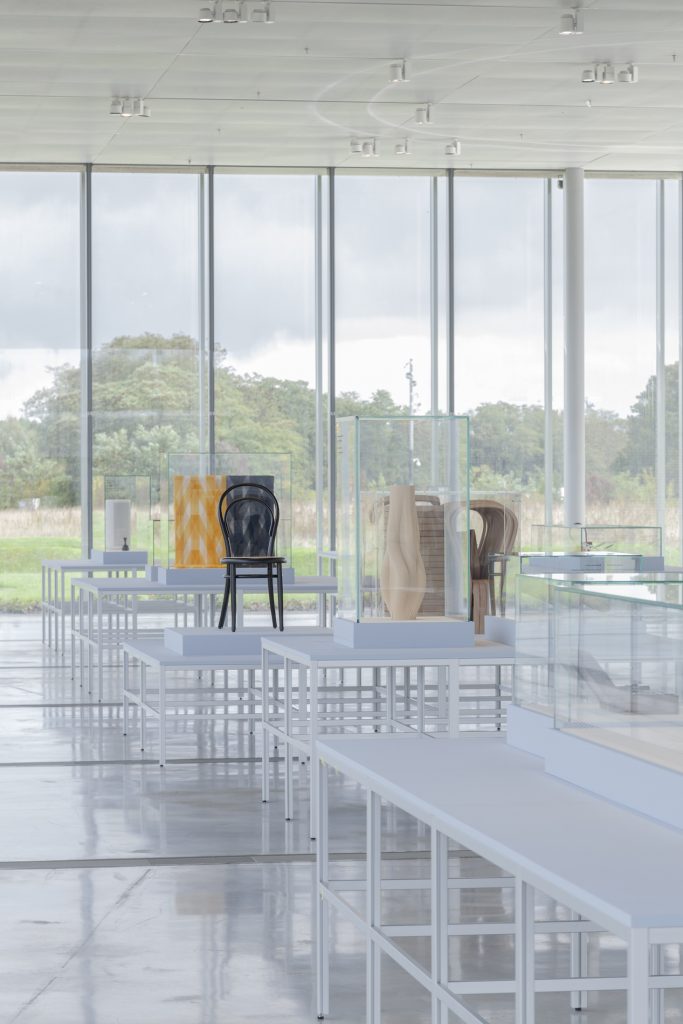 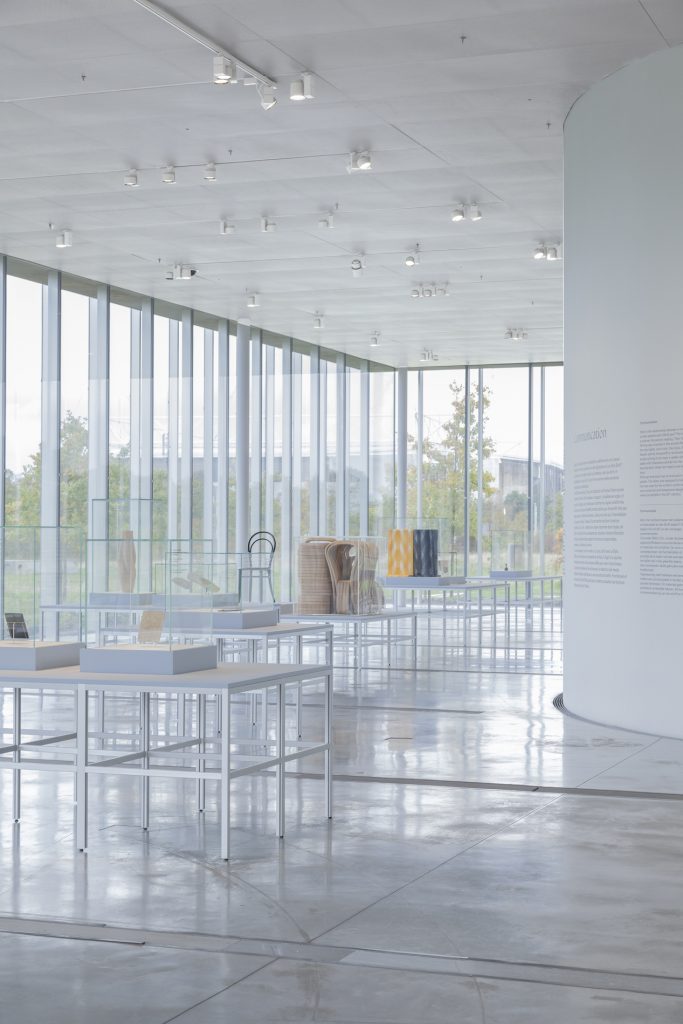 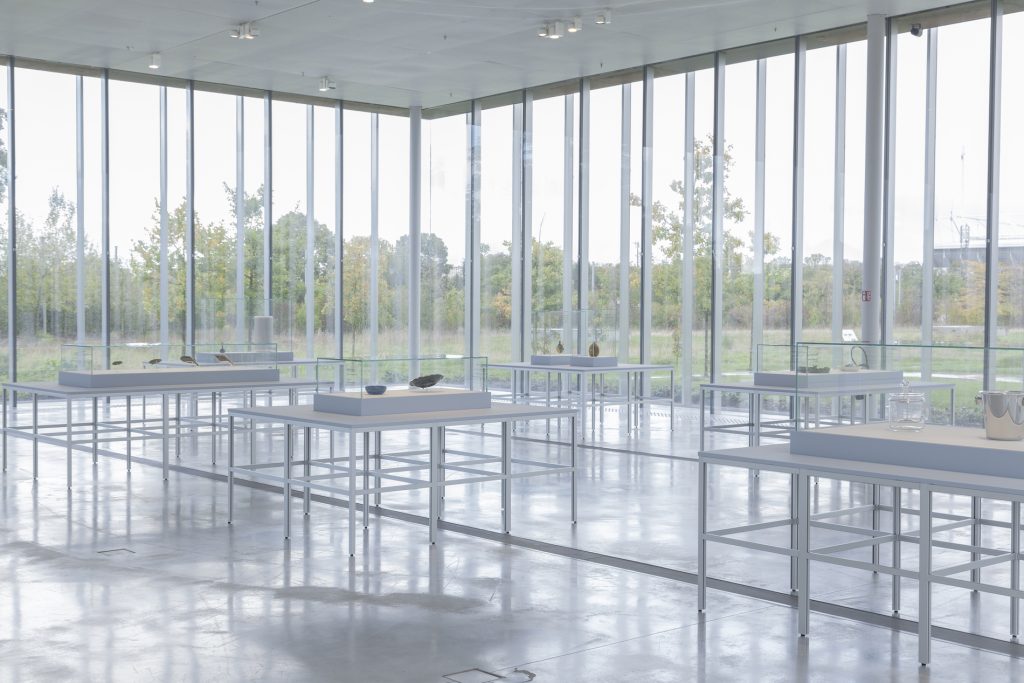