The Taiwanese craftspeople were specialised in Koji pottery, bamboo bending, lacquerware, ceramics and indigo dying. Add seven designers from France, Germany, Israel, Japan, South Korea, Sweden and Switzerland, and a Belgium-based curator —our own editor-in-chief, Lise Coirier. The result is A New Layer II: Crafting Identities/Design Stories from Taiwan, a project led by the National Taiwan Craft Research and Development Institute (NTCRI) aimed at fostering partnerships between Taiwanese and international designers and craftspeople.

The guest designers traveled throughout the island for several weeks, visiting both the craftspeople’s workshops and a detailed list of sites of cultural and historial significance in Taiwan. “The overseas designers and Taiwanese craftspeople worked together to conceive, materialise, and finalise their design, with the craftspeople revelling in the numerous challenges, and new visions presented to them in their craft by the designers,” explained Lise Coirier.

These partnerships and the research experience resulted in a series of cutting-edge design concepts, like The New Koji (Pottery) Collection, a rethinking of classical pottery forms by Swedish-Chilean designer Anton Álvarez and Taiwan’s Zhong-Zheng Chen and Chi-Li Hsiao.

Other projects include the Indigo-Dyed Bamboo Chair, by Japan’s Jin Kuramoto and Taiwan’s Jian Cheng Lin and Wen-Chun Tang, who combined the bamboo-bending process with the indigo-dying technique. A Cong vase in the National Palace Museum inspired The Cong Collection, a lacquerware project by Julie Richoz from Switzerland/France and local Chin-Mei Huang.

The colourful steel bridges peppered around Taiwan were the inspiration behind The Bridge Bamboo Bench, by German designer Sebastian Herkner and Taiwan’s Ming-An Wu. South Korea’s Wonmin Park and local Wen-Yi Kung partnered to create The Clay Table, a joint exploration of large-scale ceramics. Japanese-Israeli BCXSY duo —that is, Sayaka Yamamoto and Boaz Cohen— worked with Jian-Fu Zhong to create The Fruit Tower, a playful combination of the surreal characteristics of the vase collection at the National Palace Museum and the everyday charm of fruit stands.

“The cross-cultural dialogue that has taken place between Taiwanese craftsmen and international designers during the course of A New Layer II has enlightened and challenged both,” said Keng-Hsiu Hsu, the director of the NTCRI. “We are really pleased to see that all the participants in the project enjoyed the process, with the designers bringing a contemporary mindset to high-quality Taiwanese craftsmanship. A New Layer II has not only pushed the boundaries of both craft and design in Taiwan, but also created tangible objects and furniture that the general public can engage with.” 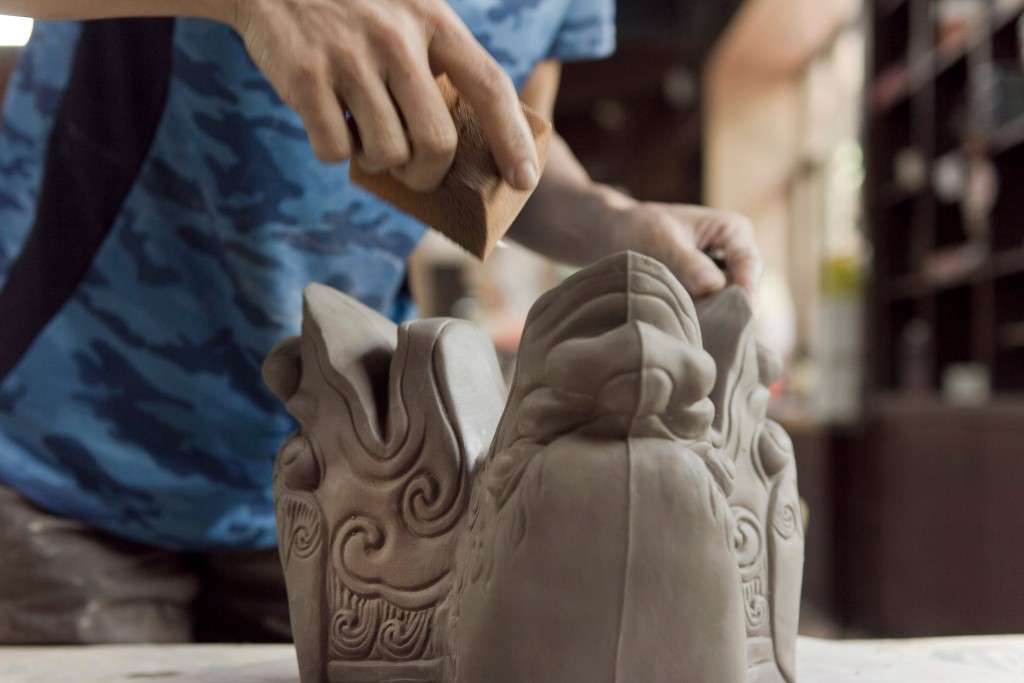 The process behind The New Koji Pottery Collection, by designer Anton Álvarez and craftsmen Zhong-Zheng Chen and Chi-Li Hsiao from Taiwan 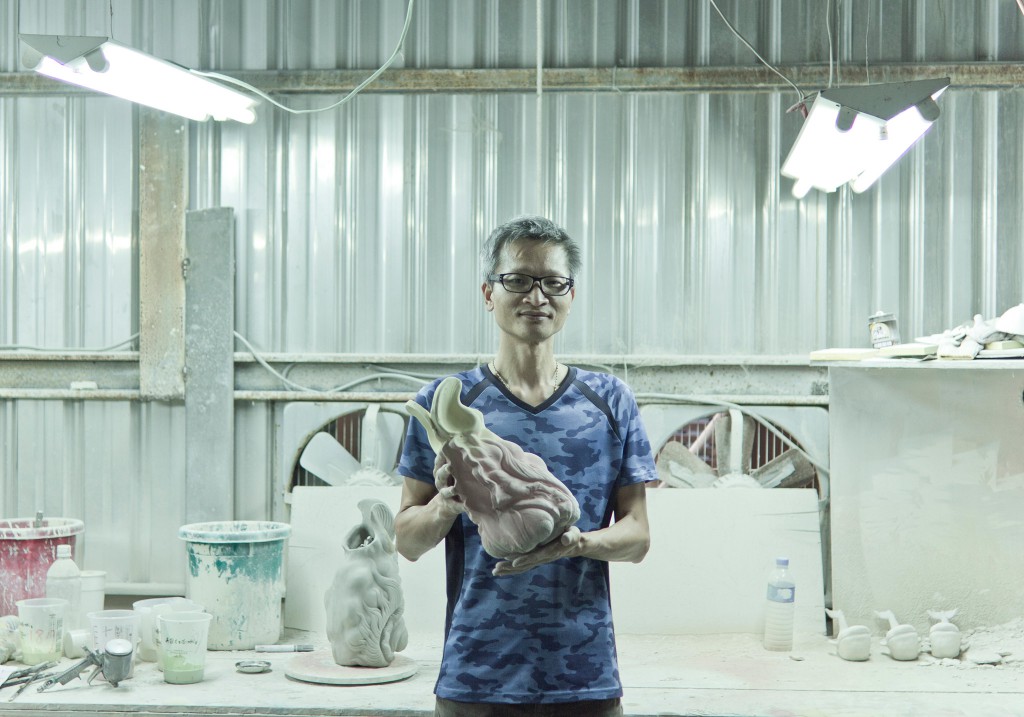 Modelled, cut and deformed to slightly become both decorative and functional pieces, the vases are freestanding and find their own visual and physical balance while modelling the clay before drying and firing it. 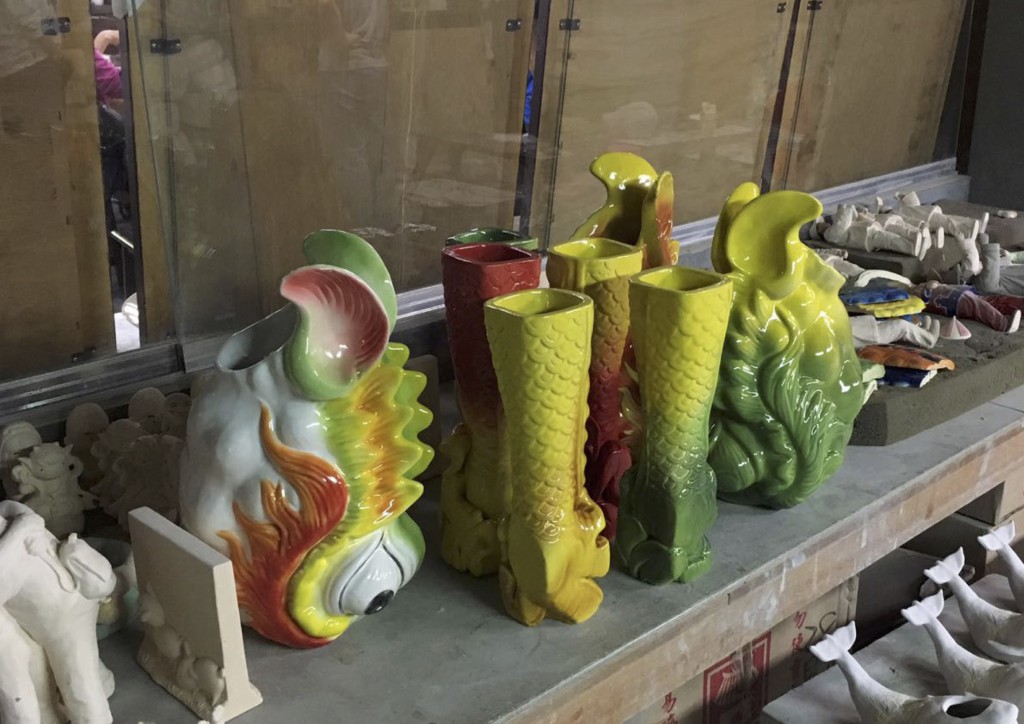 Álvarez was inspired by the forms and symbols, as well as the handmade process that has been kept alive in Koji pottery thanks to the factory and to the museum. He has created four different shapes of contemporary vases revisiting the classical forms of the traditional Koji bestiary, made of dragons, elephants and tigers. 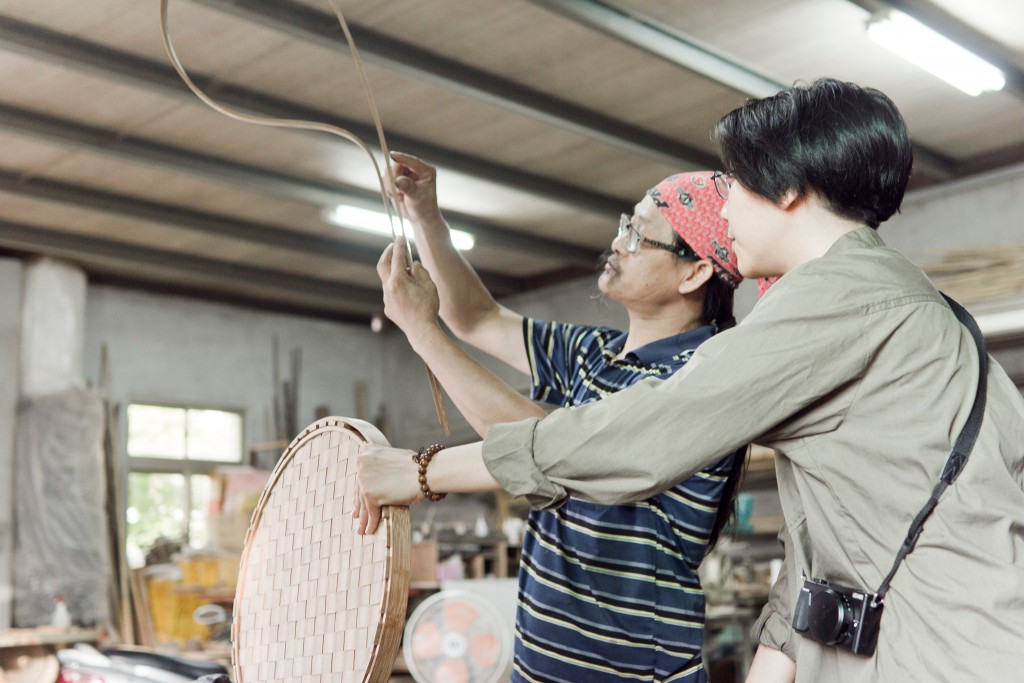 Working on The Indigo-Dyed Bamboo Chair, by designer Jin Kuramoto from Japan and craftspeople Jian Cheng Lin and Wen-Chun Tang from Taiwan 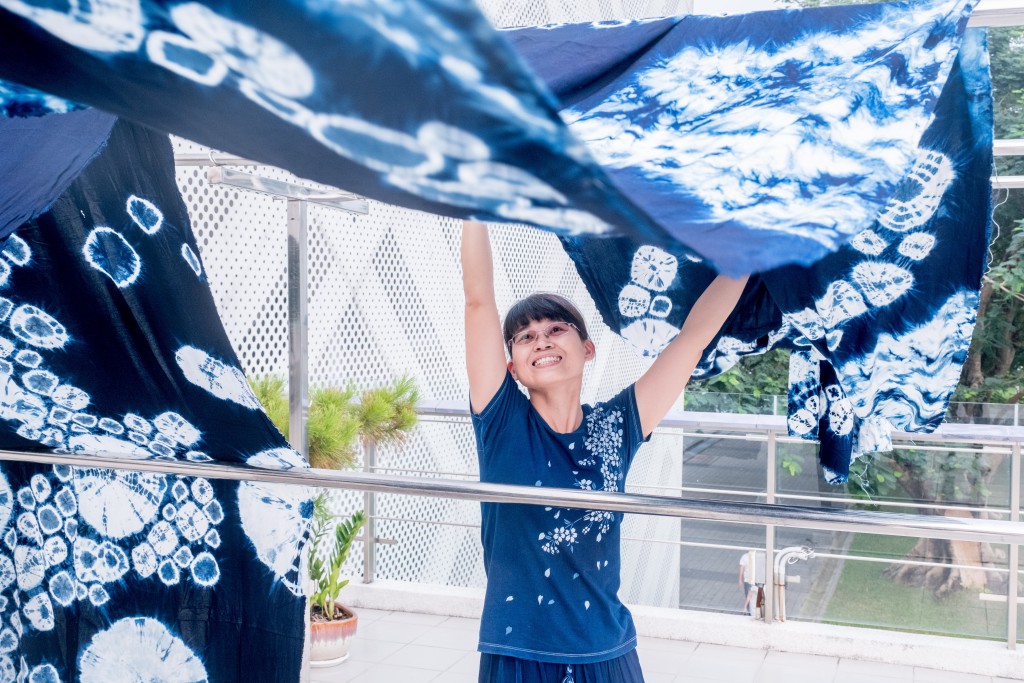 By combining both the handmade bamboo bending process to the natural indigo-dyed technique normally applied to textiles, the Japanese designer Kuramoto has conceived a new kind of furniture typology. 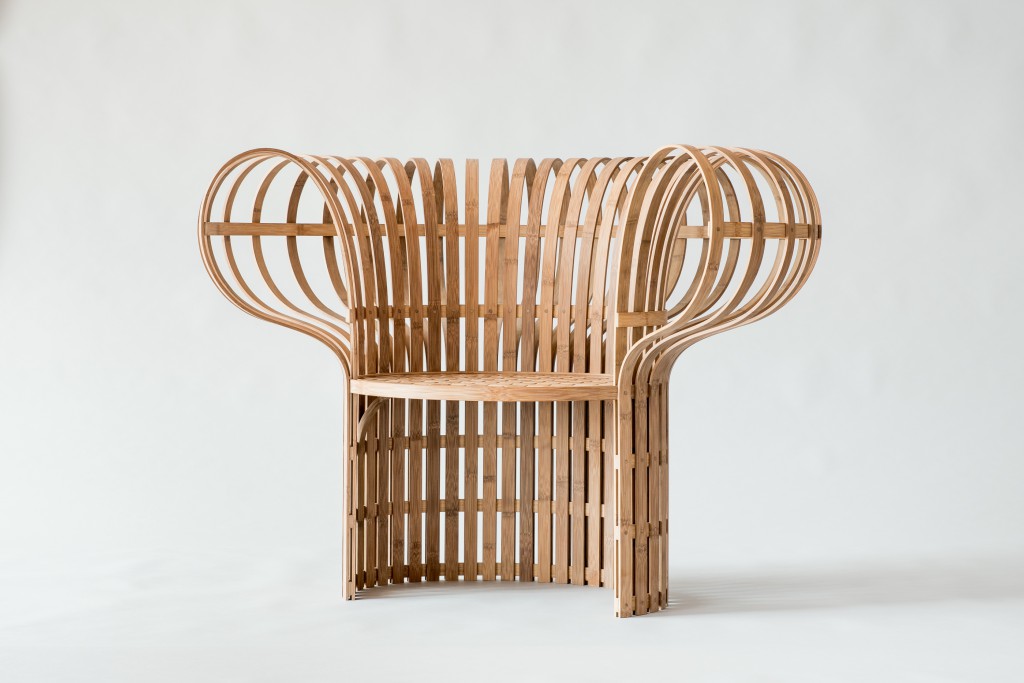 Employing bamboo bending, which is certainly one of the highest quality technique in Taiwan, Kuramoto tailors a new kind of seating. 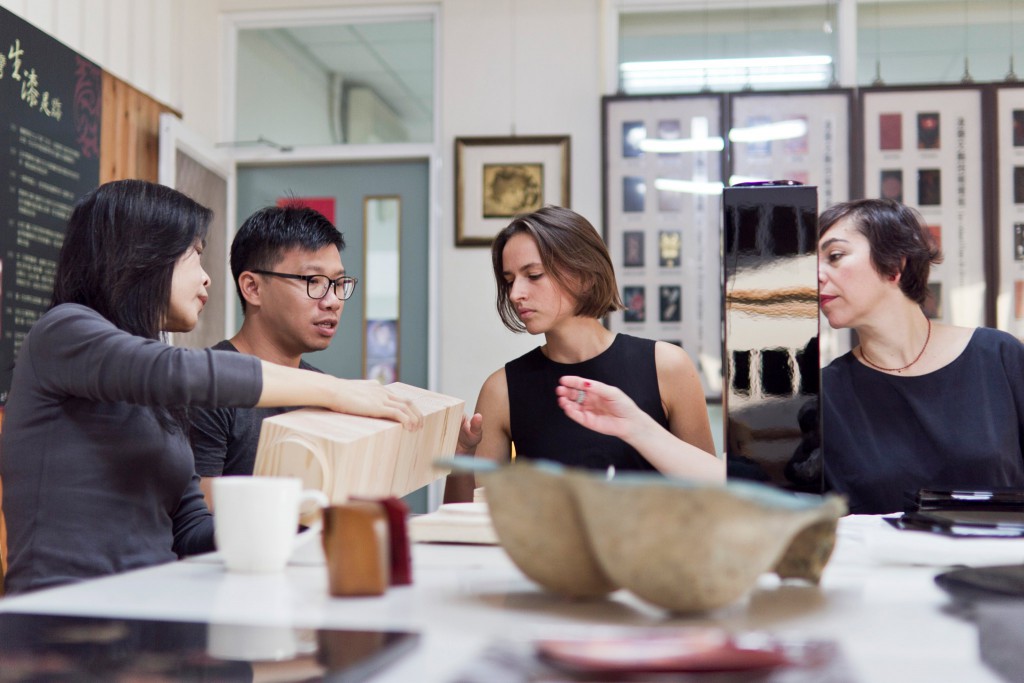 Richoz discovered the Cong vase at the National Palace Museum and was really fascinated by its
shape. She felt in it a very contemporary and timeless design, and was impressed by its aura. She decided to reinterpret the Cong vase with Chin-Mei Huang by using lacquerware. 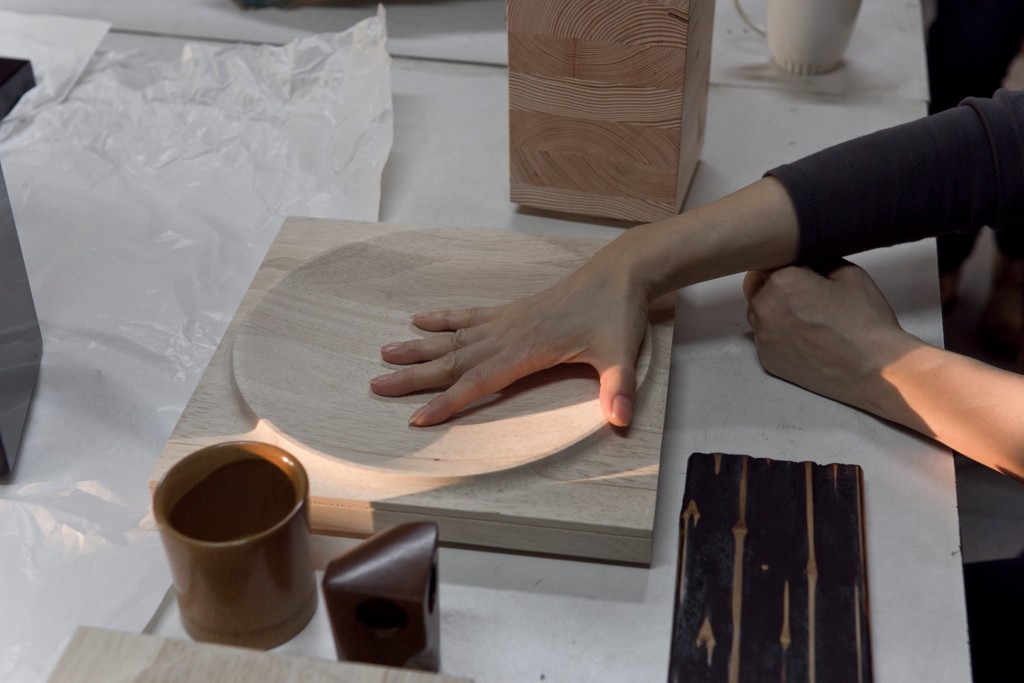 Having never seen this shape with very sharp edges made using the traditional techniques, she knew in advance that it would be a very challenging as well as rewarding experience if she could achieve it. Her main objective has been to create the sharpest appearance including the corners of the lacquerware. 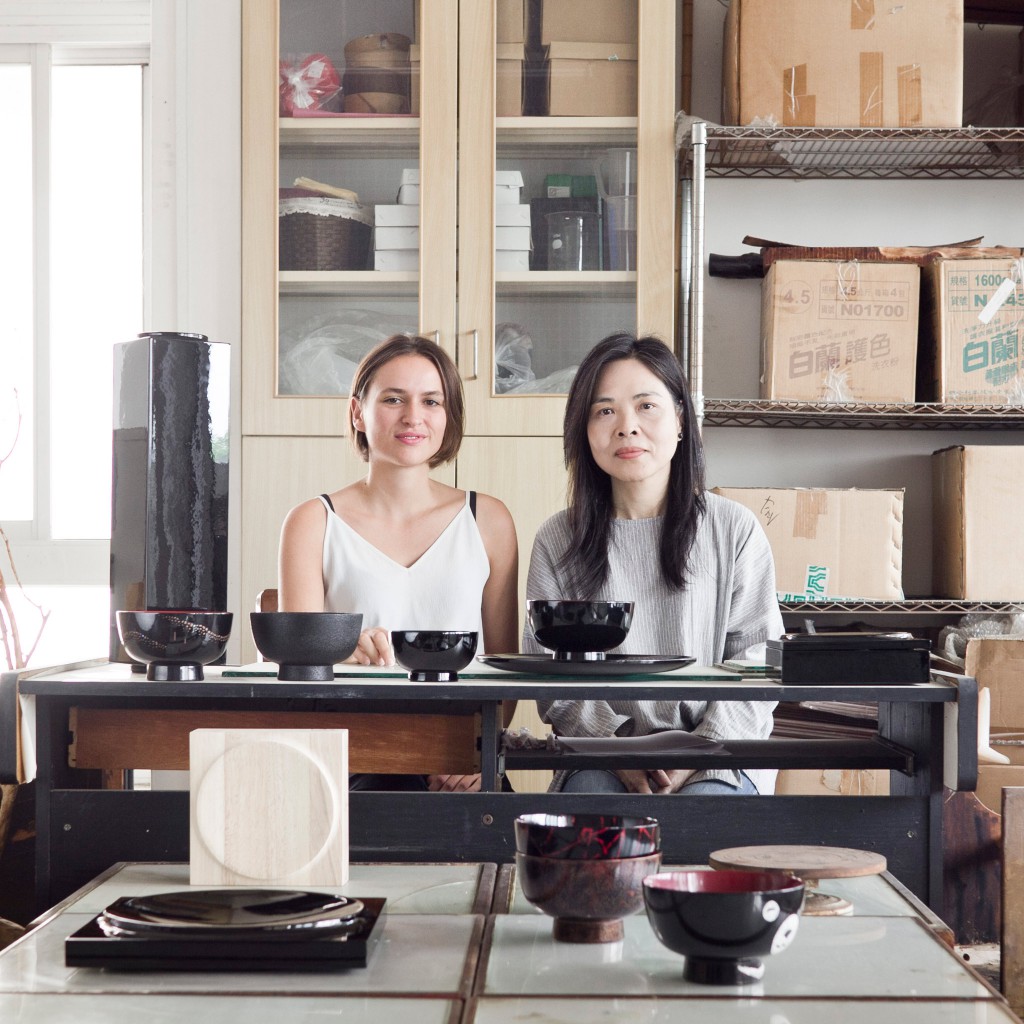 The Cong Collection is composed of three archetypal pieces: a high vase, a box and a tray, tableware elements that play with this game between the circle and the rectangle. 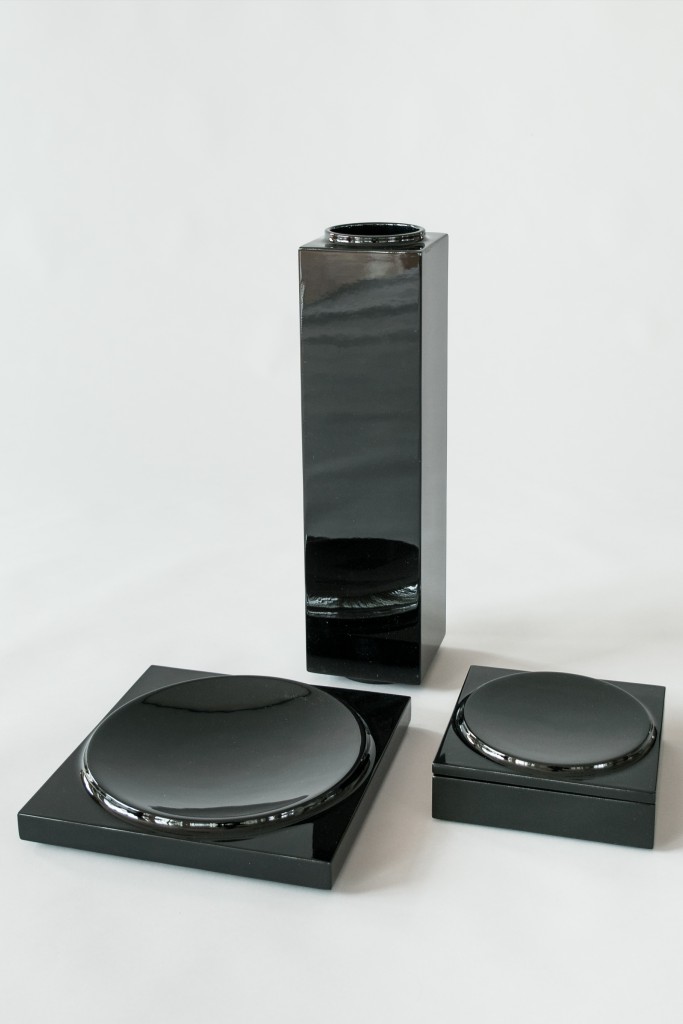 Objects from The Cong Collection 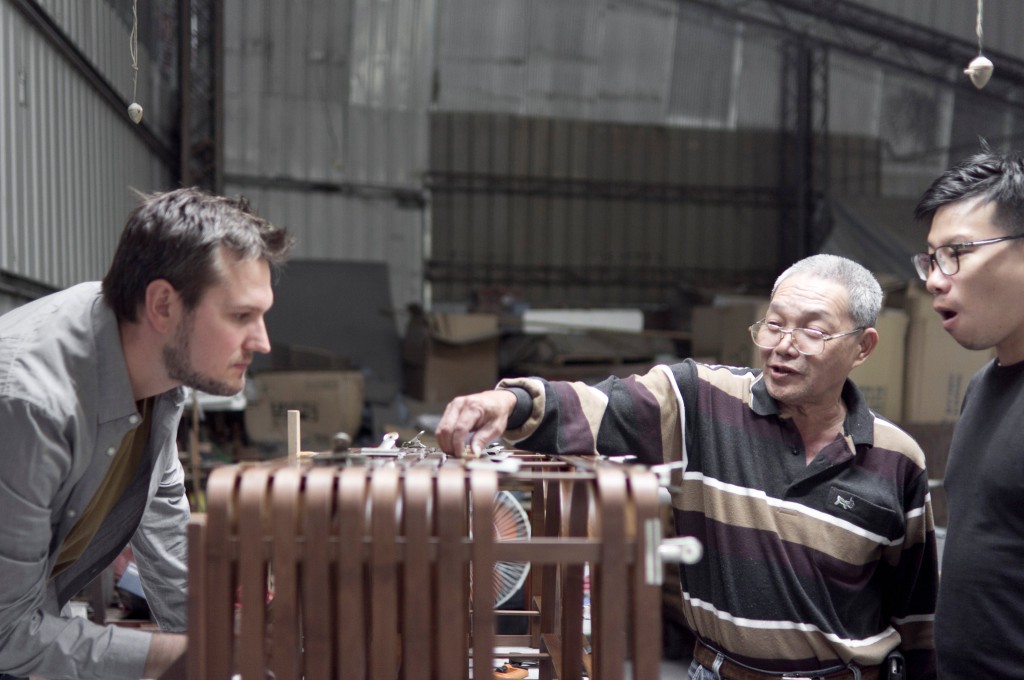 During the visit, Sebastian Herkner was inspired by the number of bridges over the country. His design translates the idea of the bridge connecting people and cultures. 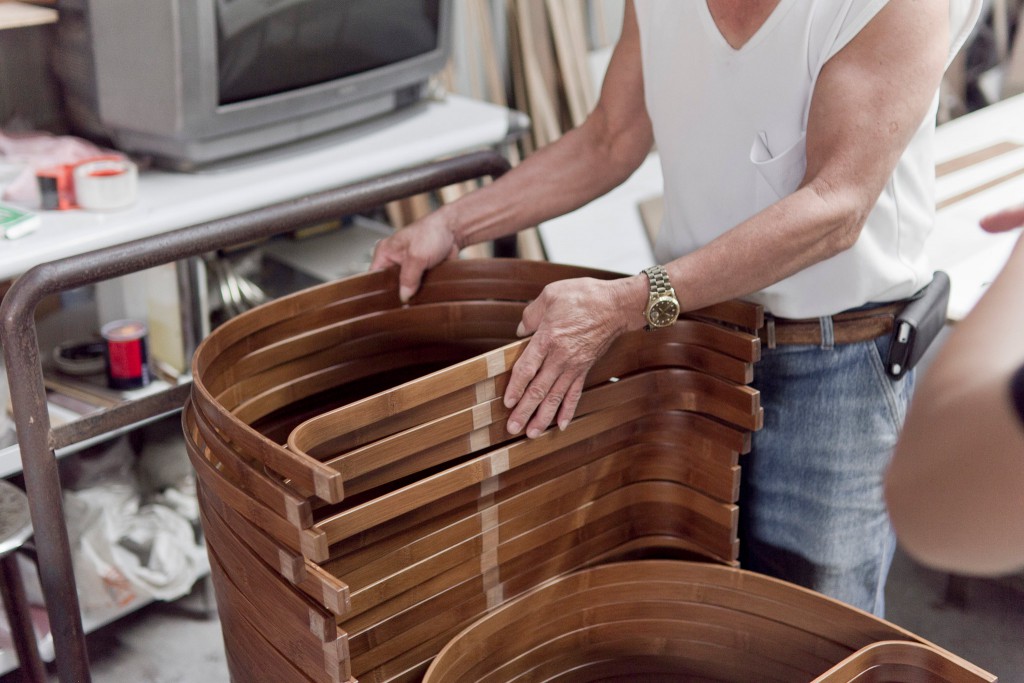 Made in collaboration with the highly skilful bamboo-bending master Ming-An Wu, most of the bamboo bending furniture has its own limited closed loop in order to hold the structure. 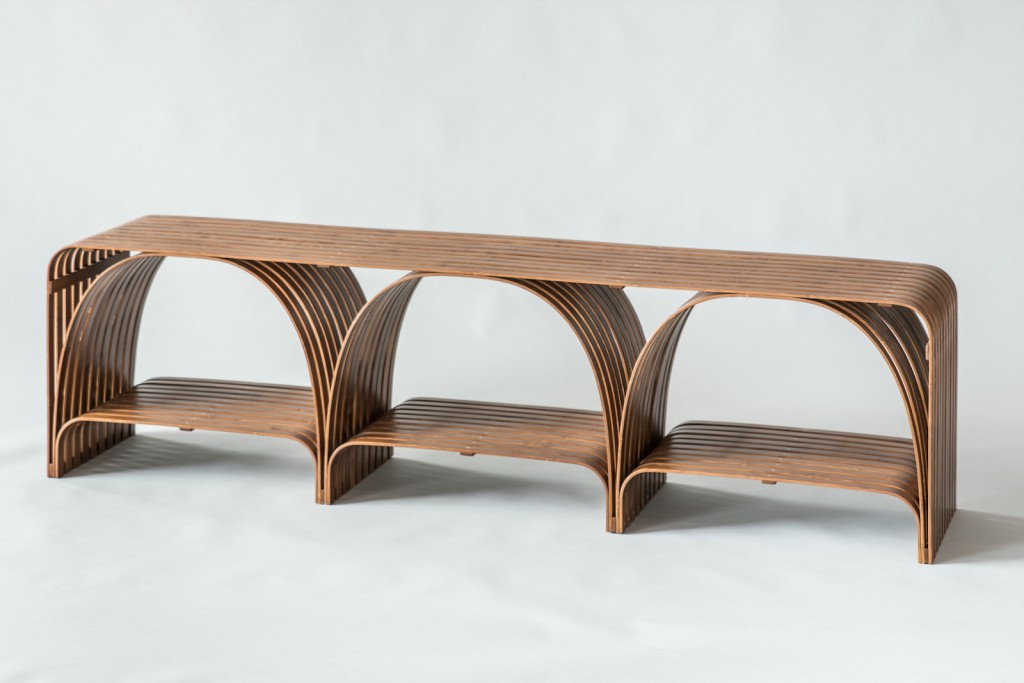 The Bridge Bamboo Bench is the largest piece of bamboo-bending furniture that the craftsman ever challenged himself with. 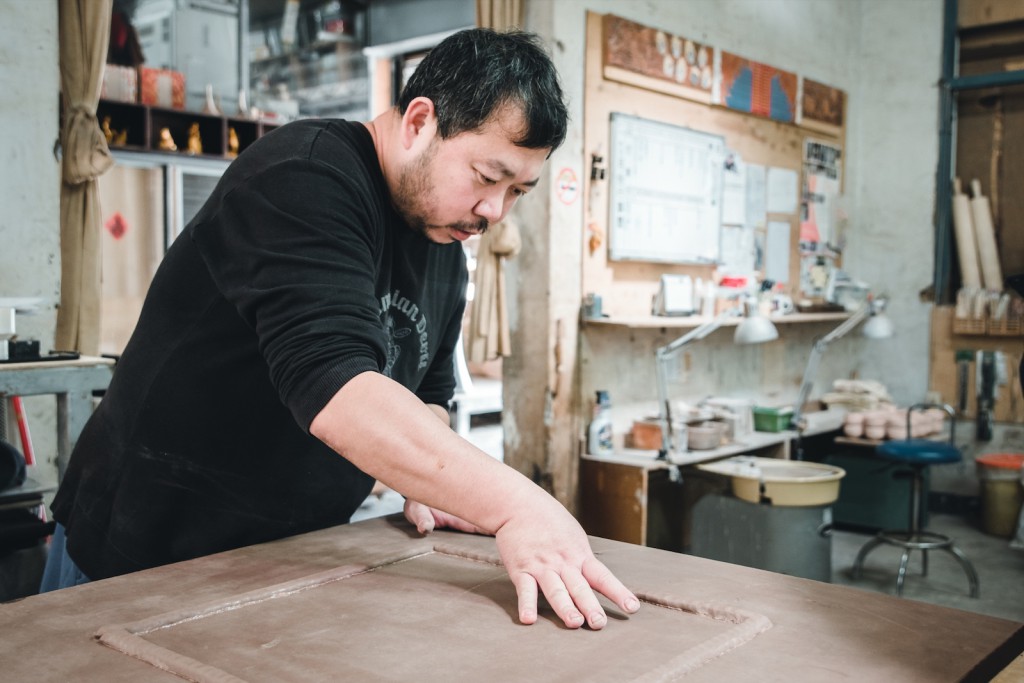 Park found a very unique quality to start experimenting with large-scale pottery, which has good qualities in glazing and finishing. 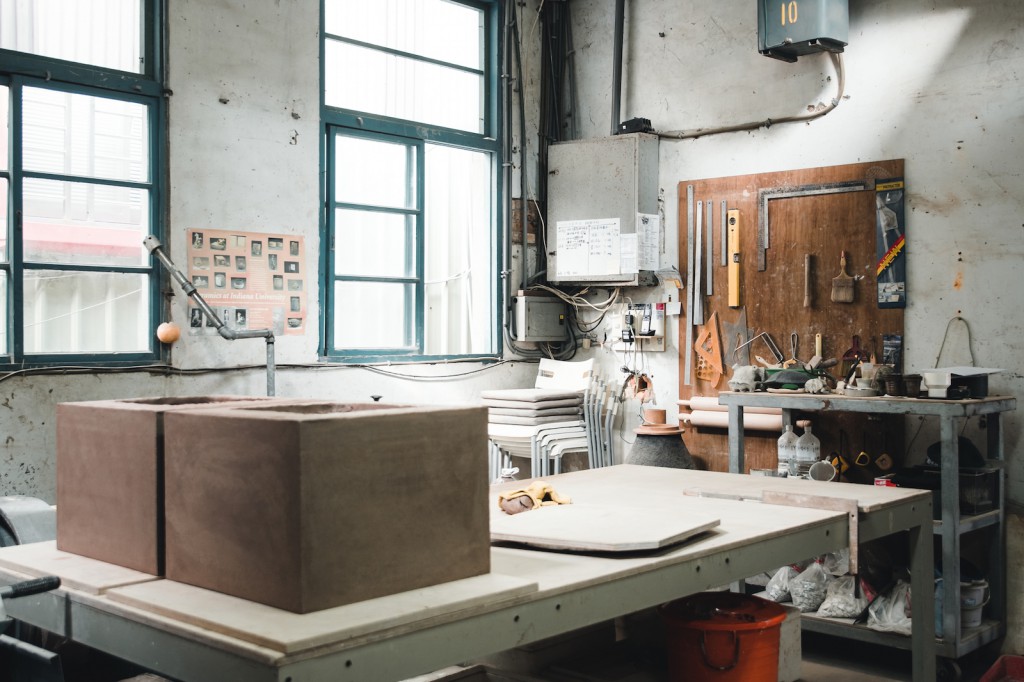 The Clay Table can be used both indoors and outdoors. BCXSY have found their inspiration while exploring the vast collection of the National Palace Museum and being drawn to the numerous artefacts shaped as natural elements. from rocks to plants and animals. The somehow surreal characteristics of those objects was also found back in the colourful displays of seasonal fruits, often observed in juice shops. Working with the craftsman, Jian-Fu Zhong, has allowed them to explore the ceramic craft further and to achieve The Fruit Tower and its variations by finding out --thanks to the moulding process beforehand--  the right balance between the shape of the fruit as they become more and more abstract and beautified with jade-like colours while being glazed. "All of those Fruit Towers will become functional objects, like candle holders," said the duo, referring to iconic vegetal shapes in homage to Taiwan’s culinary symbols, traditions and contemporary life.
‹ Back A New Layer Taiwan in Basel