The Wrong Negroni in the Right Place for 50 (+1) Years

As Bar Basso celebrates its 51st anniversary, TLmag talks to its owner Maurizio Stocchetto about a place that so many designers hold close to their hearts

Sitting humbly on a street corner in a residential area of Milan, Bar Basso attracts designers, architects, journalists and creatives from across the world. Its magnetic pull could be attributed to the renowned cocktails menu with the iconic Negroni Sbagliato or the monochrome pink interior that has a touch of Wes Anderson quirkiness. However, another factor that keeps the design world returning year after year is the character of Maurizio Stocchetto who, despite being the owner of Bar Basso, dons his uniform each evening to work behind the bar, pouring drinks alongside his other staff members. Despite all the responsibilities that come with running the business, Stocchetto tells TLmag that he still feels “the most fun thing is just to be behind the counter. It’s the best part of the work. From behind the counter, I have the power to talk to everybody.”

Although Maurizio has no background in design, during the 90s he befriended Marc Newson, Jasper Morrison, Thomas Sandell, Ross Lovegrove, and James Irvine amongst other designers. Although, he does recall dabbling in design as a child when he lived in Cortina – a stylish ski resort in the Italian Dolomites. His father, Mirko Stocchetto, worked in the cocktail bar of the famous Hotel Posta and, while his father was at work,  young Maurizio was trying his hand at creating bobsled courses. “We had to design all the bends just to make sure that the sled would stay in the tracks and then at five in the afternoon we would put some water on to turn it to ice. We were like little engineers” he recalls, smiling.

However, his afternoons of making bobsled tracks came to an end when his family moved away from the mountains and his father took over a little bar from Mr Giuseppe Basso and brought cocktails to the Milanese.

Tomorrow marks precisely 51 years since Bar Basso first opened its doors on the 13th of October, 1967.  During this time, Stocchetto has watched not only the city  of Milan develop but also the shifts that have taken place at a cultural and societal level. “When my father opened here it was 1967, things were still related to the world of the 50s and early 60s. But then in 1968 counterculture came along. There was revolution in the air, riots in the street and women’s liberation. Lots of things changed.”

Maurizio Stocchetto cites this as one of the influences behind his father’s invention of the iconic Negroni Sbagliato – which translates to the Wrong Negroni – in the early 70s, a drink which is now served in bars worldwide. In his recipe, gin is replaced by prosecco and mixed with Vermouth Rosso and Bitter Campari. Stocchetto says, “In the 50s and 60s, women did not go to the bar and have a drink on their own because the bar scene was kind of a chauvinistic. But after women’s liberation, they started to work and have independence, so they also started going to bars. Lots of ladies were drinking cocktails, therefore they had to be smoother. So my father had to please a new clientele.” Despite its enduring popularity, Maurizio admits, his father never enojoyed his famous cocktail: “he used to love negroni but he never liked Sbalgiato. For a heavy smoker, he always took a dim view of it.”

The bar has played a central part in Maurizio’s life since he was seven years old when they moved to Milan to open Bar Basso. “I have very fond memories from that time.” In 1976, when he was in high school, he started working at the bar during the summer. Then, in ‘78, he began taking on more hours whilst at university. In 1984, after two years in California, Maurizio has been working there on a daily basis, “It’s been a while” he says modestly.

In April 1999, Maurizio and his friends in the design world decided to host a party at Bar Basso during Milan’s Salone di Mobile, inviting roughly a hundred people. However, the news of the party spread and more than a thousand people showed up, and the party spilled from the bar out into the street in a tradition that has continued ever since. The bar now hosts as many as 5000 people every evening. “It’s really amazing how many people we have here. It was not planned to be, it just happened.” says Stocchetto, “It’s a very interesting crowd. They are all architects, designers, manufacturers, journalists.” He laughingly recounts a time when the police had to intervene because there were so many people: “They said “what? Nobody speaks Italian!?” So they left.” Though design week is a busy time, Stocchetto says he prefers the smaller parties where people can really interact with everyone else there.

Another shift Maurizio has observed over this time is the changing taste in cocktails. The bar used to serve over 500 cocktails. “There was a much wider shade of tastes. Part of it was also that, until 20 or 30 years ago, the liquor business was made by thousands of companies, some of them were big, some of them were small but they were all independent.” However with an increasing monopolization of the market, that is now owned by five major companies, came advertising campaigns that influence people’s tastes. “They started to manipulate marketing choices – which products were advertised which were not advertised. This affected cocktails because each one is made from certain liquors.” Now, people tend to follow trends, first, it was whiskey and then rum, then tequila and now we are in a gin craze. “It’s not as spontaneous as it used to be”, Stocchetto reflects somewhat nostalgically.

Also looking back to the past is the bar’s interior design which has defiantly remain unchanged since 1967. However this year, in celebration of Bar Basso’s birthday, the Canadian design firm Gabriel Scott created a bespoke lighting installation from white alabaster glass components that are assembled with a fine copper wire cable. Despite being a new addition, the Welles Glass Long Chandelier seamlessly sits with the decades-old furniture as if it is with lifelong friends. To see it, one must visit the bar itself as Maurizio intentionally keeps the bar’s website elusive and says he cannot relate to Facebook and Instagram. “If you say everything online then you lose all the mystery. It’s not interesting anymore.” 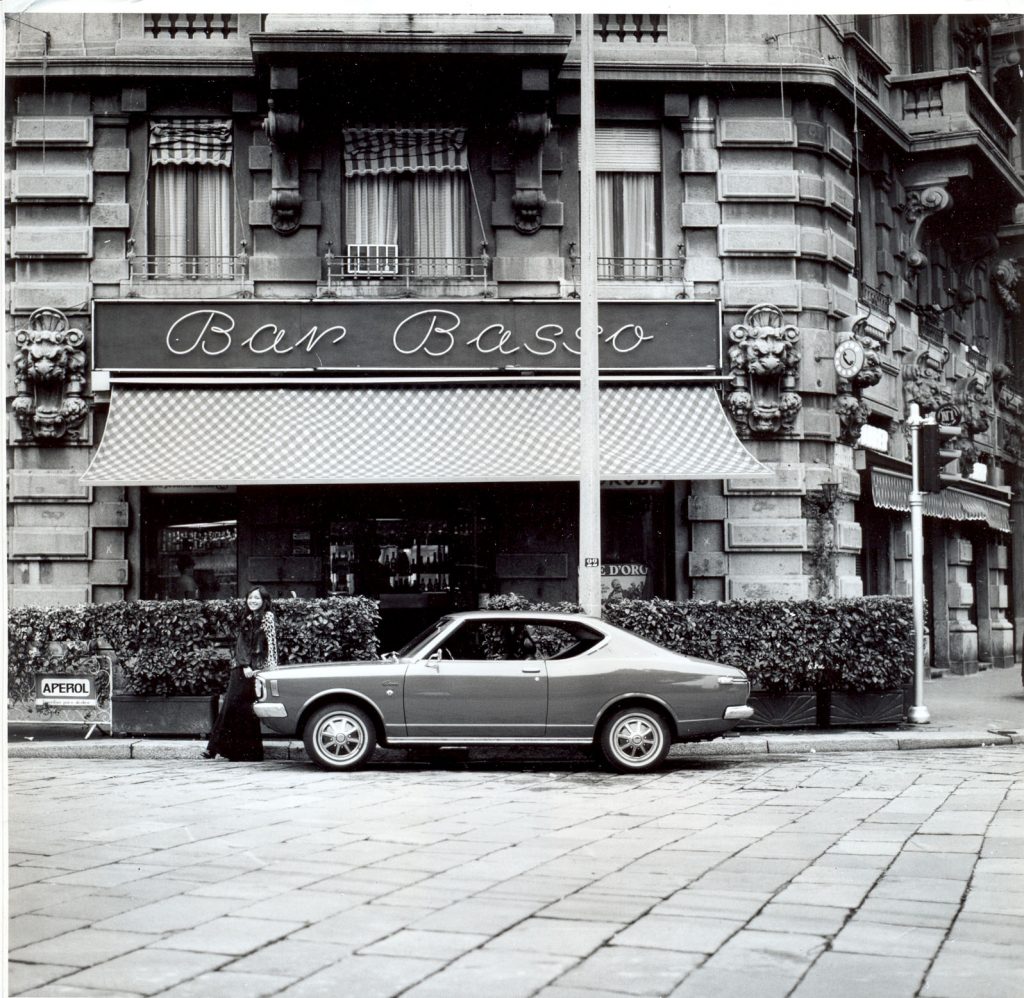 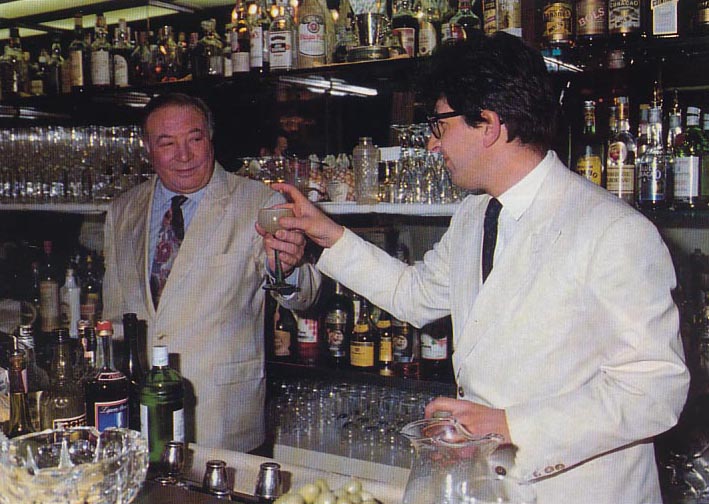 Father and son, Miko and Maurizio Stocchetto, working behind the bar 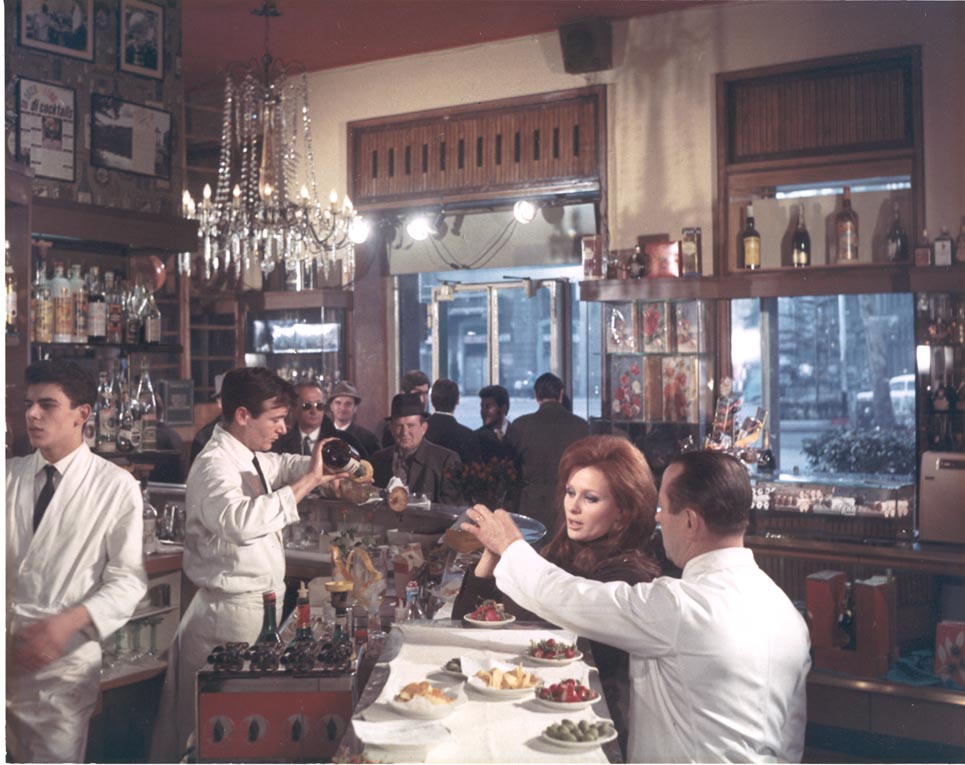 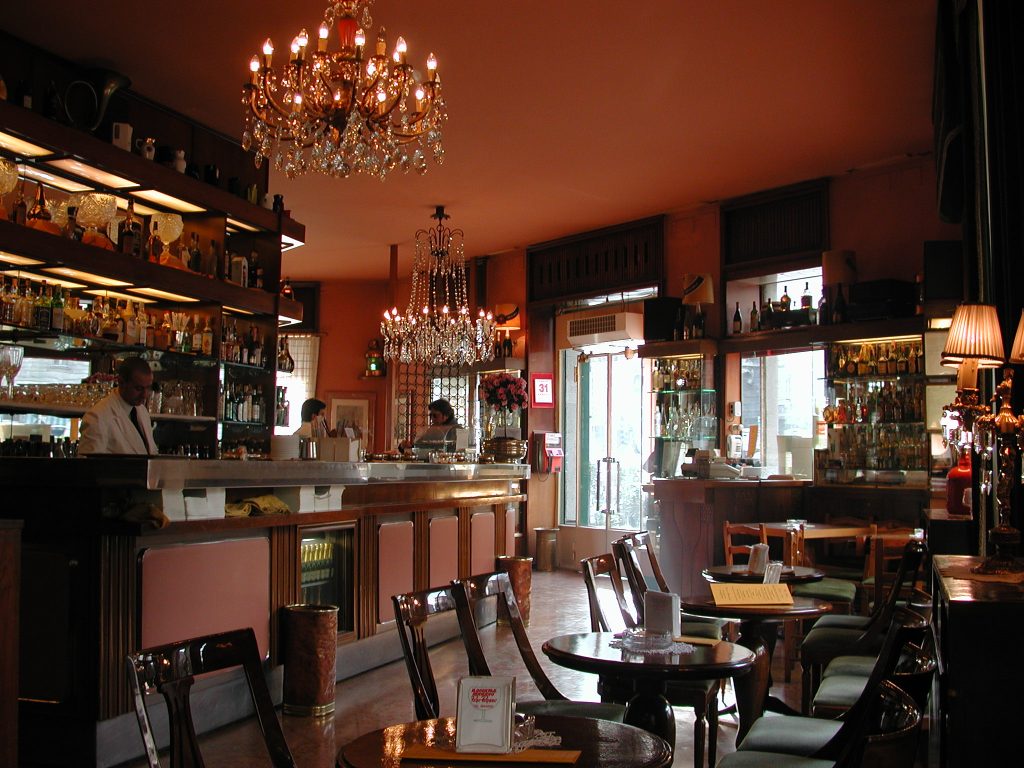 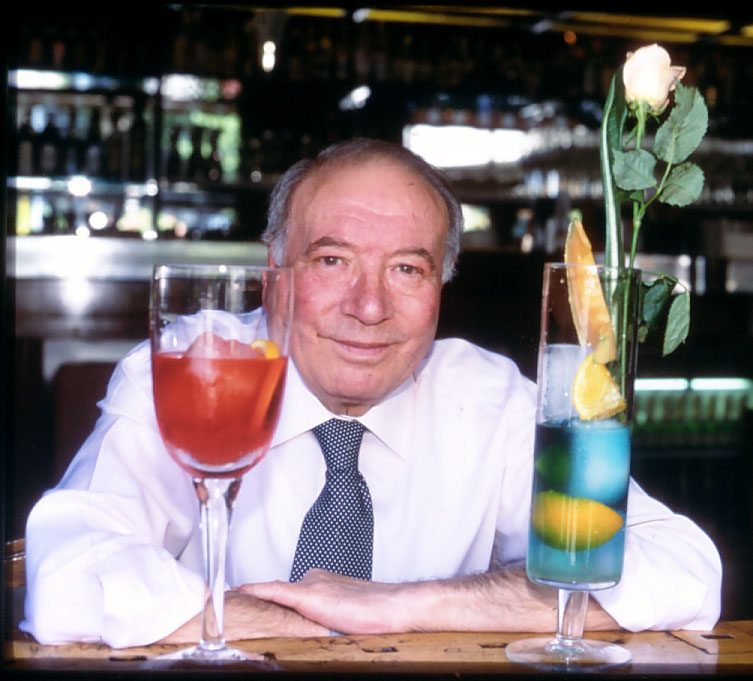 Mirko Stocchetto with the famous Negroni Sbagliato on the left, 2001 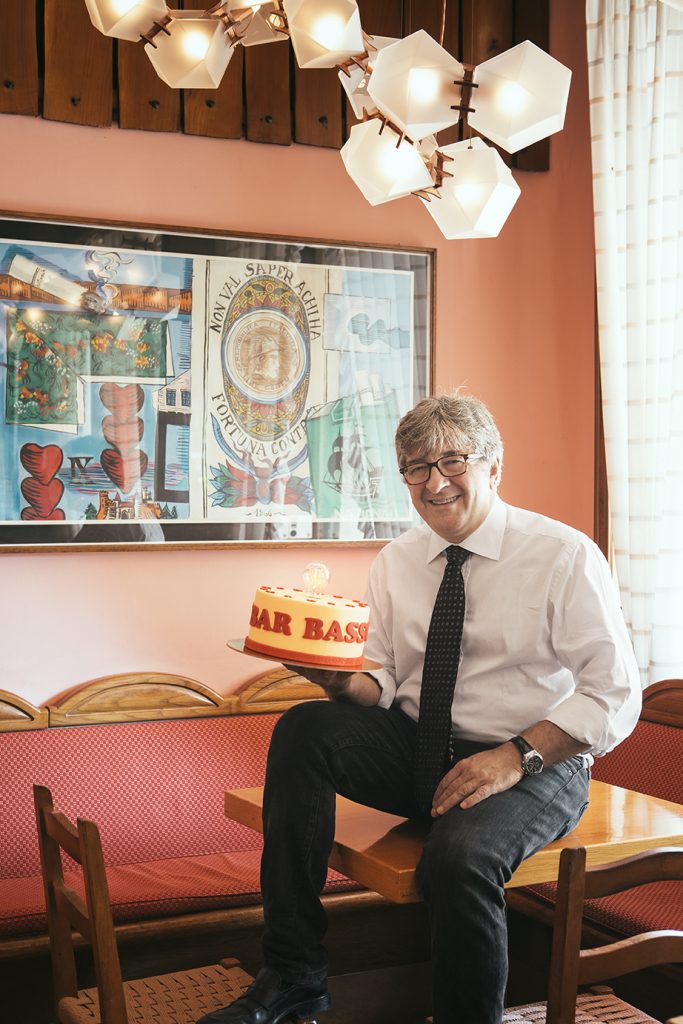 Maurizio Stochetto in Bar Basso celebrating 51 years with a section of the Welles Glass Long Chandelier visible above, 2018
‹ Back