America Today
Living with Art & Design
Founded in 1930 by Ted Shawn, Jacob’s Pillow counts amongst a handful of centres in the United States that are solely dedicated to developing dance in its many forms. As the only such venue to hold a National Medal of the Arts and National Historic Landmark status, the school has played host to many...
Scroll right to read more ›
Text by Adrian Madlener

Founded in 1930 by Ted Shawn, Jacob’s Pillow counts amongst a handful of centres in the United States that are solely dedicated to developing dance in its many forms. As the only such venue to hold a National Medal of the Arts and National Historic Landmark status, the school has played host to many Twentieth and Twenty-First century greats: Alvin Ailey, Mikhail Baryshnikov, Pina Bausch, Trisha Brown, Merce Cunningham and Twyla Tharp, just to name a few. Each summer, the campus welcomes a prominent company and a group of young residents looking to hone different skill sets. The annual Jacob’s Pillow Dance Festival – the longest running of its kind in the United States – presents over 300 events, talks, exhibitions and performances. Unassumingly perched in the eastern reaches of Massachusetts’ picturesque Berkshires; far from the constraints and pressures of the big city – the secluded centre has long served as a bastion of cross-fertilization. However, Jacob’s Pillow can only operate in the summer due to its uninsulated buildings and outdoor platforms.

Marking the closing of its 85th season last month, the dance school inaugurated the new Perles Family Studio. The site-specific and landscape-embedded structure can operate throughout the year. Designed by award winning Boston firm Flansburgh Architects, the multipurpose building echoes many of the historic barn structures allready on site but provides a new program of amenities specific to various types of dance and for different events. The layout, use of material and conceptual value reveals additional merits. Adopting an ethnographic approach, the design team began working by immersing themselves at Jacob’s Pillow last summer. The experience allowed them to better understand the needs of visiting performers, administrators and staff alike.

The Perles Family Studio was designed with the goal of keeping structural elements exposed; including the bolts that hold roof-bearing trusses in place. Thick Cedar-, Fur- and Pine-wood cladding is used sparingly, allowing for an almost transparent facade to exude light. The building allows passersby to look through to foliage on the opposite side. Carefully engineered Maple wood flooring seamlessly extends into the outdoor surroundings. Built into a slope, the structure explicitly reveals slanted lines and maximises it’s footprint as usable space. Inside, technological features and clever solutions are modestly integrated, providing Jacob’s Pillow with the ability to employ the 2247 square-metres space for a wide range of functions. An automatic shade system can transform the building into a black box theatre while orchestra seating can appear out of the wall. The weather proof building will allow Jacob’s Pillow to develop a year-round program and a closer connection with the local community. The Perles Family Studio ties the campus together. Its bright exterior will weather over time and blend perfectly into the context without overshadowing other buildings. 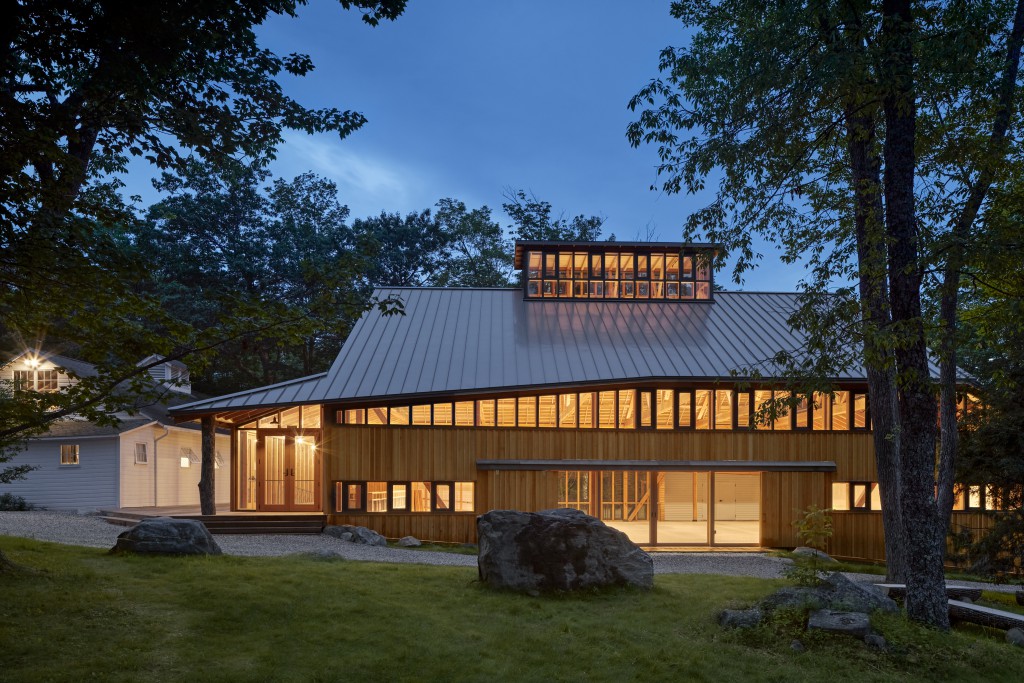 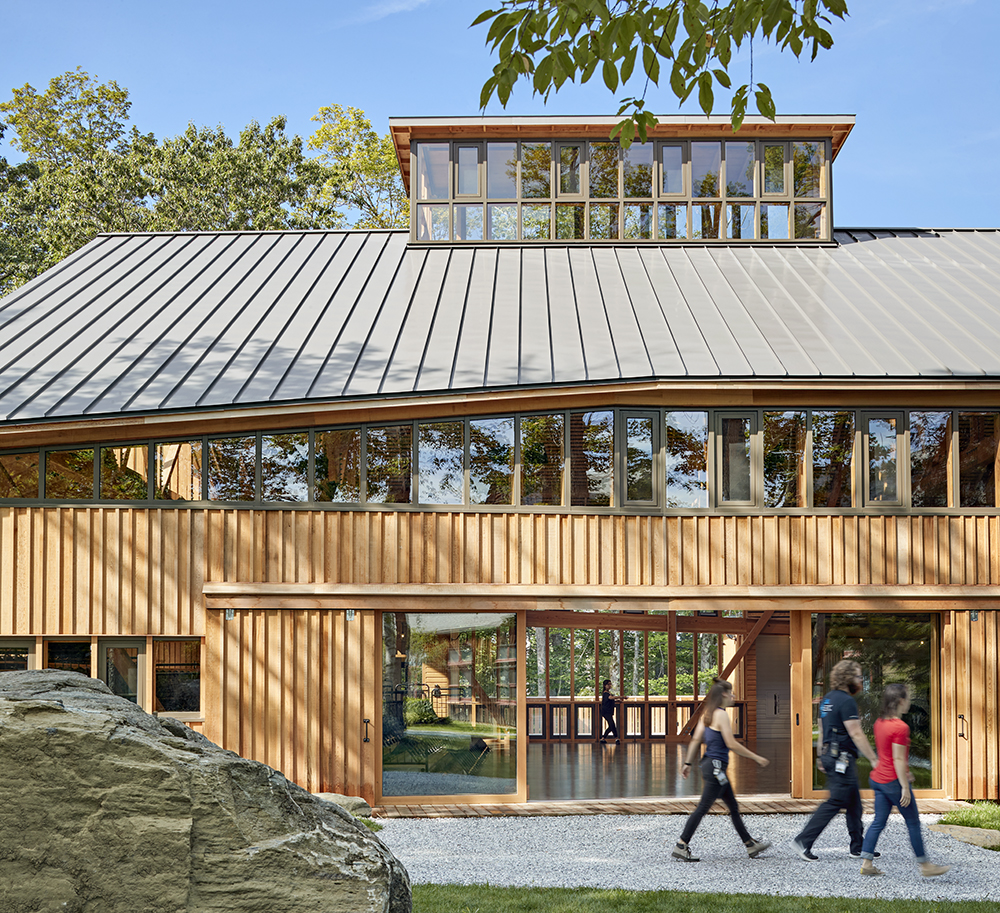 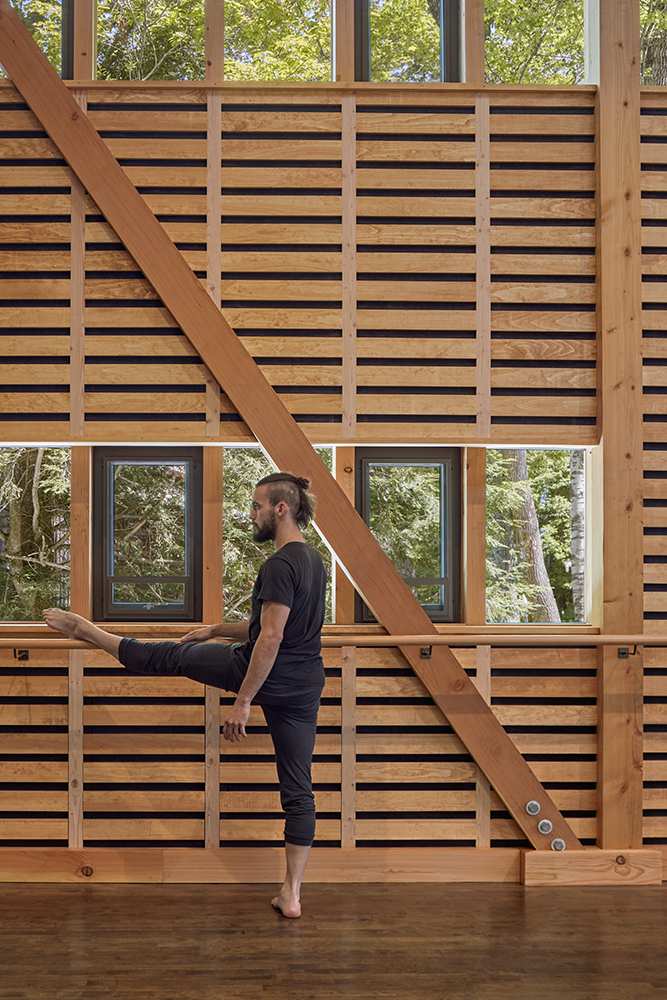 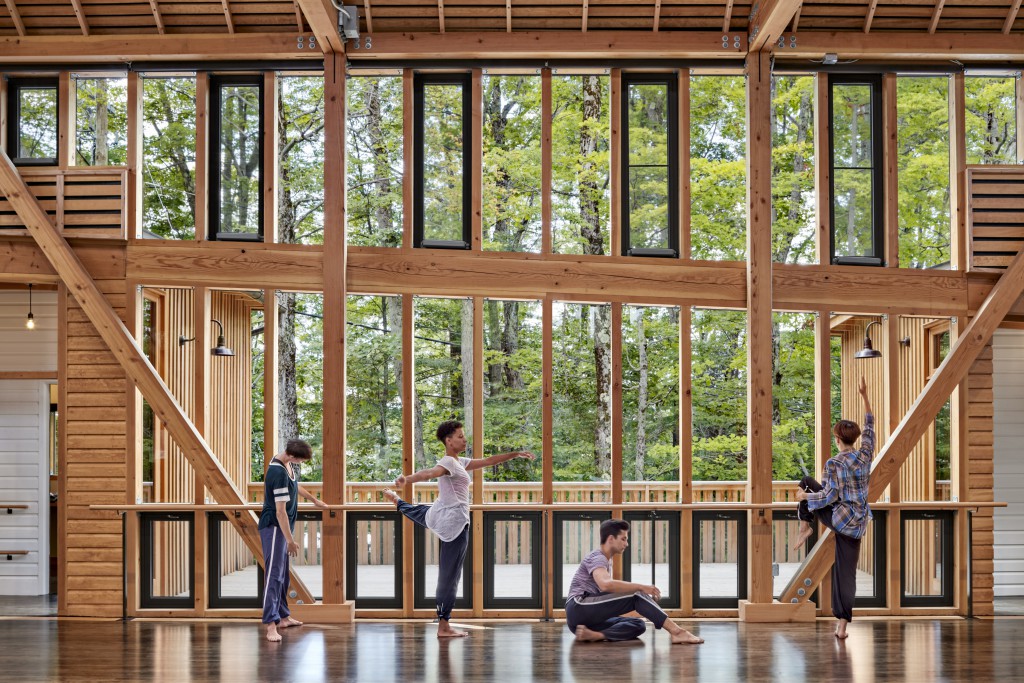 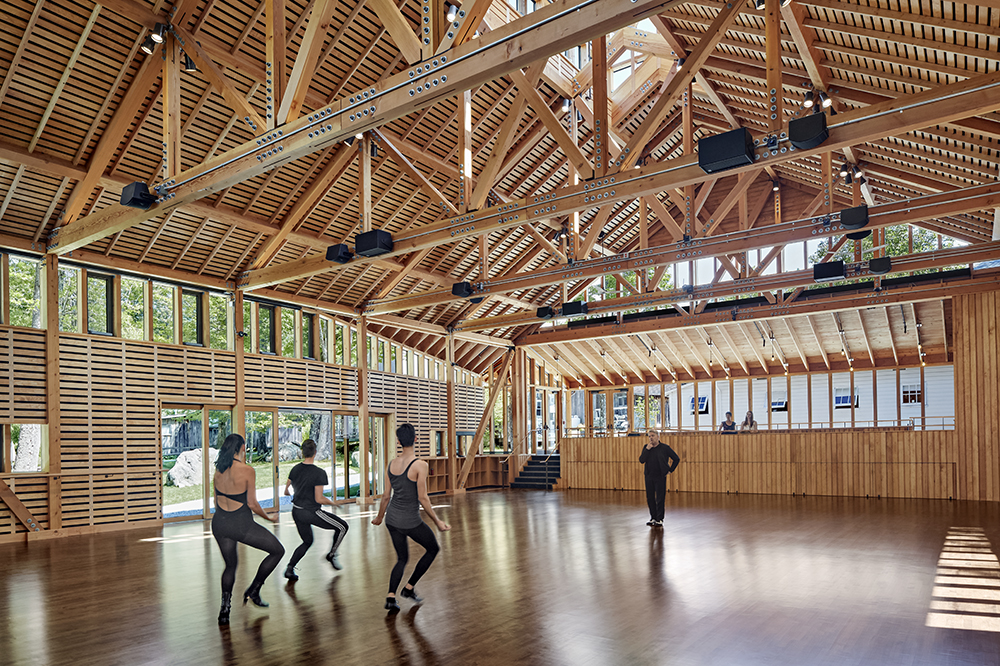 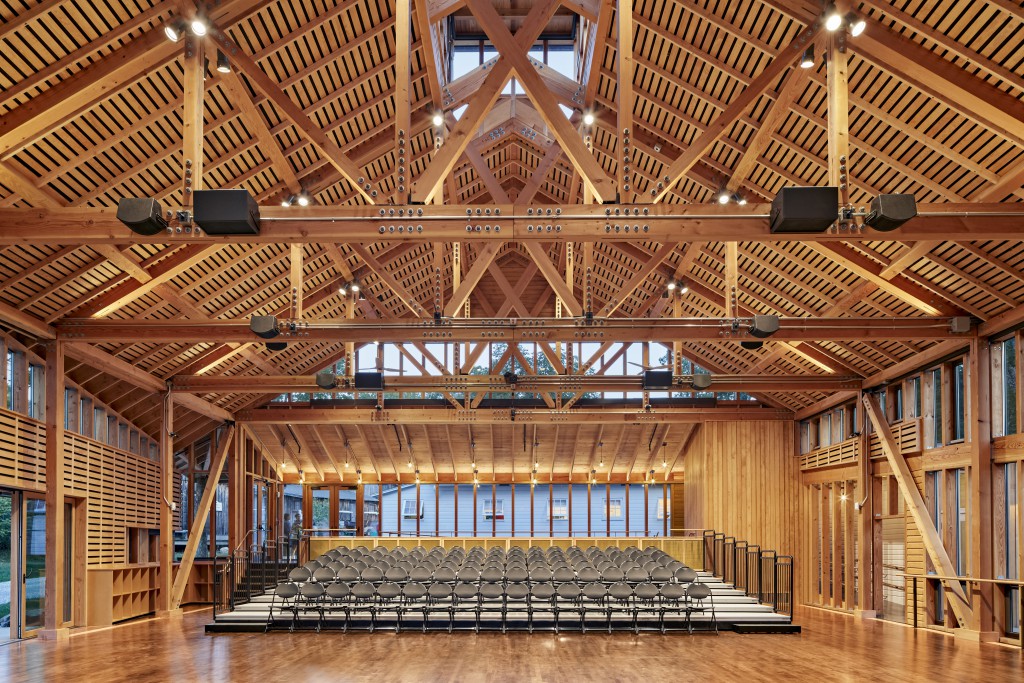 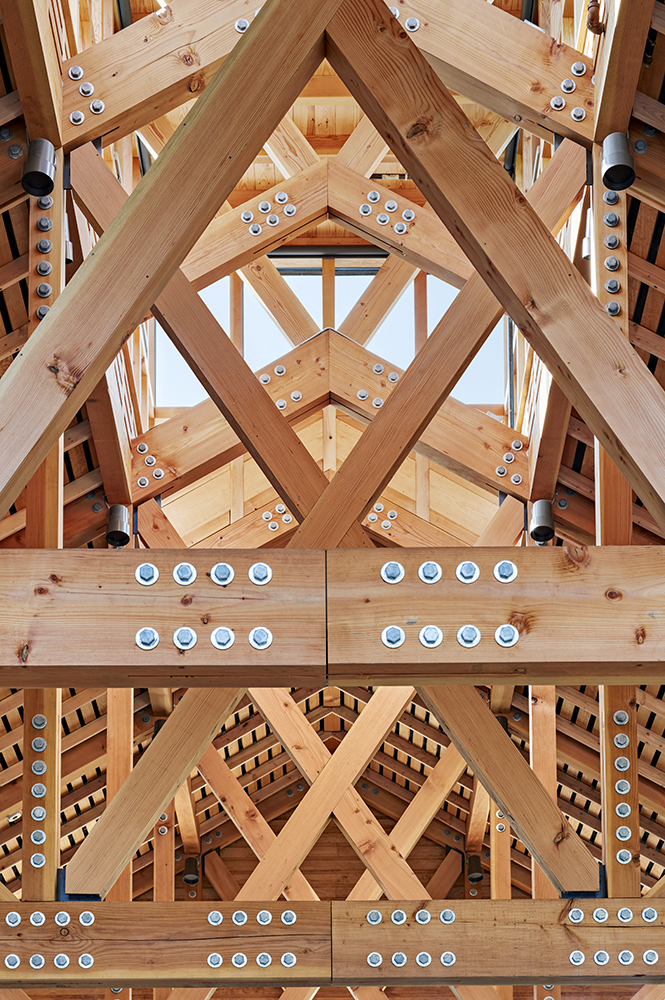 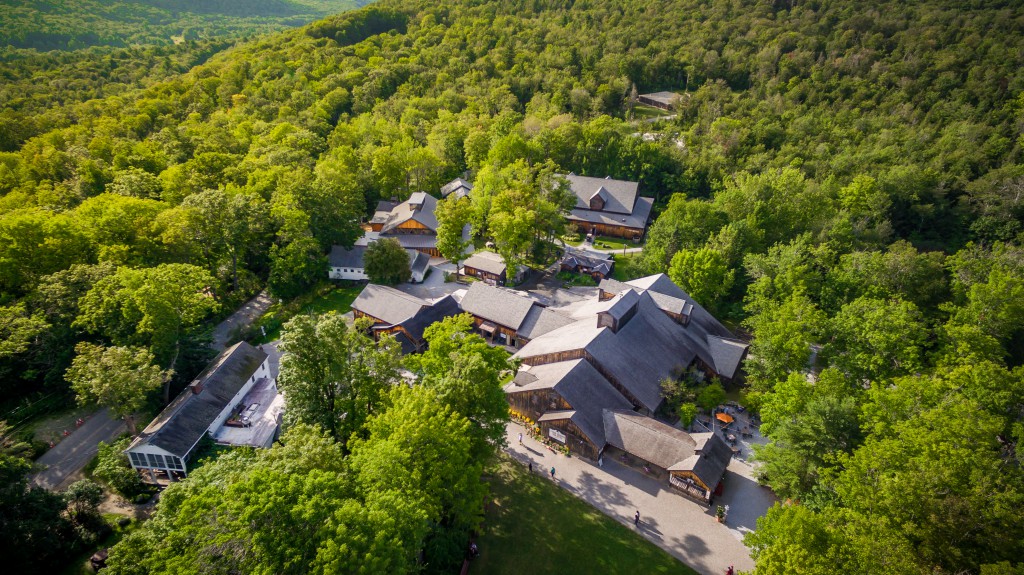