Paris entered the history of applied arts in the 1860s. First, French taste vied with English taste, and then it quickly took the lead. Today, the French applied arts organisation, Les Arts décoratifs, keeps its finger on the pulse of the expectations of both the public and of young industry professionals ranging from designers to craftspeople and interior designers. Education and knowledge transmission are among the organisation’s primary challenges. Additionally, Les Arts décoratifs champions the notion of French taste. TLmag recently had a lively discussion with managing director David Caméo and museums director Olivier Gabet at the organisation’s offices facing Paris’ famous Jardin des Tuileries.

TLmag: How would you describe today’s Musée des arts décoratifs?
David Caméo: Les Arts décoratifs is a rich, complex institution that encompasses both museums and art schools. The museums are the Musée des arts décoratifs on the rue de Rivoli and the Musée Nissim de Camondo on the rue Monceau in Paris. The schools are the Ateliers du Carrousel, which offers amateur art classes to 1,600 children and adults, and the Ecole Camondo, an undergraduate and graduate art school specialised in interior design and design with a student body of 330.

This combination of museums and educational institutions is made possible by our unique structure. Les Arts décoratifs was not founded by the government. It was founded by a private sector partnership that brought together banks, manufacturing companies, art lovers and collectors. The original mission was to provide an international showcase for the modern approach and art of French living and to share French knowledge and methods. The organisation was also tasked with inspiring and motivating industry professionals and training their eye. That is how the Ecole Camondo came about. Director René-Jacques Mayer and I spent several years working together at the Cité de la Céramique in Sèvres. From its founding, the Ecole Camondo has sought to promote French excellence in the applied arts and interior decoration. To this day, we strive to transmit this heritage while simultaneously keeping pace with contemporary creation in our specialty fields: crafts, fashion, design and the graphic arts.

TLmag: Let’s go back in time and paint the scene of the origins of the Musée des Arts décoratifs. There were the world fairs, first in London in 1851 and 1862, then Paris in 1855, 1867, 1889, 1900 and 1925, Vienna in 1873, Brussels in 1910, Turin in 1911 and Ghent in 1913. How would you situate the Musée des Arts décoratifs vis-à-vis the other decorative arts museums that sprung up in Europe starting in the mid-19th century?
Olivier Gabet: The date when the Musée des arts décoratifs was created is up for debate. For me, the museum’s founding dates back to 1864 when our association was created. That said, people often cite the opening of the museum’s rue de Rivoli location in 1905. Our organisation came into existence on a wave of European enthusiasm and emulation around the idea of the industrial arts. In 1851, Great Britain made a lasting impression when it led the way in creating industrial objects and in linking art and industry. France immediately got on board. Léon de Laborde’s report on London’s Great Exhibition rallied designers, industrialists and manufacturers around the promotion of French creativity, craftsmanship and excellence in product design. The idea of a decorative arts museum was born of this movement and was backed by it. In 1865, the museum began presenting innovative projects and creations at temporary exhibitions that focussed on specific topics and techniques. From that point forward, the museum served to update tastes and styles. It spread the influence of applied arts from the Near and Far East and imagined new sources of inspiration and new chromatic and ornamental possibilities for textiles and ceramics. The Musée des arts décoratifs drew its inspiration from the V&A in London, the MAK in Vienna and the Brussels Cinquantenaire Museum.

TLmag: What do you see as Brussels’ role in the birth of the arts industries, as compared with that of Paris? Here I’m thinking of the 1997 Musée d’Orsay Paris-Brussels/Brussels-Paris retrospective that highlighted major artistic movements from the end of the 19th century and the turn of the 20th century.
O.G.: I believe the Brussels arts scene was a true artistic laboratory during that period. It was also an outlet for French artists as Brussels offered more freedom. Henry Van de Velde proved this to be the case in his thinking and in his work. He was a wonderful, emblematic figure who cultivated a new approach to production. Like William Morris, Van de Velde saw the home as the birthplace of the New Man. The artistic freedom expressed by Van de Velde and many other artists in the Libre Esthétique movement and at the Weimar school, which led to the creation of Bauhaus, served as a source of both utopian ideals and progress. I am amazed that this vibrant, prolific heritage isn’t always evident at Brussels’ museums and cultural institutions. Brussels is an eclectic, hybrid city whose place in the history of decorative arts is every bit as legitimate as those of Paris, London or Vienna.

TLmag: Let’s talk now about the decorative arts crafts and practices that have come together around what could be termed French taste. How do you view this trend, which continues to grow, despite the increasingly globalised market?
D.C.: There are institutions that are active contributors to this French artistic identity. Among them are the Comité Colbert, the Bettencourt Schueller Foundation with its Prize for the Intelligence of the Hand and the Mobilier national, to name just a few. They strive to protect, preserve and transmit France’s savoir-faire and its arts and crafts traditions. This identity is an integral part of French decorative arts. The big French luxury brands that export their goods internationally often make reference to it. This French artistic identity is also evident in the way that these brands value their history and their heritage. Our role at Les Arts décoratifs is to support this identity through our collections, exhibitions, publications and schools. Our publications recount its history and our schools transmit France’s heritage and savoir-faire. Our mission is to offer both museum services and educational services.

O.G.: The Musée des arts décoratifs has a unique role to play. The concept of decorative arts is often seen as being very French. The museum came about thanks to many generations of artisans and arts industries, the forbearers of the current-day luxury brands. This has become a defining characteristic of the French national identity. Take, for instance, the influence that French taste has had on Europe and the rest of the world since the 19th century, the prominence of French architects and decorators or the admiration for the entire generation of designers and graphic designers that is coming up right now. At both public auctions and on the secondary market, Paris has become the capital of decorative arts and design, not to mention fashion.

TLmag: How were the Musée des Arts décoratifs’ collections formed?
D.C.: Les Arts décoratifs holds non-profit status under the French law of 1901. We have an annual budget of €31 million, €15 million of which is provided by the French government, as we are responsible for the national collections. The remaining funds come from our own sources, including museum ticket sales, school tuition fees, concessions and facility rental income. We also put a lot of effort into our partnerships and sponsorships, which total €5 million, an incredible achievement for an organisation of this kind. Per the terms of our agreement, none of our government funding may be used for acquisitions or temporary exhibitions. That means that the Les Arts décoratifs team has to constantly devise new ways to come up with the necessary funds. Thanks to certain tax advantages as well as the combined efforts of our Partners’ Club, the Friends of Les Arts décoratifs, our generous Friends in the U.S. and the new Cercle Design 20/21, we have been able to purchase important pieces and expand the collections that we have built up over time.

O.G.: The Musée des Arts décoratifs is seen as instructive and innovative, despite the obvious lack of funds. It is recognised for its well-chosen acquisitions. The donations we are fortunate enough to receive are given pride of place. They are exhibited and featured in our publications. Sometimes we organise exhibitions just for them. Collectors, designers and their families know this. They also appreciate the quality of their on-going relationships with the curators and the museum itself. That is how we came to receive the Roger Tallon archives in 2008, which were further enriched by Tallon’s family. Thanks to this donation, we were able to mount the vast retrospective currently on exhibit. Specialised art dealers like the Galerie Kreo, among many others, also make regular donations. The art dealer François Laffanour sits on our board. His perspective is precious to us because he has in-depth knowledge of collectors and of the changing interests in historic and contemporary design. Yet he doesn’t interfere with the museum’s management. We maintain a multidisciplinary approach that creates dialogue between crafts and graphic design and between design and fashion. The new exhibition style we are about to debut in our contemporary galleries speaks to the museum’s interest in fashion. This has won us the friendship of many fashion designers, including Pierre Hardy, who has offered us a number of his pieces over the last 15 years. This eclecticism is very representative of the museum.

TLmag: Tell us about the synergy between the Musée des arts décoratifs and the Ecole Camondo. Was this synergy a source of inspiration for the L’Esprit du Bauhaus exhibition that opened in October?
D.C.: My intention was to create stronger, more frequent connections between the museum and the school. The museum is an amazing laboratory for the Camondo students. We’ve had them complete projects that directly address the museum’s needs. For example, the 3rd year students have been tasked with redesigning the museum’s front hall. Olivier Gabet also teaches class there to give his students a different perspective on the museum. It’s a rare opportunity for them.

O.G.: The L’Esprit du Bauhaus exhibition focuses on the Bauhaus school and on the decorative utopias of the 19th and 20th centuries. The idea is to reiterate that Bauhaus was neither a style nor a movement. It was a school. Visitors explore workshops that cover different parts of the school curriculum. This exhibition seeks to educate and inform the public about Bauhaus. It ends with the contemporary collection curated by Mathieu Mercier. This collection details the inspiration for Bauhaus and the impact that Bauhaus has had on contemporary work, in particular the work of designers like Pierre Charpin and Muller Van Severen. If we look at the idea of Gesamtkunstwerk (a total work of art), which Tallon summarised as “Everything proceeds from art,” it is clear that museums could never exist without knowledge transmission and schools. Without the practice of art, we would have no masterpieces and no search for excellence. Finally, without artistic dialogue, neither taste nor style could exist. 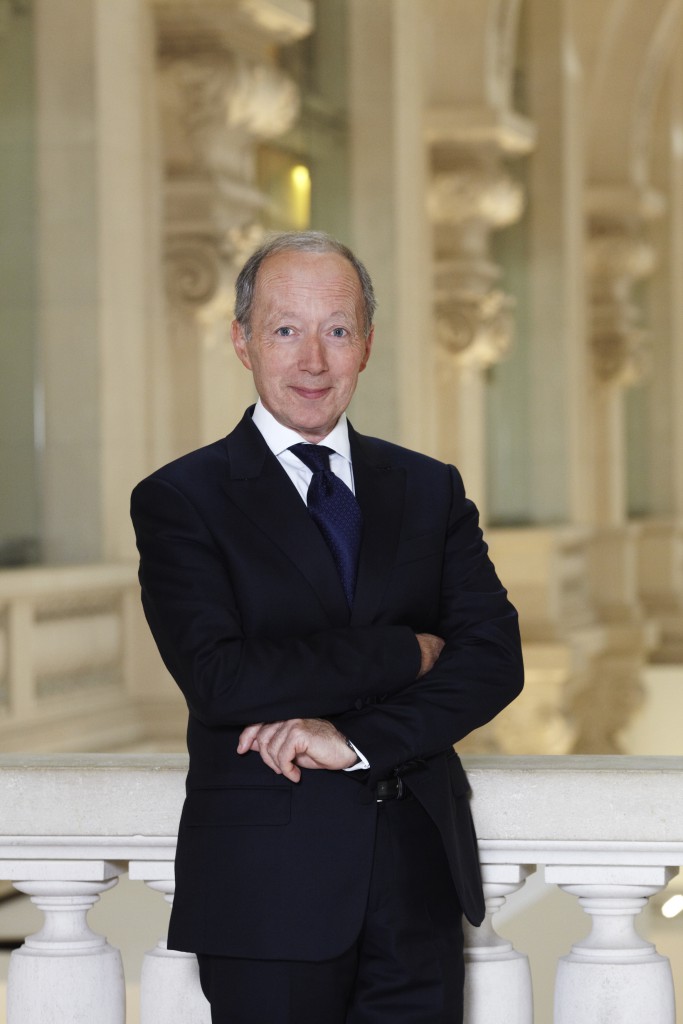 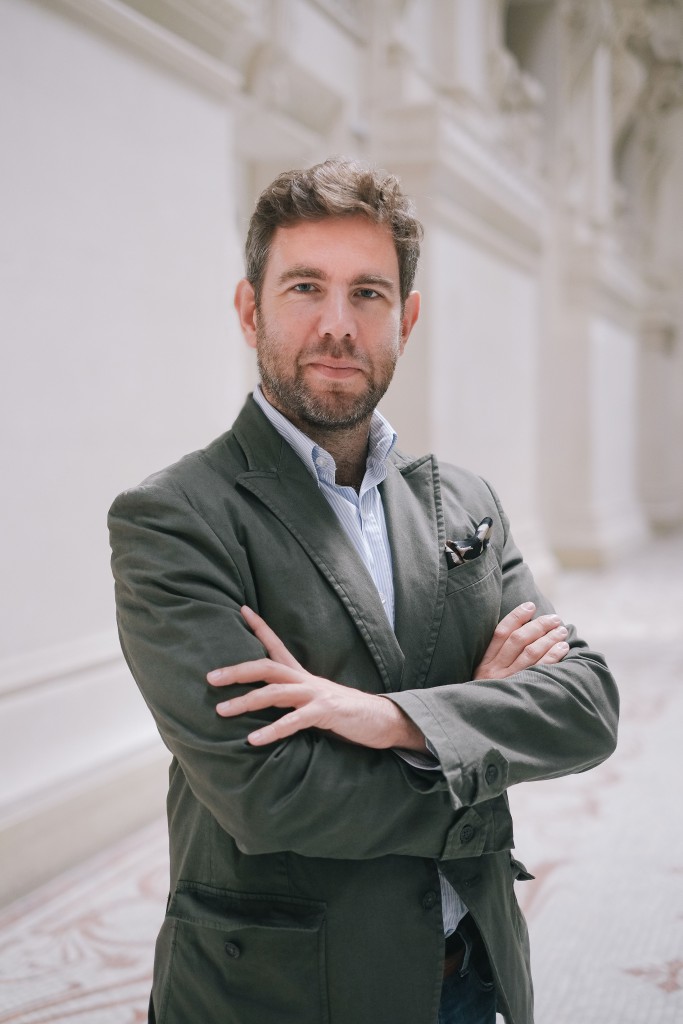 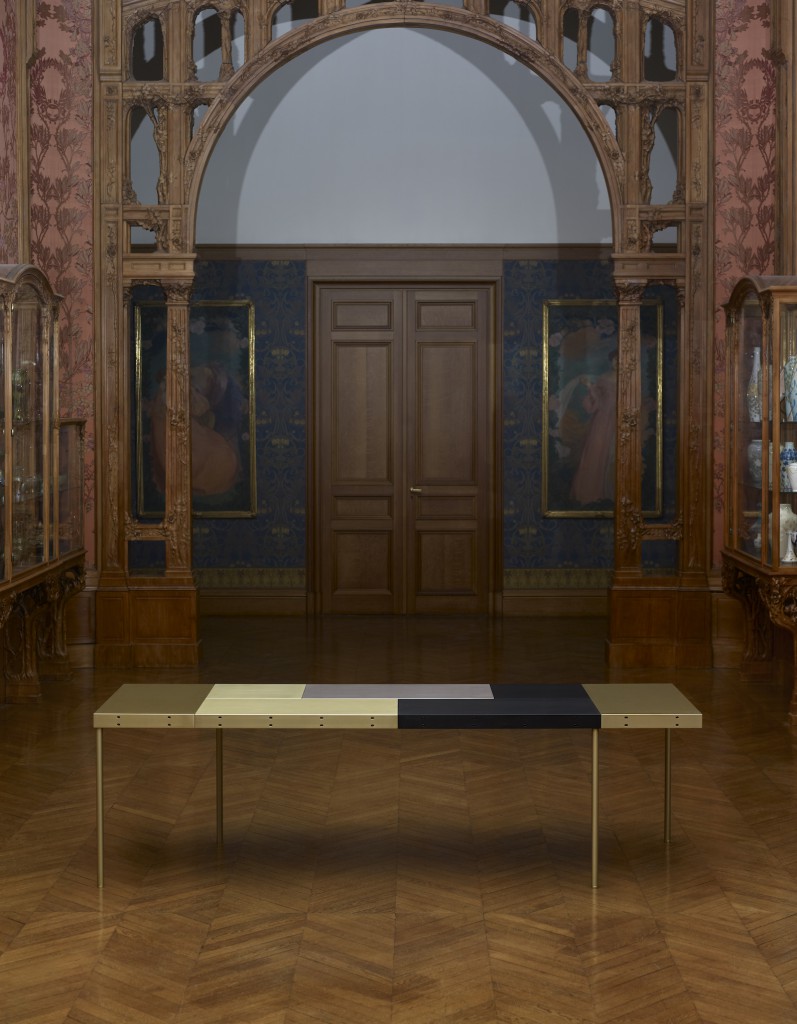 Martin Szekely, anodised aluminum, one of the recent acquisition done by the Cercle Design 20/21 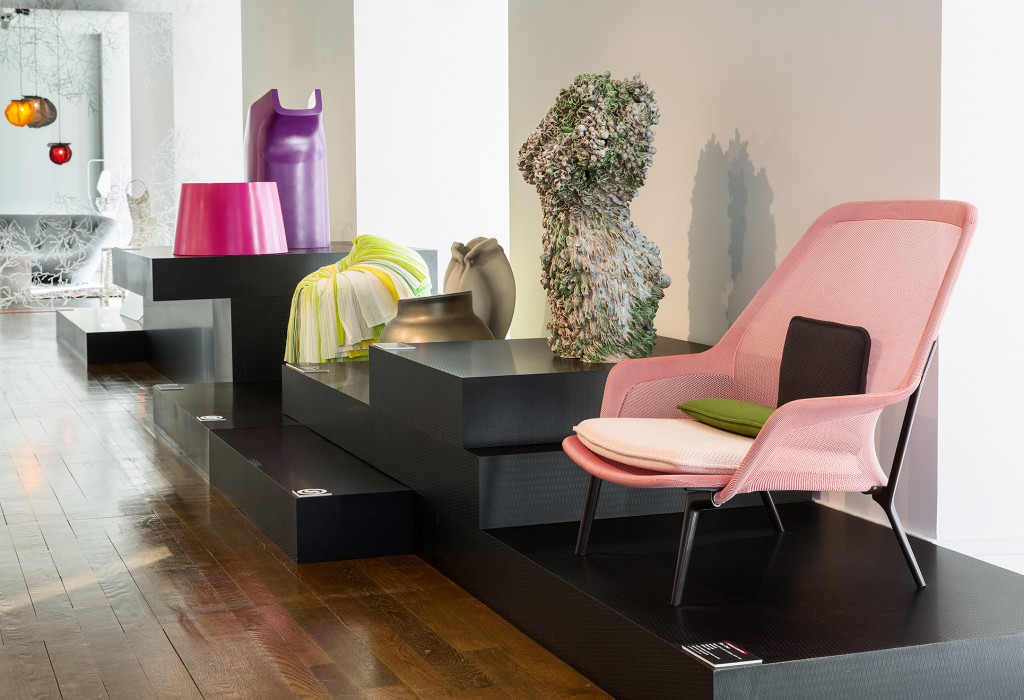 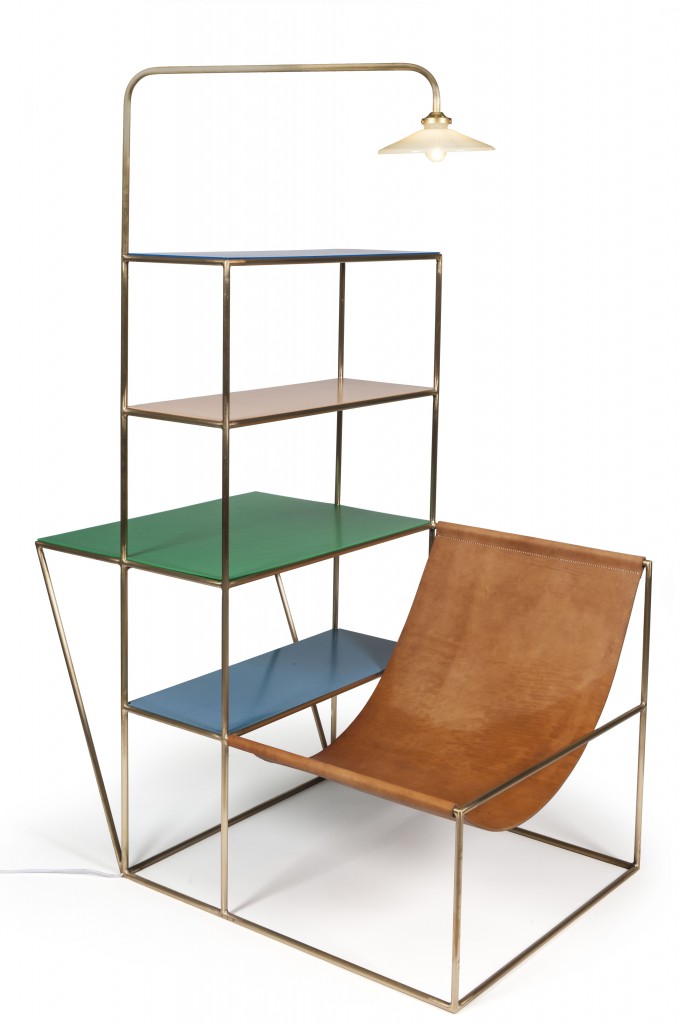 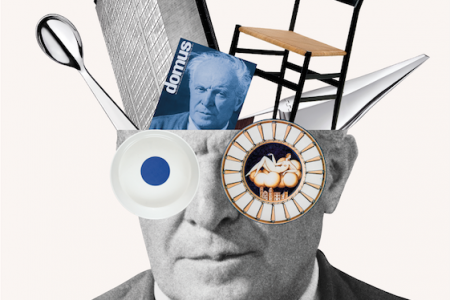 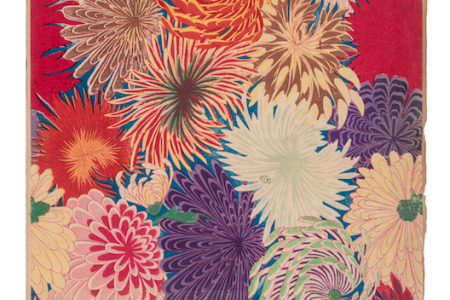 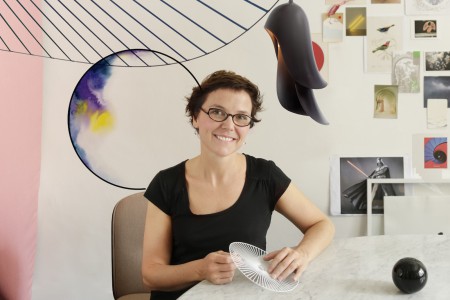 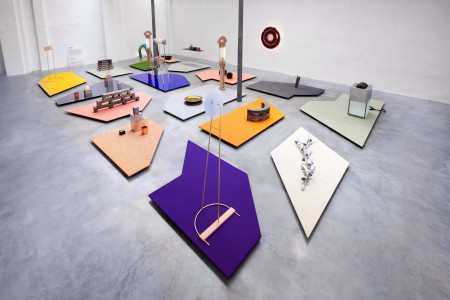