Martin Szekely will be exhibiting at MADD (Musée des Arts décoratifs et du Design) in Bordeaux, France from 26th April until 16th September 2018. This interview is the best way to reveal some of the hidden facets of this iconic French designer.

For Martin Szekely, “There’s nothing to hide.” The designer perfects his pieces from every angle. This approach reveals both the rigour of his method and the beauty of his creations, which manage to be balanced and delicate without ever falling prey to minimalism. Experimentation takes time and Szekely’s preferred form of craftsmanship is one that employs technology. As a designer, he uses this same precision and sense of proportion to create beautiful structures. Thanks to the training that Szekely received at the Ecole Estienne in Paris, he could have become a typographer or a bookbinder. Instead, he abandoned the graphic arts in favour of applied research in innovative materials and new kinds of objects and furniture. Szekely’s appreciation of a job well done and his close relationship with his collectors and craftsmen have motivated the designer to forge his own altruistic path.

TLmag: Five years after Draw No More, your Centre Pompidou exhibition mounted by Françoise Guichon, do you view your work differently?

Martin Szekely: Draw No More was the fruition of a thought process that grew out of a personal, historical context at the end of the 1990s. This thought process found expression in my 1996 Perrier glass. The exhibition evoked my growing understanding that every object has its own definition and its own function long before it is ever drawn. In contrast, you cannot draw the use of an object. Since this monographic exhibition, which ran from October 2011 to January 2012, my work has evolved with each new project. However, at the end of the day, all my creations essentially head in the same direction. The fact that I don’t force myself to search for a specific line or a signature for my work gives me the greatest amount of freedom to experiment. As you can imagine, it is more about a mindset than a style.

TLmag: Do you feel that thought, or culture and ethics more specifically, should take precedence over action and form?

M.S.: You can’t dissociate them. They couldn’t exist without each other. As a point of comparison, what would become of our physical bodies if we didn’t have our minds and vice versa? To answer your question, I believe it is important to think of these different aspects as a whole, although their order may be rearranged within that whole. Thought may lead to action or to form but the opposite is also possible.

TLmag: As an industrial designer, you have to be able to support the modern-day world in which we live. That is to say, you must be able to subtract rather than add and conserve resources while preserving aesthetics and functionality. Does this kind of mission speak to you?

M.S.: I don’t feel that I have been tasked with a mission. My work has never been dictated by any political, social or aesthetic ideology. This is true of both my personal research and my industrial collaborations. The ethics or motivation behind my work is the work itself. I don’t look for any kind of external ideological legitimacy. I prefer to let others, should they feel capable, imagine a better future. The future could be more economical, more aesthetically pleasing, more functional, more enjoyable even. Yet those ideas are debatable. Everything depends on the context and the situation.

TLmag: As a designer, what is your current approach to your search for furniture and uses that are simultaneously minimalist and maximalist?

M.S.: You could say that I am partial to furniture and objects. I have been experimenting with their structures and uses for a long time.

TLmag: Recently I had the chance to interview Gaetano Pesce at his studio in New York and then at a conference in Brussels where he spoke briefly about his little-known glasswork. You had the chance to fully explore Pesce’s glasswork invention, Mistral, which he devised between 1988 and 1992. This opportunity was made possible by Françoise Guichon, who has followed your work from your time at the International Glass and Visual Arts Research Centre (CIRVA), where she was the director at the time, to the Centre Pompidou, where she worked in the design department. Did you get to know Pesce well? In your opinion, to what degree is Mistral an innovative glasswork technique in the context of design or in general?

M.S.: Gaetano came up with a new way of working with glass. He manipulates it in molten form instead of using traditionally dictated methods such as blowing, applying pressure and moulding. He was kind enough to let me use the Mistral method on des Plats, the project I completed in 1999 and 2000 at the CIRVA in Marseille. Thanks to this method, you can achieve different results than you would with traditional methods.

TLmag: Did the des Plats project that you created at the CIRVA remind you of the importance of experience and experimentation? For instance, free blowing can take your work in an unpredictable direction and sometimes it gets subsumed by other potential forms and uses. Is it by physically doing or by observing people, their practices, knowledge and manual skills that you make new discoveries?

M.S.: New methods often beget new results. Yet those results could have been achieved through traditional methods or techniques as well. Ever since I was a child, I have been in contact with materials and different ways of transforming them. At the end of the 1950s, we lived in the countryside outside of Paris, surrounded by artists. My parents’ friends were intellectuals and my friends’ parents were farmers. I was in touch with materials and the people who worked with them in the rural, familial, artistic environment where I grew up. I took full advantage of this environment. My penchant for making things likely springs from my relationship with materials and the processes that are used to transform them.

TLmag: You have pioneered the use of certain materials and combinations of materials on different scales in your projects. Would you mind citing a few examples?

M.S.: I believe that the first time I applied my knowledge of carbon fibre in a domestic context was in 1985 with my chair Carbone, among other projects. My chaise longue Pi came out that same year. It was the first outwardly visible use of aluminium honeycomb in a piece of furniture. In 1998, thanks to the use of digital programming and a composite material, I completed l’Armoire using a single sheet. Between 2007 and 2014, Marc Ferrato and I created three black, silicon carbide mirrors for the FAR project.

TLmag: Your form of creative freedom is a freedom from the blank page and the obligation to create drawings for commissioned works. Do you still feel that you are truly a designer? Is yours an artistic process, similar to the process behind installations? Or does your process instead respond to the need to accommodate a variety of intentions and uses? Here I am thinking of your MAP table, which was recently acquired by the Museum of Decorative Arts in Paris, and your silicon carbide mirrors, Black Mirror, Soleil noir and FAR.

M.S.: What distinguishes a piece of furniture from a piece of art is the title that precedes it. For example, if a piece of furniture is entitled “table,” you immediately picture the archetypical table. You imagine the original, primitive model of a stand that sits above the floor. Art is artifice whereas design is the material expression of reality. Nothing could be farther from a chair than a painting, text, play or film. The material side of art is a surface that hides the true content, the subject to be contemplated and interpreted. In contrast, the only thing a chair reveals is the chair itself. Not to mention the fact that if you sit on it, it becomes invisible. In the end, are chairs not made to support our bodies and are other objects not intended to hold or contain our belongings? If that is design, then I am a designer.

TLmag: Tell me about five pieces you have designed that are part of your daily life in your home or studio, in other words, five pieces that you have domesticated, so to speak.

M.S.: There’s the MAP table made from anodised aluminium modules, the Manière Noire shelving unit made from carbon fibre sheets, the Artefact coffee table in hollowed-out quartzite, the GlassGlass table with glass tubes for legs, the end table Bing One, which is 120 kilos of moulded crystal, and lastly, there is the 2000 Cork chair, whose frame and seat are made of cork. 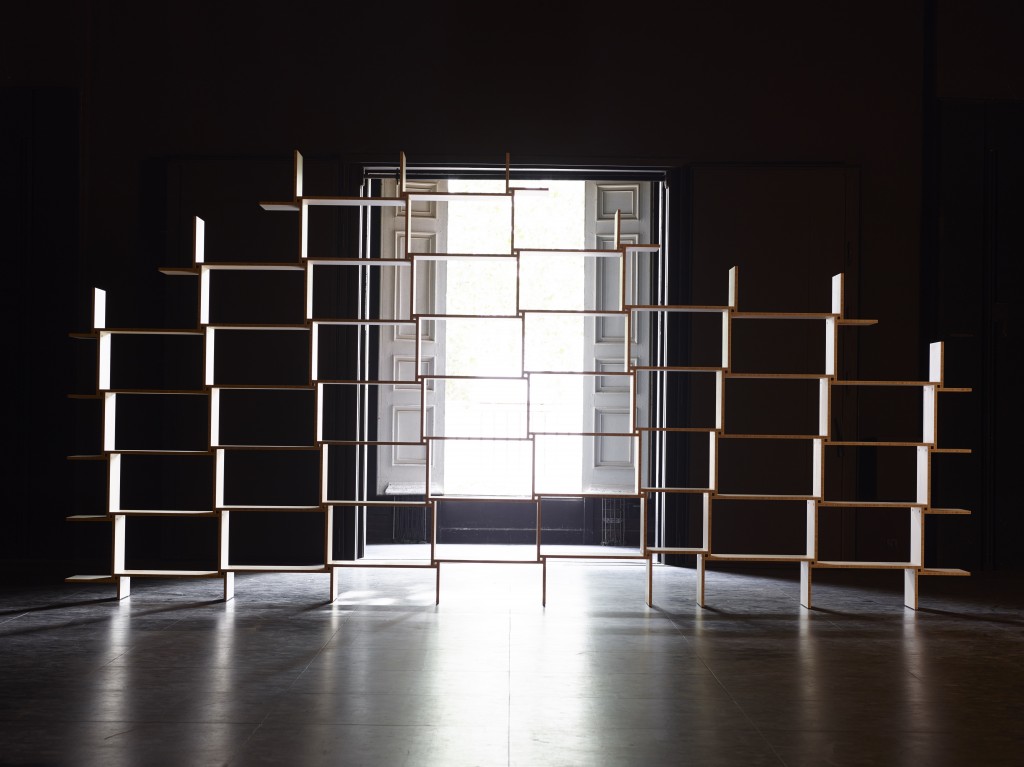 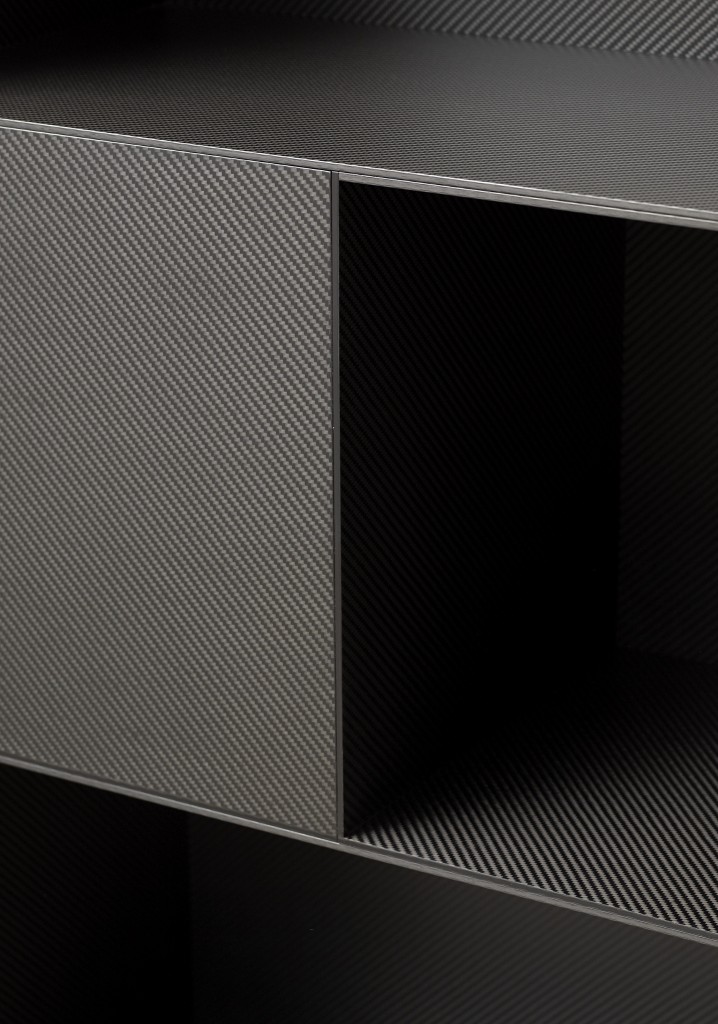 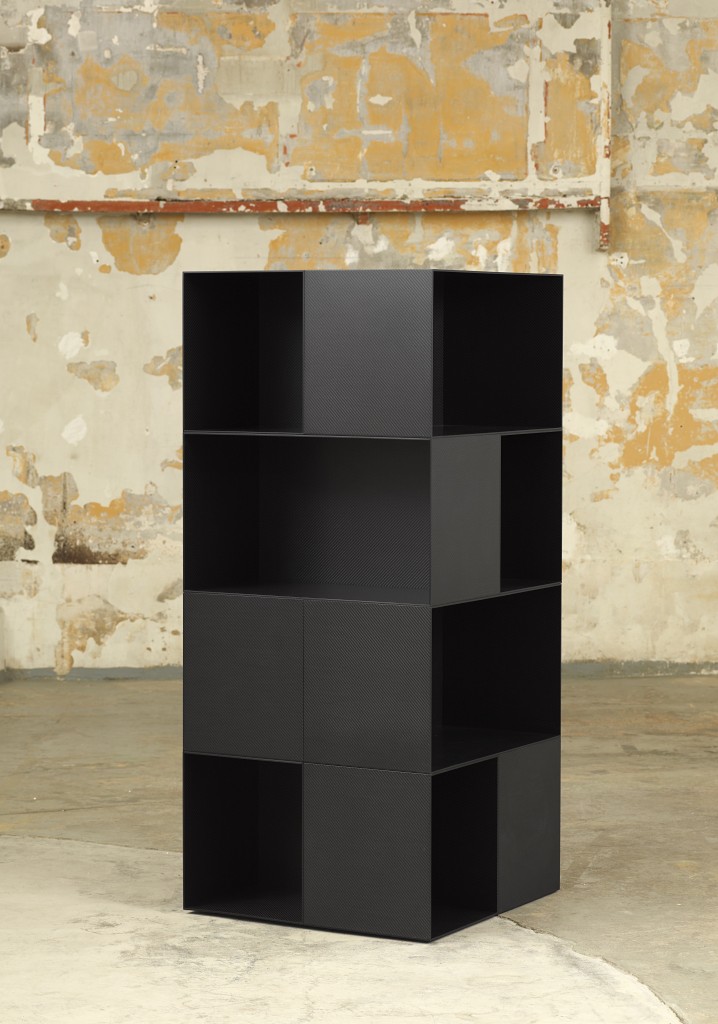 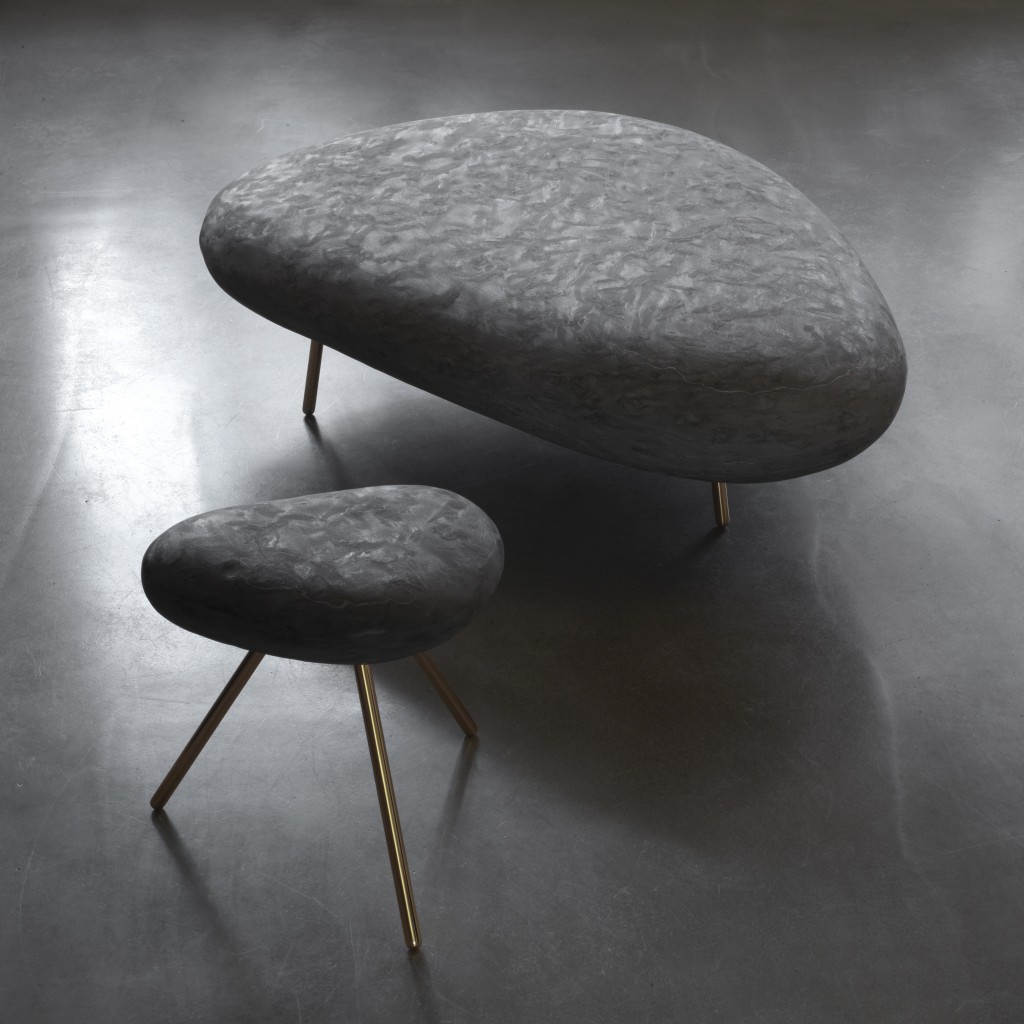 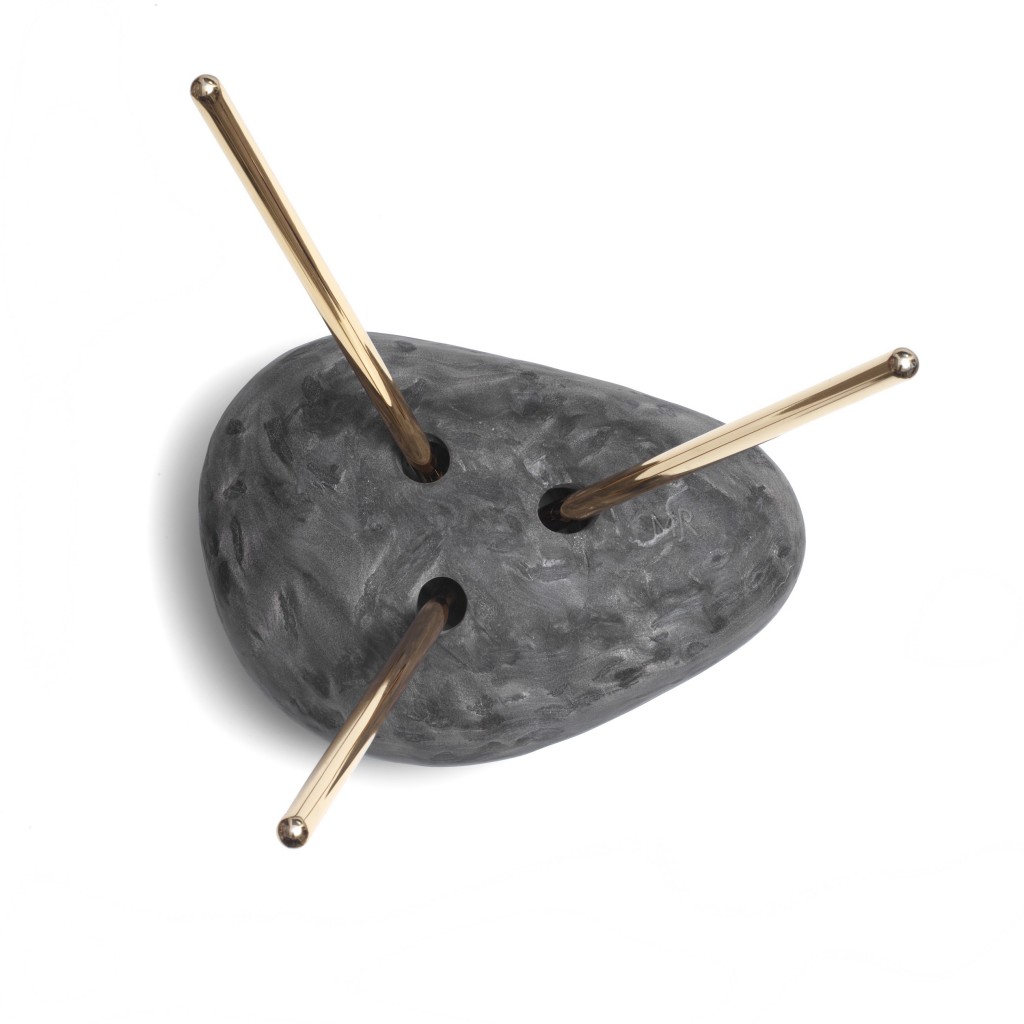 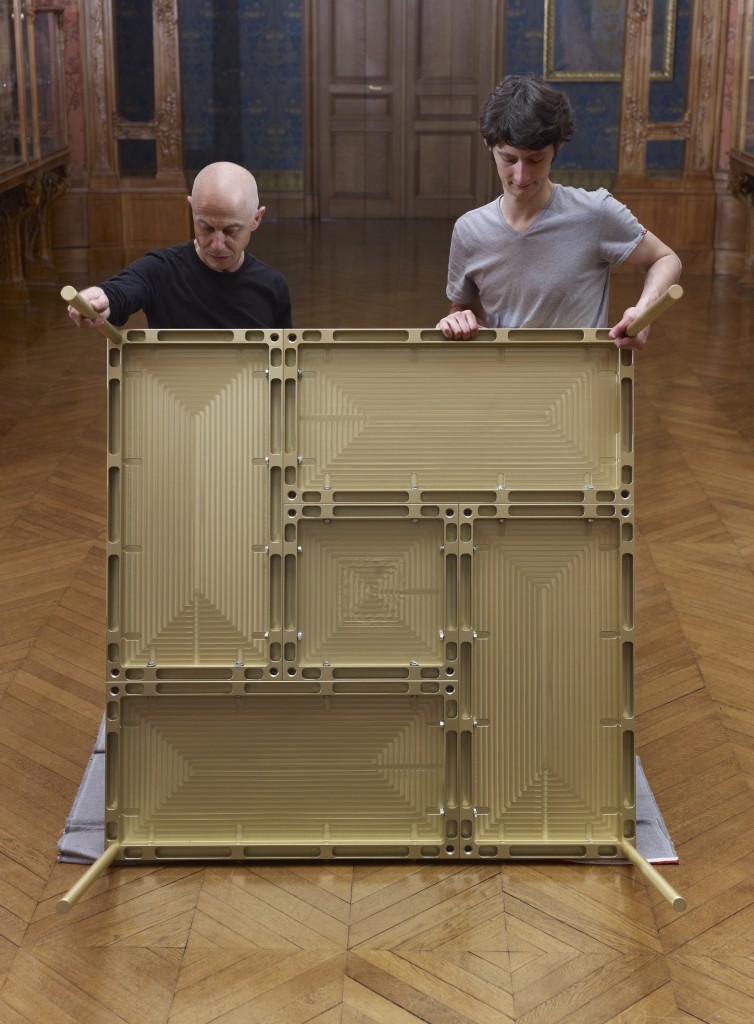 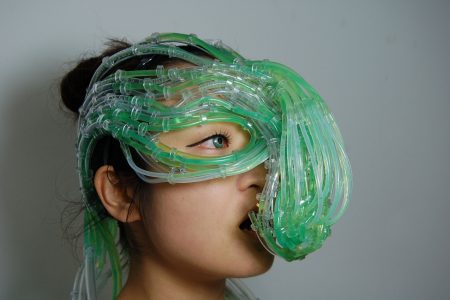 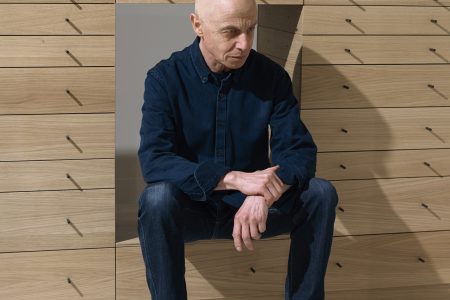 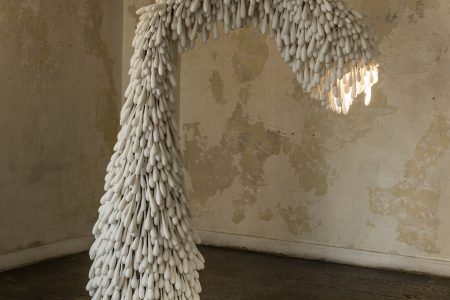 Galerie Armel Soyer shows Olga Engel’s work from March 20 to July 26. The presentation gives a good overview of her work, that plays with textures.