Southern Guild and Friedman Benda present iThongo by Andile Dyalvane, premiering in Cape Town on 10 December, 2020 and in New York City on 3 June 2021. An extensive collection of sculptural ceramic seating, iThongo is Dyalvane’s fourth solo exhibition. In homage to his ancestors, the work will travel in its entirety to Dyalvane’s rural homestead in Ngobozana, Eastern Cape, where his family and extended community will have the opportunity to view it for two days in November (21-22) before it is shown in the galleries.

iThongo, meaning “ancestral dreamscape” in Xhosa, refers to the medium through which messages (uYalezo uLwimi lwabaPhantsi) are transmitted from the ancestors. As such, it is an essential energetic link between the past, the present and the future, and the vital connection that fuels Dyalvane’s artistic practice and spiritual being.

The artist states: “My intentions with developing an extended body of work under the title iThongo is to highlight a gathering of dreams, seated in the soul, held by the spirits of our ancestors. Symbols are visual tools harnessed to more effectively impart meanings within messages – codes, if you will – that aid stories. The language of dreams is symbolic and therefore realised as uyalezo, messages from our ancestral spirits.”

iThongo will comprise 18 sculptural stools, chairs and benches, exhibited in the custom of Xhosa ceremonial gatherings, in a circular arrangement around a fire hearth and herbal offerings. Hand-coiled in terracotta clay, their voluptuous, rounded bases give rise to sculptural backrests stretching up to almost a metre tall. The intricate form of each is based on a single pictogram or glyph from a series of close to 200 symbols that Dyalvane has designed to denote important words in Xhosa life – such as entshonalanga (sunset), igubu (drum), umalusi (herdsman) and izilo (totem animals) – and which also relate to the natural world and more universal human themes and concepts.

Dyalvane’s symbolic lexicon has been an ongoing project, born of his interest in preserving traditional Xhosa knowledge, cultural practices and language. The symbols began as calligraphic ink drawings that he has codified over the years, dating back to the work he produced for his ground-breaking solo show at Friedman Benda, Camagu, in 2016. Their debossed forms also emerge from and dissolve into the sculptures’ clay surface, an effect created using tools such as carved stamps and linocut tiles. His coded language thus becomes embedded into both the form and the skin of each piece.

Taking their inspiration from both Dyalvane’s personal memories and various African artefacts, the seating objects are low, sitting close to the earth – the ground revered as an ancient portal for ancestral communion. Their forms are curved and spherical, echoing the traditional rondavel structures and kraal enclosures in which livestock are kept. Circular geometry is believed to facilitate a free exchange of energy in Xhosa spiritual practices (as it is in many other belief systems), in keeping with the organic shapes found in nature.

This will be a major exhibition with timely relevance and profound cultural significance for Dyalvane, extending outwards to his OoJola clan, the Xhosa people, South Africans of all races, and Black people of African descent. It will be accompanied by a short documentary film and a catalogue containing academic texts shedding light on the exhibition’s spiritual aspects, both made possible with the support of BMW South Africa.

A series of interdisciplinary collaborations that Dyalvane initiated with other artists further broaden the exhibition’s scope.  Sound healer and musician Nkosenathi Ernie Koela produced an immersive composition combining traditional instruments and sounds created by the artworks; Sisonke Papu, an Umtata-based poet, traditional healer and co-founder of the ISPILI Network in the Eastern Cape, wrote about Dyalvane’s use of symbology for the catalog; and textile artist Onesimo Bam made a collection of garments hand-painted in the indigo dye for him to wear for the ceremonial presentation of his work to his village and to gift to his elders. 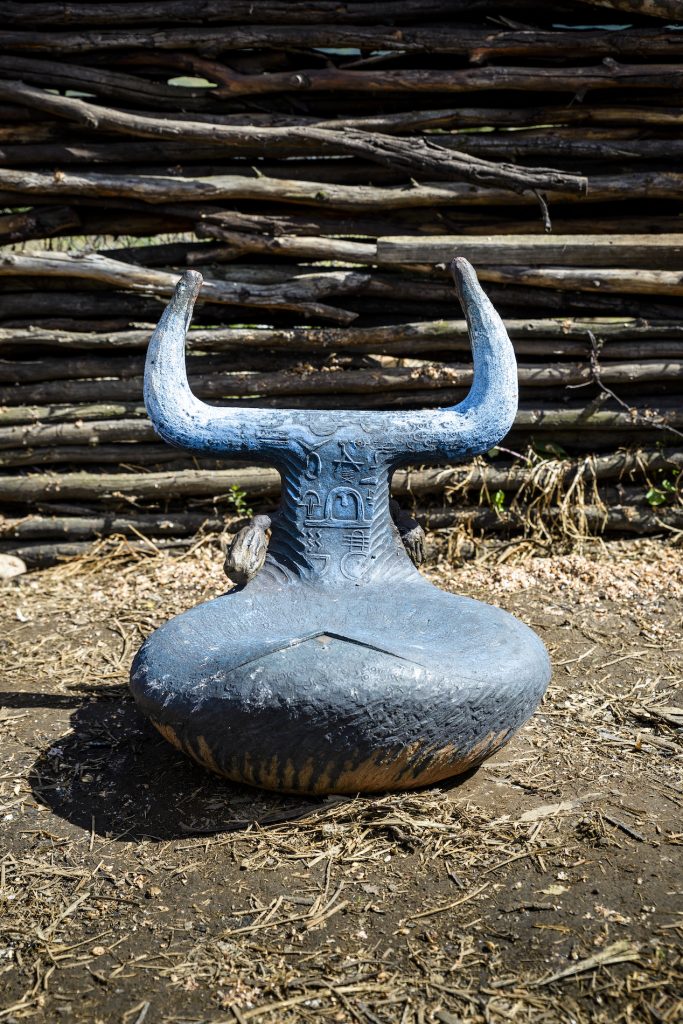 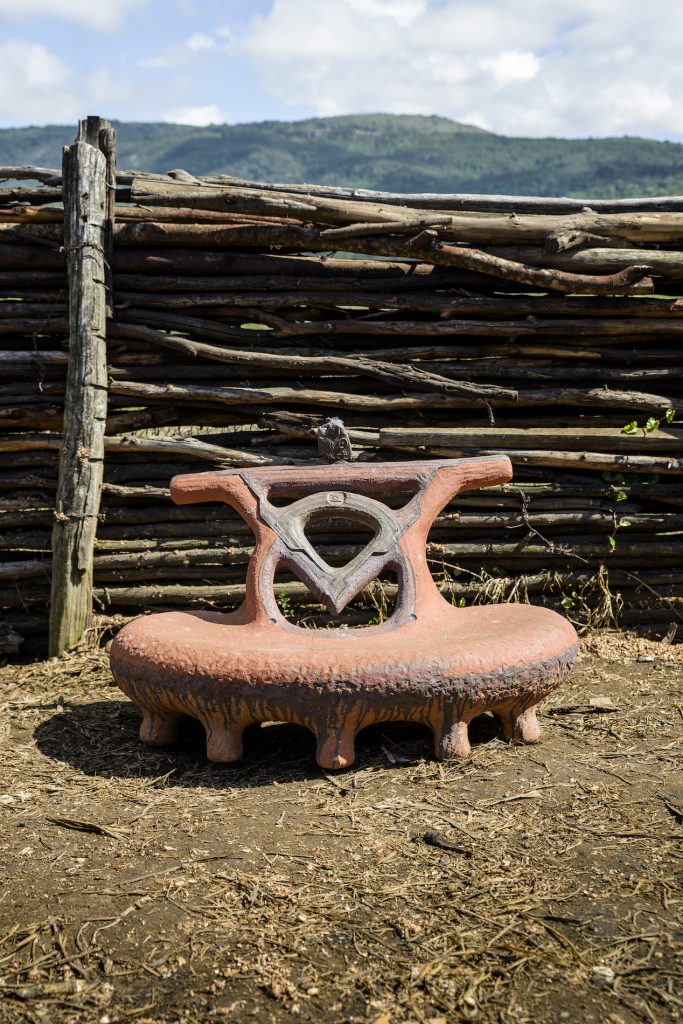 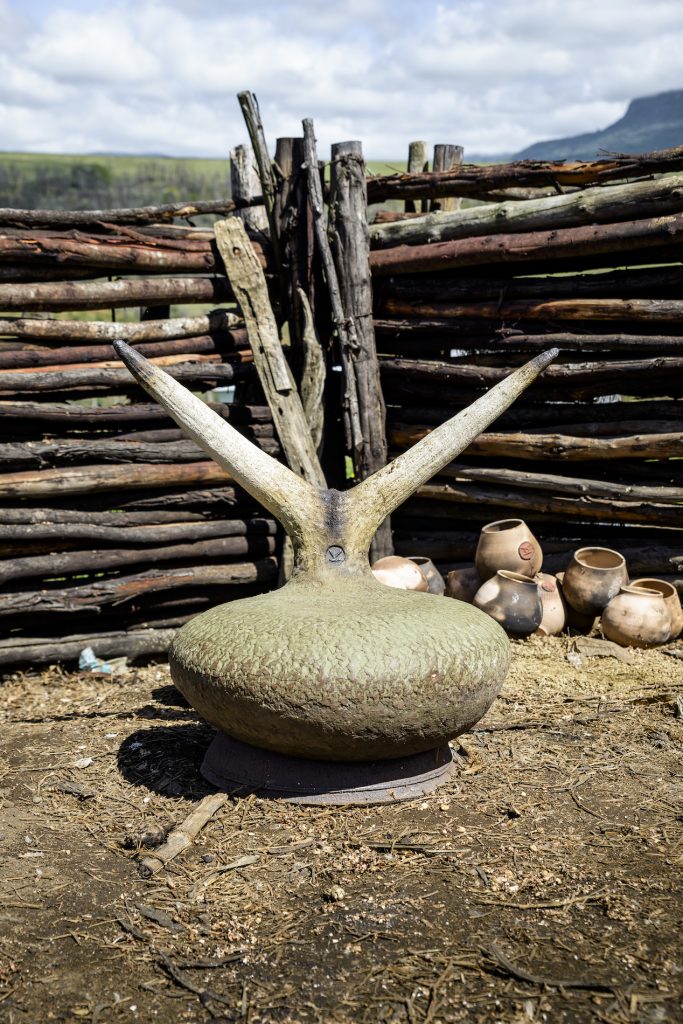 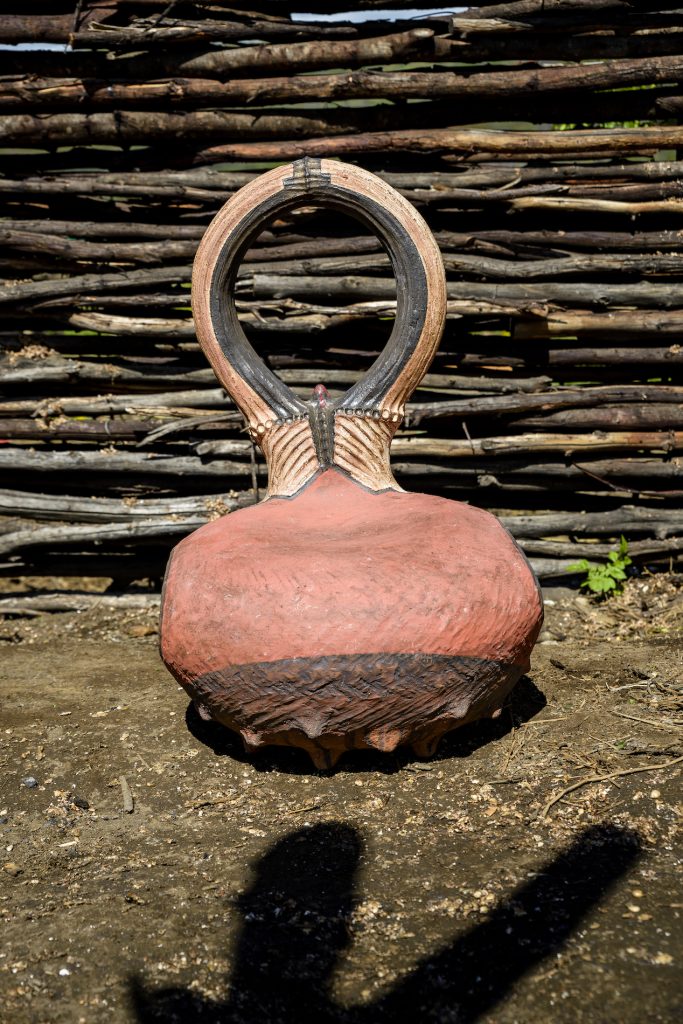 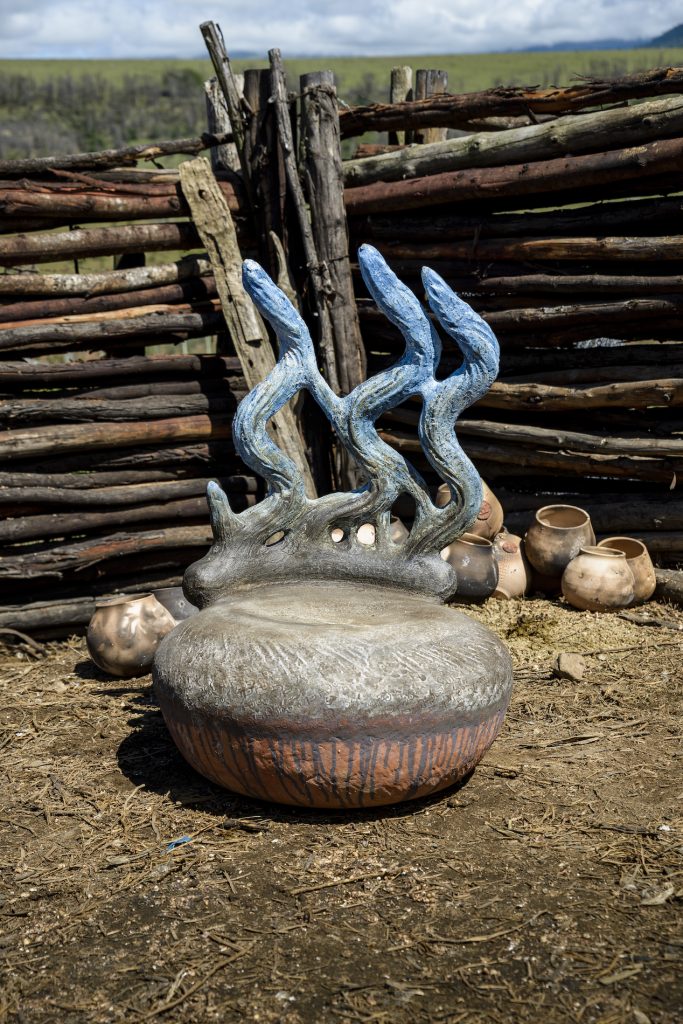 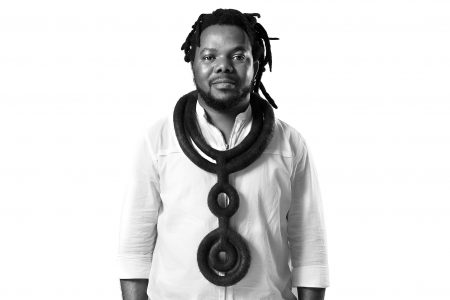 South African ceramics artist Andile Dyalvane’s intuitive mastery stems from a lifelong fascination with the medium. First stumbling upon the viscous qualities of natural clay in the rural setting of his native Eastern Cape, the talent went on to become a leading figure of the Cape Town creative scene. 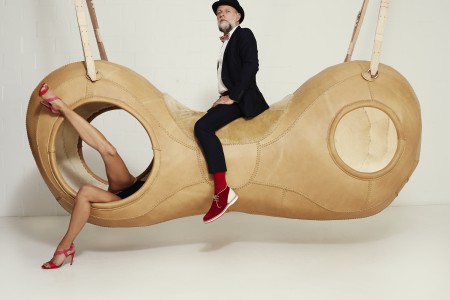 Southern Guild’s newest collection, showing at Design Miami/Basel from November 30 to December 4, is deluxe African Fantasia at its best.